Start of a New Trip - Off to Honolulu

Getting away always seems to provide challenges. This time round, it was a car causing problems. It had been sitting on the street without WOF or rego so long that the Council was showing an unhealthy level of interest so I had finally bit the bullet and listed it on trademe. I was heartened that it had two bids and met reserve within hours of going live and finished with quite a respectable closing price. I hadn't allowed for the buyer: the auction closed very early on the Monday morning and I was leaving on the Wednesday evening. The buyer finally showed up at lunch time on Wednesday, or rather three generations of bogans did. Their mode of conveyance was some sort of shiny shit-brown Nissan, which had an exhaust several inches in diameter and a tendency to stall. Usefully this car was able to jump start mine, but it stopped several times in the course of doing so - the racket had the neighbors out in the street seeing what was going on. It was only once my car was running that the buyers decided that they would beat me down on price: one fellow pulled some cash from his pocket and said it was all he was paying and all he had with him. Another said he had no fuel so couldn't get more money and that a fourth member of the family had been the buyer and had lied to them all about how much he had bid. Yeah, right. I stood my ground and refused to go for anything less than the bid price. They ultimately left, but stopped down the road: loud conferring could be heard, but they did not return. I did get a text later in the day, saying they were back at my house ready to do the deal: I even sent a friend to pick them up but they had vanished by the time he got there. The one upside of the episode was that, as they had got the car running, I was able to park it off the street for the two months I'll be away. As it happens, that became unnecessary, as I had a back-up bidder who completed the purchase without any fuss.

After the dramas of the day, it was a relief to get on the late flight to Auckland and check into my hotel. I would have preferred having some dinner, but the only things open were a couple of McDonalds with limited menus. I had to make do with cashew nuts and L&P: I thought I had beer, but when I got it to the counter, I was informed that booze sales had stopped at 11:00. When I awoke, I was very pleased to see that Ace Rentals were visible from my hotel: after a very short walk, I was on my way. The plan was to head out to my hairdresser in West Auckland and take a nice scenic drive to Cambridge. I was thwarted on almost all counts. I did get to West Auckland, but my hairdresser was absent. I did get to Cambridge, but it rained the whole way, so heavily at times I could barely see the road, let alone the scenery. I felt lucky, however: in the bank in Waiuku, someone mentioned that a tornado had struck West Auckland and killed three people. Cambridge was a very pleasant stop over: I checked out all the eating options, and some looked very nice indeed. It confused me that all offered duck, until I noticed a sign sating that about 90% of our ducks are grown nearby. Anyway, my dining choice surprised me: one particular place was far busier than any other, and busier than any of that sort of place I have seen: I went in to a roast meal shop and ate up large on roast chicken, roast lamb and perfect roast potatoes. Before leaving in the morning, I came across a great bookshop, Wrights and was very happy to leave clutching a Christmas present.

I spent the next few days with family, before returning to the airport hotel I frequent (the Ibis Budget). This time round, I was in plenty of time for dinner, and tried the "gastropub" in the base of the hotel: the food was OK (the pasta was somewhat rustic) but through a failure to renew the liquor licence, I couldn't have anything to drink with it. Ah well, Air New Zealand made up for it. I was on a basic seat ticket, which meant no food and carry-on luggage only (after all my efforts to get myself within the limit, they didn't even look). This must have been something of a novelty, as the steward covering my part of the plane slipped me a couple of beers and fruit salads, most apologetic that he couldn't do more. Another fellow issued me with a ham and cheese sandwich. These little gestures and several hours of a most excellent HBO drama, Newsroom, made the flight go by in no time. I had been warned that it could take several hours to clear Immigration and Customs in Honolulu, but we were the only flight: since I only had carry-on, there was no-one at all in the Customs area when I went through. So I was on a bus into town by 9:00 - it dropped me near the hotel I had carefully chosen in Waikiki (it was the cheapest I could find and very reasonable - very basic aesthetically but roomy). 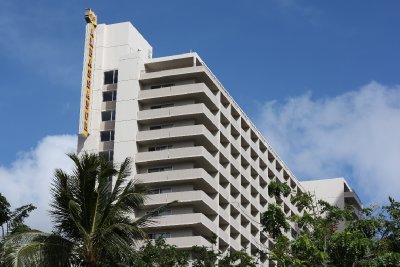 Finding something decent to eat was a bit of a problem, but then I found the cheesecake factory, which runs a pretty extensive regular menu. They were able to fix me up with a very pleasant pale ale and burger with a delicious amount of char. They seemed to have hundreds of styles of cheesecake as well, but I was no longer hungry.

Tuesday was the obligatory walk around Waikiki, its not really my scene 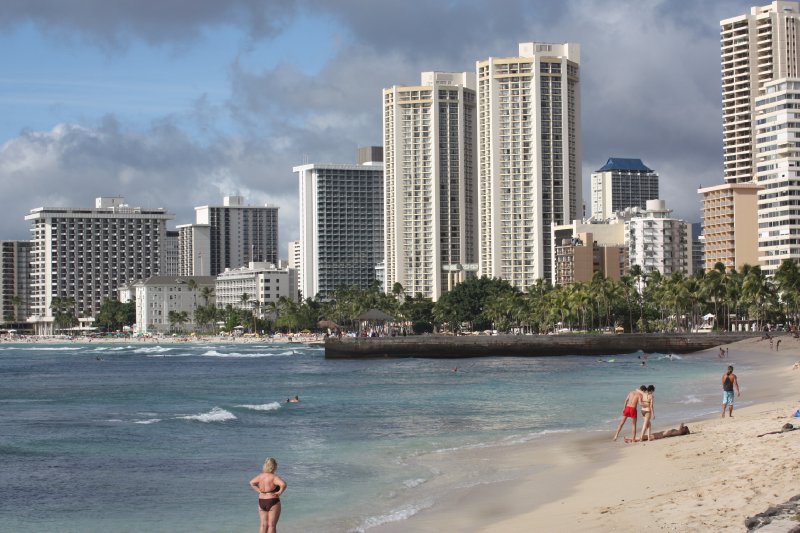 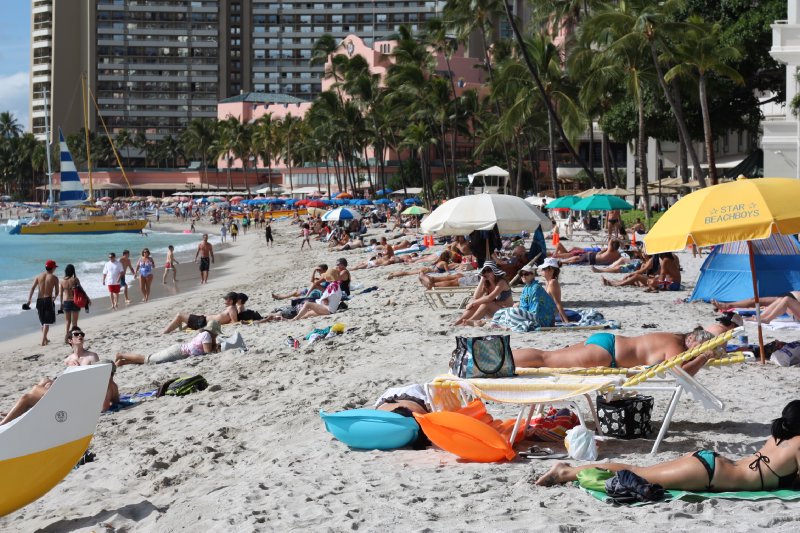 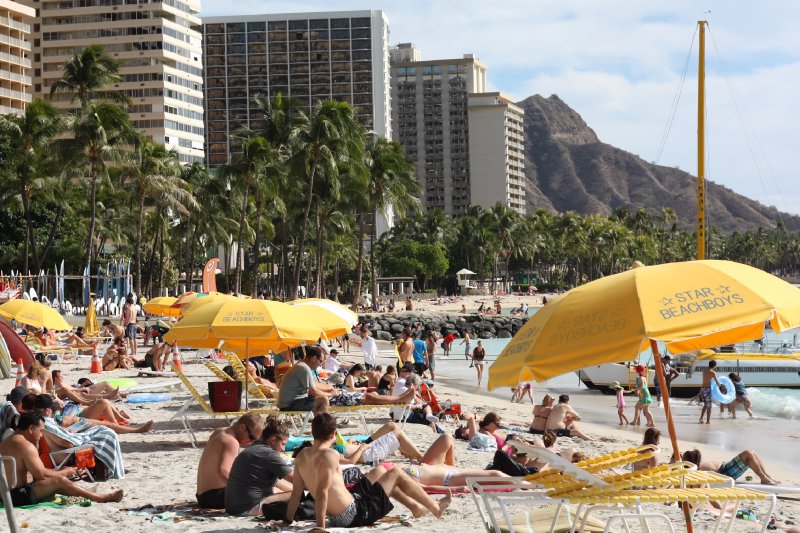 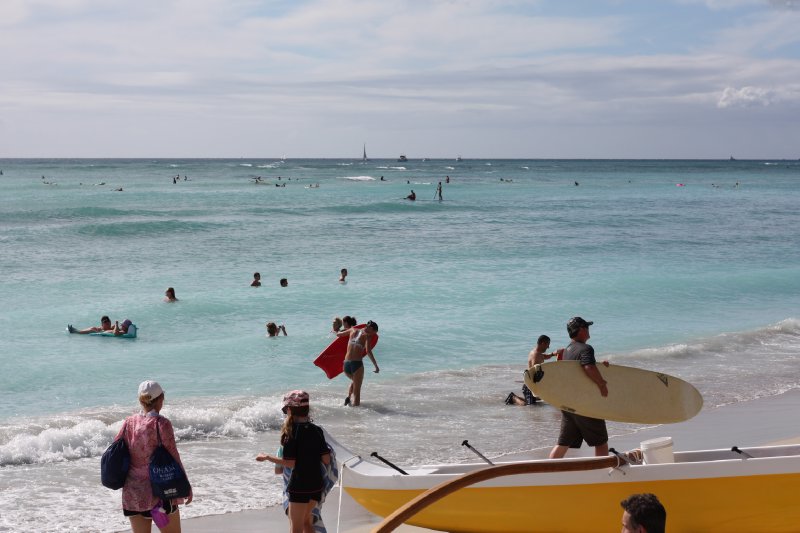 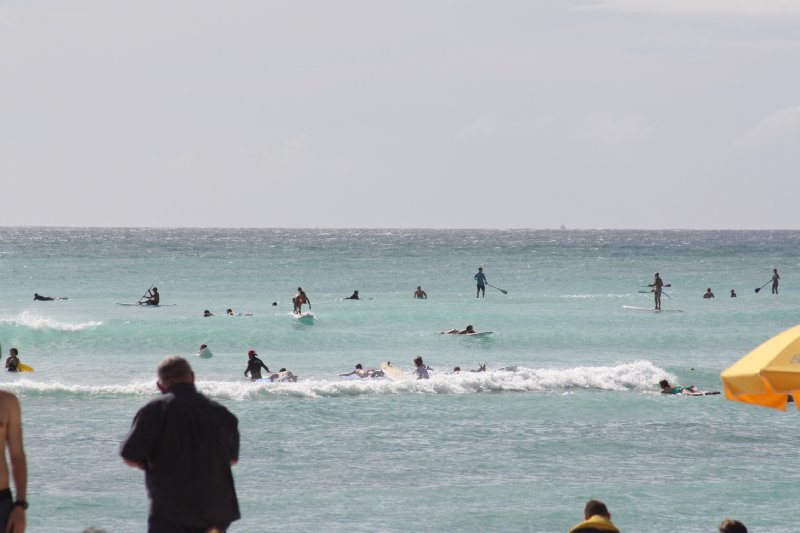 so I hoped there would be a collision further out, but they all drove sensibly 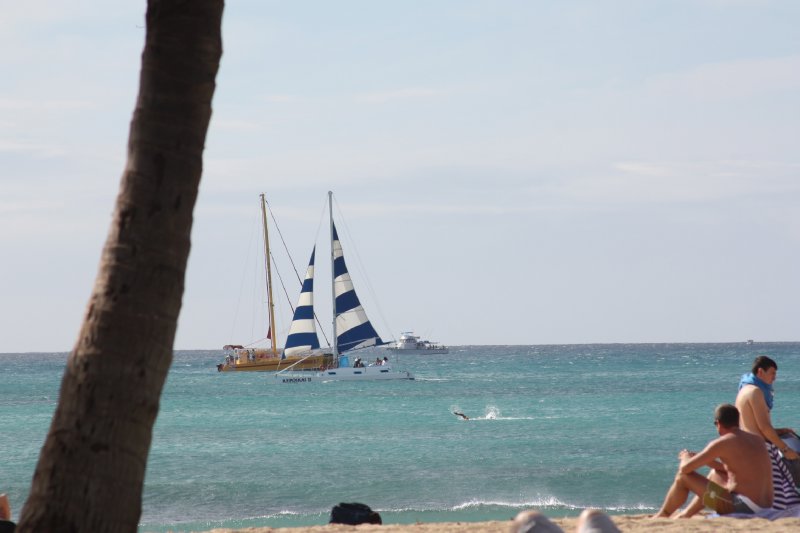 This did roll past and no-one claimed it 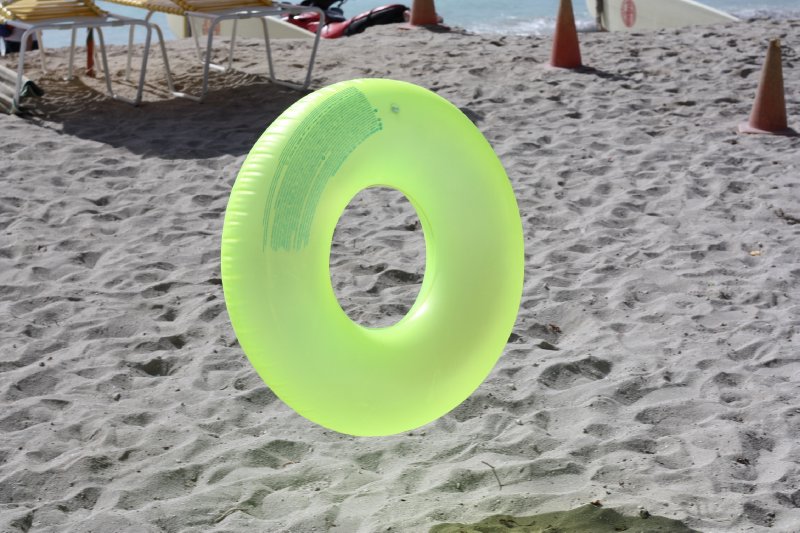 I could have had cheesecake for lunch, but I thought I should eat as the locals do, in a foodcourt - this is what they call BBQ chicken, the Pale Ale was OK 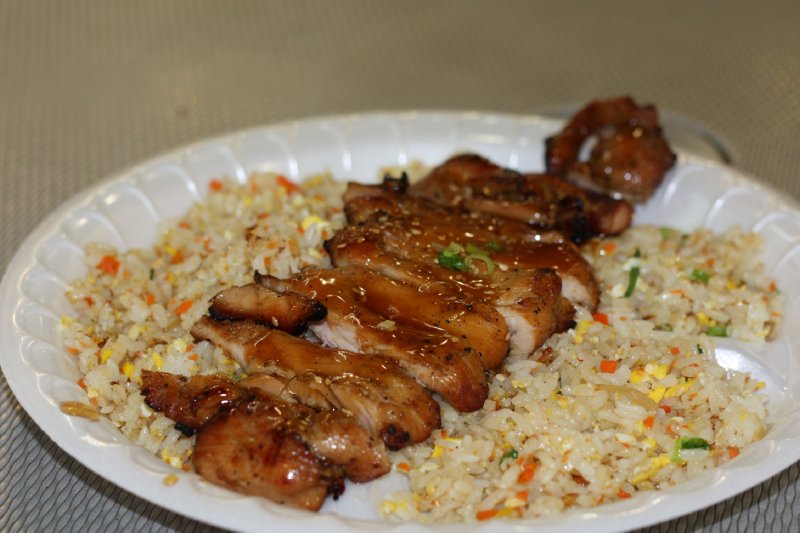 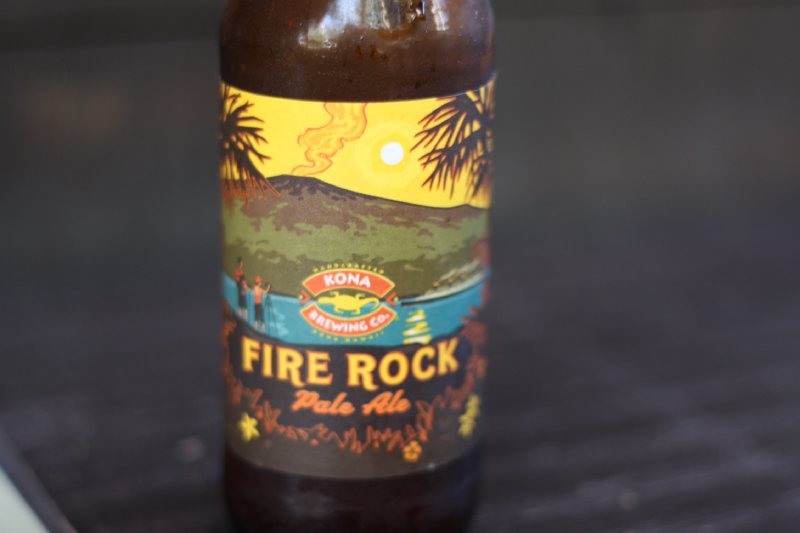 I had some company, but was worried he was just after my chicken so shooed him away 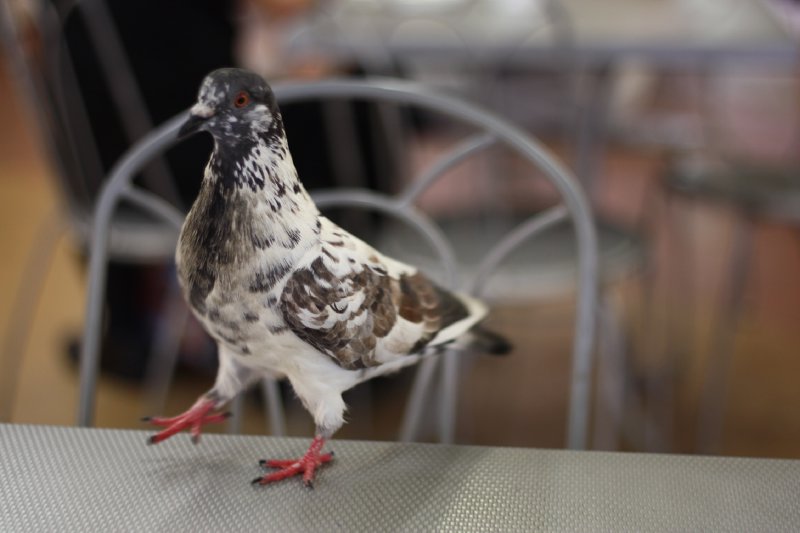 I walked out along the beach to Diamond Head 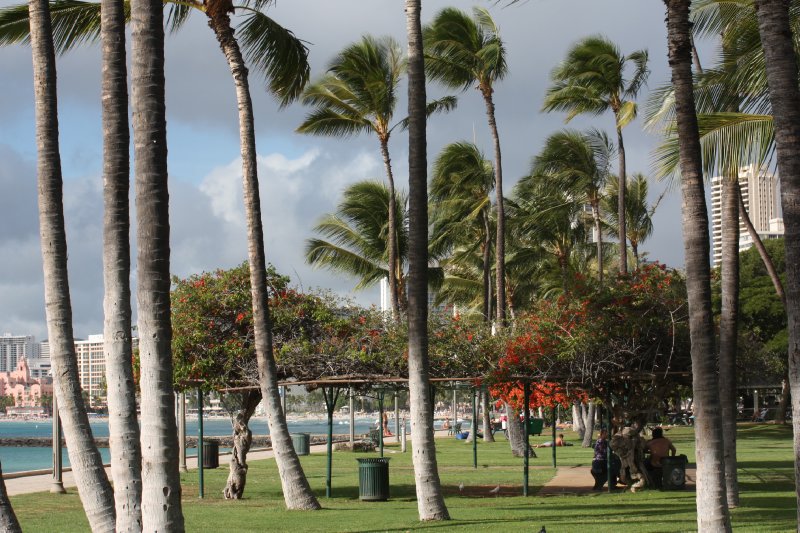 wandered the streets, spotting the weird 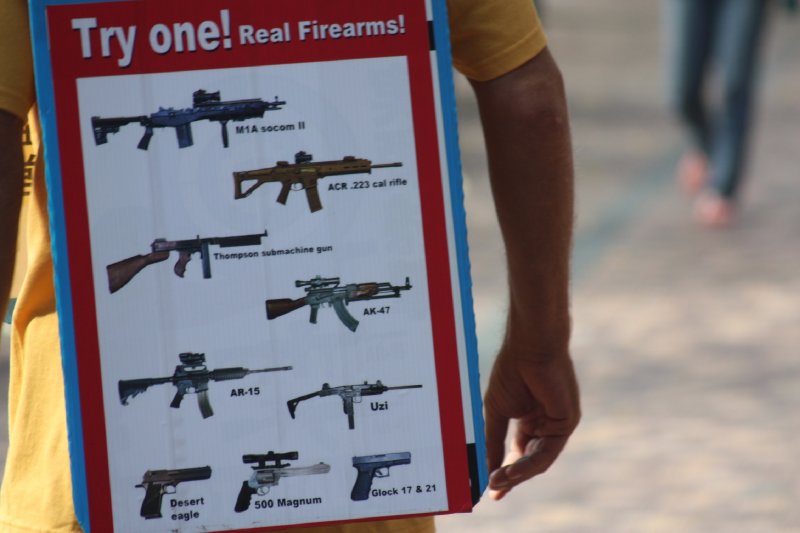 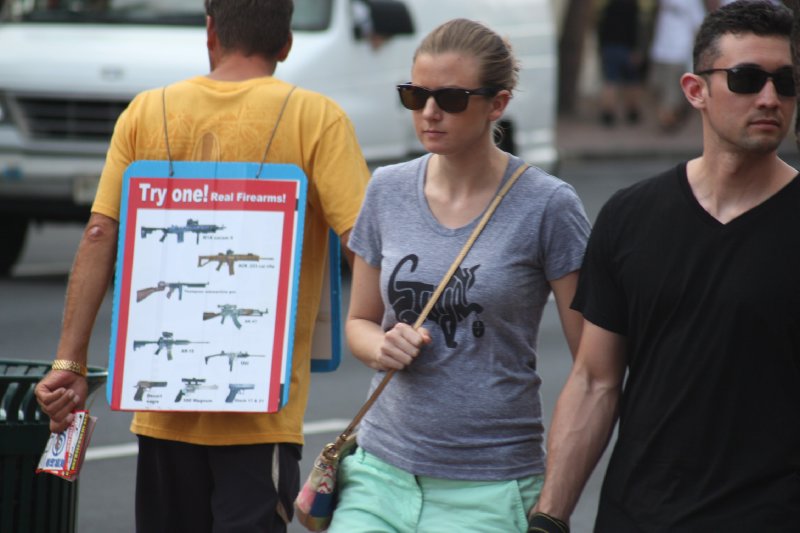 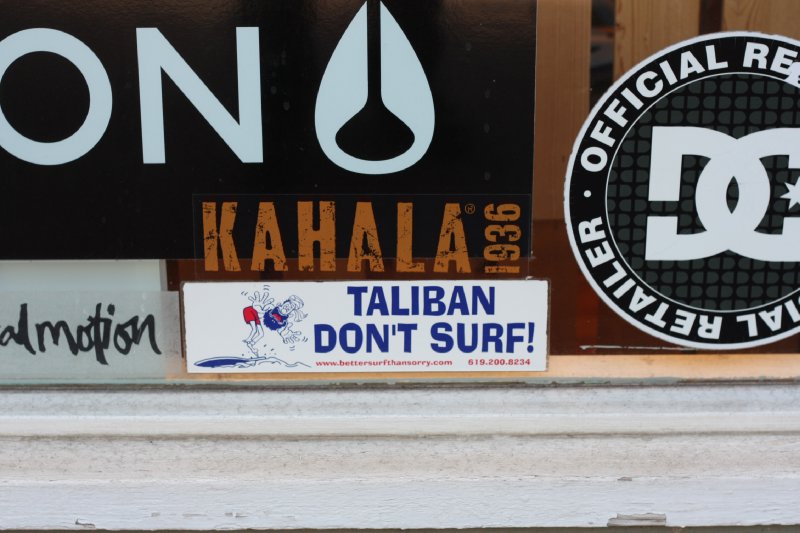 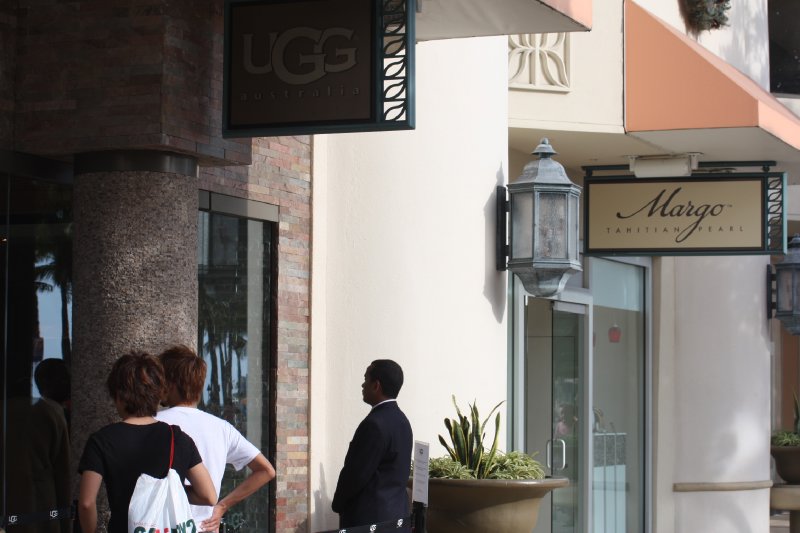 Who knew that a shop selling Ugg Boots in Waikiki would have a queue to get in and security to make sure they didn't? 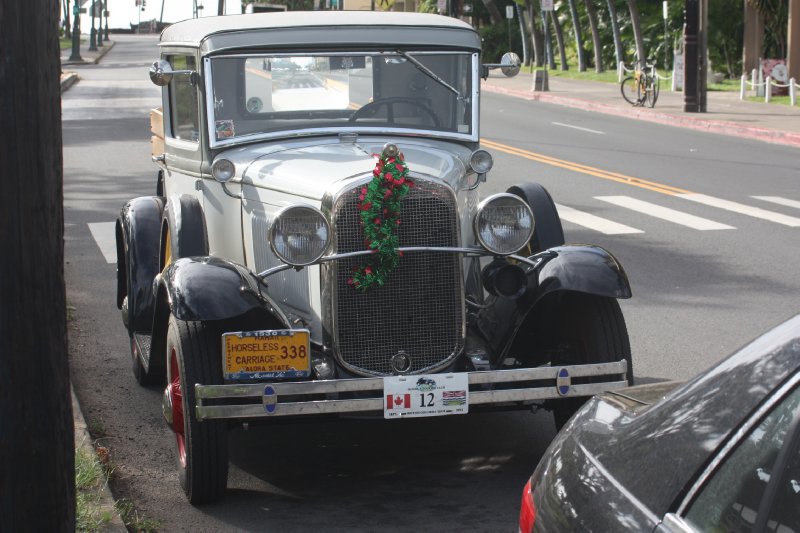 I probably could have stayed in the hotel for the few days I am here, but I really didn't want my visit to be all about Waikiki: I had actually looked very hard at staying Downtown but there are essentially no options apart from an expensive business hotel so I took the next best thing I could find - the HI hostel at the University of Hawaii. It was a couple of miles so I decided to walk, pausing to watch the various canoeists on the Ala Wai Canal: 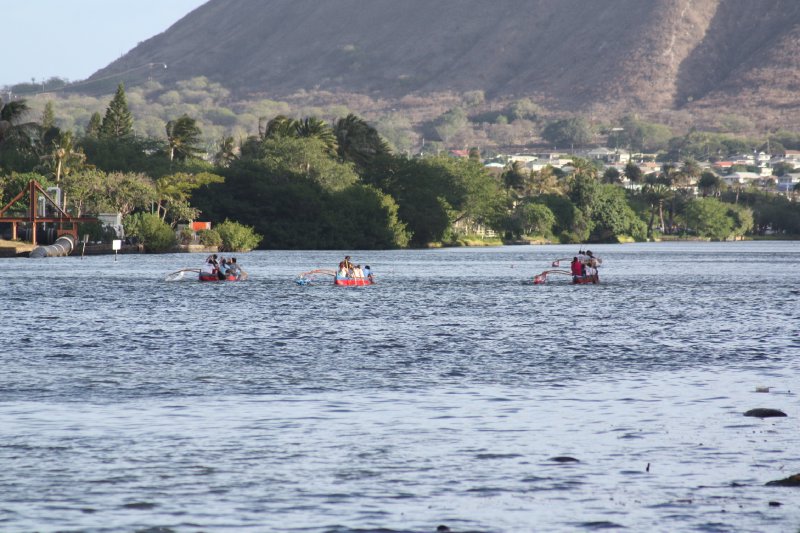 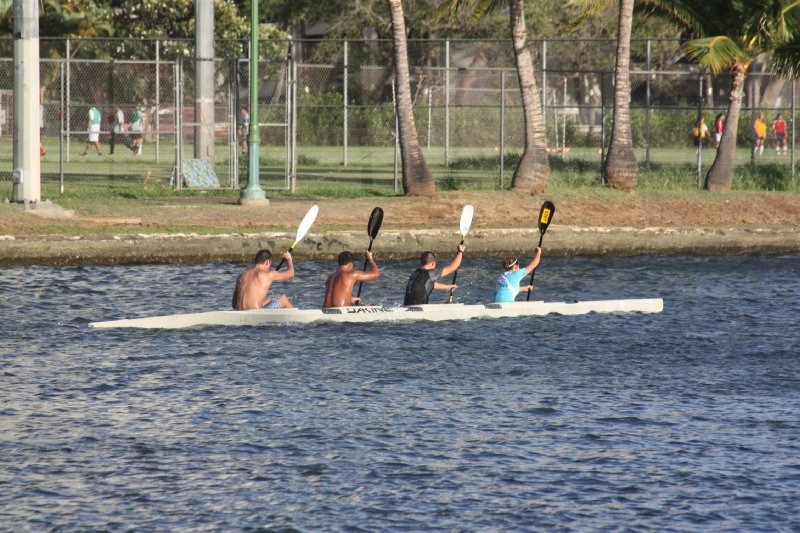 Getting there nearly killed me, however: just before the hostel, I encountered a tree which hung low over the footpath. My duck was not quite low enough and I took a spear to the top of the head. I couldn't really arrive at the hostel with blood pouring down my face, so spent quite a while mopping it up, holding my head and generally waiting for the blood to clot - the doc is worried my blood might no do so but I can assure him it does.

The hostel is a pleasant enough place, very small and a bit more restrictive than other hostels that I have stayed at, but the guy checking me in seems like a real gentleman. There's not much around it, which surprised me as it is embraced by the campus of UH Manoa, but the sole point of interest for about two blocks is a self-serve frozen yoghurt place - they couldn't even live dangerously and put ice-cream on the menu.

Since my time is quite short for all I want to see, I walked down to Ala Moana, the big shopping mall about two miles away, in the evening to check it out. Now, every Japanese Department Store I have been to has been a sober, meticulously laid out sort of place, often with giant food collection. The one at Ala Moana does things a little bit different: it has a beer hall, one with very cheap drinks (a dollar a pint if you're willing to drink Pabst - I wasn't so splashed out and spent two on my Asahi). 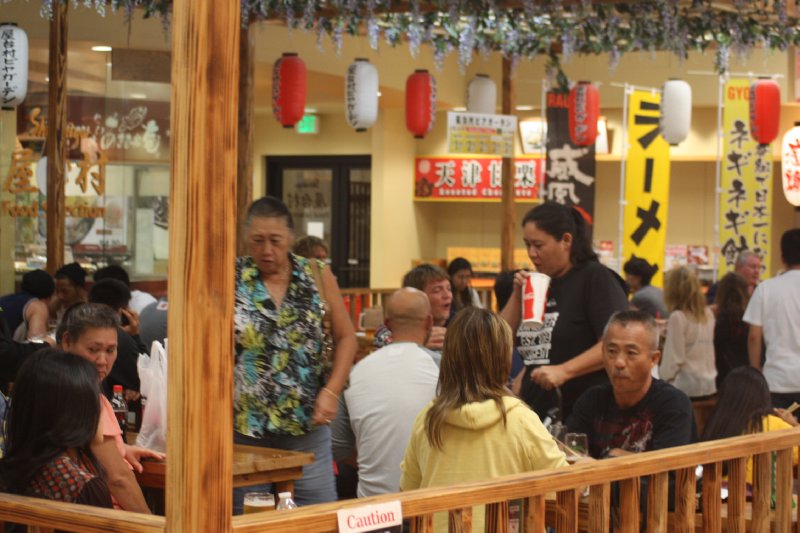 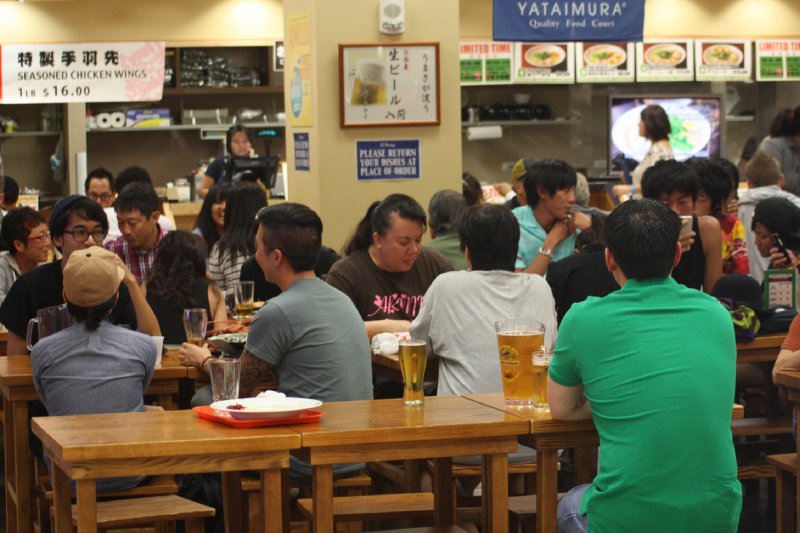 The place was packed - most had pitchers. In another section, they had a form of yard glass with a tap at the bottom. I did try to get a picture, but I noticed one thug dressed in a security uniform mention to another thug that I was taking pictures: the second guy came after me, so I decided I needed to be somewhere else. Fast.

Posted by NZBarry 00:40 Archived in USA

GREAT post, apart from the attack of the nasty tree!