A Tale of Three American Palaces

Hawaii had its own royalty since Kamehameha beat off all challengers and established the Kingdom of Hawaii in 1810. Although it was only destined to remain a monarchy for less than a century, several palaces were established around the various islands. Three were built in Honolulu (which did not become the centre of power until the days of Kamehameha III): one is now the Supreme Court of Hawaii (but I forgot to go take a look at it, even though I was keen to see the judicial museum which has been set up), until my very last evening, after it had closed: 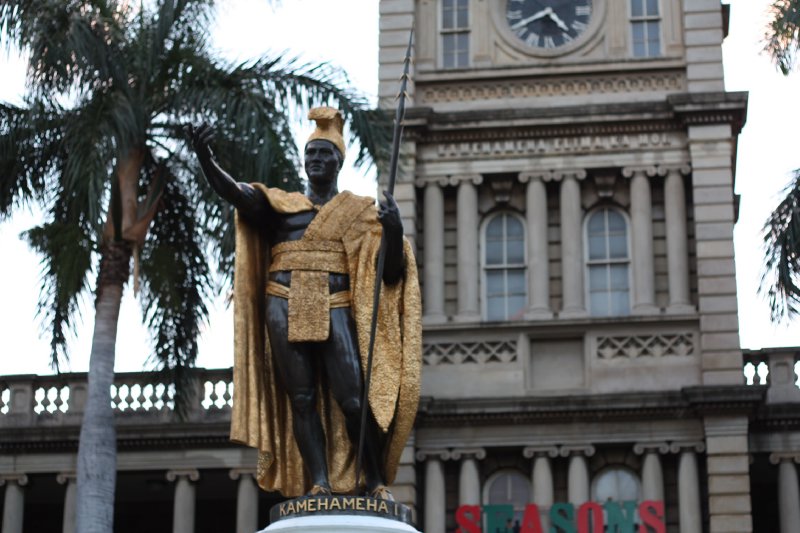 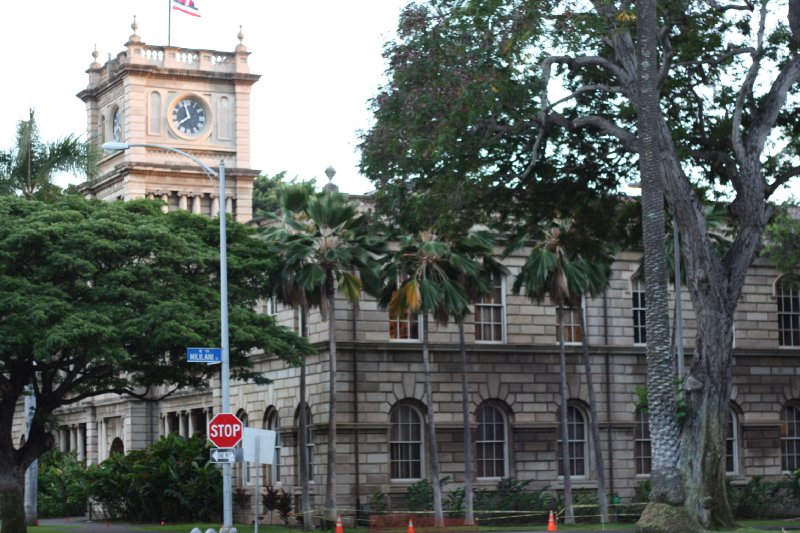 Another is a shopping mall, the Kings Village 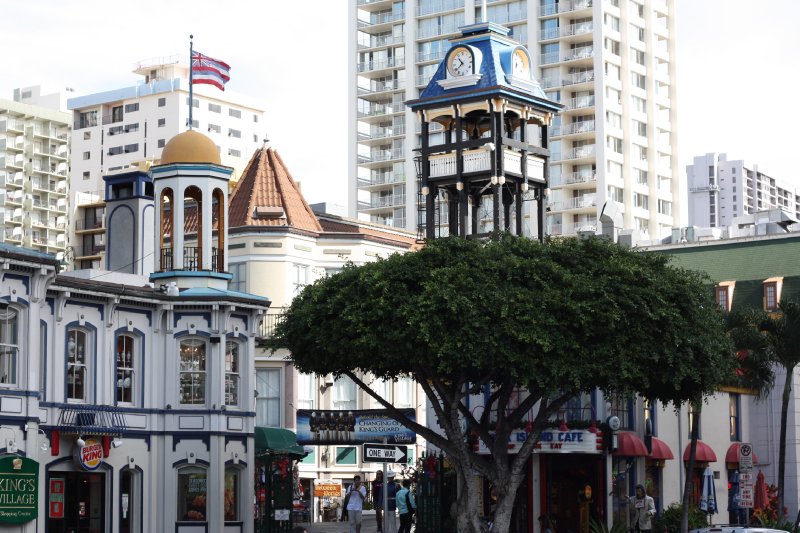 which even has a changing of the guard (although I'm starting to think the whole place is fake and was never a palace: there are suggestions on the premises it was but nothing I can find backs that up, instead there are references to it being a 1972 development). But there is a palace proper, the Iolani Palace 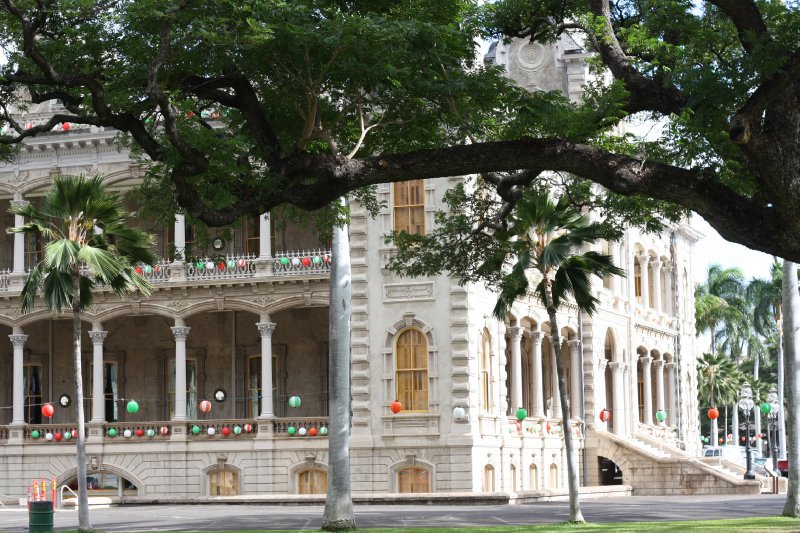 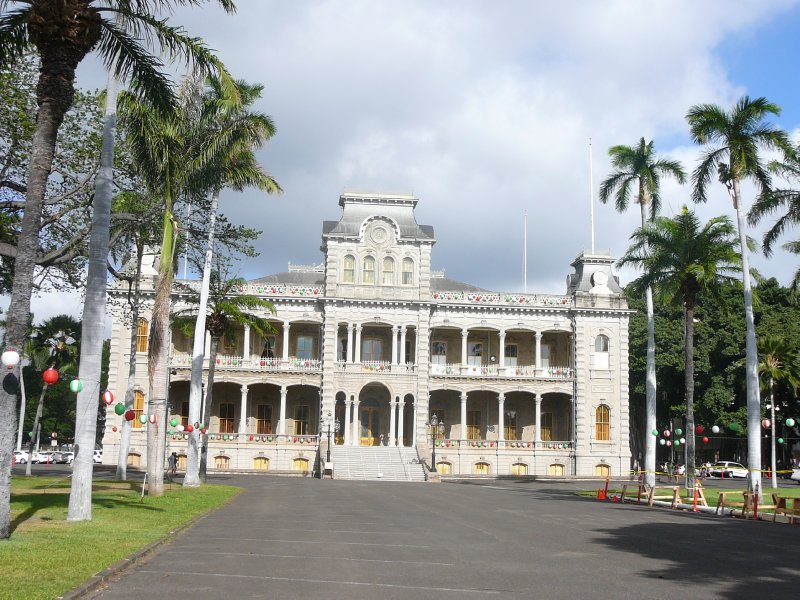 which was occupied by King Kalākaua and Queen Lili'uokalani. It was only built in 1882 and the monarchy lasted little more than a decade after that. It was ahead of its time in some respects 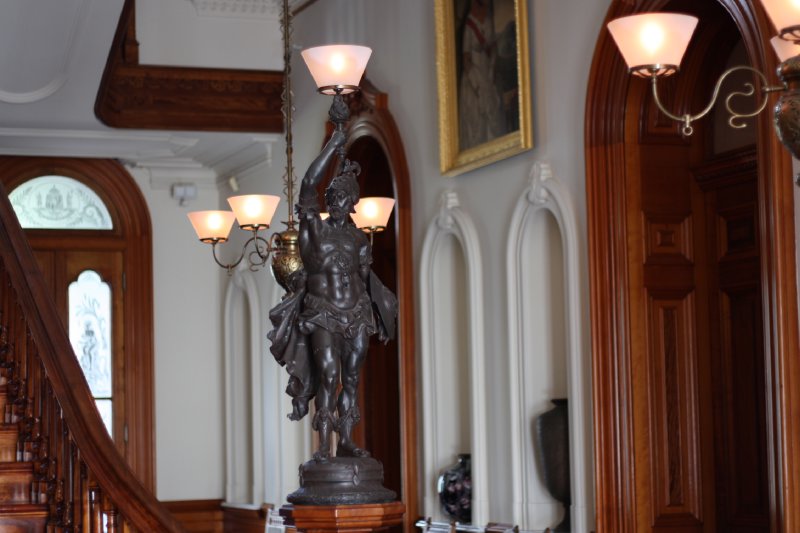 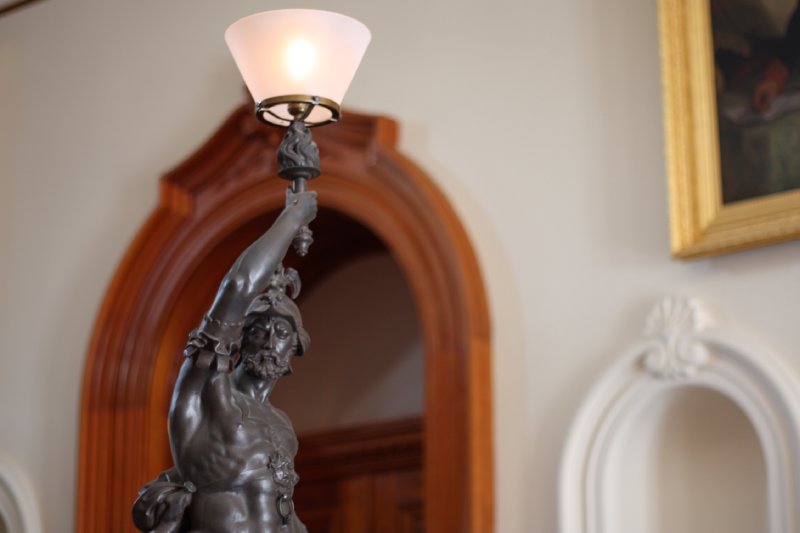 - for example, it had electric chandeliers before Buckingham Palace or White House even had electricity. This was a reflection of the King's curiousity: he met Edison and almost immediately installed electricity. Here, there were no switches: instead, people sat in the basement and worked the electricity supply. The thing that really startled me, having walked around the area for a few days and knowing how far from the waterfront I was, was hearing that when it was built the Palace was on the waterfront. After the Monarchy came to an end, the Palace was used as the legislature for some time. The project to re-establish the building in its original form certainly took some doing: it had had several dubious re-developments and pretty much all of the internal furnishings and furniture had gone, sold of at public auction over a hundred years ago. The building had to be re-floored, ceilings had to be re-plastered and its contents needed to be found: the project started in the early 1960"s and officially finished 2011, although some furniture is still wanted. It is looking pretty good 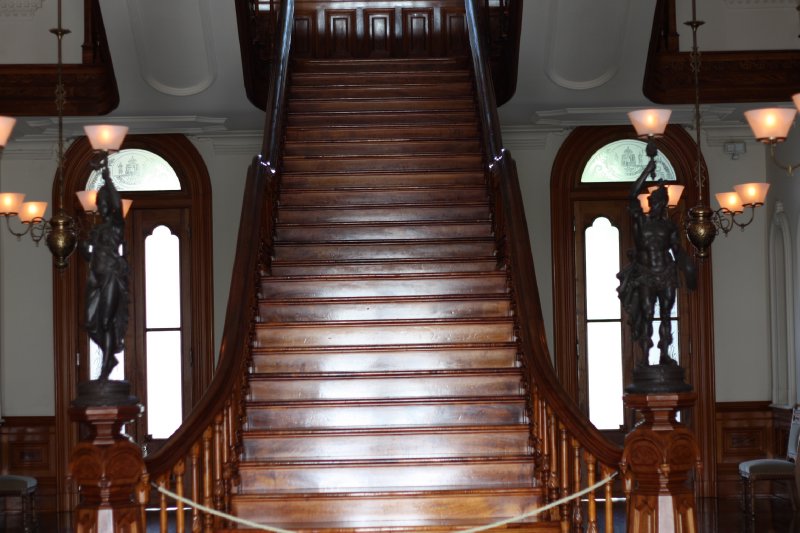 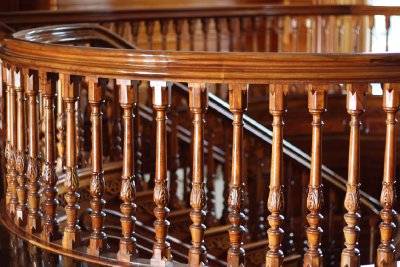 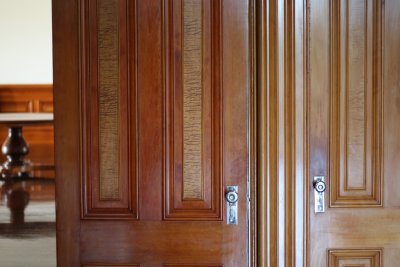 The King had a fairly active interest in music, he wrote the national anthem personally, so it is no surprise he had a dedicated Music Room 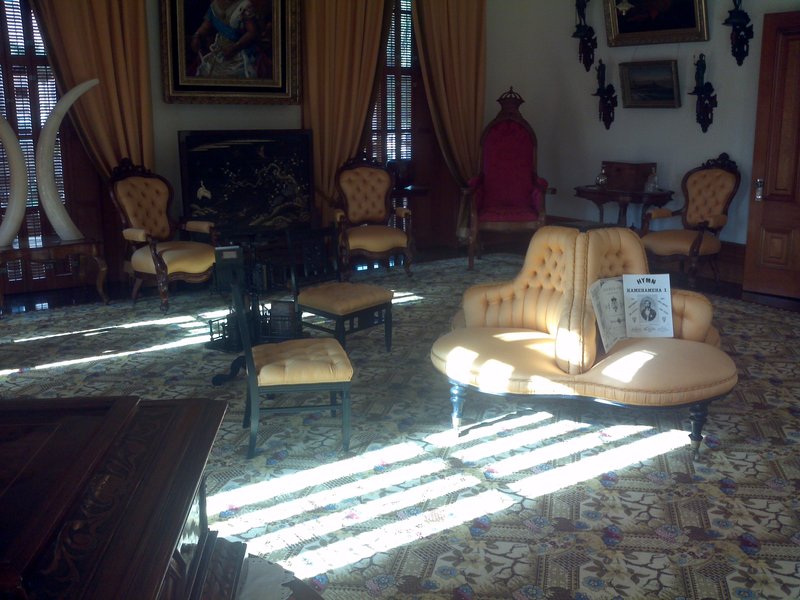 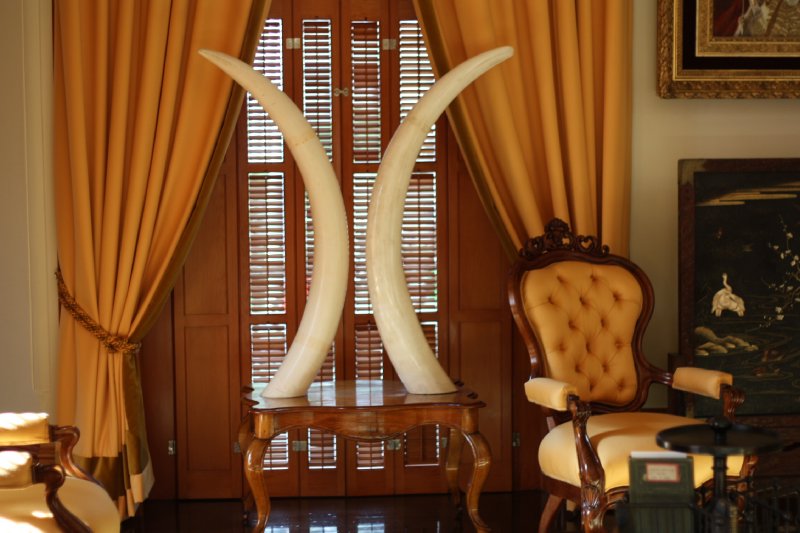 I liked the Throne Room, even though it was a bit spooky that both the King and Queen laid in state here 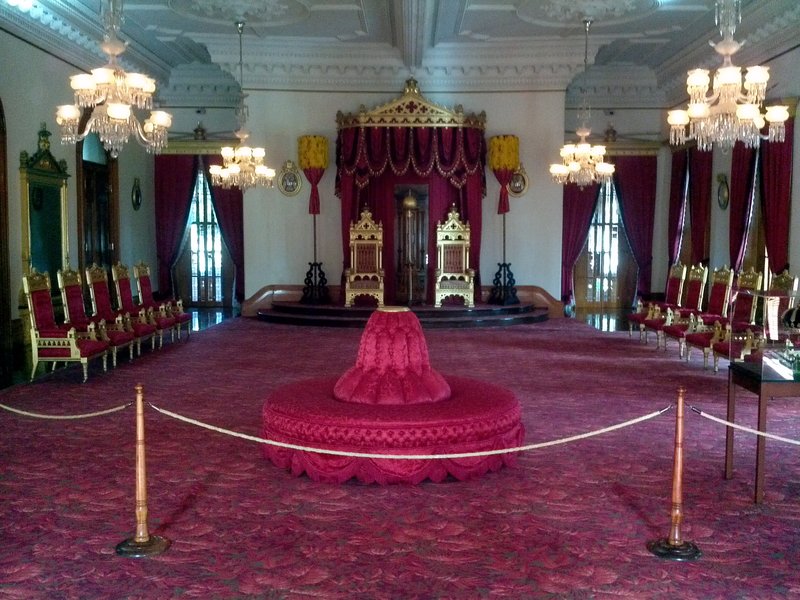 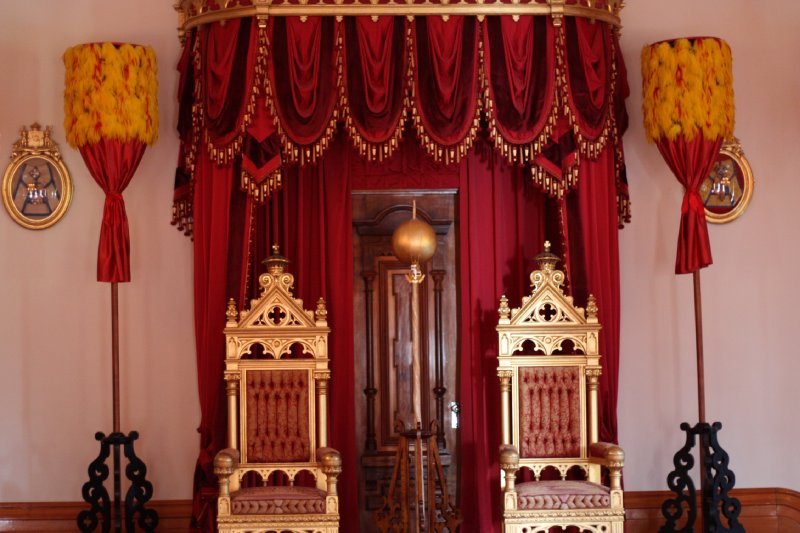 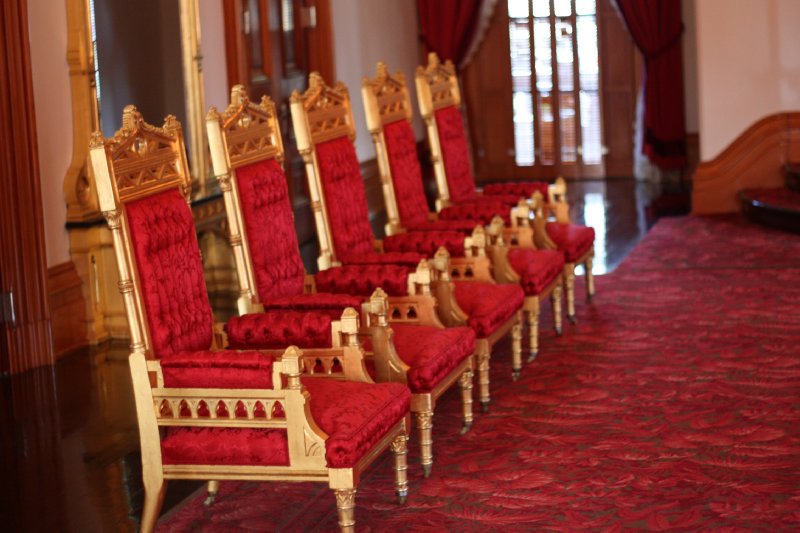 This is (obviously) the Dining Room 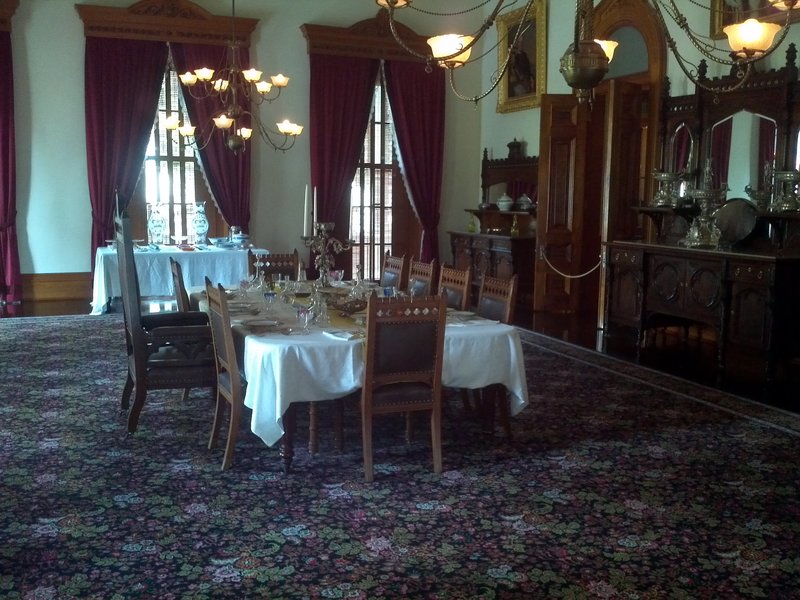 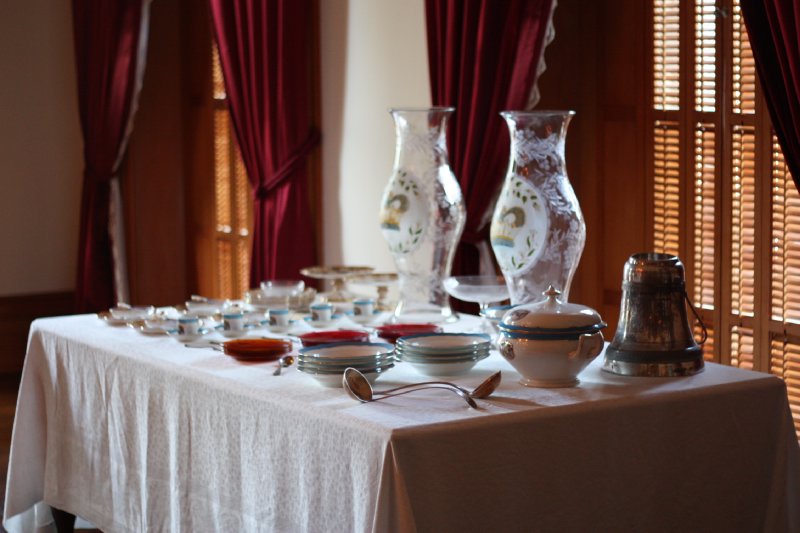 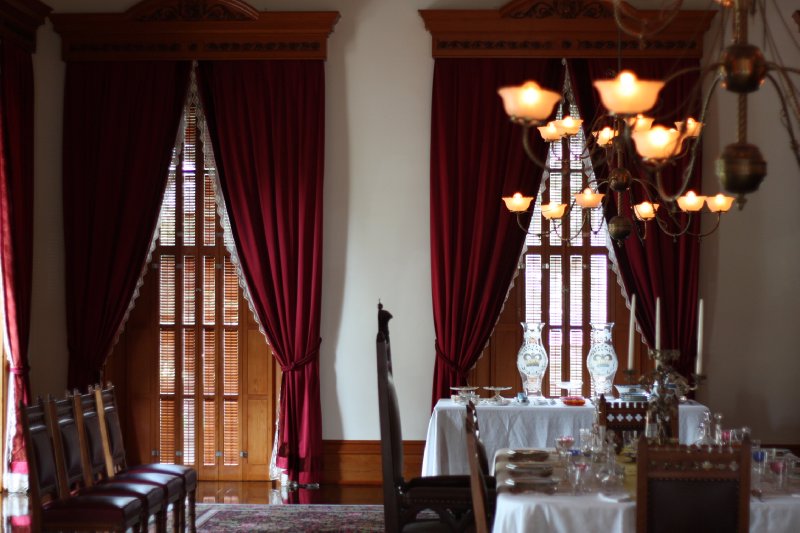 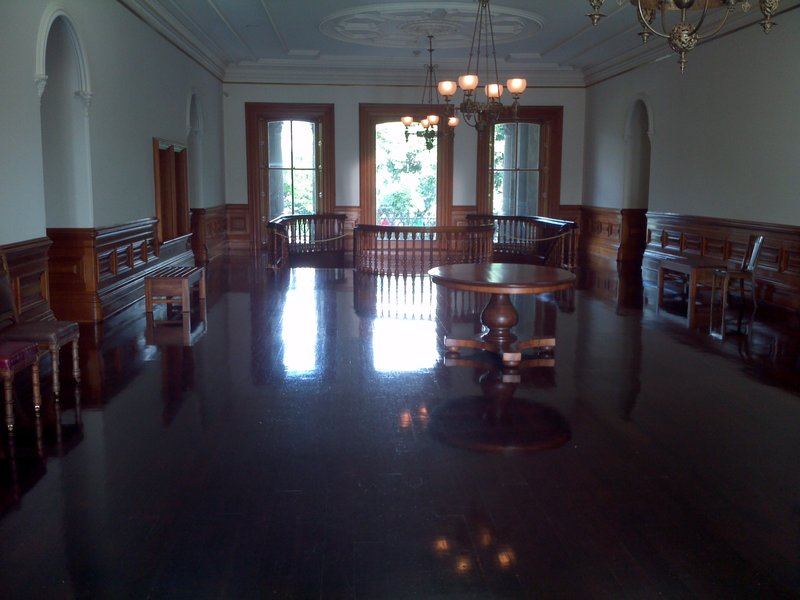 In its present state, the library doesn't look like much, but the King read widely: his books have been disposed of and no replacements have been put back 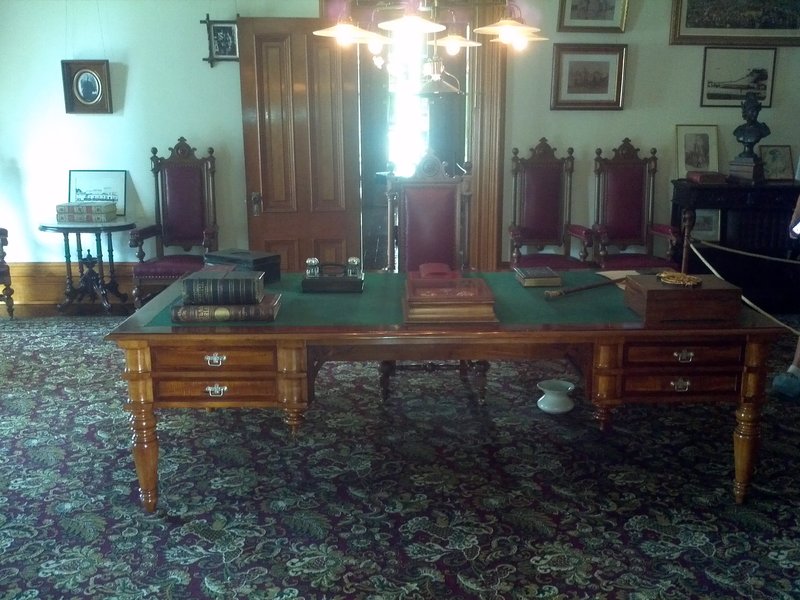 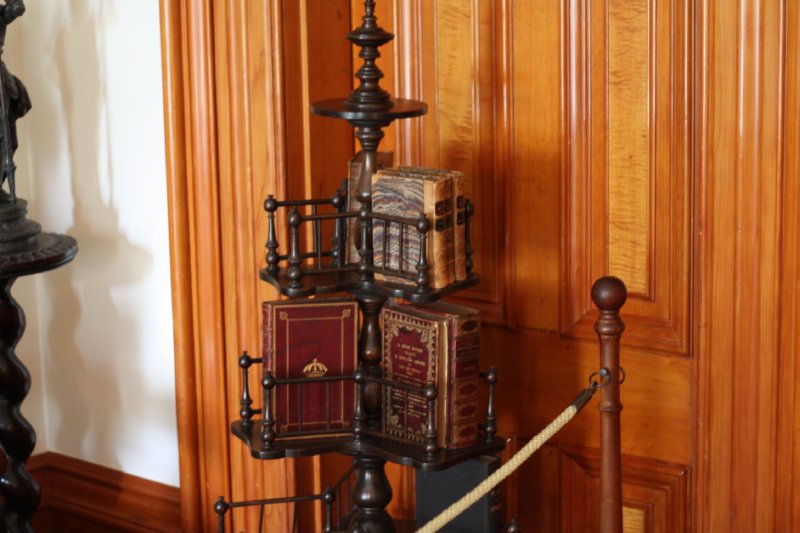 This is called the Blue Room, used as a sort of public meeting space, less formal than the throne room 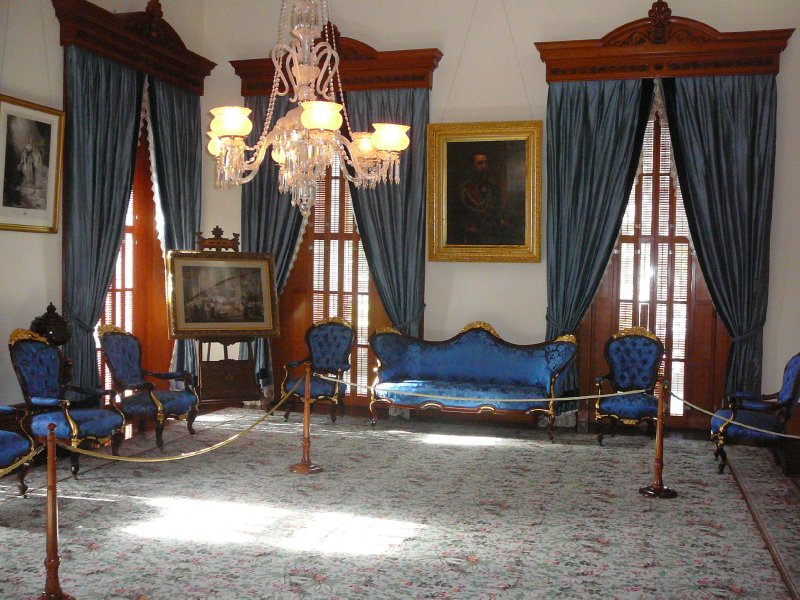 Most of the bedrooms were largely empty - despite all the decades of detective work to recover stuff, they have still not found the King's bed! After the monarchy was overthrown, a couple of years later there was an unsuccessful attempt at revolution to reinstate the Queen: she was tried and sentenced to hard labour, but that was commuted to home detention. While locked in the upstairs front bedroom, she made a quilt which is now on display 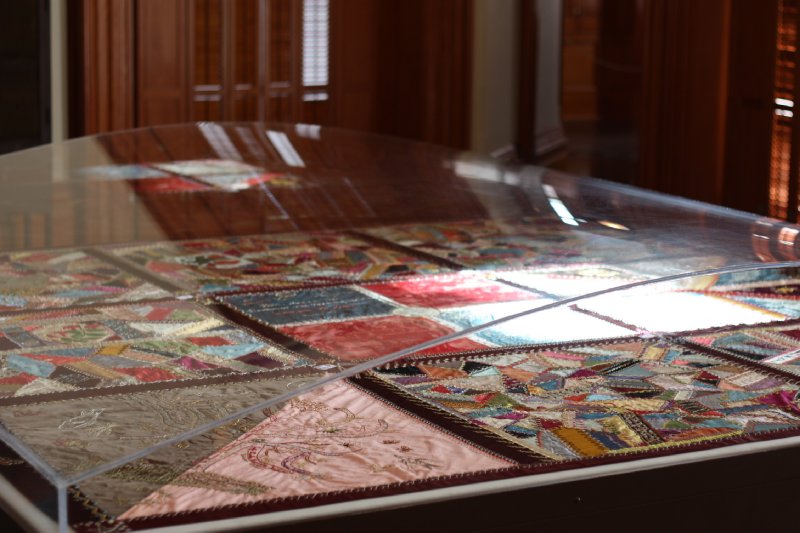 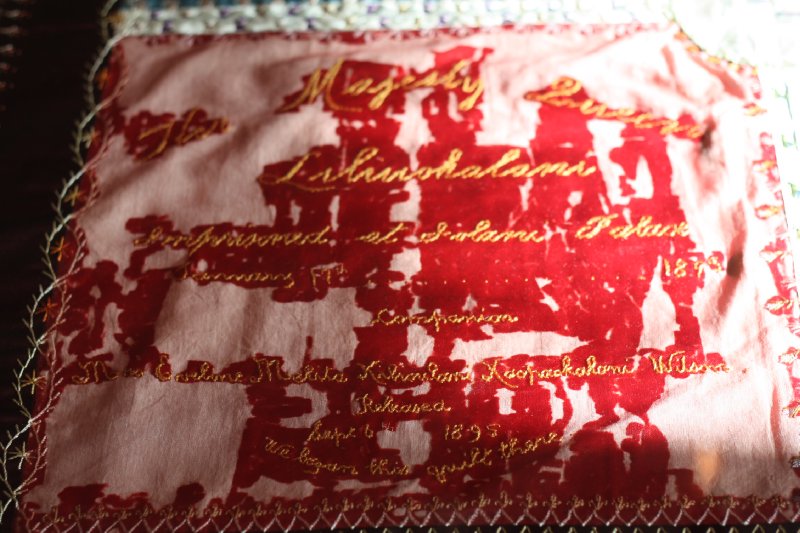 For those who don't know, the result of the overthrow was that the American's appointed a governor and Hawai'i eventually became a State in 1959. President Clinton formally apologised, saying that these activities were not lawful.

On the way back, I came across this rather jocular version of Santa 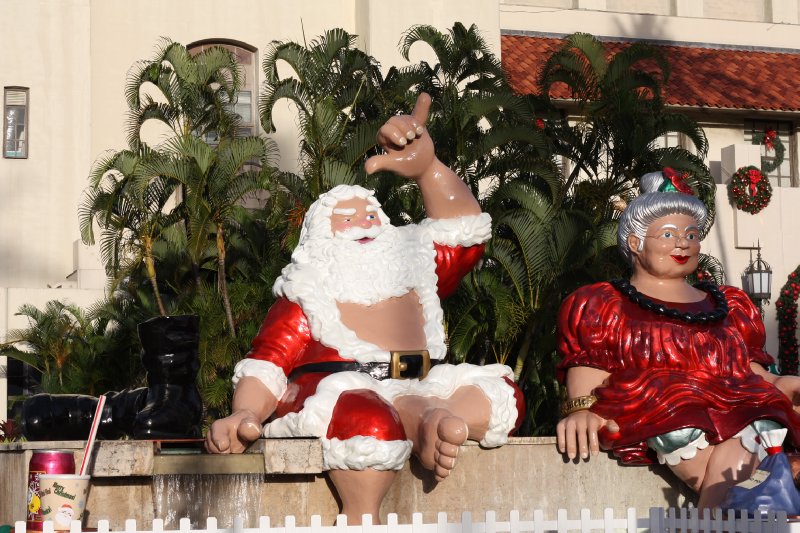 Curious, I went inside and found the entire space given over to Christmas decorations 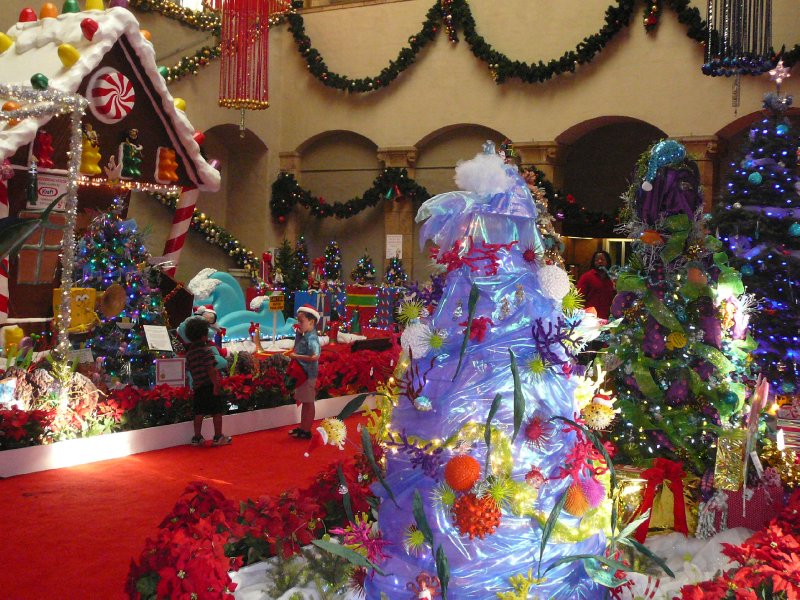 This is Honolulu Hale - essentially City Hall, the centre of Municipal government, where people come to pay their rates, register to vote or see the Mayor: I couldn't imagine any townhall back home being so decorated.

My final visit was to a palace of quite a different sort: Walmart. I don't think I like it very much - I found the experience completely overwhelming and am pretty sure that if I came in for something specific, I'd not be very successful as I'd either get lost or, more likely, forget what I was looking for. It was interesting to come in to just wander around, although I did find that there was almost always someone about to run me down or in my way. 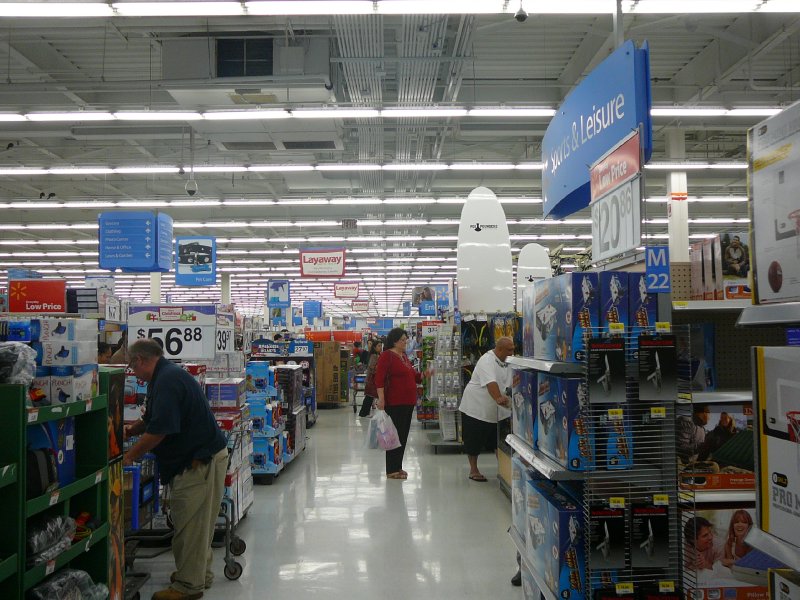 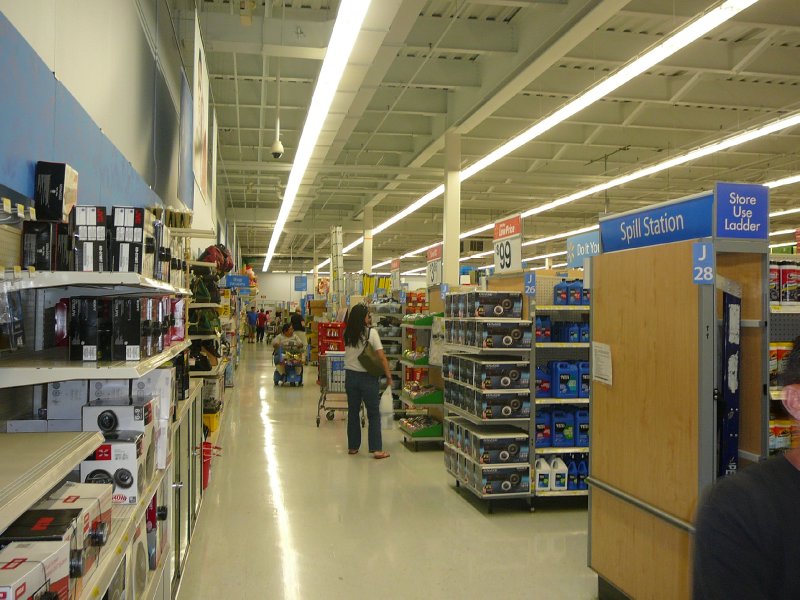