I saw a lot while I was in San Diego, so there are going to be a lot of photos but not a whole lot of story going on. I was there six nights, five in the HI Hostel right in the middle of the Gaslamp and then my final night in 500 W, the former YMCA, purely because it was close to the train station. The former was a warm and friendly experience, the latter was not. My first morning, despite the time difference and the noise going on until 2 a.m. I was up and about by 7:30 and on a bus out to Coronado Island (I'm not convinced it is an island - sure, we got there by going over a vast bridge, but I caught another bus which took me off the bottom without crossing any water).

This is a posh place, with the famous Hotel del Coronado a key feature. 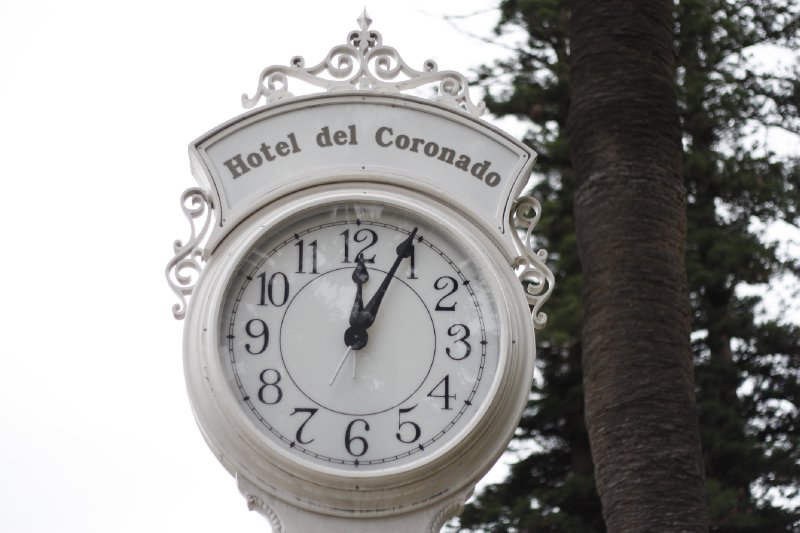 It is a $400 a night joint, attracting the sort of crowd who would try to have a shiny Landrover 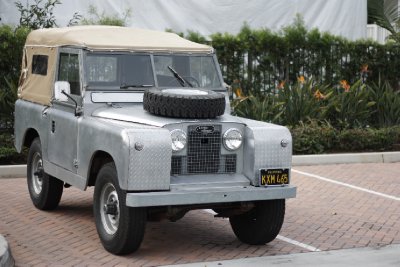 a key feature. After a quick breakfast, it was time to meet Chris 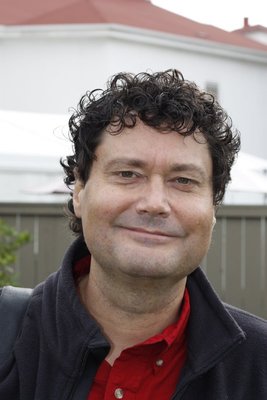 - a fellow running a photography course I had booked through one of those discount voucher places: money well spent, as I learnt so much about the various buttons on my camera and a few tips on shooting as well.

He was a bit more pre-occupied with taking pictures of plants than I was: I did take lots but junked most, there were only a couple I quite liked: 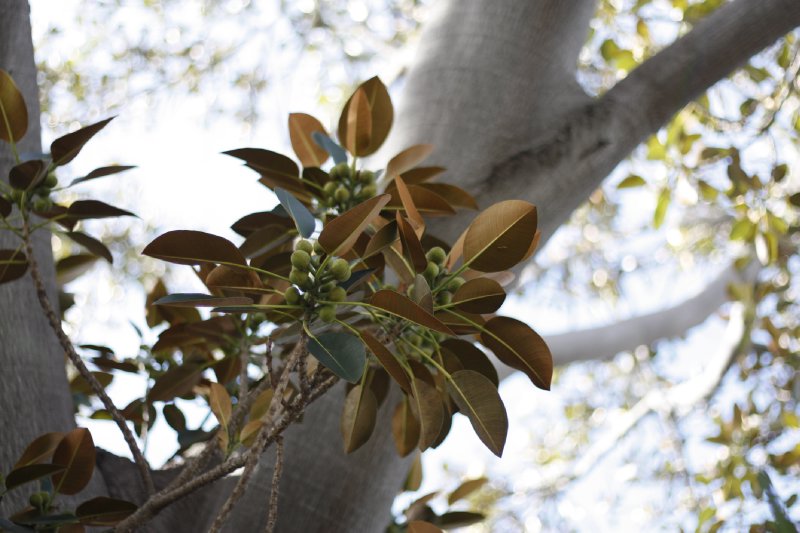 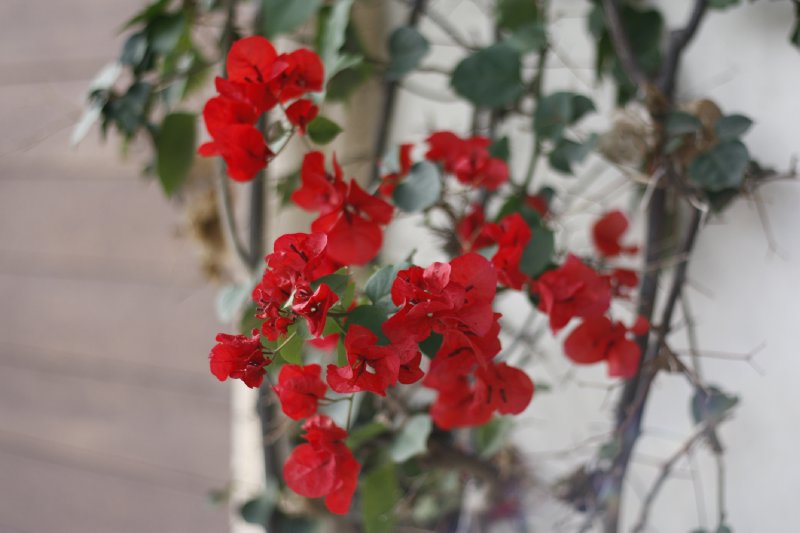 The main focus of the course was the hotel itself: it is a bit of a rambling pile of a place, built in a hell of a hurry and thus not very well planned or consistent in its look 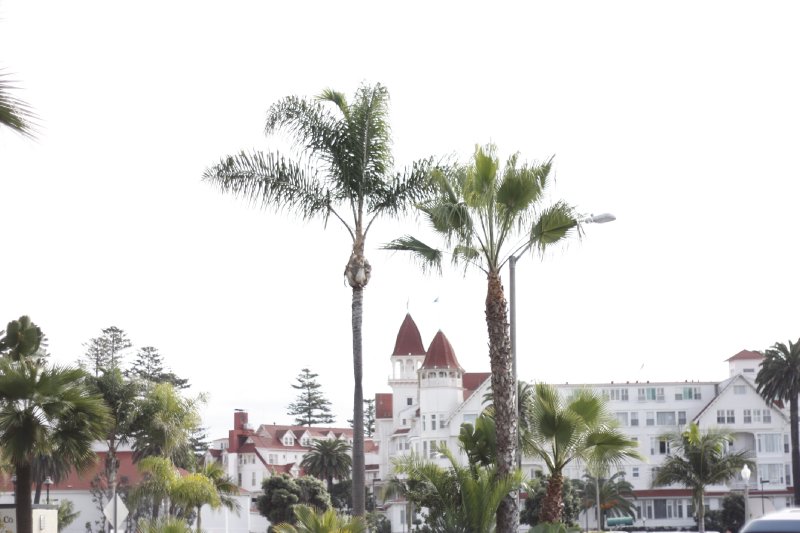 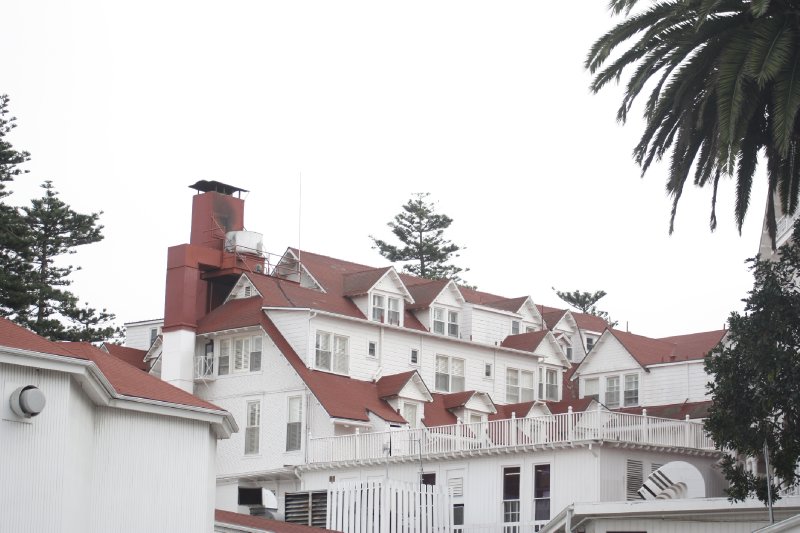 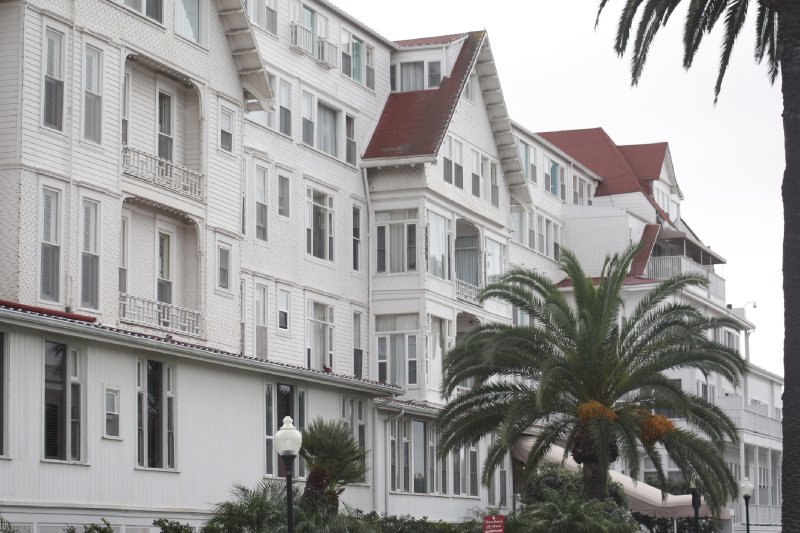 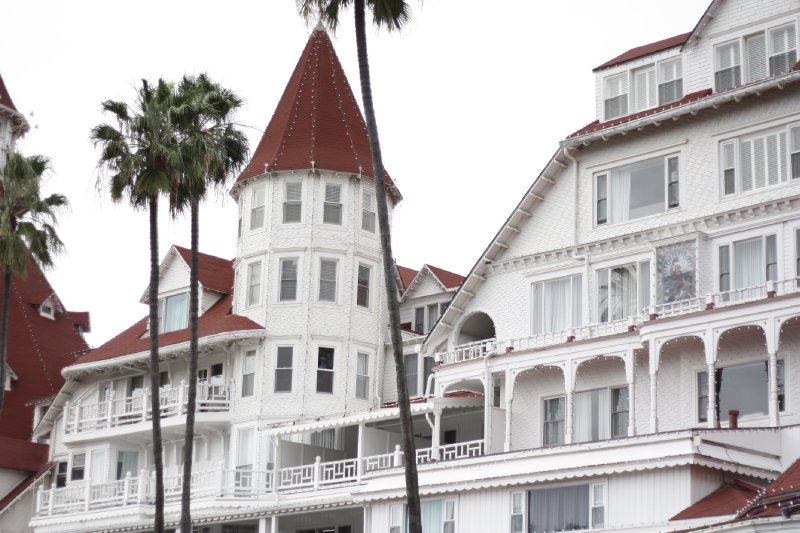 We had a go at portrait photos of the other members of the group, but curiously enough it was Maddy who was "volunteered" to be our model, I don't know why 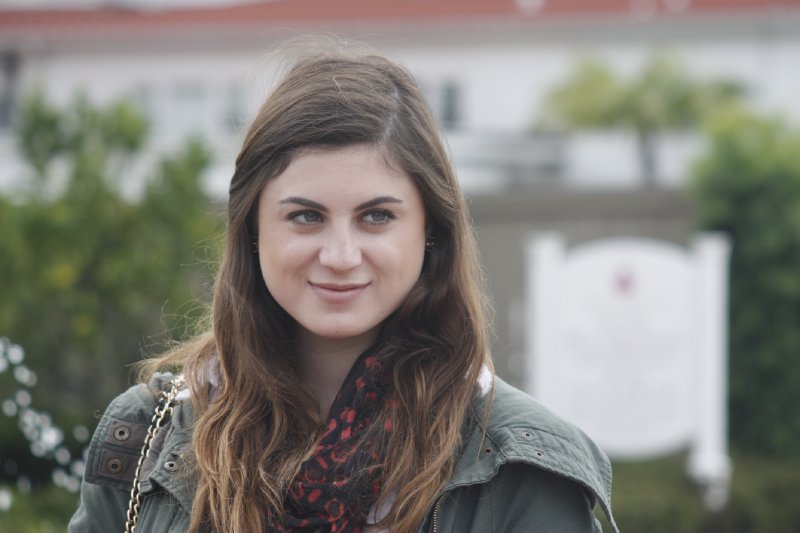 I was playing around a bit: she's a bit outshone by the fountain in this one 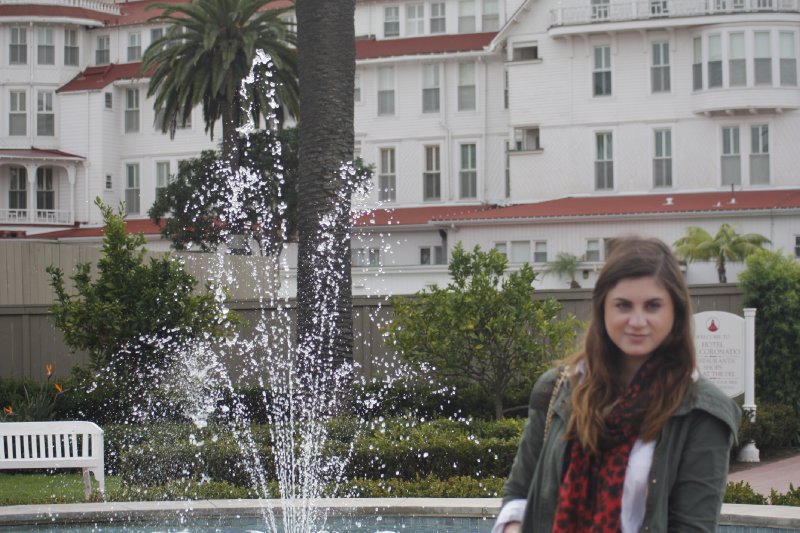 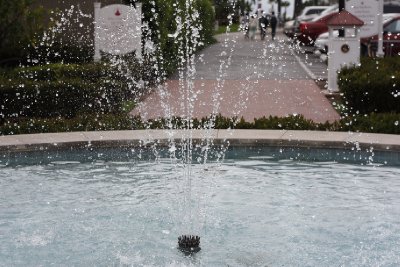 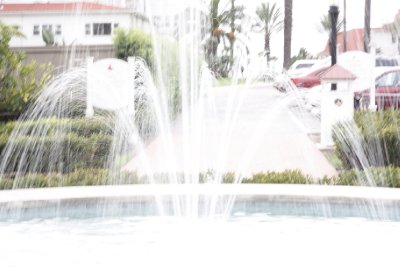 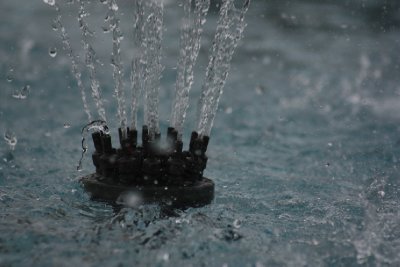 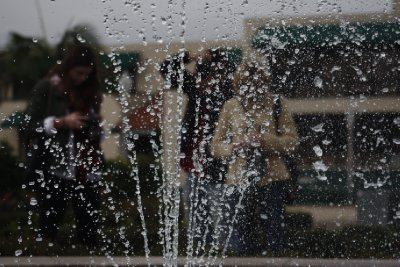 Along the way, we met this colourful fellow, who was willing to be shot 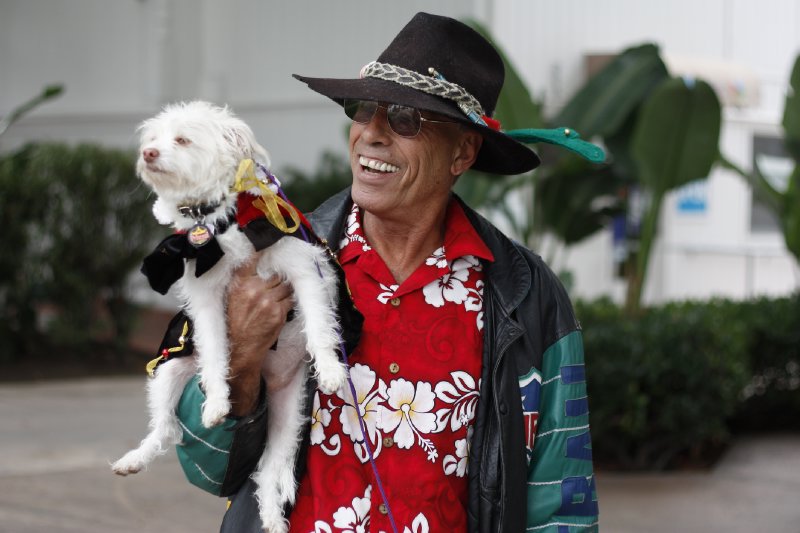 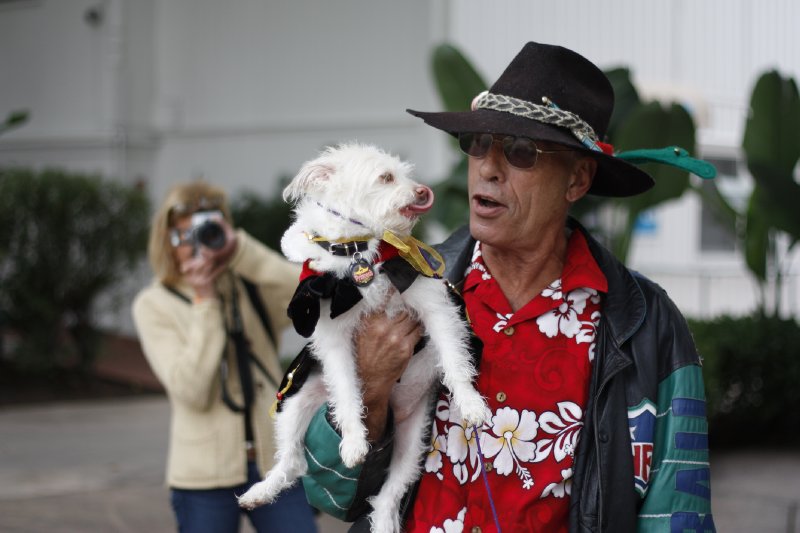 Out the back (really the sea frontage, but there's no road access so it seems like the back) 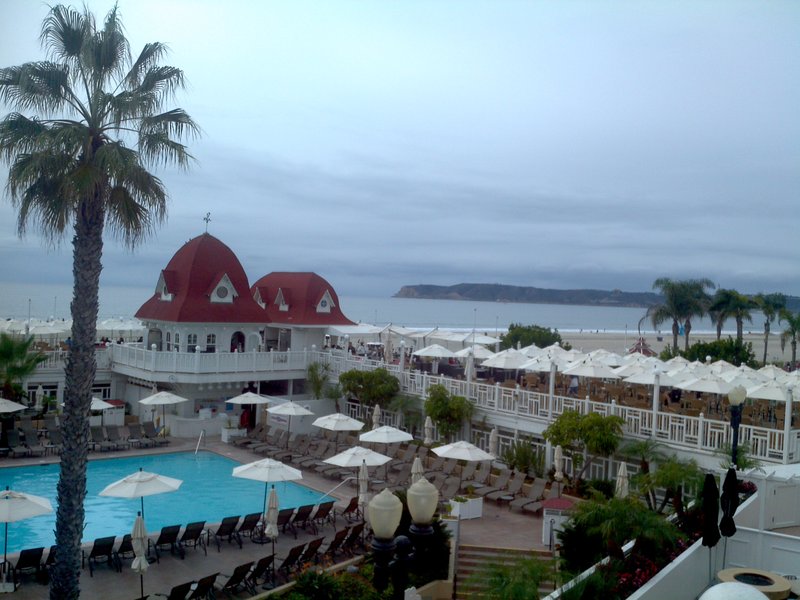 there was ice-skating. We were challenged to take an action shot - I had a few failures, but got this fellow 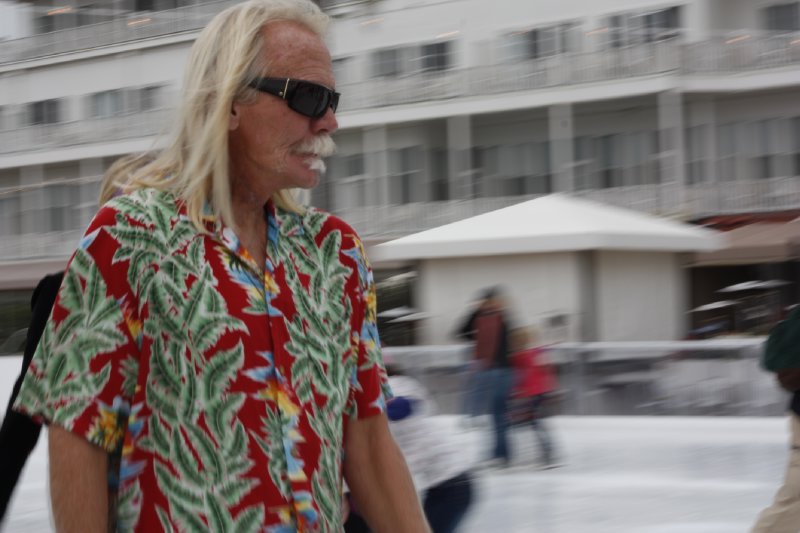 We did get to go inside the hotel, but I didn't get any photos I am particularly proud of. All in all, it was a great way to spend a Sunday morning and meet some locals. After we split up, I had a good look up and down the main street of Coronado - the only place that really caught my eye was Clayton's Coffee Shop, although it turned out to be more diner than coffee shop (at least as I understand the term), so I signed on for pancakes instead of cappucino. 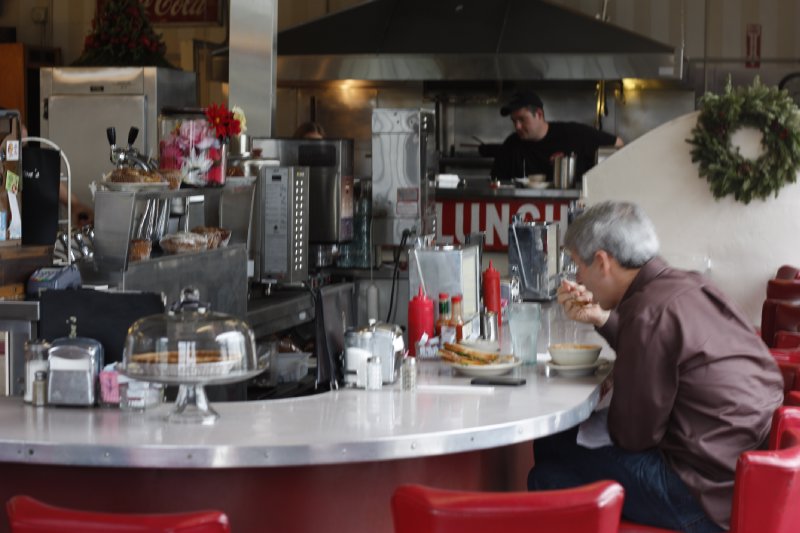 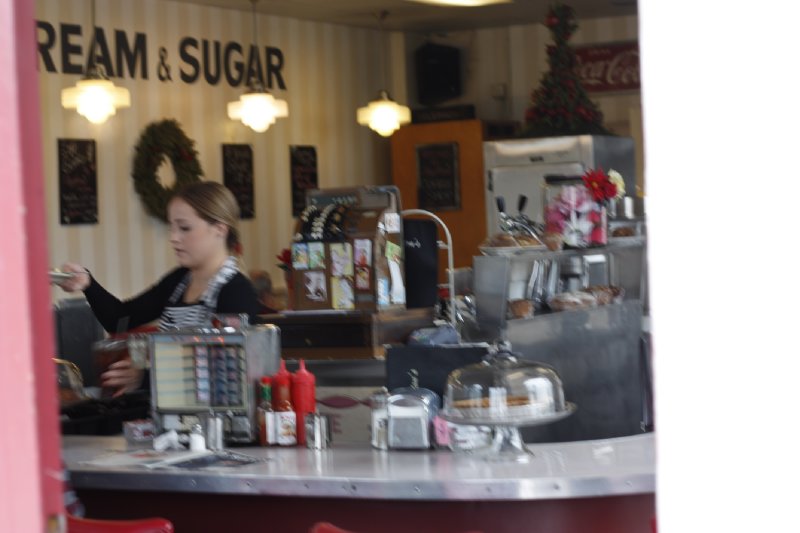 I thought it would be interesing to go to what I believed to be a suburb of San Diego but which was actually more of a re-enactment of the original site of San Diego: Old Town. This is where San Diego started but there was a big bust up at some point, and the powers that be decided it should be a few miles south. So the original buildings have either been preserved or reconstructed 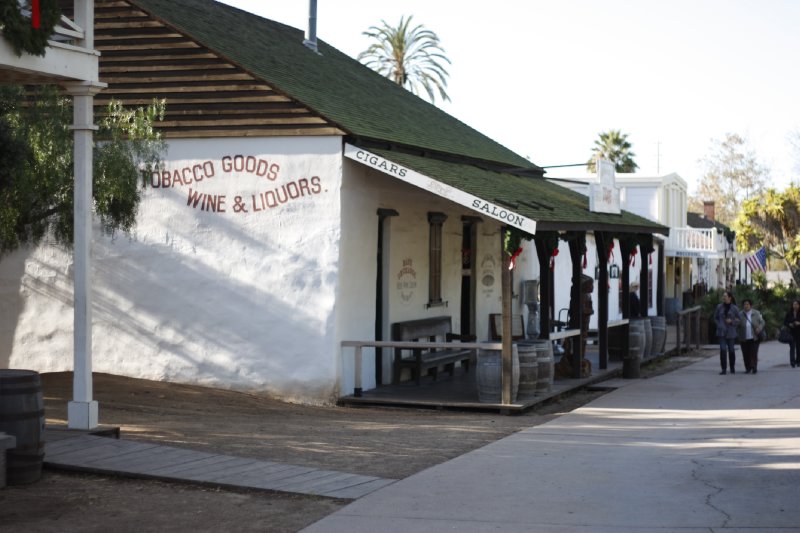 The original homestead is still there 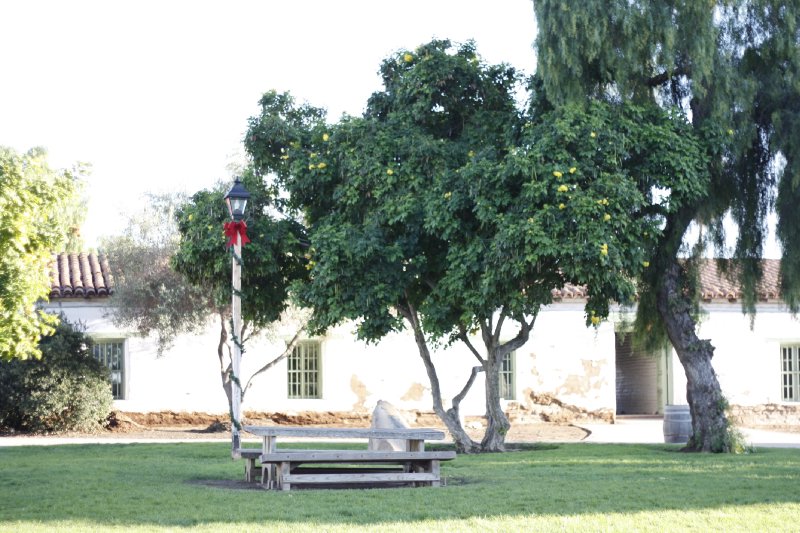 I was surprised at how many bedrooms this place had - I suppose there would have been a big family of multiple generations and perhaps others to house, given that the family who lived here were the leading family in the area. The house was framed around a garden and had internal verandahs, quite nice really 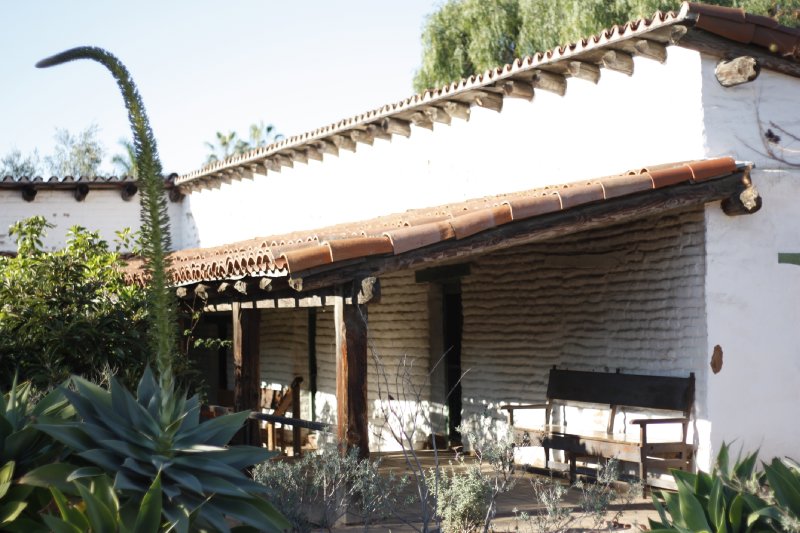 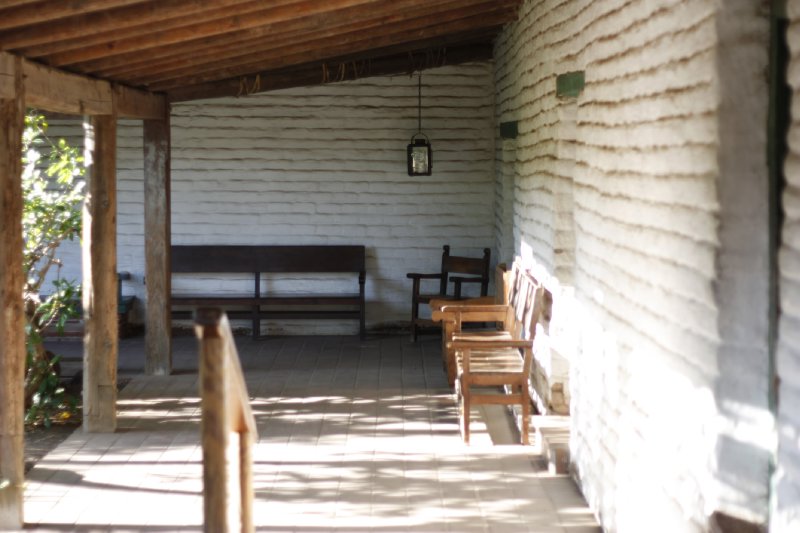 I had a good walk around: the town was maybe two or three short blocks long, it was hard to tell where reconstruction ended and a new pastiche of the original took over (there were lots of bars and the like in modern buildings done old style). I particularly liked the general store, where everything was laid out on neat wooden shelves 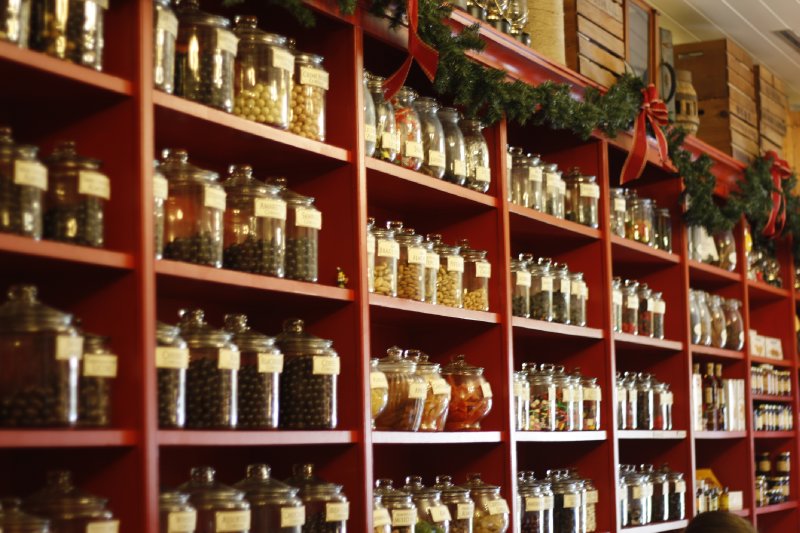 although I was a bit confused by the ginger beer they sold me: it was "botanically brewed" and from the UK 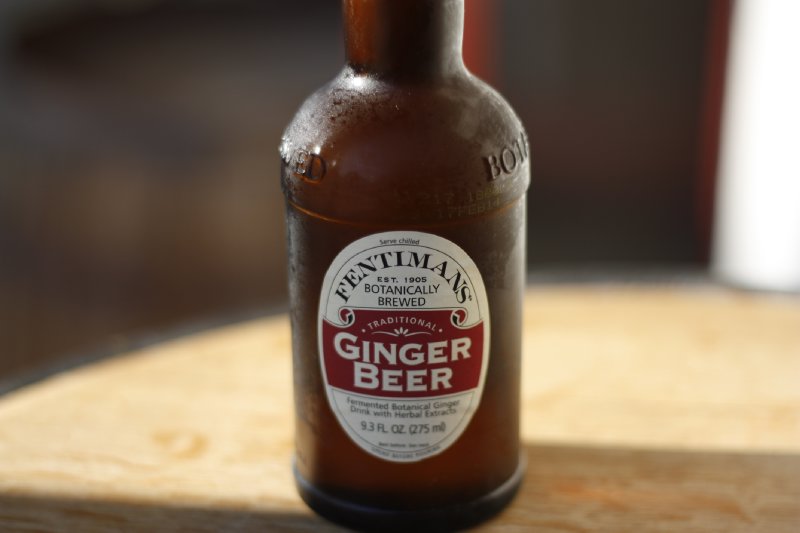 Looking at the Fentiman's website, I think that all it means is they use real products i.e. ginger to make the brew. It certainly had a nice hot gingery spice to it, not like the oversweet Schweppes I have taken to drinking. Something in another shop also confused me, for a different reason 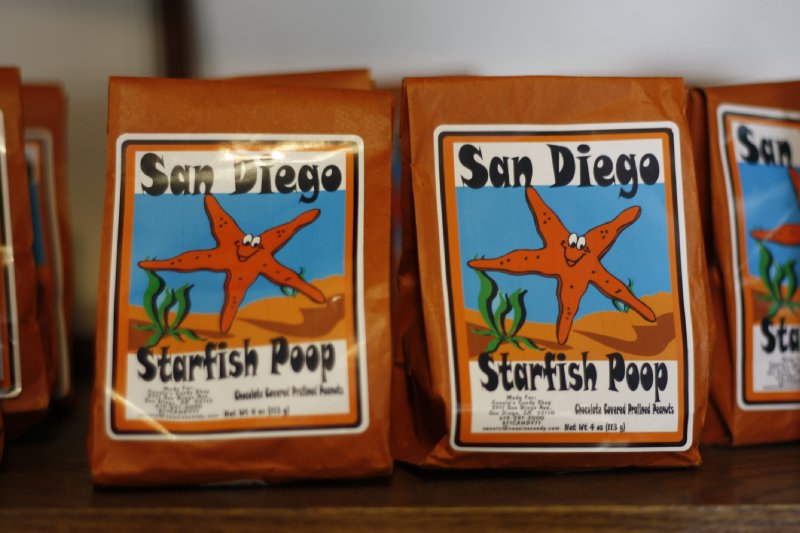 One story seemed like it had come straight out of the book I am reading: Mark Twain's The Gilded Age. The good people of San Diego needed a prison, so they called for tenders. A builder submitted a tender for $3000. The Sheriff (and son of Town Council President) bid $5,000 and was given the tender. He built a nice cobblestone building, using mortar to hold the cobblestones together, as you do. Only he forgot the cement: apparently when they actually locked any prisoners up, they'd give the key to the prisoner in order to preserve the structure of the building (in case the prisoner was minded to escape). One famous prisoner (actually the first) was a fellow called Roy Bean, who was brother of the Mayor and who went on to be a Judge (after escaping from the jail by burrowing out using a knife concealed in some food he was given. His Wikipedia page makes him sound like a real character, a man very much like those who populate Twain's novel.

In the evening, I took a bus a way out along University Avenue (I thought there would be good cafes around the Uni, but did not know that University Avenue goes to a projected University that was never built) and had what google reveals to be a 9 mile (!!) walk back. It was an interesting walk - a few posh areas, but mainly lots of "plazas", liquor stores, fast food places and small businesses doing things like taxes, tattoos, pet-minding, pawns and small loans, car repairs and supplying all sorts of adult services. I never did get dinner: instead I grazed on buffalo wings, donuts and coffee (I found at least three good looking coffee shops on my walk). I picked the Claire de Lune on the very scientific basis of it being the first I saw.