On the Road: San Diego to Palm Springs

I mentioned that I changed hostels for my last night, to the former YMCA. It had a much nicer lobby than where I had been, but that's about all that was good about the place. It is a big place but seemed sparsely populated and lacking sociability. The guy in the bunk below me had a leg in a cast and was sleeping with it extended into the room: maybe it was that or sleeping in what seemed to be a narrow bunk made me fear I would fall out, so my sleep was disturbed and I was up of my own accord and in the train station by 7:30. Confusingly the station is called Santa Fe, reflecting its origins in the Atchison, Topeka and Santa Fe Railway system. Like much of Balboa Park, it was built for the California-Panama Exposition in grand style. 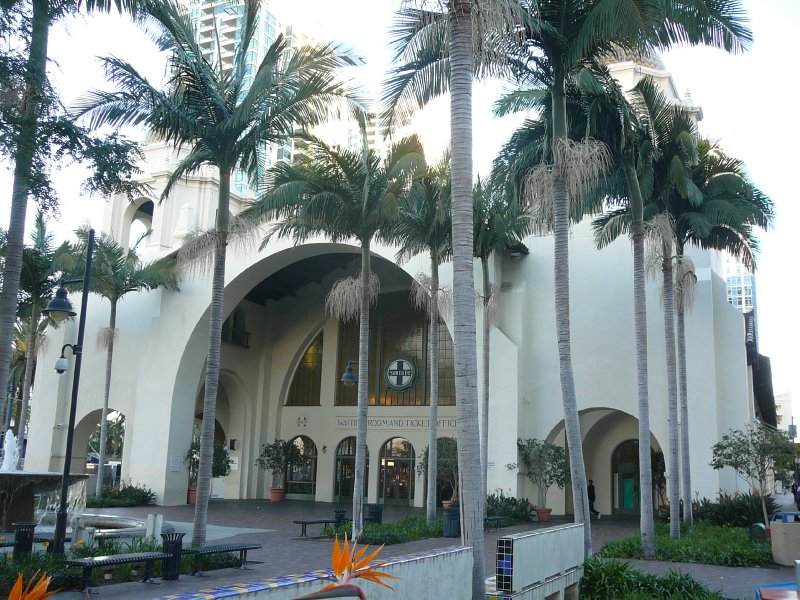 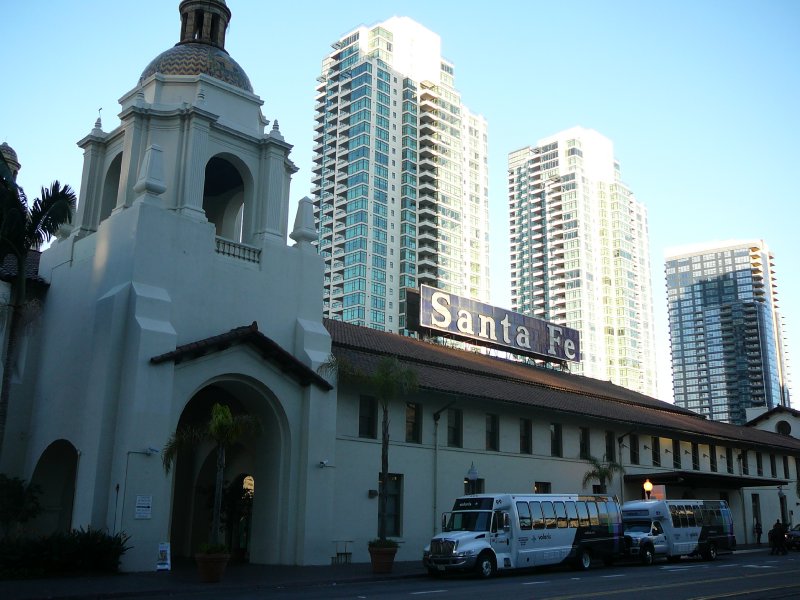 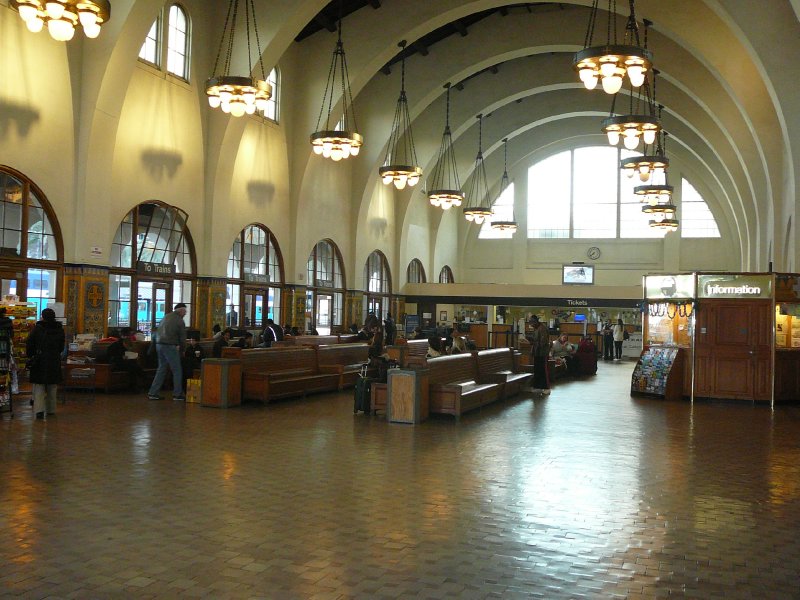 The trip up to Union Station in Los Angeles was very relaxing - the train was far from full and it was quite scenic until about Anaheim. I had two quite different groups sitting within earshot who were noting various points of interest. The young professionals could point out the biggest Mercedes dealership in the nation, while the dad of the two young boys could identify the function of various buildings. I was surprised out how close the tracks ran to the Pacific, almost right on the beach at times. 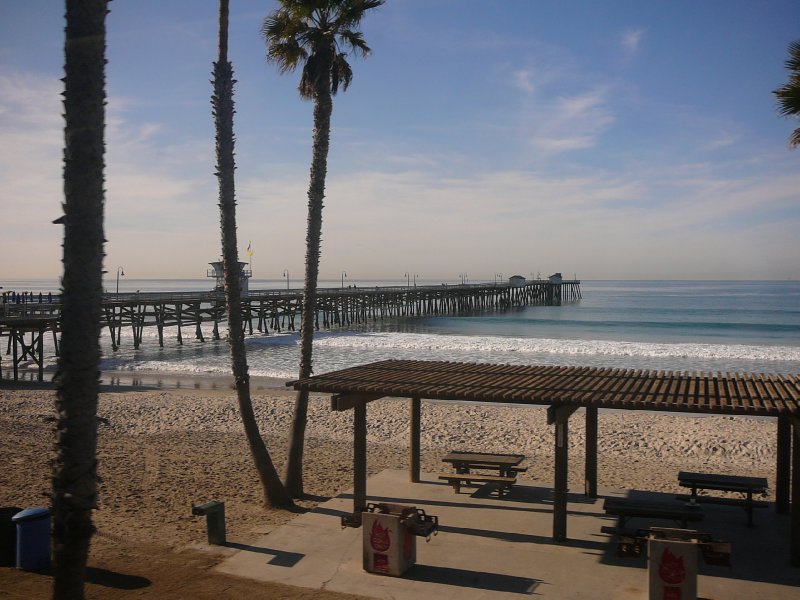 After Anaheim, we were really in LA, but a grotty part - light industrial and transport. I didn't hang round the station, but was lucky enough to be on a 704 bus out to West Hollywood almost immediately - it went out Sunset and Santa Monica Boulevards, which featured plenty of signs indicating this was part of historic Route 66 - still traces of old LA, such as a couple of old burger places and motels (Paradise and Olive - their reviews suggest they have become somewhat seedy - one visitor was sure she was going to be raped then murdered).

Getting the car was a simple process and I was unleashed on Interstate 10. What a nightmare! Even though there are six lanes each way, traffic in all would come to a halt at every significant on ramp. Then there would be some major division, so if I wasn't in the right lane I'd find myself back in San Diego or on my way to Seattle. I took a break and made the mistake of going into Walmart to stock up on supplies: more bedlam there. Plus it was so enormous, I became completely befuddled. I was amused by the complete lack of knowledge of the fellow running the liquor counter: the kids in front of me were buying Black Label - there were dozens of bottles and he still had no clue as to what they were after.

As a result it was well after dark before I got to my destination, Indian Wells Resort Hotel. It sounds flasher than it was - a fairly unremarkable hotel, although it was nice to have a spacious room. I chose it because it was owned by Lucille Ball and Desi Arnold and because it was offering a cheap deal. Travelling off season has its benefits. I did expect Lucille to feature more strongly: there were a few photos but more prominence was given to Frank Sinatra. There was even a Frank wannabe performing: I just found him annoying. Every time I heard him, he was doing the hard sell on his CD's and then playing the CD rather than actually singing. Funnily enough, as the night wore on his CD's became cheaper.

Indian Wells is a very posh place, mainly golf clubs, country clubs and high end steakhouses, so getting dinner was a problem. I ended up going to the next town over and finding an Applebee's for steak. It's a chain, but pretty amiable and the steak was good and they made quite a nice mojita.

I spent the morning at the Living Desert, a combination zoo which had lots of desert dwelling animals, a few themed gardens to replicate different deserts 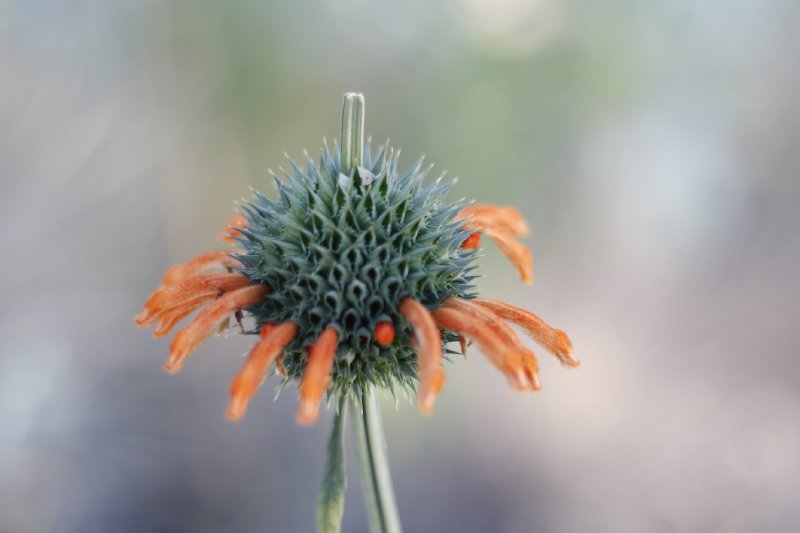 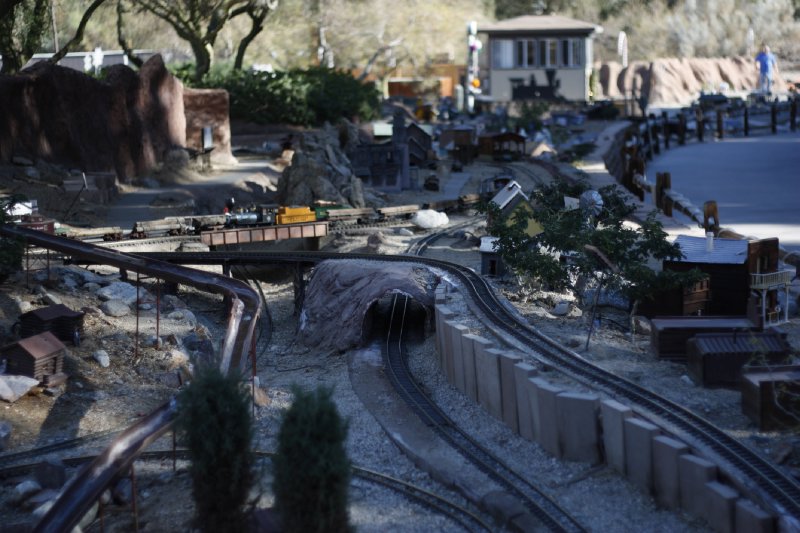 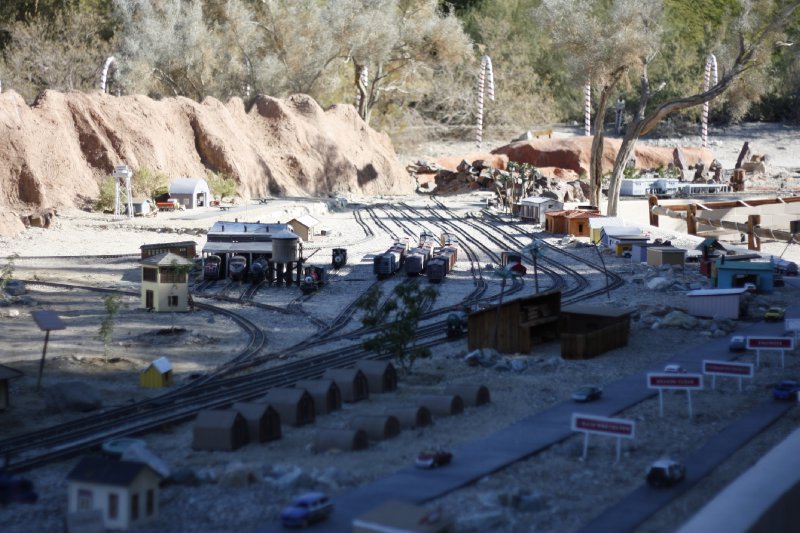 It was OK, I was there for a couple of hours and have some more animal pictures to prove it. I saw lots of different sorts of cactus but they didn't do much for me. There was a hell of a lot of snakes simply sleeping, like this fellow 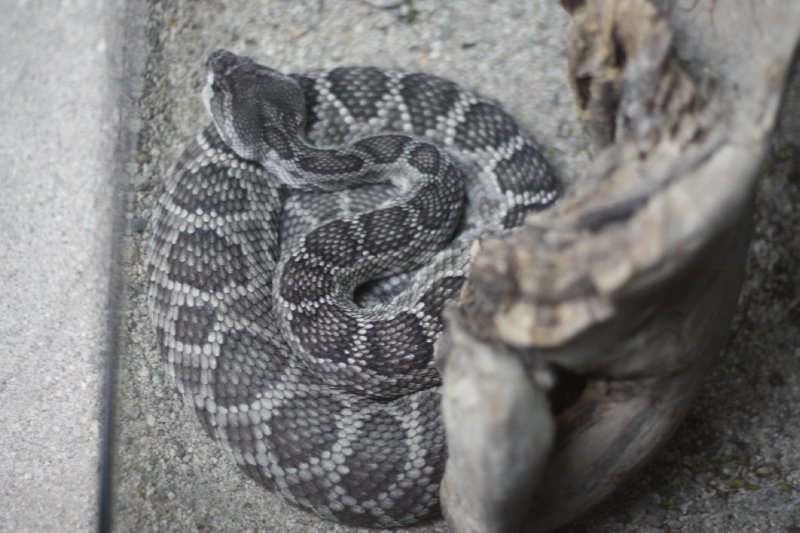 but I was amused by this one: I don't know how long it had been in this particular enclosure, but it still hadn't got into the snakebrain that he was just looking at a reflection, not another snake 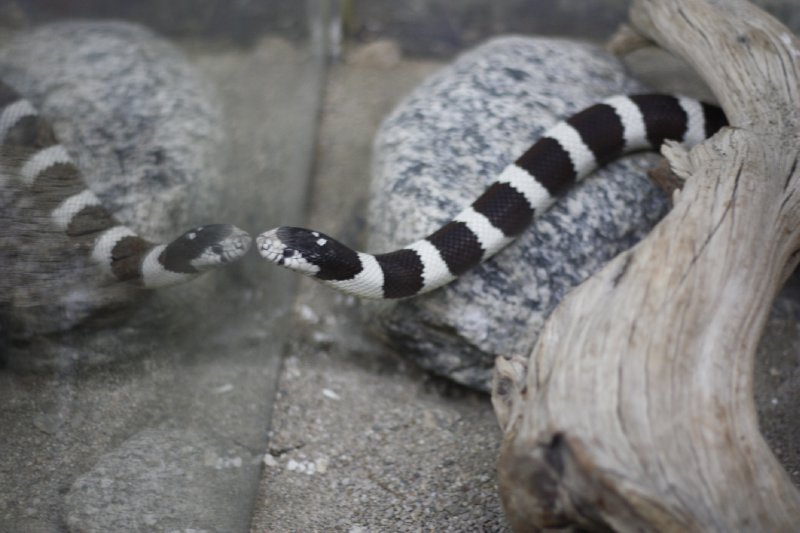 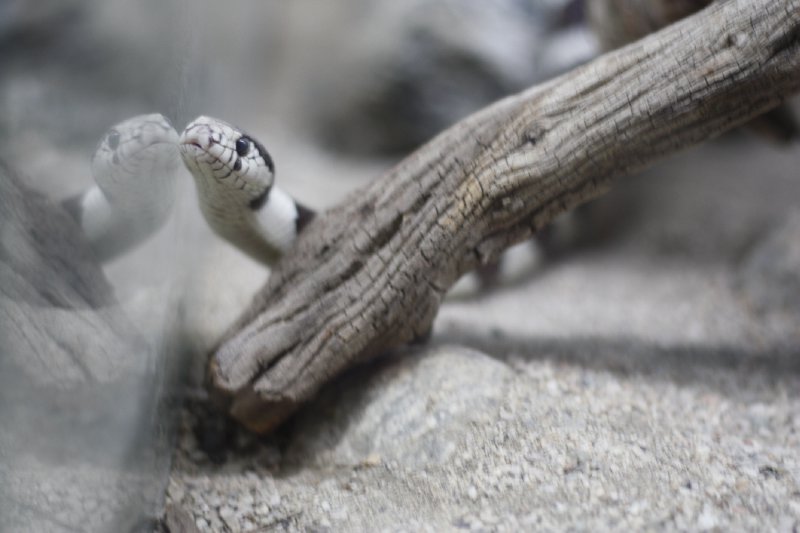 There were various members of the cat family 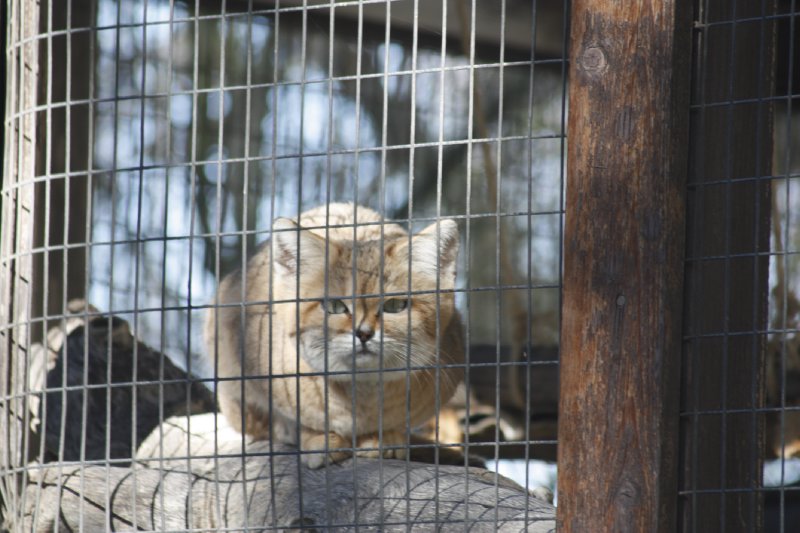 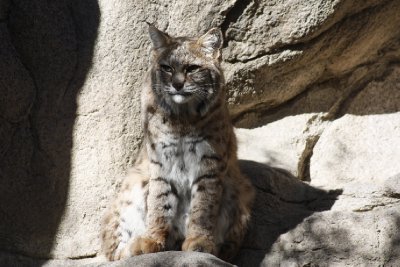 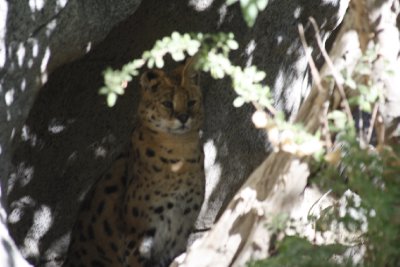 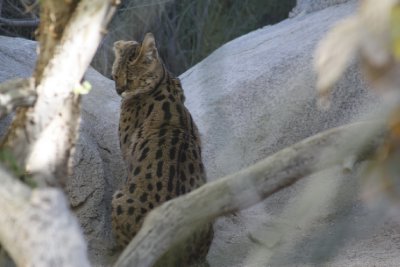 This fellow looks like a pig but is completely unrelated, he's a Chacoan Peccary, thought to be extinct but found in the 1970's in Paraguay 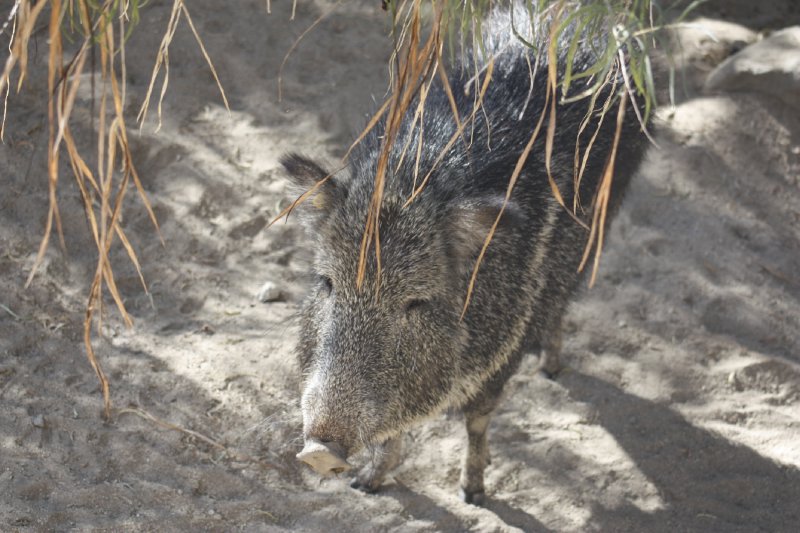 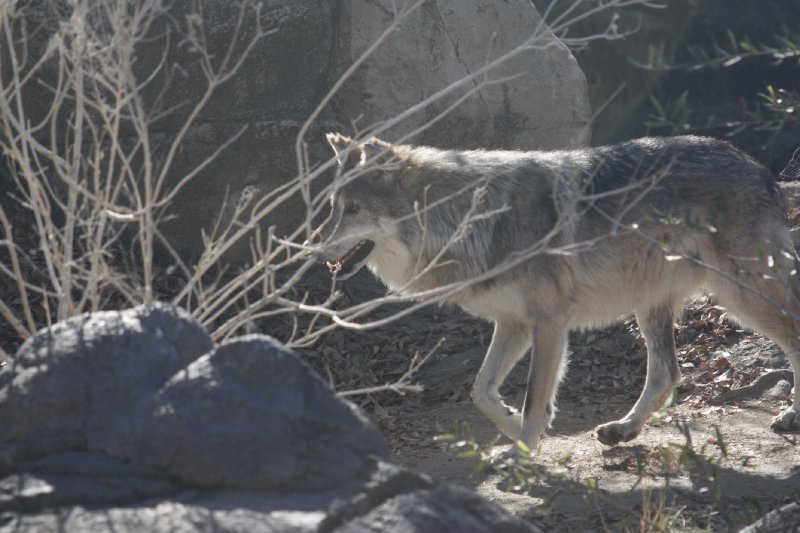 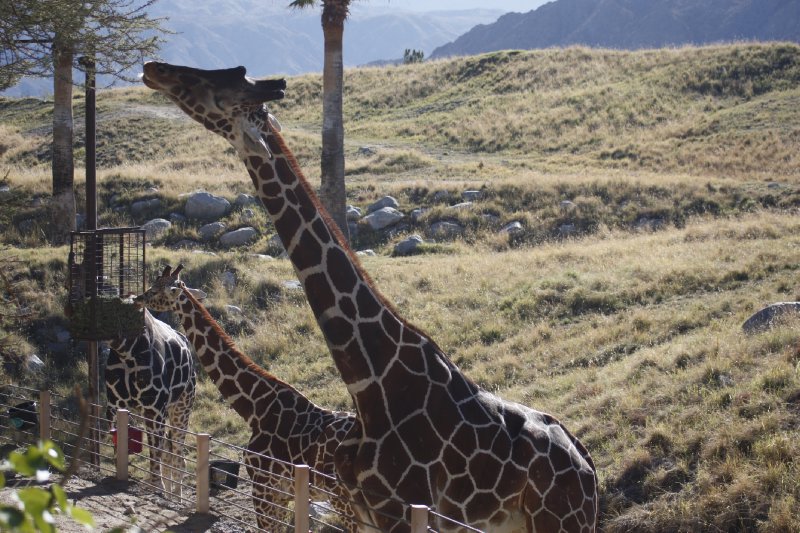 I spent an unsurprisingly large amount of the afternoon at a Staples store, carefully checking out all the stationery and emerging with just a few items. There was a geek family making a few purchases: for each, they had a family conference over the various attributes and merits of a few competing items. I'm convinced they took half an hour to buy a pen!

Now that I have a car, even though it is a puny Nissan Versa, apparently the cheapest car for sale in America, 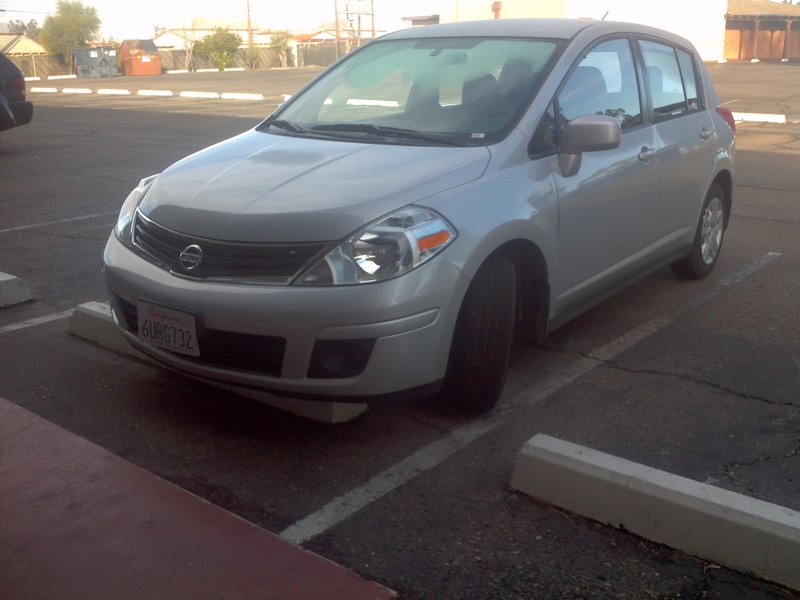 it has widened up my accommodation options as I can drive around until I see something suitable. I had been turning over various ways to make my nights as cheap as possible - you can hire an entire U-Haul van for $19.95 a night and if I was to park it outside the U-Haul depot, it shouldn't run up too many costs. Bag in the back: sweet. Then there are the various self storage units: they must be cheap for a night and I could take their description very literally. But I'm finding cheap motels plentiful and good value: this is the Knights Inn in Palm Springs, which had very friendly folk running it but pretty much all the places I'm staying look something like it. 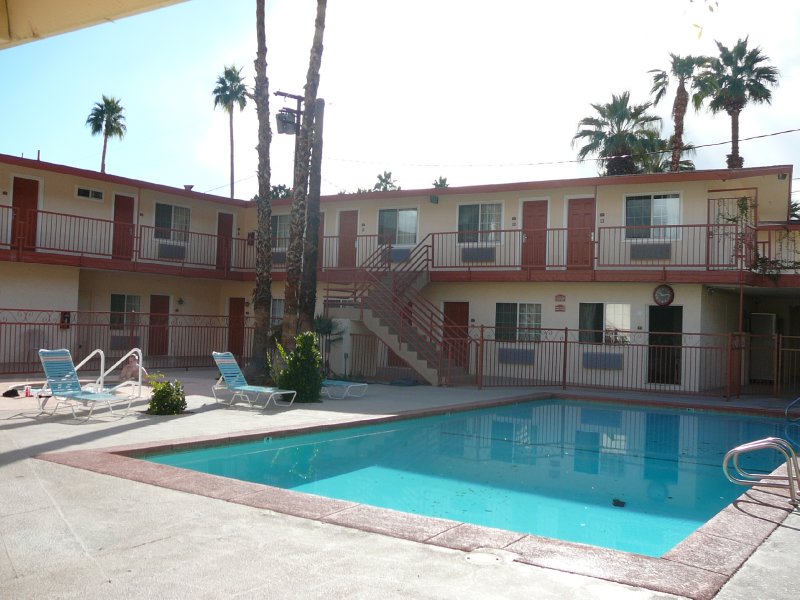 Posted by NZBarry 23:45 Archived in USA