Driving into San Antonio in the early evening just as dark was falling, I was struck by the narrowness of the streets and the apparent elegance of the tall buildings which hedged them in (not so great in the daytime, unfortunately). 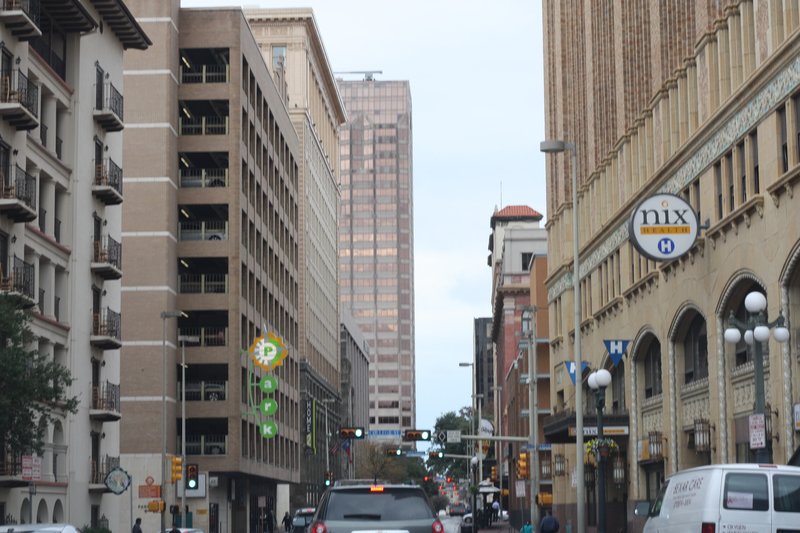 Of course, in San Antonio what you see is not what you get as there is a whole underground world going on: a river runs through the city beneath the level of the street. It has been channelled, paths built and many bars, restaurants and shops are on this riverside walk. Once I had found somewhere to stay, it was very pleasant wandering this path although I have to say that all of the bars and restaurants, although they ostensibly had different styles, featured food which was very similar - steaks, burgers, sandwiches and the occasional Mexican treat. Maybe it was because I wasn't feeling 100% but none of it appealed: I ended up driving around until I found an old-skool cafe called Lulu's (famous for being on a TV programme called Man v Food) and tried my luck with fried catfish.

For the first time on the trip, I was confronted with heavy rain the next day which kind of suited me: being at the halfway point, I felt like resting up so, apart from dashing out to a coffee place I'd read about that didn't actually sell coffee but gave me a huge pot of watery tea instead and a mighty fine piece of raspberry and white chocolate cake, I didn't leave my motel. The rain did clear up the next morning so I was finally able to get out for some photos. In the daylight, the riverwalk didn't look quite as interesting and the bars etc were all deserted. 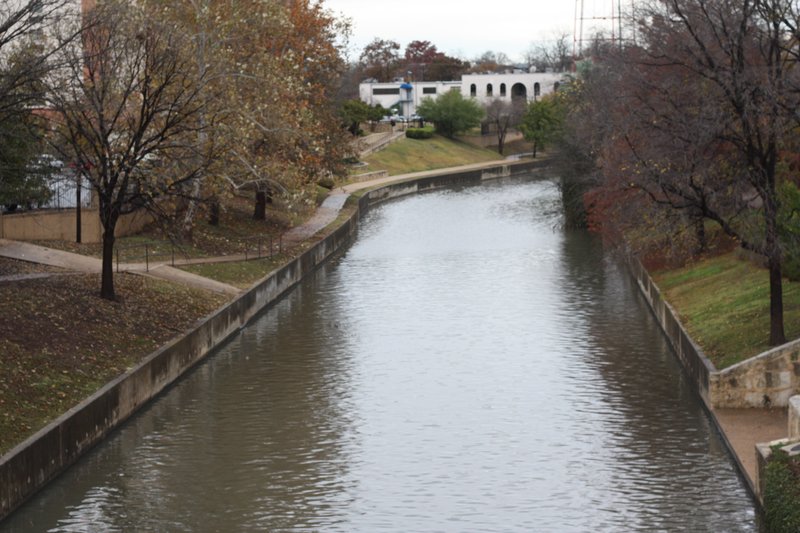 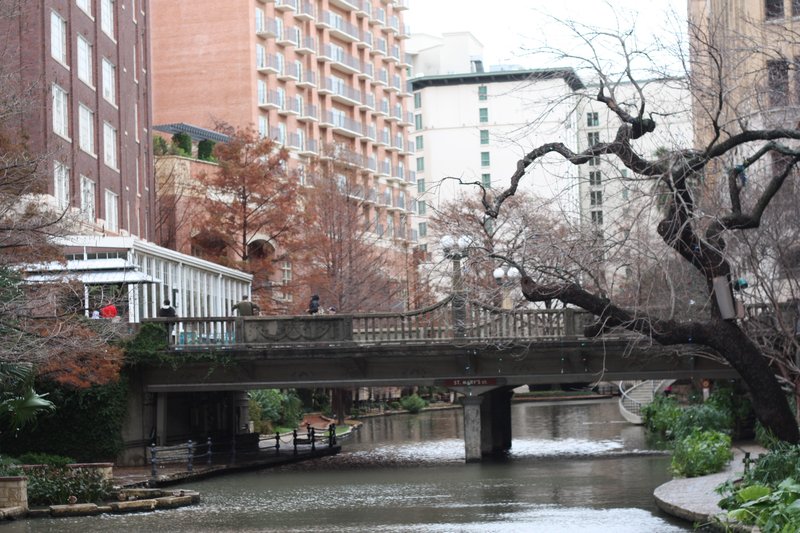 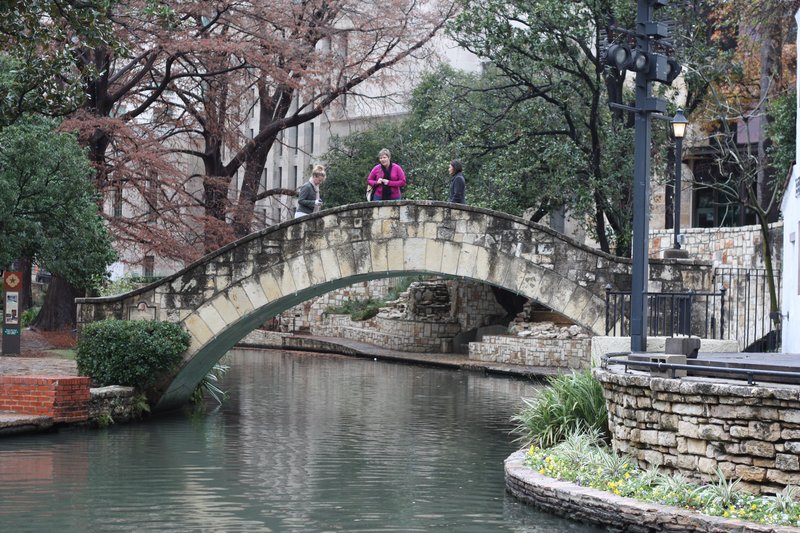 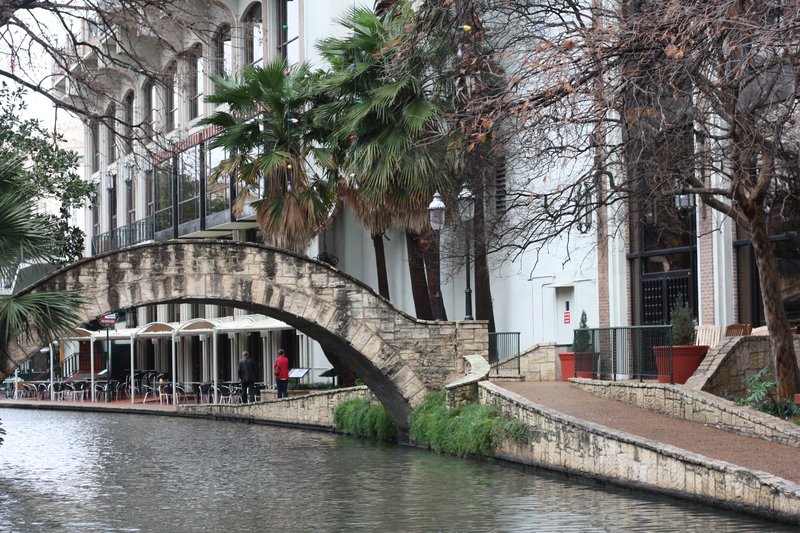 Of course, in San Antonio, the big deal is the Alamo, a former Mission house turned military barracks, taken by Texans from the Mexicans but then on 23 February 1836, the Mexicans came to take it back. The Texans were determined they were not to have it, as they saw it as symbolic of the success of the Texan Revolution. Unfortunately, after a 13 day siege, the Mexican forces were simply too strong for the 200 odd men inside and they took it back. Oddly enough, of those 200 men, two names remain famous but not really for the Alamo: Davie Crockett and Jim Bowie (of Bowie knife fame). I have to say, I was quite surprised at how small the place was: 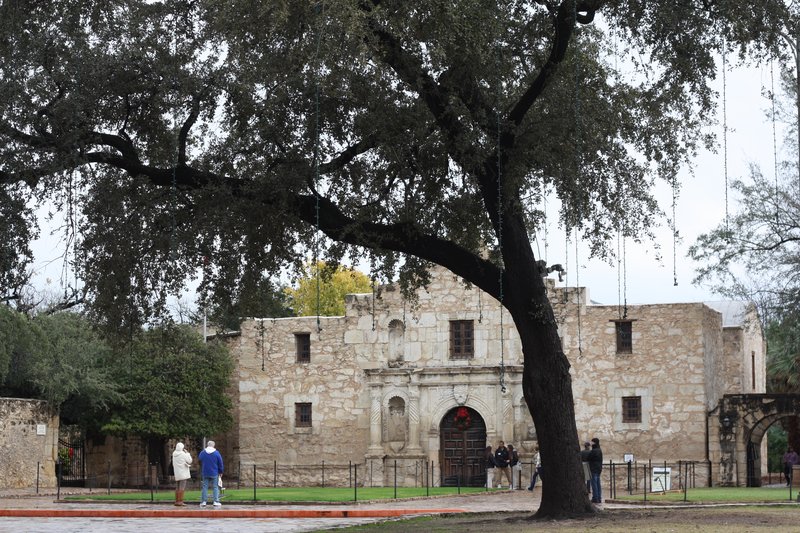 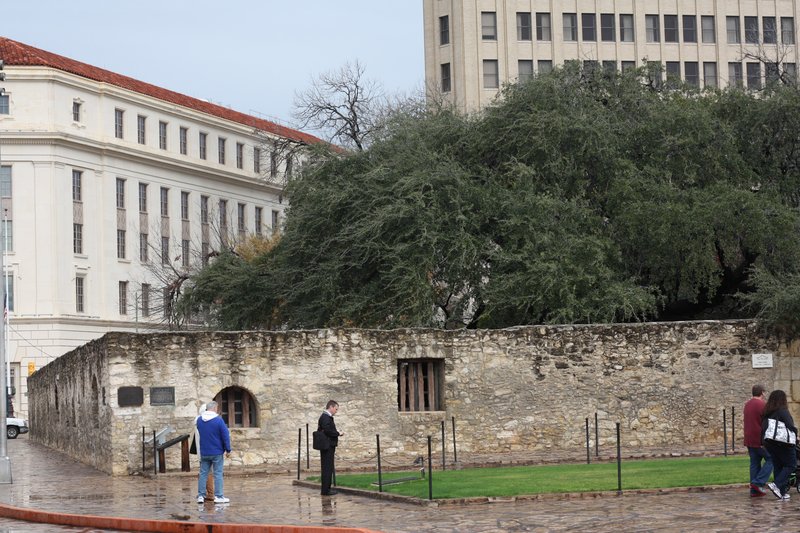 The surrounding street was interesting: it is old San Anatonio so the buildings are quite gracious, but tourists flock here, so the occupants are less than gracious - fast food joints mainly. 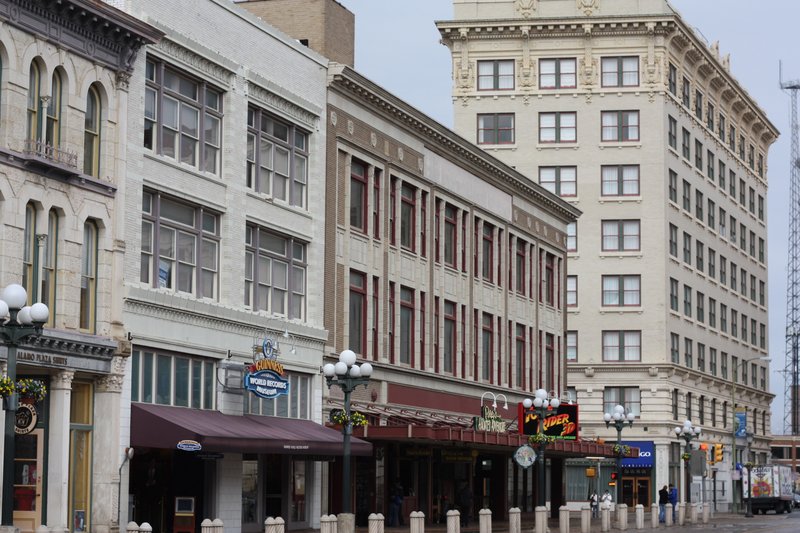 To the south of the centre is an area formerly occupied by German settlers, who apparently were not short of a dollar. For several blocks in an area called King William, the city is made up of tree-lined streets and grand old houses 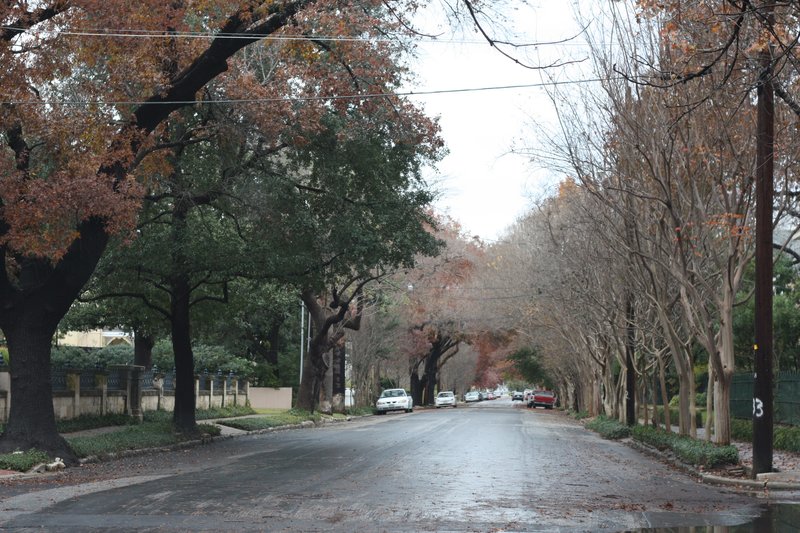 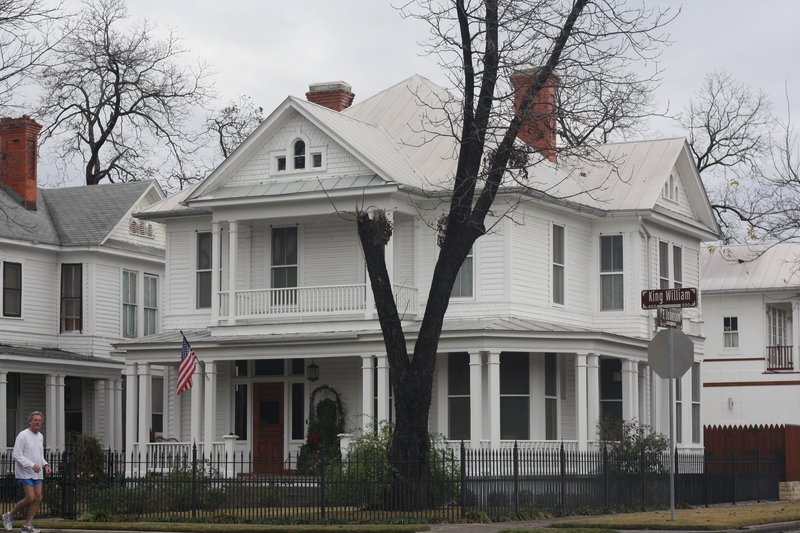 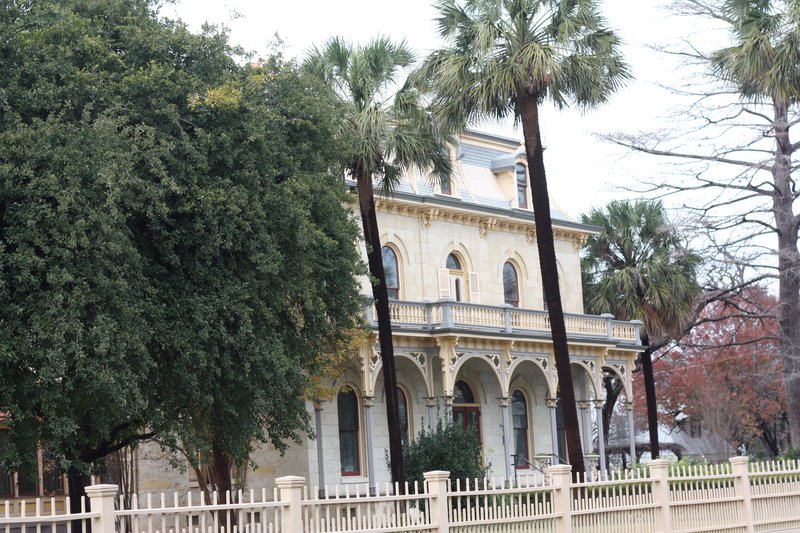 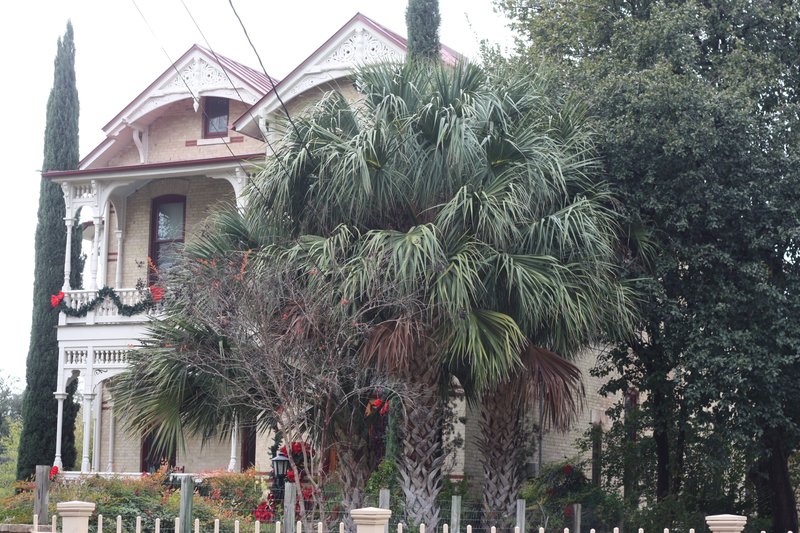 Heading north, I debated whether there was any point in going to Lockhart, as I was not going to be there until after 3:00 - too late for lunch and too early for dinner. I did go, and very much liked the use of brick in the town's construction and the flamboyant gestures of the city hall in particular, but to a lesser extent the library. 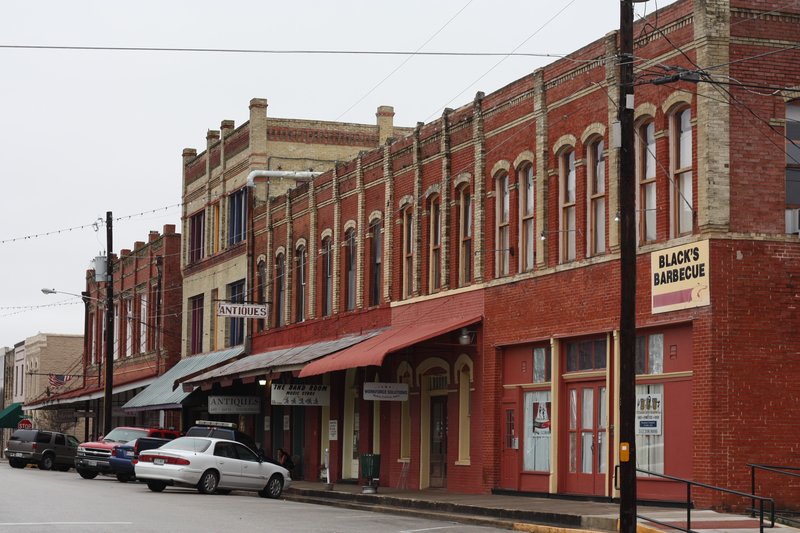 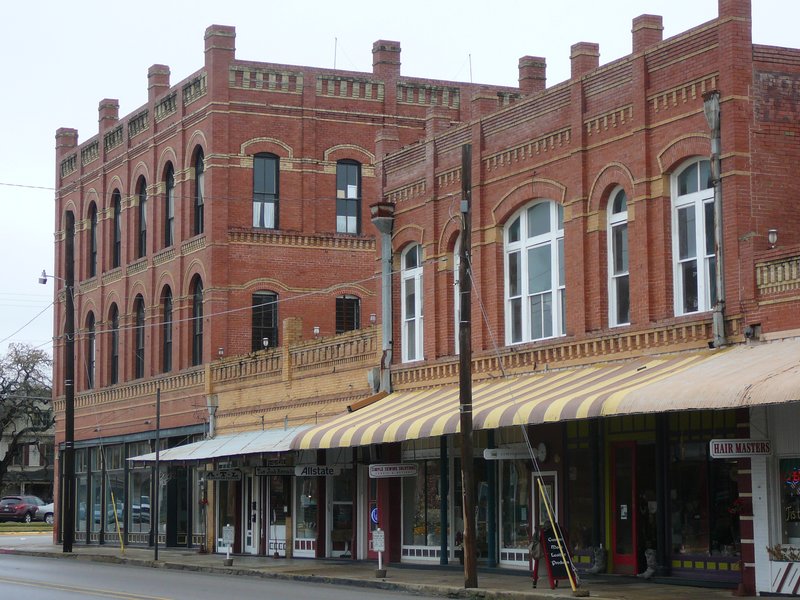 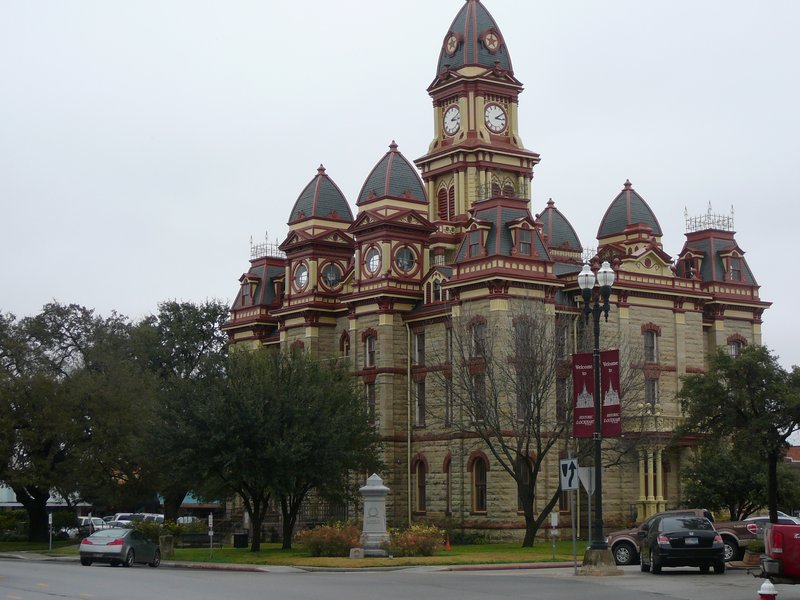 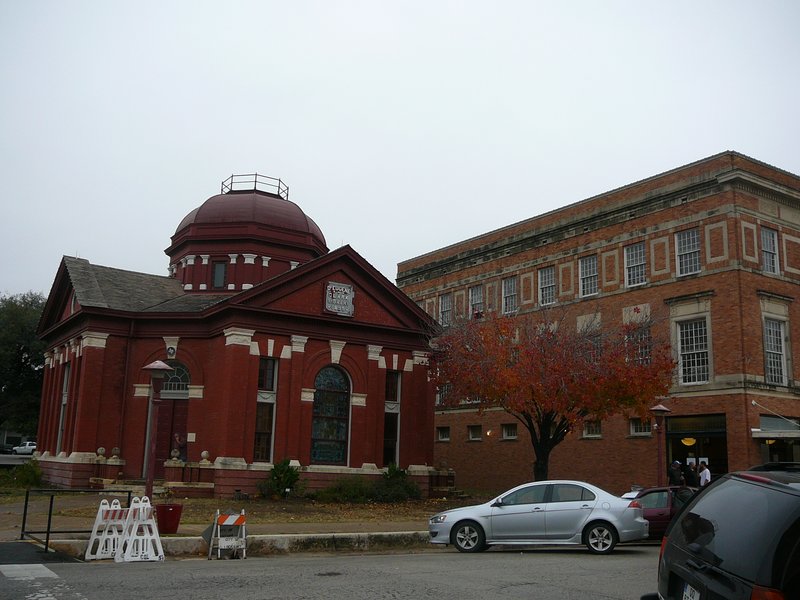 Now, the point of going to Lockhart is that it is the barbecue capital of the world: I had this weird notion that it was a small place with its four barbecue places all within spitting distance of each other. As it happens, I only found one of those places, and as it happens, I didn't like it: the meat was very tasty but so dry I couldn't eat it. I suppose I could have smothered it in sauce but that would have defeated the purpose of getting barbecue. So I left quite disappointed and hightailed it to Austin, where I became very lost - mainly because I knew exactly where I was going from spending a week here a few years ago. Because of that week, I decided to just stay the night and move on. Even so, I only made it as far as Abilene the next night, which is only 220 miles up the road and another stay the night and move on sort of place - I liked the library and not much else. Oh, and a surprisingly good meal in a Chinese restaurant, which is either in the best 100 in the USA or is actually the best in the USA: I've seen both claims made. It was pretty good, but I couldn't possibly comment on its national ranking.

My route took me through Lubbock at around midday, so I stopped to see what it had done to honour Buddy Holly. The first thing I noticed as I drove around its bumpy streets (who makes their streets out of brick??) was Buddy Holly Drive, the most prominent occupants of which were the various courts and a detention centre. But there is a Buddy Holly Center, which is not on Buddy Holly Drive or anywhere near it but is on Crickets Avenue. It is in a building which used to be a railway depot, although it has been quite dramatically altered and expanded, to the point I had no clue as to its origins. It is now used to celebrate Buddy Holly himself, West Texas music generally and also has a wee art gallery.

The lady selling me a ticket either did me a kindness or insulted me: she charged me the seniors rate. The collection was a bit odd, to be honest. There were lots of bits and pieces with typewritten notes I couldn't read. It turns out that some of those bits and pieces included homework he did as a kid, his leatherworking set and a few things he made. There were quite a few old letters, but I found them hard to read so don't really know what their significance was. I do know that the guitar he was playing just before he died is here, and there are various quotes from other musicians (notably the Beatles, the Rolling Stones and Elton John (who started wearing unnecessary glasses to honour Holly) to indicate that but for Holly and the Crickets, they may never have started. It really is quite amazing that he had 25 hit records, all before his death at 23. I'd done pretty much nothing by the time I was 23 except go to uni and get a job. They weren't the only ones who thought he was special: while in New York, he met a girl called Maria, and they became engaged the same day and were married within a couple of months. I even have a photo of the wedding 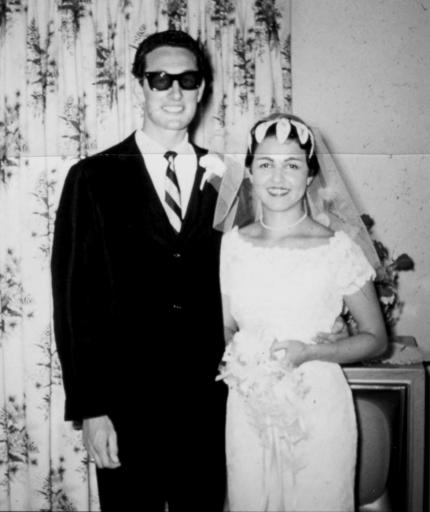 There are various murmurings on the internet which suggest that the collection might have been better if his widow was more co-operative and that there is a better rock'n'roll focussed collection in Clovis (which is where Holly actually did his early recording).

Lubbock itself is a very unappealing place, so I decided to just hit the road and see how far I got: quite accidentally, I got as far as an old Route 66 town in New Mexico called Santa Rosa, where I stayed in an old motel which had been built to serve the needs of the Route 66 travelers. It had much smaller rooms than I have grown accustomed to but was spotless.

I had another day on the road with little to excite me the next day. I did pop in to Las Vegas, New Mexico, out of interest - I doubt it shares many features with its more famous namesake. I went in to check out the historical centre, 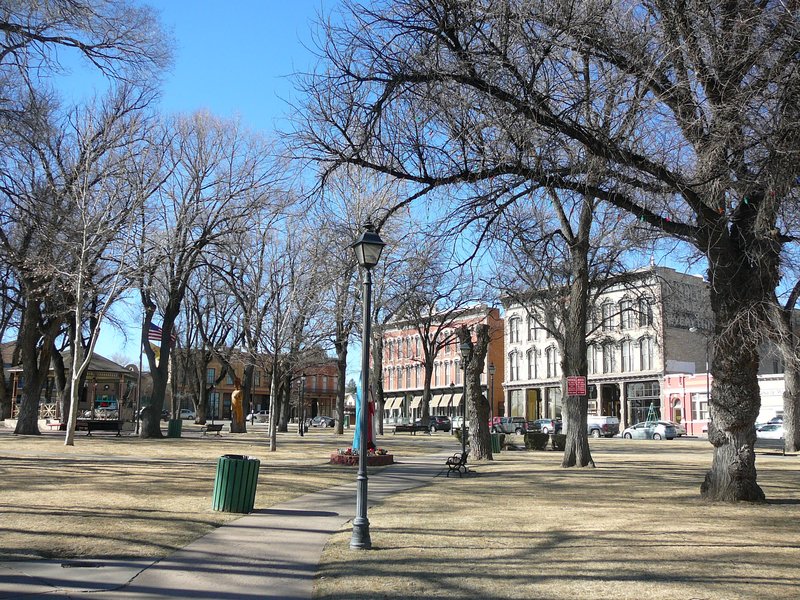 and was sold the worst cappucino I have ever had (so Dargaville is now off the hook): I don't think the hot drink I was given had either coffee (it tasted of barley and caramel) or milk (it was yellow) but it certainly had a lot of sweetener. It came out of an automated machine, not the proper esperesso machine I was expecting her to use.

I was very surprised, walking down a rather nondescript looking street, 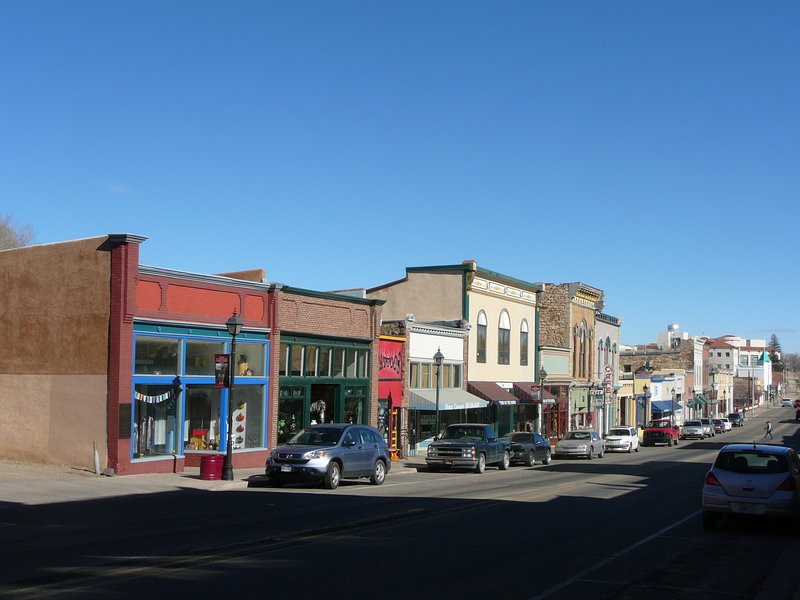 to find a rather good bookshop, although the name is a bit cheesey: Tome on the Range. They had a really good, eclectic range of books, books I would have been happy to sit down and read (if only there was a decent coffee shop nearby in which to do so).

My destination was Santa Fe, New Mexico: I'd read enough about it to make me think I'd like to spend two or three nights there - it has a huge artistic community, lots of museums and great writers such as George RR Martin and Cormack McCarthy live there. I drove over the crest of a hill and had the place laid out before me, but was confused: against the brown of the earth, I could see light reflected off windows but could barely see any buildings. That's because the city has an ordinance (dating back to 1912 and passed to stop Santa Fe being Anywhere USA) which requires all buildings to be in pueblo style and to be painted in earth tones: it was quite a remarkable effect but once I started driving among the buildings, it seemed enormously contrived and too many of the buildings seemed to be made out of shit-brown plasticene. 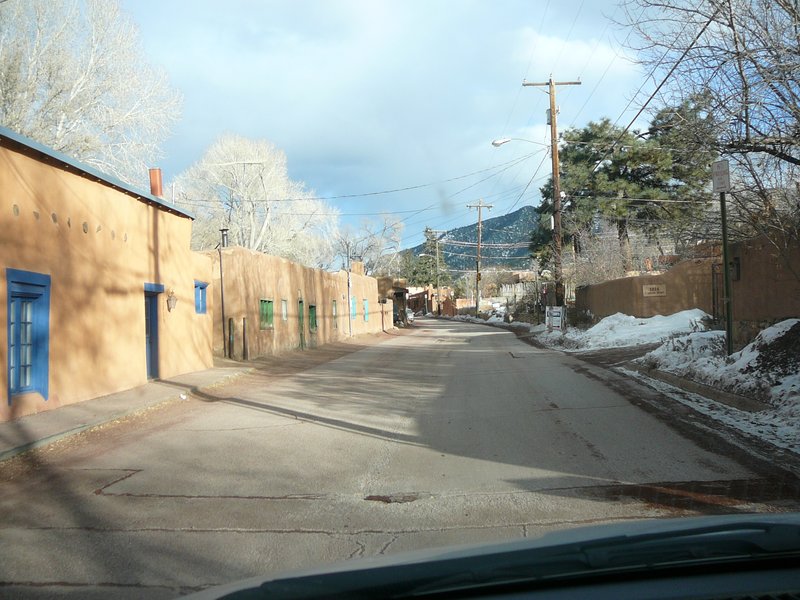 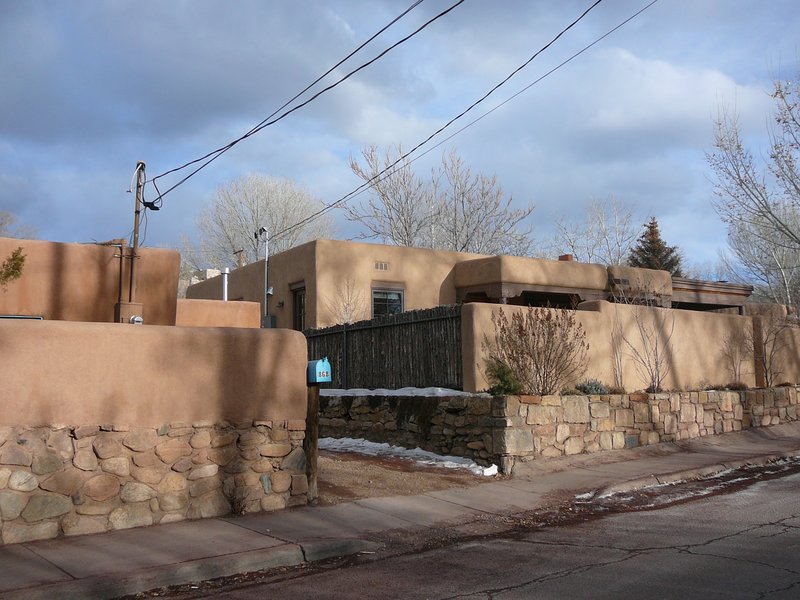 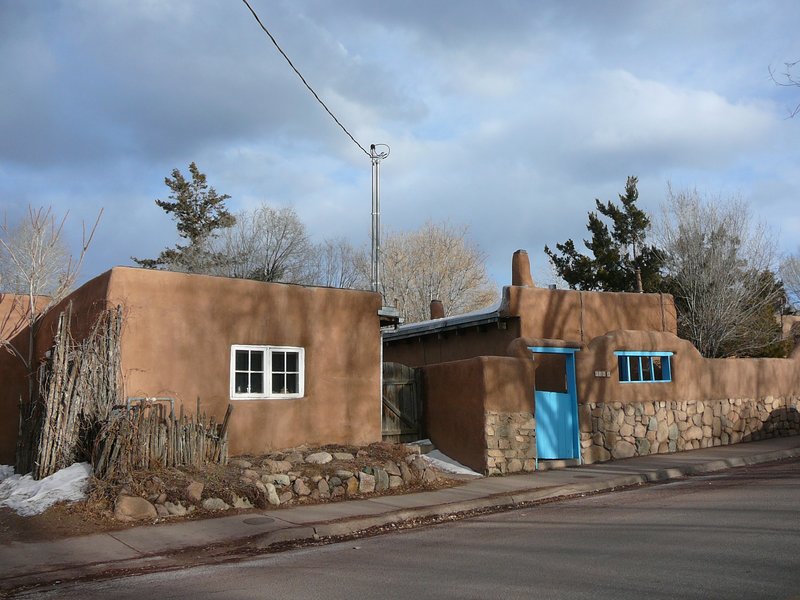 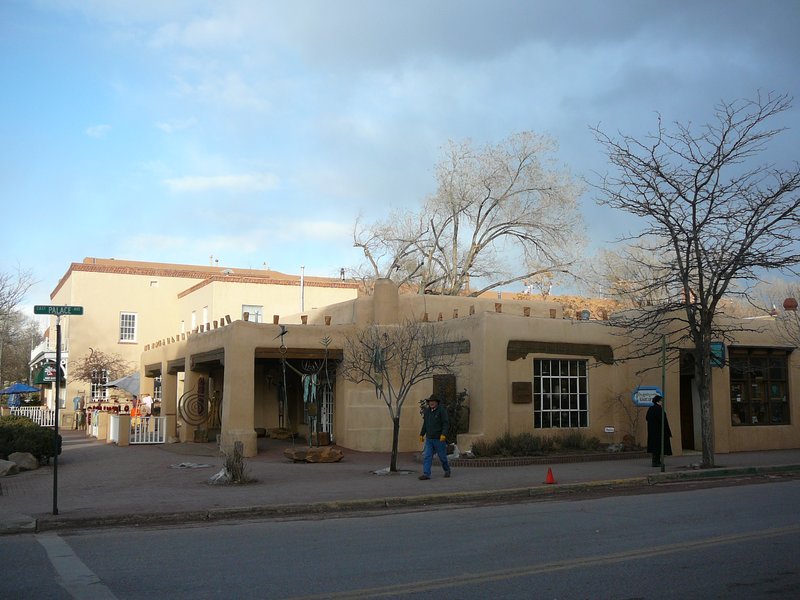 So while Santa Fe has a long history (it has been occupied for more than a thousand years and is the third oldest European settlement in the country) and has an important Cathedral, 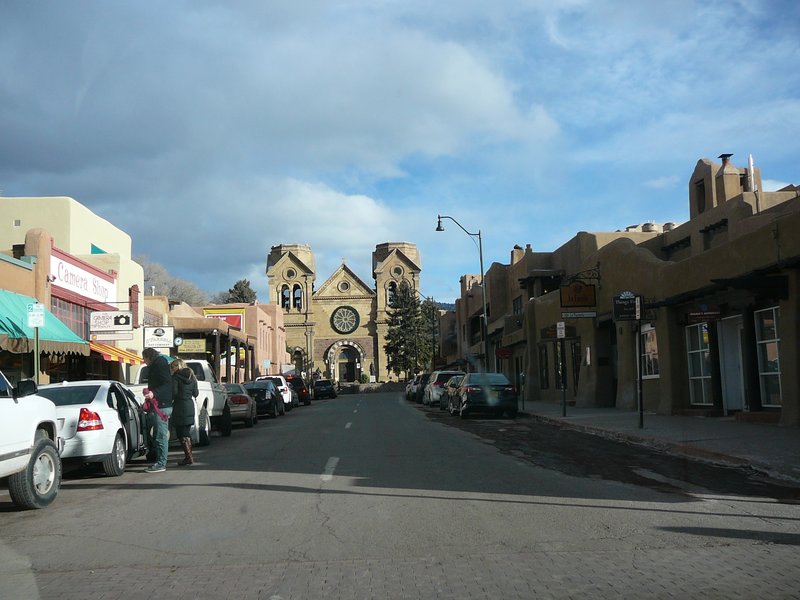 I really felt a strong need to get out of the place, which I did after about three hours. Sorry Santa Fe.

Posted by NZBarry 23:16 Archived in USA