With all these towns I was visiting and not liking, I was beginning to think it was me, maybe the traveling was taking its toll? Then I hit Albuquerque, a place that many people do not rate highly. I really enjoyed my two nights there although, and I have no excuse for this, I have no photographic evidence I was ever there. It seemed like just a normal sort of place, without the pretentiousness of Sante Fe but much more interesting than the Texan cities. And it is huge! I was really just in the CBD: it is elevated and all I could see for miles was more of the city. I wonder what secrets lie out there.

I got in after dark, checked into the motel and thought that downtown would be the right part of town to get dinner. After wrestling with various streets that were supposed to get me through the Interstate, I was a bit disappointed by what I found there - just a collection of sports bars. But I knew that the main street was once Route 66, so worked out that by driving up it I'd be sure to find something to my taste. I sure did: the area around the University of New Mexico is replete with interesting places to eat and drink. I picked a place called Street Food Asia because it looked very modern and had lots of people dining, so many that I could't get a table and had to sit at a wee breakfast bar thing. Plus, I've been craving Thai food, something I have seen very little evidence of. The next night, after grazing on various things through the day and looking for something to eat quite late, I finished up next door at the Flying Star, a huge eclectic looking bakery and, shocking I know, had a lump of carrot cake for dinner. I guess it satisfies 1 of the 5+ a day. I didn't even scratch the surface of this town when it comes to dining,- on Tripadvisor, it shows 956 restaurants and Street Food Asia was only ranked #148! If that's the case, I'm thinking there must be some mighty fine food in Albuquerque. Something else I found in the neighbourhood: an old school cinema where I was finally able to watch Sister, a movie I missed from the festival last year, about a 12 year old boy who makes a living (for a while) stealing ski gear from rich people at a Swiss ski resort and has a troubled relationship with his sister.

I had a very long drive after Albuquerque: to Flagstaff, its about 340 miles, so I took the Interstate for once. It ran through the beginnings of the red rocks which flourish in Arizona in particular, and there is even a Red Rock Park at Gallop in New Mexico. 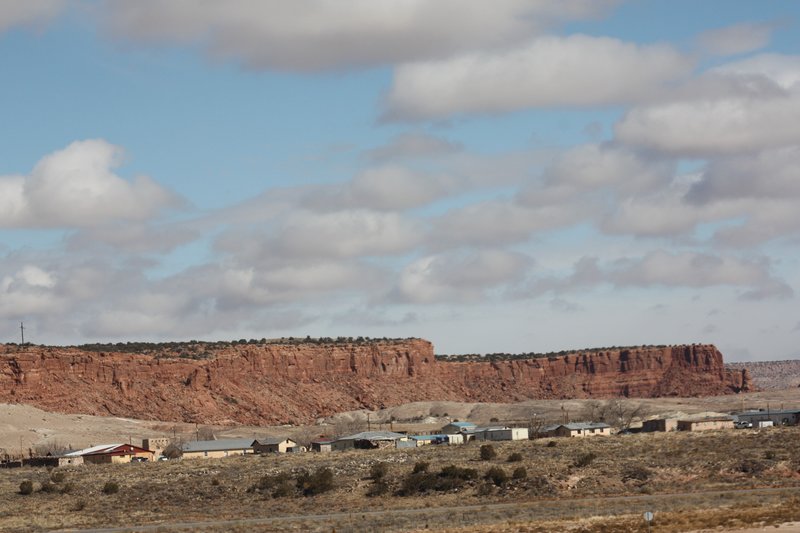 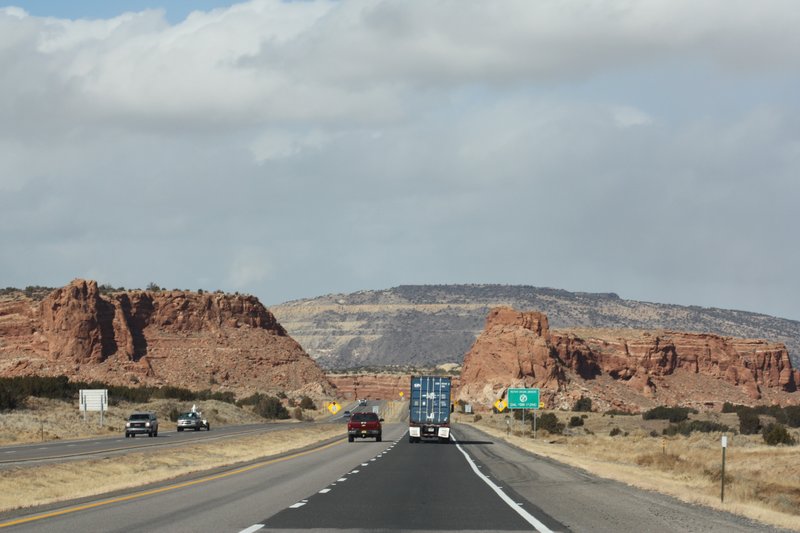 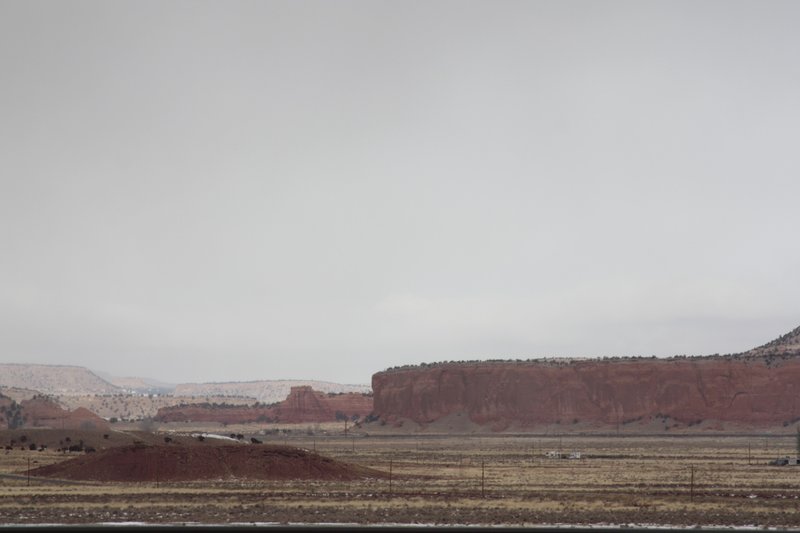 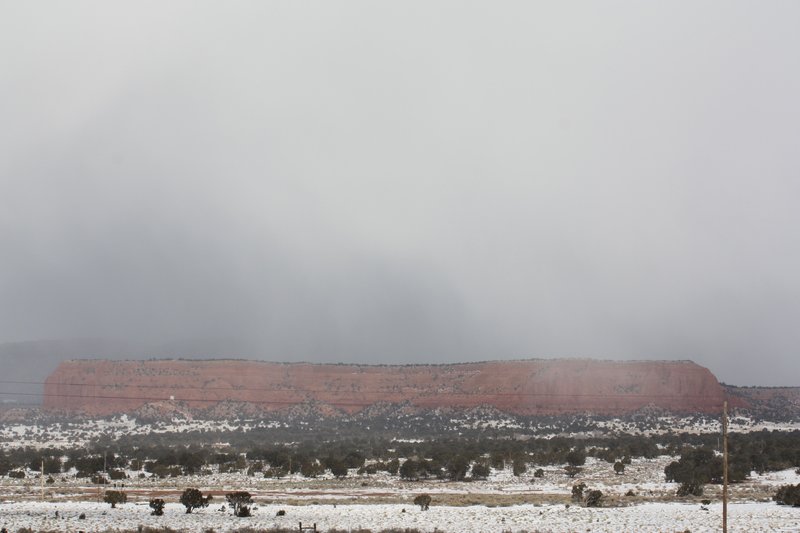 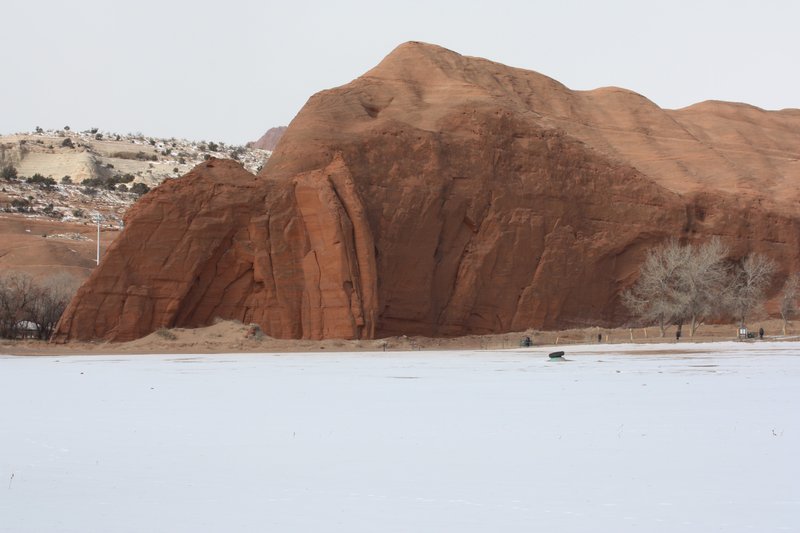 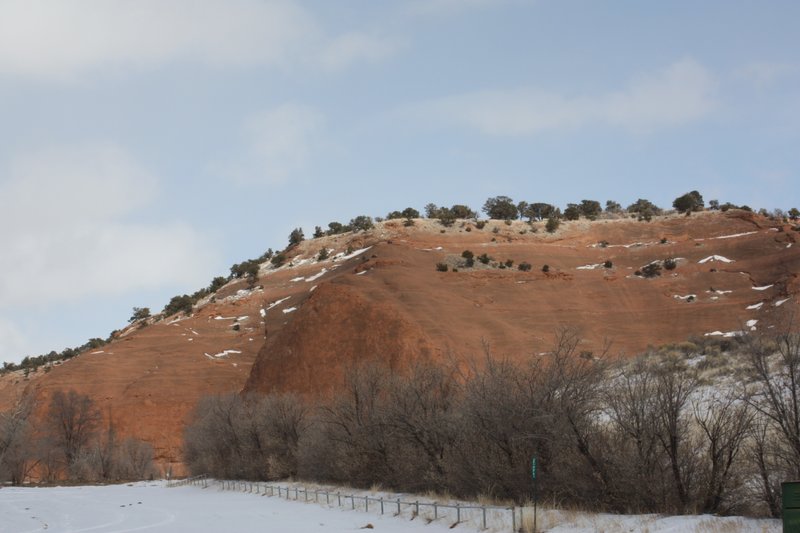 There was something I was particularly keen to see in Holbrook (AZ) so jumped off the Interstate and took the long way through town: if this place had been open, I would have stayed here but they seemed to be closed for the winter. 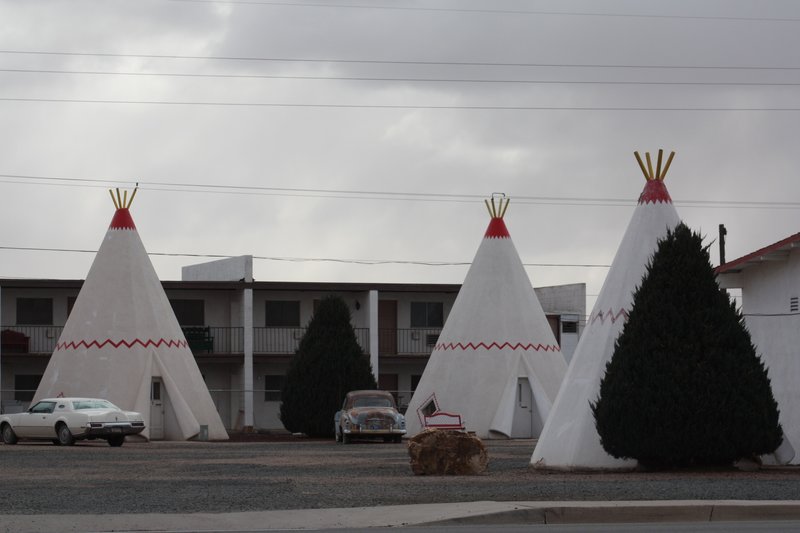 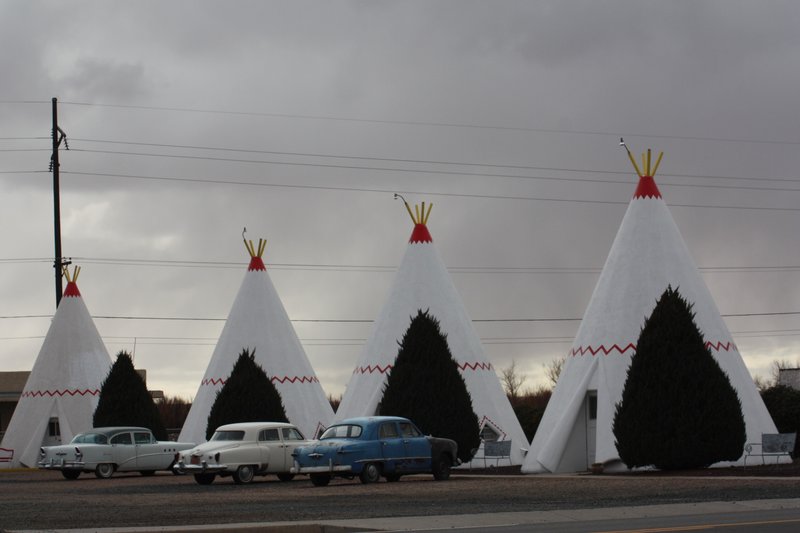 This is one of about three Wigwam motels which dotted Route 66 - there is another still functioning near Los Angeles, but I won't be going near it, and a closed one in Kingman. It is only about $60, so totally worth it for a unique experience. They have even parked old cars adjacent to each unit in order to add colour.

I found Flagstaff quite appealing as well, although very cold. I don't think the temperature got much above freezing the whole time I was there. I'd wake up and check the temperature and it would be 20 degrees below freezing point: even in fahrenheit, that's cold. Between noon and two, it would get as warm as it was going to. I was not very prepared: I had planned to buy a warm jacket, but after visiting a couple of malls along the way, couldn't face another. But I survived: I found a couple of very nice brewery bars and an exceptional coffee shop called Macy's European Coffee House which was always packed, and for good reason. I also found some really bad Thai food (there were at least four Thai restaurants so I thought I should try one. On my last night, I went to one of the chain restaurants, Chillis, because I had seen so many and was wondering what they were about - much the same as Applebees, as it happens. But something odd happened to me here: I had tucked in to my chicken and mushroom pasta and drunk vigourously of my Long Island Iced Tea (foolishly declining a second). When it came time to pay, the waitress said "don't worry, sir, it has been taken care of by another diner". What the? I don't think I was looking particularly down on my luck or attractive, so I have no idea why my meal was paid for (or even who by) so thanks, random benefactor in Flagstaff.

Now, I don't think many people come to Flagstaff just to be in Flagstaff. A mere 80 miles away is one of America's most famous tourist attractions. Now, I know I have been to Cambodia and spent a couple of weeks traveling about without actually seeing Angkor Wat, but I was curious to see what I would make of the Canyon: I must say, it is impressive. There is a road around the south rim which means you can travel about 30 miles along it to get different perspectives - it unfolds in curious ways and has brilliant red shades. Unfortunately, what with the fading light and the fact it was winter and my limitations as a photographer I don't really get the full brilliance in my photos but they give an idea, and of its scale. 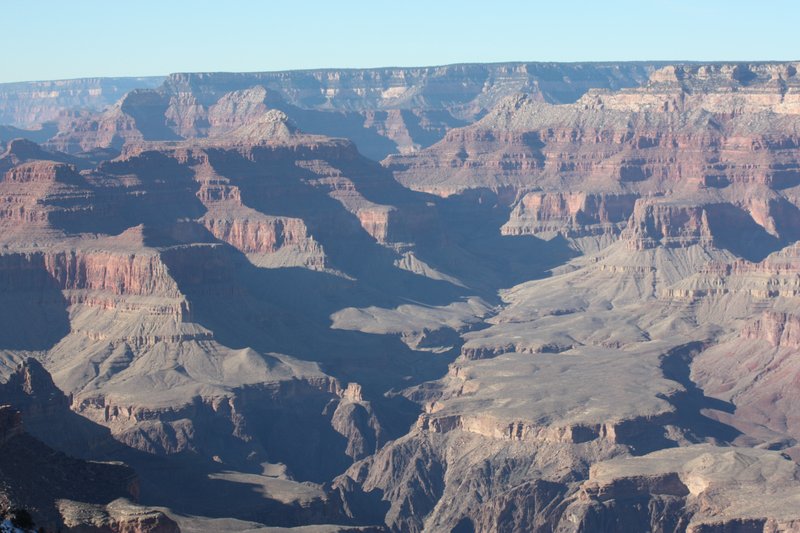 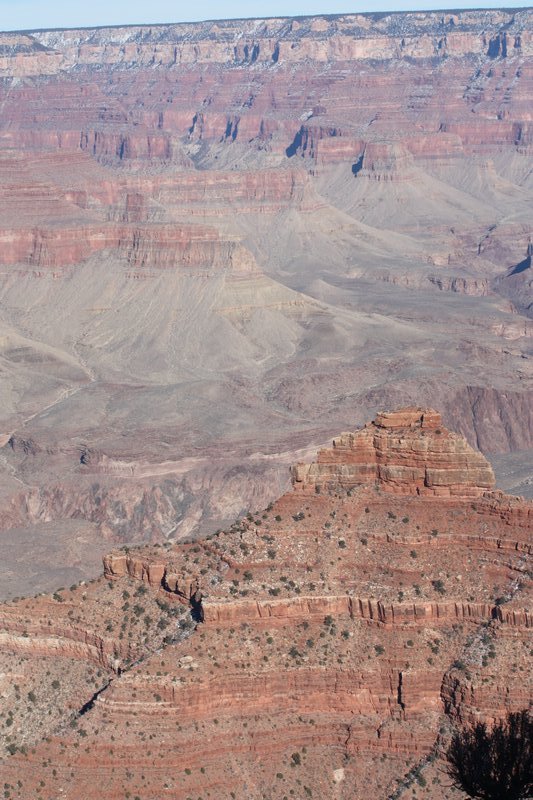 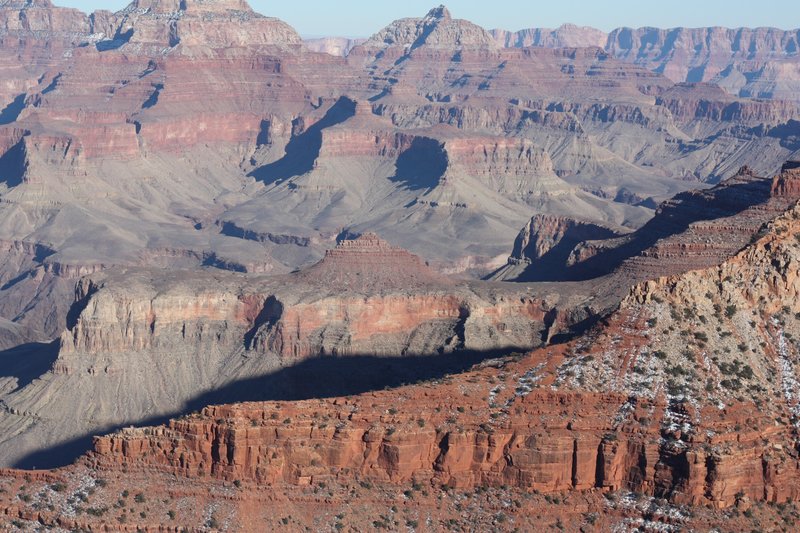 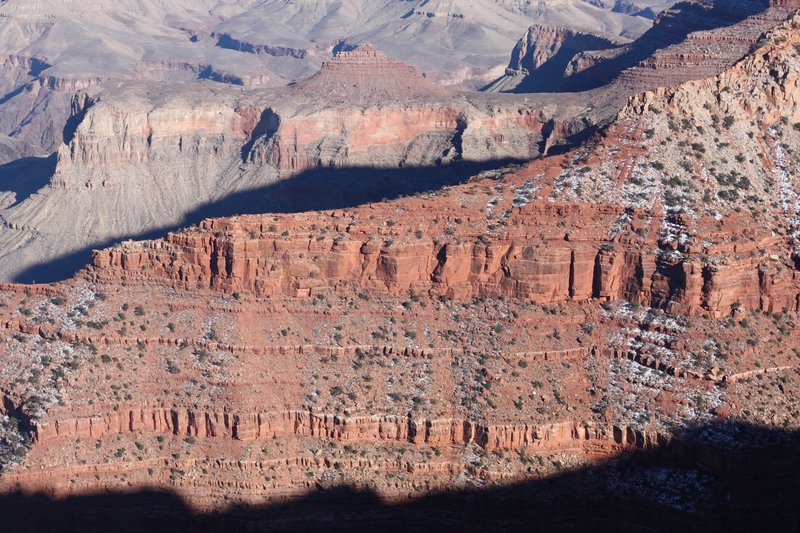 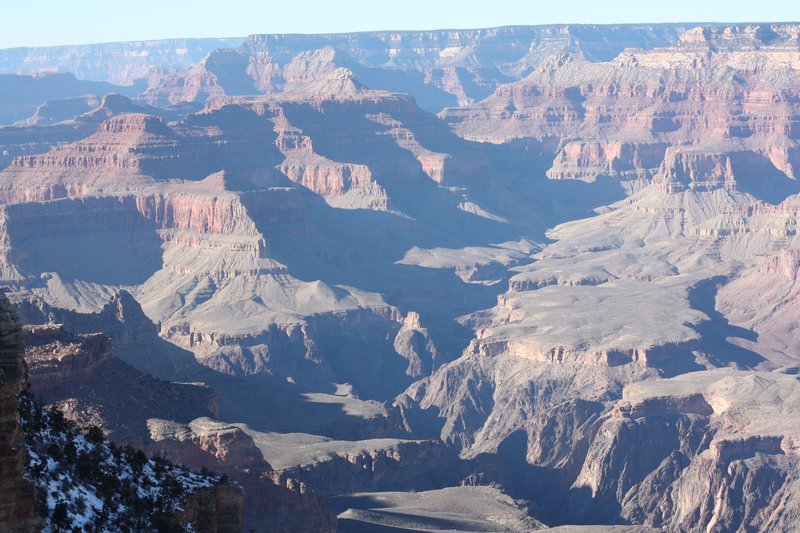 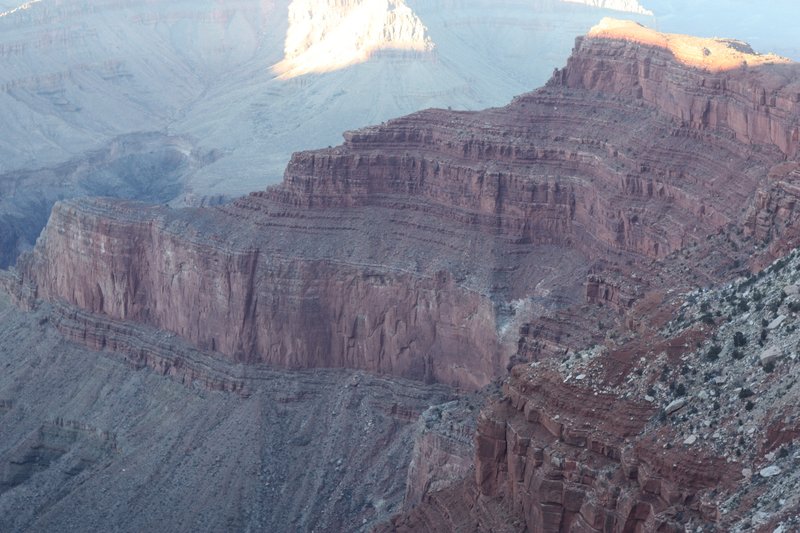 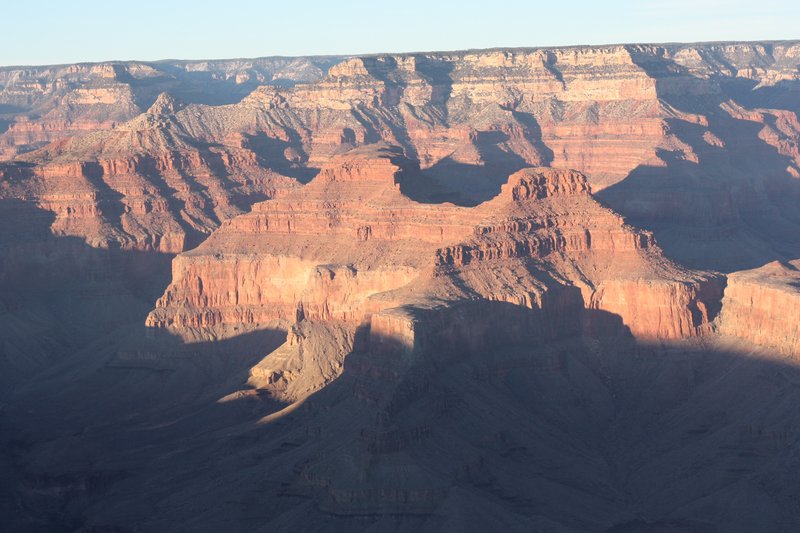 Posted by NZBarry 13:28 Archived in USA

The Grand Canyon truly is amazing

Yes, stay away from Chilli's, and Applebees! Yuk! You sure are drawn in my the restaurant chains...lol.

Just curious, Katie: it was part of the system for the trip to check these places out. But after Chillis - just the two and a near miss on another, and I stopped the fast food chains while in Texas.