So, there I was, in a motel in Barstow. I decided that dammit, I'd backtrack 110 miles and have a good look at the Mohave National Preserve. It is a much more low key place than Death Valley, and the Reserve was only established in 1994. It has a lot of Joshua Trees (which made me wonder why I paid to enter Joshua Tree National Park), the land was mainly rolling and its hills are quite a bit lower, although there are a couple of mountains which hit 8000 feet. Its big, though, 1.4 million acres. I watched a really cool video in the Visitor Centre, which showed a cross-section of life here, through the day and through the seasons: there's a whole lot more wildlife than up the road in Death Valley.

Since I had plenty of time, I started at its Eastern edge and paid a brief visit to a wee town called Nipton, with its tiny hotel and trading post: as far as I could tell, its main reason for being was the railway line (and looking at the town website, I'm not all that wrong - it is on the crossroads of two major wagon trails). 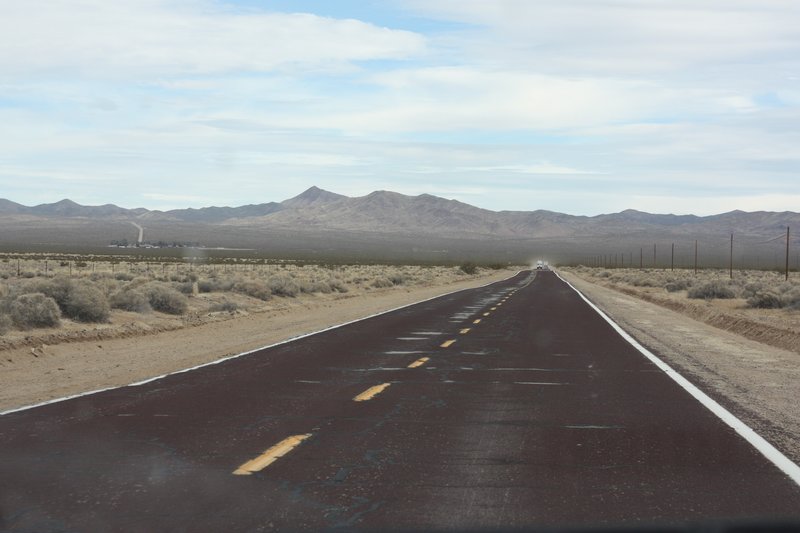 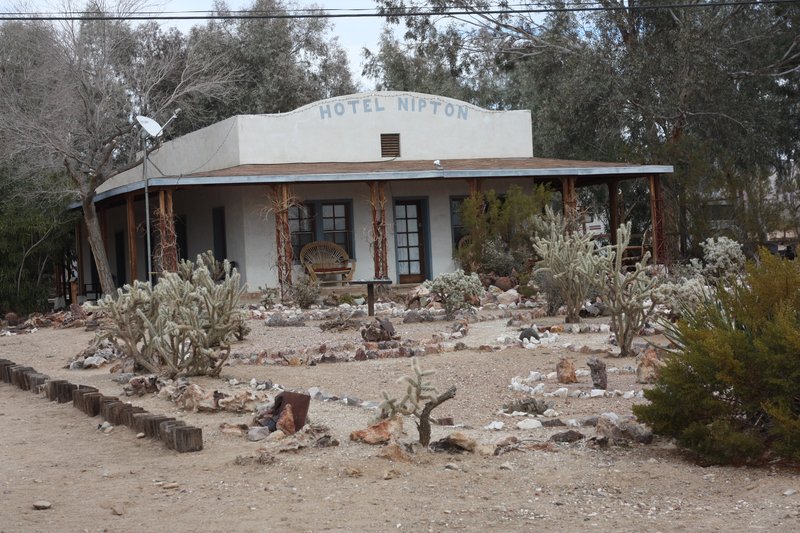 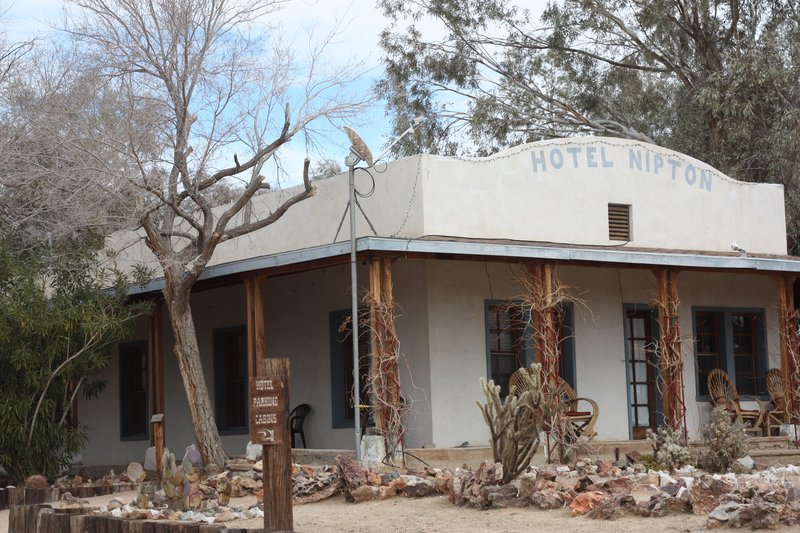 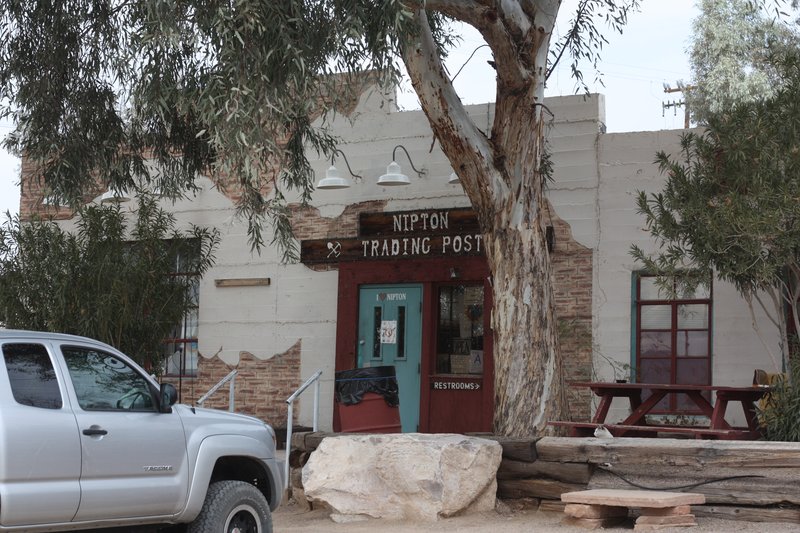 From there, it was a drive down to the centre of the reserve, through the Joshua trees (the biggest forests of them in the world are here, and apparently the biggest Joshua tree in the world, although I don't know where it is). 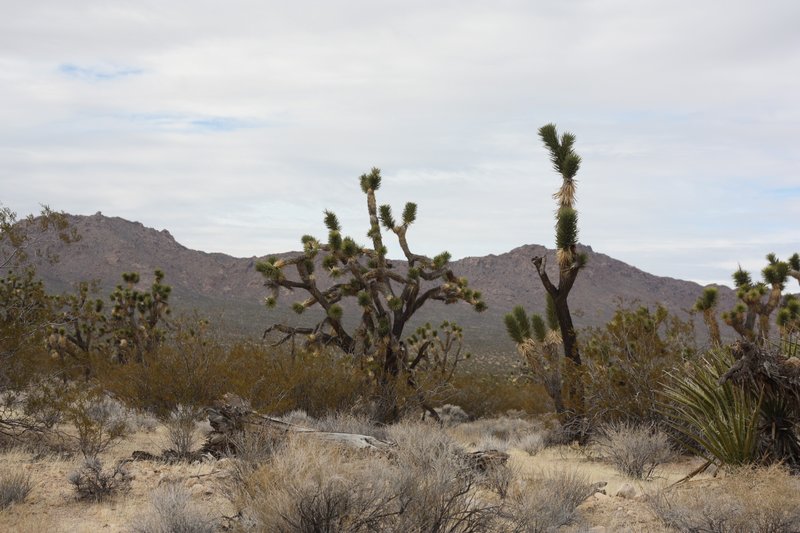 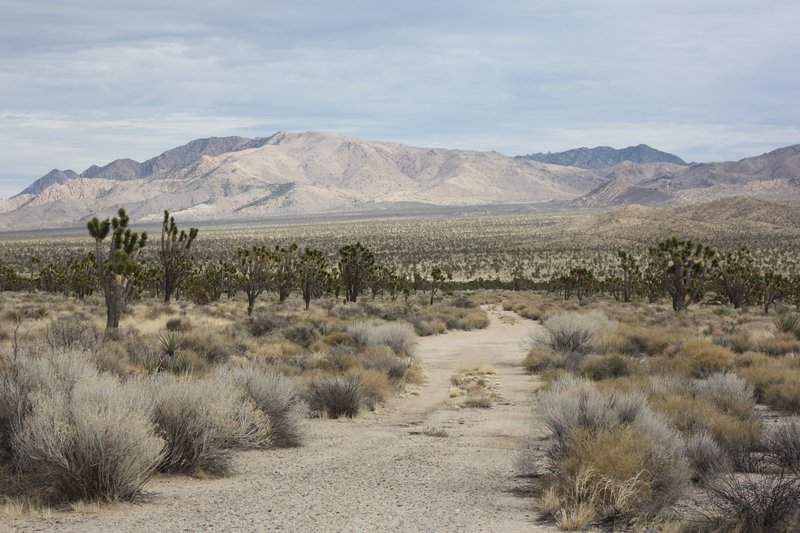 In the centre of the Reserve, there is a woebegone place called Cima, which was a railway town providing supplies for miners and ranchers. By the time I got there, was no sign of present life although obviously a site of prior habitation. I found it oddly moving, and looking at the photos I took while there am still quite taken by them. 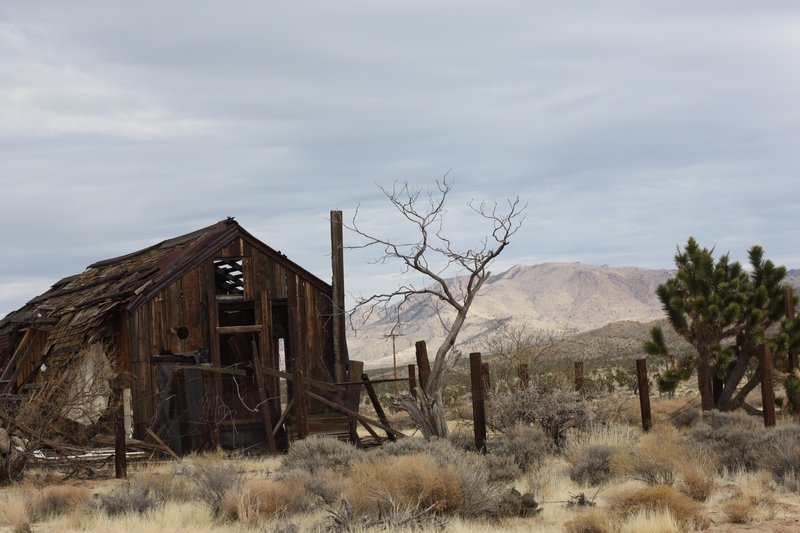 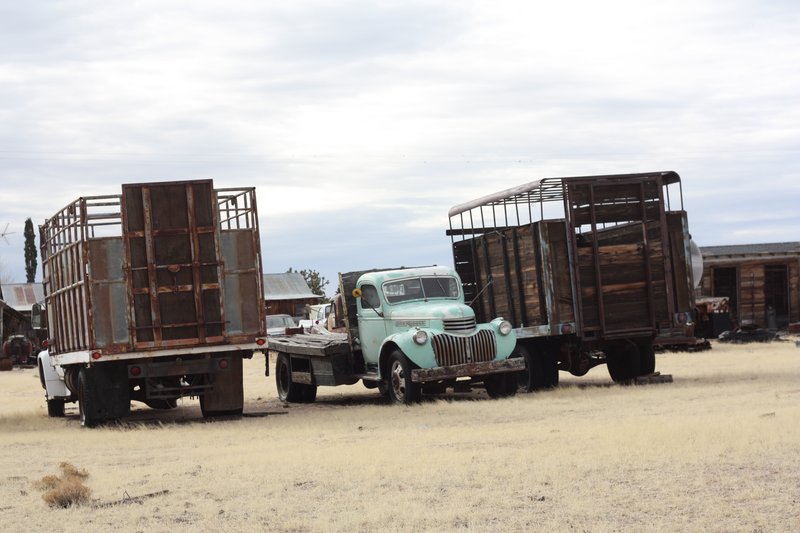 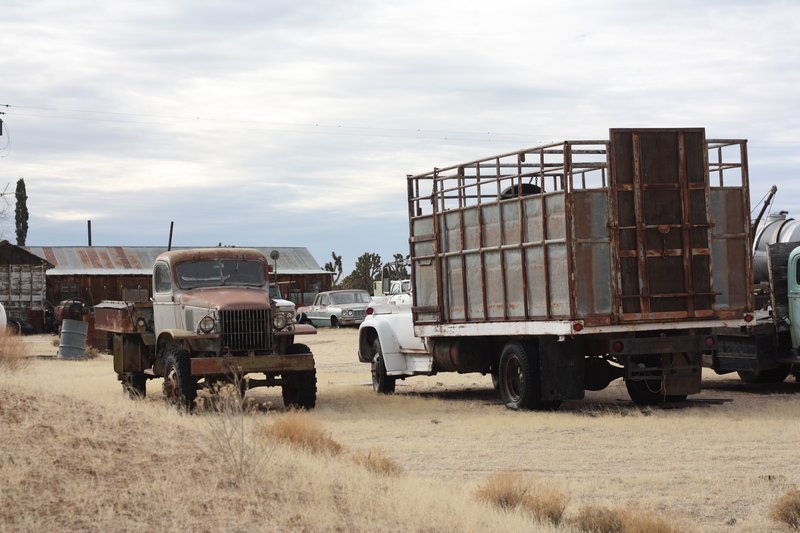 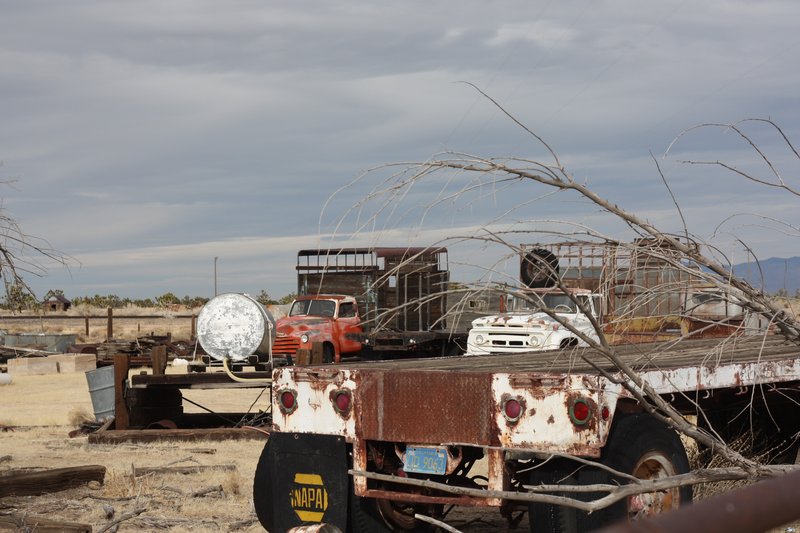 The signs were still out advertising ice creams for this shop, but I don't think it has been open for a while 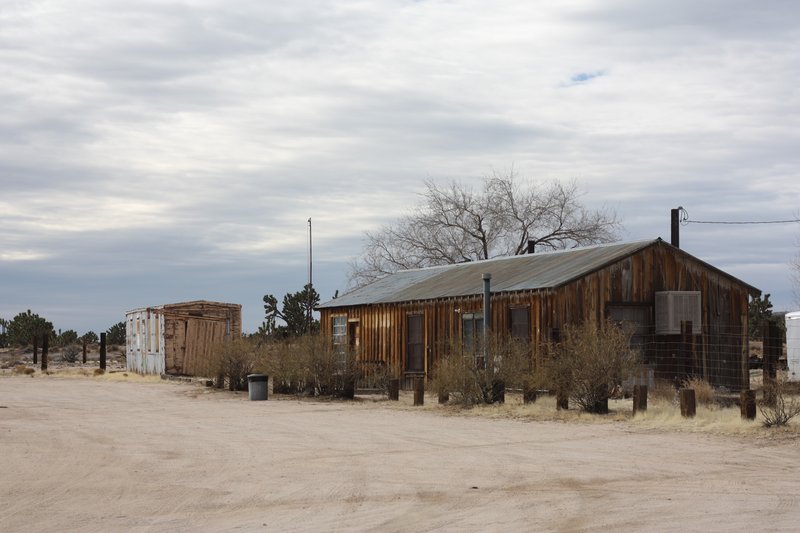 With all the old rail sites and the quite dominant railway line, I hoped I would see a train, and finally did, although it was a little incongruous in the desert. 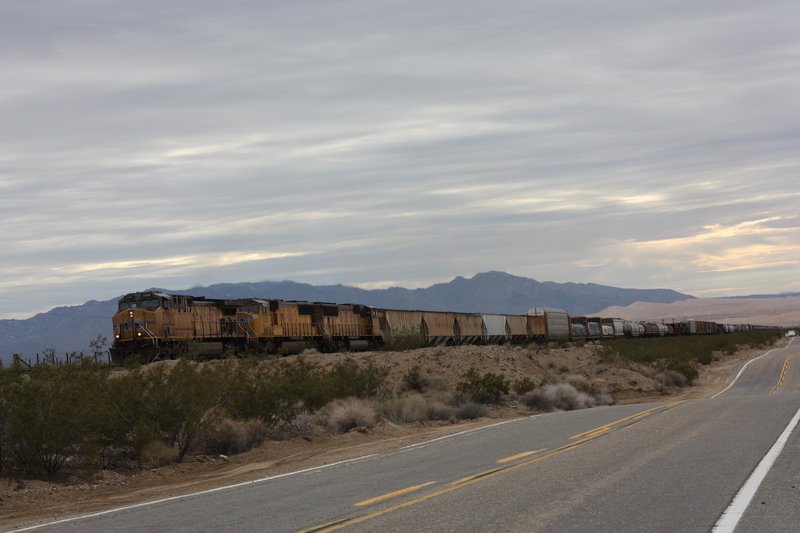 The one still occupied site in the Preserve, and the one place you can still get food and drink (although not on Wednesdays, which of course was when I was there) is Kelso Depot: established because it had plentiful water for the trains and it was also where they could add another engine for the hills to come. I was particularly interested because it has what is called a Harvey House - instead of just a railway station, it is a combination station, restaurant, hotel and dormitory for the railway workers - set up along the Santa Fe etc railway lines. This one was in particularly good condition, because it has been adopted as Preserve HQ: the top floors and basement have been set up with various exhibits to give an idea of the environment and also what it was like to live in a Harvey House, particularly as a railway worker. 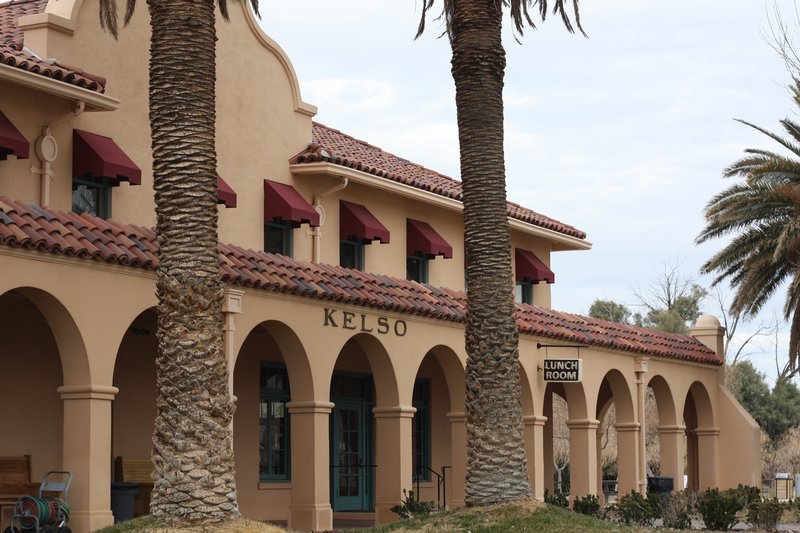 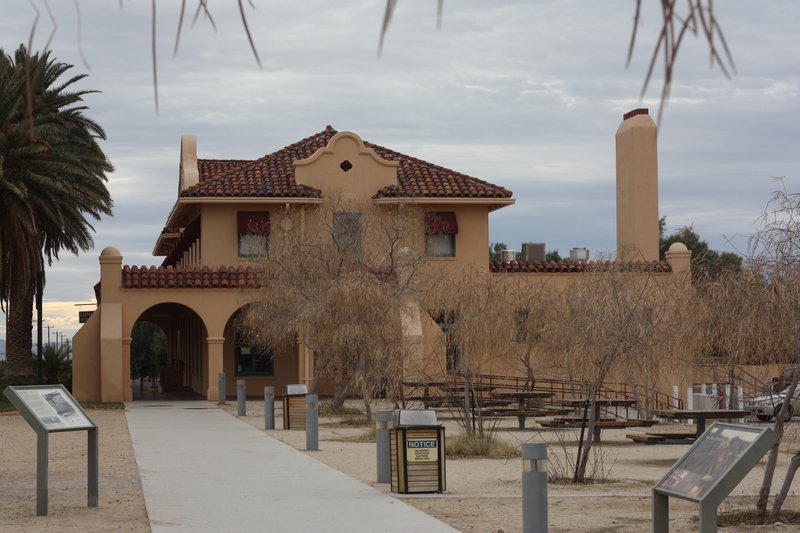 The Post Office wasn't looking so good and as for the jail, well, given the temperatures they have here, I wouldn't like to be an inmate. 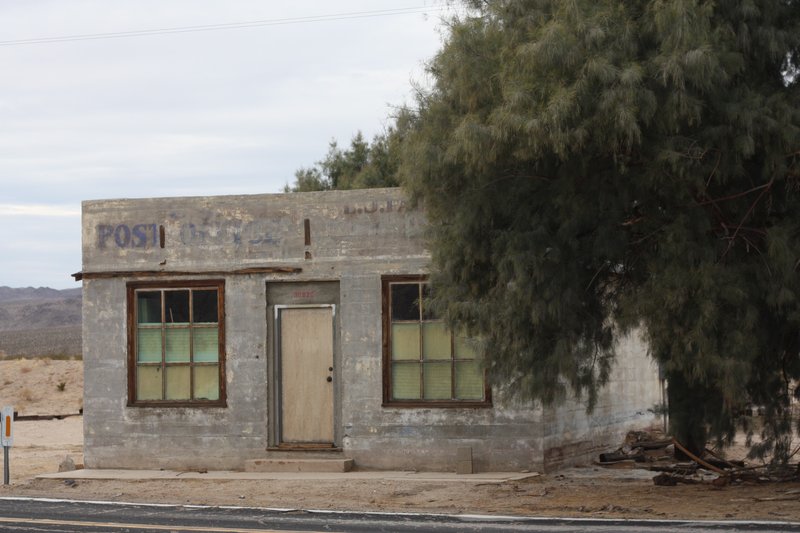 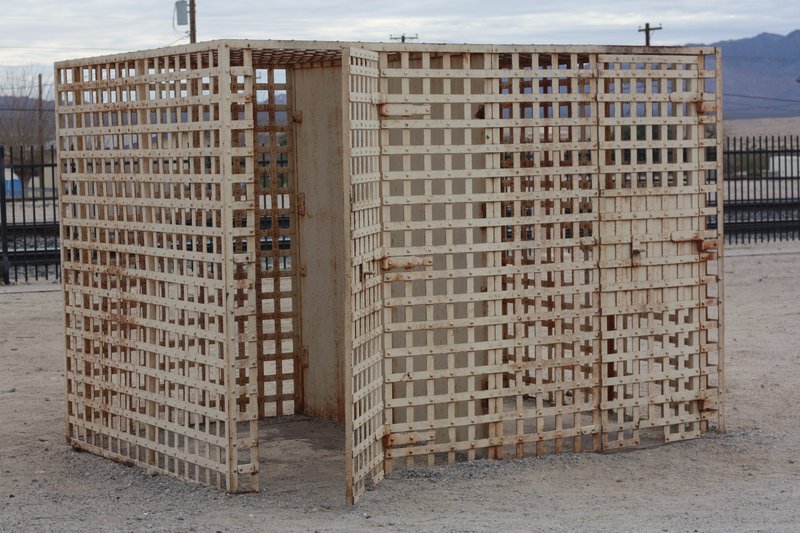 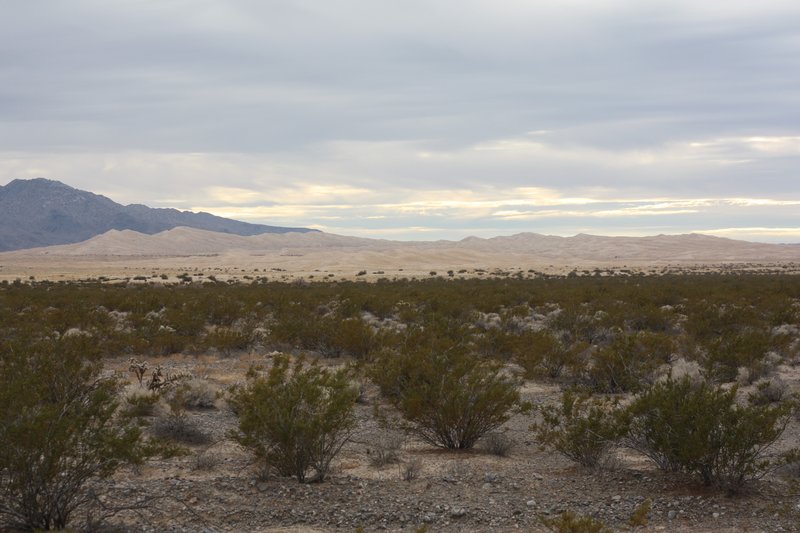 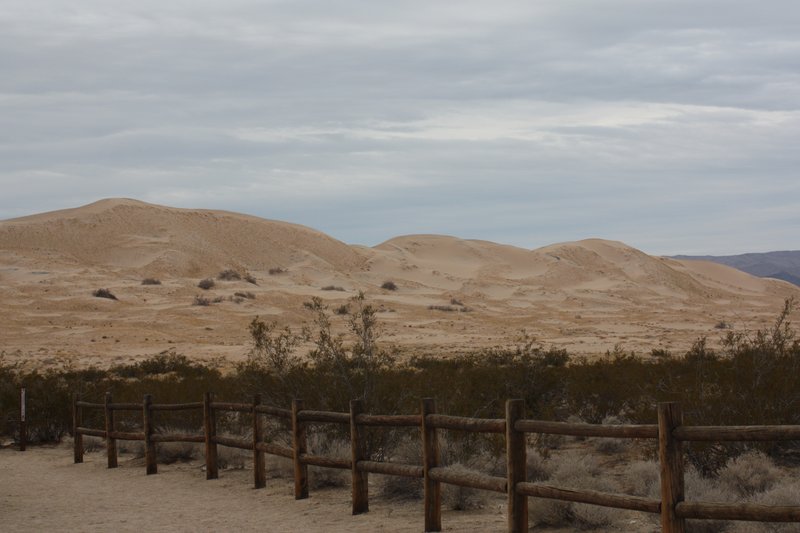 and then further south, I encountered more rock outcrops 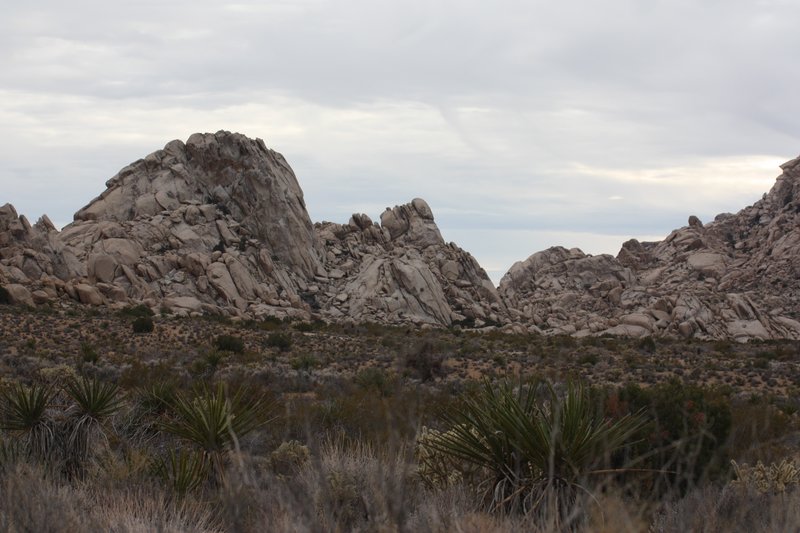 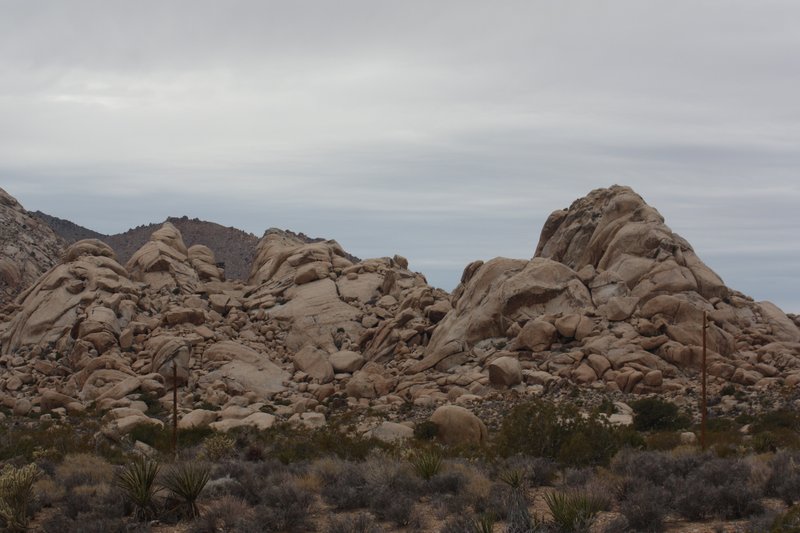 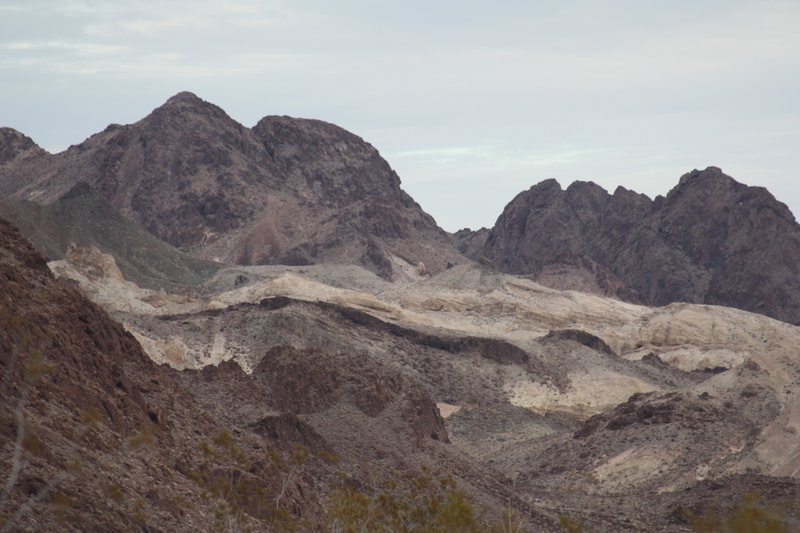 Funnily enough, after an extended drive along Route 66 in the dark, I found myself back where I started, in Barstow. This time, I went for the classic Route 66 experience, and checked into an old motel, which had tiny rooms, a friendly proprietor from India who finally helped me master a cable TV remote, circular beds in the rooms and a collection of memorabilia. 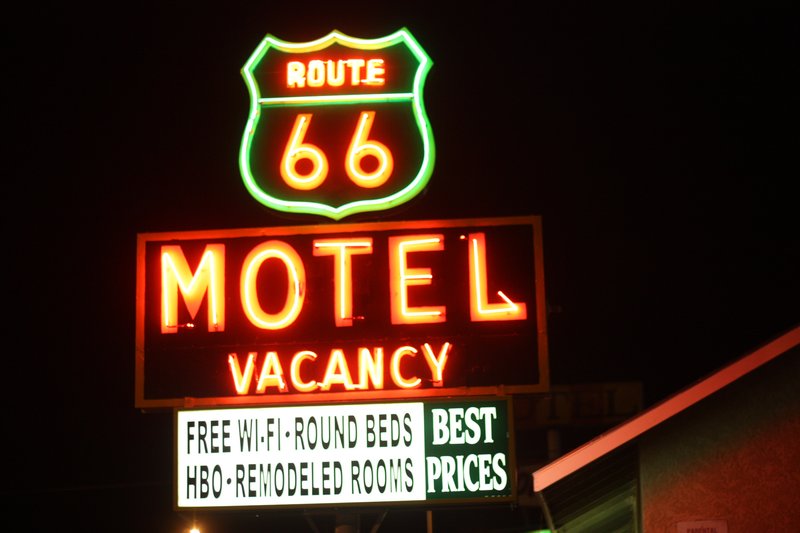 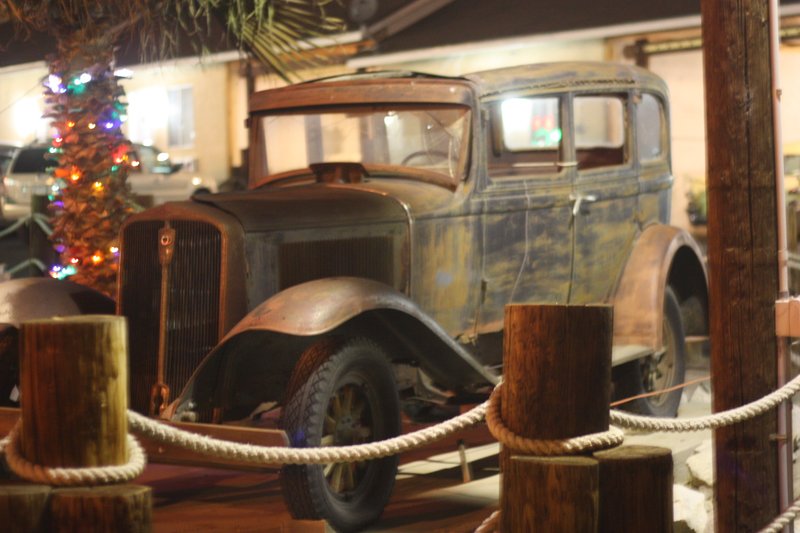 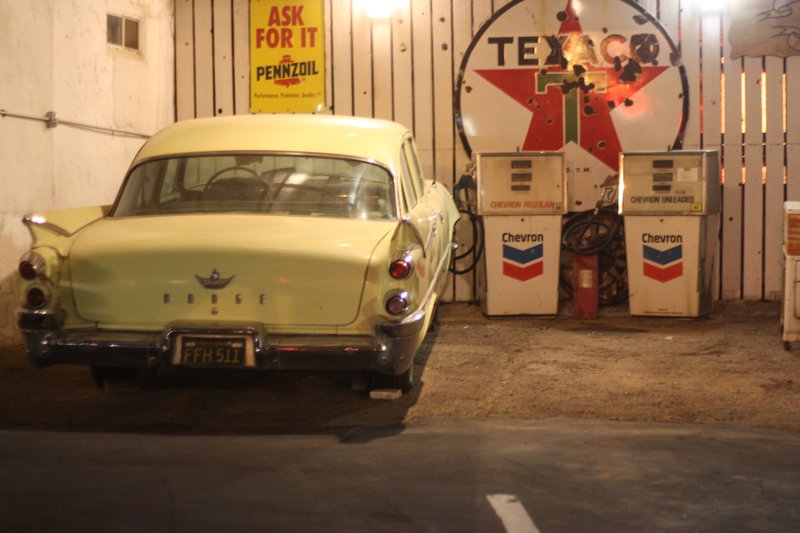 Now I really had to get a rattle on, as it was the day before the cheapest car in America had to be returned to his home. I had a cunning plan for my entry into Los Angeles: first, I'd drive along Route 66 until I found a proper diner for my last meal on the road. Molly Brown's Country Cafe filled the bill nicely and had the added bonus of a neighbour with a bottle sculpture. 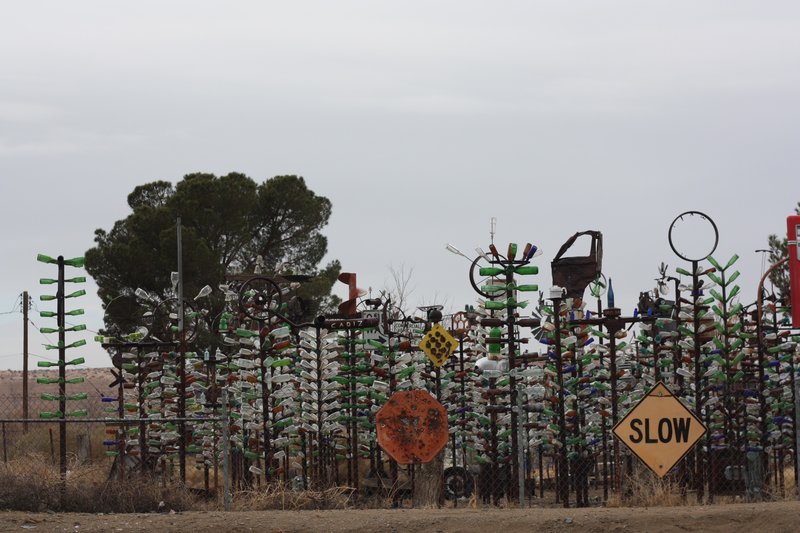 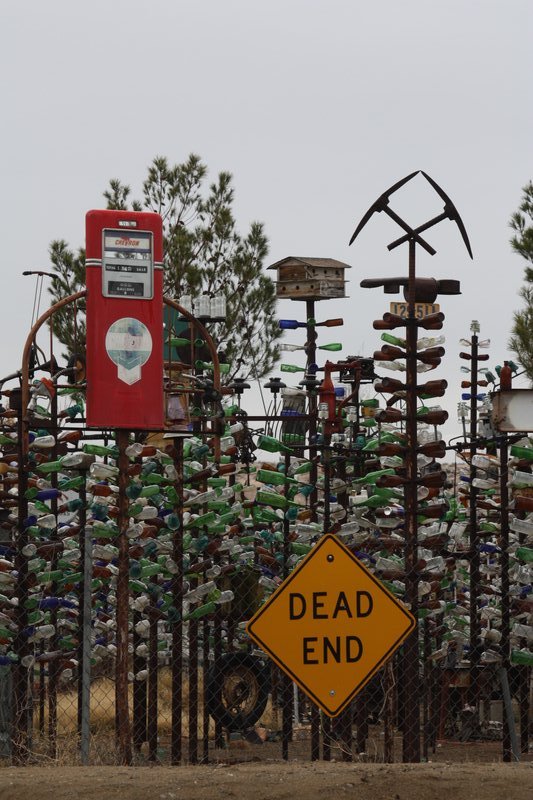 Then the plan was to take highway CA2, up through the lovely looking and sounding Angeles Forest 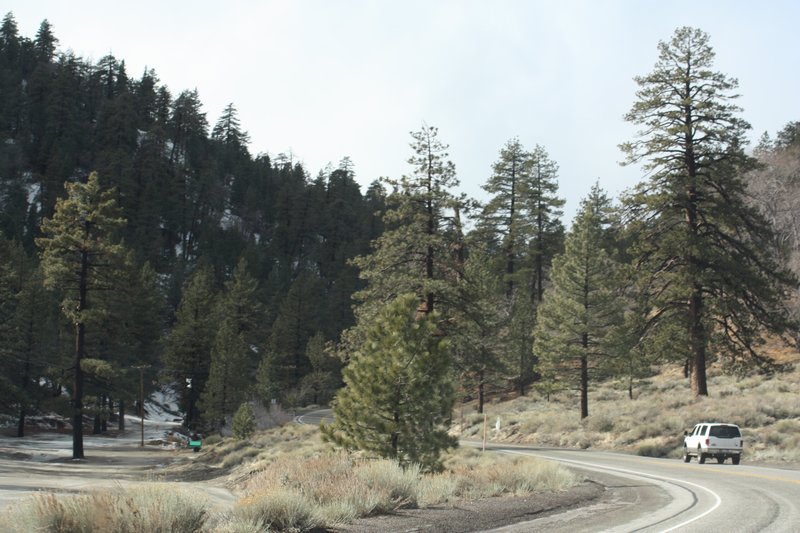 but, and I do find this a bit ridiculous as I've been to all sorts of places on the trip without any hassles of this sort, but I barely got through Victorville and found that the road into Los Angeles was closed! Closed by snow! So, I backtracked, found even more interesting rocks 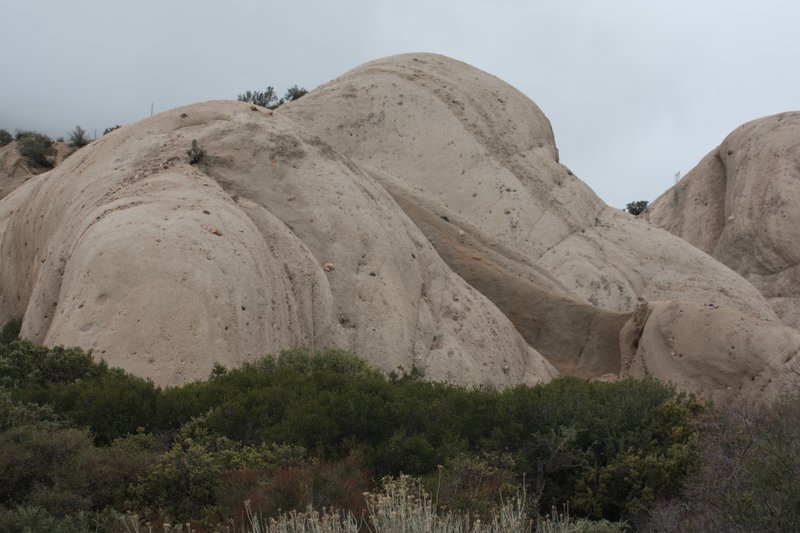 had a hideous drive on a freeway for 20 miles and a fruitless search for the Huntingdon Library and then realised I had a small problem. I was in Pasadena, but had a specific destination and very precise directions to it based on coming down through the forest, and could not find any of the roads my directions referred to. So, I basically had to guess on a road going in the right direction (south to Long Beach): the one I chose seemed to have a peculiar traffic management system of ensuring every traffic light was red. Thirty two miles of Los Angeles surface roads are no fun at all and took hours to get through. But, well, my destination made it all worthwhile. 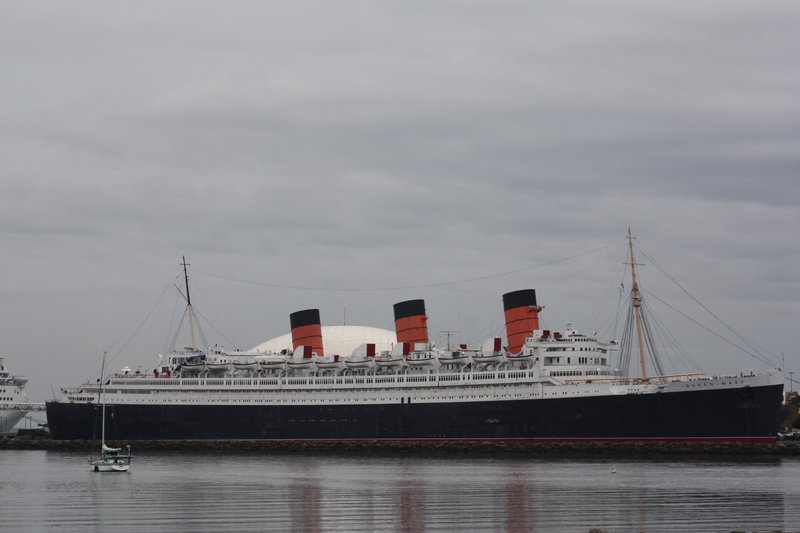 Posted by NZBarry 01:16 Archived in USA