The idea of inspecting an irrigation system might not appeal to all, or even many, but somehow it struck me as a very interesting way to spend my last day in Chengdu. I'm not the only one - on tripadvisor it ranks as number 5 of the attractions to see. I have to say that if I had spent all that effort getting there (it involved a rather fast train) and had just seen the Dujiangyan Irrigation System, I might have been a bit sad. Yes, it is something done 2,000 years ago, which is pretty impressive. I did read a couple of detailed descriptions before I went, but for some reason the Great Fire Wall has decided to rear its ugly head and I can no longer connect to them. Essentially what they did was set up some diversions in the river 100 km north of Chengdu, with two objectives - spreading the flow so that there was better access to the water and also to provide for flood spill-offs. But that would not be all that interesting today, as there would just be some rock formations to see - I am fairly sure that people would look at these things and be a bit meh about the experience, to put it kindly: 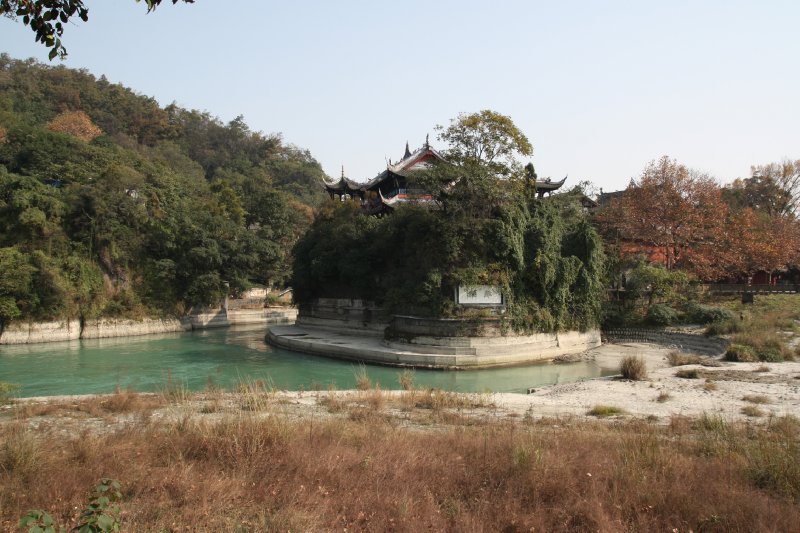 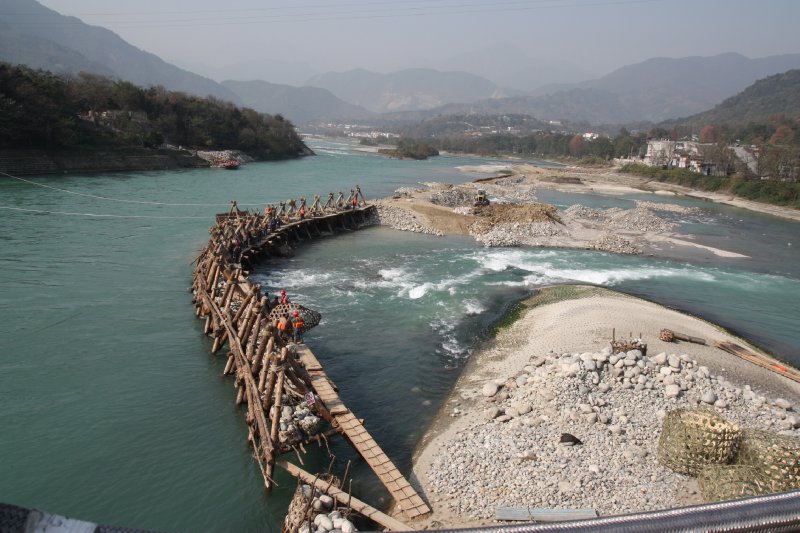 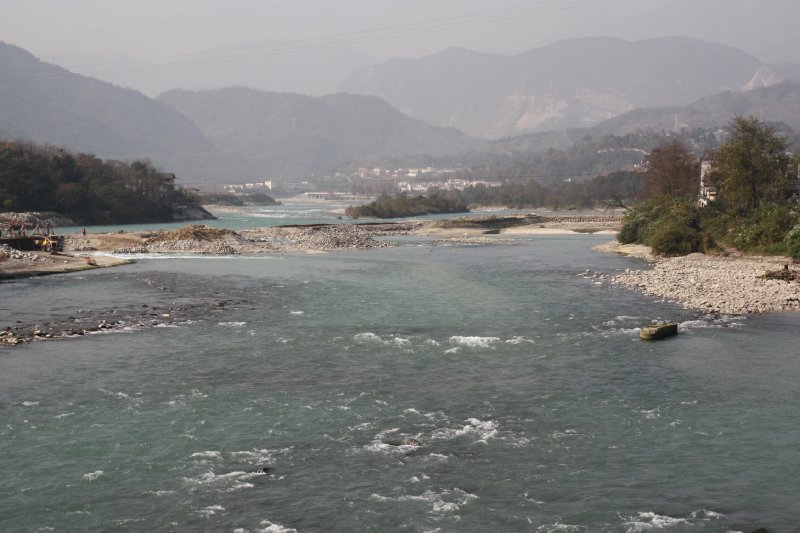 The first one, by the way, is what I found most interesting. What they created was a secondary channel for the water to flow down but if the level rose, it would be diverted off to the right - I had been confused by what appeared to be a dry river bed, and begun to think the trip was a dud.

The thing is, the Chinese have recognised the historical importance of this site, and made quite a production of it plus the town of Dujiangyan is yet another ancient city site, rather better than Luodai I thought, but I had no idea there was an ancient city here when I planned that excurstion. So the irrigation system has been put into quite a large park, with an impressive entry gate, tea-houses and the like: 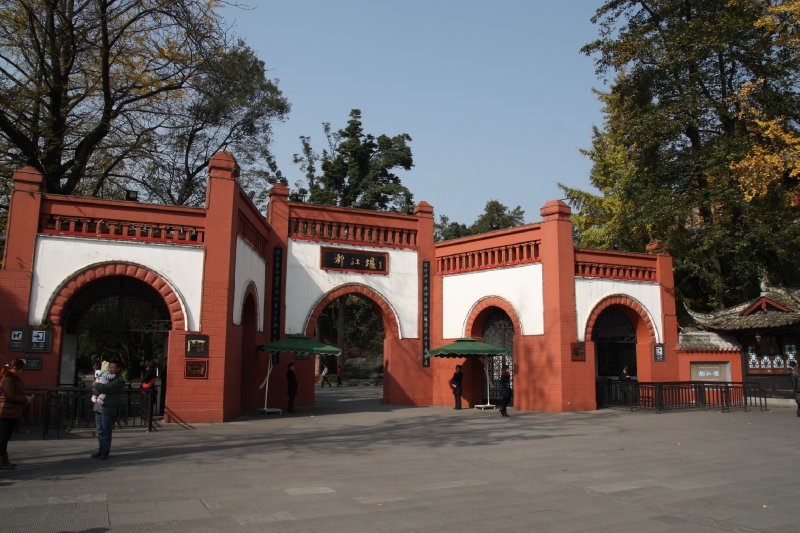 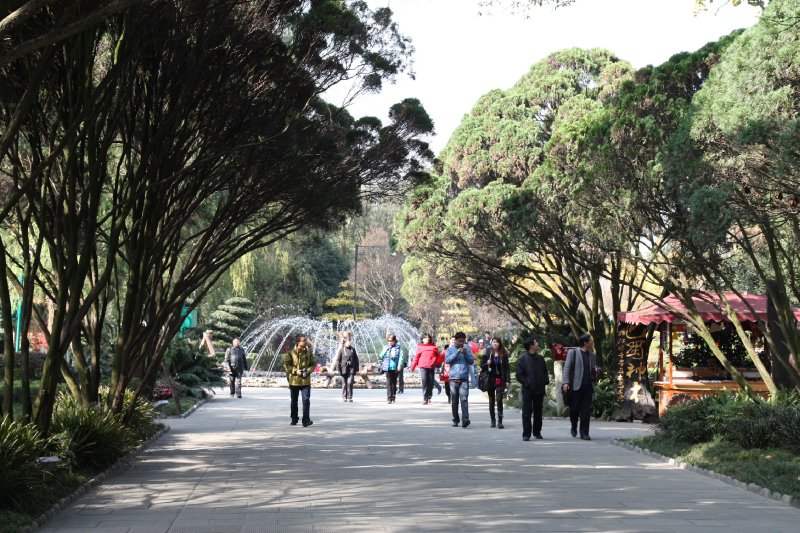 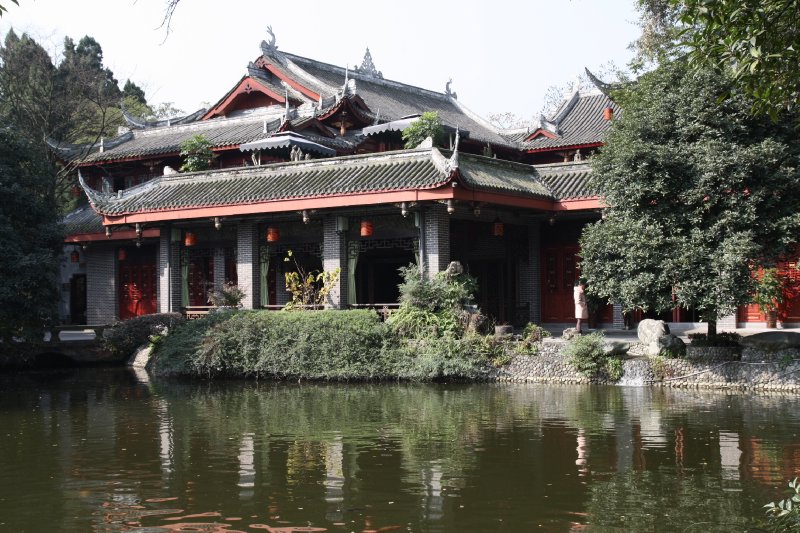 To get around the actual site involved the use of swing-bridges - I coped, but only just! 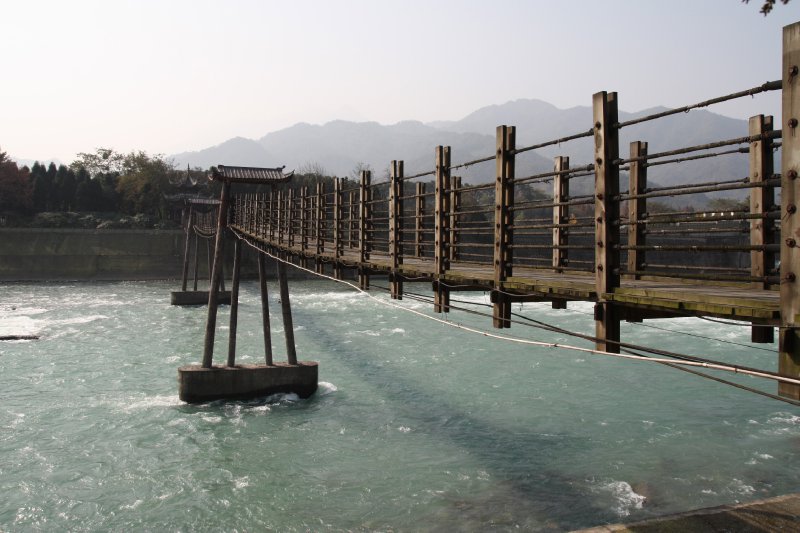 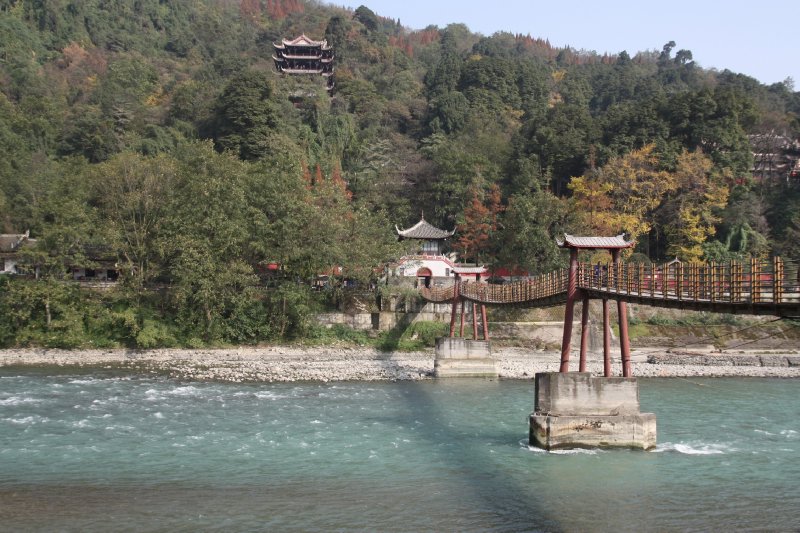 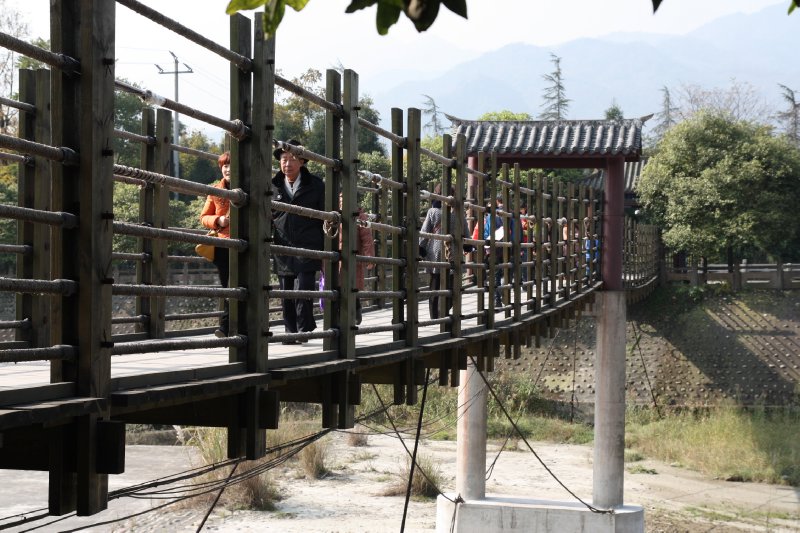 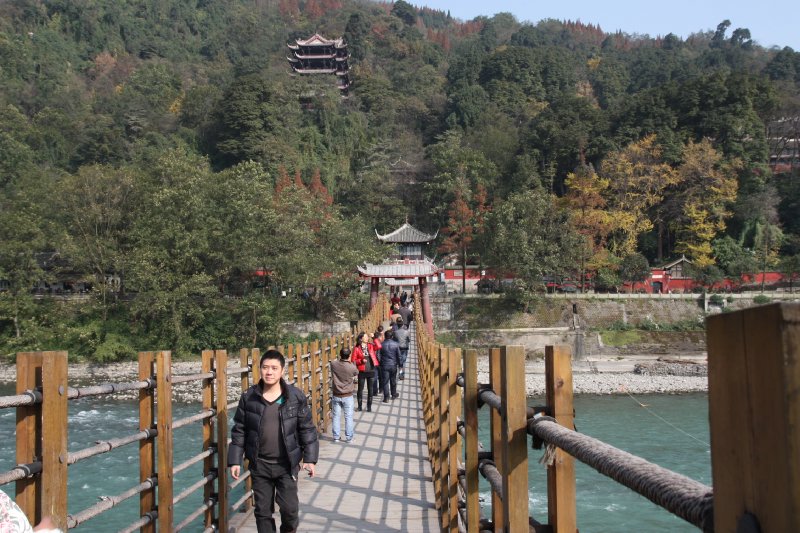 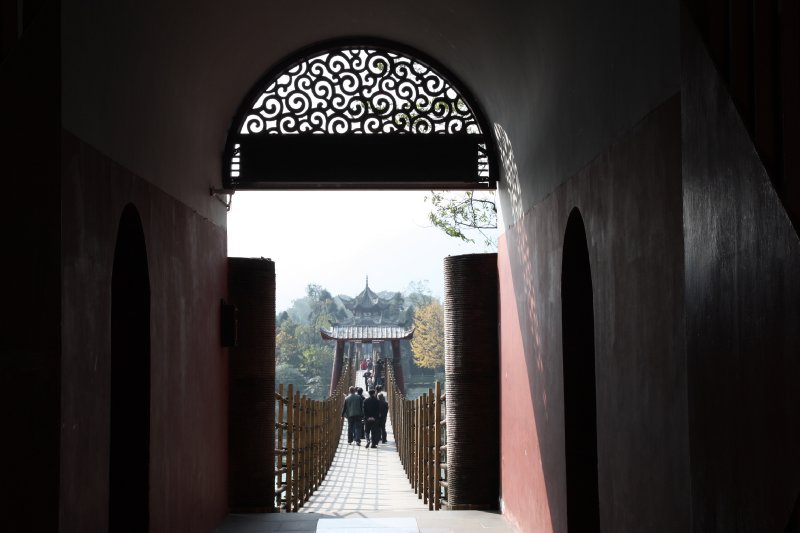 Here is an overview, taken from quite high up, of the overall work done, as well as a couple of other pictures I took as I wandered: 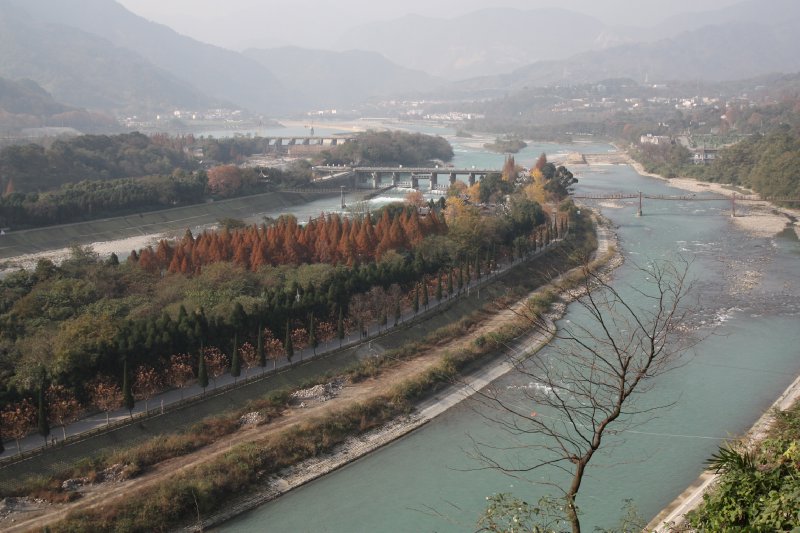 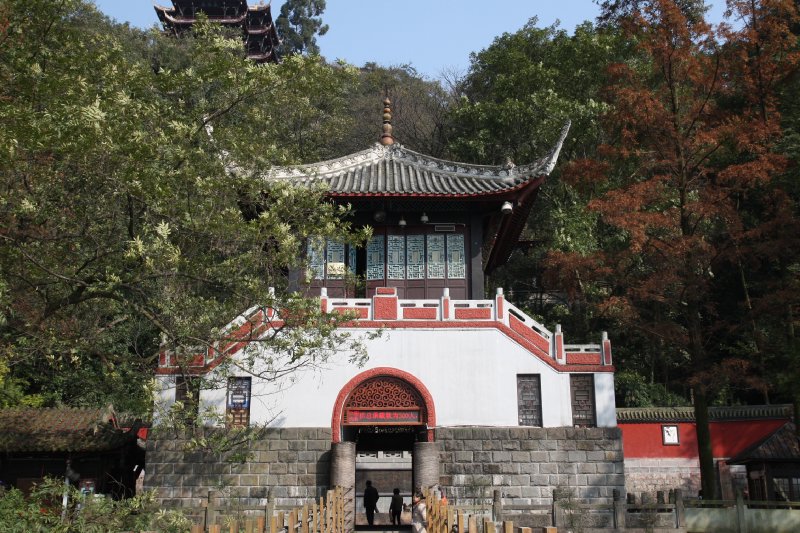 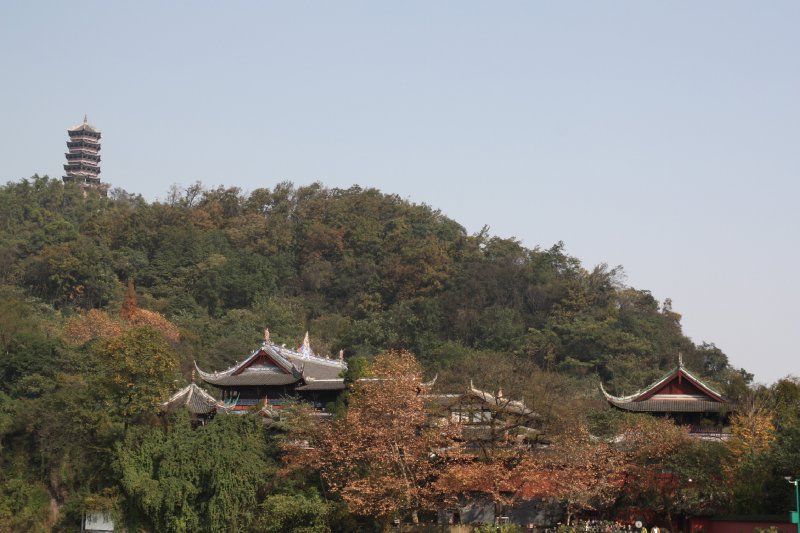 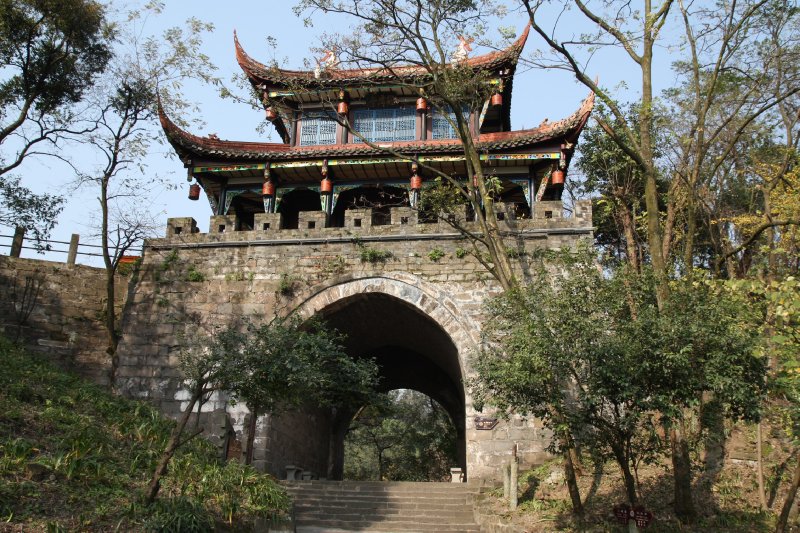 I thought that this was a statue when I first walked past, but not so much: 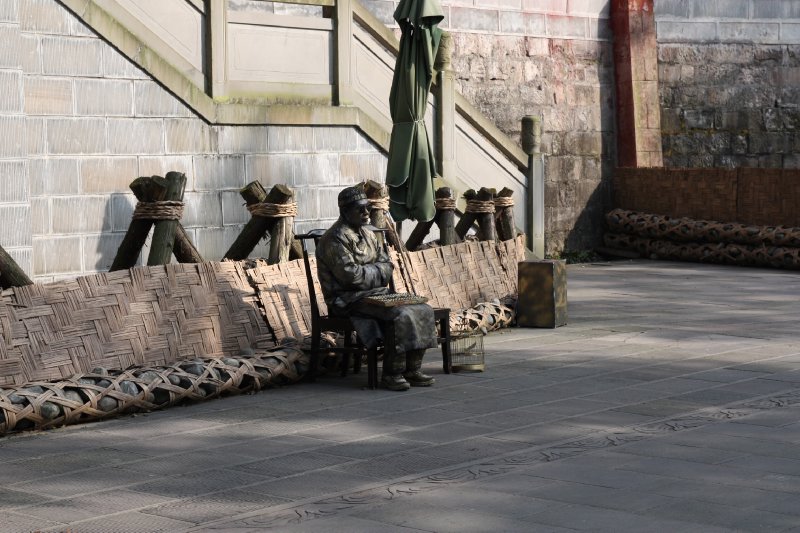 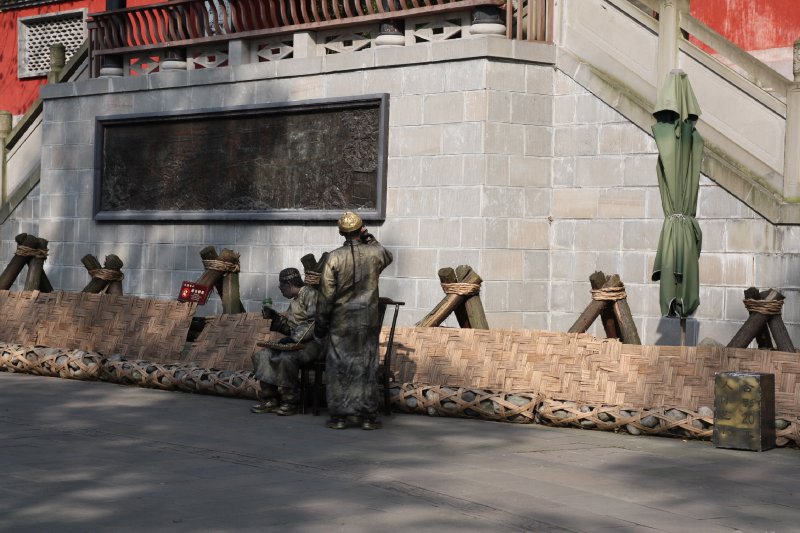 Coming out of the park and into the town itself, which was quite a bit more high class than Luodai and less obscure than the Wide and Narrow Lanes - most shops were selling high fashion, with all the food venues shunted to a side street: 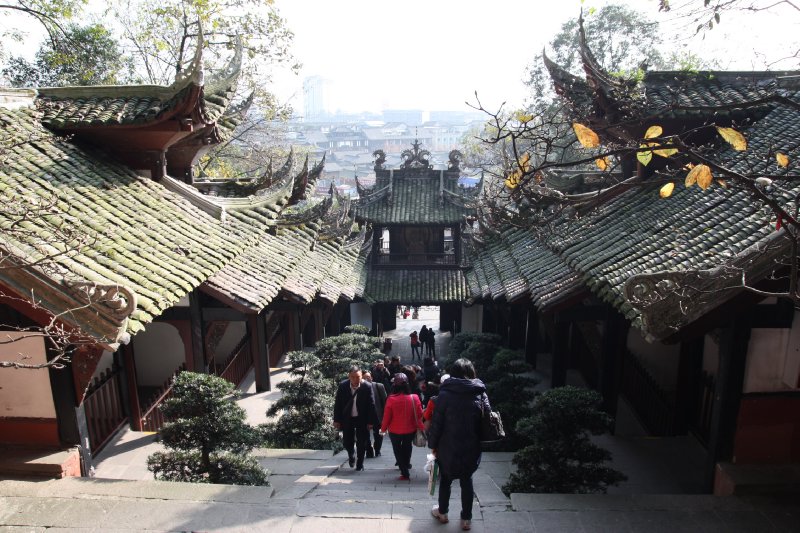 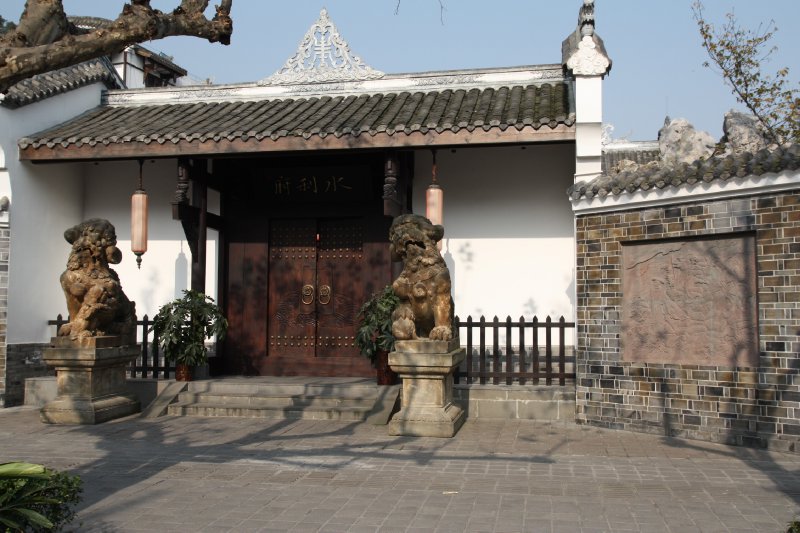 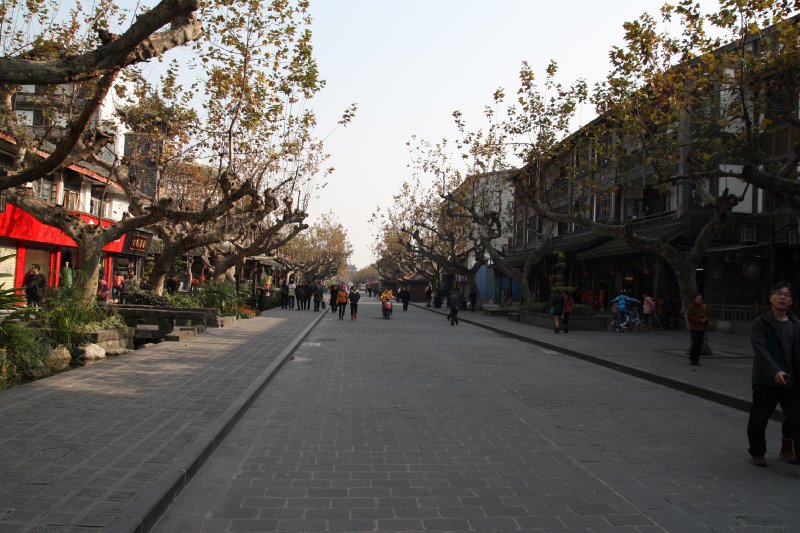 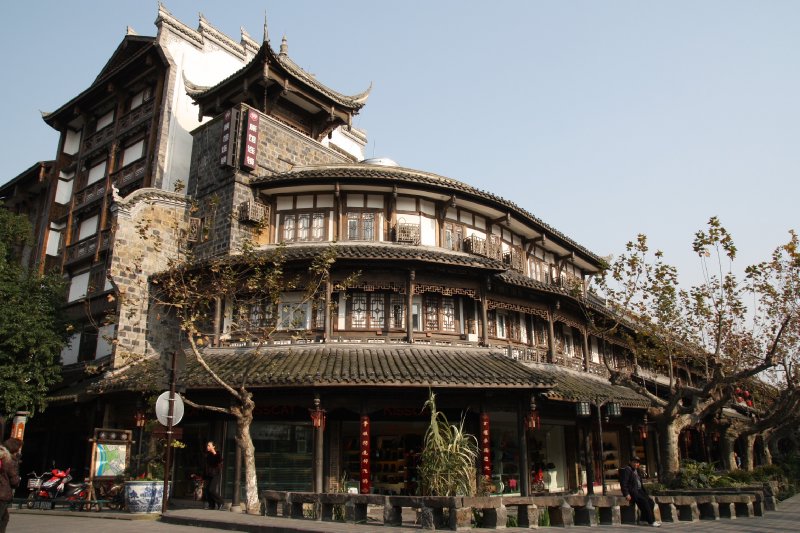 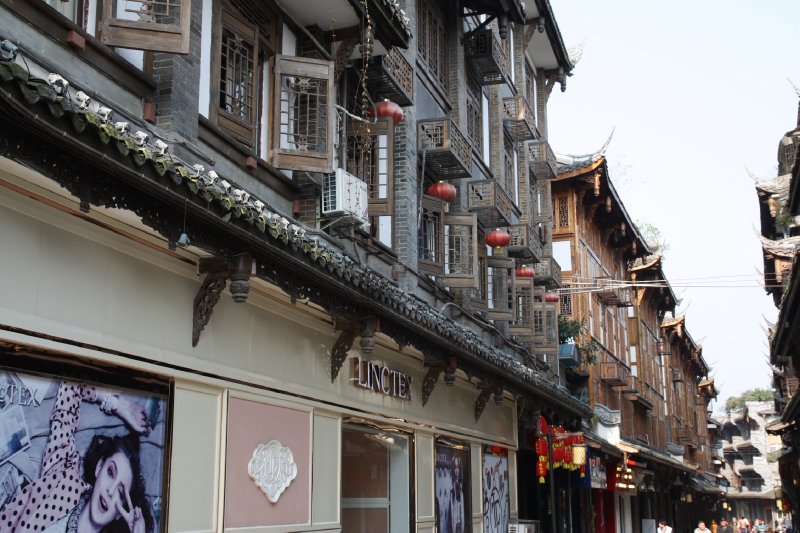 As I came into town, I was watching some performers get ready to go out on stage (I never did get to see them perform as I was distracted) 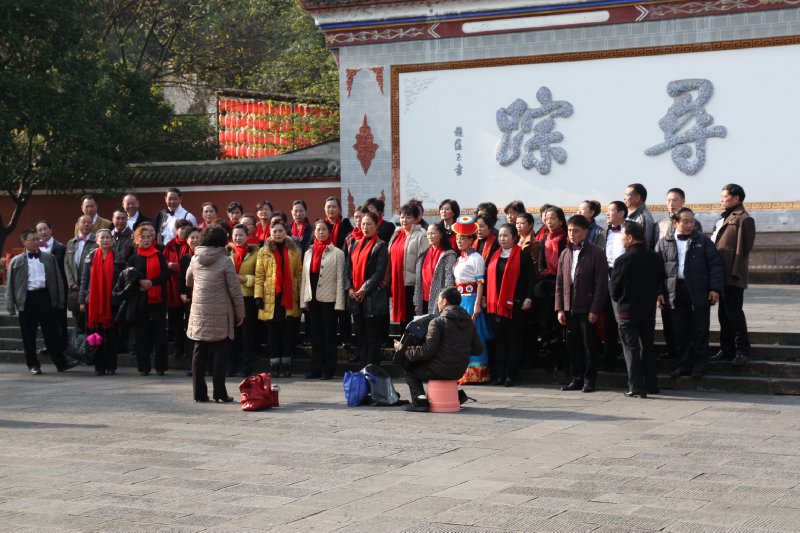 when I became very aware I was being photographed, yet again. These guys were more like paparazzi though - taking side on shots and using those big fat ended lenses that the professionals do (I suspect they weren't actually following me, just there for the performance and getting in some practice on me).

The river system comes past the town, and they have continued the historical theme with the footbridges 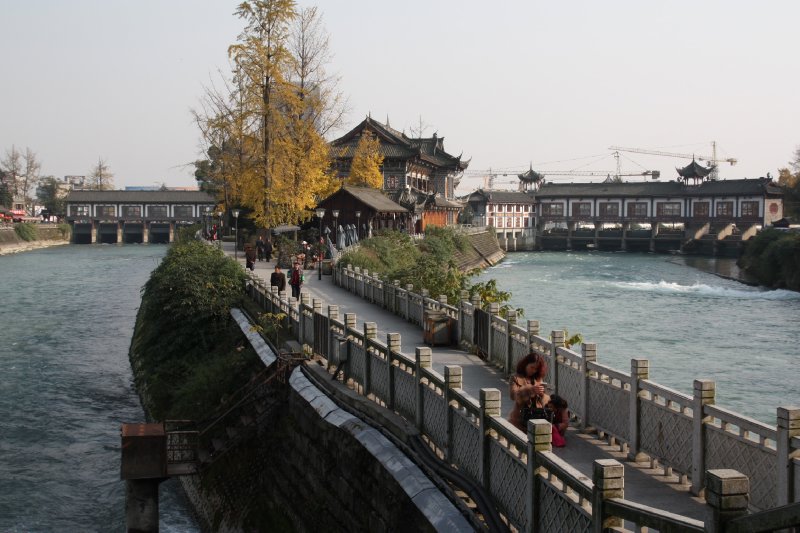 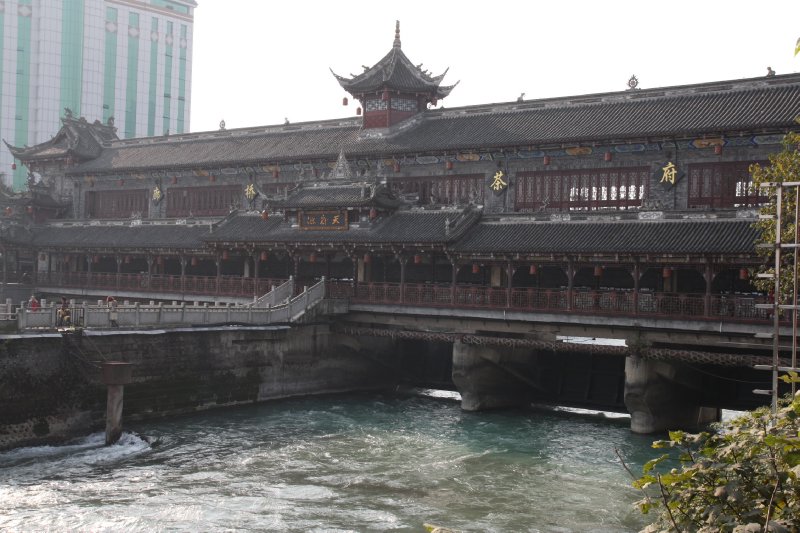 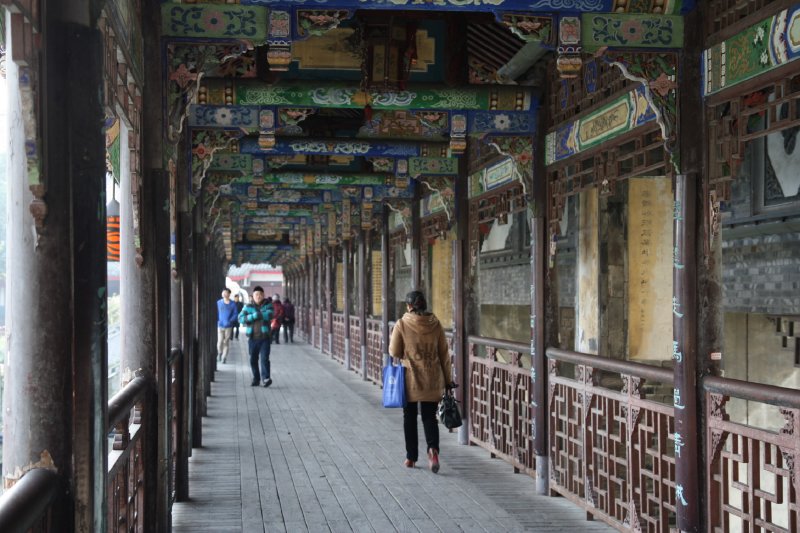 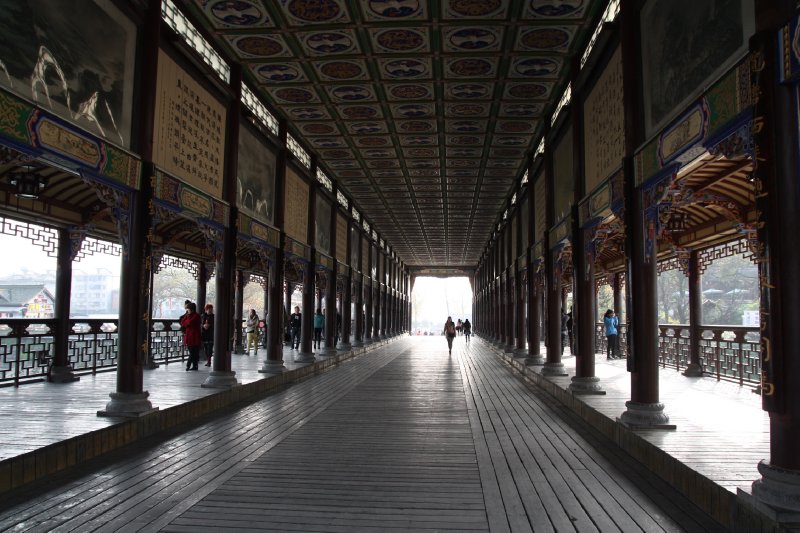 I spent quite a lot of time down here: as I had been wandering around, I could hear some very interesting music, and wanted to find out where it was coming from - it was these four, entertaining the nearby crowd of card players 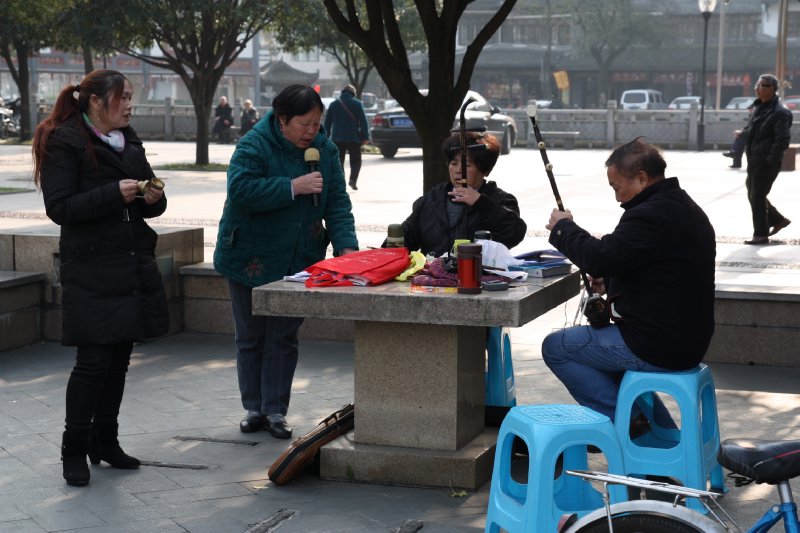 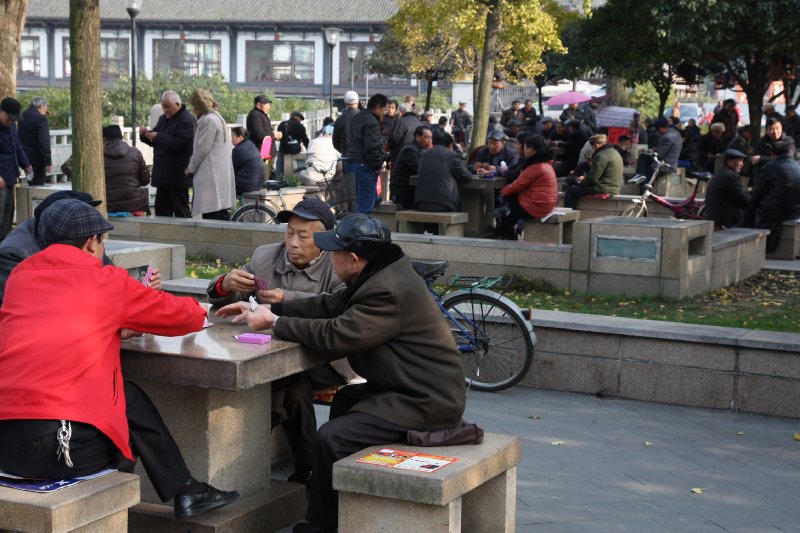 The combined effect of these players and the performers was obviosly not enough for the local Police. You know how it is when you catch someone napping and want a candid shot but don't want to get too close in case it wakes them up - that's how it was for me 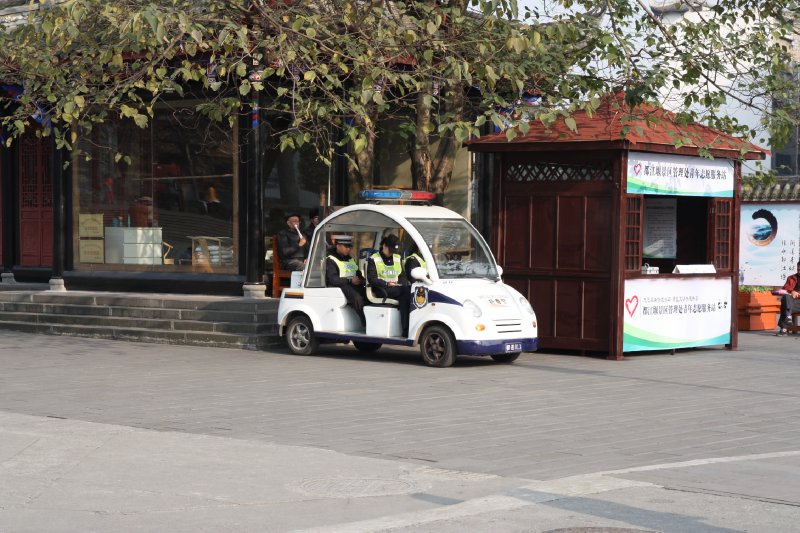 This is one of my favourite photos. Isn't their police car just ridiculous?

Posted by NZBarry 07:52 Archived in China