Reflections on my first 10 days in China

Growing up in rural New Zealand, I had very little notion of China, except that things “made in China” were "not very good". The only access to real live Chinese people was the greengrocer in Dargaville, where we would go and try to persuade him to sell us fireworks (it often worked). At school, we received some formal education about China, including its agricultural methods and that everyone in China rides bicycles. Even then that was probably not true, but it certainly is not now – I have been impressed by the huge numbers of high end cars on the road (far more as a proportion of total vehicles than back home) and the huge efforts made to modernize the rail system: most stations I have been in are new, one to the point it had not even finished installing all its retail outlets. I think Chengdu Station might be the oldest I have been in, and it is about a decade old. 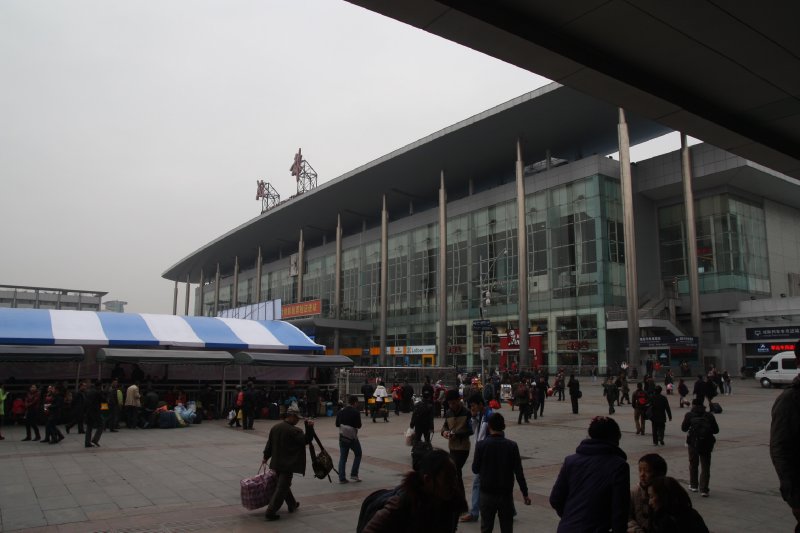 New high speed tracks are the norm, with the local version of the bullet train (they travel at up to 200 km/h) not uncommon, although I have been on a couple of older trains. 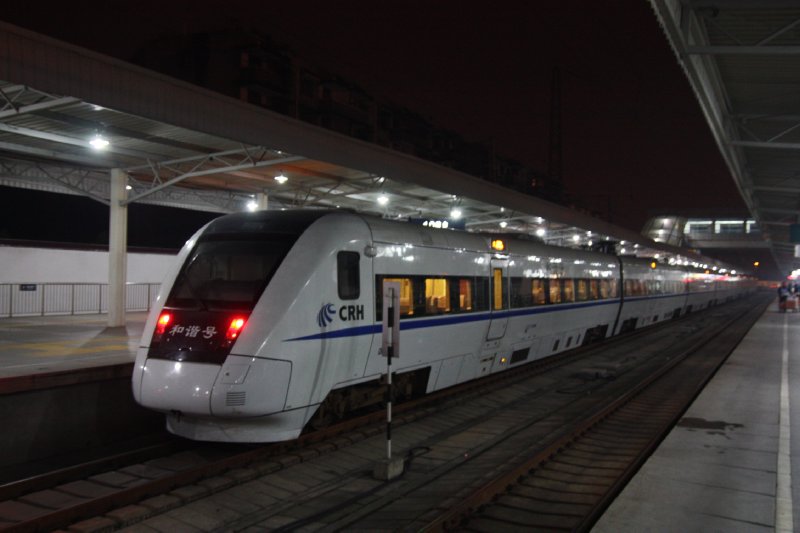 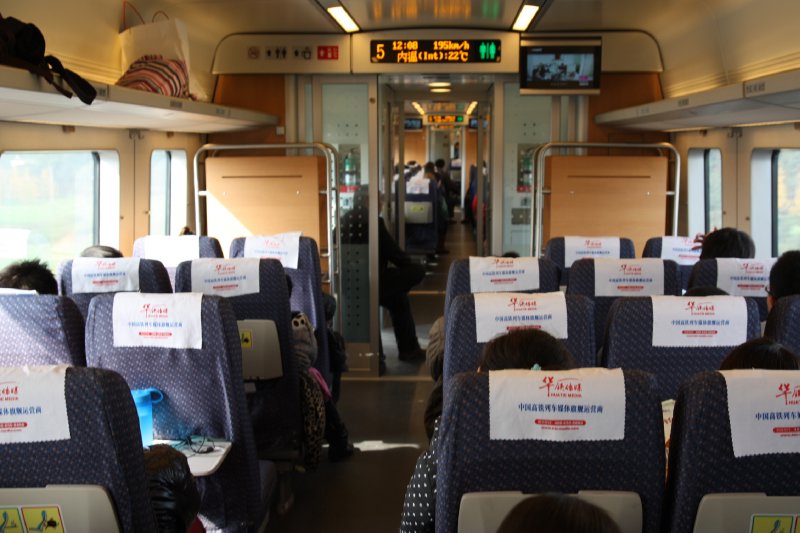 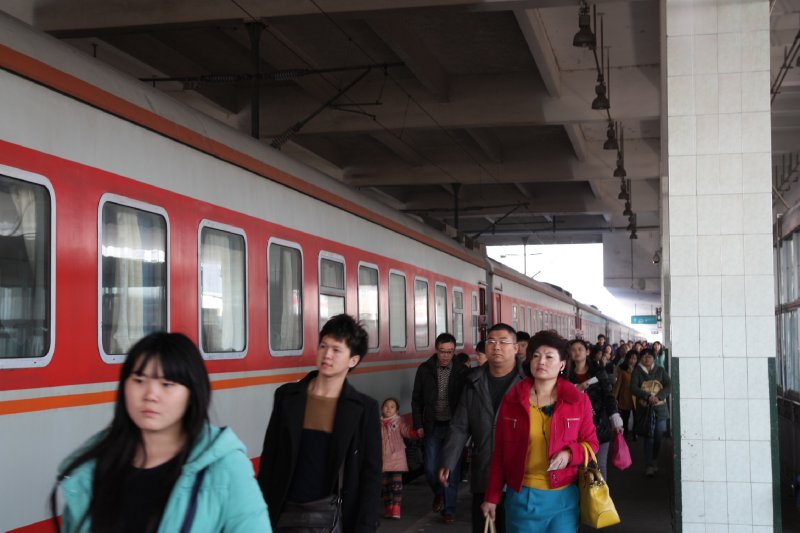 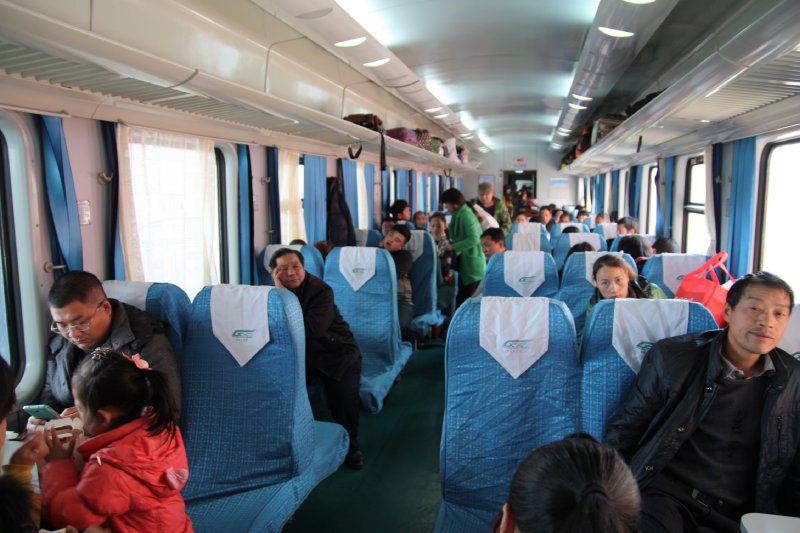 Those last ones are hard seats, and they really are quite hard - there is a bit of foam padding, but it did not take long for the seats to get quite uncomfortable, to the point I found it easier to stand up in the vestibule (where all the smokers gather).

Two other “facts” from my education about China are that they are so honest that all those bicycles they ride are never locked up and that Mao Tse Tung was a good man and his cultural revolution was great for China. I could not help but be amused every time I walked past Tianfu Square in Chengdu, where they have the biggest statue of Chairman Mao in China (which I guess means the world). Chengdu is one of China’s economic powerhouses, and Tianfu Square is right in the middle of its main consumer shopping areas: he would neither recognise nor accept the world his statue presides over. 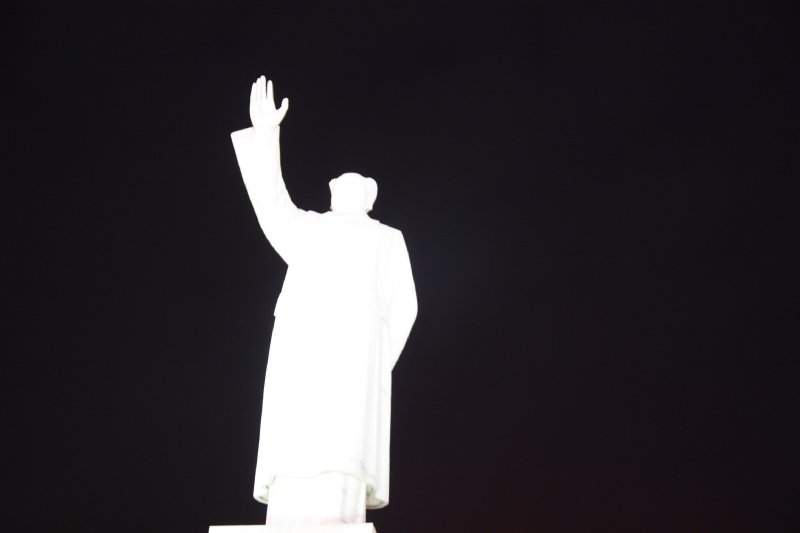 I did mean to get back and take a daytime photo but somehow it never happened.

A few other impressions have been gained about China since I went to school – I came here with a nightmarish vision of pushy people who were constantly spitting and smoking: this first idea came from a recent flight I made on China Southern Air, where my fellow passengers were so keen to get their bags from the conveyor belt I damn near ended up on it.

So I am very glad I spent nearly a week in Chengdu in order to find my feet and form a slightly more accurate idea of what it is like to be in China. The two things that have really stood out are the helpfulness of many I have encountered and the readiness of people to laugh. A fellow I met on a train who is studying at the Three Gorges University told me that it is a cultural obligation to help others, and I have heard that idea expressed most frequently in the disembodied electronic voices of metro stations. This has shown up in a number of small graces - people pointing out that I am about to put too much money into the bus ticket machine, or that I am about to trip over something, or that my shoe laces are undone. It has also shown up when it comes to shopping - so often I am dealing with people with no English, and I'll have written down a poor Chinese version of what I want, but with a bit of goodwill and patience on both sides, we get there. I found I had left my headphones behind, and in a shop in Yichang, I finally saw a pair I liked - I had about four guys clustered around to make sure I was happy: one even came with me to an ATM to show me where it was and then when thedeal was finally done, they insisted that I tried them out (and laughed like hell when I jumped at the very loud Lady Gaga being played). I have had the same sort of experience when dealing with hotel reception and train ticket sellers (so different from, say, Bulgaria where I had a problem communicating and the ticket seller's solution was to close her window and go to lunch). Just tonight, it was a slow night at the Chongqing Railway station - I had three women all working hard at discovering what I wanted and doing their best to supply it - the lady actually serving me was quite disappointed that when she worked it all out, the train I wanted did not run on the day I wanted it.

I only saw a handful of Westerners in Chengdu: since leaving I have seen a total of two. Very few people speak English, although many businesses use English in their signs. I find this a bit weird, particularly an internet cafe which had a big sign saying Internet, yet the fellow running the place had no idea what I wanted when I asked "Internet"? But still, many people will call out hello to me as I wander around: this often exhausts their English ability. It also seems to attract a certain amount of teasing from their friends and workmates, leading to entire groups of youngish women doubled up in laughter. One poor girl, who actually managed a bit of conversation provoked such a stream of teasing from her workmates that when I returned, she actually hid! But there have been some I have had some pretty good chats with - the young fellow on the train I mentioned, an older farmer I ran into who was on his way to a national agricultural exhibition in Wuhan, the occasional guide. Luckily, I can survive on just the occasional conversational scrap.

I need to mention the weather: it has been spectacular, southern China is a much under-rated destination. I find the day time temperatures to be exactly right, a pleasant warmth without it being too hot to move about, then crisp cold evenings.

Food is quite important to me, but while I do try new things, I at least need to know exactly what it is before I'll eat it. Here the Chinese version of the coffee shop has been very important to me, as they are not at all like coffee shops back home (they're a bit like the ones I encountered in Argentina, but the standard of interior design tends to be superior. It was very dark in this one so the photo is a bit blurry, but the idea is conveyed 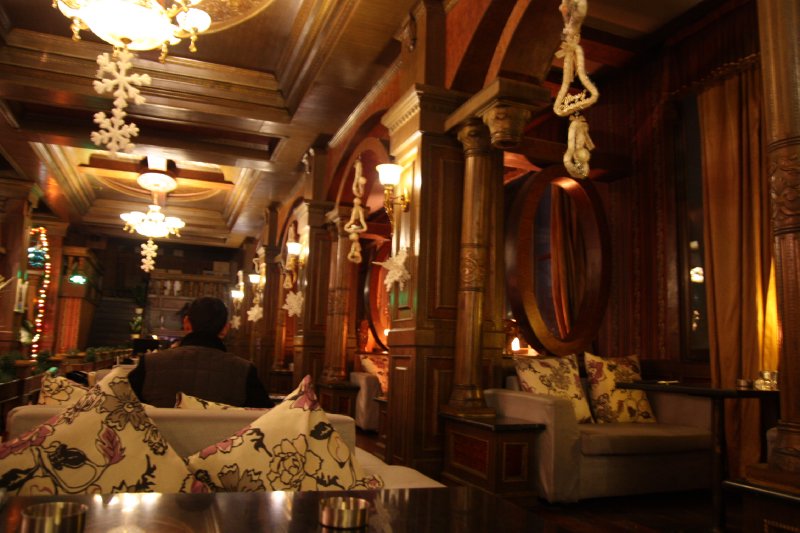 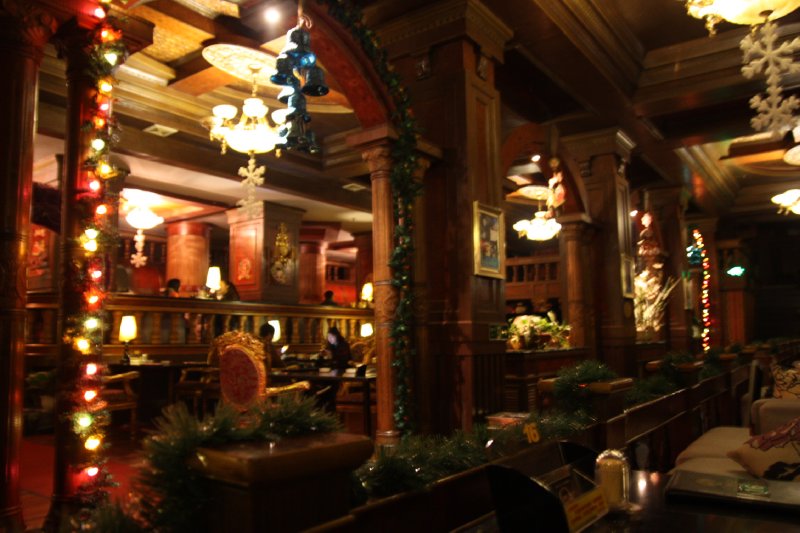 While they have Western menu items, they tend to also have a large range of local dishes as well, with English menus and pictures: I have been very good about eating local food, and had some great food. In the coffee shop where I took the photos, I had a claypot rice dish - the crunchy rice went beautifully with the delicately cumin flavoured beef, the bok choy and the capsicums. I haven't really done very much with street food, because of not knowing what it is (or I have known exactly what it is and made an executive decision not to eat it), but there have been a few things which have been so obvious, I've gone there 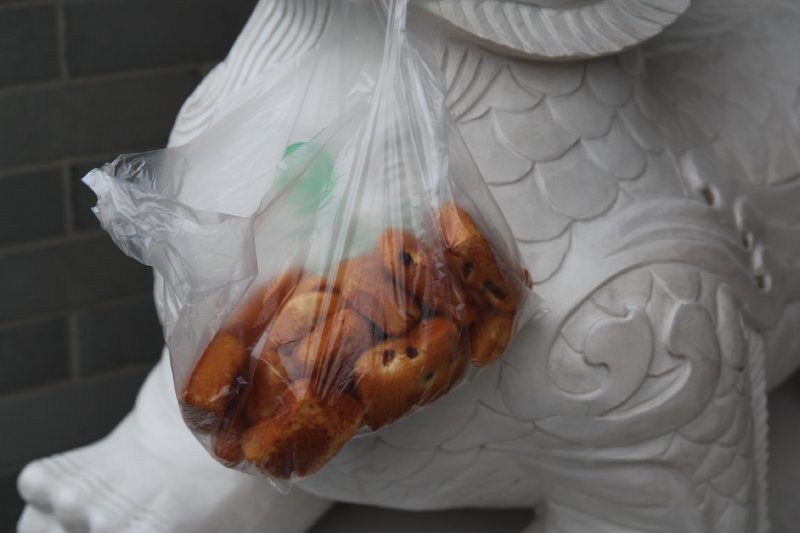 These were little gem cakes, with sultanas, which were crisped by contact with the gem tray and still warm from the oven. This little bag coast me a whole dollar! It may not be the only time I have had a meal of cake in China. The next dish is pretty obviously going to be delicious - fried spiced potatoes. 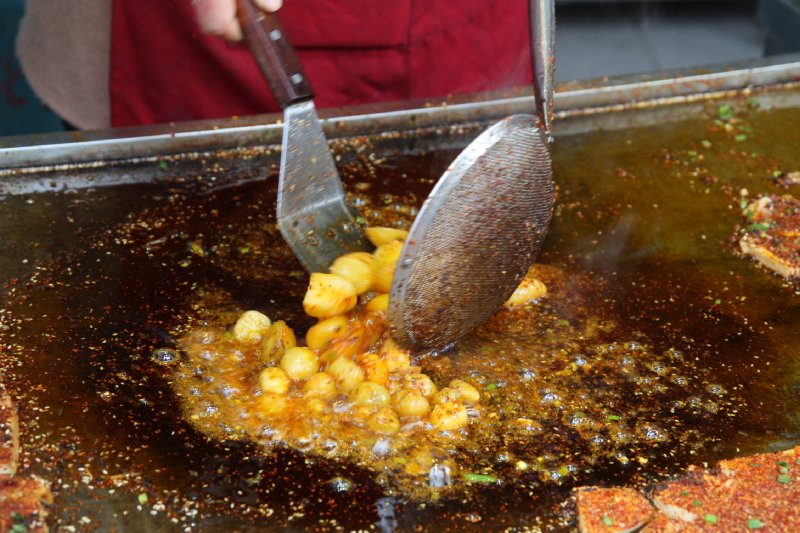 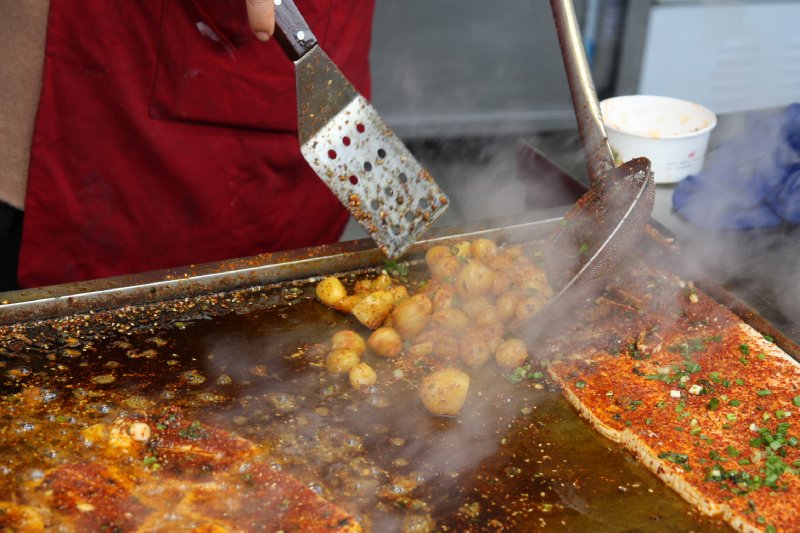 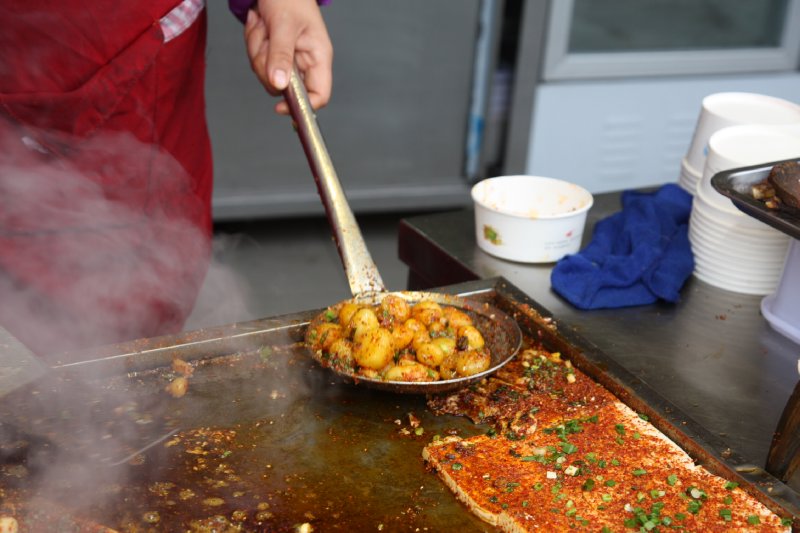 Then there the good old noodles I had in Xiangyang 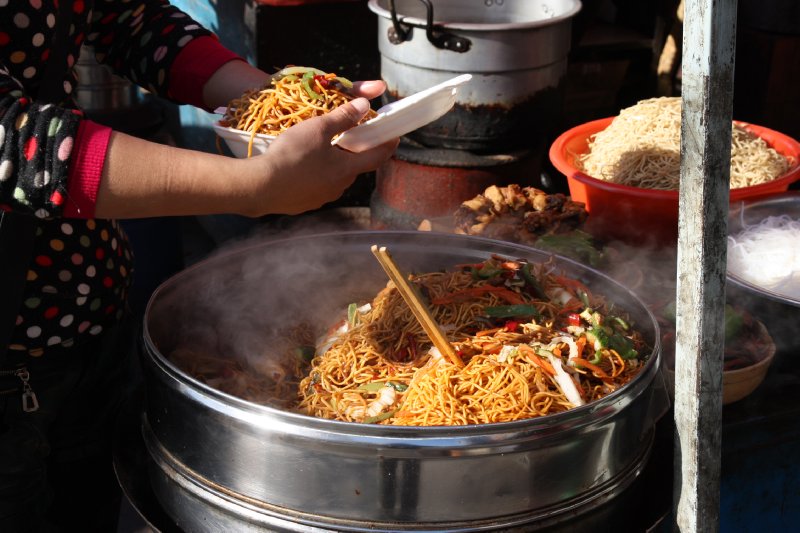 As I have wandered around, I have gathered up a few odd signs. In one department store, I could kind of understand what a women's fashion museum was but the sign saying "girls loaded" left me completely in the dark. This bus trips looks far from whelming: 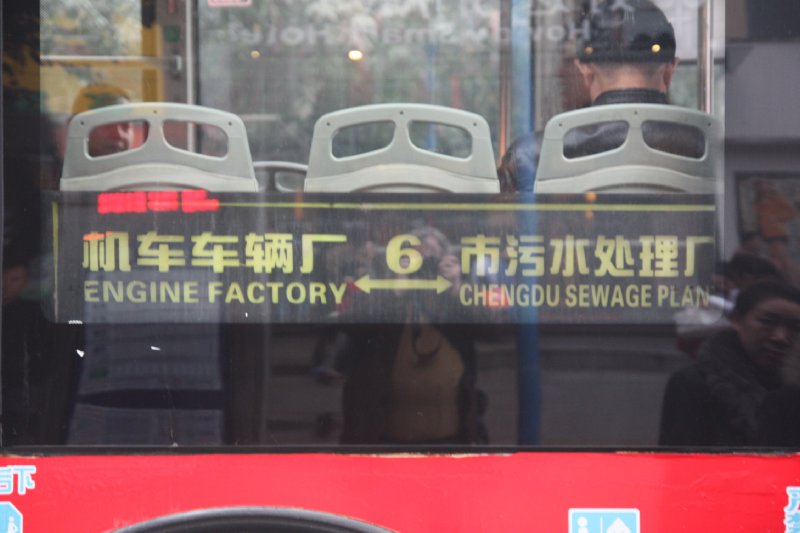 Even the Panda Base produced a slightly disturbing sign 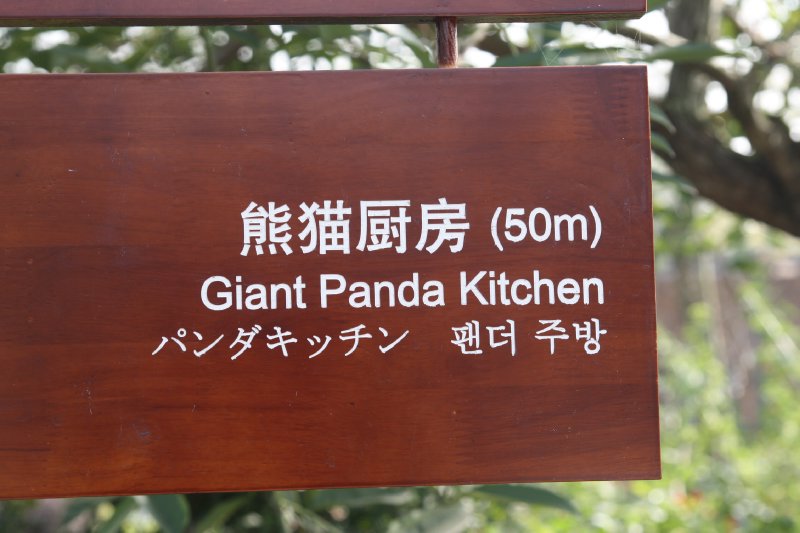 But no, they do not cook pandas here, this is where they make them cakes! Yep, it is how they produce a balanced diet, by putting the nutrients required (those which do not come from the bamboo) into cakes. I don't feel so bad that a certain proportion of my diet has taken the form of cake now. 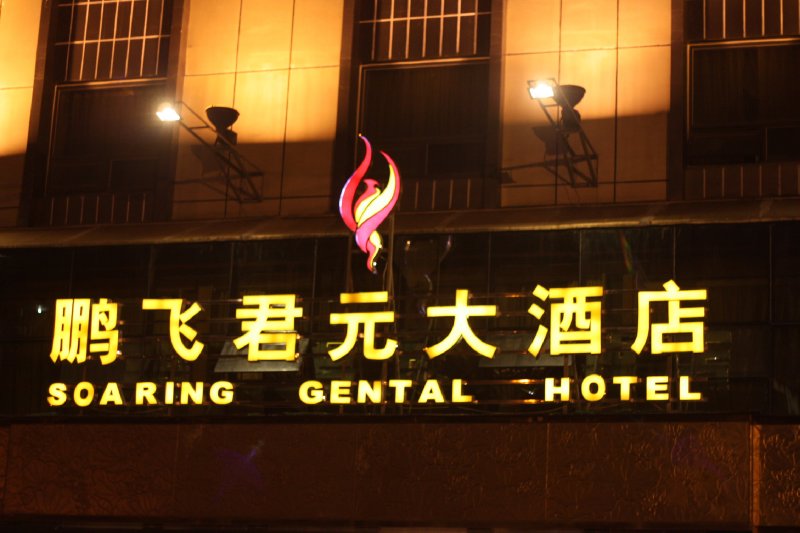 Posted by NZBarry 06:07 Archived in China