Yichang is a river city, the river in question being the Yangtze, the largest river in Asia. It is west and down-river of the Three Gorges Dam project, so the river flows through at something like its pre-dam depth - which is just as well for Yichang, because the dam is over 100 metres high. I was lucky enough to pick a hotel just a couple of blocks from the river and, even though it was well after dark before I arrived, I went for a wander down to check it out. In all, I was there three days - the last was just a hanging around sort of day, making use of my hotel as late as possible, then going shopping for some provisions I would be needing over the next few days. My ability to lose things continued unabated - this time round, it was a hotel, but it wasn't really my fault. I'd poshed it up a bit and stayed in the Ramada for my first two nights, but for a bunch of reasons that don't really matter, decided to change hotels for my third night. I didn't really pay much attention to the address, but noted that it was at some distance from the railway station, so thought I'd be in quite a different part of town. So, I was more than a little confused to see that the address of this new hotel was exactly the same as that of the Ramada, 27 Yiling Lu. I did numerous searches on different websites to get a better address, found various locations marked on different maps but the address remained stubbornly resistant to change. So, I walked the length of Yiling Road, from the railway station to the river. TWICE. Still no hotel. But then as I was coming back, feeling a little frustrated, I happened to look down the street I had to cross just before my hotel - and there, half a block away, was the name of my new hotel. Technically they may have been correct, because when I examined the buildings, it turned out to be a single complex involving two hotels, with a pub and entertainment venue in between.

I got distracted - there was a point to saying that the river's depth was at about its original pre-dam level, because Yichang is just before the river goes into the first of three three gorges, and so the gorge wall retained its same relative height. I had heard there was some sort of touristy village set up on the edge of the gorge, and thought it might be worth checking out. I hopped on the bus that was going to take me there, but what I realised that in this humble 1 yuan (20 cent) suburban bus trips, I was on one of the most spectacular bus trips in the world, because the bus was heading towards the gorge. I decided to hang on and see where the ride took me - we followed the river a bit, then started to climb, right to the very top of the gorge at that point, then we had to backtrack, down a road along which hundreds of stone carvings the size of cars had been scattered (they had been quarried here, and these were set up as an outdoor artwork), through a couple of villages of people re-settled from flooding the river). The road was sort of level for a while, and then made the plunge, right down to the river in a number of very tight curves. This is where the bus stopped its journey, and the first thing I saw was a ferry out on the river. 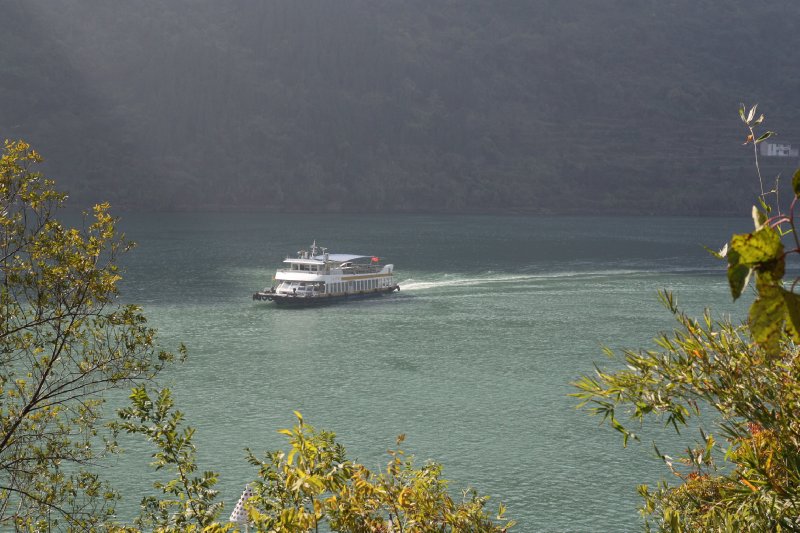 By the time it had pulled up below my feet 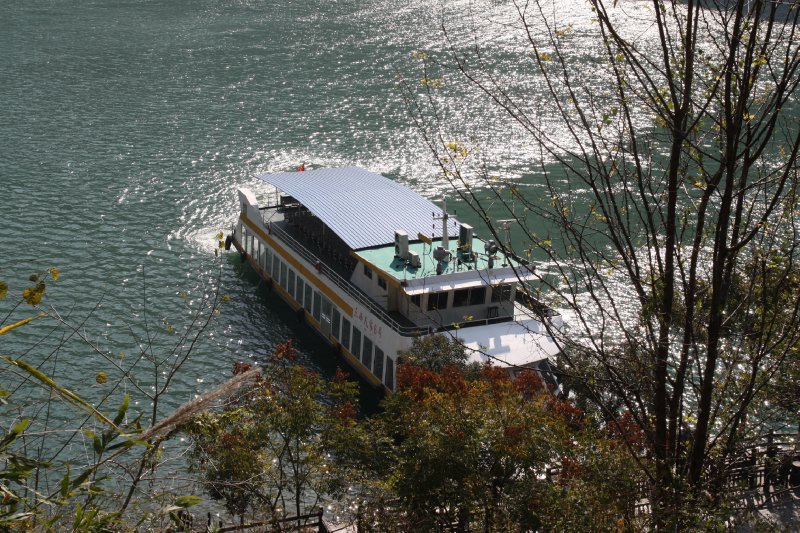 I decided I had to be on it. This is where the day got a bit strange: there was a big building, with those metal yard things they use for crowd control, so this was obviously the ferry building. There was an information counter, so naturally I asked for a ticket: she had no idea what I meant, and summoned over two of the ticket takers to assist. They got a very approximate idea of what I was up to, helped a bit by google translate on their phones, then one phoned an English speaker for me to talk to: she had me baffled when she wanted to know where I was leaving from, as I had no idea where I was. Finally, we got another English speaker on the phone, a very crisp fellow, who quoted 180 yuan "but no cable car". That was a bit confusing, but I'd seen a map and thought quite a distance was involved, so didn't mind paying $35. There were a few other people on the ferry with me, all wearing "VIP Tour" cards on lanyards, then we set off, only to stop on the other side of the river. But no, there was more to this boat trip - a good ten minutes up river. 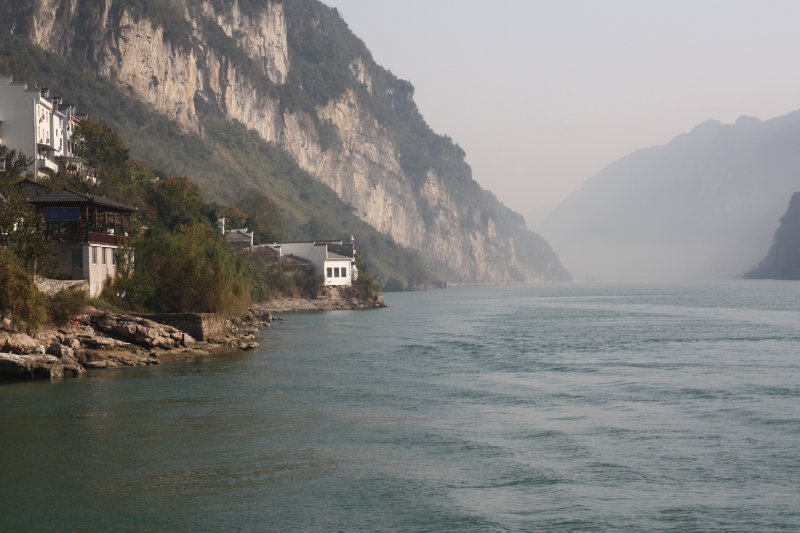 Poor value for my $35, I thought, and then I found out that what I had paid for was entry to the Three-Gorges Tribe scenic spot, where there are quite a few historically important buildings and monuments scattered about (with a non-operating cable car to access the highest ones): 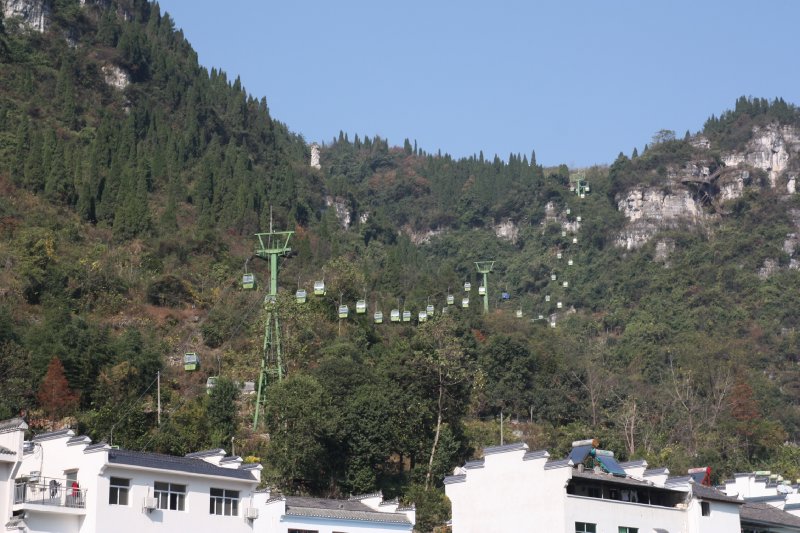 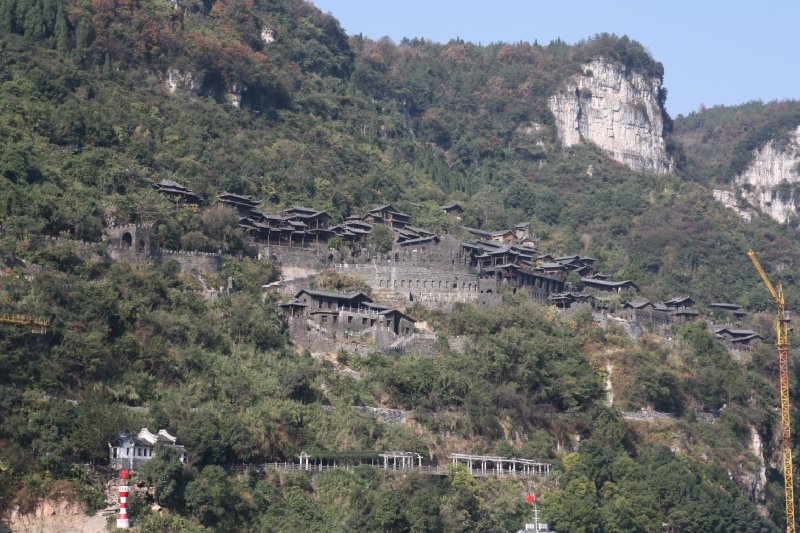 I could have climbed up and inspected everything, but I ended up being entirely satisfied by what I saw. It started with these 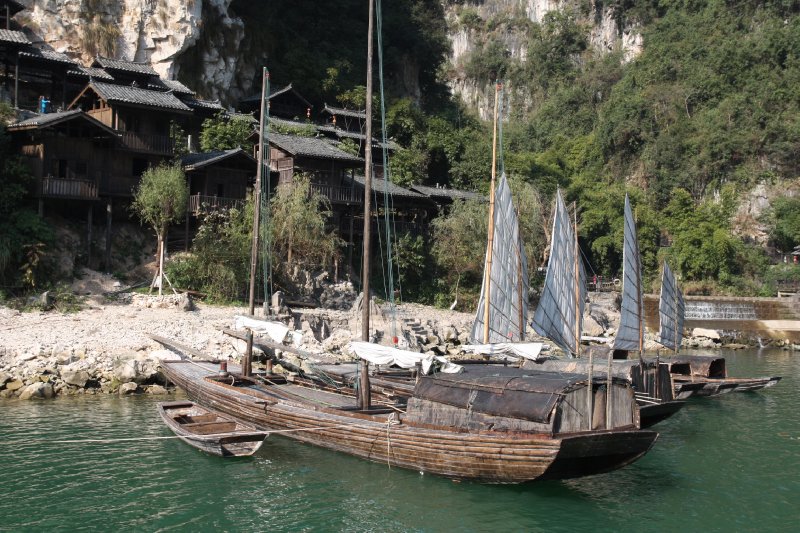 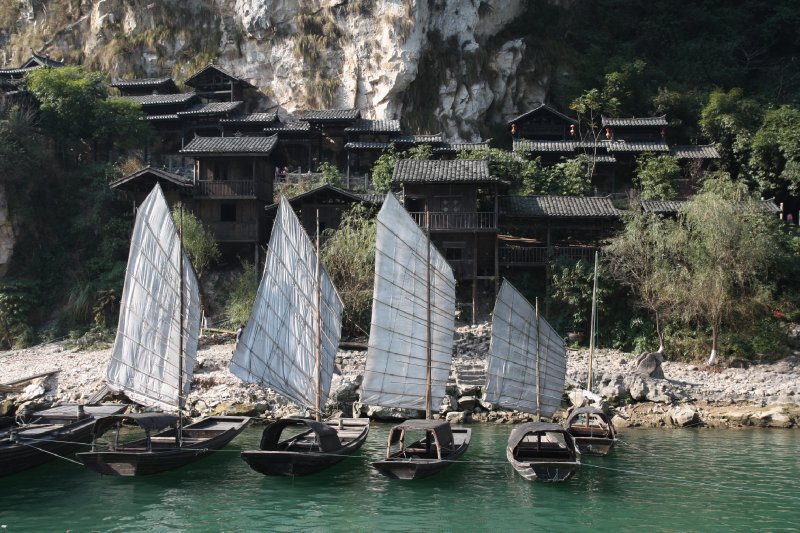 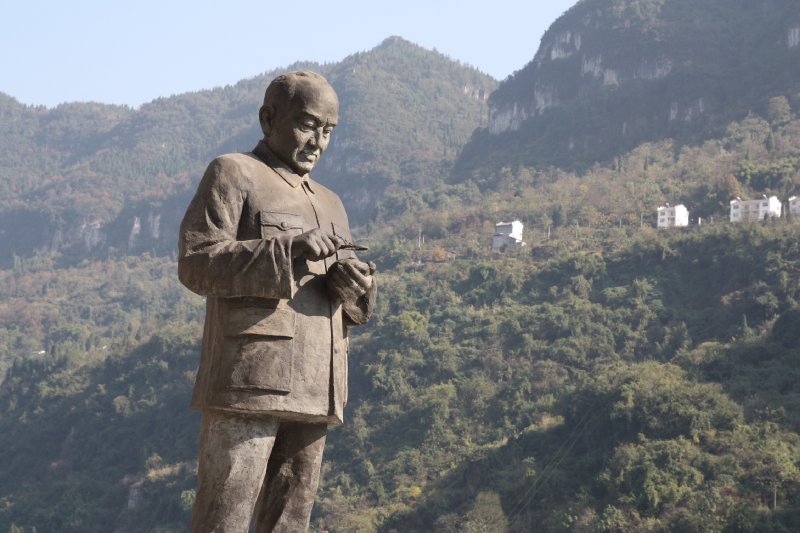 Then I followed this 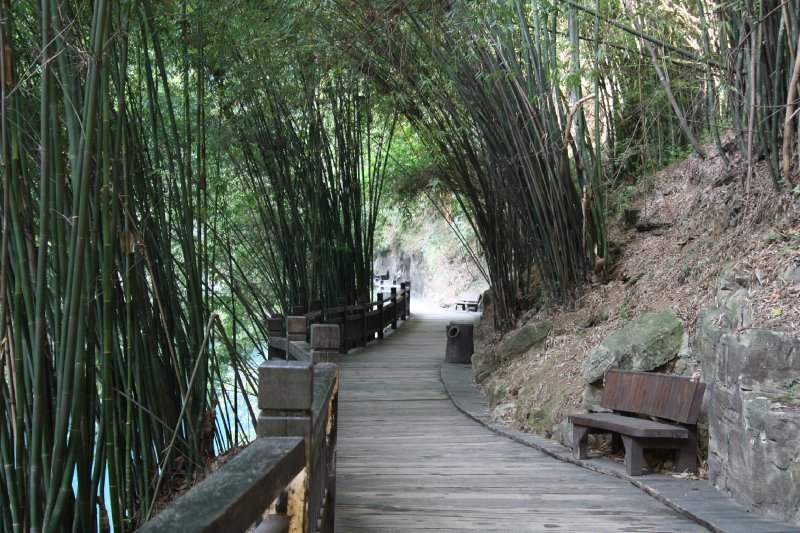 up one side of a brook and back down the other. This is what I saw: 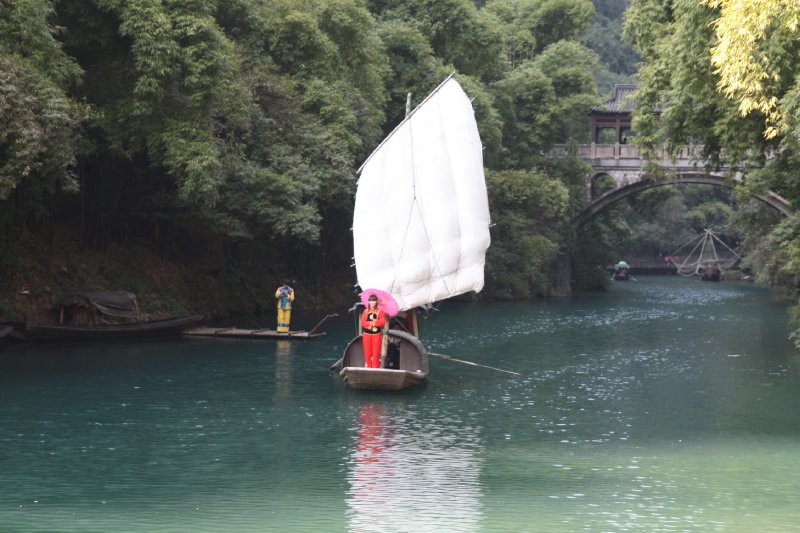 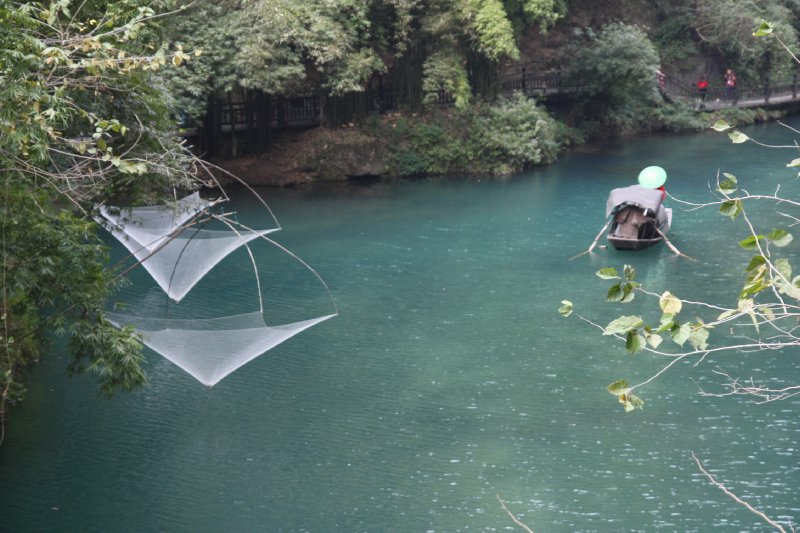 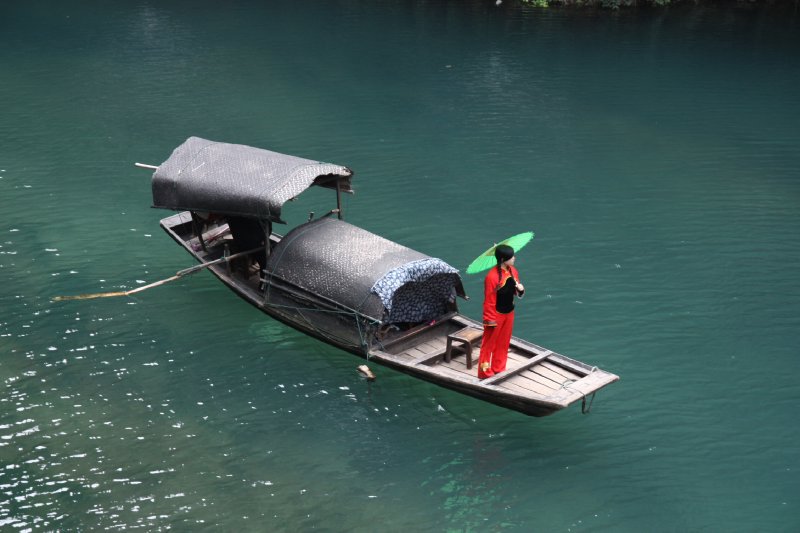 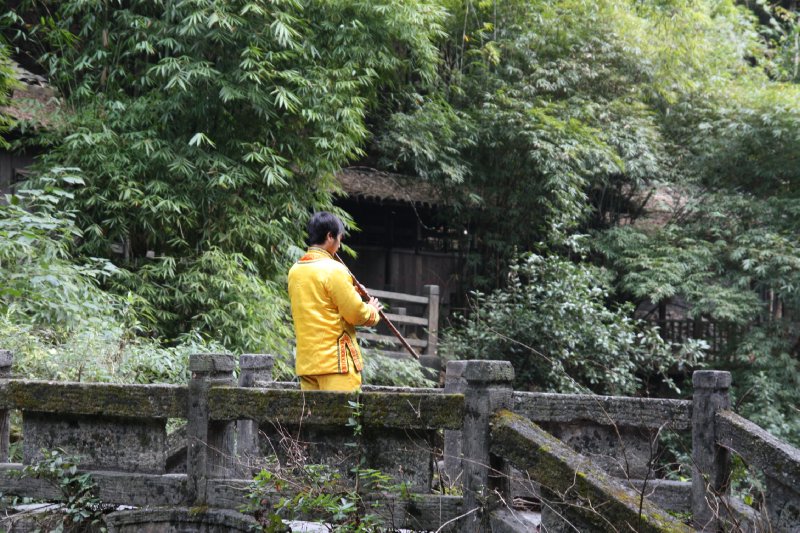 Essentially, what was going on was a representation of ancient love stories or poems. There is a wedding house and then, in an entirely different building, a wedding scene was being enacted (in the second, the girls have come out of character a little). 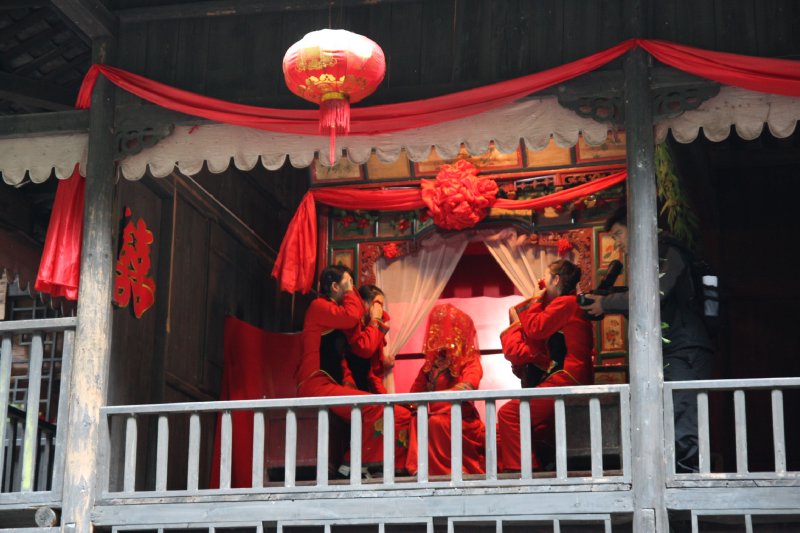 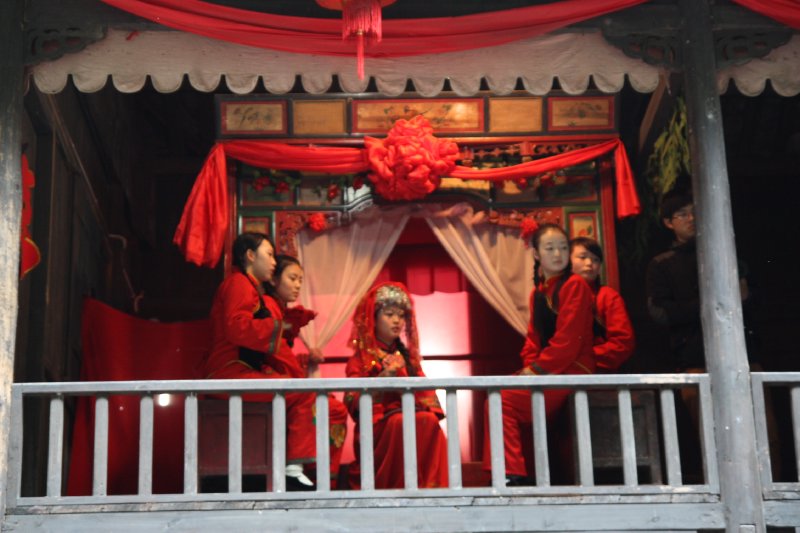 This is the locally famous "crying wedding". There was a film crew shooting this, and quite a crowd assembled to watch. The fellow sitting beside me was fluent in English, but not from this part of China, so could not really explain it to me. Subsequent googling has revealed

Crying singing on wedding is another unique folk custom of Tujia people to show brides’ sorrow at leaving their own parents and family. In old times, a girl had to learn to sing the crying songs from 12 years old. It was seen as a skill and a girl who could sing a touching crying song was considered to be a good bride.

Here are some more shots I took as I walked back: 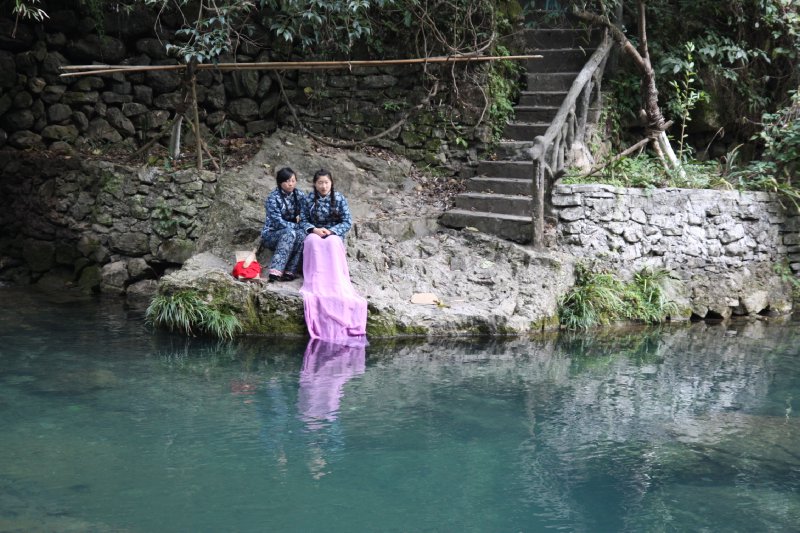 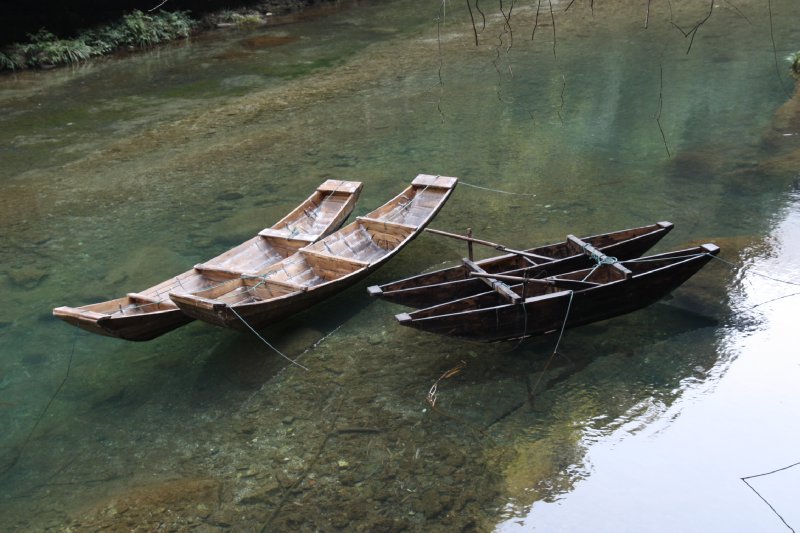 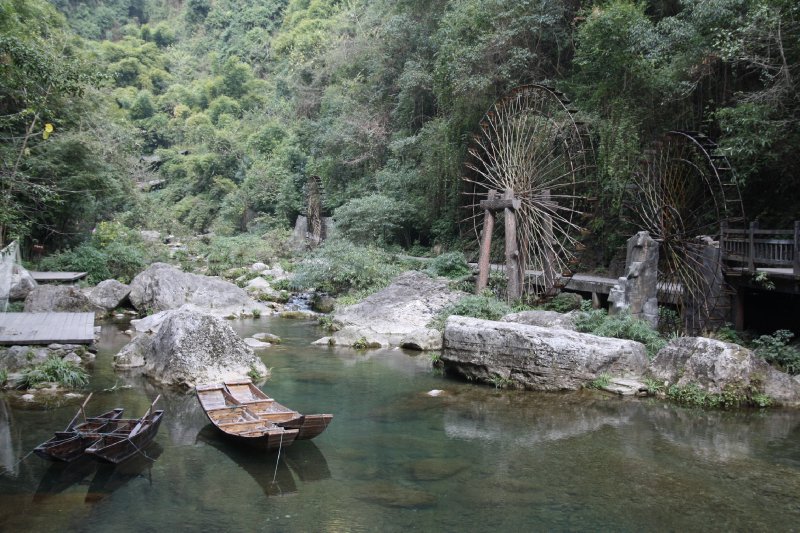 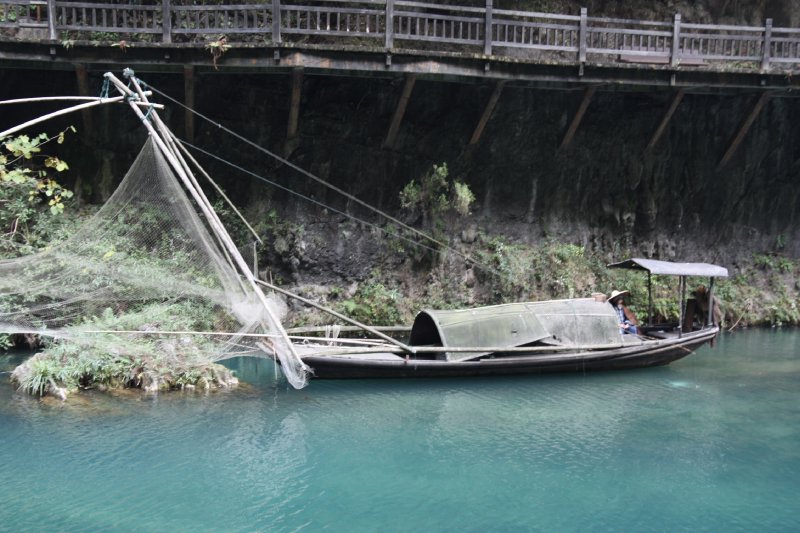 Back at the river, I just sat and watched for a while. Apart from my "ferry" and another, much smaller actual ferry, this was the dominant form of river traffic 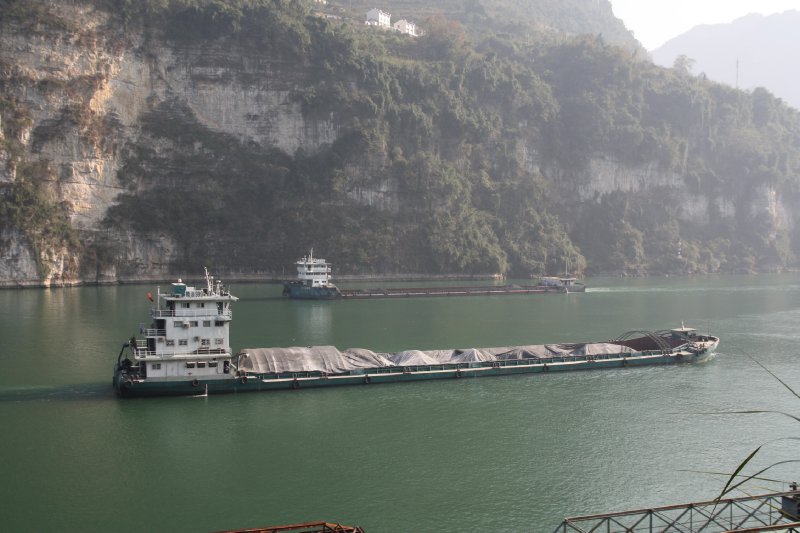 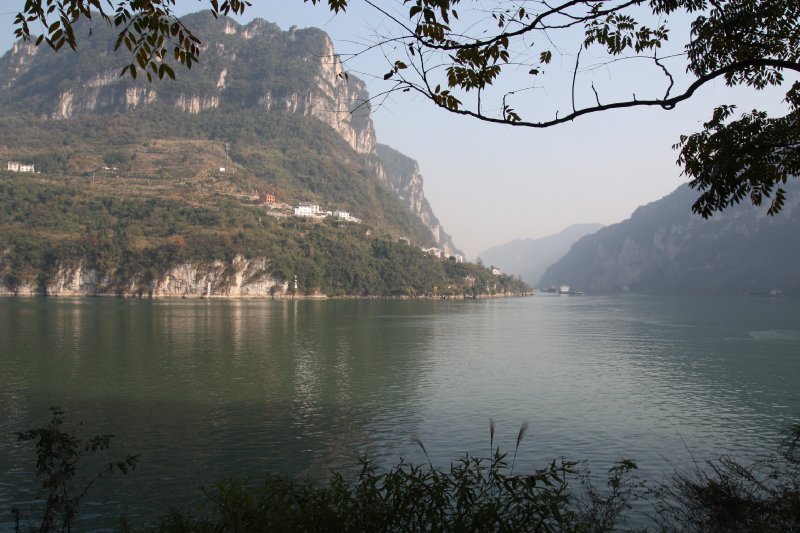 with just the one (small) cruise boat, which had probably gone up to the dam and back 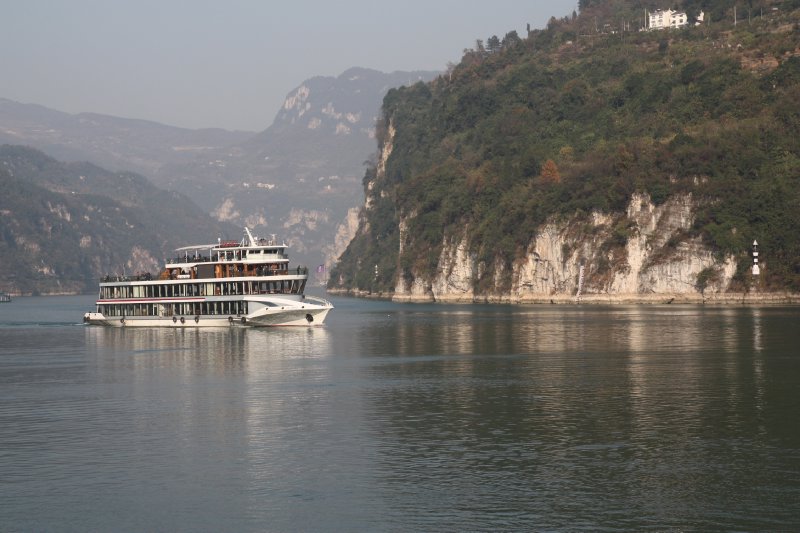 Walking back round the river, I figured I'd get on my boat at the first place it had stopped, but I overshot and ended up looking at this 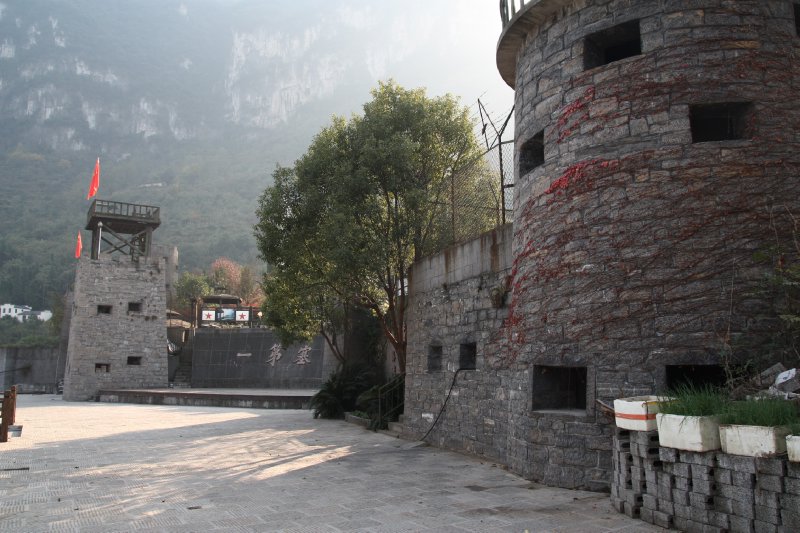 These were defences to repel the 1940 Japanese invasion - they have been left in place because this is a very important spot: this is where the Japanese were turned back.

Back where I started, I received a big, enthusiatic wave from one of the ticket takers. Maybe I should say something about her - she didn't have much English, but she did her best to talk with me, and she was impeccably turned out in a sort of dark blue great coat, but of a much finer weave than would be normal. And she was very tall, and quite solemn looking. At the moment, I'm reading Anthony Trollope's Orley Farm, and at one point he writes about guys falling revocably in love on a daily basis: meeting her, I knew exactly what he meant. So when she waved, I dithered a bit and thought, since everyone was asking it of me, I could go ask to take her photo - this is when she hid!

Posted by NZBarry 07:58 Archived in China

I like the statue of Chairman Mao incinerating a butterfly with a magnifying glass.