So, Wonder Wang came through, with no thanks at all to Paypal. In their wisdom, they decided my payment was suspicious and reversed it, meaning I had to pay cash into an account at the Bank of China (where I found the people very helpful). This was to be my home for my so-called five day cruise 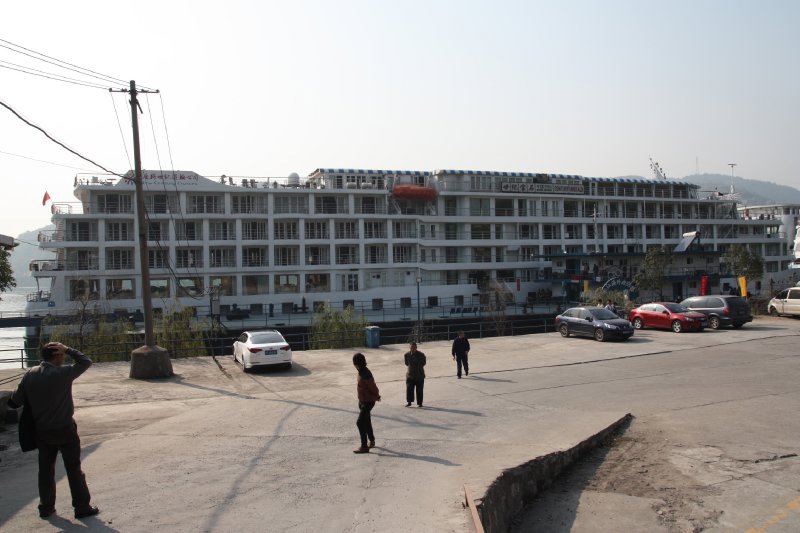 It was only a five day cruise in the sense that I stayed on board the first night (although we did not move until after breakfast in the morning) and then we were biffed off at 8:00 in the morning on the fifth day. Wonder had offered me a private car to take me to the dock, but it was something like $US50. Thanks to my trip the other day, I knew that I could get a public bus which would drop me nearby for 20 cents - that made my choice for me! I was a bit worried about carrying my bag, but I invested in a $10 luggage trolly thingey which has proved to be WORTH ITS WEIGHT IN GOLD! Thanks to half of every scooter ever made being on Chinese footpaths, the footpaths here are pretty well set up for wheeled traffic. Despite my reconnaissance, I still managed to get off at the wrong stop and had a terrifying walk in the dark on a busy road with no shoulder, but once I was on the Century Emerald it was time to relax. My cabin was very much like a hotel room 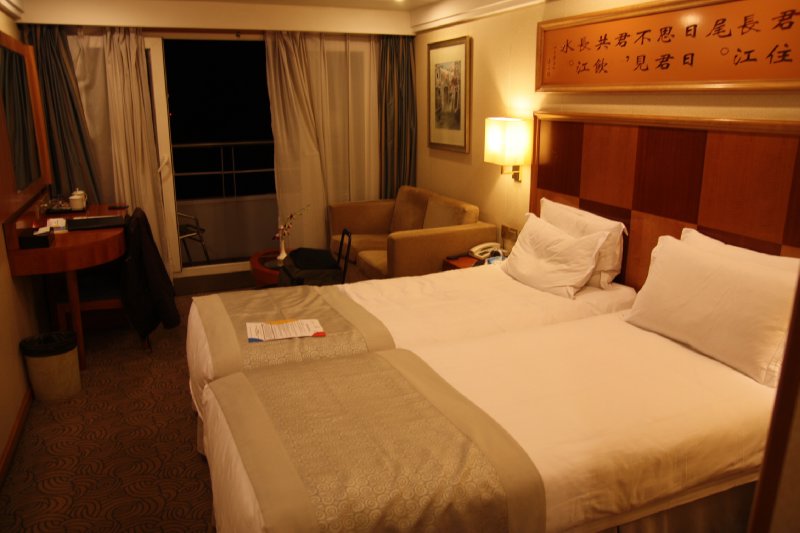 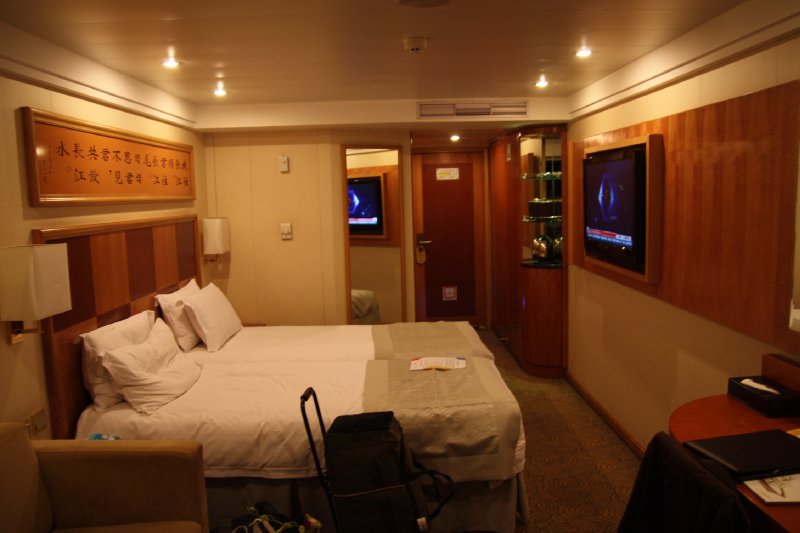 with a nice balcony where I might have had the odd cheeky beer as I watched the world go by. I took a bit of a gamble with my booking - it was $US400 plus a $US300 single supplement, but I figured that since was off season and going the wrong way (most people take the faster downriver cruise), the chance of having to share with someone was pretty small. Just as well, they didn't produce someone, as those beds look mighty cosy for strangers to share!

I was told by "River Guide Ruby" that I was the only English speaker onboard - certainly none of the other passengers said anything to me, except for a Chinese fellow who lived in France. Apart from giving me some information, Ruby didn't say much to me either, so I was pretty much left to my own devices - which didn't worry me. After I had checked in, I checked out the boat - five levels of cabins, two bars, a library, massage area, beauty salon and dining room. This took about 30 minutes, by which time I was ready to get off again - but the whole point of this cruise was for me to slow down and relax, which I ended up doing quite well.

The experience was rather like being in a rest home: I had meals at set times, with a group of generally older people (there were a couple of families with young children). I was sat at the table that odd bods sat at - Ruby's boyfriend, a couple of maritime types, the women running the onboard teashop. The food was pretty good - they're pretty proud of their bacon in this part of China, so breakfast tended to be little pork sausages, bacon, fresh fried eggs, croissants and the like - there were various other options which I didn't really fancy. Lucnhes and dinners were quite similar - various local veges, fried rice, several hot dishes (like chicken curry, braised pork and tomato, spaghetti bolognaise...). I was quite impressed with the attention to detail - the TV had been set up in my room to only receive English channels, and they put on specific English speaking guides for the excursions.

I sat out the first excursion, because it was to the three gorges tribal area 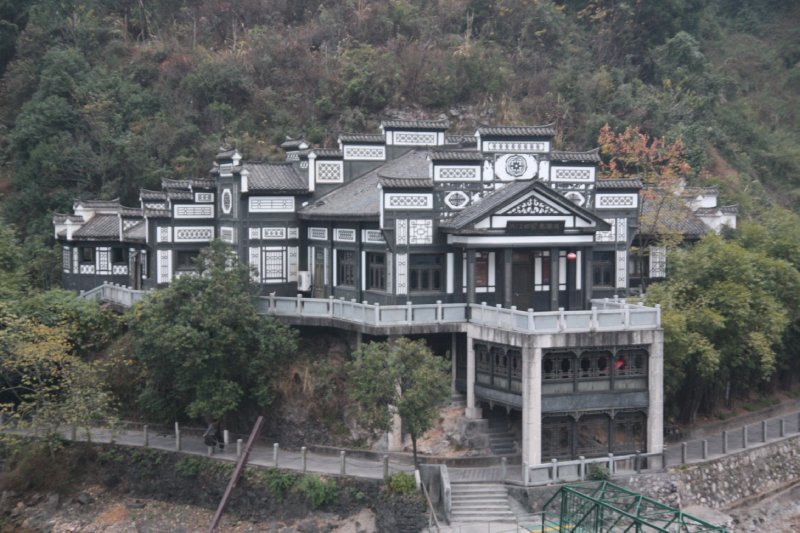 I had already visited (and I had much better weather when I did). The second involved the three gorges dam - I had thought that we would go up and nose around at the dam face to get a good look at its enormity (it is the largest in the world, and raises the water level by about 120 metres) but, no, instead we went to the Three Gorges Scenic Area, a park on a hill above the dam. As a result, this is the only look I had at the dam 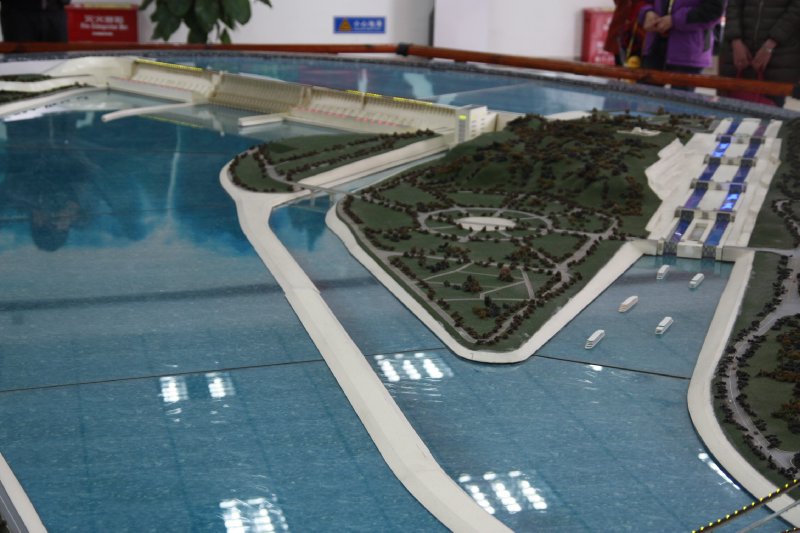 I did learn that when they diverted the river, the most effective shape to build the necessary channels is a tetrahedron 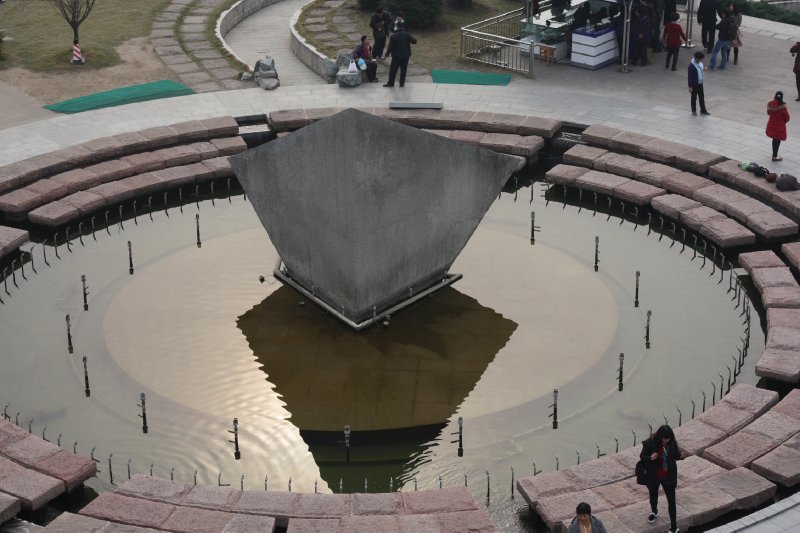 We did get to have a look at the top of the dam. There were a few shops (as always): at one, a couple of fellows were beating the hell out of something with mallets 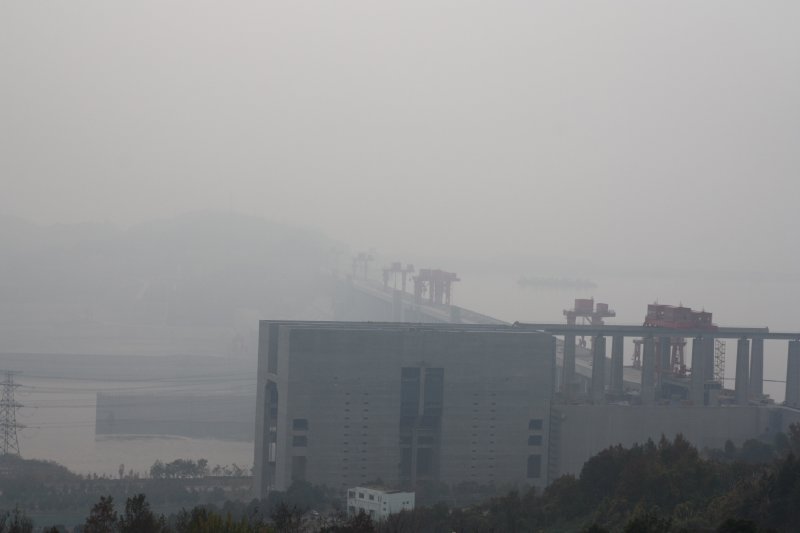 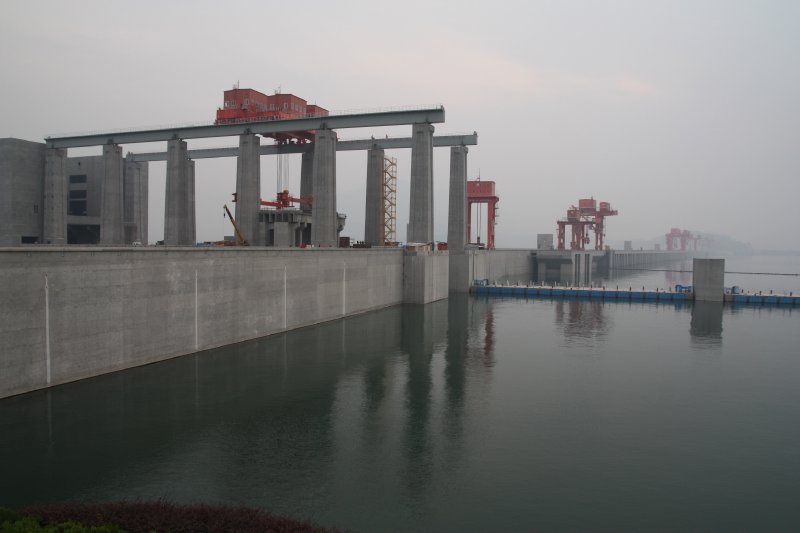 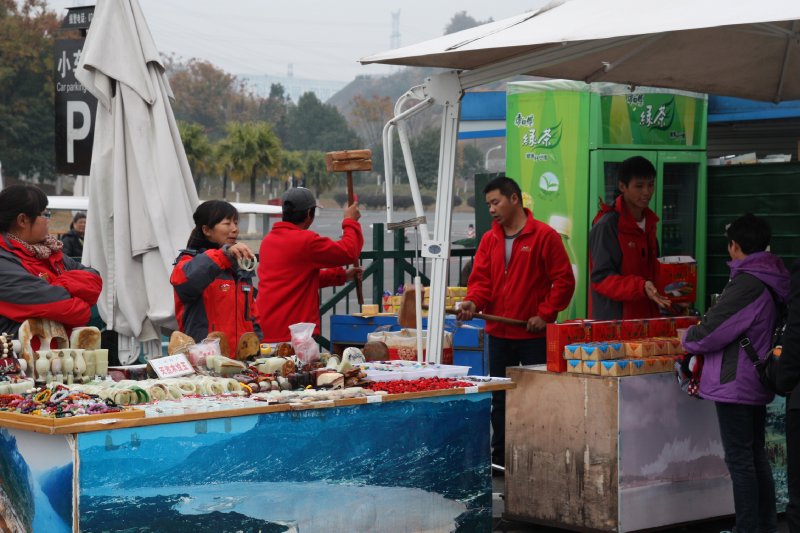 Of course, part of the trip involved going from Yichang (which was down river from the dam) to above the dam: we achieved this by going through five locks - watertight chambers with gates at each end. We'd go in one gate, it would close, the water would rise 20 metres or so, we'd go out the other end: each rise only took a few minutes. Most of the delay involved arose from having to wait until there were four vessels ready to go through, and then for them to manouvre into a tight spot 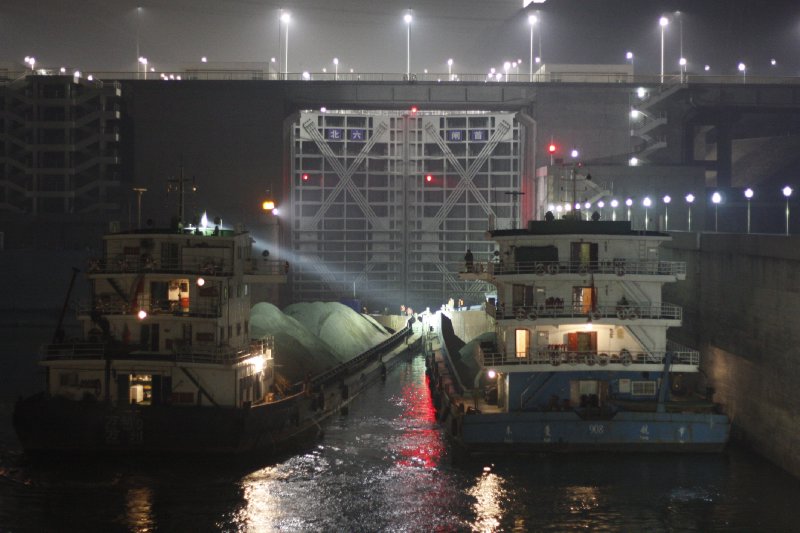 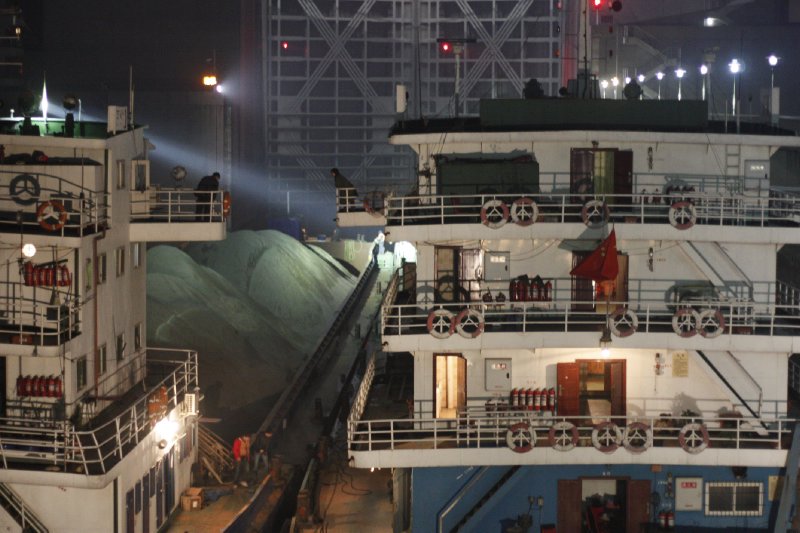 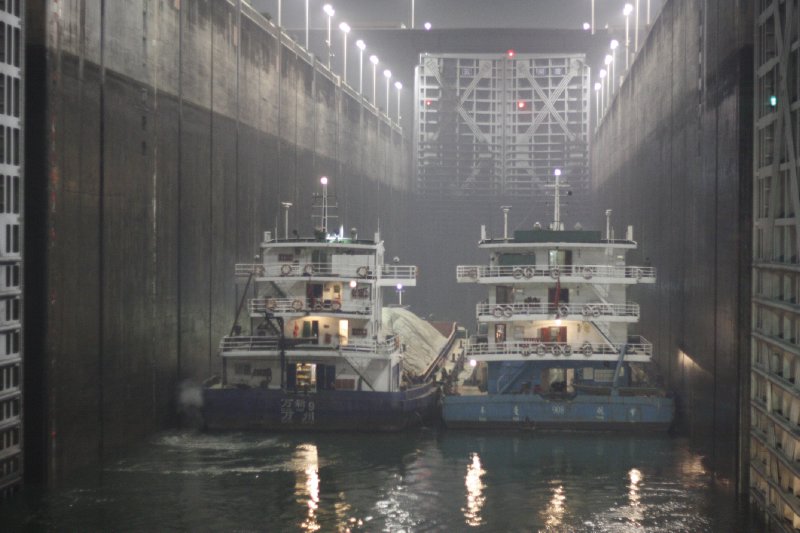 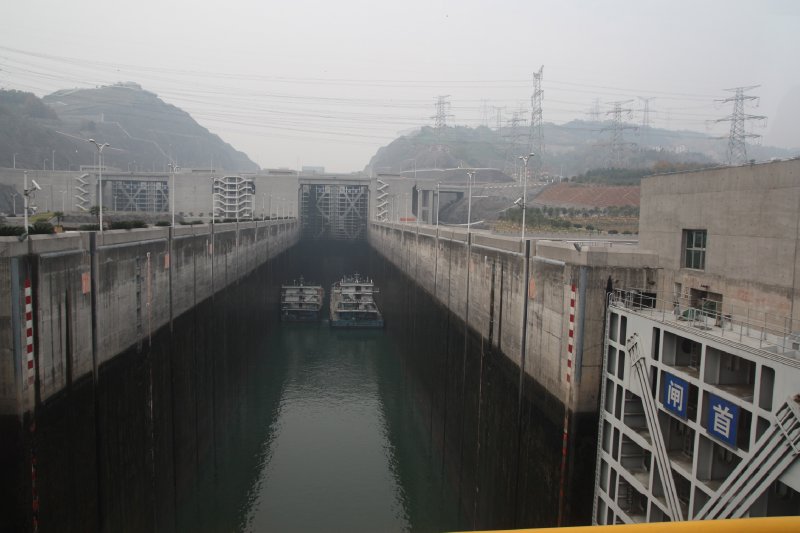 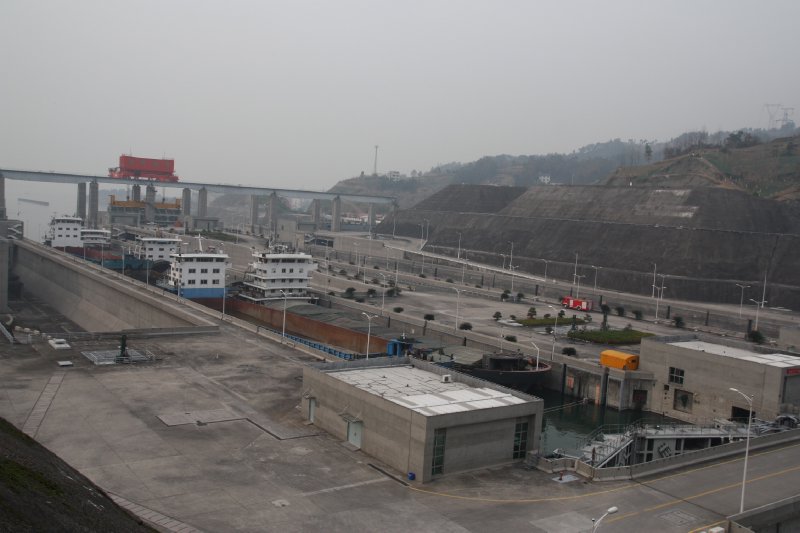 Our next excursion involved hopping onto little boats and going up into the Lesser Three Gorges - before the dam, these only had a trickle of water, but the dam changed everything 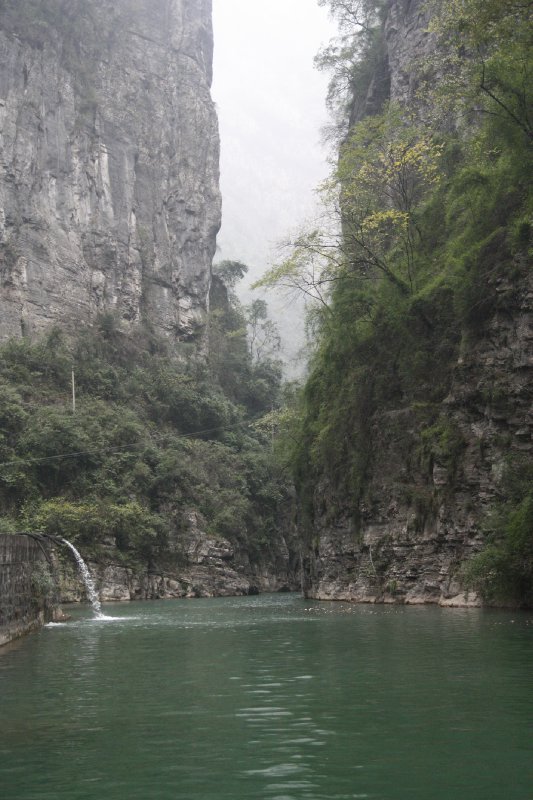 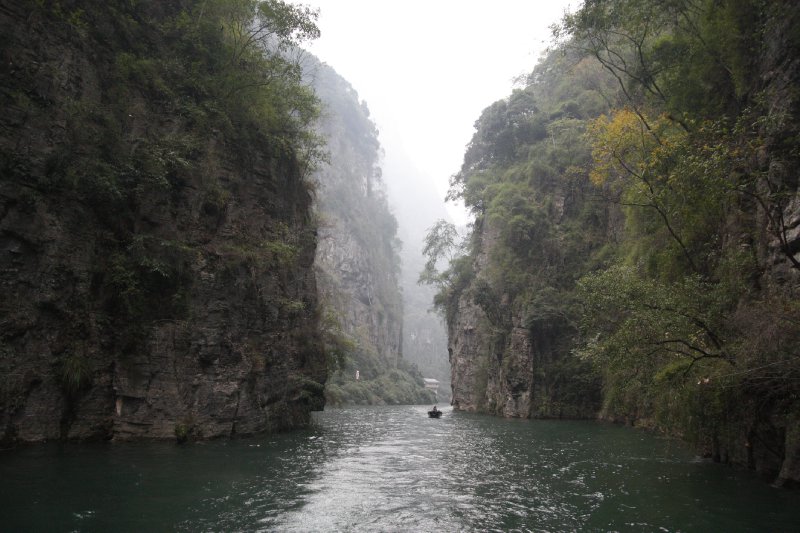 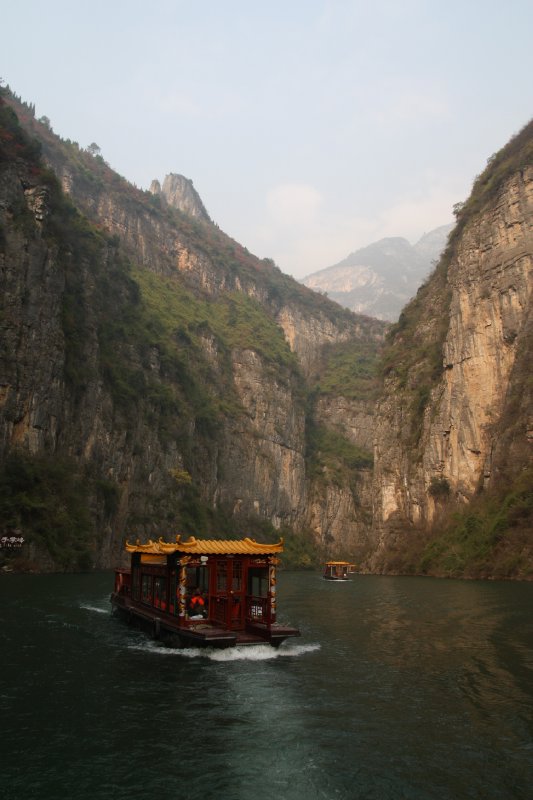 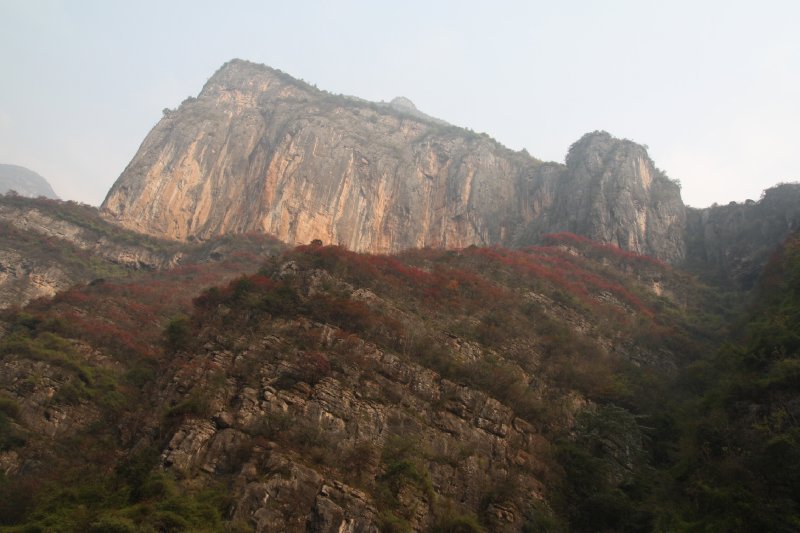 At the end, we got off and had a bit of a walk, and there was a chance for the guides and passengers to have a bit of a dance 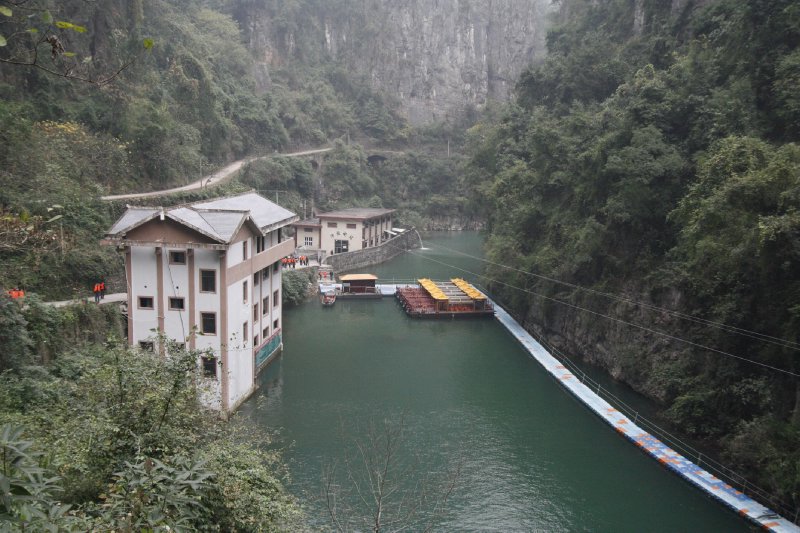 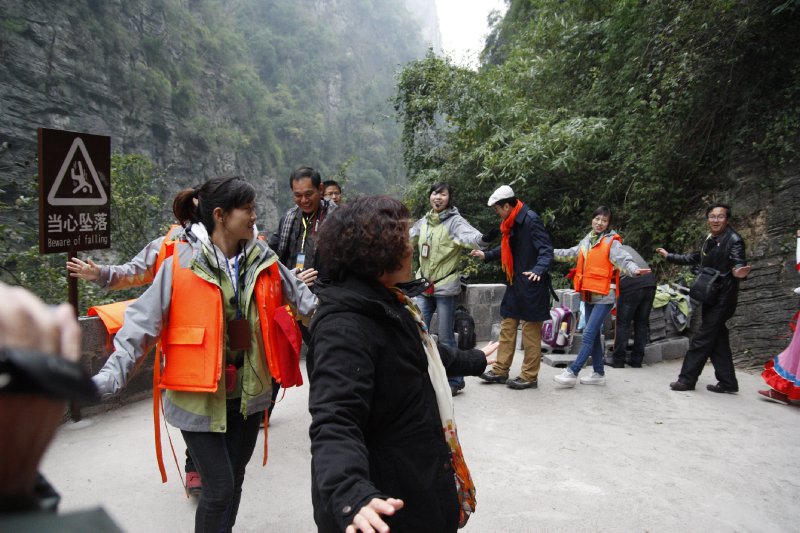 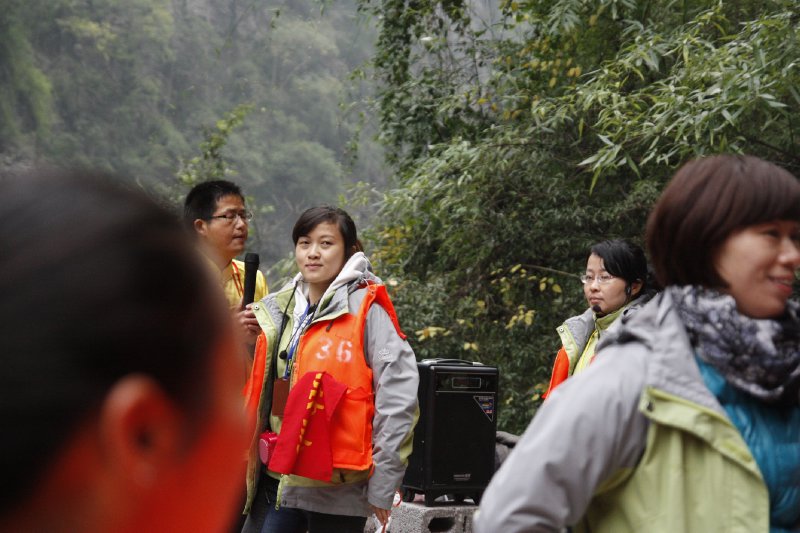 The guide in the centre of the last photo thoroughly impressed me. This trip was about an hour each way, but she managed a non-stop entertainment: I had no idea what she was saying, but clearly there were lots of jokes and banter, and she'd run a quiz with the passengers. On the way back, she was selling tea and other bits and pieces: even without understaindg what she was saying, she had me wanting to buy what she was selling. The English speaking guide looking after me, by way of contrast, maybe told me four things, things I could see for myself. I learnt more from Peggy, a guide from a different boat whose family came from the area: she walked up to the dancing with me, trying out her English.

On the way, we made a stop to look at some random landmark - this involved climbing up a stone path set into the gorge wall and, worse, coming back down - without the benefit of any sort of handrail. The photo of the path didn't come out very well, in the sense it doesn't really indicate it was vertical 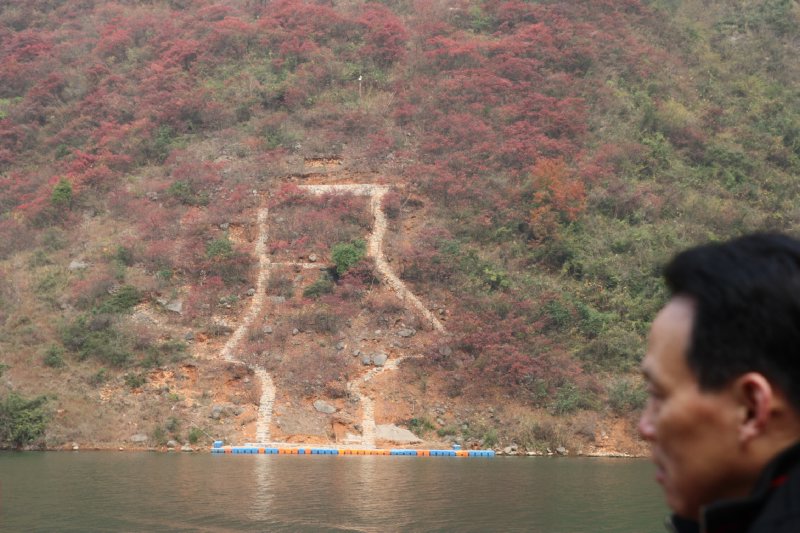 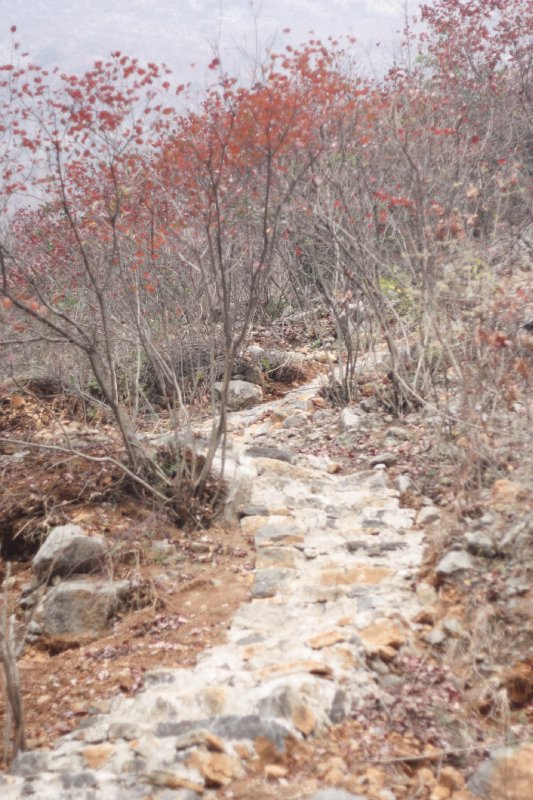 On the Saturday (fourth day, but really the third) I had perfected my relaxation technique so well that I only emerged from my cabin for lunch - there was an excursion to see a pagoda which I skipped and in the evening, there was a formal banquet, which I also skipped - my other meals, I ate and left fairly quickly because I didn't feel all that comfortable, and this would have meant sitting there for a couple of hours, plus I know there are some things I would not want to eat, and didn't want to upset people.

All in all, yes it was a great way to relax but not a great cruise: I only have one other cruise experience, which involved a two day ferry down the south coast of Chile, which was much better (more dramatic scenery and I made friends with my fellow passengers). So, I was glad to have done it but not unhappy to get off in Chongqing 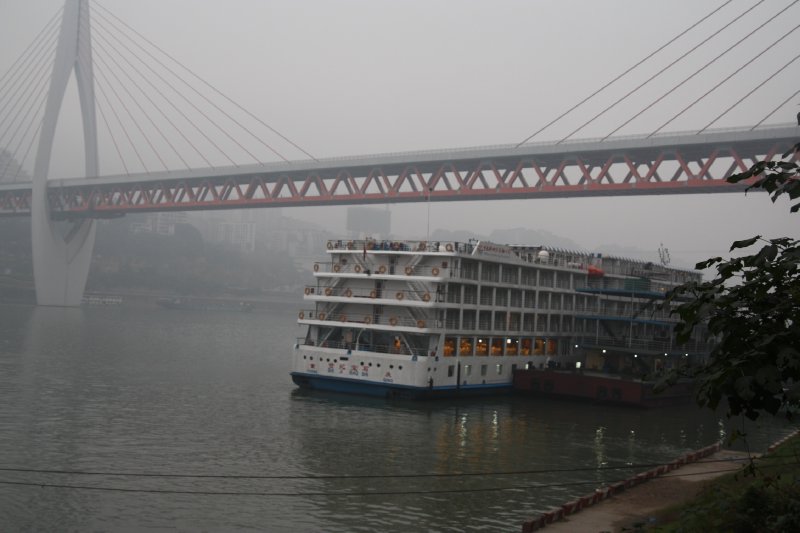 Posted by NZBarry 06:57 Archived in China