Chongqing: A Taste of New Zealand(!)

This will be a fairly short post, to wrap up my last day in Chongqing. The plan was to go over to the People's Square and explore the Three Gorges Museum, which turned out to be a longish walk away, not helped by the fact that it was actually raining (the first I have seen). I had some sort of problem with buying an umbrella from a street vendor, their products seemed curiously flimsy and rather garish in colour, so I stubbornly insisted to myself that I'd get one from a proper shop or not at all and, besides, it couldn't rain for ever (luckily, it didn't). Nonetheless, when I found this shop cunningly concealed under a hill 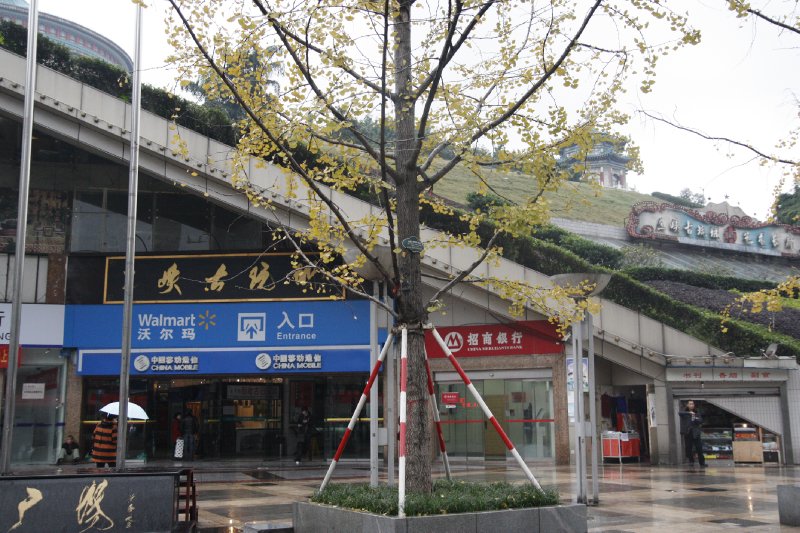 I went in. I don't know whether to admire Walmart for doing its best to be hidden, or be annoyed with it for daring to locate itself beneath the People's Square. I have to say, they don't look much like a Walmart store inside, much more like a typical Chinese supermarket, which often have a range of other stuff (clothing, bags, electrical, umbrellas...) alongside their fresh food and grocery items. Before hitting the museum, I noticed a bakery - and I was in luck, it was one of the few that have this really dangerously bad for you to eat thing - it is sort of like a cro-nut, but is in the shape of a twist. Approaching the museum, I was quite impressed by this building, which was entirely lacking in identification 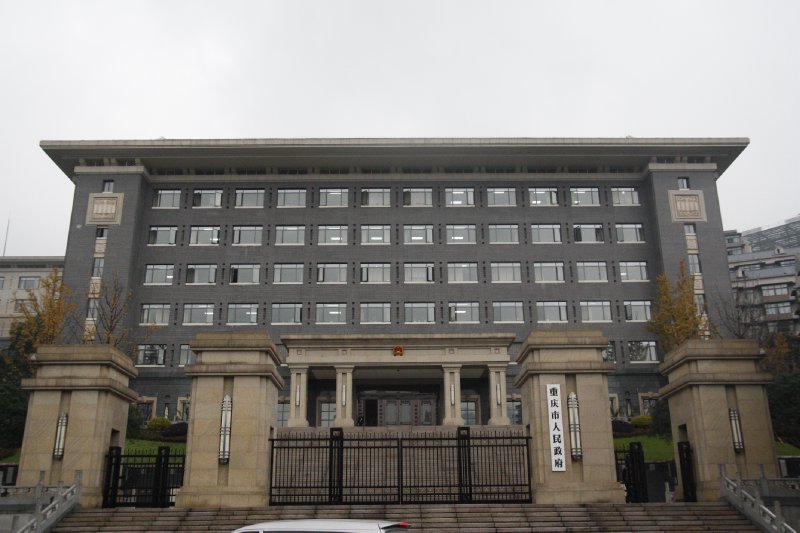 It is the Chongqing People's Government building, according to google, sitting alongside the People's Park - which has the "Great Hall" or "People's Auditorium" at one end 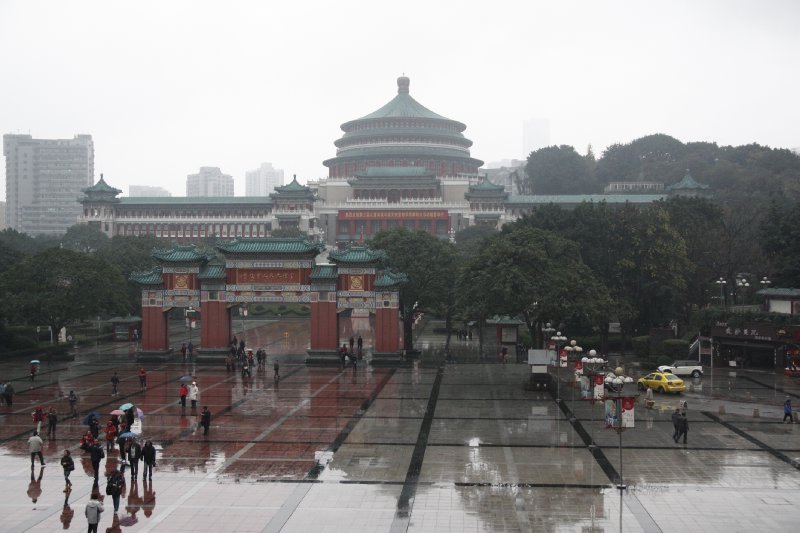 and the Three Gorges Museum at the other 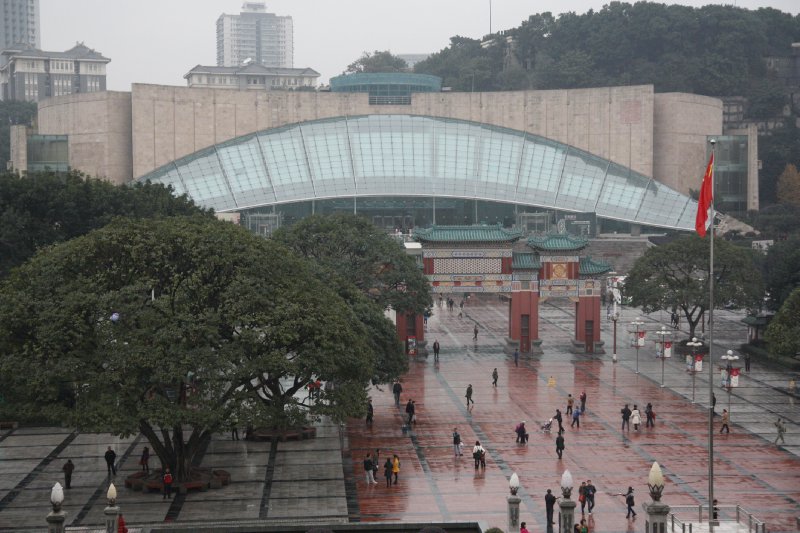 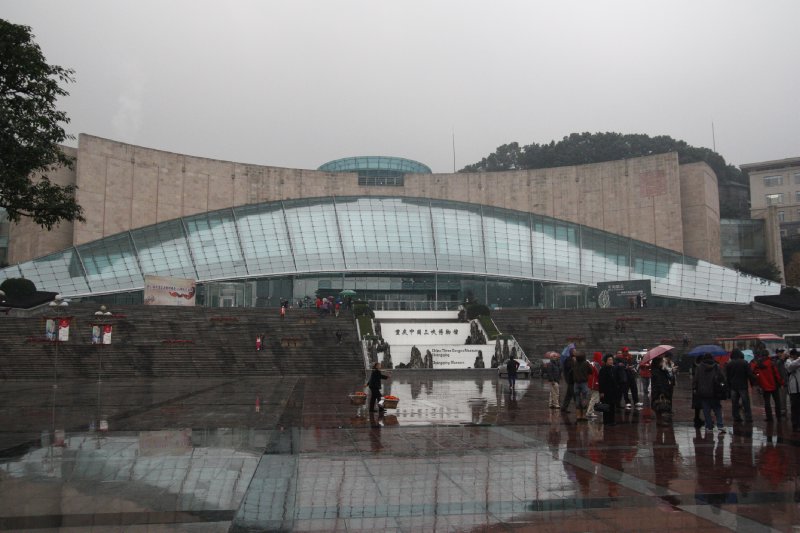 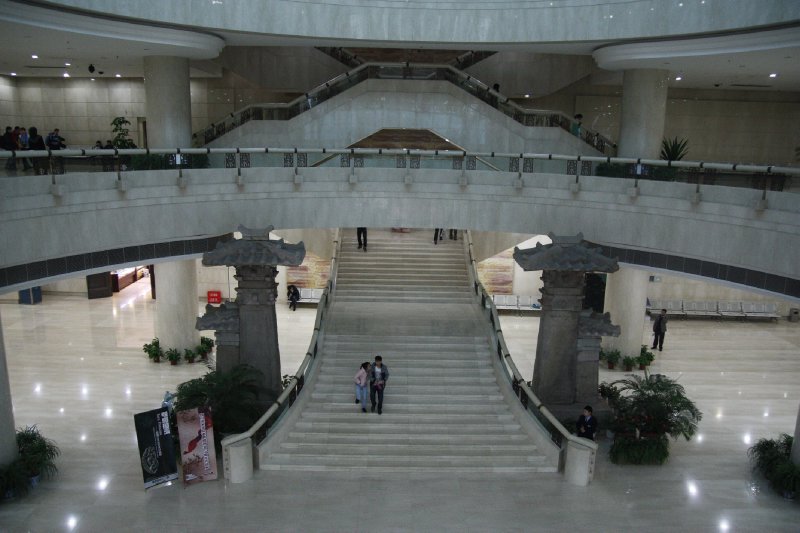 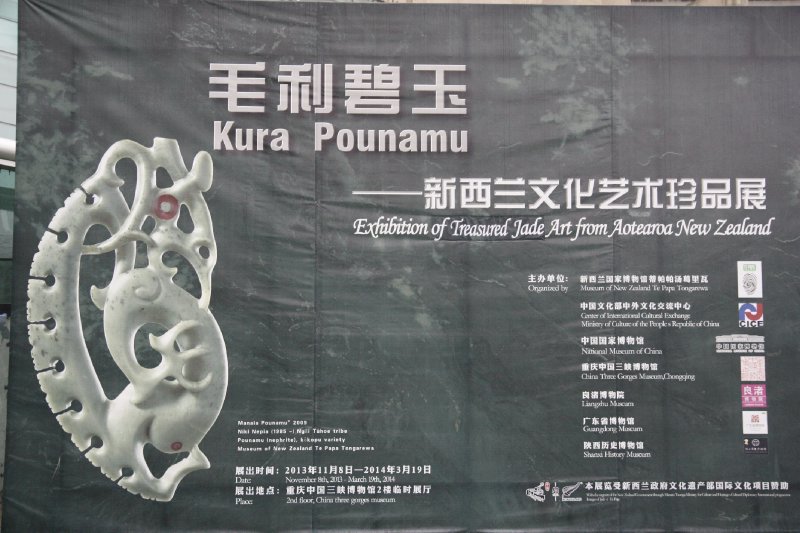 Sure enough, there was a big collection of tiki, mere and adzes along with descriptions and examples of NZ greenstone 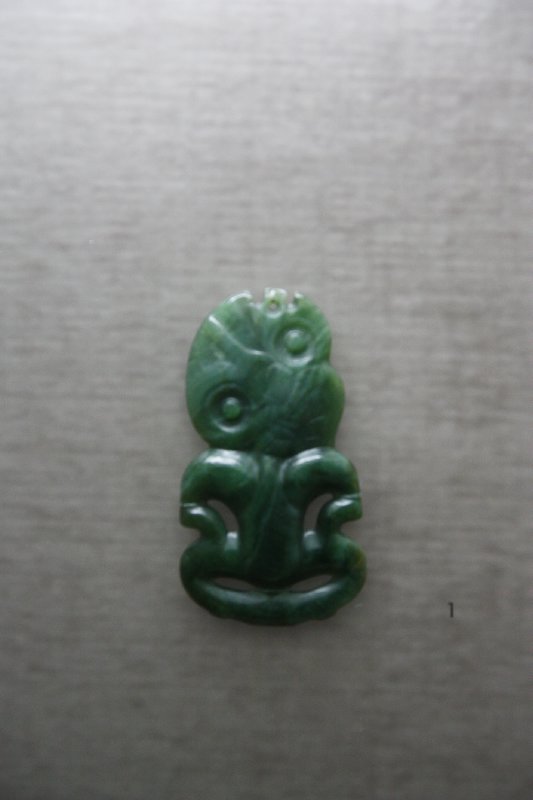 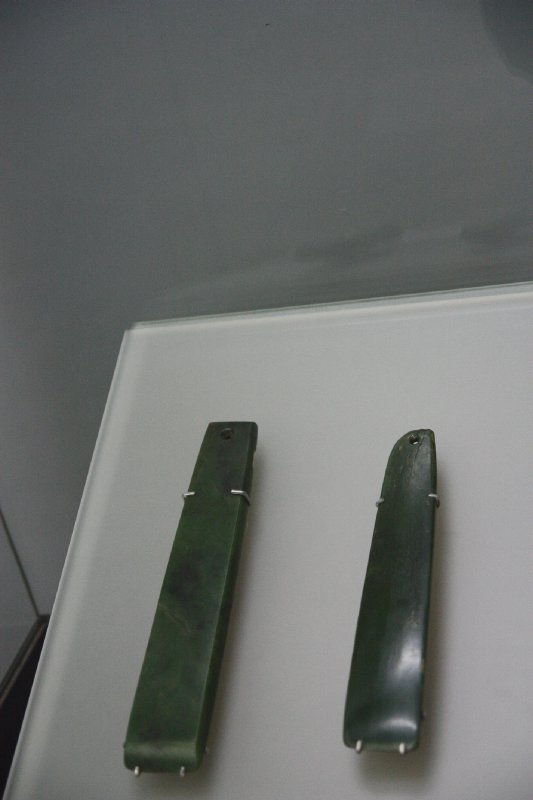 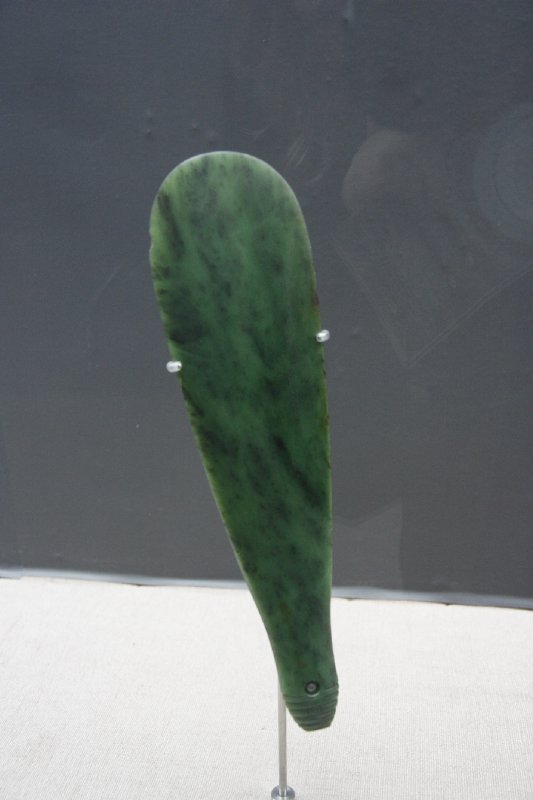 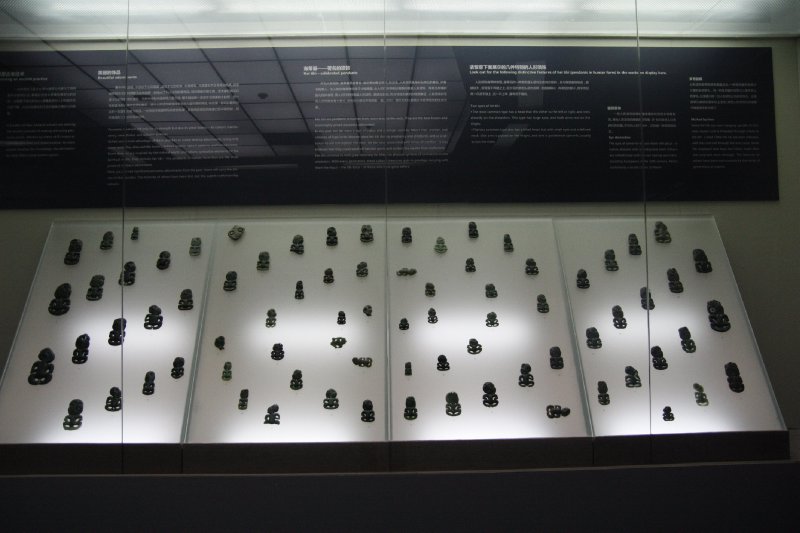 The locals seemed genuinely interested in looking at these items - there were quite a few in this part of the museum, and they were taking their time. I, in turn, went and looked at their stuff. Being the Three Gorges Museum, there was a lot of information about the Gorges and the Dam, with exhibits being set out to show what life on the river 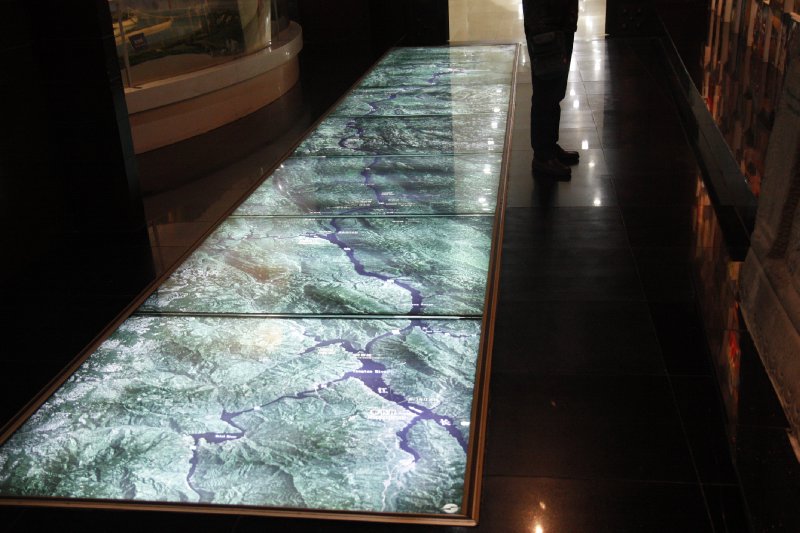 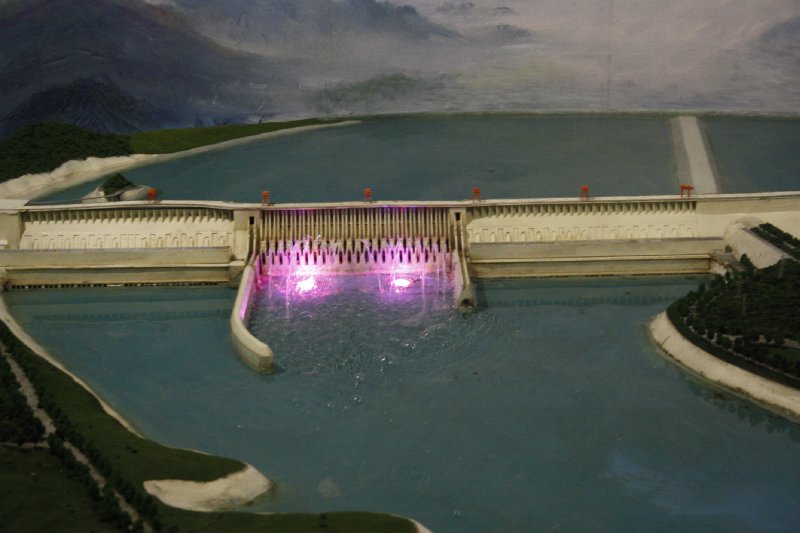 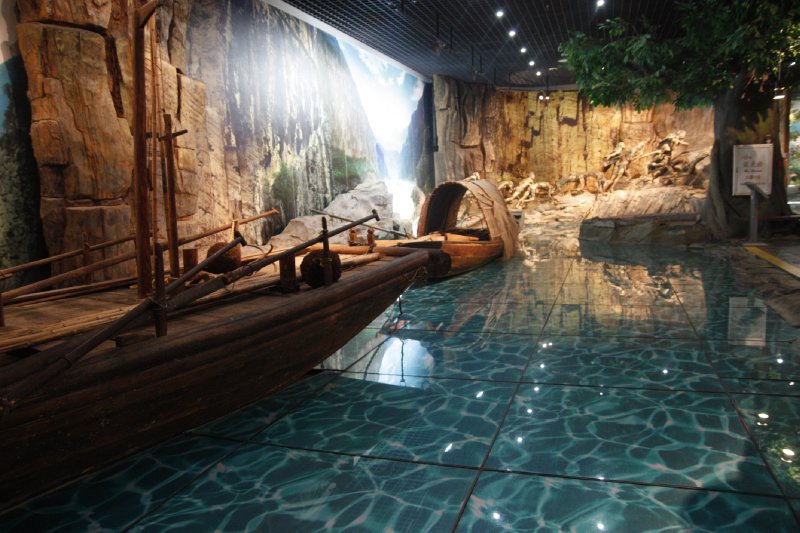 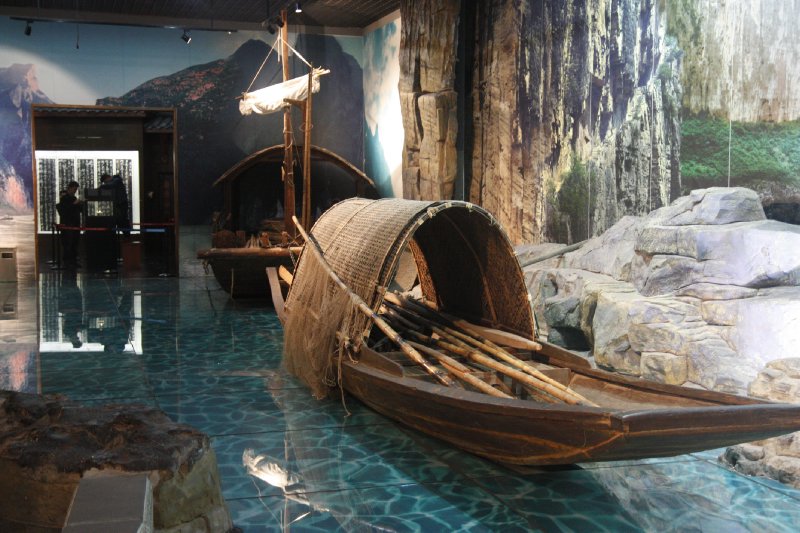 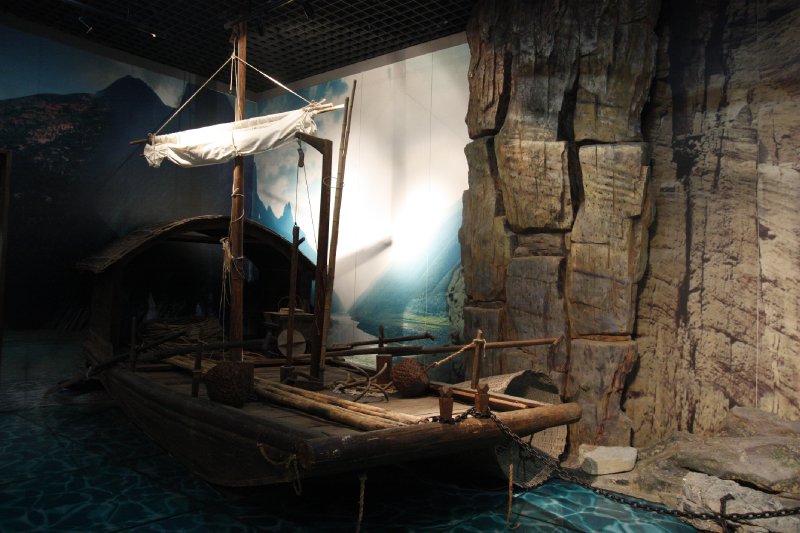 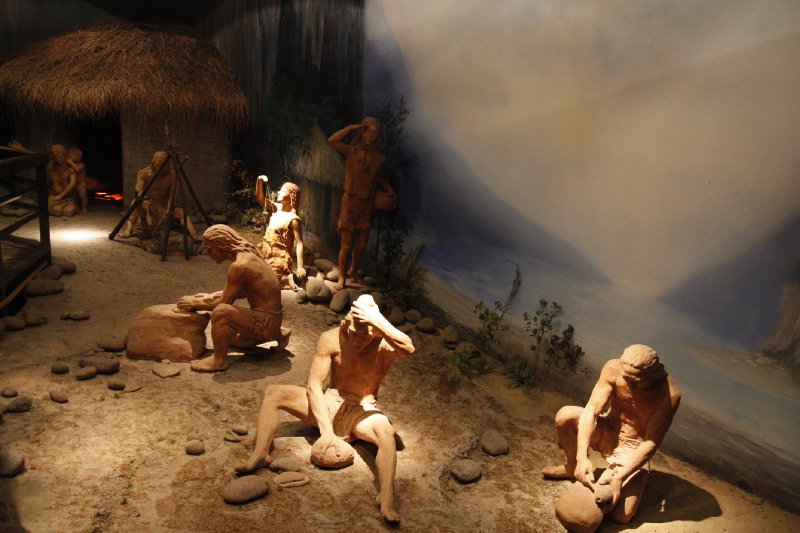 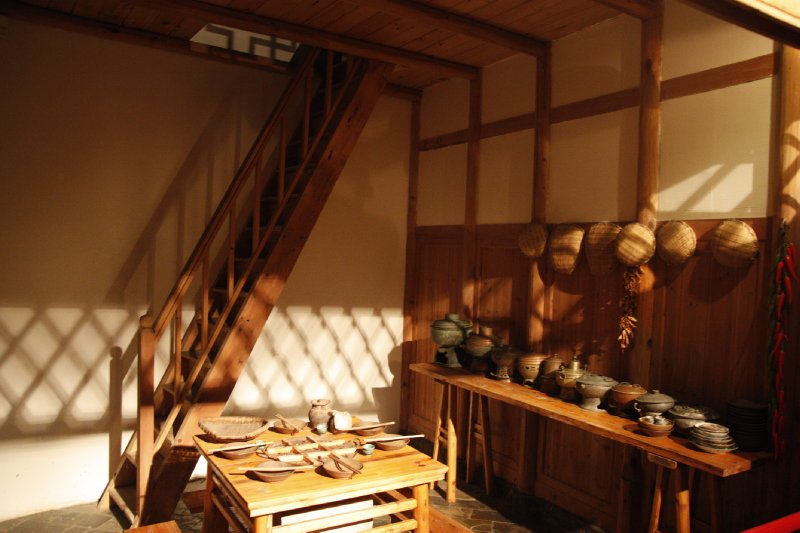 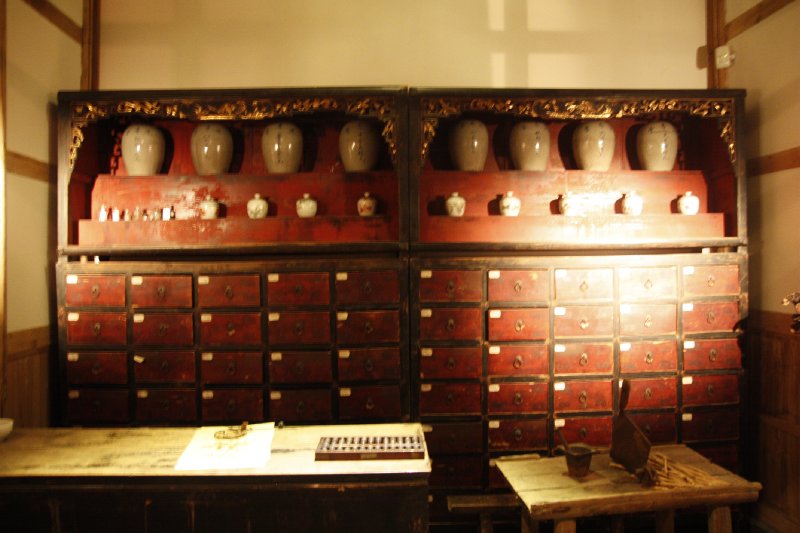 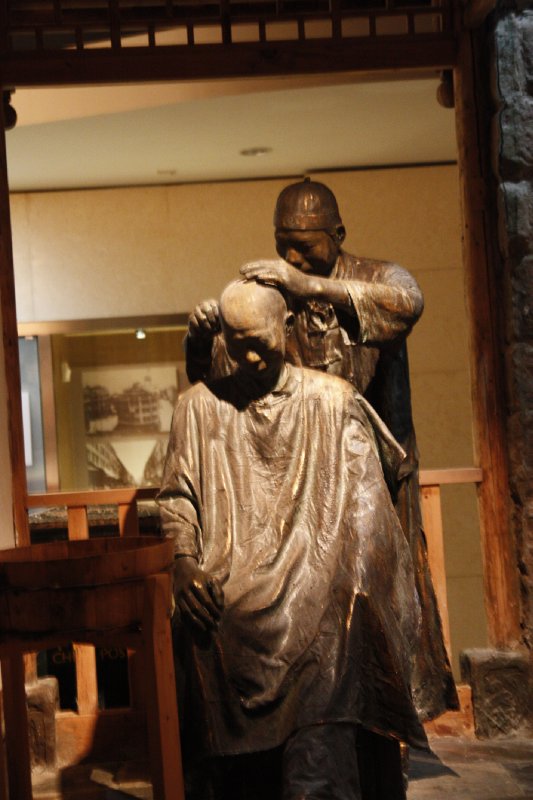 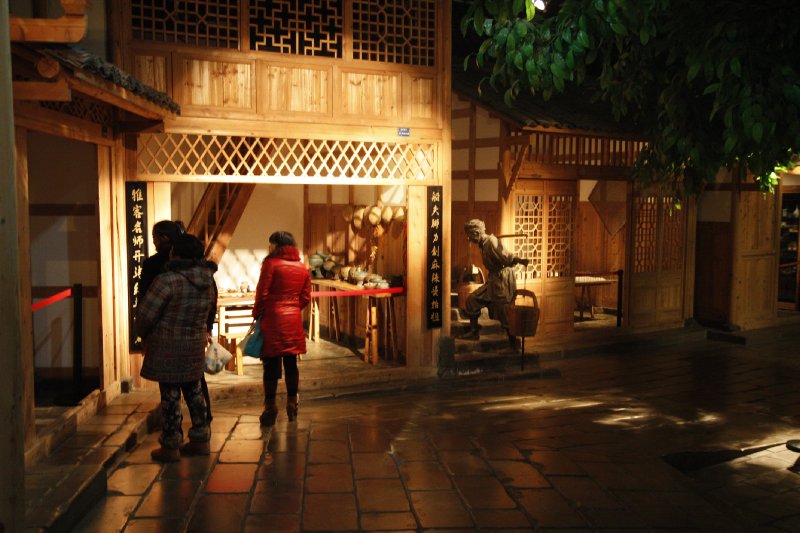 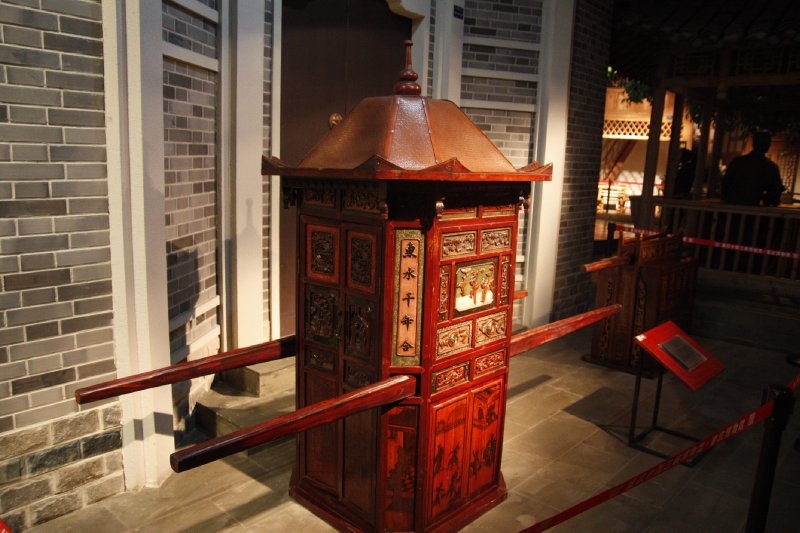 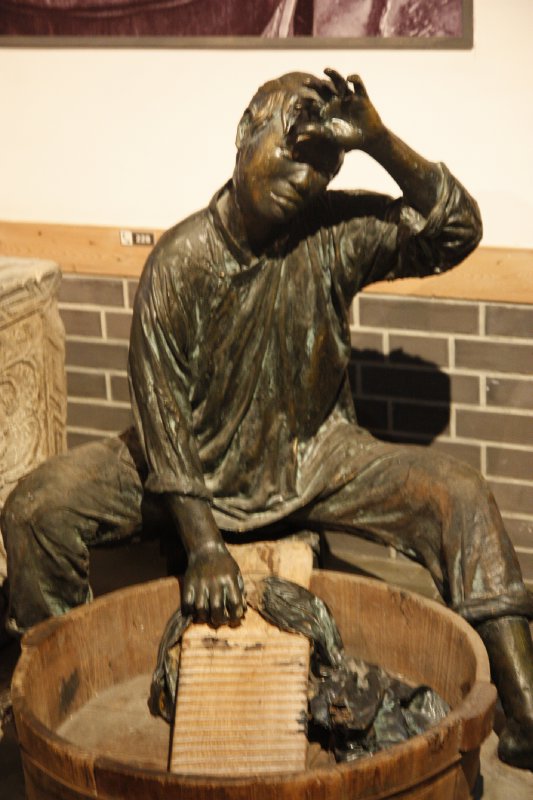 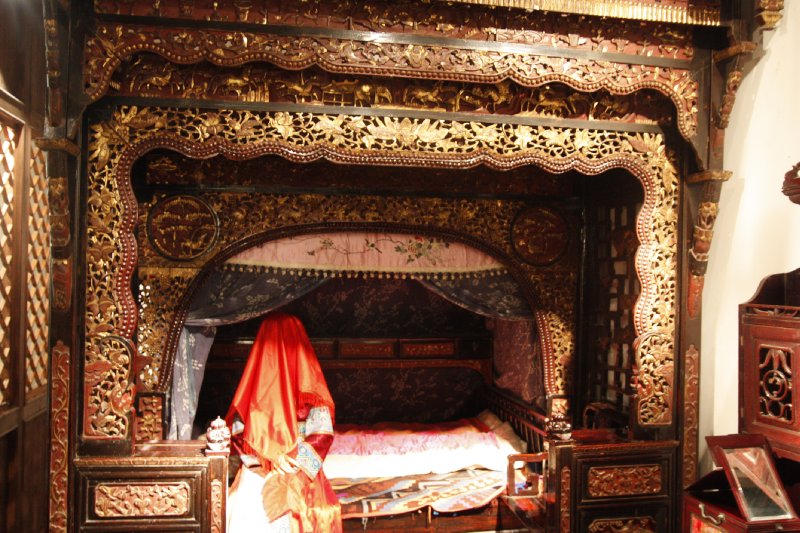 That bed looked very impressive, and I couldn't quite work it out, but it looked like those raised panels actually fold down, and close the bed off altogether.

In Sichuan and the neighbouring Yunnan, there is a hugely diverse range of tribes - a floor of the museum was devoted to identifying the arts and crafts of the various ethnic groups associated with the Three Gorges: I think just seeing the different clothes worn by these groups gives an idea of how many there are (or, more accurately I suspect, were) 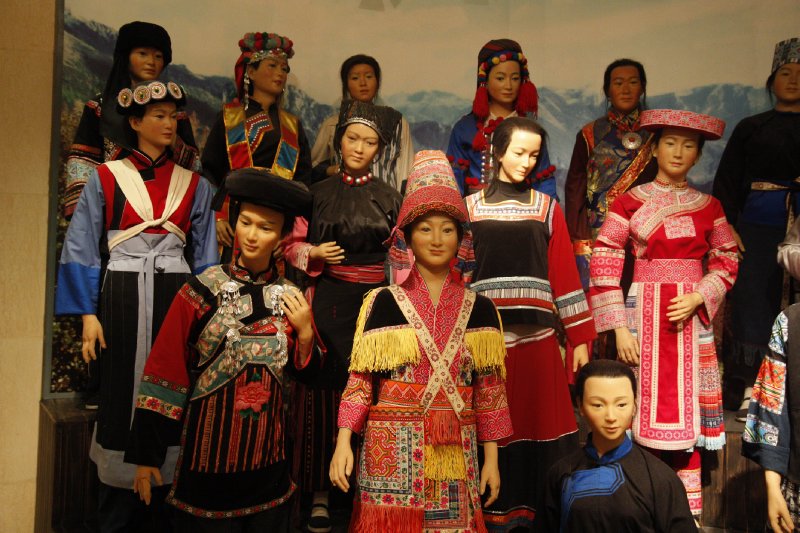 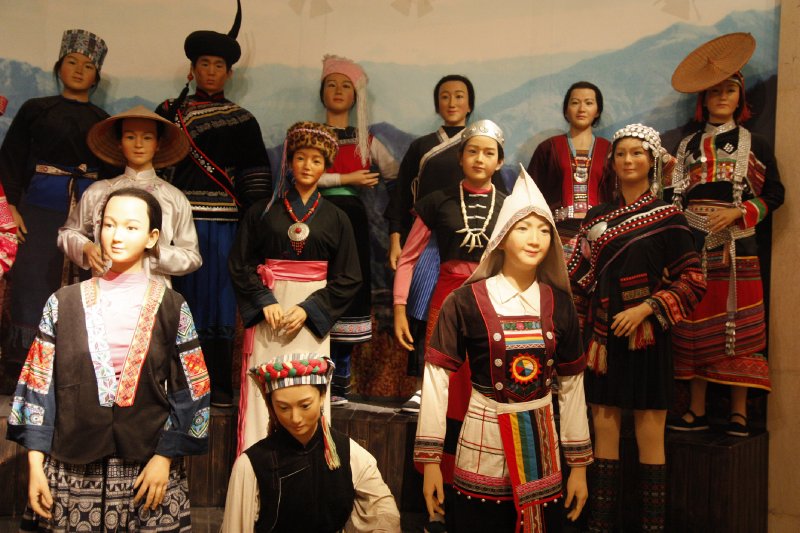 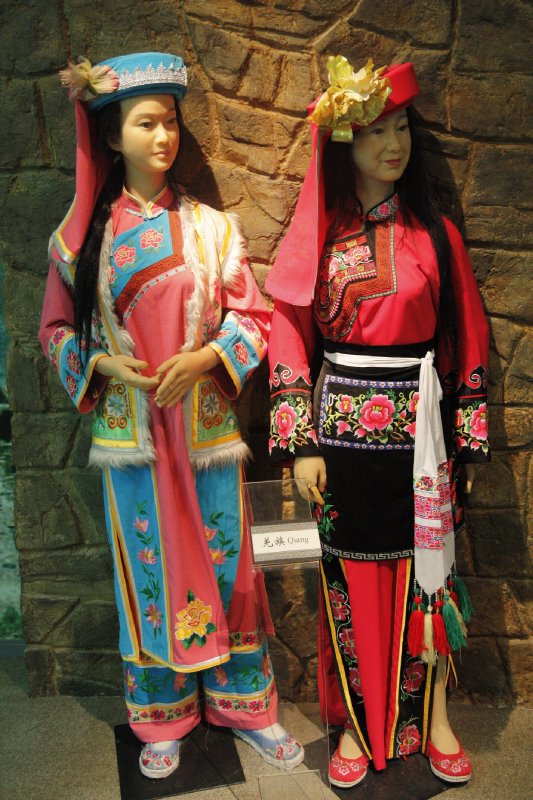 Going back, I managed to get a bit lost: I could never get really lost, as I was walking along the river bank and had a metro line above me, but the plan was to go to the railway station to sort out my onward ticket, but I didn't know quite where it was. Eventually, I gave up walking and hopped on the metro. I'd been in last night to try to get tickets to my next destination but, apart from a train getting in at 1:14 a.m. could not find the trains the internet was telling me existed. My new helper could not either, so I gave up and got myself a ticket on the fast train to Chengdu, where I overnighted and then started my trip south.

Posted by NZBarry 09:55 Archived in China