It is a bit over 1100 km between Chengdu and Kunming: China is presently building a superfast rail track which will see you there in 4-5 hours but at the moment, it can take anywhere between 14 and 23 hours, depending which train you take. I can certainly see the gains in efficiency from the faster train, but there is quite a cost - these fast tracks involve lots of tunnels and viaducts so that it runs pretty flat and the bends are turned into very gentle curves. The older tracks are often only a single track, so you have to wait for the up train, and they run with the environment, so there will be the occasional hill or a sequence of twists to get round one, with tunnels and aqueducts being used when there really is no alternative. I have to say I prefer this sort of train - the fast ones seem to be more about transport than travel.

Not that I did the whole trip in one hit: I had a very important date with a salt mine and some dinosaurs, in a sweet city called Zigong, a mere 258 km down the line on the Fuxi River (yet another Yangtze tributary). I opted for the 10:00 a.m start as I didn't want to get up too early and was in Zigong mid afternoon. The train followed the river very closely, just a few metres above it. The area seemed to involve a lot more of the old-style intensive farming that has gone on for centuries than other areas I have seen - terraces not much bigger than a croissant cascading down to a rice paddy, with each terrace having several different postage stamp sized crops. Dirt footpaths provided access to all areas, and I saw a number of farmers out their with their hoes - a hard slog, but it seemed to be paying off in that the houses tended towards being quite modern brick places, often with a couple of storeys.

In Zigong, I had rather a nice hotel so I decided for once to dine in: they fed me leather for dinner. Not meat as tough as leather, but actual leather. They had a nice Western style restaurant with English menu but I thought that since I was in China, I would eat in their Chinese banquet hall: they evidently didn't quite expect that, and put me in an antechamber off to the front, and brought me pictures of the food on an IPAD. One dish looked good - strips of meat surrounded by a ring of broccoli: the waitress could tell me it was beef and spicey, and that was about it. The only feature the dish that turned up shared with the photo was the ring of broccoli; there was then a moat of chili sauce and a pile of minced up stuff (I detected garlic, but that was the only taste I could identify) in which there were grey strips of something - eating revealed them to be very tender (so obviously marinated for some time) strips of cow skin (or, as we call it, leather).

On the whole, I liked Zigong - on my side of the river, there was quite a strip of flat land on which they had built a new area of the town - an odd combination of home improvement stores, kareoke bars, the local government office and the Zigong library. Across the rver was the city proper, just a few streets of high density retail running along the spine of the hill, with lots of housing and eating places on the hillside facing the river and tunnels to get through the hill. Along bits of the river, there are said to be lots of historical tea shops - I don't know if the one I saw was historical or not 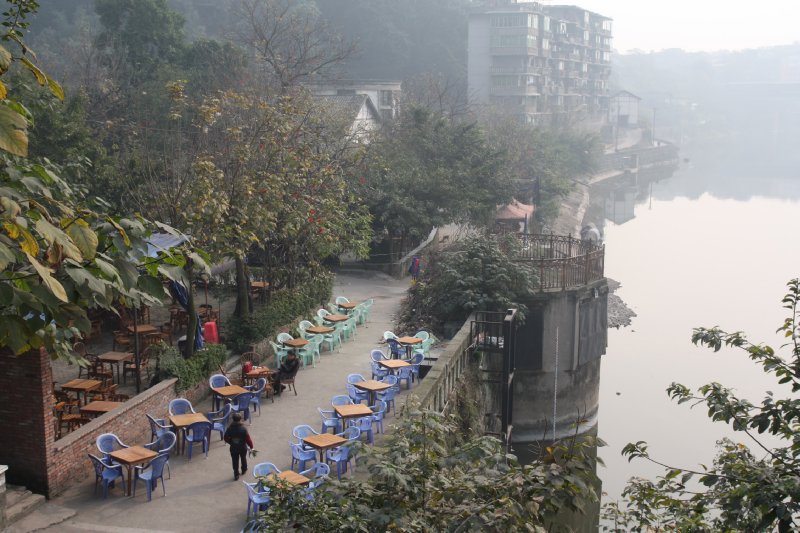 Something like two hundred million years ago, this area was the roaming ground of dinosaurs, yet somehow no-one seemed to notice until the 1980's (I find this particularly odd given that the other reason this area is important is for its mining) - since then, they have excavated the remains of something like 200 dinosaurs of all shapes and sizes over a 50 square kilometre area. In the late 1980's, the Zigong Dinosaur Museum 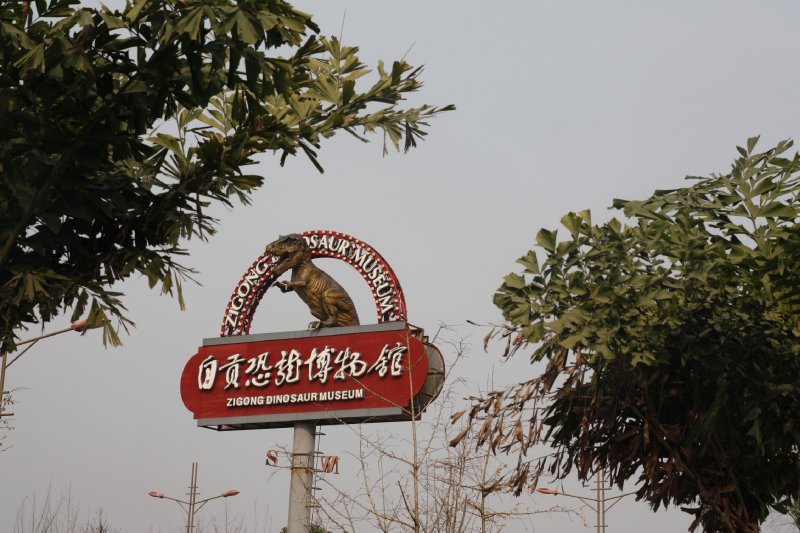 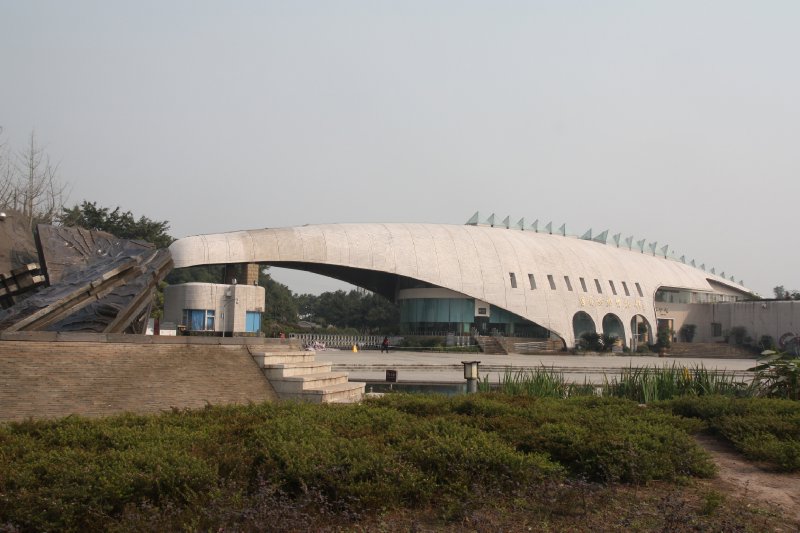 was established, which has a few exhibits devoted to explaining the life style of the dinosaur and some replicas wandering around outside 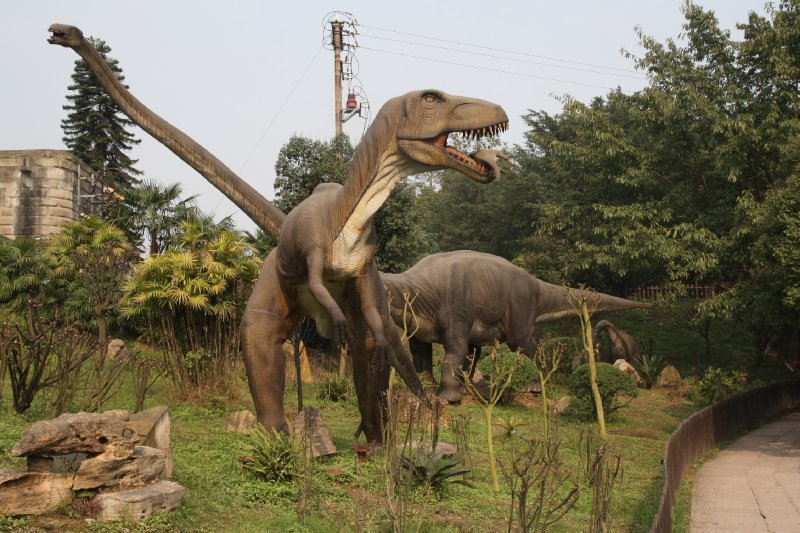 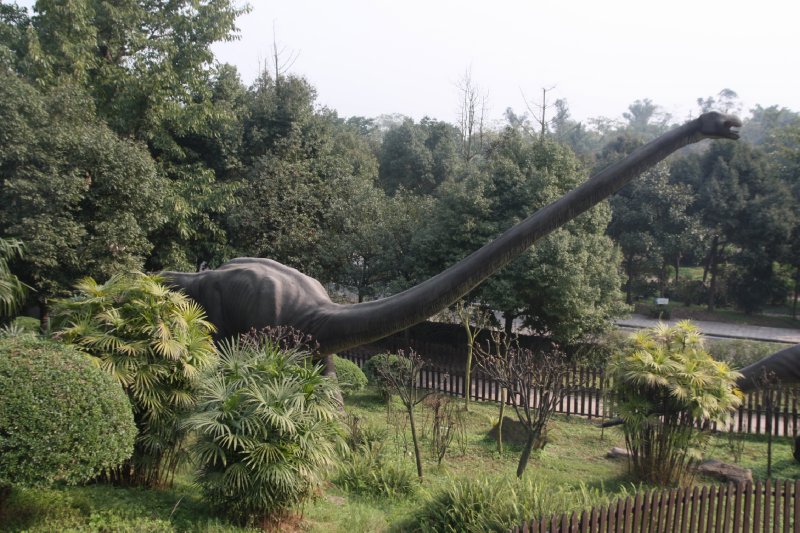 but the main feature is the collection of actual dinosaurs. There is one local fellow, Szechuanosaurus Zigongensis 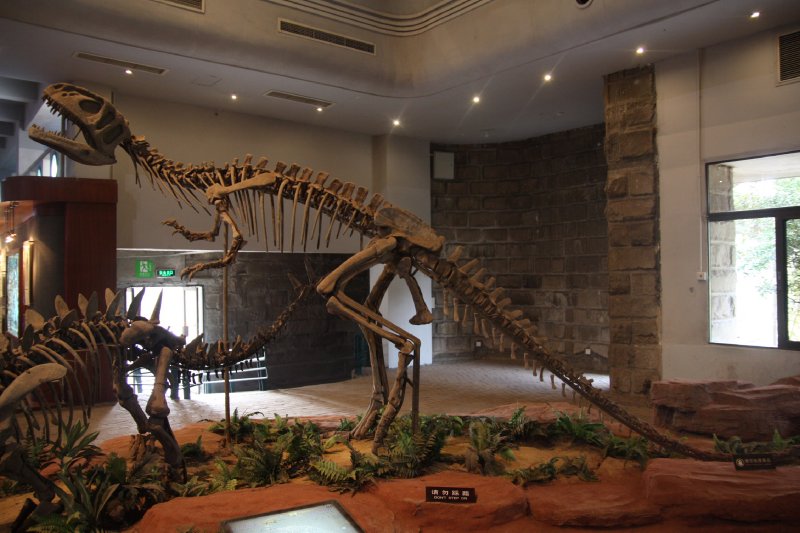 but the rest are presumably not just found in this area (I didn't keep a record of their names, sorry) but was impressed with just how mighty some of these fellows were. 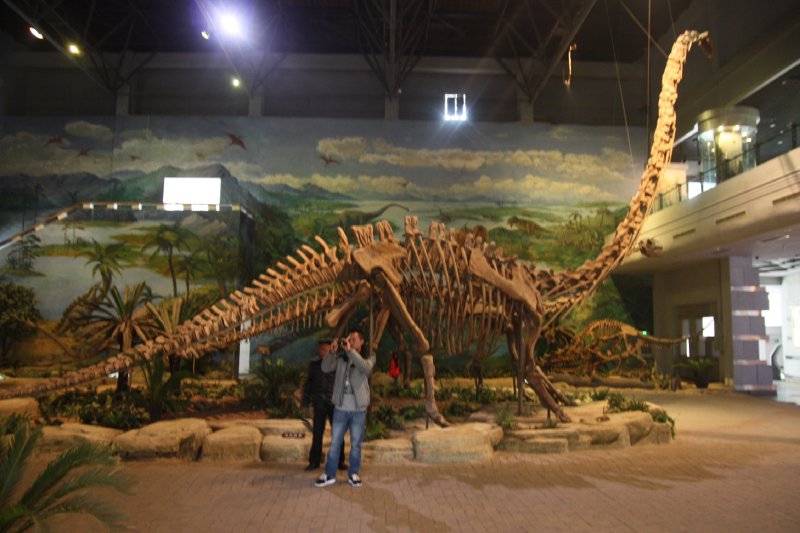 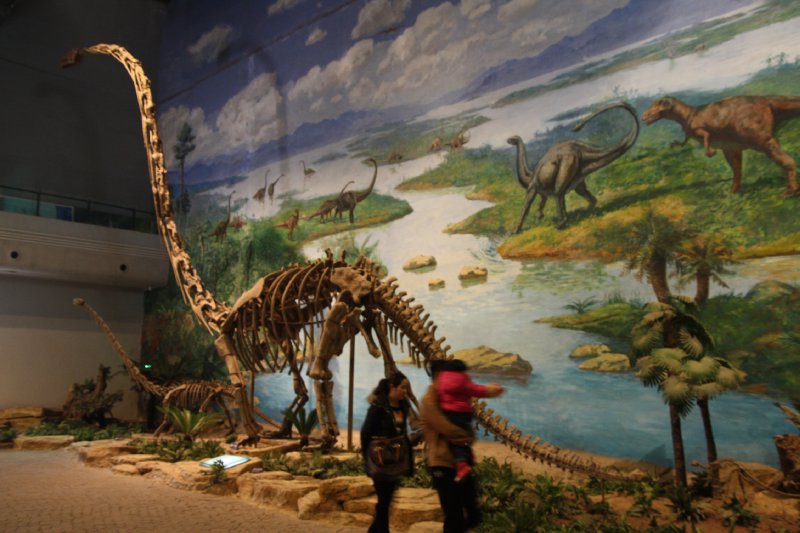 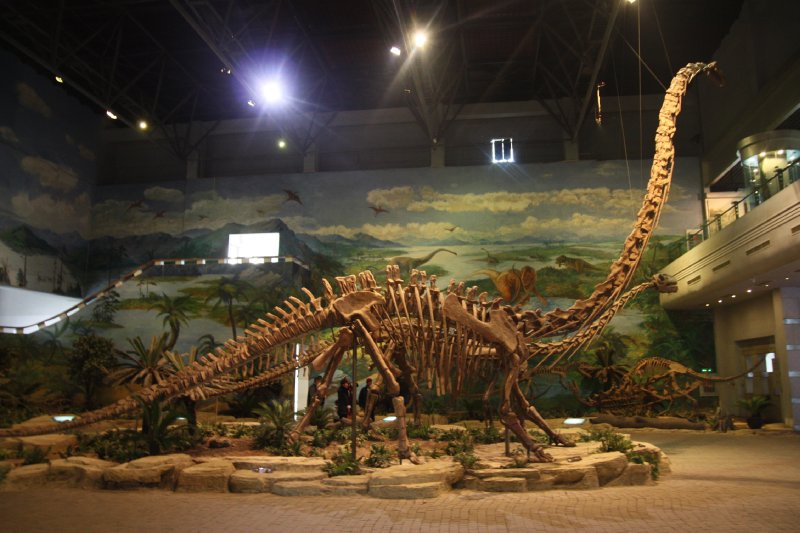 Then, at the other end of the scale, you have this 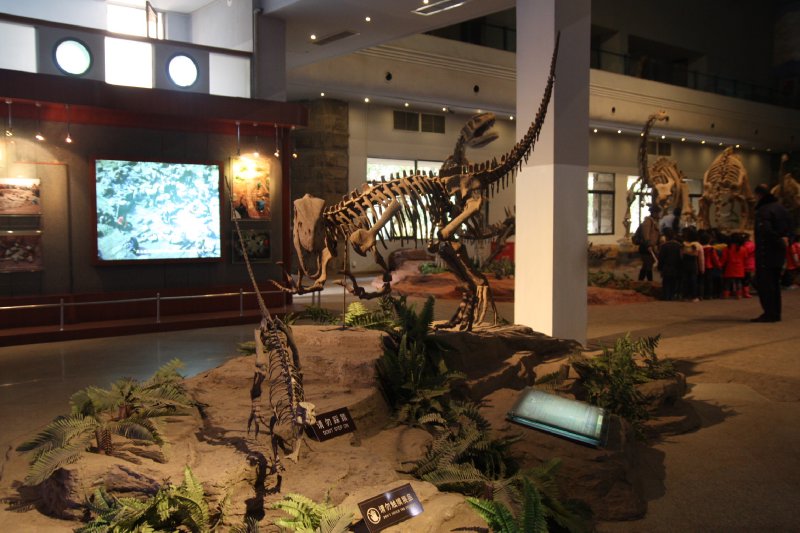 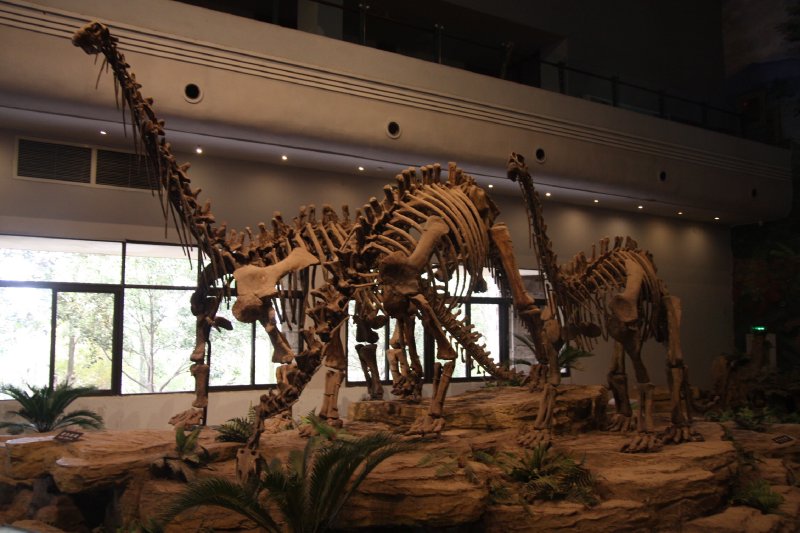 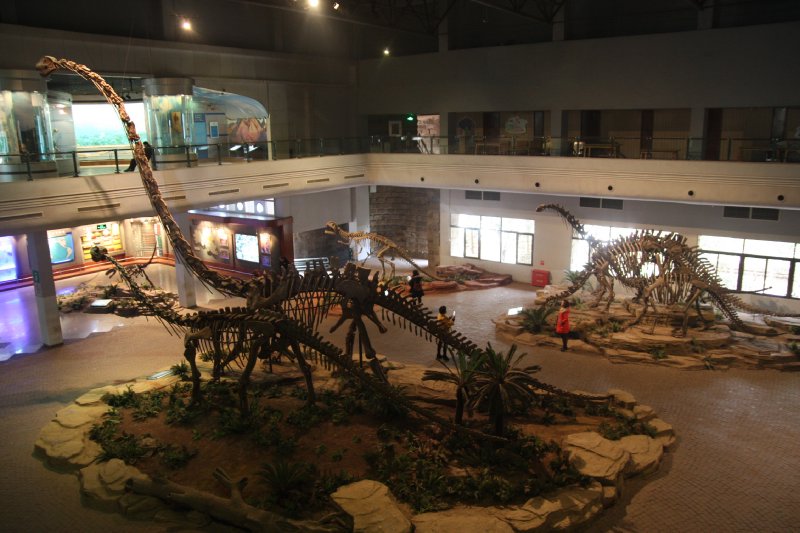 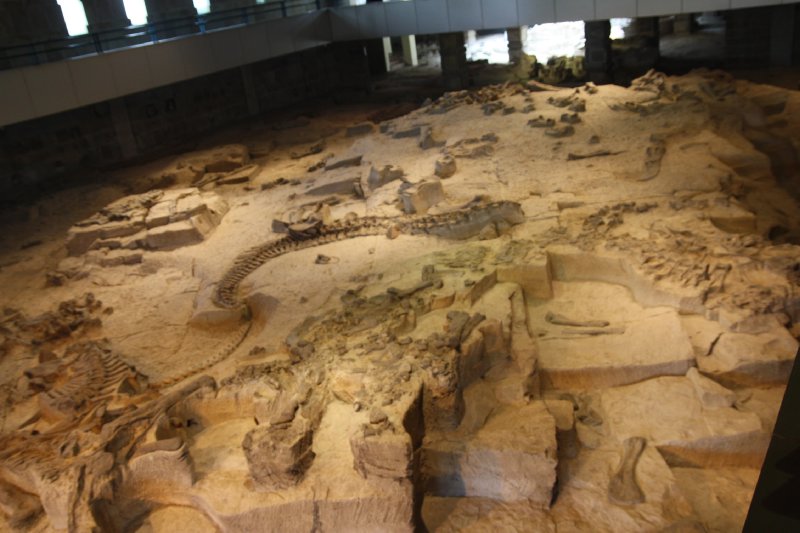 Now, Zigong's other claim to fame is for its salt (there was something about a particular tree but I paid no attention). According to Chinese tradition, salt is incredibly important for one's health (including mental and spiritual) and for a balanced life: they have been sourcing salt for around 8,000 years - initially by evaporating lakes, then the ocean but then they found underground salt. The first technique was a bit clumsy, just your normal well and a bucket, but then they developed something called percussion drilling. None of my explorations in Zigong left me with a clear idea of what that is, but the internet has come to the rescue - essentially the twisting of the drill bit is aided by having the dril bit pound the rock or earth in order to assist its progress.

It is said that the best salt comes from Sichuan and the best in Sichuan comes from Zigong (I actually tried to buy some, but could only find bath salts (but maybe that was its traditional use)). There is still a functioning well, the Sanghai well, in Zigong - when it was first dug, at about 1,000 metres, it was the deepest well in the world. I was hoping to find it but came across it accidentally - the bus from the dinosaur museum stopped outside. Unfortunately, it was actually closed for renovation while I was there, so I never got to see it in action. There are four main components to the saltwell - the derrick which houses the drill bit, the buffalo drive unit, the well from which the salt brine is extracted and then the area where the brine is boiled in order to extract the salt. In a nice piece of luck, they also discovered natural gas while looking for salt: that is used to burn off the brine. The equipment at Sanghai all looks as it is: something developed hundreds of years ago. 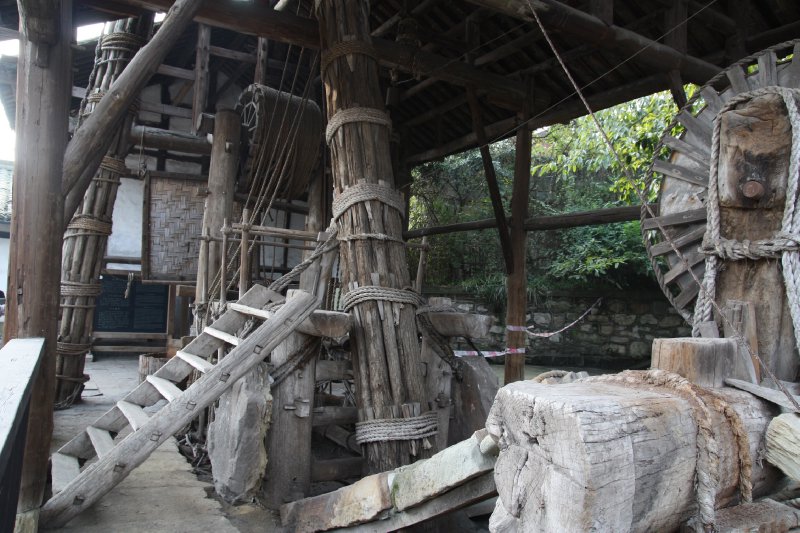 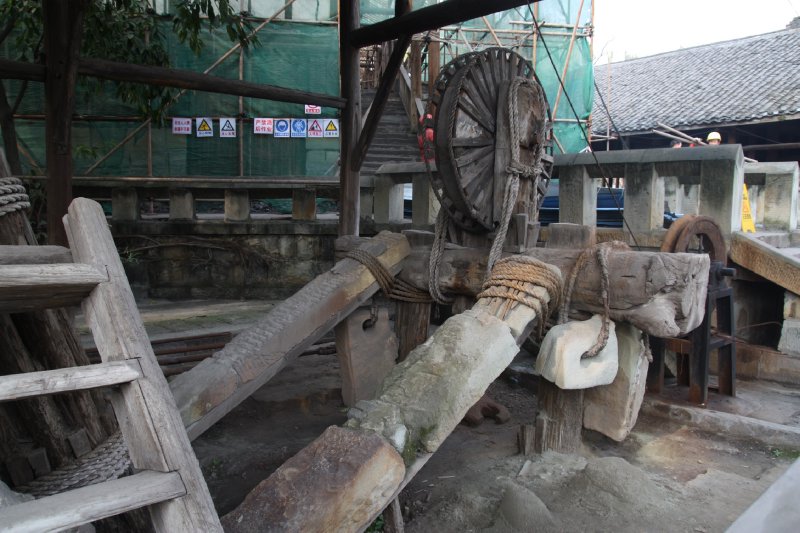 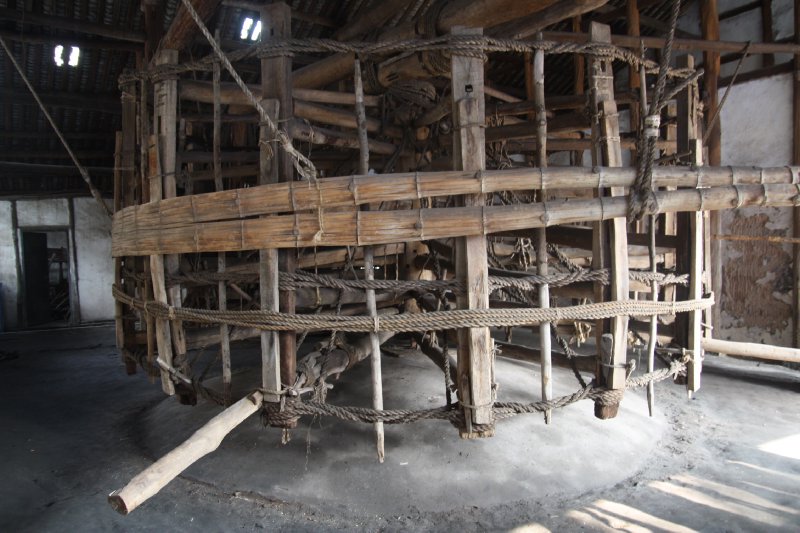 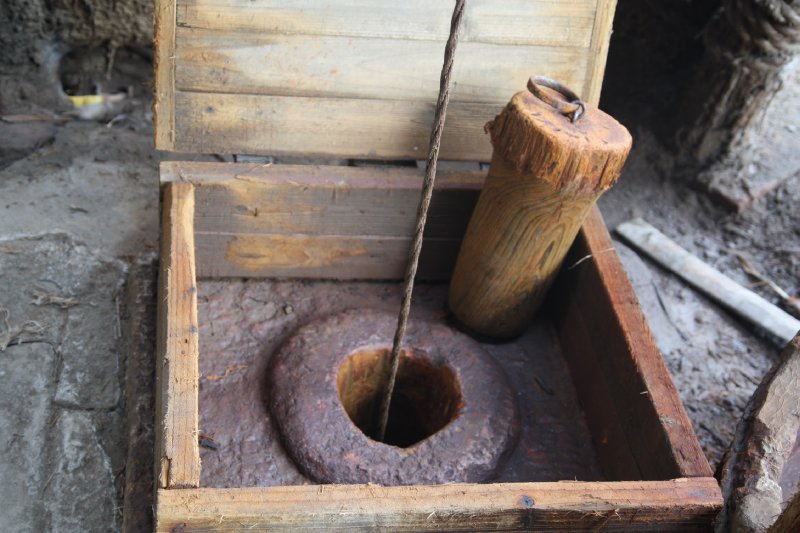 There were some engravings on the wall to illustrate saltmining here, which I did find a little helpful 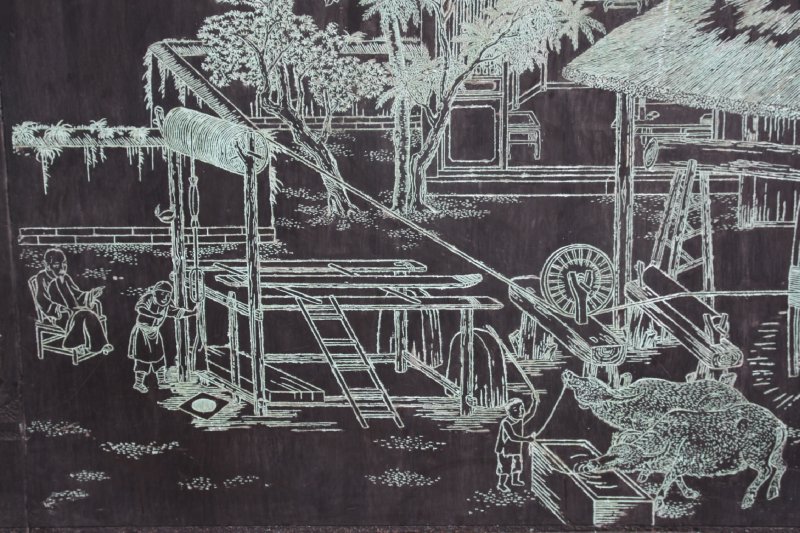 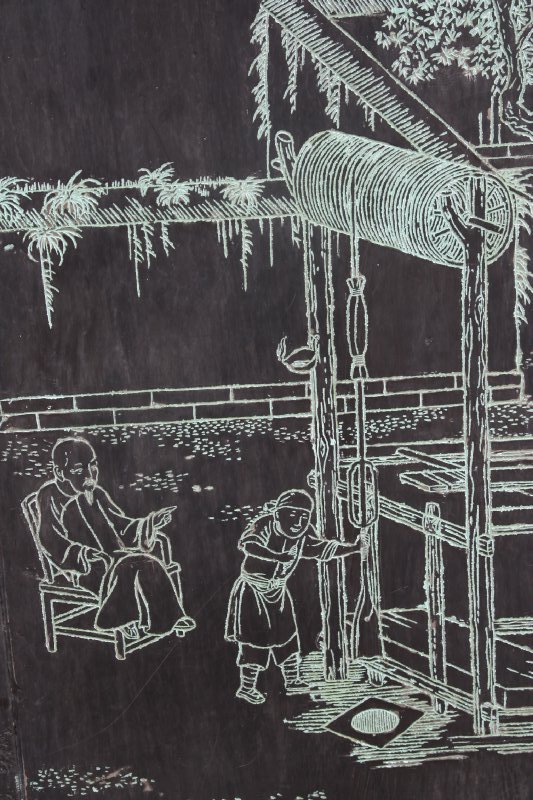 In town, there is also the official Zigong Salt Industry History Museum, which told the story of salt and its various methods of extraction, noting that the 20th century had mechanised this process dramatically, so that places like Sanghai are now of historical interest only. The museum is in an old guildhouse 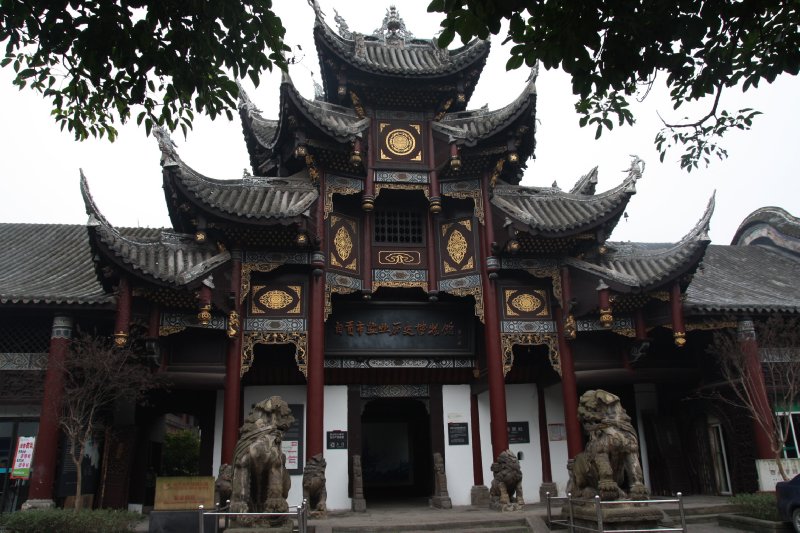 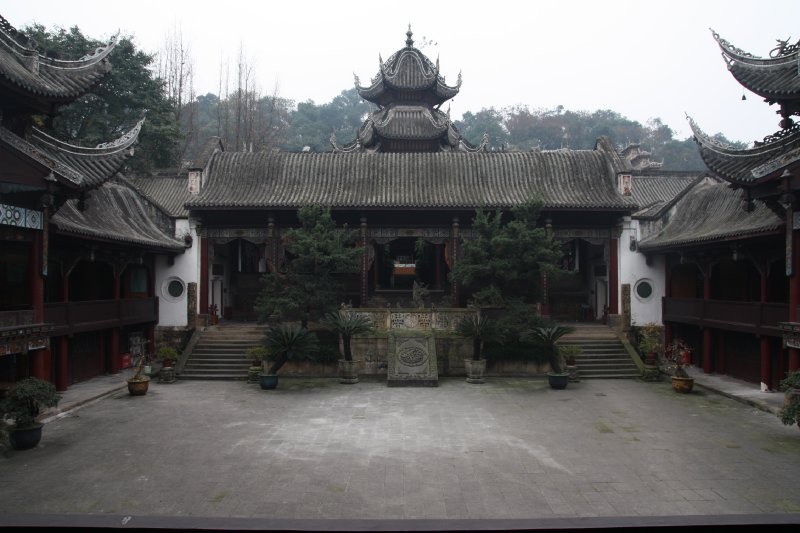 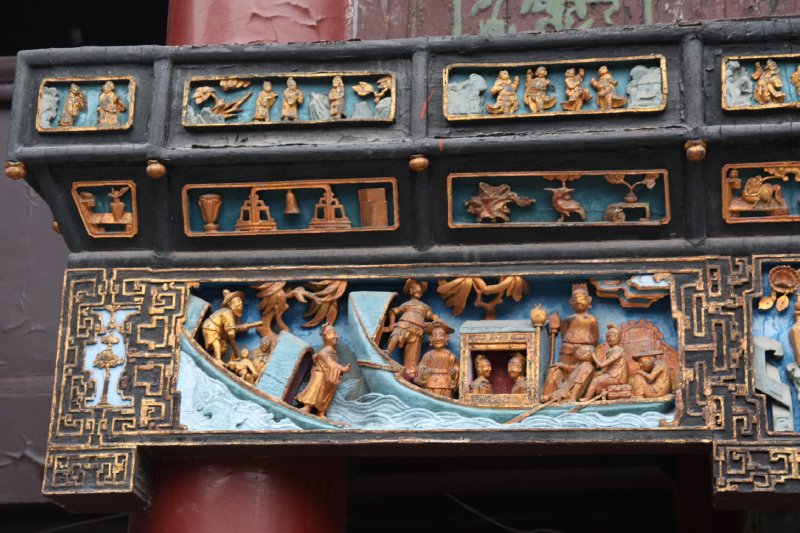 so I was glad to have the chance to properly nose about the building as much as the museum, which was essentially a bunch of artifacts and a couple of models - a salt well and a more modern salt factory. 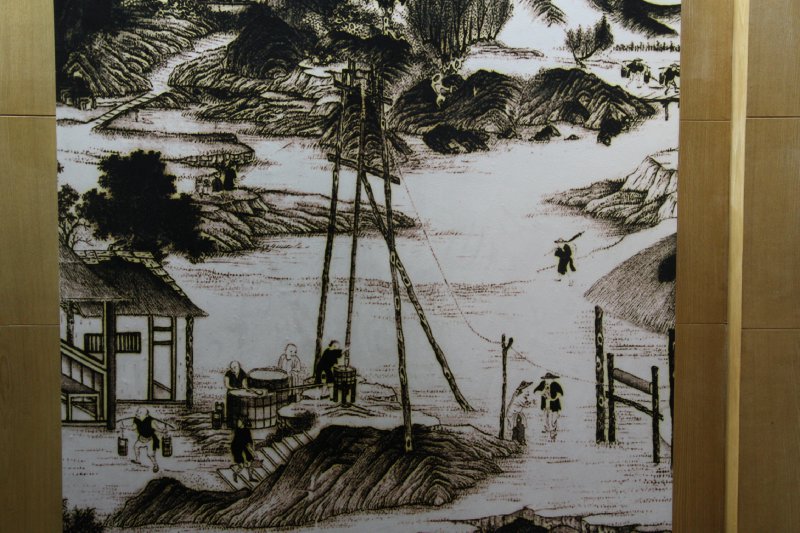 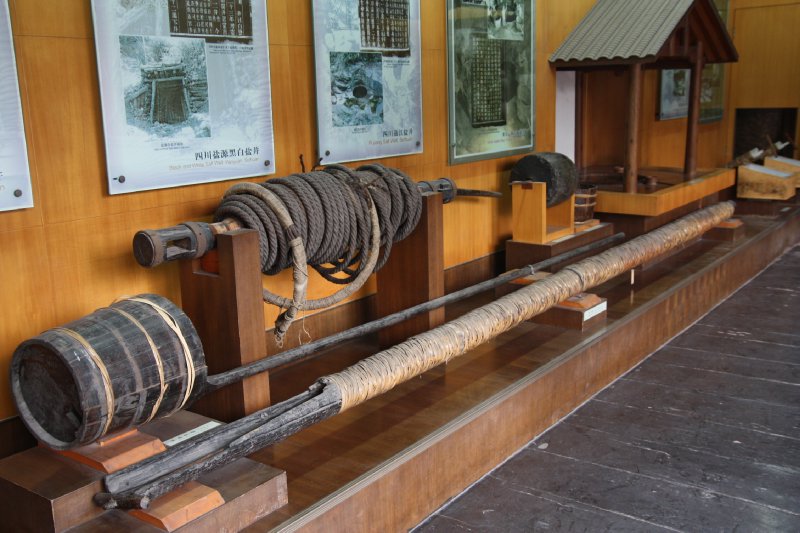 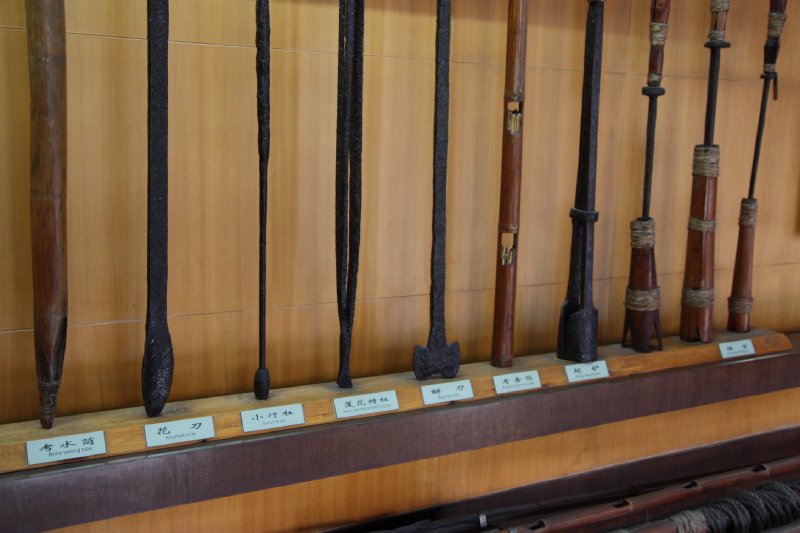 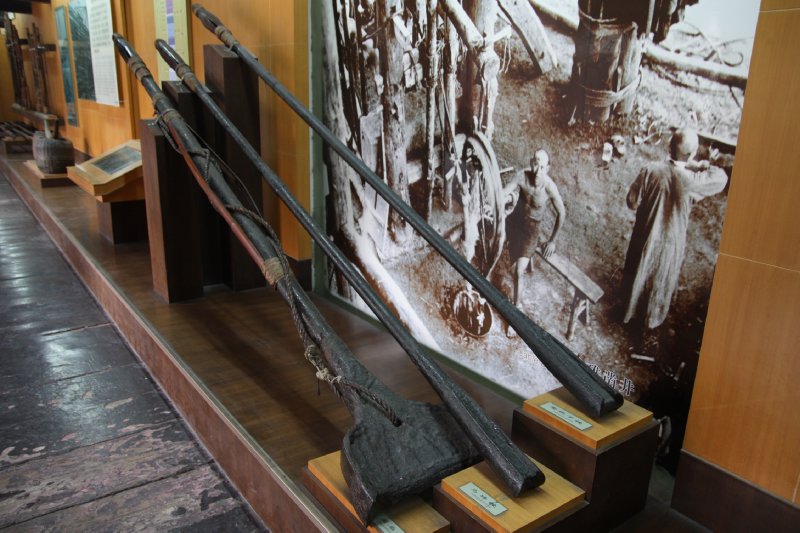 I had an evening train to catch, so after wandering around the museum area and another look at Zigong town, I plonked myself down in one of the teahouses and read - for a mere 6 yuan, they brought me a thermos of hot water and tea leaves and left me to it (unlike what happened in a fancy tea place at the dinosaur museum - they brought me a list of teas (in Chinese) but I could not work out what to order so went away empty-handed).

Posted by NZBarry 20:26 Archived in China