Like I said, Kunming was not all bad. After I was settled into the hostel, I went for a walk into the downtown area, because (a) I needed a shop for a passport photo and (b) I was hungry. I found several wedding and fashion photographers, but don't think they were quite right for the job (later on, with some help from the hostel, I found a bloke on a back street who was very punctilious and charged $4). As for the food, I was spoilt for choice - in common with every major Chinese city I've been in, the centre was dominated by malls, but they tend to have lines of proper restaurants on their rooftops - I found a Japanese teppanyaki place and pigged out on lamb, fish and chili green beans (called cowpeas on the menu). On my second day, I ended with another enjoyable food experience, although of a rather different character. Not far from my hostel, there is a food street - for a couple of blocks, most of the shops sell food (although there were quite a few clothing places) and the footpath turned into a bit of a night market. The most highly rated place on tripadvisor to eat in Kunming was here - oddly enough, it sold no Chinese food at all, but it was a very relaxed bar cafe, the sort of thing that would not have been out of place on the hippie trail. So, I went with the flow and had whiskey and a burger.

On the Monday, I had successfully found the Vietnamese Consulate (rather difficult according to everything I saw on the internet, but I had no trouble, so have now corrected the internet): their instructions were very specific - pick up the passport between 5:00 and 5:30 on Wednesday. I ended up having quite a marvellous Wednesday in Kunming, taking the day to walk to the Consulate. First, I went north, to the North Railway Station and Yunnan Railway Museum, only to find both closed in 2011 because of the impending metro (which does look imminent, as they were doing street refurbishment when I was there) 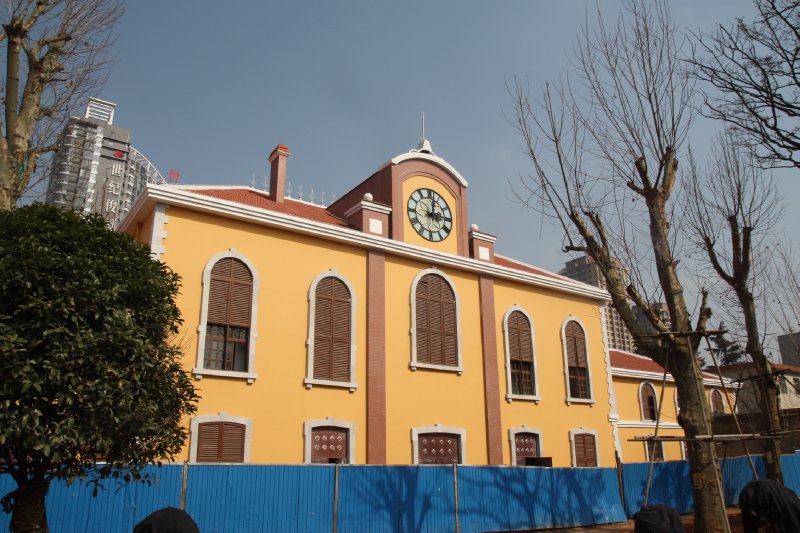 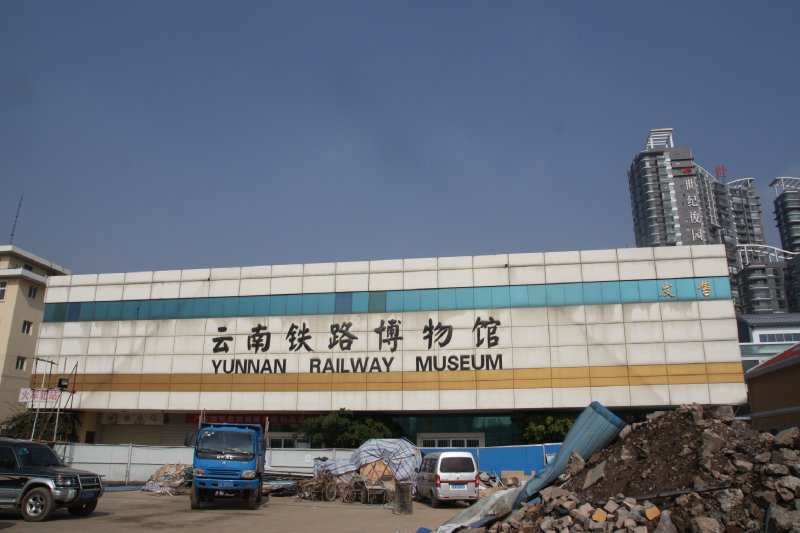 A sign pointed to a locomotive shed I could inspect, but it looked like the site of that shed has had a big now building erected on it - when I tried to go further, I encountered a rather concerned security guard who could neither tell me where the locomotive shed was nor let me proceed any further. So, a bit of a backtrack, almost to where I had started, to visit the Yunnan University, which doesn't look like much from the outside 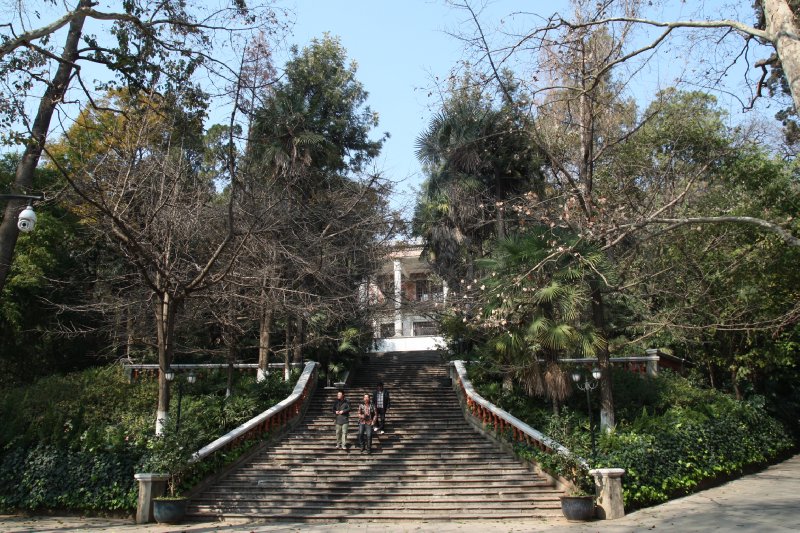 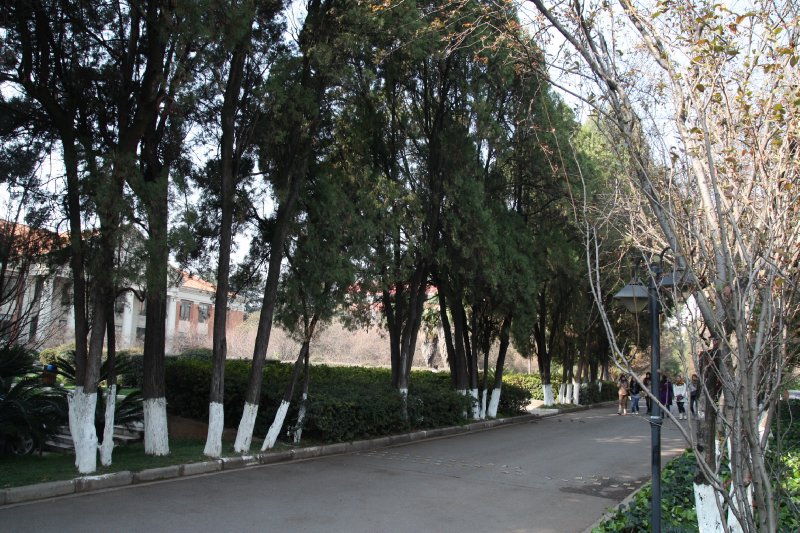 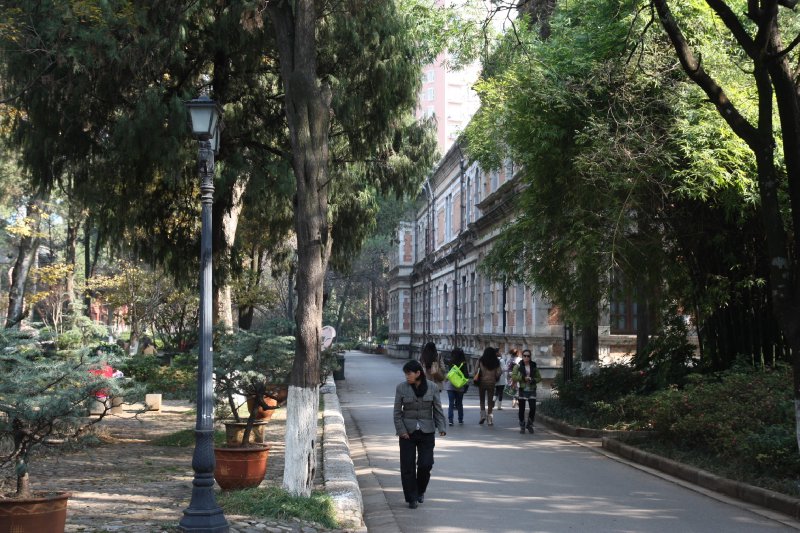 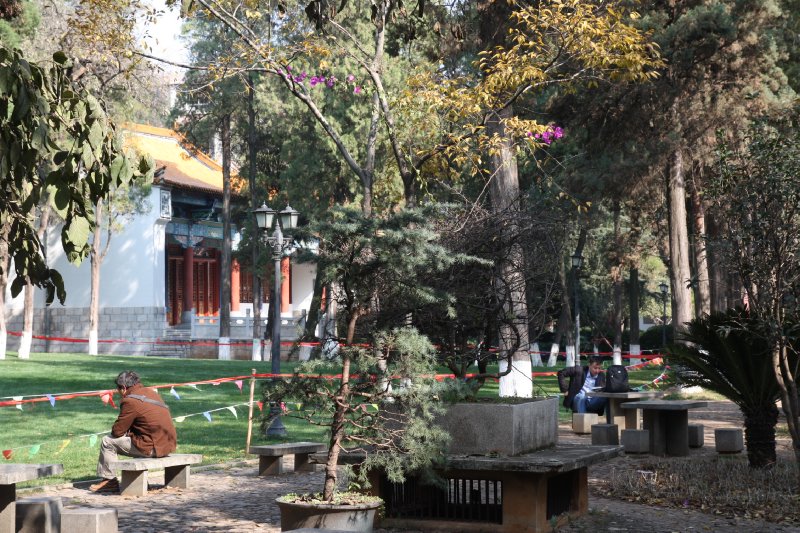 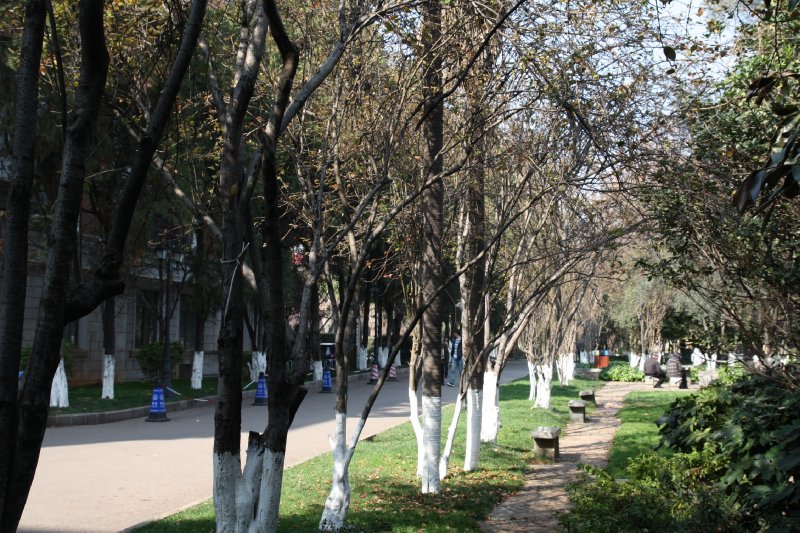 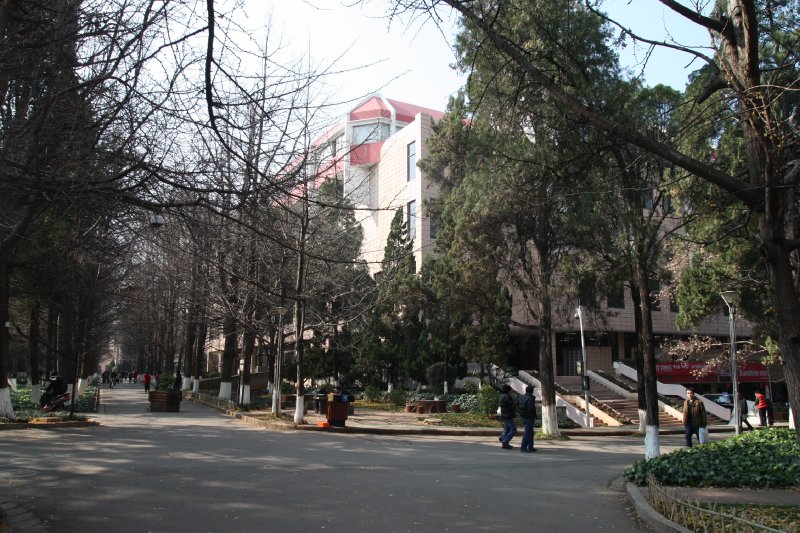 The buiding in the last picture is the library: I wanted to go in but it is card access only. So I did the next best thing, went to the Sunrise Cafe under the library and had a beer and some lunch. The University fronts on to the Green Lake 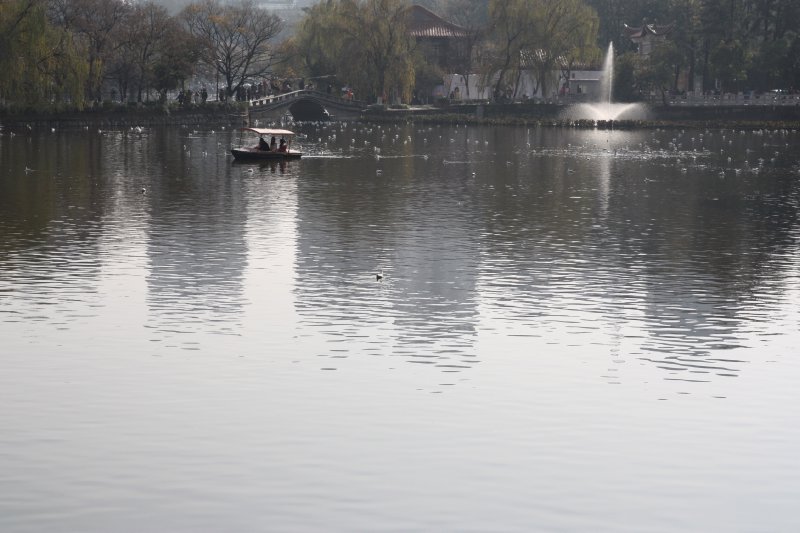 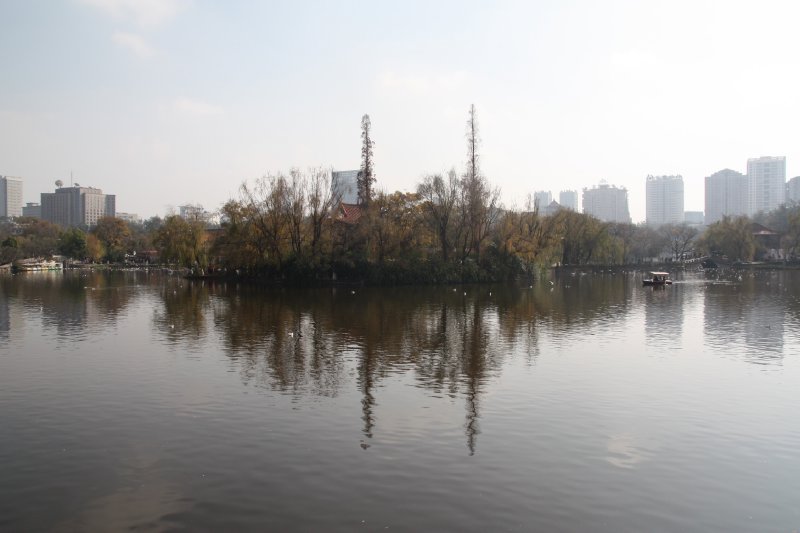 - I took a very slow meander down its East side, enjoying the musicians at work and watching all the seagulls congregated on the lake. I actually walked around this lake a couple of times as it was very close to the hostel - I am not sure why, but every so often all of the birds would take flight all at once: an awesome but slightly scary sight. 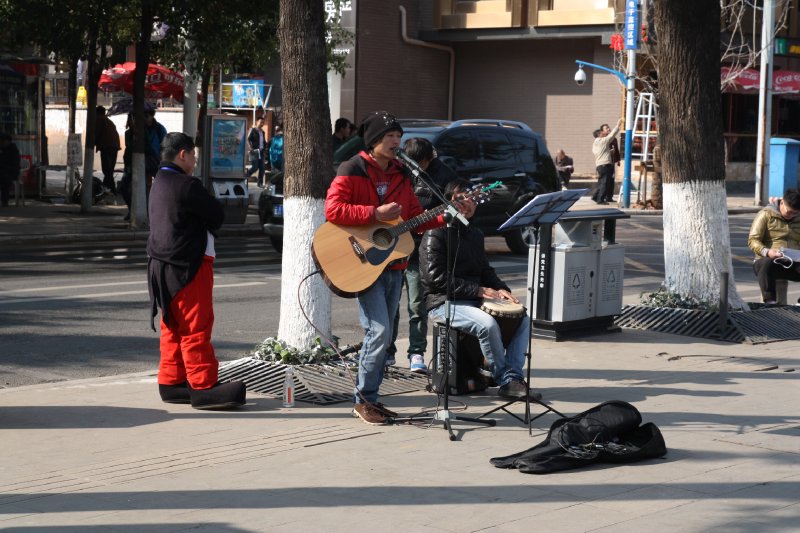 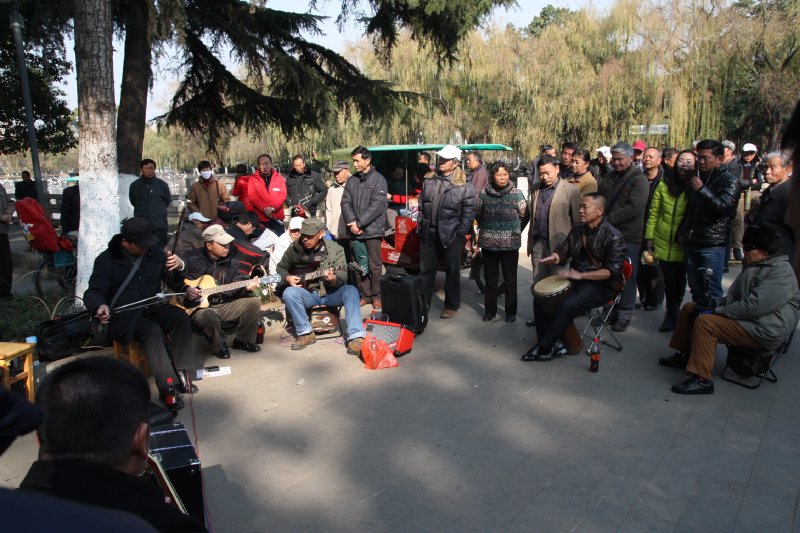 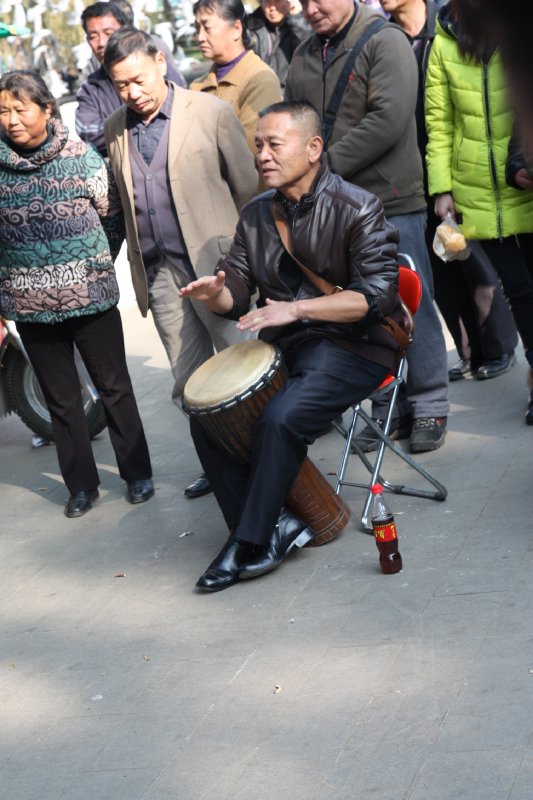 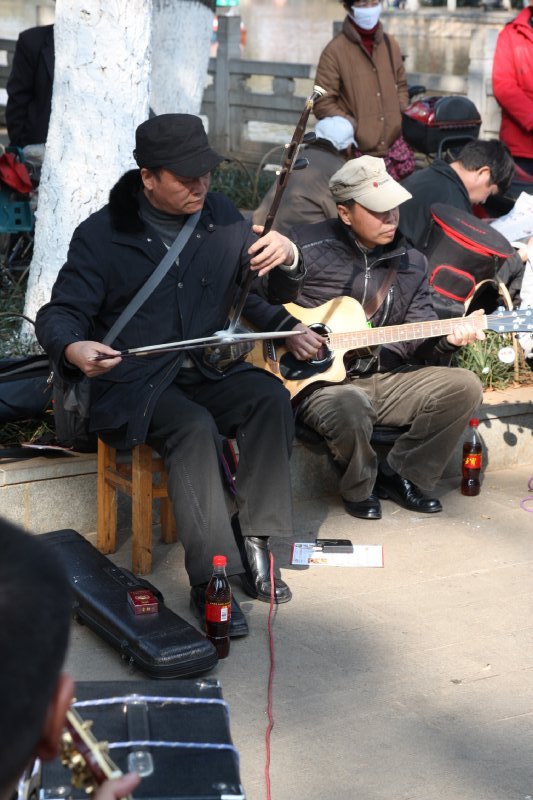 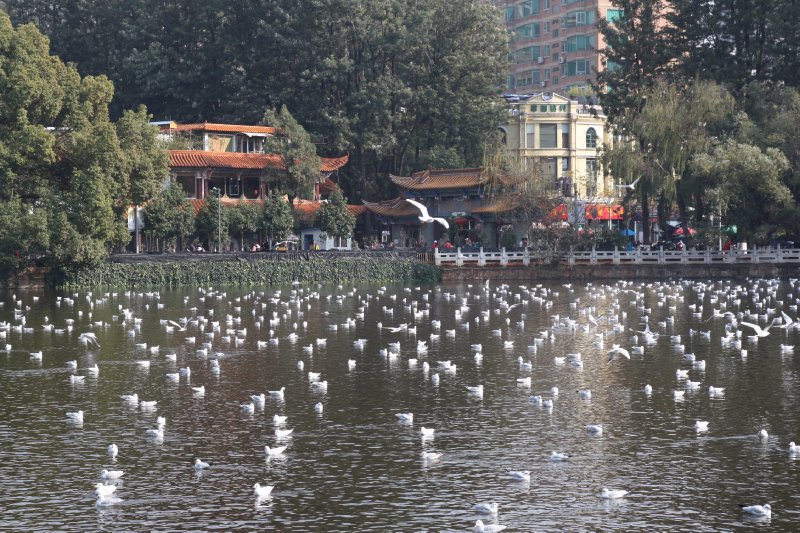 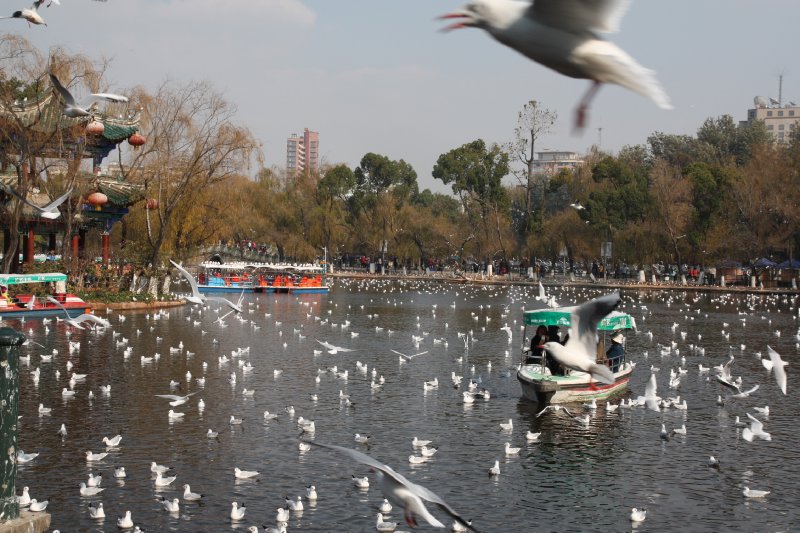 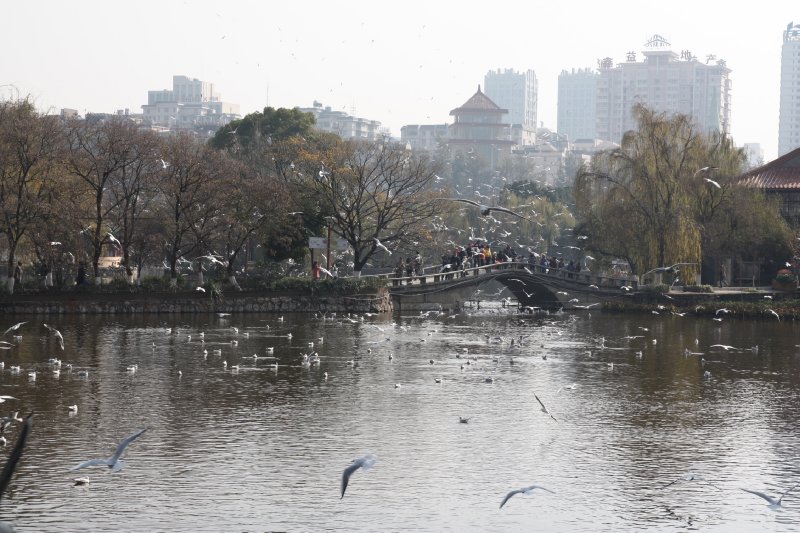 I'd walked past a building across the road from the lake a couple of times, even walked in and had a look, without having much of an idea of what it was. The layout should have given me a clue - it is the 100 year old military barracks. There is actually an art gallery/photography exhibition but I didn't find it all that interesting plus there seemed to be huge tour groups of locals being shown through continuously, so I gave that a miss. 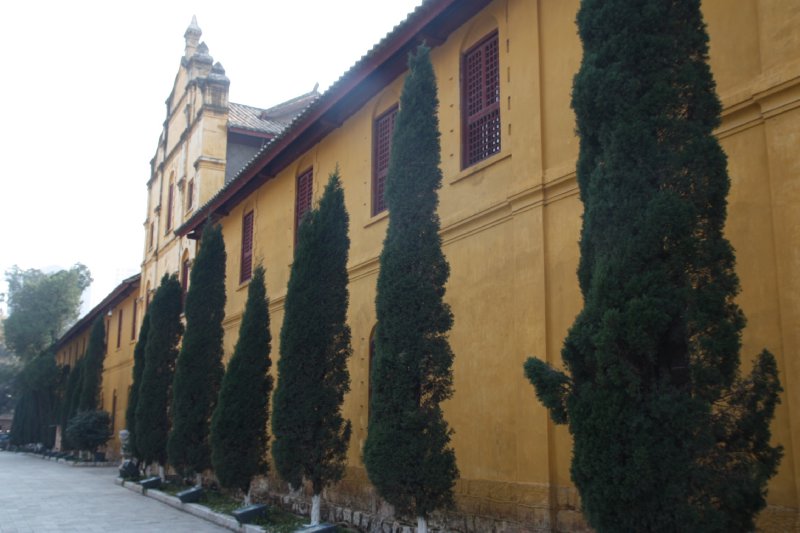 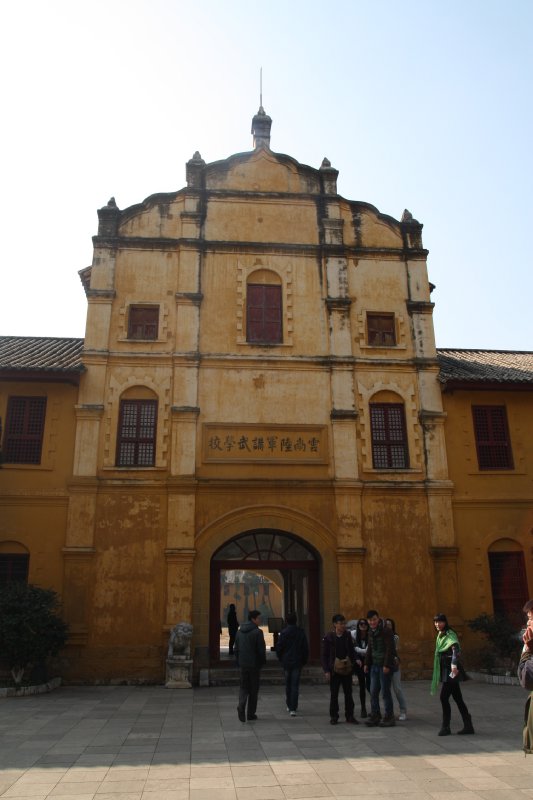 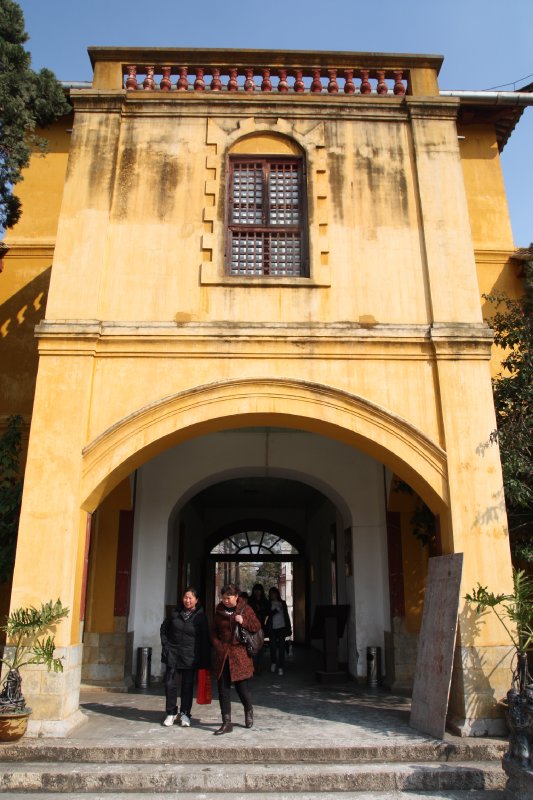 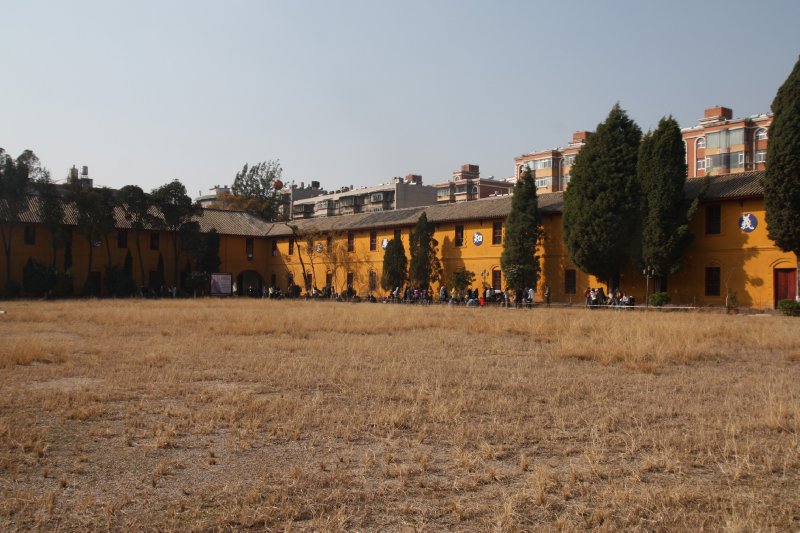 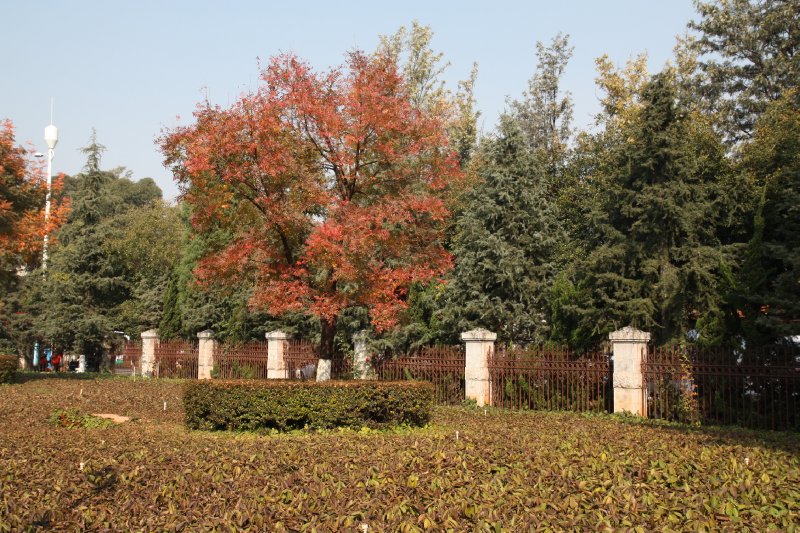 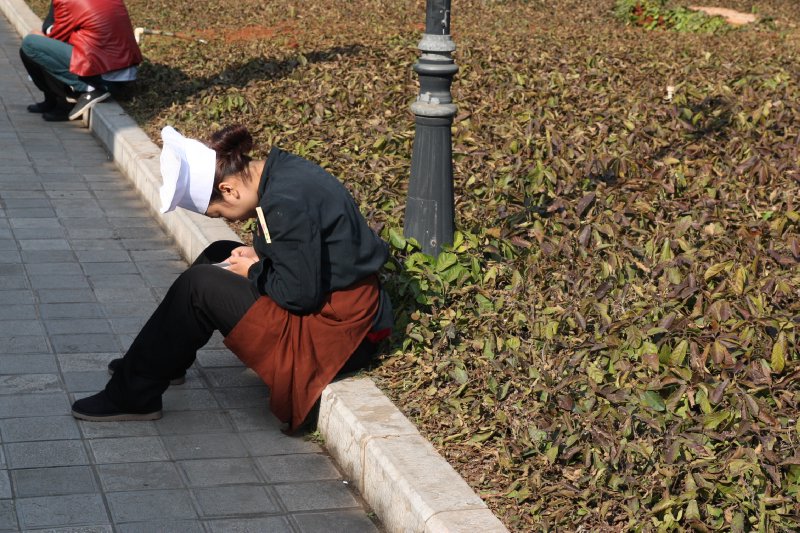 Next in my walk was the Provincial Library - only about the bottom six floors are used for public access library space but still, it is an impressive facility with many spaces set aside for study or quiet reading - completely unlike my local library, which has given up on those aspects of a library in favour of "the more people in the door the better". 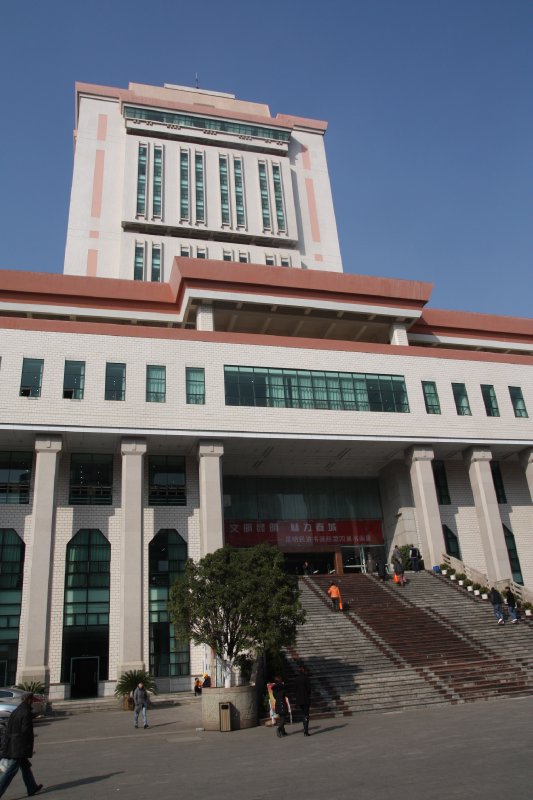 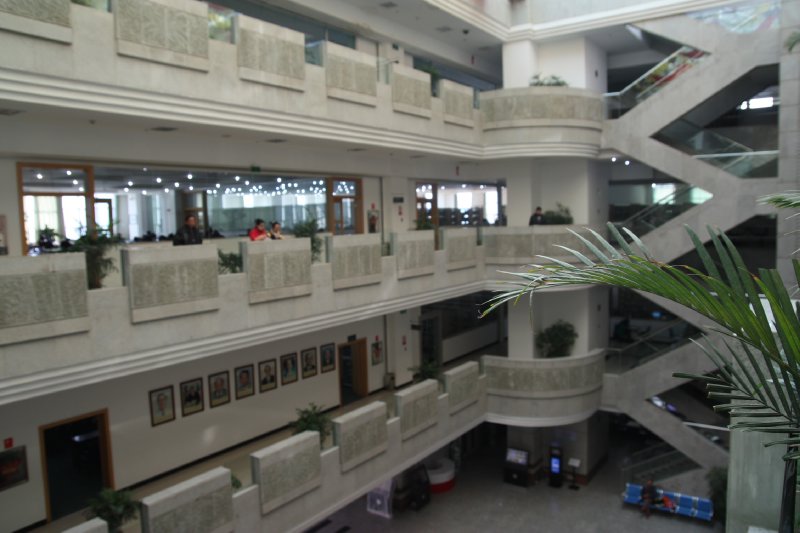 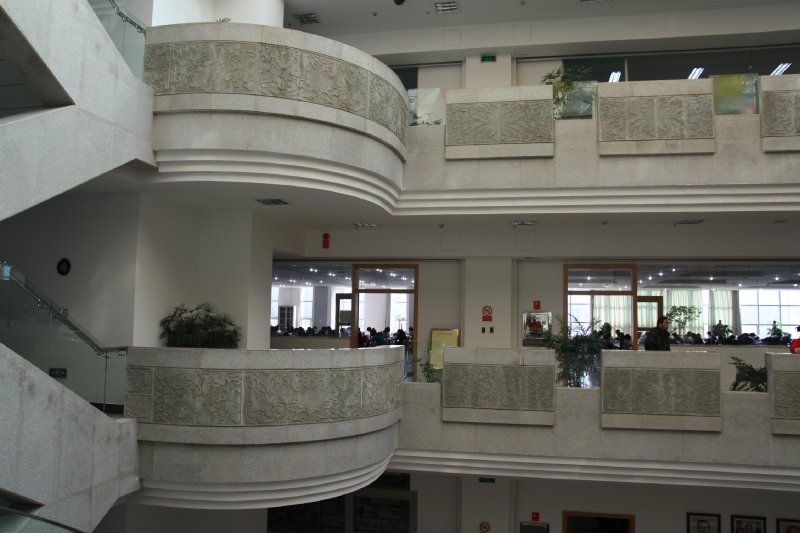 Finally, the Yunnan Museum, which had made a huge exhibition for calligraphy - one-take aphorisms by a particular master of the art. Again, there were lots of locals enjoying this but I don't have the background to appreciate it. I was more taken by the cute structures used to house up to about four policemen and women 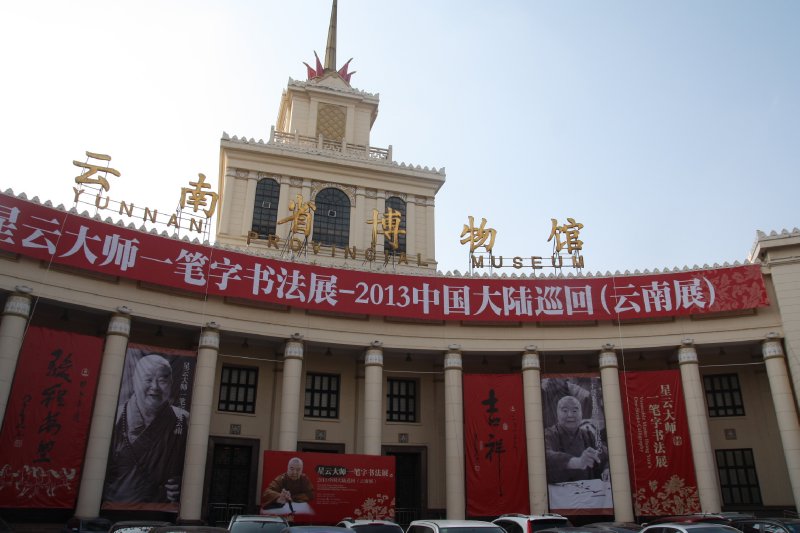 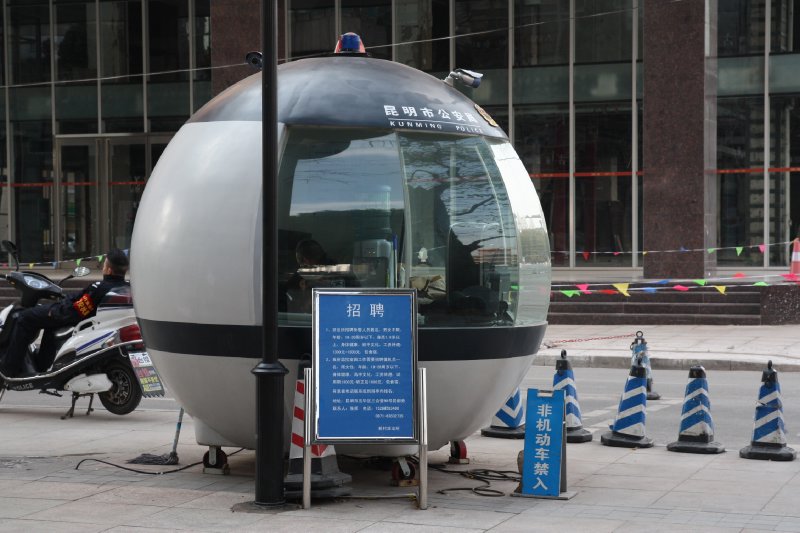 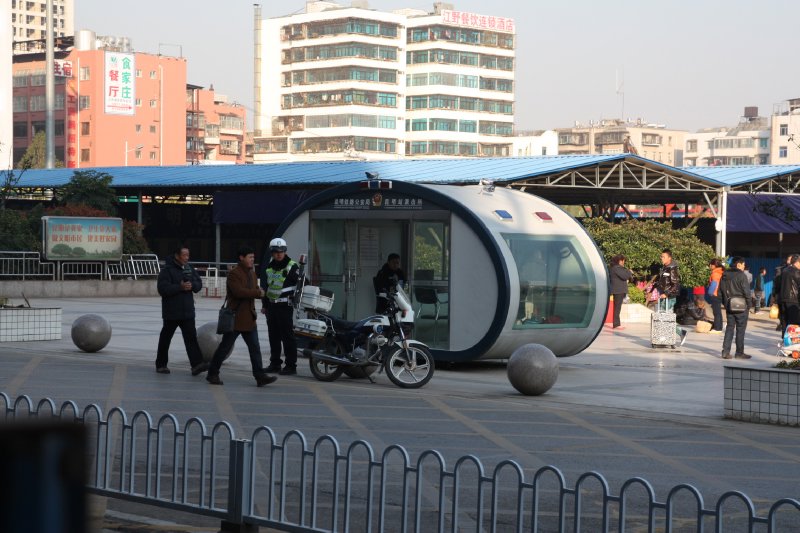 As I walked, I found a very small space occupied by old Kunming - wooden buildings with one or two floors, maybe a dozen in all. The rest of Kunming is very modern and lacking distinctive character, although there is a section where they are establishing a new ancient city (which made me think for some strange reason of starting a business "antique furniture - made to order"). I suppose with the massive shift in population (the Chinese Government is deliberately growing the population in these western cities) this sort of progress is inevitable but, still, it would have been nice to see some old China.

I was struck by the slow pace of life outside the CBD - every street corner had its collection of (mainly) blokes lounging on their scooters, doing what seemed to be nothing, not even waiting, just hanging. People dawdled up the streets - one woman was knitting as she dawdled, but the dawdling became so slow she ended up just stood there, in the middle of the footpath, knitting contentedly.

BTW - I accomplished my mission, arriving at the Vietnamese Consulate at 5:10. As soon as I had retreived my passport, I took full advantage of it my buying train tickets out of there and booking myself into a warm hotel for the night.

Posted by NZBarry 07:25 Archived in China