This is a journey of roughly 1,000 kilometres, which I decided to do in one rather less than seamless hit: it took me almost preciesly 48 hours! It started well: because a hard sleeper is no softer than a soft sleeper, I went for the hard sleeper back to Kunming. I shared the six berth space with a young couple from near Beijing, just out here for a week's holoday, and a cluster of middle-aged guys. As soon as they were on the train, they started to party, divesting the train attendant of all the beer she had to sell, along with large quantities of noodles and tasty looking vacuum-packed chicken legs. They were easily amused: the guard raised a prolonged laugh from them simply by asking me "how do you do" and another when he said at the end "have a good day". Luckily lights out on the train meant they moved their party away from my bed.

Arrival at Kunming was at the inhospitable hour of 5:00 a.m. and I knew the waiting room would not be heated, so opted for one of the 24 hour restaurants and a rather potent breakfast of champions: spicey (ie intense chili and Sichuan peppercorn) beef noodle soup. 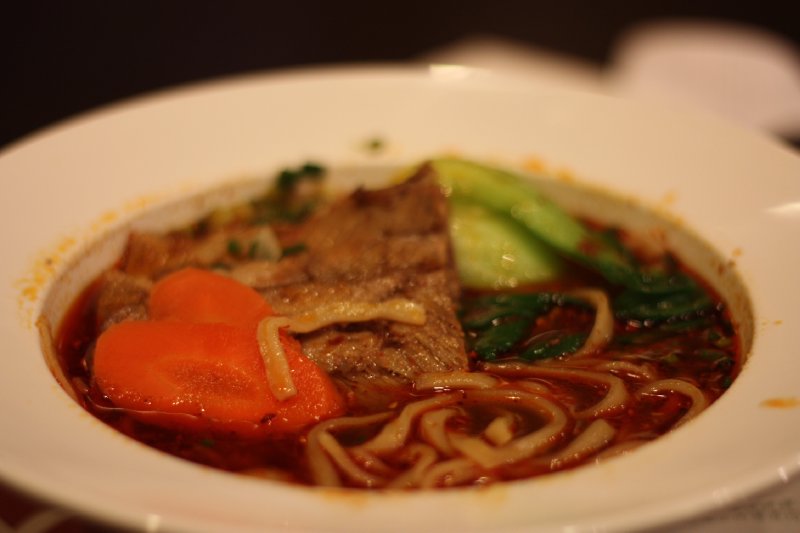 I could have bussed down to the Vietnamese border but in some circles, admittedly rather small and obscure ones, the Kunming to Hekou narrow gauge railway (built by the French in 1904 - 1910) has legendary status (it actually runs all the way to Haiphong, near Hanoi - when it was built, it cut the travelling time from 28 days to little more than one). Last time I was in Hanoi, I seriously considered coming up this line but, what with the need for a visa and me being short on time, it all became a bit complicated. That's a bit sad, really, because not long after, bits of the line on the Chinese side were wiped out by landslides, and they closed it. For ever. But they are building a new one, and have the first two thirds open, and so I caught a hard seat train down to a place called Mengzi - catching glimpses of the rather forlon, rusted remains of the old line. I read a blog by a fellow who had cycled through and he made Mengzi sound rather good, so I should really have stayed (would have if I had the benefit of hindsight) but I was on a mission: Vietnam today.

Things were a little haphazard in my planning at this point: the internet told me it was easy to get a bus south, but with no details, excapt that one fellow thought the bus left from near the old railway station (the new one is 17 km out of town). There was a big bunch of local buses waiting for the train, which were heading in to town - they all stopped at what looked like a rather random place to me, so I had to ask some locals where the bus station was: they conferred for quite some time before advising me that we were standing outside it (it looked more like a mall to me and had neither English signage nor buses to indicate its purpose). I was on a bus speeding down the expressway within about 20 minutes, and was able to appreciate the difficulties of running the railway line through here - the Red River has created a particularly rugged sort of gorge: the expressway just ignored all features of the landscape by having a large number of viaducts and tunnels, and so this part of the trip was over in about two hours. I had planned to walk to the border, but the bus stopped outside the centre of town and a lady with a taxi convinced me to pay her 10 yuan to drop me off at the immigration control office. After a last linger on Chinese soil, I went through and was in Vietnam.

The change was immediately apparent - in China, no-one who talked to me seemed to have any sort of agenda, were either helping me or just wanted to talk. In Vietnam, almost everyone had an agenda: to sell (money, taxis, motorbikes) or to con. I wasn't even out of the Vietnamese Immigration building and some bloke is officiously telling me to go to a particular counter, which turned out to be a dodgy money changer. I have a low tolerance for this sort of thing, so it wasn't long before I was getting a bit grumpy. Then there is the change in language, in the script, in the economic situation (Vietnam is and looks poor compared to China): one welcome change was that I could now recognise most of the important local foods (Pho Bo, Pho Ga, Banh My and Bia). In one evening, I managed to indulge in all of them!

The plan was to catch the train to Hanoi, but I was thwarted. The station attendant had no tickets - but I was approached by a number of touts who could sell me one, including one fellow who was leaning against the counter. They wanted something like four times the going rate, which was still not a fortune, but I really had no wish to support this practice. My hotel seemed to think that going back at 8:00 in the morning might produce a different result but (a) the train left at 9:15, (b) the one day bus I could find left at 8:30 and (c) I really did not want to stay in Lao Cai longer than I had to. So, I caught the bus.

Now, I've been in lots of rumpety old buses in rugged terrain (old Tata buses in Assam or traversing Nepal; old Hyundai buses in Laos) and never had any problem. The bus produced for me in Lao Cai looked better than any of them and the road south, although it was extremely twisty, was at least sealed. But it was a sleeper bus (if I had known this, the touts or the waiting in Lao Cai would have been so much more attractive). For the most part, the bus is comprised of individual pods - three across and two levels. But at the back, it is more or less a sleeping platform, for five people, with two levels. The worst position is in either upper rear corner - not only because the movement of the bus is most pronounced here, but also because there is a big speaker box for the sound system straight above your head - so sitting up is impossible. This is where I was put, for a 350 km journey which google maps confidently said would take 5 hours: it took TWELVE! The only small good thing is that the sound system was never turned on. Here are some pictures of the road and the terrain through which it passed, for about the first 250 km 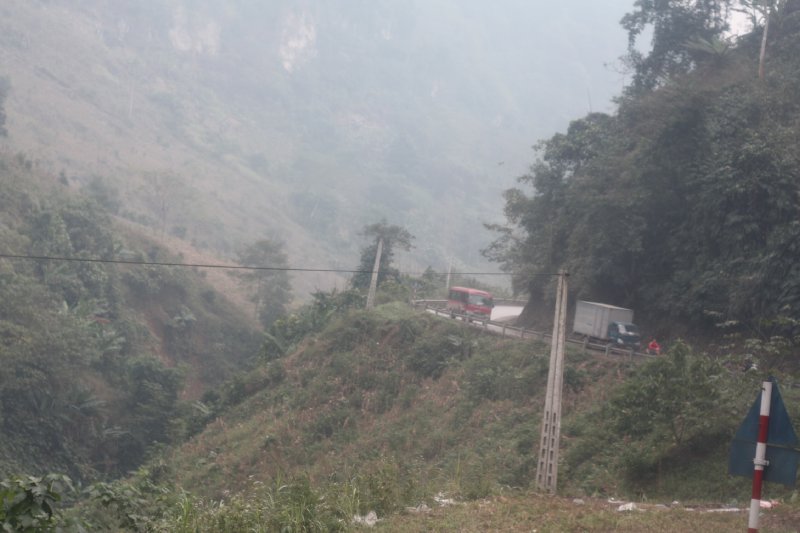 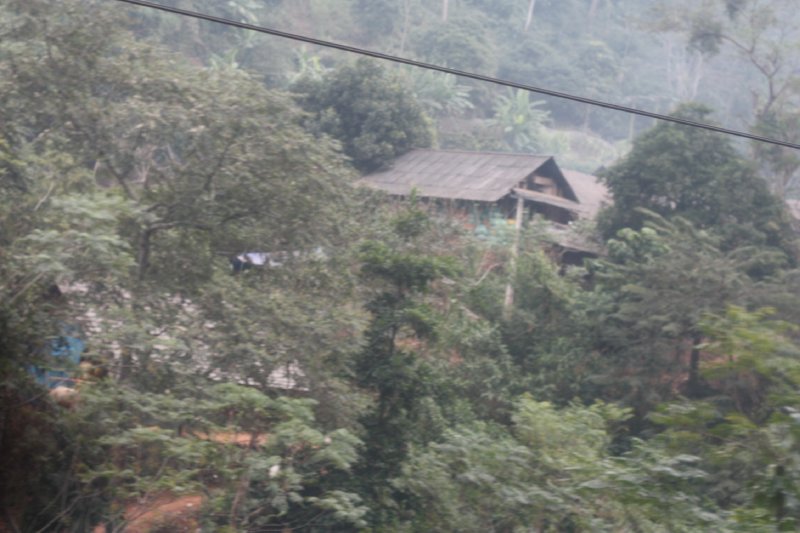 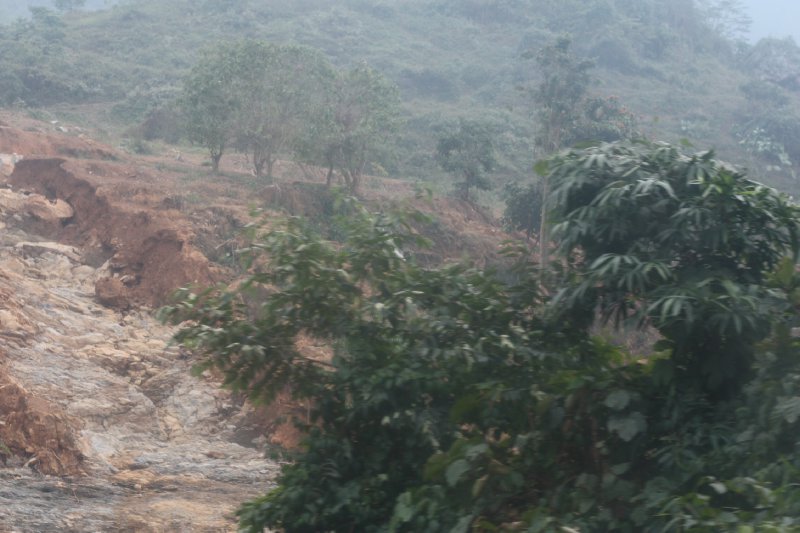 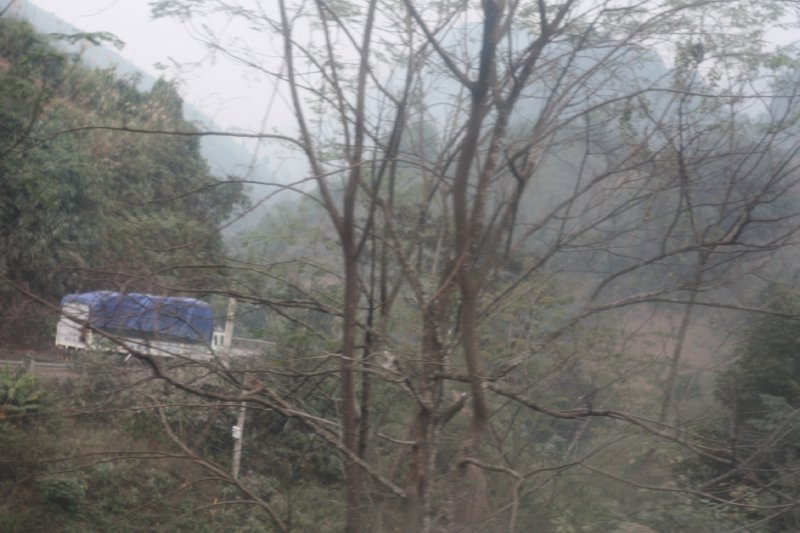 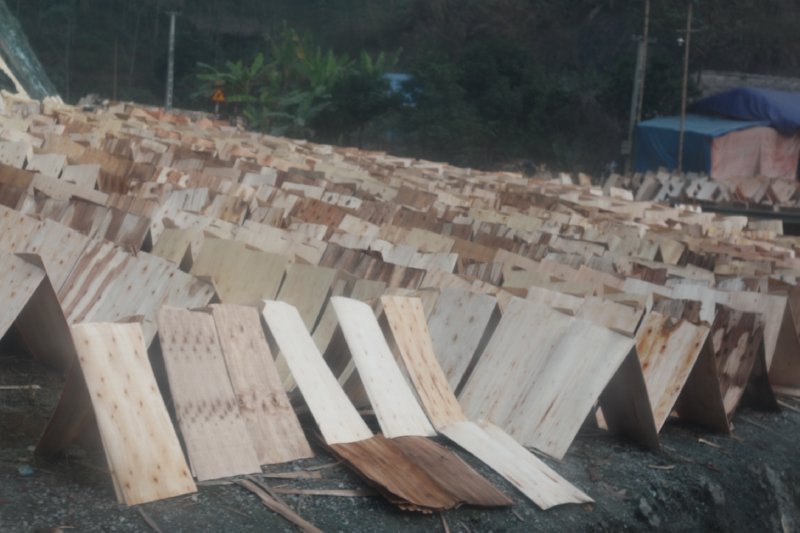 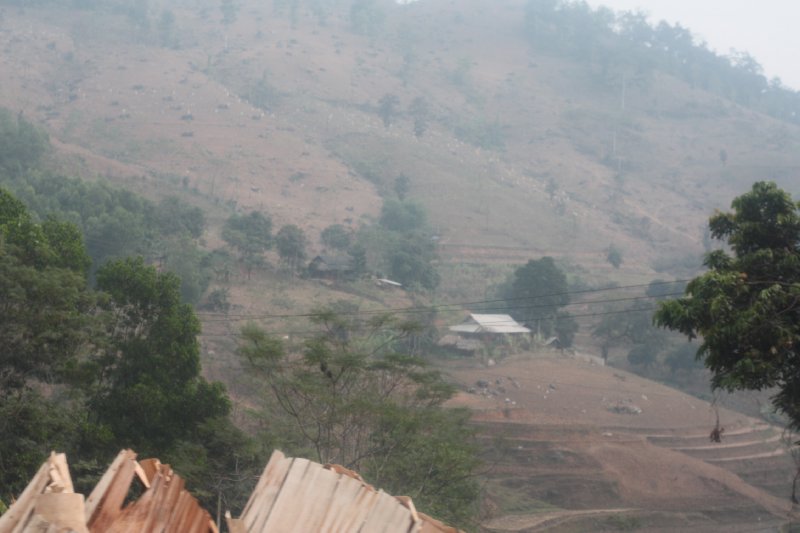 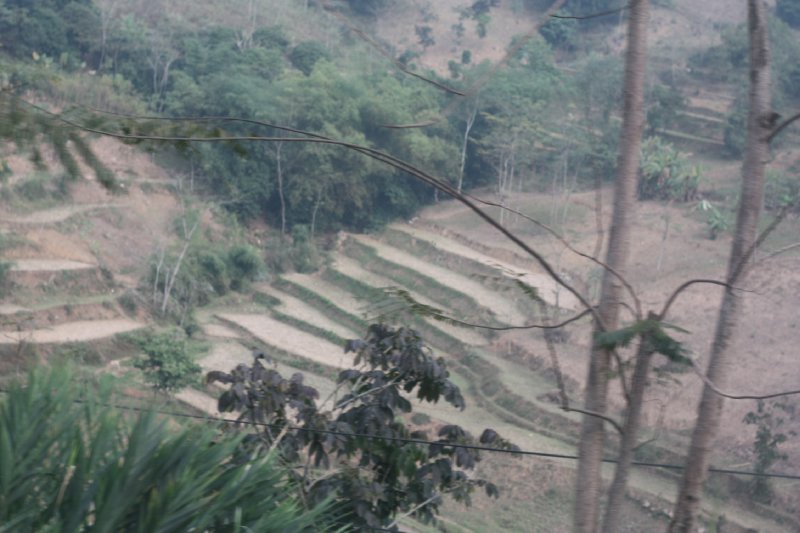 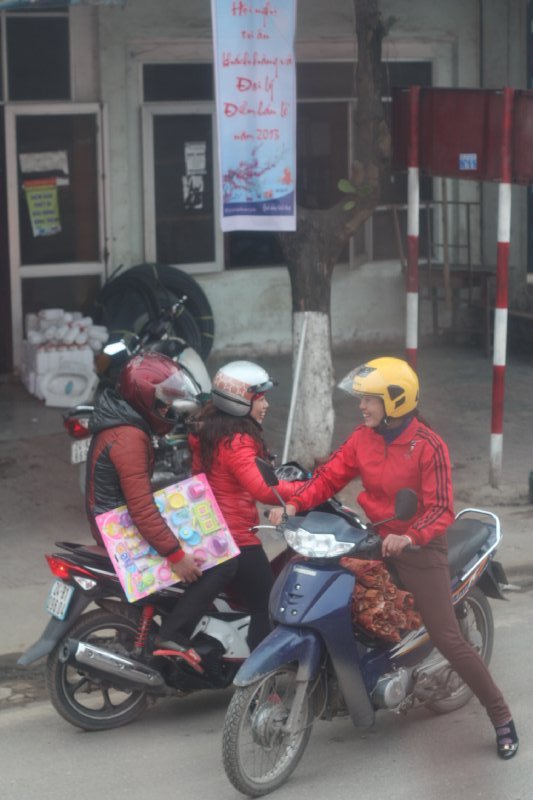 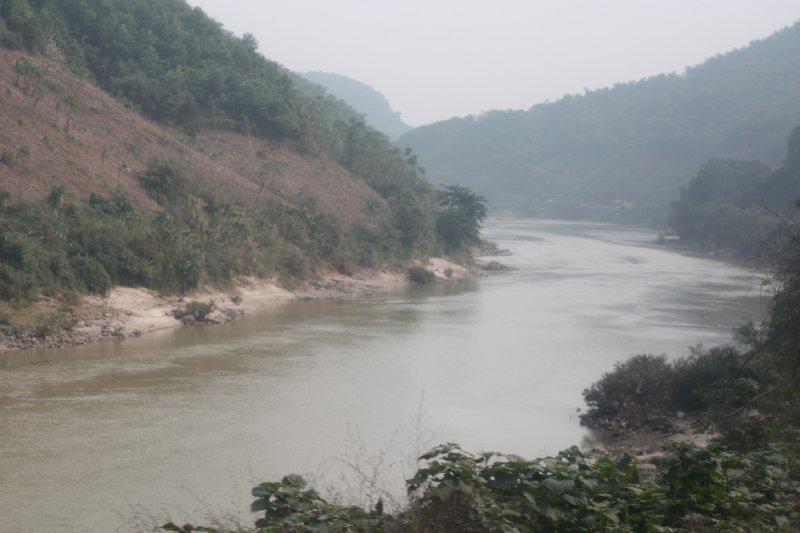 By about lunchtime, I was feeling sufficiently off-colour to think it was best not to eat anything. Oddly enough, I managed to make it through to where the road improved before I finally needed to find a bag, urgently. Not just once. This last bit was a nightmare, particularly when I had convinced myself that the town we were going through was so big it must be Hanoi and then I see it is still nearly another hundred k. Of course, we get to the bus station, and I am crowded by taxi and motorbike drivers, clamouring for my meagre bit of business. I'm not ready for this, am less than polite and sit in the bus station for quite a while before I am ready to go find a taxi and make my way to my hotel.

Posted by NZBarry 19:16 Archived in Vietnam