My trip around the National Art Gallery had me feeling a little overwhelmed, so I ducked out for refreshments before tackling the European Gallery, which is in a seperate wing of the former Palace. This, to be honest, did not occupy me for long; I recognised few of the artists and the selection of works seemed to cover pretty standard topics. They claimed around 3000 works - I was in and out in an hour or so, perfecting my "art gallery walk". I did like Breughel's Four Seasons, and particularly enjoyed Summer. Everyone is hard at work, harvesting and carrying on various agrararian activities, all except for this one fellow; he had a large pitcher of (I suspect) wine to his mouth, and he wasn't working for nobody!

Just past the Russian church, I'd spotted this extremely swanky looking restaurant with lots of poshly dressed people enjoying a late lunch; I decided to go in and lower the tone somewhat, and had myself a very nice cake with an average coffee, sitting beside a couple I am convinced was some sort of mafia bloke with his dame, they just had the look (we get good experience in Dunedin outing such people).

I decided I had to get a move on, because I was quite keen to see what destruction Ceauşescu had wrought on the city, and had only one more night in town. As I wandered down from Revolution Square, I noticed what seemed to be a fair number of good, serious bookshops – all closed for the holidays so I couldn’t go in and wander around. Not that it would have made any difference; all the books seemed to be in Romanian.

Ceauşescu is notorious for (among other things) tearing down a four kilometre long strip of fine buildings and turning it into an ugly monstrous monument to his own ego and to communism. Have to say, it seemed quite nice to me, far better than, say, most of Athens. There was an ice skating competition going on in Piata Unirii, with Bulgarian radio DJ’s sounding no less inane than their kiwi counterparts, but a good sized crowd was having a lot of fun. And the boulevard in from the Piata to the Parliament had been closed and set up as a street market. 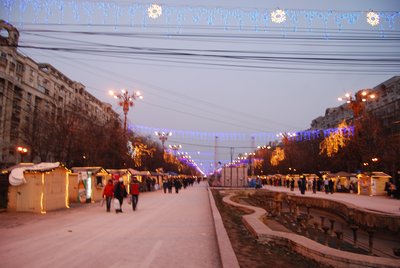 I was seduced by the smell of meat cooking on charcoal, and found a couple of jovial fellows cooking up some long, juicy sausages. I had to wash that down with a beer; curiously, after it came out of the fridge, it just got colder. I guess that’s why they list ice cream on the menus over here as a hot dish.

I’d been watching several stalls cook something that had me very curious. Basically, they rolled dough out in a strip, then spiraled it around something the diameter of a wine bottle, then cooked it, rotisserie style, over charcoal. When I discovered that they then rolled it in sugar, I had to have one. Other people I saw buy them put them in a bag and took them away, so I am not sure how they’re supposed to be eaten, maybe you stuff ice cream inside them or something. Me, I just chewed away at mine as I walked up the street. Enquiries have revealed that it is actually a Hungarian dish, called Kürtös Kalács (came in to Romania when it took over Transylvania from Hungary), and there is even a wee You-tube guide to making them.

His plan was to make this boulevard slightly bigger than the Champs Elysees. There's talk around about how terrible it is, but so long as you don't mind a lot of concrete, he could have done a lot worse:
[ 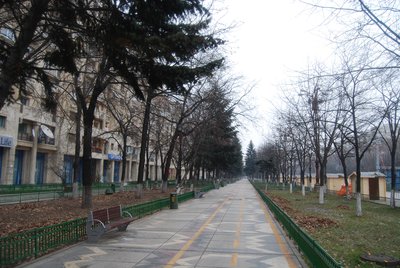 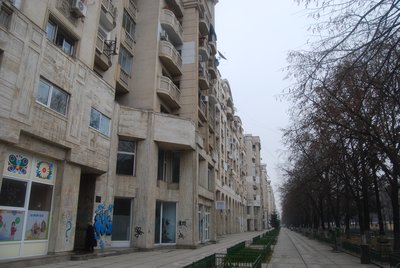 I do wonder though if he'd be disturbed that people might actually be having fun on his parade. Now the thing that people seem to really object to is Ceauşescu's palace, which after he was killed off and replaced by a more democratic form of government became the legislature (second biggest in the world [“it is even bigger than ours” said a couple of American guys in my hostel]), saying that it too is just a monument to his ego. But I quite like it. 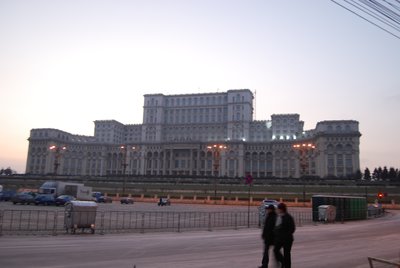 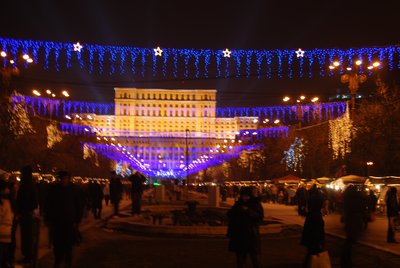 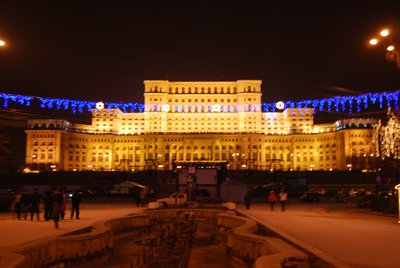 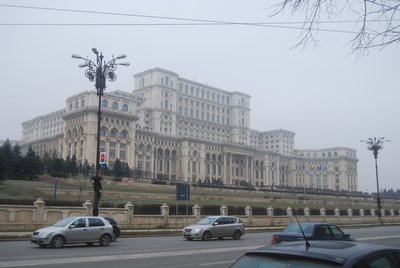 As if it wasn't big enough, he also had government offices built in a crescent to face the palace 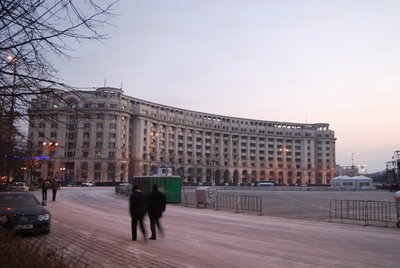 Directly beside it is the rather less well-tended Romanian Academy 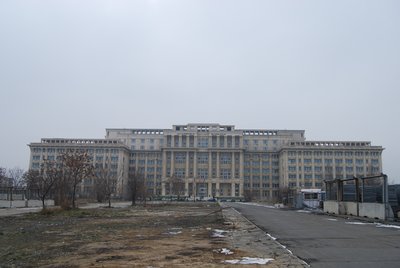 Three last random images as I went wandering towards the back of the palace from my hostel: 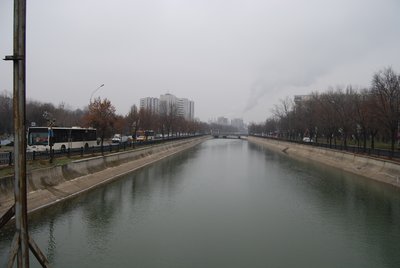 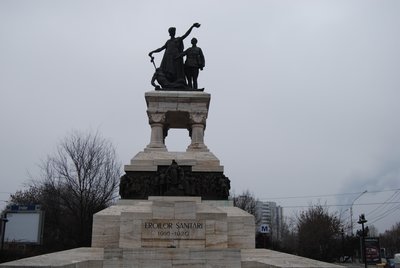 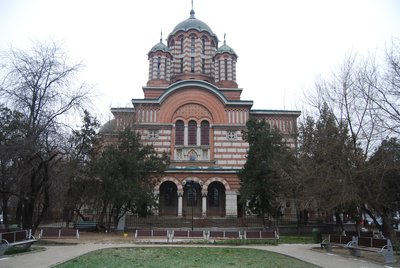 Posted by NZBarry 14:37 Archived in Romania