Train Across Canada - Seattle to Winnipeg

After dropping the car off and meandering around Seattle, where I had some great Thai food in, of all places, a mall and stayed a final night, I caught the Amtrak Cascades up to Vancouver. The weather was dull and turned to rain before we got to Vancouver, but even on a nice day I doubt that the trip up the coast would have been very impressive, whichsurprised me as this trip has a bit of a reputation. 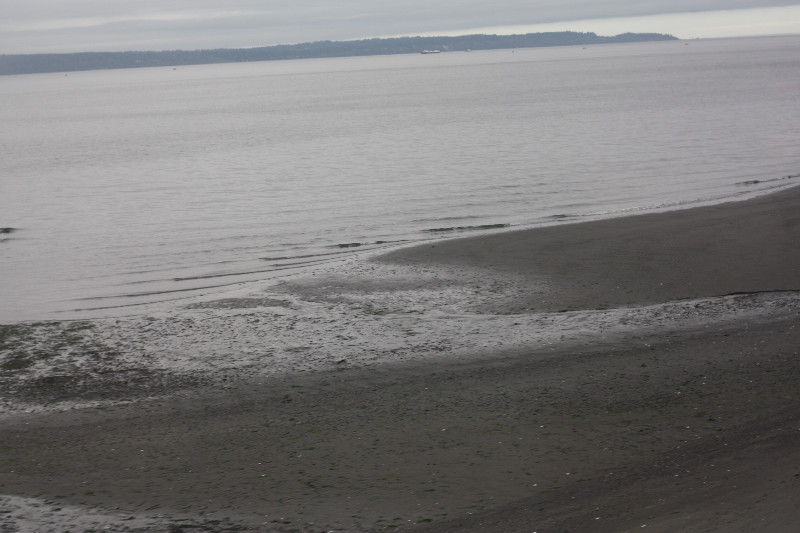 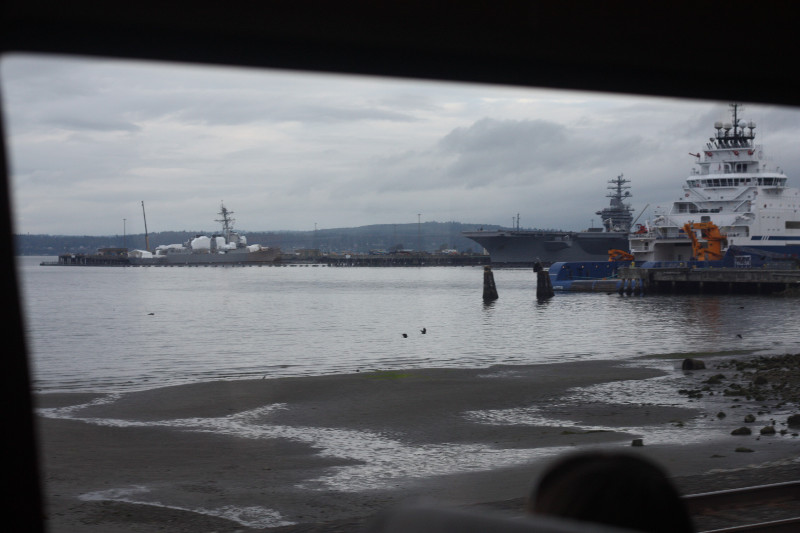 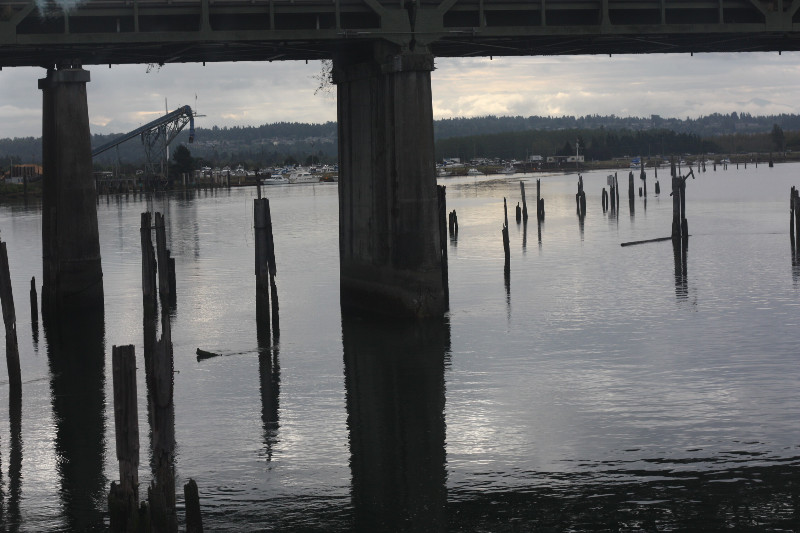 The train was confortble and had decent wifi, so instead of being blown away by the sights, I did some reading and used the wifi. In Vancouver, I took a final walk around, did some work in the library and was on the Via Rail train with what I thought was plenty of time to spare. I was a little surprised when it seemed to be leaving half an hour early - turns out, it was just pulling up the track a bit so it could back on to the long line of sleeper cars. There were just the two cars with seats (even allowing a pair of seats for every passenger, there were still spares) a snack car, followed by two restaurant cars then at least a dozen sleeper cars - most, I understand, occupied by tour groups. I figured that the stretch to Toronto would be too long to do in one hit, so chose to get off in Winnipeg - two nights later. 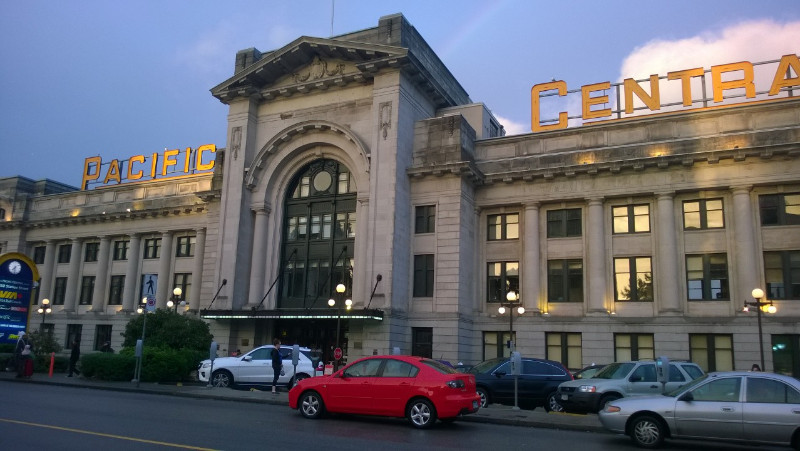 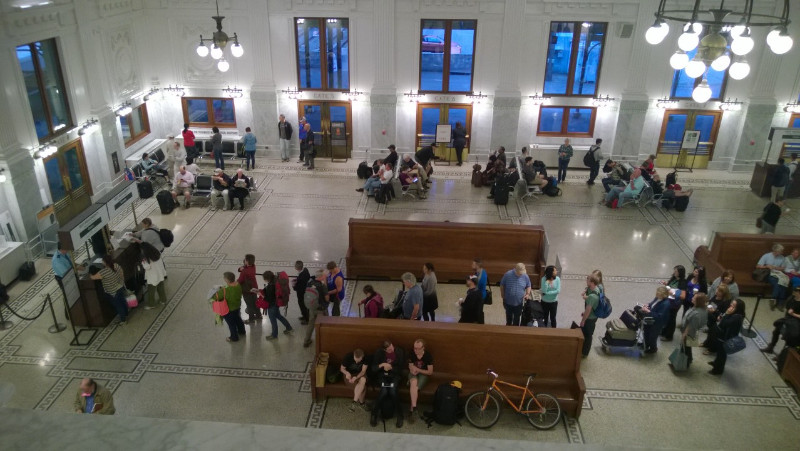 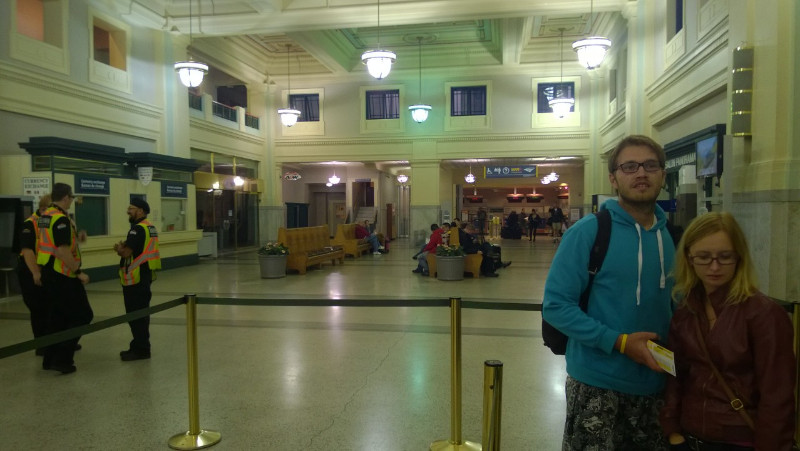 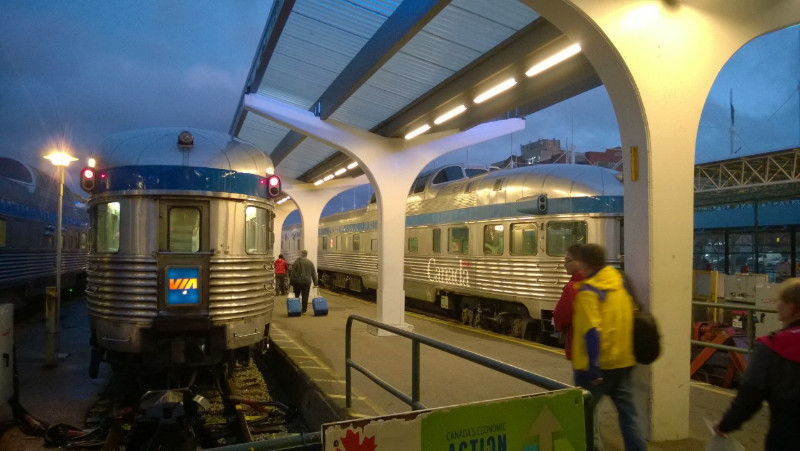 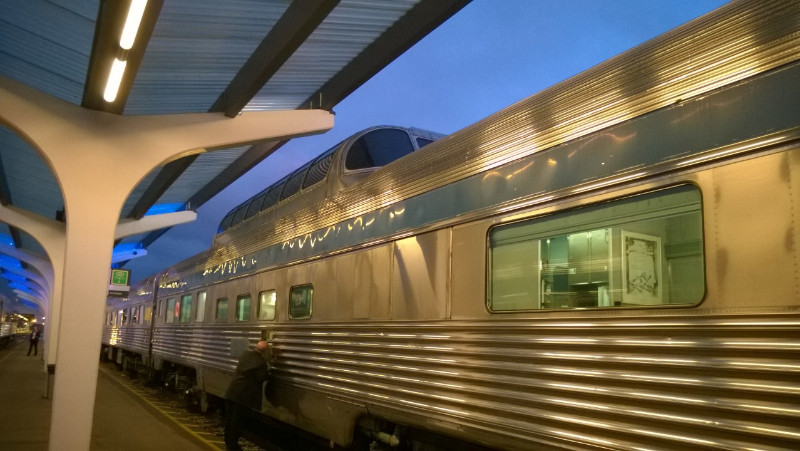 The enforced stillness on the train was great for unwinding - I finally started in on a book again that I had first began reading last November - Lawrence Durell's The Alexandria Quartet. As might be expected, it is a four part novel set in Alexandria, written in the 1950's and 60's but set before and during WWII. The first novel, Justine, documents the narrator's greatlove with one Justine, but it is hardly a straight-forward narrative. There is an underlying text, written by Justine's first husband to document their love, there are bits of other texts read by the narrator and some of his flights of fancy together with the contemporary story. In addition, there are pieces inserted from real author's - an Alexandrian poet Constantin Cavafy for example - and a real evocation of the city itself. It did get a bit confusing keeping these threads straight in my head, but there were so many fabulous passages of writing I had to carry on. In the second novel, the narrator has sent his manuscript to a mate to read: it has come back heavily annotated and with some important revelations, and so this is the second version of the first novel. One of Durrell's notions was the contingent nature of reality.

For light relief, I had all five series of Breaking Bad on my laptop, although I'm rationing myself to no more than one episode a day.

Of course, the train provided its own pleasures - the snack bar for a decent beer at most times of the day and night, the dining car when the demands of the sleeper car passengers allowed those of us in steerage to buy a meal there (I managed three), 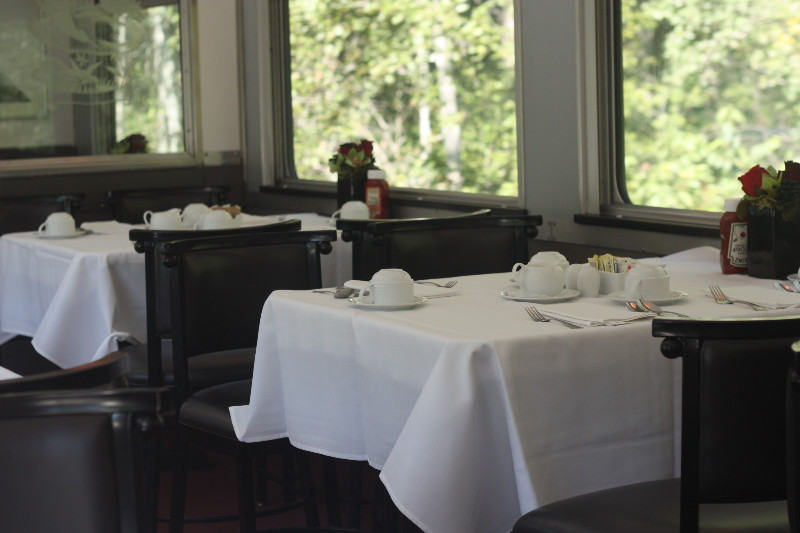 my fellow passengers and, most of all, the world passing by outside. At breakfast on the first morning, I was seated with a couple from Regina, Saskatchewen: she was not the friendliest but he always took the time to chat when we met each other. I spent a lot of time in the dome - the snack car was on two levels, with the upper level being almost entirely walled and roofed in glass - and it was very social up there. I even commandeered one of the tables as a very scenic office, as there was not a whole lot of variation in the scenery and there was a French passenger who was leaping up to take a photo whenever there was something to be seen: as long as I kept my eye on her, which was not exactly painful, I had warning of things to see. 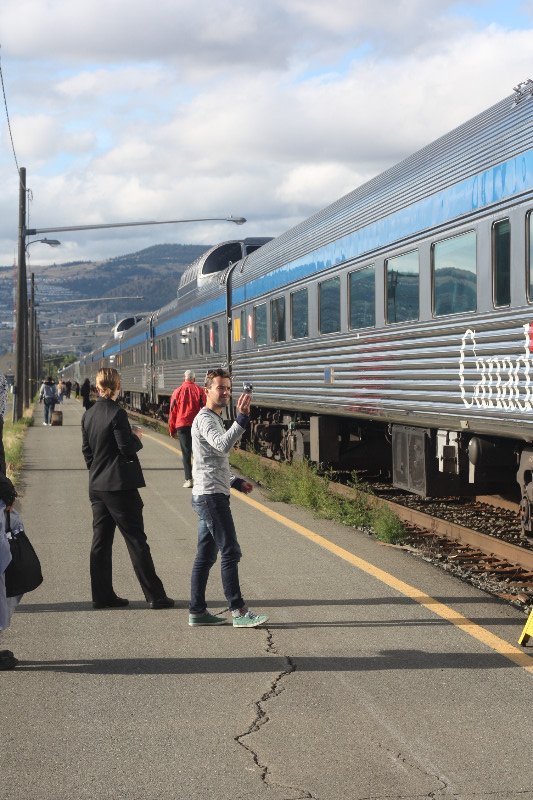 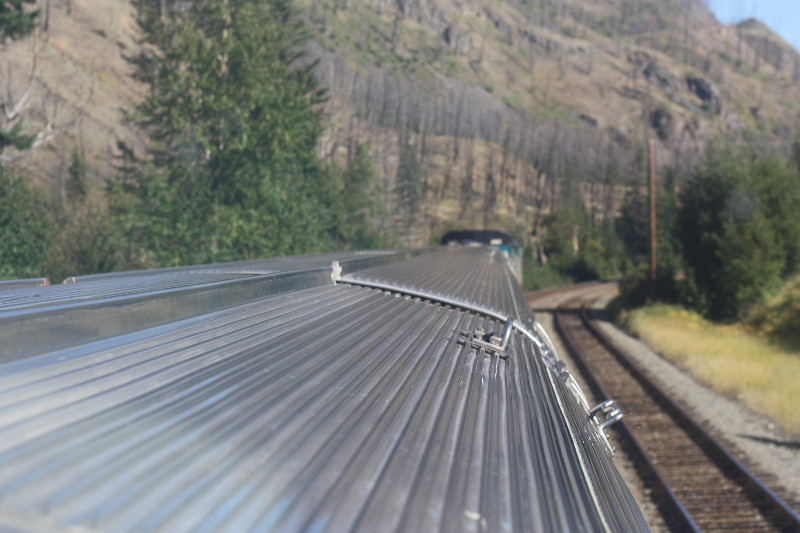 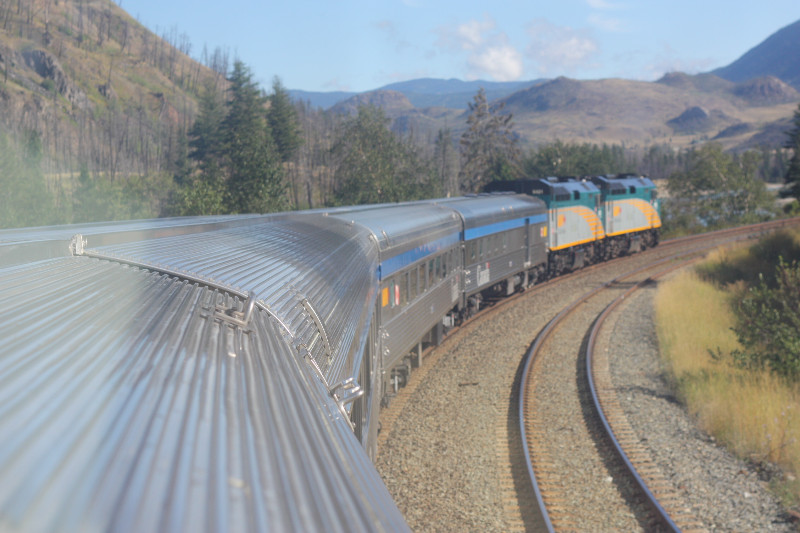 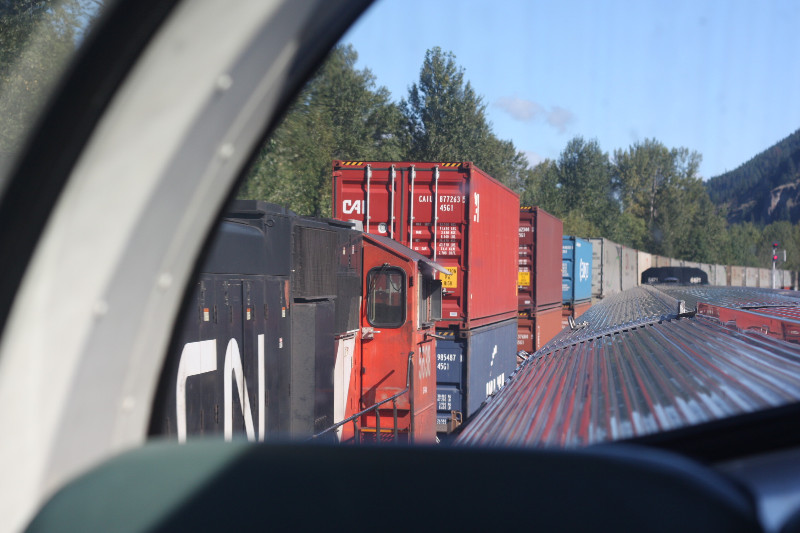 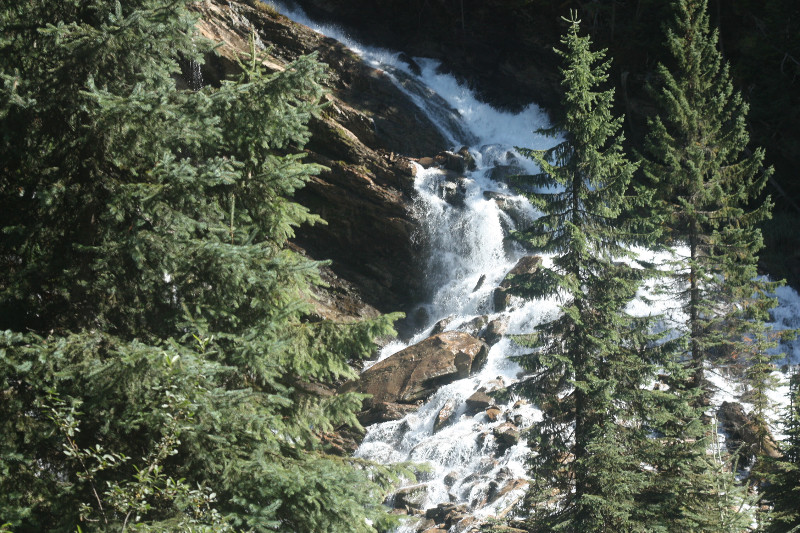 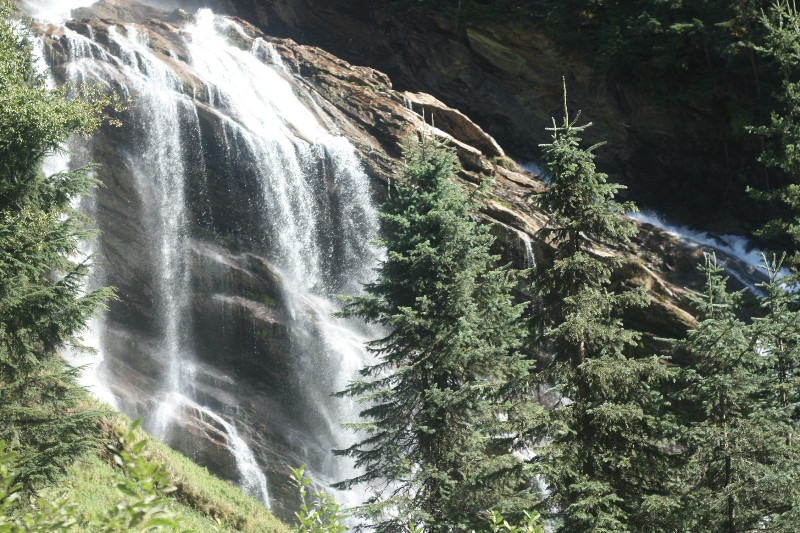 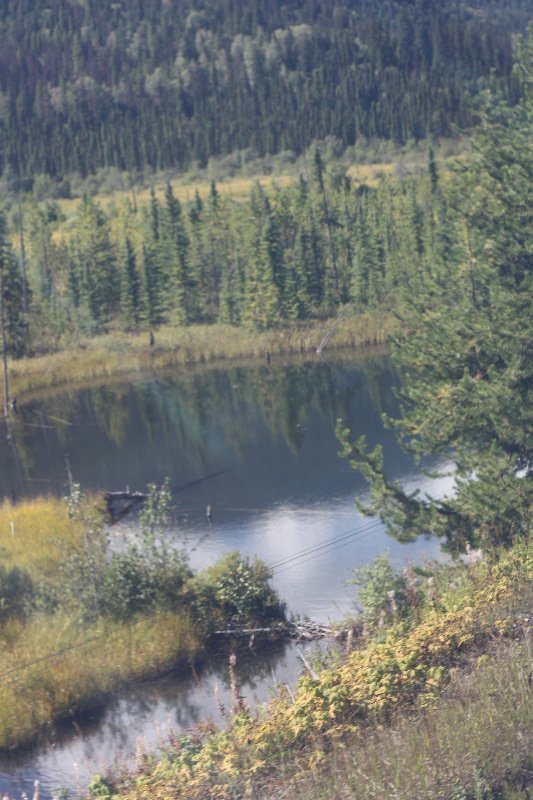 The train heads north to Jasper, where we actually stopped for a couple of hours (intentionally) - time to walk around the very small town centre a couple of times, stock up on food from the wee supermarket, get a very strong coffee from the cafe/laundromat/internet cafe and buy dinner from the Mexican cafe (which provided an odd, pasta-based Mexican dish which was very tasty. Once back at the train, it didn't exactly leave on time:once on the way, it is a slight bump up to Edmonton and then down through vast Saskatchewen to Winnipeg. It is practically all forest, apart from the lakes and mountains. Edmonton was a particularly aggravating stop - we were told we could get off to stretch our legs for 10 minutes and hustled back on to the train. We did leave. Three times - going across the bridge and then back to the station. Third time was not the trick - we then sat in the station for an hour. There was talk among the train crew that someone was in the car park, trying to jump the train, a blacktop was on its way - I hope that was not what held us up.

One of the more notable landmarks passed by the train is Mt Robson, the most prominent and highest mountain in the Rockies. A guy on the train said that it isn't the tallest mountain in Canada (that is Mt Logan) but it climbs the highest from the surrounding terrain. Later on, after all the effort my brother and I had spent trying to see some bear, it was a bit of an anti-climax to see a couple of them wandering past the train tracks. 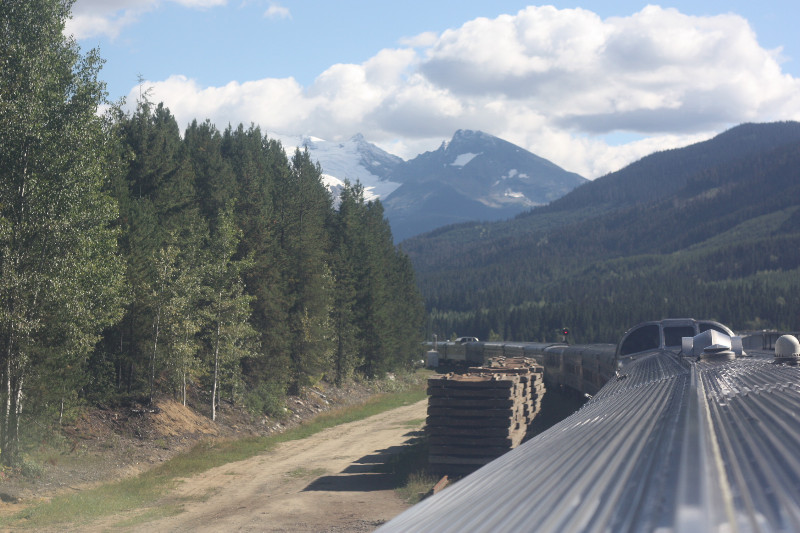 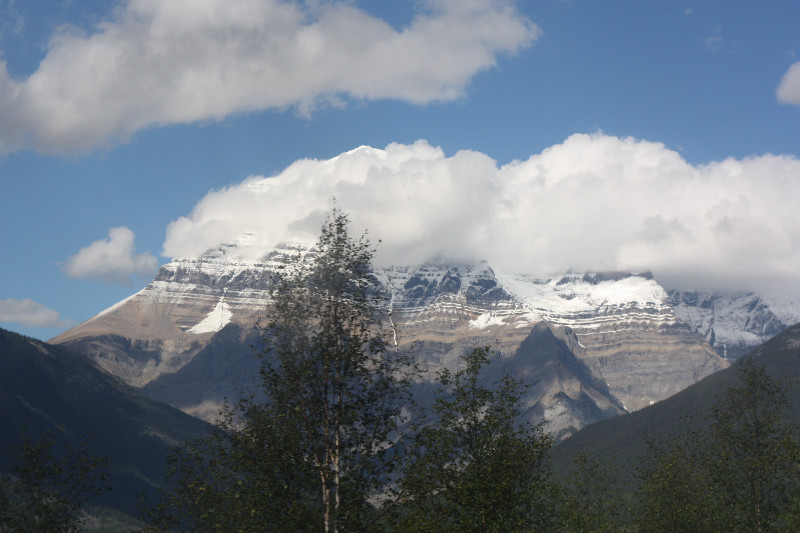 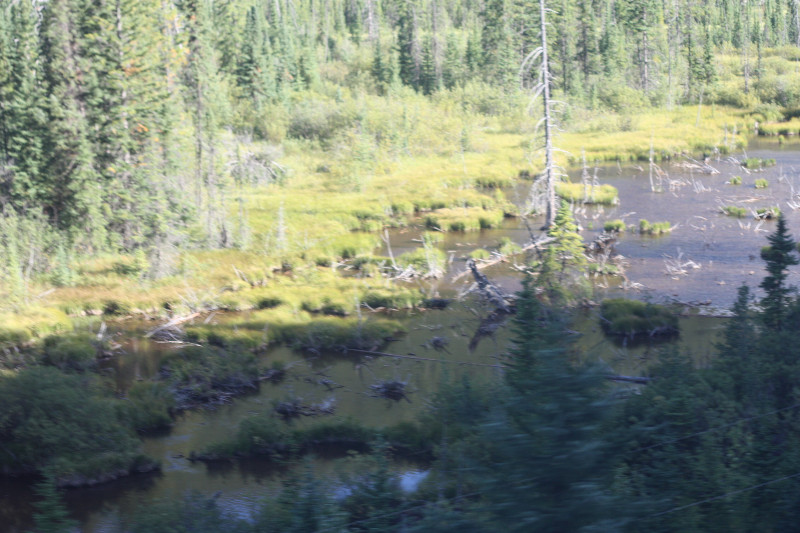 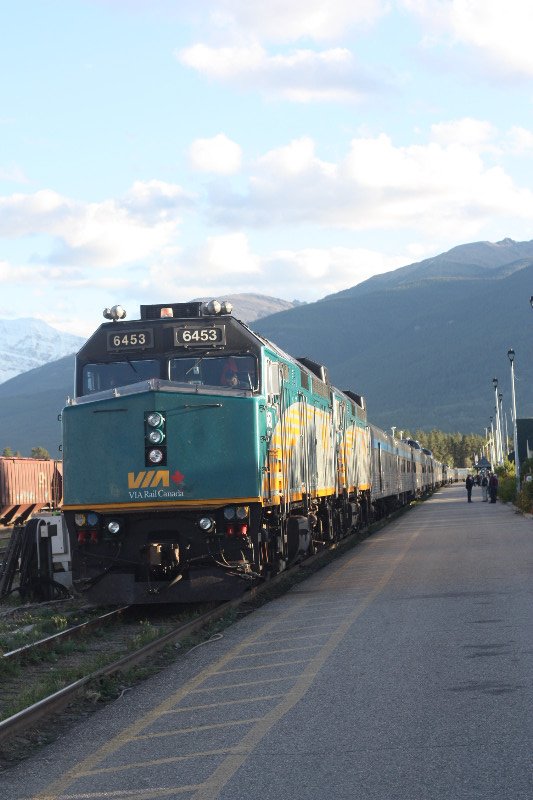 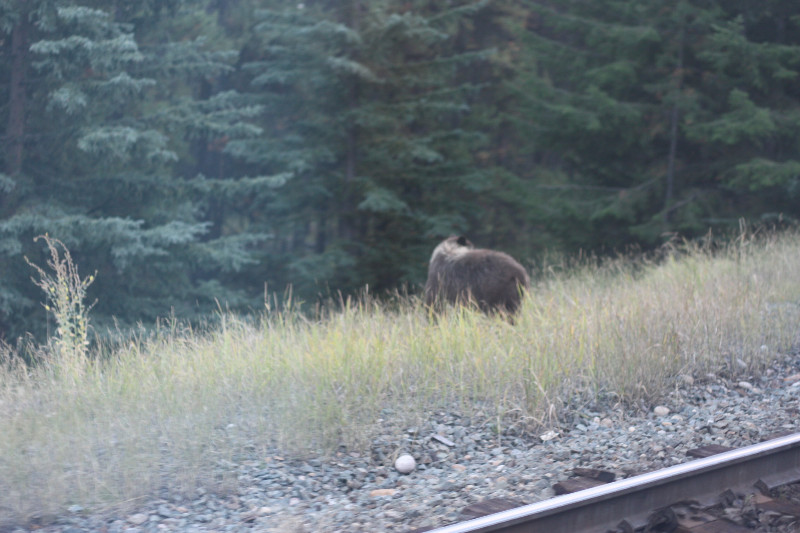 View from train - a BEAR! 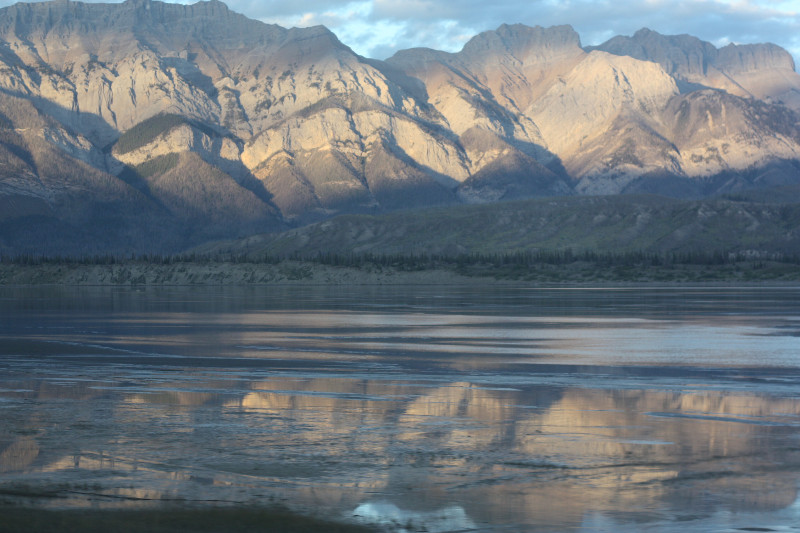 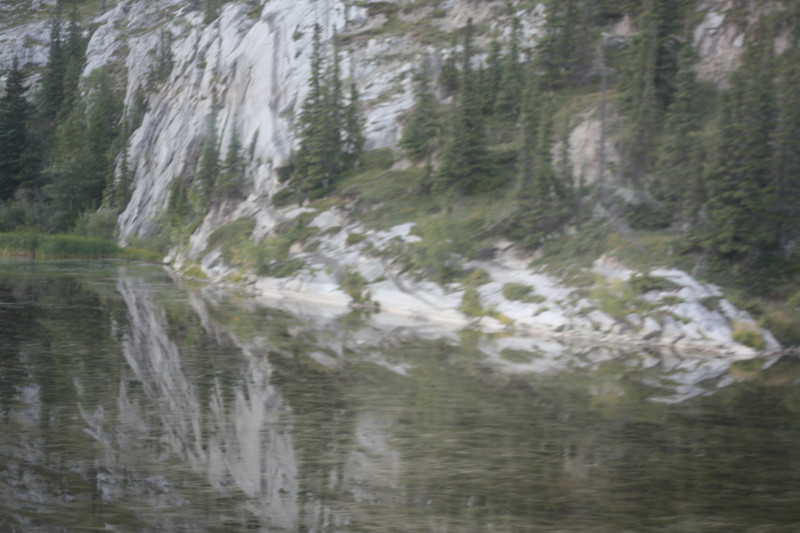 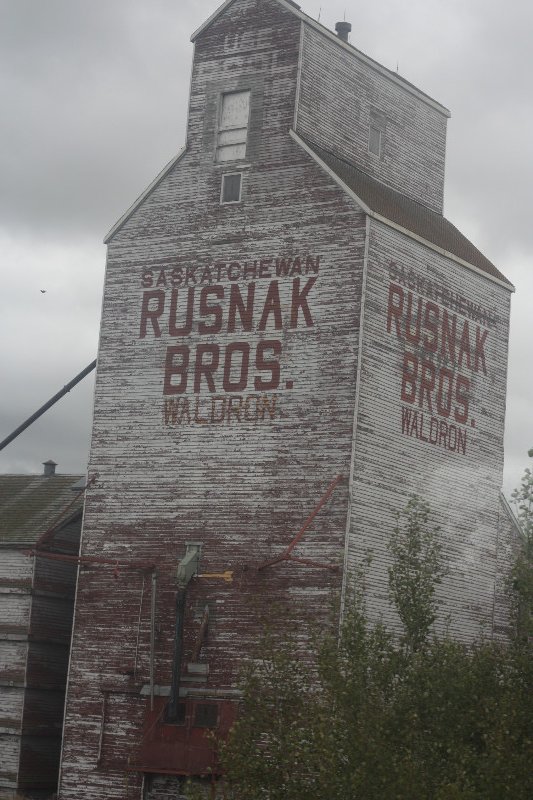 There were other hold ups, periods where we had to wait for trains comiing: one guy who works for CNR I got talking tp said there are a couple of trains each way which are two miles (the railway is not metric) long, so cannot be put on sidings.

But I thoroughly enjoyed the trip, the staff were great (they even offered to make phone calls for me), I ate well, I even slept OK in a normal reclining seat. So although we were four hours late into Winnipeg, it really didn't bother me - apart from the fact I was unsure about my accomodation. I was not staying in a hotel, but someone's house through AirBNB - Tara told me she liked to go to bed at 10:30, and here I was arriving after midnight. She was very obliging - although both she and a security guard I encountered did not like my chances of finding dinner, apart from what I could scrounge at the 7-11. What neither of them knew was that a new Chinese restaurant had opened, the Hong Kong Harbour, which stayed open until 2:00. So I was able to get a very pleasant dish - they called it Szechuan beef, but it was more like spicey sweet orange beef - and a beer. 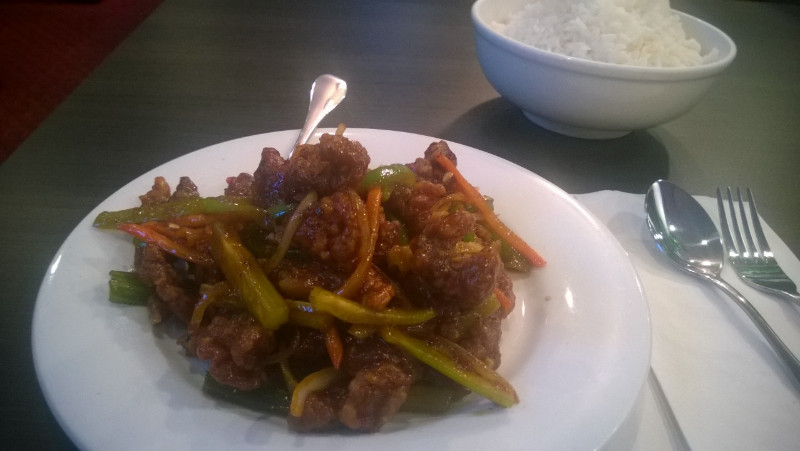 Posted by NZBarry 22:48 Archived in Canada