Train Across Canada: Montréal to Halifax

Halifax is the end of the line when it comes to train travel in Canada. That's pretty much the only reason I ended up there, plus the fact they have a University which suited my needs (St John's, Newfoundland has one too, but no law school). There are freight trains still running north and south, but the last passenger service north to Cape Breton stopped in 1990 and south to Yarmouth in 1989. The latter is a bit of a pity, as they're trying really hard to keep a ferry running between Yarmouth and Portland, Maine but I found it very difficult to get there.

The train across from Montréal was of the same design as the ones I caught from Vancouver to Toronto, but much quieter - not many passengers and no onboard entertainment. As I left Montréal, I had two surprises: I ran into the German couple from the Winnipeg-Toronto train, and my train left on time. Even more surprising, it arrived on time. Once on the train, the announcement came over - people with reservations, but only people with reservations, can come and eat dinner. I was a bit confused about how people would have made reservations, since we had just got on: it turns out the dining car was so close to empty that everyone dining had a table to themselves. I had a delicious beef dish, washed down with a couple of fine ales - a very nice start to a pleasant journey. It was rather similar to what I had seen before, so much so that I have zero photos, but not boring. I could watch the world go by, watch a couple of episodes of Breaking Bad and finally finished The Alexandria Quartet, which is very dense, but having the ability to read it for an extended period made it very rewarding. 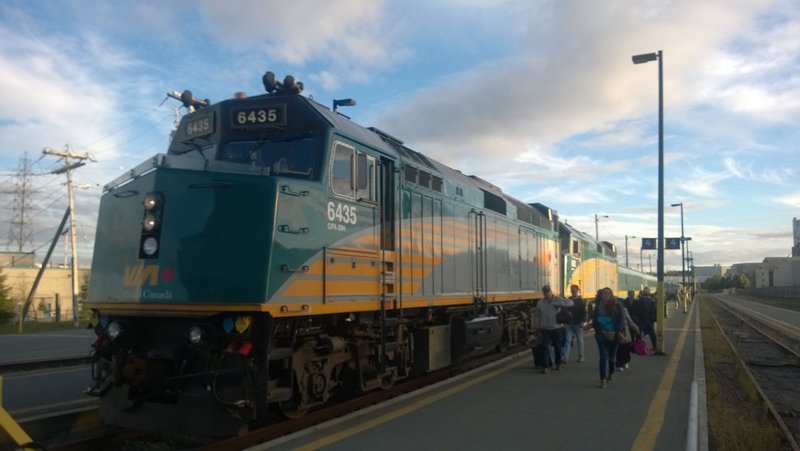 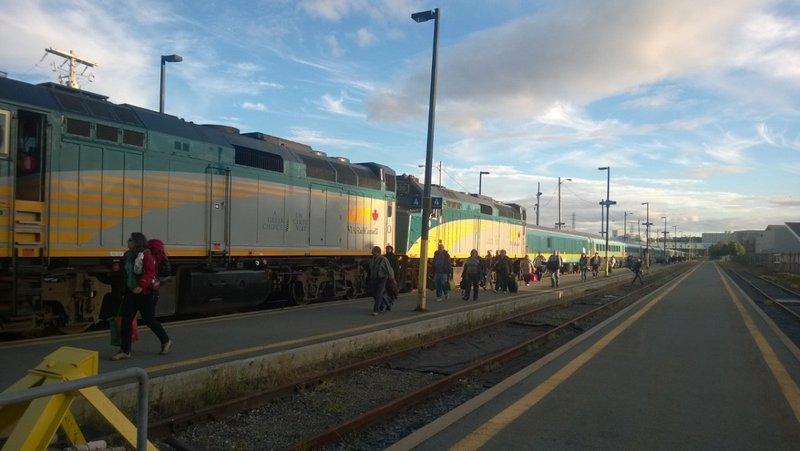 I spent a whole month in Halifax, and pretty much had tears in my eyes when it came time to leave: I had a completely wonderful time. The weather helped - sunny most days, cloudy for a few but actual rain for just two. My first week or so was in the hostel on Barrington Street - a very relaxed space where it was easy to meet people - I even found myself wandering the streets in search of coffee and smoking furiously with a retired gent from back west at 3 in the morning. Next door is Bearly's House of Blues, where I went a couple of times - the first time because I was hungry and I'd heard they have great burgers (they do, plus a wonderful Belgian IPA). Despite what you might think from the size of the audience, the singer was pretty good. I went back the next night for another of the beers, and the place was packed - kareoke night. Surprisingly: not shit. Across the road was a very traditional English pub, Henery's House, where I had dinner a couple of times. I also meant to go to the underground games cafe but somehow run out of time. 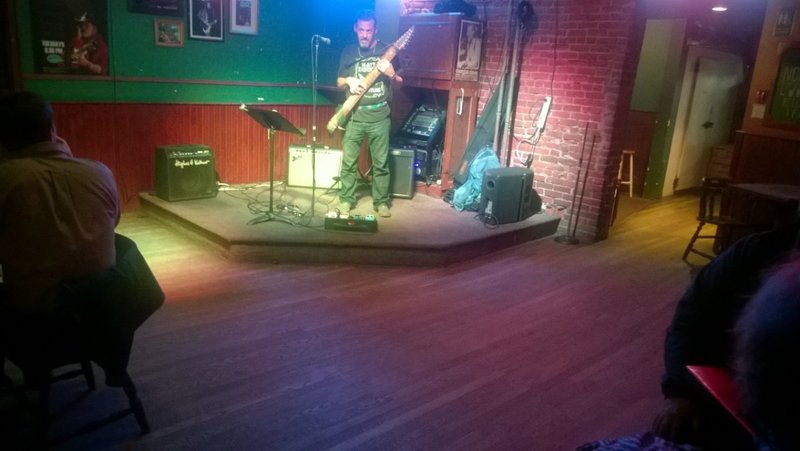 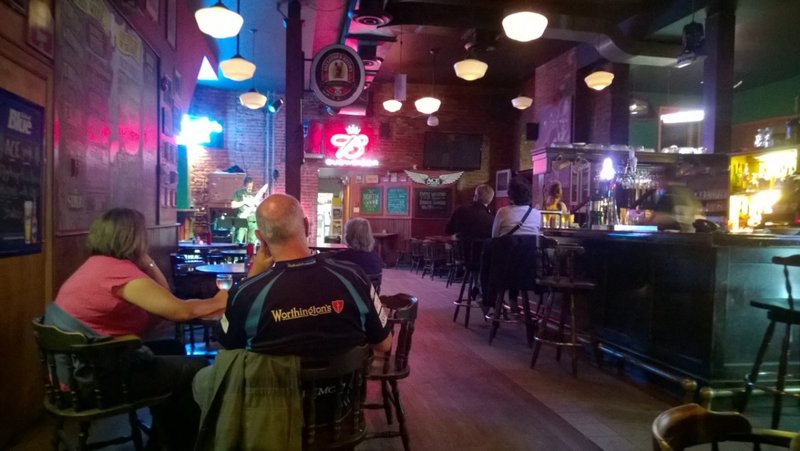 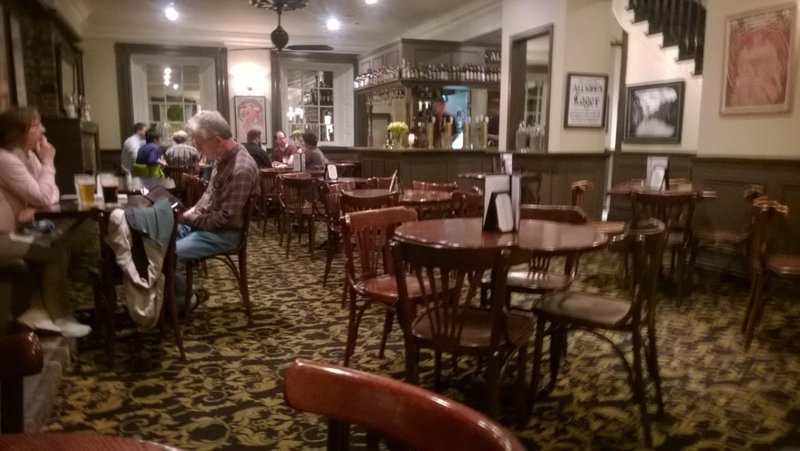 I spent my last three weeks in a place called Novel Stay - short term furnished accommodation, with a proper kitchen and lounge (and what is the one thing I cook? Sausages, eggs and beans. A bit tragic, but I was seduced by the fact they were artisinal, hand-made sausages). I hardly saw a soul the whole time I was there, even though it had ten rooms and a "host" who supposedly came in every evening. I did have an odd encounter with a neighbour - she and some mates were celebrating the end of their degrees: she came over (this is another 3 in the morning thing) and declared that there would be two weeks of fall, then it would get so cold people would either lock themselves away for the winter or go out and kill people.

My first encounter with the law school was a bit off-putting: I misread a sign the Dean had put outside the building and thought I had to show Dalhousie ID just to get in. That's not what it said, and in a month of going in and out, I was never challenged so spent my days here 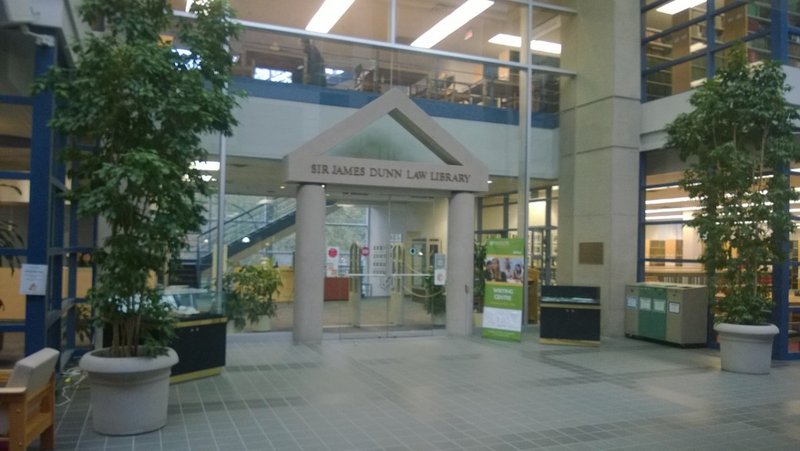 In the evenings, I'd relocate to what must be one of the ugliest libraries in the world 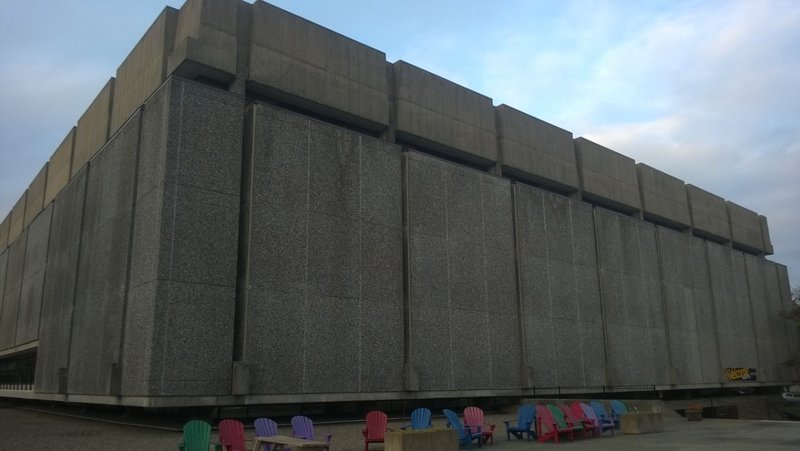 but once inside it was fine, and there was food and coffee available until midnight (not that I ever stayed there quite that late). Ordinarily, I'd also use the public library, for a change of pace and access to wifi, but central Halifax is currently without a library. It closed its main Memorial Library at the end of August, and the new ($60 million) one was not opening until late fall (no date yet - they want to be ready). 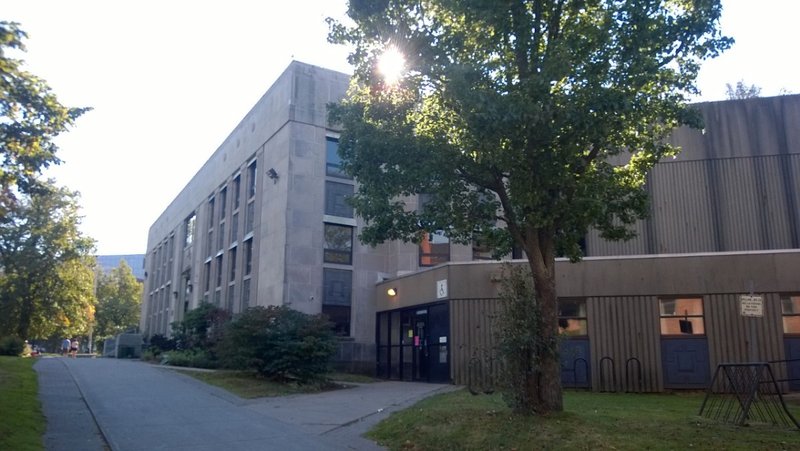 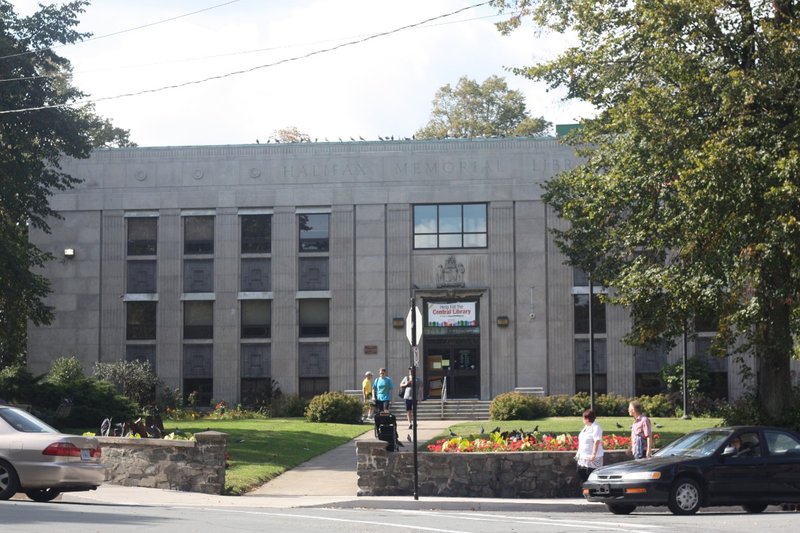 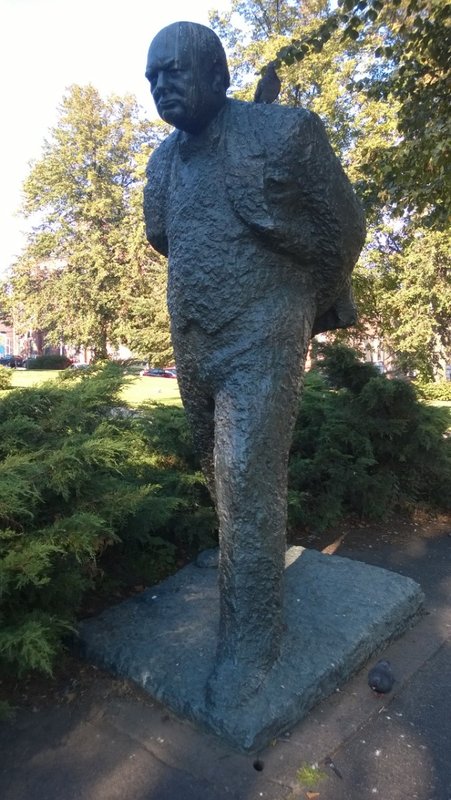 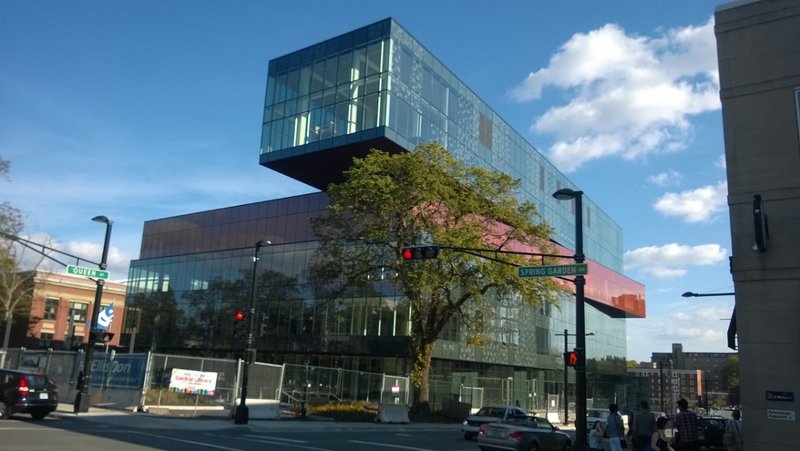 It certainly looks impressive, although at least one person I spoke to thinks it is an eyesore. Apparently it is the first major building built in downtown Halifax for decades, and has several associated projects, as the Council sold vacant land to developers to help fund the project. I did find a public library I could use, but it was quite awkward to get to.

Architecturally, Dalhousie doesn't have much going on, although it physically merges with the University of King's College, which is the first Canadian University, and looks rather good. 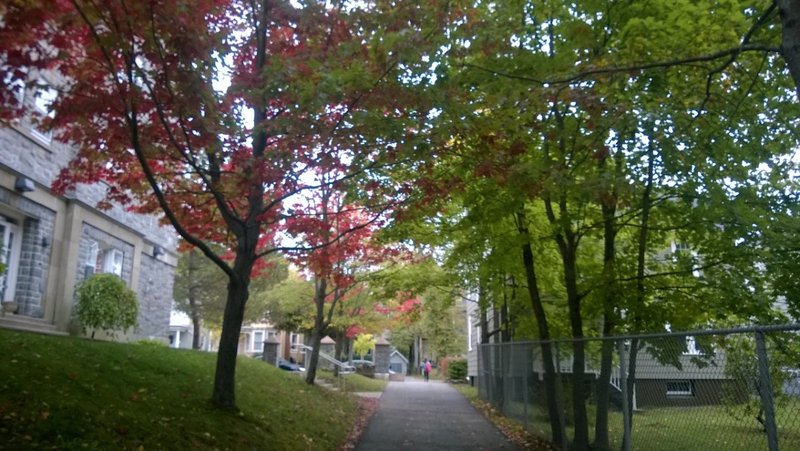 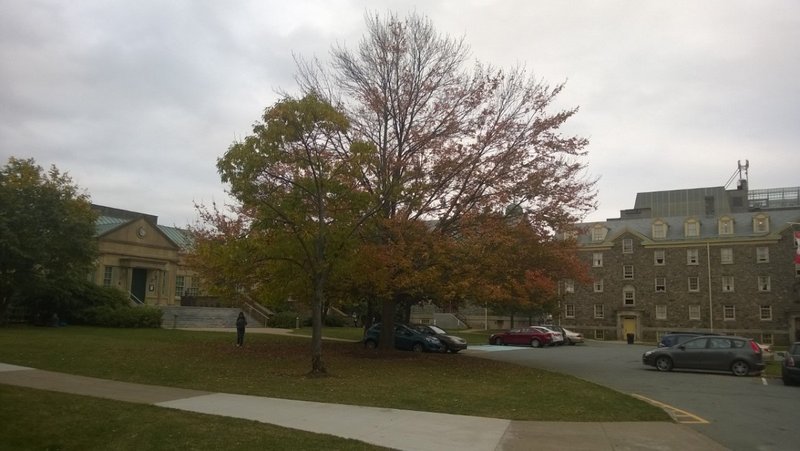 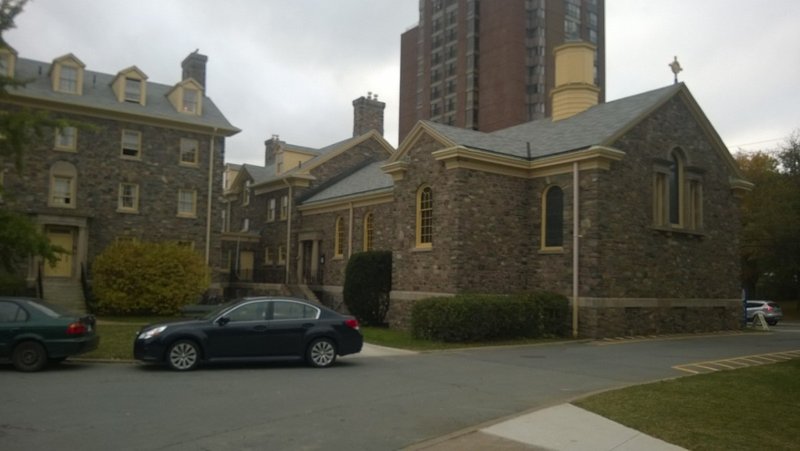 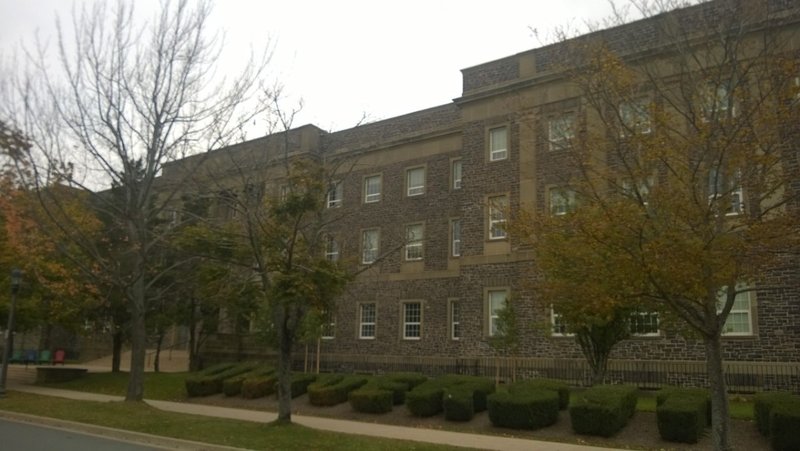 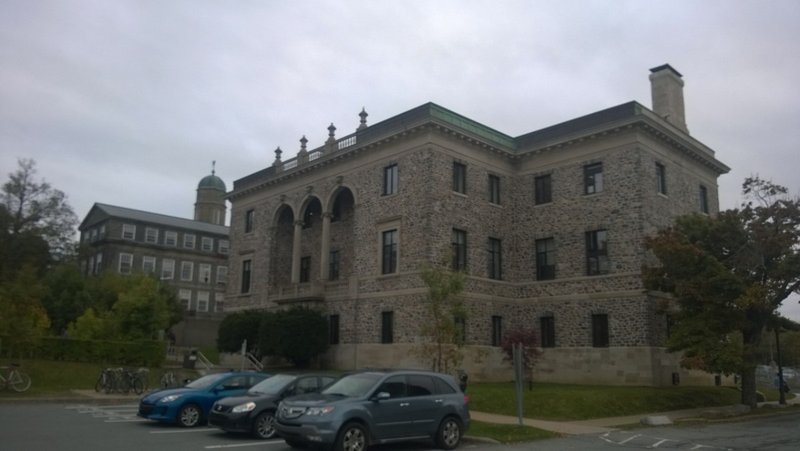 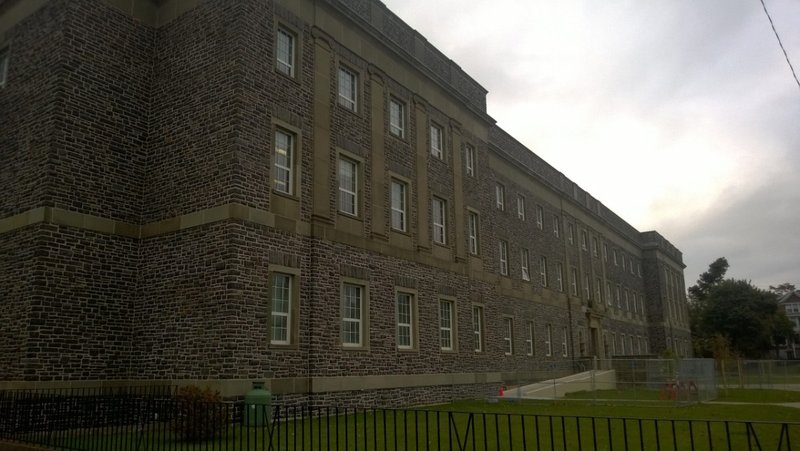 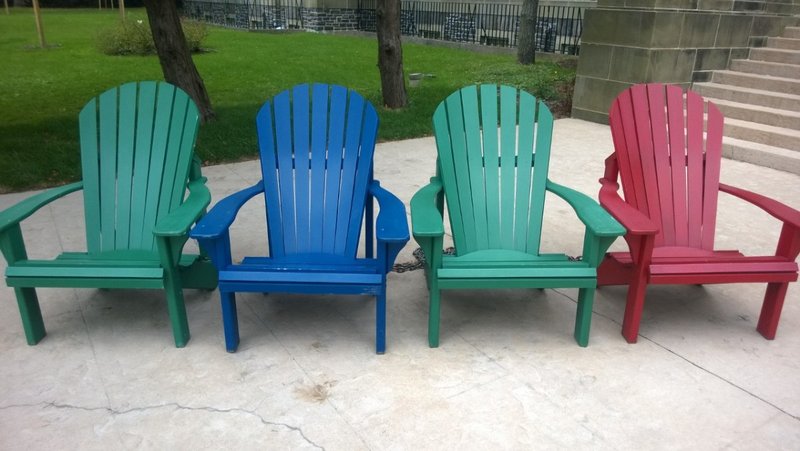 One of my first priorities was to find a regular coffee haunt, and after a couple of false starts, I had three. There was one right beside the hostel I thought might do but by my second visit, I had decided their coffee was dull. On campus, I took the advice of the library staff, but they also sent me on a false trail, to Second Cup. At least a week after I arrived, I just walked around the block and found one of the sweetest coffee shops I have ever experienced, Coburg Coffee. I'd pop in every afternoon and developed a terrible habit of eating grilled cheese sandwiches. One of the staff I only ever saw about three times, but every time she smiled at me as if we'd been friends for ages - in fact, she served my very last Halifax coffee, and it was her smile that almost had me in tears. There was another staff member, so tiny she can't even be seen behind the cash register even when she's standing up, but who had an enormous smile, one that made me glad to be alive. 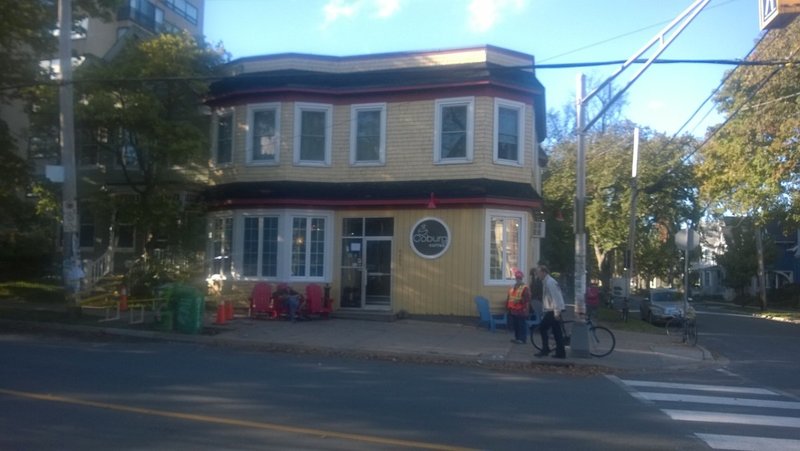 I was also lucky to have a great place just around the corner from my house - I nearly didn't go in because it has such a lame name (Humani-T) but it became my lounge - I'd go in on my way to and from the uni for a coffee and a wicked ginger date slice and use their wifi or read, it was open till 10:30 most nights. It only took a couple of days and some of the guys working there knew what I'd be wanting. Nice as it was, in the last week they were gazumped by my third cafe, which also had a lame name - Just Us - but their coffee was fabulous (and came in proper sized cups as standard).

Wanting to meet people, I found a few groups on Meetup.com - there was one for Halifax singles of a particular age, but the one meetup I attended was strange - it was for a movie, a random romcom, but as soon as it finished, everyone just left. I got on far better with a group called Halifax Friends International - it met every Sunday night at Humani-T just to talk, and talk we did! One evening we hadn't done talking when the cafe closed, so we moved on to a pub. Good times, and I may have come away from one of those evenings just a wee bit smitten with another member.

I managed to hit two film festivals - the tail end of the Atlantic Film Festival, where I saw four movies over two nights - including the latest from David Cronenburg, Maps to the Stars and a very strange locally made movie, Roundabout. It has been panned a bit by critics, but I just loved God Help the Girl, made by Stuart Murdoch of Belle and Sebastian fame, about three lost kids who find each other and start a band, and also a vehicle for some songs Murdoch had written which were for female vocalists rather than Belle and Sebastian. I also went to the Japanese Film Festival at St Mary's University and saw every film in the festival: there were only two of them. The Consul-General himself came from Montreal, and gave a very strange introduction, talking about the great films they'd shown at Montreal and then saying "but they're not what we have for you". Instead, you'll be watching Hospitalité and Until the Break of Dawn. The first one was cute: this couple runs a printing shop and live above in a tiny space. They take on a new employee, who moves in, then moves his wife in, with whom the boss sleeps. This gives the employee power over the boss and how does he use it? He takes control of both workplace and home - the latter, by running it as a backpackers, with around 30 people crammed into every nook and cranny. The latter was pretty cool too - about a tsunagu, someone who can facilitate a meeting between a live person and a dead one - not like a seance, they actually get to sit down and talk to each other. Of course, there's more to it - the film focuses on three people who want to contact a dead person, why they do and what happens to them. Oh, and I saw Gone Girl.

On the way down to St Mary's, I was totally impressed by the great housing I saw, and they may have inspired me to paint my own house a bit more colourfully when I get home: I'm thinking purple (not that I seem to have captured any purple houses in a photo, but they exist). A lot were in a couple of blocks of Tower Road - built in the late Victorian period for merchants, who had a bit of cash to flash. 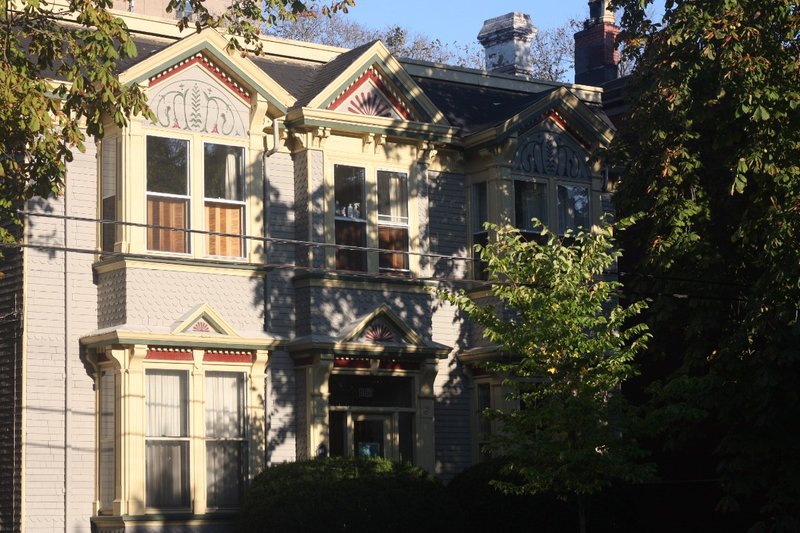 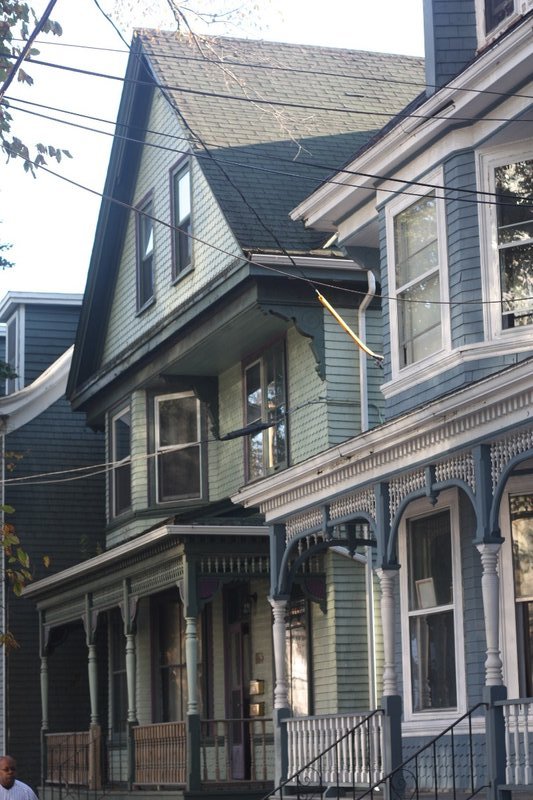 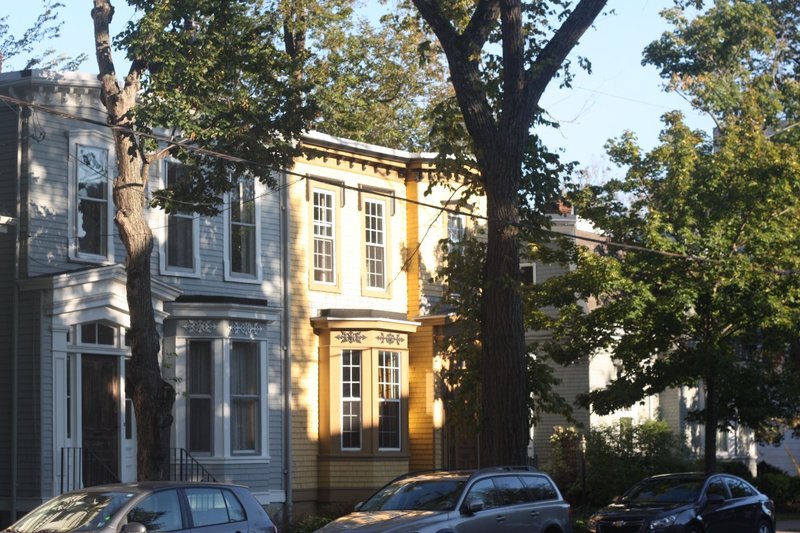 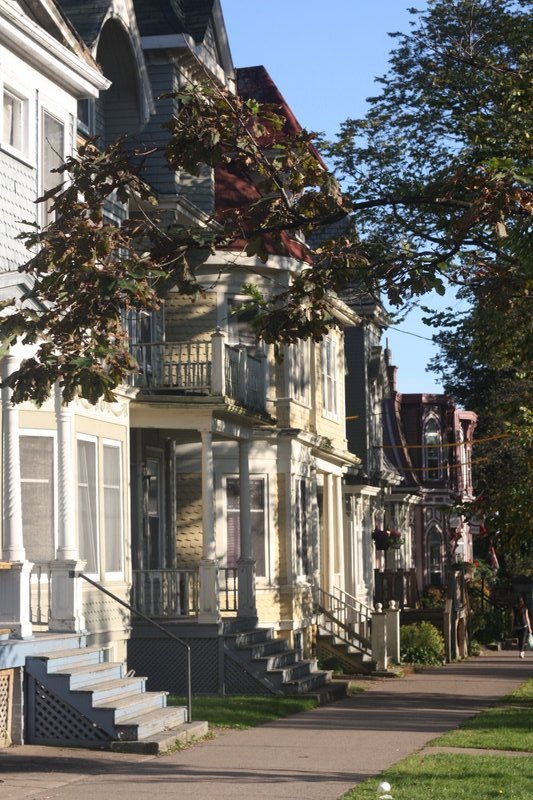 This post is an overview - I have more to show you Halifax as I walked around it.

Posted by NZBarry 21:24 Archived in Canada