My train was just a little bit late into Sighisoara, getting in at about 1:00 a.m on New Year's Day. None of the others waiting in the station got on, and I found that I had an almost deserted train to myself. After a quiet beer, I turned in and had a great night's sleep on the train - at least until I was woken by the border guards wanting to see my passport as we left Romania and entered Hungary. So comfy was I that I just wanted to stay in bed; there was no way I wanted to push myself to explore yet another city for a couple of days.

It took a fair while to find my hostel; I got out to the right metro stop, went backwards and forwards on a tram a couple of times, even went right to the address I had for the hostel without seeing it. It was only when I went into the Népliget bus station and had a helpful fellow there show me the address I had on his map that I decided the hostel had to be where it said it was, and went back for a third time. This time, I finally noticed the flag that had furled up, concealing the fact that it was my hostel. It was certainly in an odd location - nothing nearby of any touristic interest (except the bus station), a great place if you wanted to buy a car however, as it was between dealerships for Lexus and Lada cars.

Because I was so early, something like 11:00 in the morning, I could not check in, so was forced to overcome my lethargy and go exploring. So glad I did, because I had a great afternoon exploring the Pest part of Budapest. First off, New Year's Day lunch; a delicious bean and sausage soup followed by a tasty "Budapest Spaghetti" in a very friendly, homely cafe I found in the centre of town. After that, I just wandered around in awe at the formal beauty of the buildings - street after street of very handsome buildings, something like this: 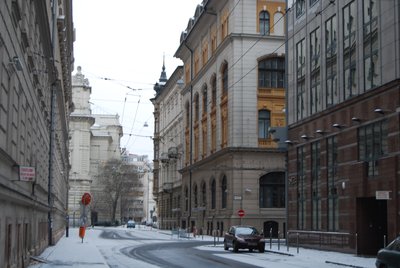 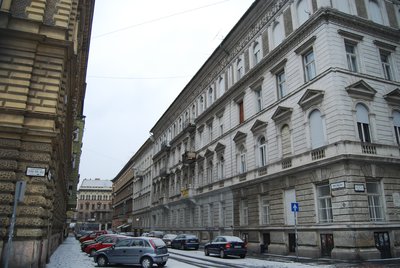 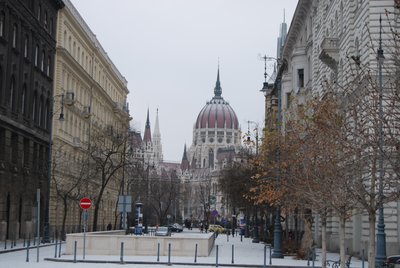 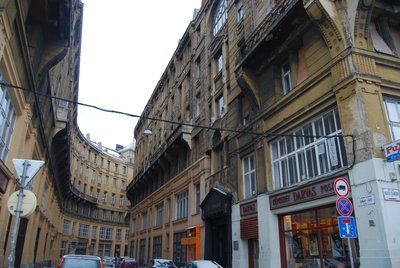 I went a bit mad taking photos, so I won't burden you with too many but the Hungarian Parliament Building was wonderful, although very hard to get in one shot (it is so big): 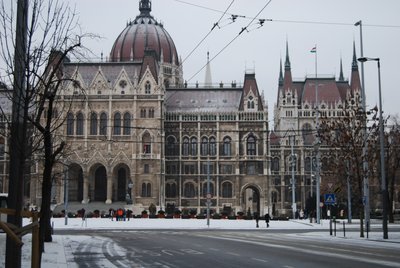 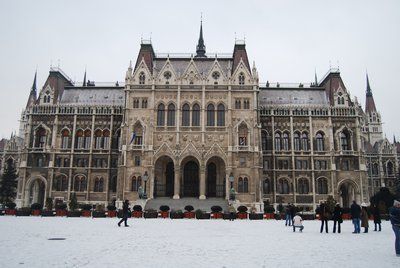 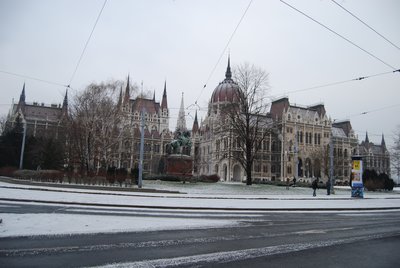 Then there were a couple of churches which caught my eye: 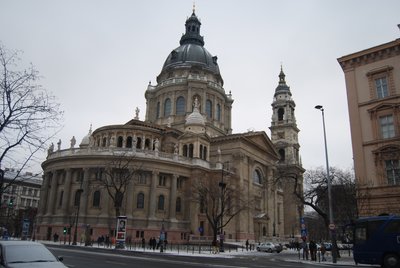 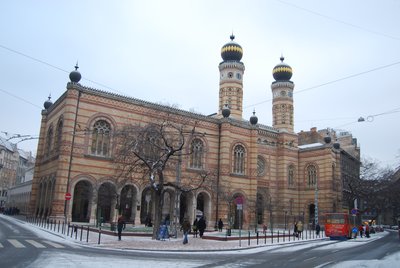 Since it got dark and cold at around 4:30, I decided to make my way back to the hostel and take my chances in terms of getting dinner nearby. Bad move! I once again had the choice of McDonalds or McDonalds (why they had two, I have no idea). Luckily the petrol station was enlightened enough to sell beer, so after my McD's at least I had something decent to drink for New Year's Day.

On the Friday, I decided it was time to go across the chain bridge 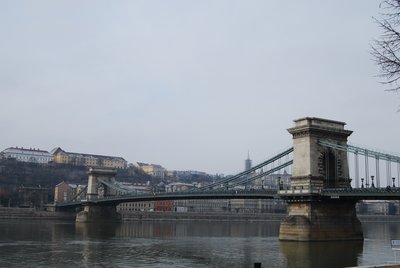 and see Buda. It has a tiny railway (well, actually a funicular) 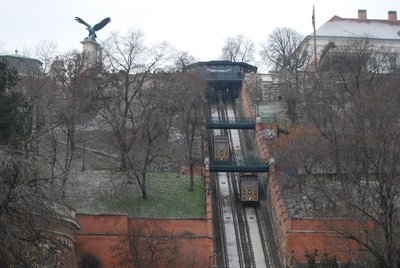 which promises a lot; 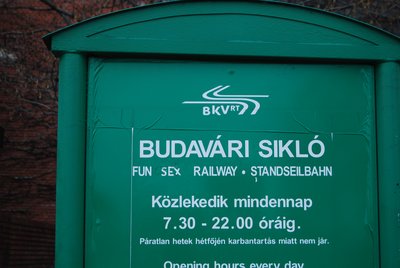 This is the old city, and largely focused on Castle Hill – the former Palace has been turned into the Hungarian National Art Gallery, 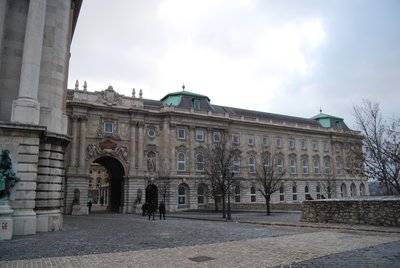 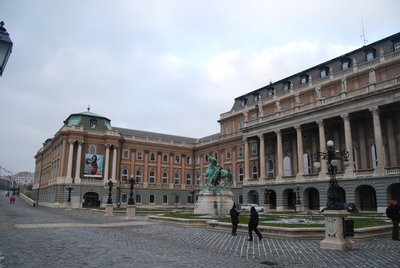 which had another fabulous collection. I was amused by the guard, when I asked about the special exhibition she was guarding (and demanding extra money for from anyone who wanted to see it): "It is a one man show - in the rest of the gallery, you can see ten centuries of Hungarian art". The first paintings to confront me were again huge things - Peter Kraft did a coronation painting which was life size - I measured myself against a fellow standing near the front of the painting and we were the same size.

One fellow whose work I liked a lot was Mihály Munkácsy - generally pretty dark in tone; I loved his "Tramps at Night" and another he did of John Milton, possibly dictating Paradise Lost. There was a lot of his work in various parts of the gallery.

Up on the top floor, they had the 20th century works, and I was captivated by several, starting with Sándor Bortnyik's "New Adam" which portrayed him as a dandy, but also on some sort of podium with a crank handle. "New Eve" was more obviously robotic. There was one painting I kept going back to, Tibor Csernus's "Modellers" - it kind of made me think of Eliot's Wasteland, but it was very carnivalesque - brightly coloured, with lots of model planes, some smashed, then other images of maybe just plane bodies and other random stuff happening. I tried really hard to get a photo of it but I think the guards were on to me, one kept following me around. But now I see it is on the gallery's own website, but it seems much more muted than the real thing: 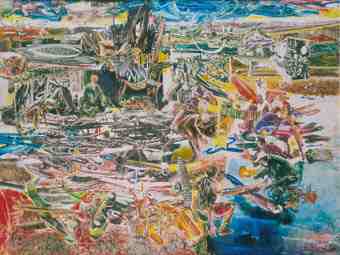 I did score a few photos, and am pleased with this, of another picture that intrigued me, Andras Wahorn's "Running Boy with Woman" 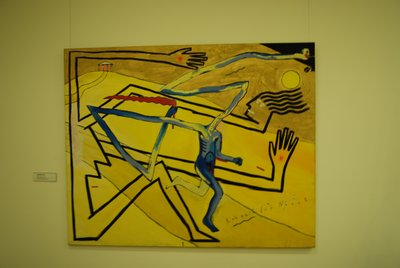 After the gallery, I went in hunt of one of Budapest's famous cafes, but it was so packed I had to leave, just couldn't handle the bustle. There was no bustle (surprising, I know) at the Marzipan museum, but it didn't really do it for me, so I settled for a beer.

Back in Pest, I did get to one of the famous coffee houses, one of the places where Hungarian intelligentsia have been gathering for generations, the Central Coffee House. Surprisingly, Hungarian goulash turned out to be a soup, not a stew. So good was it that I really wanted to upend my plate into my mouth, but decided it was probably too civilized a place for that sort of behaviour: 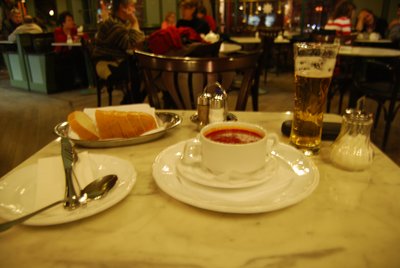 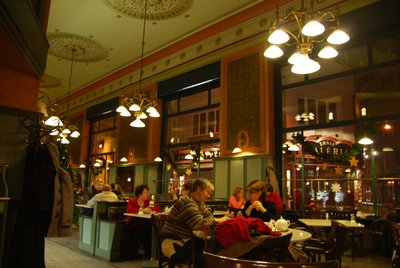 I found that I had somehow run out of cash for the metro, and refused to get a $2 cash advance from my card, so decided to walk it - turned out to be only about half an hour. Two places really caught my eye on the way: 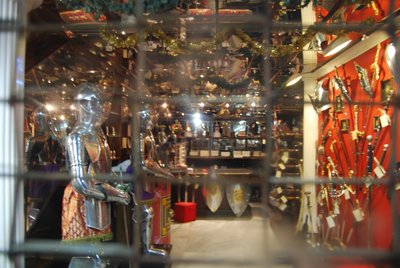 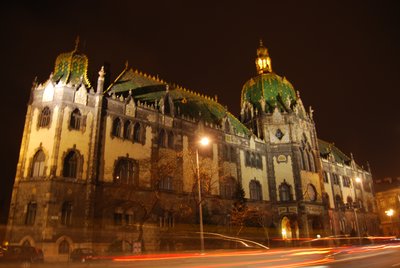 Finally, some pictures just to show how spectacular Budapest is: 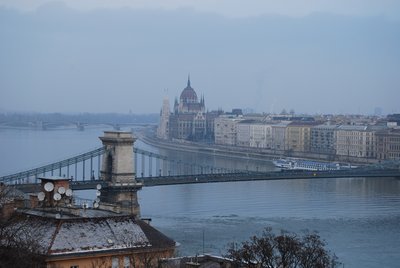 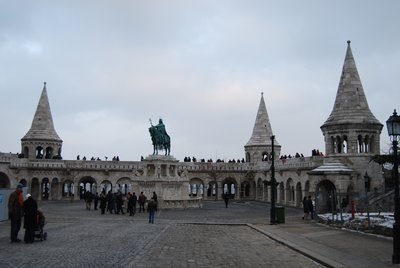 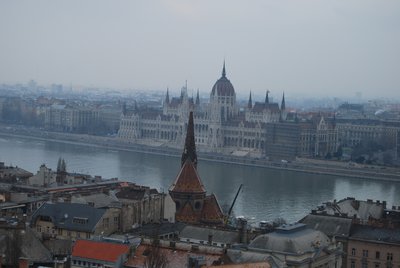 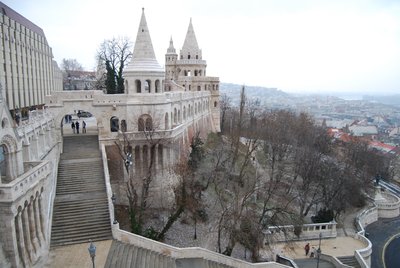 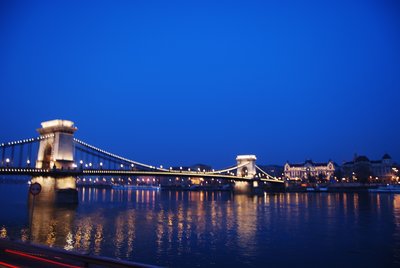 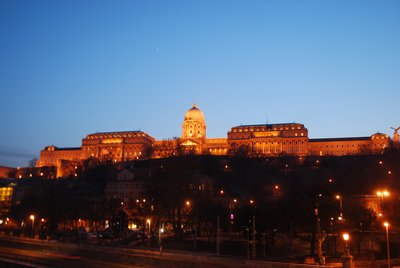 Posted by NZBarry 14:18 Archived in Hungary