So, about Halifax not wanting me to leave? Turns out all of Canada was in on the act. After a last visit to the Rocket Bakery and a chat with Laura, I caught a taxi to the airport with plenty of time (there is a bus, but it stops 2 km short of the airport on Sundays. Small towns, huh.) I go in to check in and naturally have to produce my passport since I'm flying to New York, and reach into where I keep it in my backpack. Not there. I check my pockets. Not there. I take my bags away and empty them all on the floor of the airport. Not there. I search my memory to see if it has any recollection of putting my passport somewhere safe. Not there. So plans get a bit of a spanner chucked into them: I had a carefully laid out line of buses and trains all the way down the East coast, a gig to go to in Philadelphia, hostels booked. Instead, I get Air Canada to take me to Toronto, report the loss of my passport to the airport police there (no police anywhere near St John's airport), have a surprisingly nice stay at the airport Travelodge and start working out how to replace my passport.

For those who know me, it may come as no surprise that this is not the first lost passport incident in my life. In my very first trip overseas, within less than a week of leaving home, I'd lost my passport. I put it on the counter in a Bangkok Post Office while I bought some stamps, and someone swiped it. In the bad old 1980's, I was able to go to the Consulate that night, borrow a couple of hundred dollars and sort out a new passport within a couple of days. Now with modern technology and communications (I even have a Government approved digital image of me in the fancy RealMe system), getting a new passport took two weeks. It is a good thing I'm running in arrears with my blogging, because there were a few false alarms, when I thought I'd be good to go but wasn't. I learned not to book transport out until I'd actually seen the passport.

With a Consulate just a few hours away in Ottawa, getting a new passport would take no time,I thought. Nope. With the improved NZ passport system, they're issued only in Wellington, London and Sydney. My digital photo was no good: I'd have to get it done the old-fashioned way, with someone signing the back, someone who knows me and has a NZ Passport. After a bit of research, sending it back to New Zealand was going to be the quickest, as it was going to be quicker to send it there than to the one person in Canada who met both criteria! [Although now as I write this, it suddenly occurs to me that I do know someone right in Toronto and another down the road in Windsor. D'oh!] I paid a small fortune for couriers both ways, so what do the passport office do when they [very quickly, to be fair] issue the passport? Put it in the post. The POST! My trusty envoy in Wellington retrieved it and got it on the courier which (a) failed to get it to Auckland for 24 hours (b) retained it in Memphis for a similar period and then (c) when it finally arrived in Toronto, detained it because they don't deliver on Saturdays. Let's not even suggest a Sunday delivery. The post would have been quicker. My Monday involved a refresh of the Fedex website every five minutes - oddly enough, Jess at the hostel I was staying in was quicker to tell me it was there than Fedex.

My time in Toronto was not all bad. I found a nice coffee shop at the main library, Balzacs, and when the right barista was on, the coffee came out perfect. I ate some nice food - great ramen in a wee shop I went into simply because it was the busiest in a line of restaurants, even better dumplings in a place that turned out to have been voted the best Chinese restaurant in Toronto (again, I went in because t was busy). I went twice to a place called Lee Chen just because it was straight outside the public library and then three times to a place called Fran's, a diner started 70 years ago which still sells diner food but is a bit more posh and has a bar, because I enjoyed the atmos and the food. I wasn't carrying my camera around so have hardly any photos, and they're all of food. 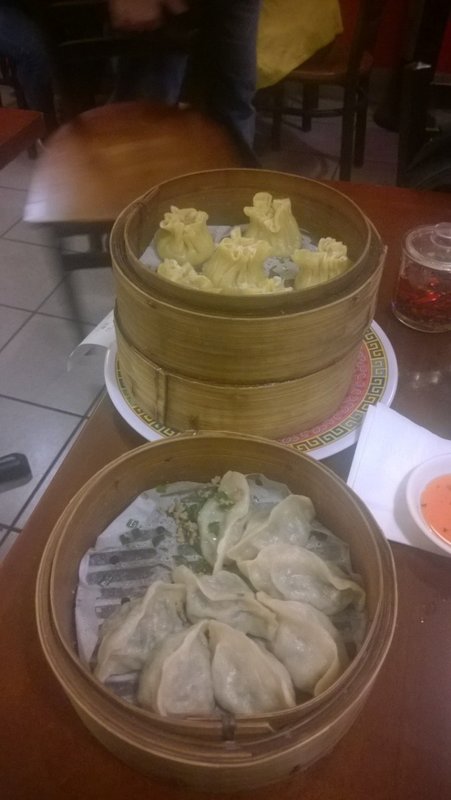 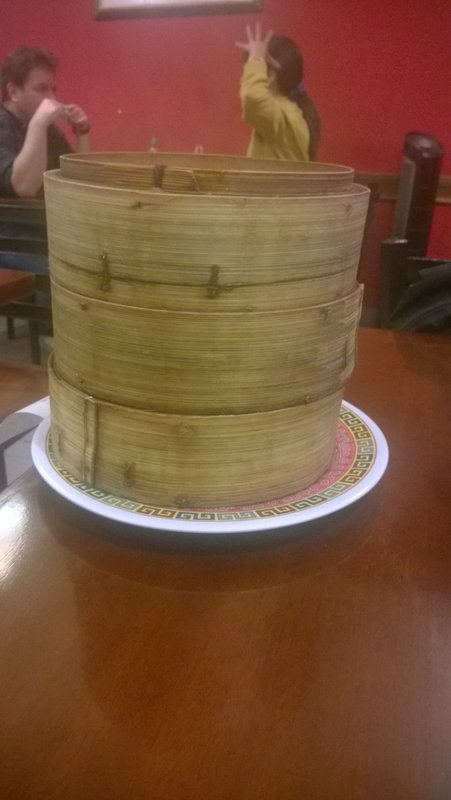 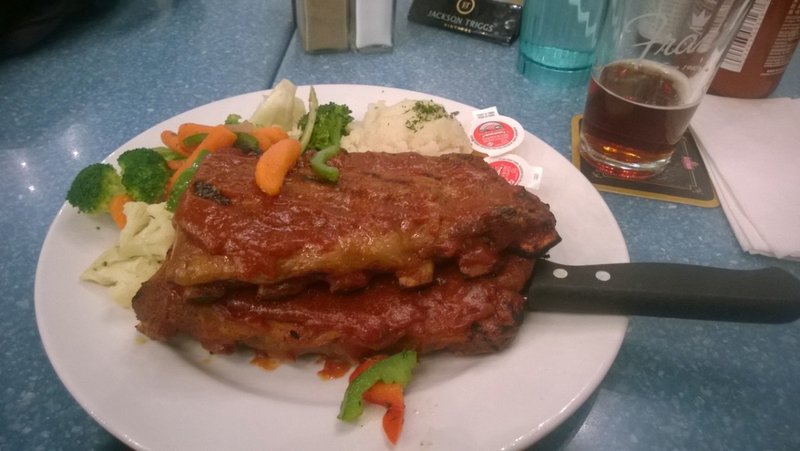 Getting work done was a bit of a trial as Toronto seemed to have a permanent go-slow on the internet - the public library was always rammed, cafes seemed to go slow, the Bora Laskin library at UToronto was transferred into a telephone box while they refurbished, and wouldn't let me use the internet anyway. Oddly enough it was only in the last few days when I tried the rather splendid Robart's library that I got that sorted - I have an eduroam account which has never worked but suddenly decided to leap into life.

I paid a couple of visits elsewhere - a few days down to Niagara, because it is close and really a bit of a cliche. I saw the falls the first evening I was there and then, um, forgot about them. I was staying at the other end of town, in the old part (although I did splurge one night in the Sheraton which is right beside the falls, but I barely heeded them). I was curious about Queen Street, Niagara - it is the old main street, and last time I was there, it seemed doomed: a derelict former department store taking up a lot of space and the shops barely occupied. Now, the department store has been replaced by a nice sort of park and while maybe 35% of the shops are empty, lots of them are quite new business, and there's more coming (although at least two had their closing down signs out). One of the better new businesses is Jeffro's BBQ, although for the life of me, I don't know why I went for stodgy old chicken when he had brisket and ribs. 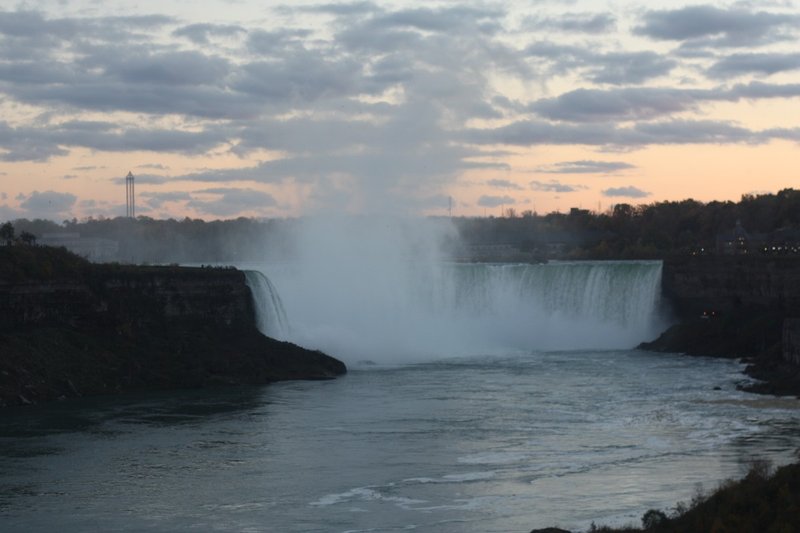 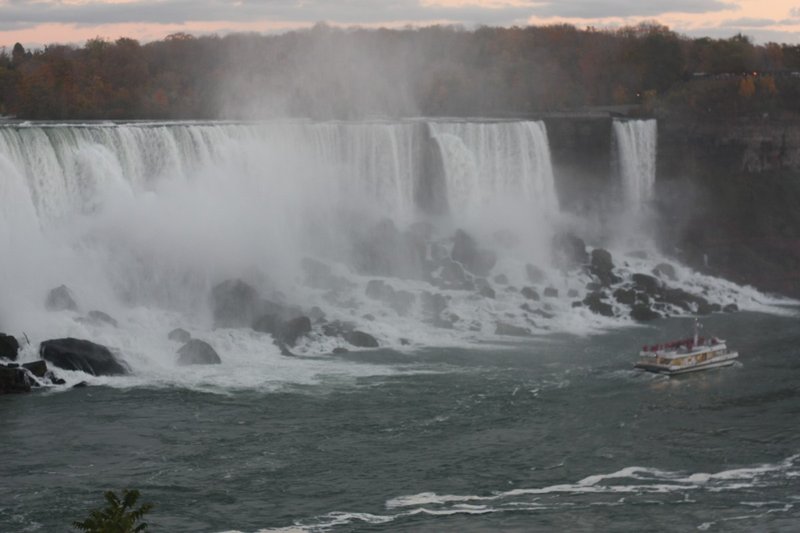 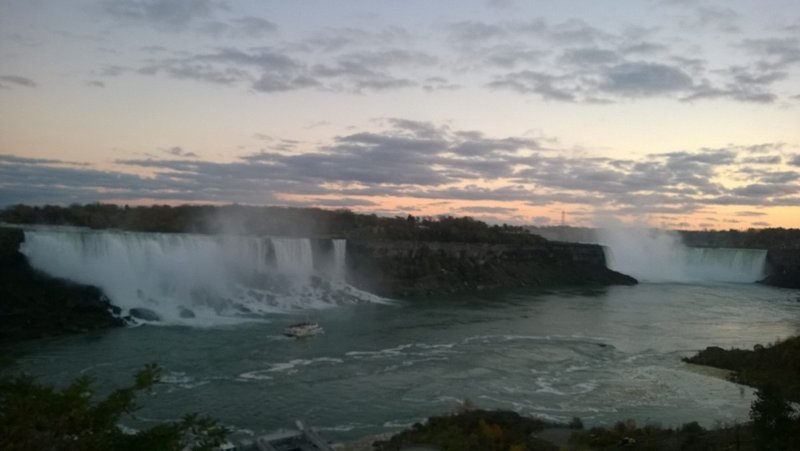 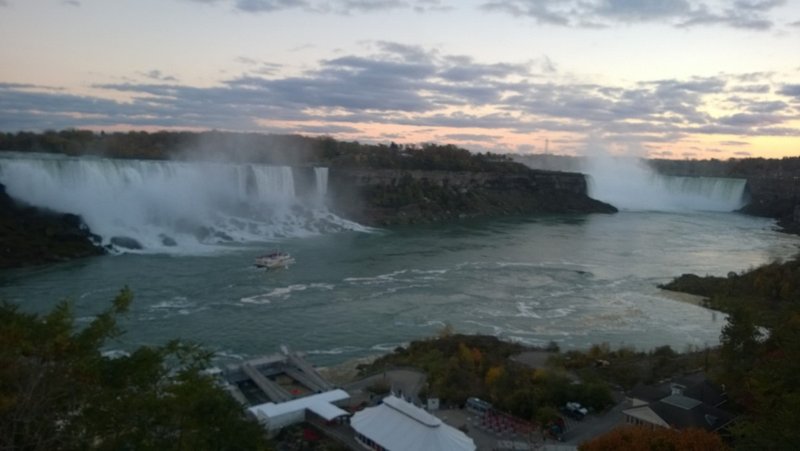 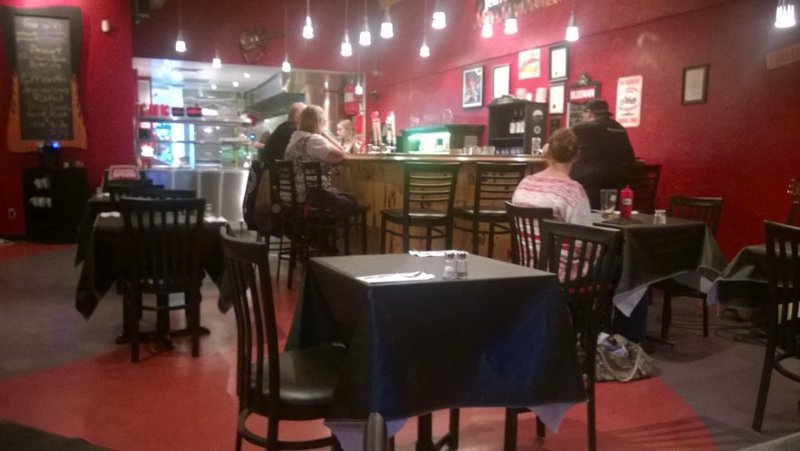 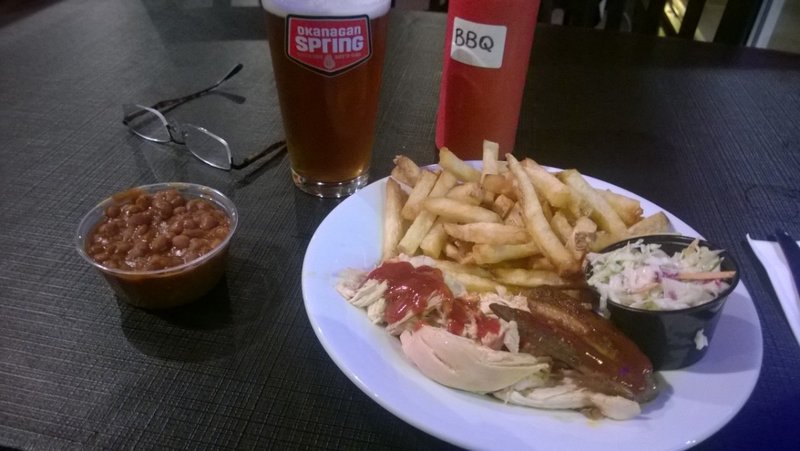 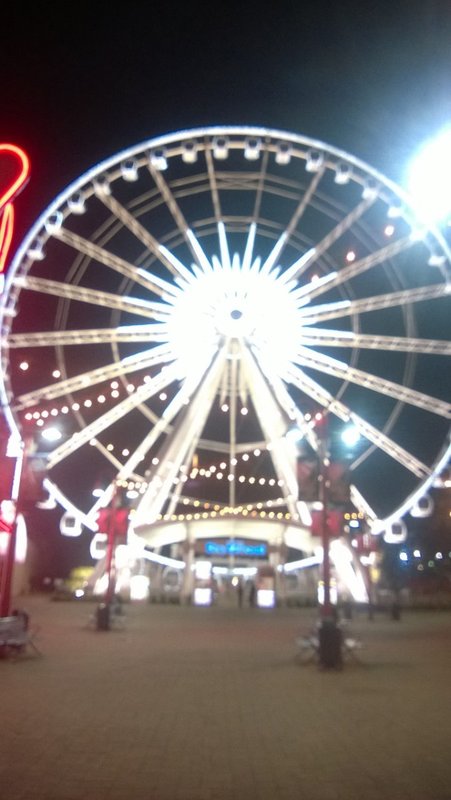 Saving the best for last, my other visit was out the other direction, technically to Whitby as that's where I stayed (and spent a day working in the wonderful Whitby public library), but really to visit some friends in Peterborough. I was picked up in the morning in Whitby and chauffeur driven up to Peterborough, where a promise made a couple of years ago to take me to Costco was honoured. I gave Jim strict instructions that if I looked like I was going to buy something ridiculous because it was cheap, like a tonne of toilet-paper - so impractical to carry - he was to shoot me. We wandered around sampling anything that looked palatable (from the people providing samples, not the shelves), had one of their very cheap but still tasty hotdogs and shopped. I was shown the sights of Peterborough - it really is a pleasant town - and taken out to the Lift Lock, which was the highest lift in the world when built: it lifts vessels 65 feet when the standard was just 7. No action when we were there, unfortunately.

Trent University was also on the agenda - the entire centre campus was designed in the early 1970's by one man, Ron Thom. His design brief must have come from someone like Henry Ford, saying you can use any building product you like, so long as its concrete. 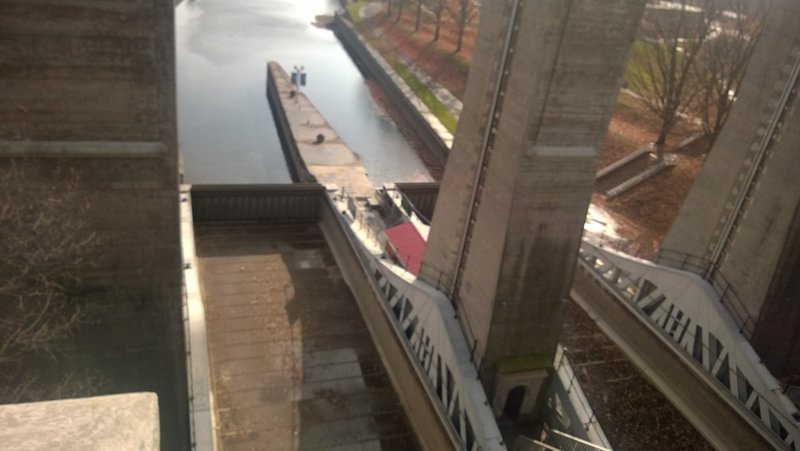 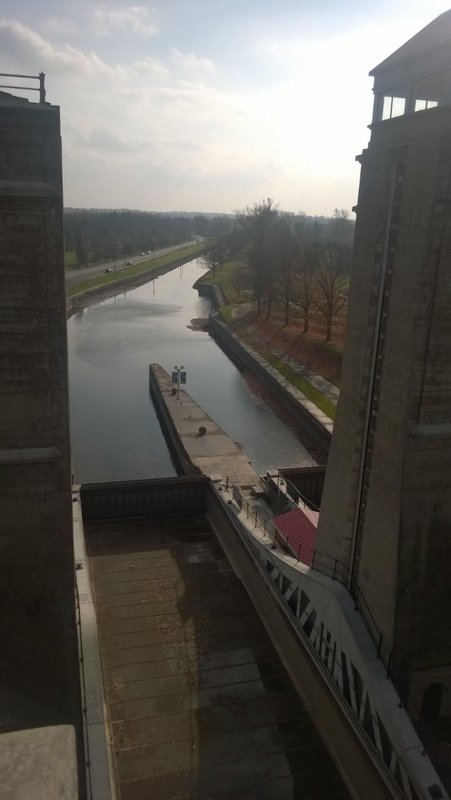 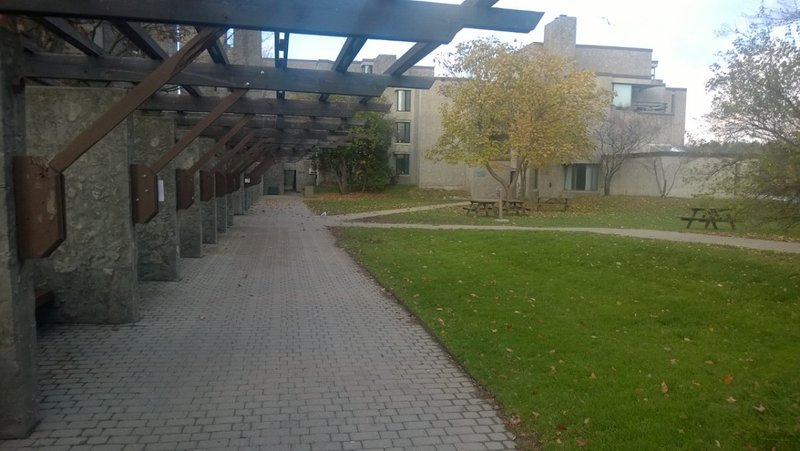 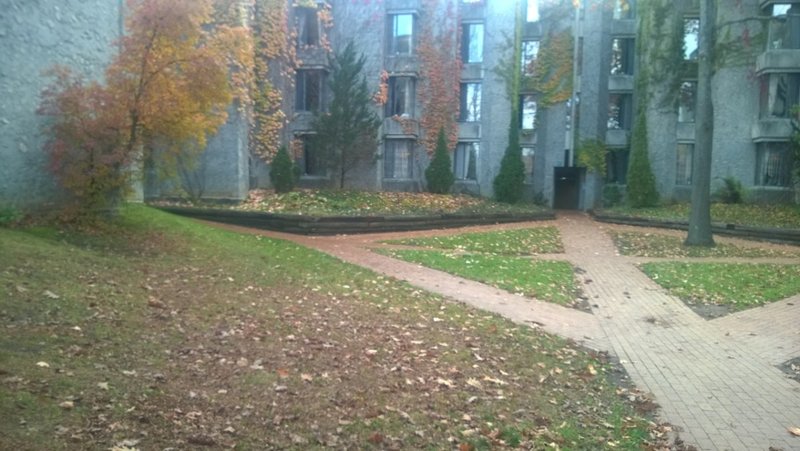 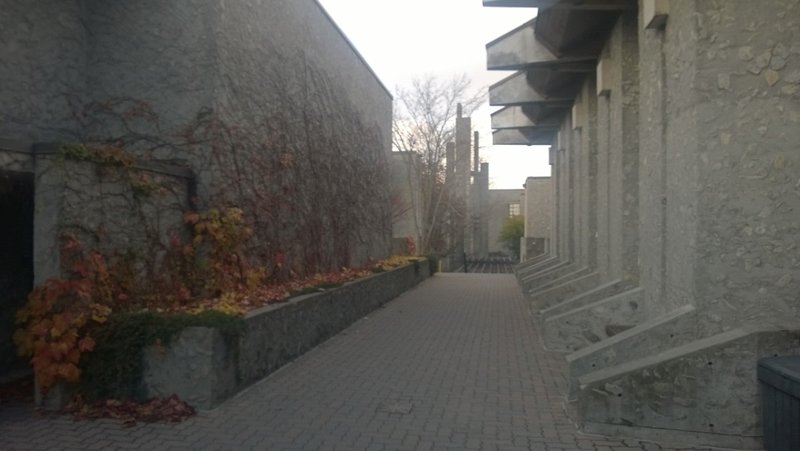 I'm being mischevious - it has a lovely setting on the Otanabee River: its library is built out over the river a bit. Not all like the latest addition to the campus, Peter Gzowski College, which admittedly is not in keeping with the rest of the campus. 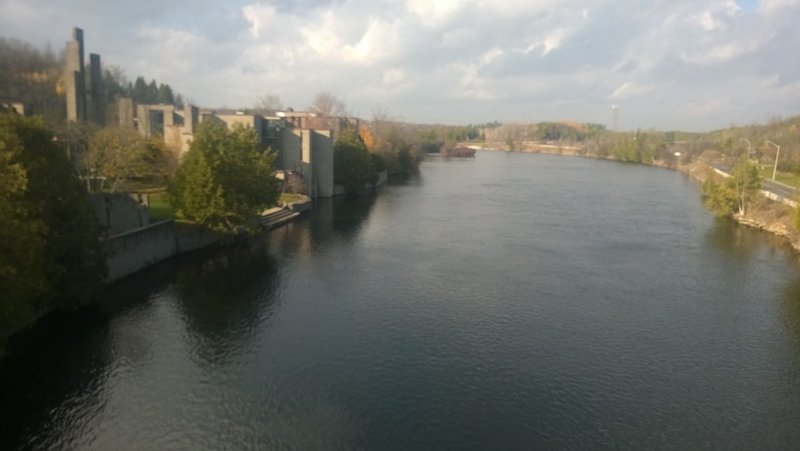 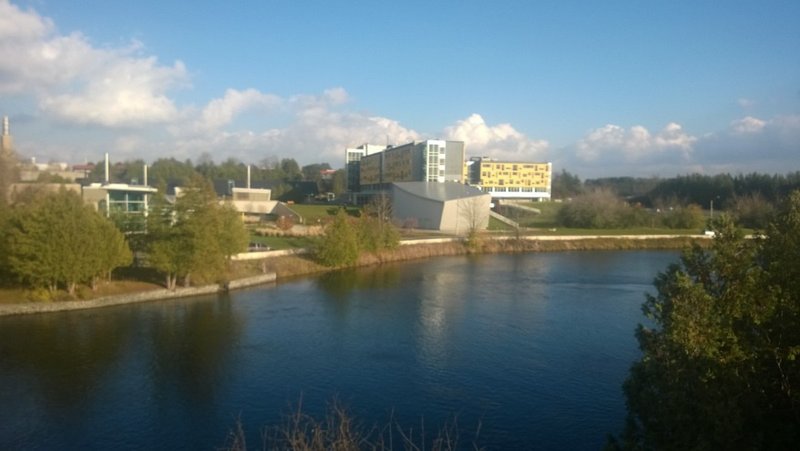 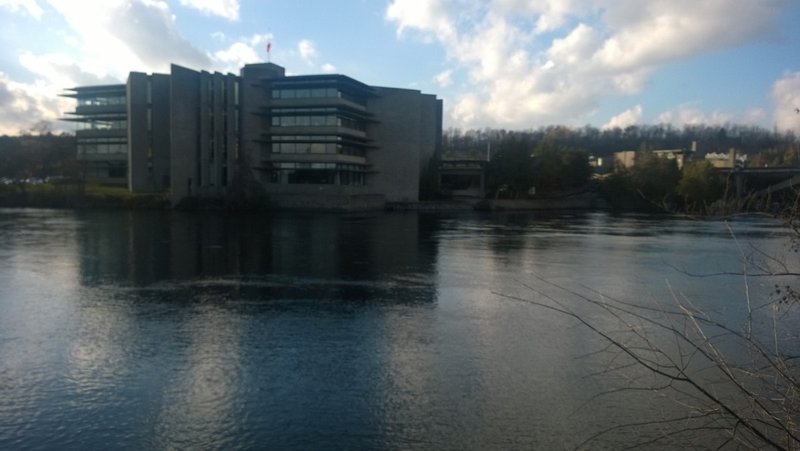 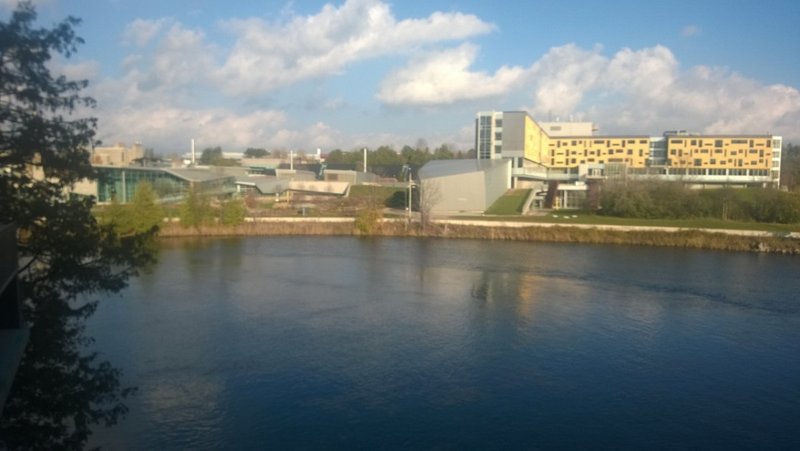 After a detour to feed the family animals, it was time to feed ourselves, which we did on a semi constant basis - with a visit to Horton's, another to DQ, a fruitless journey for a do-nut shop and then to a bar for dinner, where I gained a memento of my visit: a ceremonial pair of chopsticks with which I was supposed to eat my dinner, a lamb curry.

Good times, all day. Thanks guys. 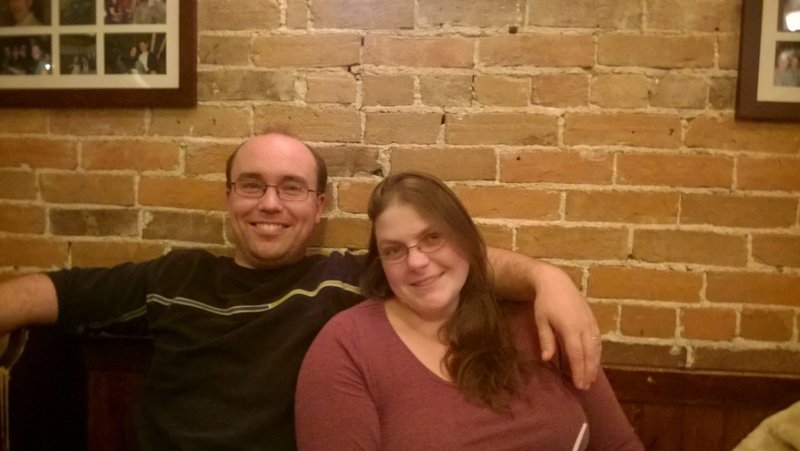 Posted by NZBarry 13:32 Archived in Canada