End of the Sunny (Golden) Weather - Charleston to Oslo

The original plan was to spend a week in Charleston and another in Savannah, as I couldn't decide between the two. With the disruption to my plans, something had to go, and I actually had to make a choice. Obviously I chose Charleston, but then when it came time to leave, things got tricky - late late trains or a really expensive bus: an overnight in Savannah turned out to solve both problems.

The Greyhound station, like the train station, is well out of central Charleston so I had to catch a local bus and walk about a mile to get to it. Once again, the bus was not a Greyhound, some local company carries their passengers and their bus was late in. Eventually we were under way and it was a quick trip down the Interstate to Savannah. I was not able to find a hostel so had a hotel near the river-front, which turned out to be a good choice - an evening stroll along the river seems to be the thing to do in Savannah - and I quite liked the view of the bridge in the back yard. 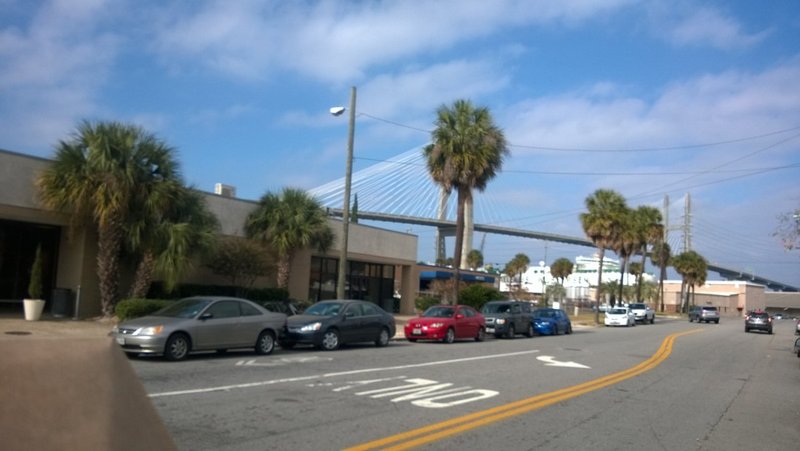 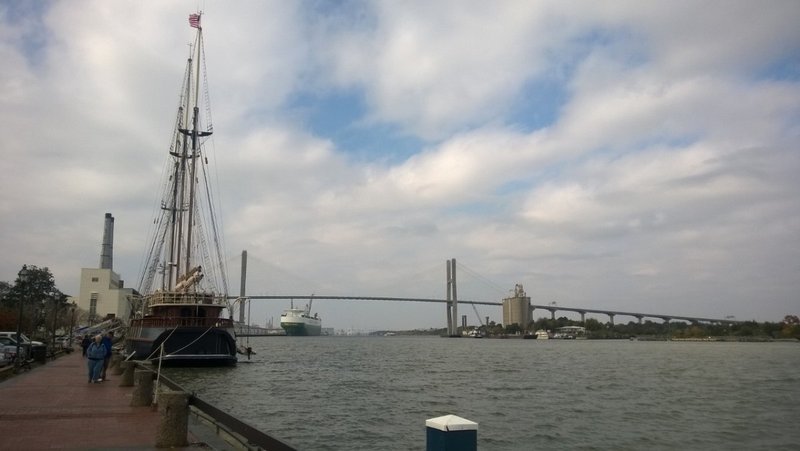 One thing about my hotel disturbed me: they made the claim that the door locks were the most secure they could find and that they locked the outside doors for my safety - I had not felt at risk until them!

I stopped in at the first bar that actually had people in it for a beer - coming out, I had an odd experience as it seemed the world had blacked out. It was just a container ship - they run right along the side of the street. This one is miles away in comparison. 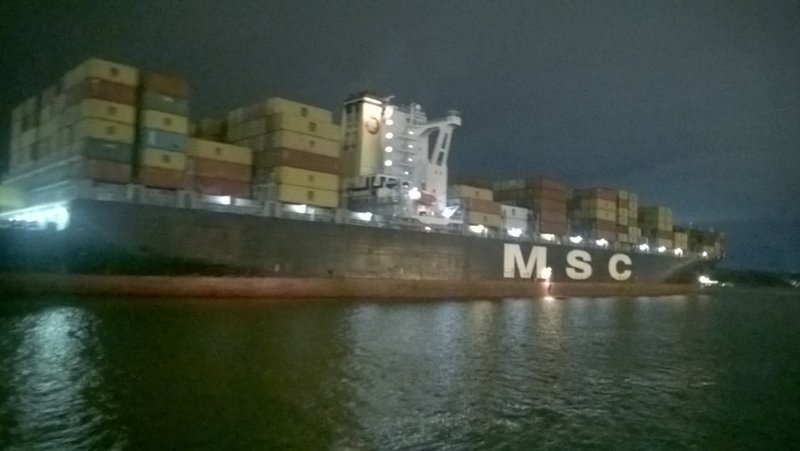 Apart from the many bars and restaurants, there are several shops specialising in candy - I picked one I had seen on TV which had helped spark a desire to come to Savannah, and it is pretty amazing. Apart from candies, they do things like pralines, bearclaws and glazed pecans. There were so many samples to try, I barely neeeded dinner and came out bearing about $50 worth of deliciousness. Yep. $50 on candy. Yep $US50.I did not eat it all at once - still have about half, in fact. 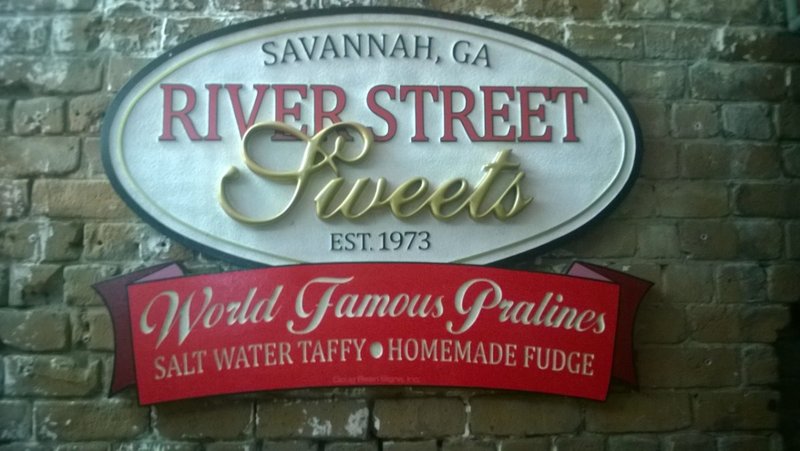 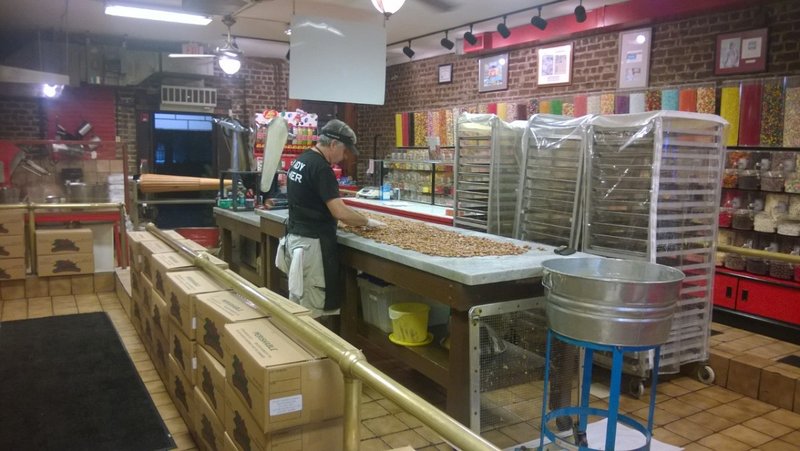 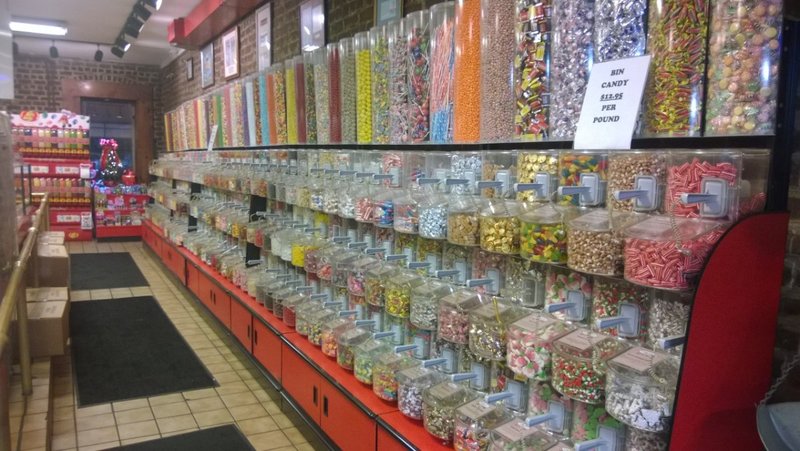 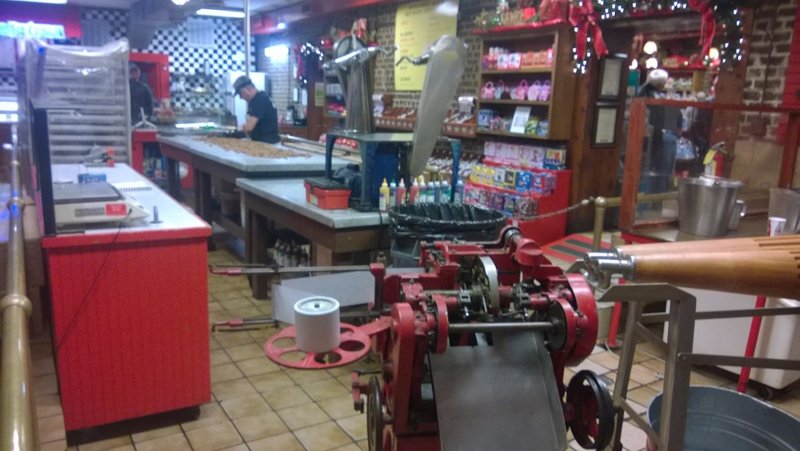 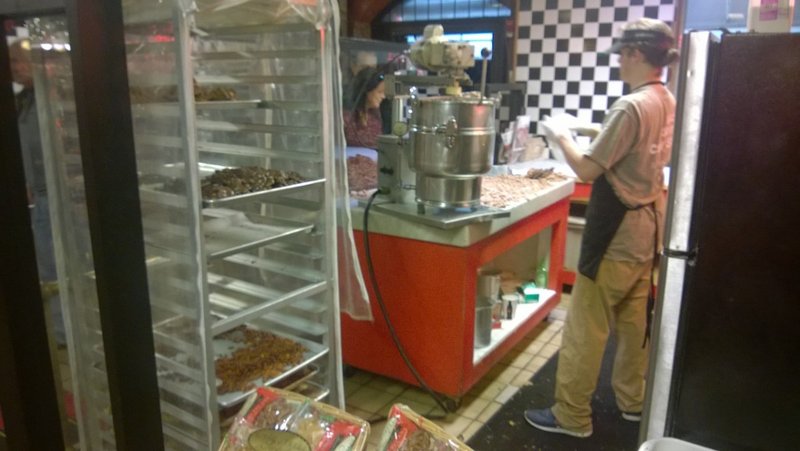 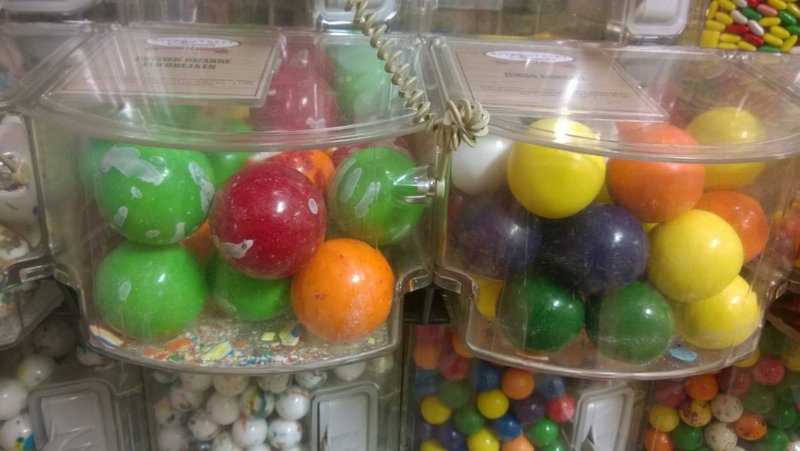 If you ever need something to stop a gob, I think they will do the trick. Pigging out there did not stop me going in to the peanut shop, where they probably have more than a hundred varieties of flavoured peanuts: again, there were heaps of samples, so I tried everything that seemed interesting but ultimately just bought some plain salted nuts. 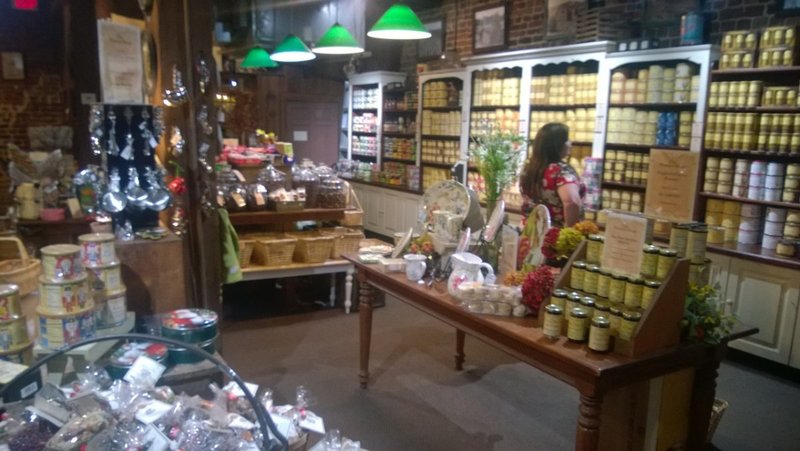 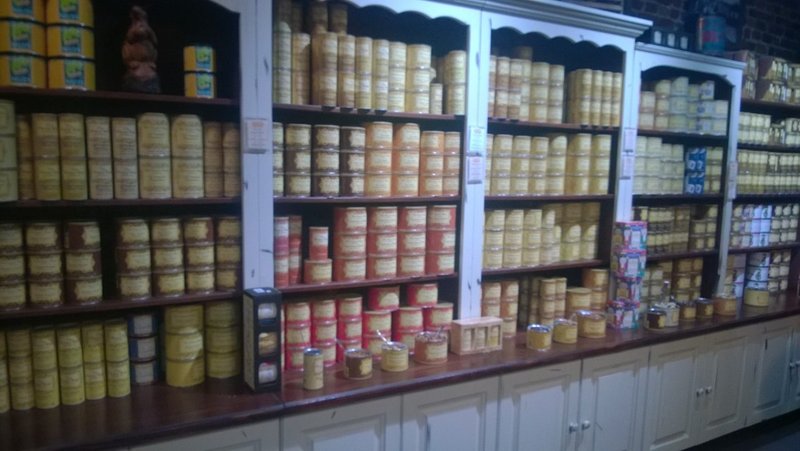 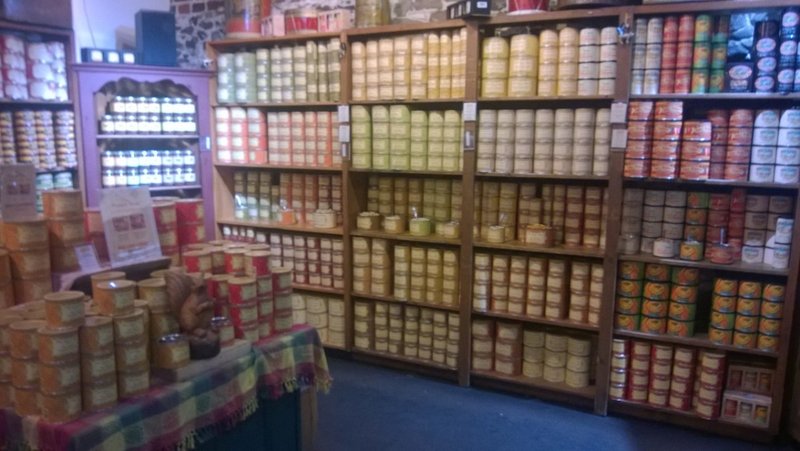 Lots of nuts. I don't know how I did it, but when I saw Candy Kitchen, I went in there, and bought a wee treat to eat as I walked. 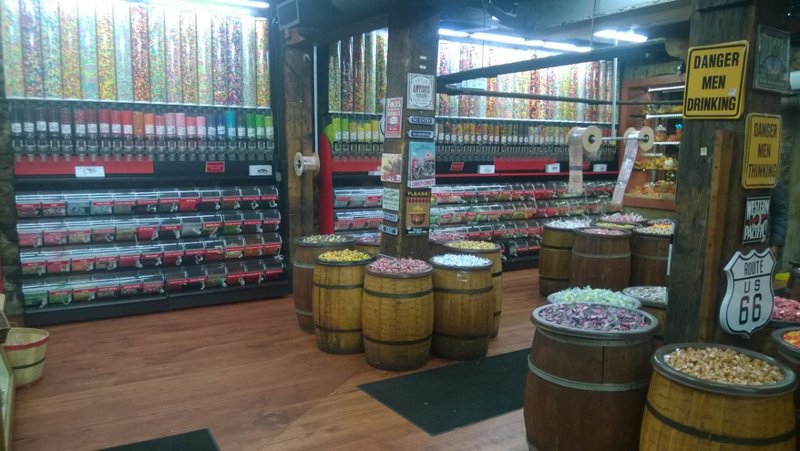 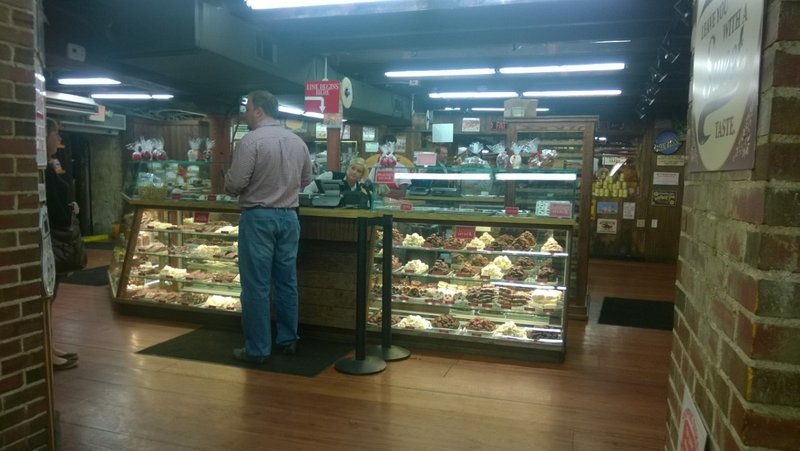 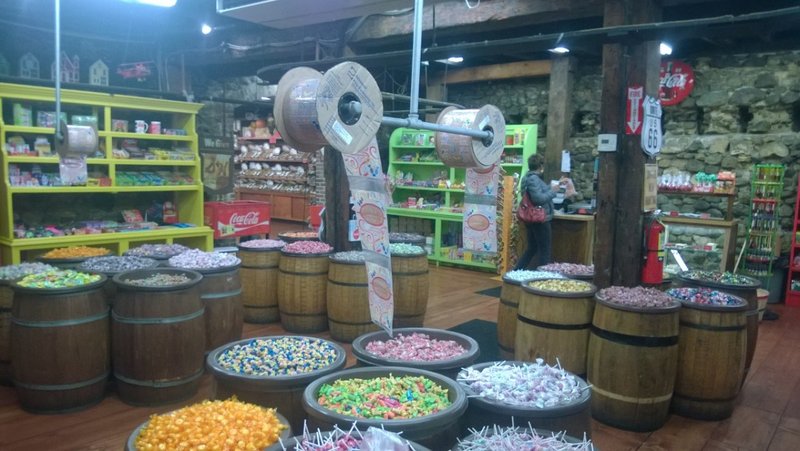 On my walk along River Street, I had noticed that (apart from one very posh looking restaurant), the busiest place for food was Barracuda Bob's so that was the logical place to dine. The chicken wings were not so great, but I finally tried one of the local specialties - shrimp'n'grits. I'd had several conversations with people about grits - I was initially quite keen as they're made from corn, but then someone said they don't taste like corn, another said they taste like oatmeal. Finally, I had quite a long discussion with someone who convinced me that I needed to try them - they're a kind of poor man's couscous, but cooked until they're mushy, almost creamy. They basically provide a base for food, and went quite well with the shrimp, sausage and slightly spicy sauce in the dish I had. Not very photogenic, sorry. 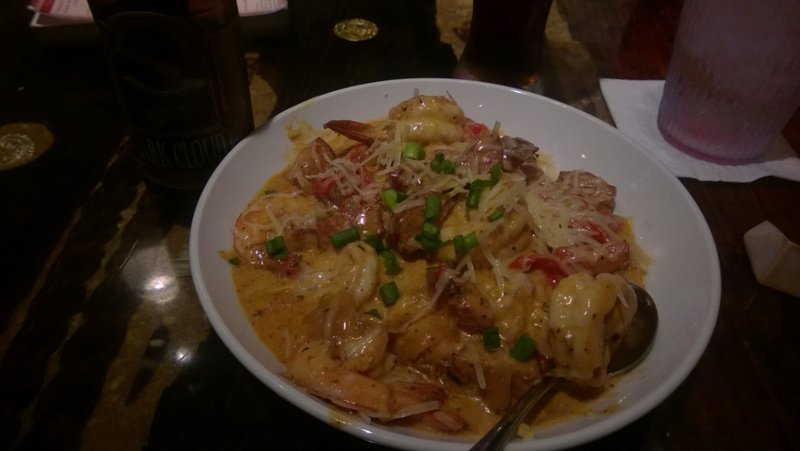 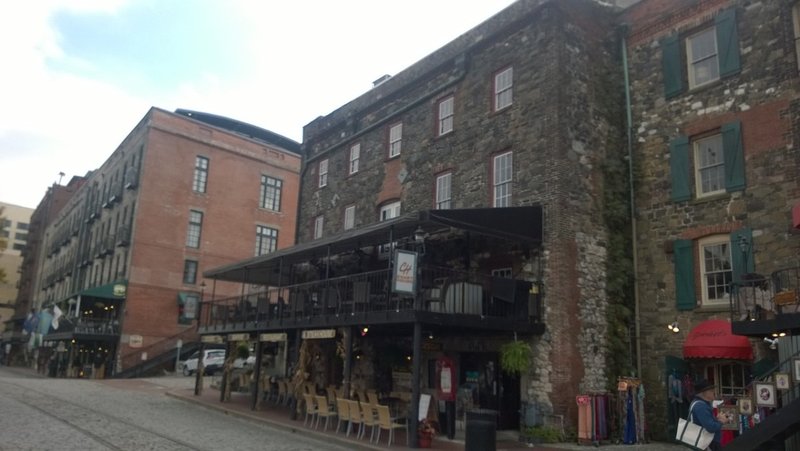 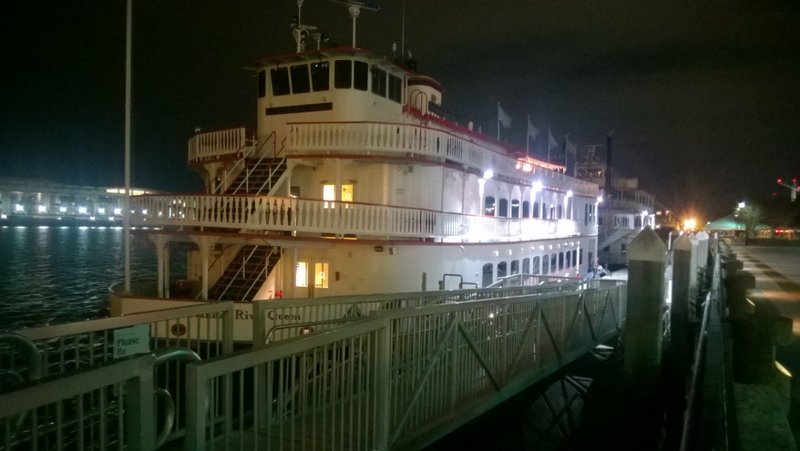 I walked around in the morning for a couple of hours - up the main street and spent some time in a bookshop/cafe where they have found something to do with old law reports now that they're all available online. 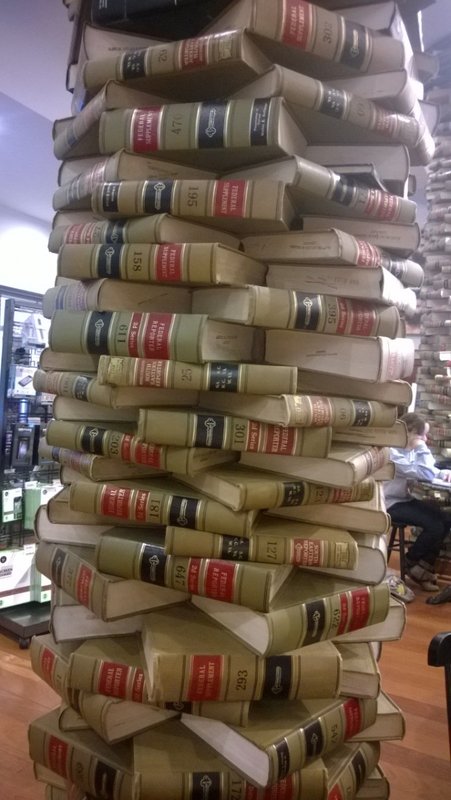 There is probably quite bit of Savannah I didn't see, but the 18 or so hours I spent there gave me a nice taste, and River Street does seem to be where most touristy action is - I've done that now. When it was time to go, I finally had an actual Greyhound bus, with a very grumpy and shouty driver - one poor passenger bore the brunt of it, as he obviously didn't know how to travel the Greyhound way. The bus was an express, and left with maybe a dozen passengers - most of whom left at the one intermediate stop we made, at Jacksonville, Florida. Once in Orlando, I had a long wait at the bus stop before a bus turned up - and it was not the most comfortable of waits. At one end of the bus stop, there were three guys discussing the length of time they'd spent in prison and what would happen if they went back (luckily none of them seemed inclined to do so). At the other, a woman having a long and largely one-sided conversation on her cell-phone - at all times, she sounded pretty agressive, and she'd start shouting, pouring streams of profanity into her phone. The bus I wanted was 30 minutes late so when one finally turned up, I just climbed on - tried to find out where we were going and how close it would get me to my destination, but the driver seemed to know very little about street numbers, would only tell me we were going to the terminal. As it happened, the terminal is on the very intersection I had asked her about, so all was good.

My last night in the US, so I cashed in a hotel voucher and stayed in a Hilton. Just as well, because I could see no sign of any kind of downtown or places to eat, so I dined in. The waitress was pretty and fun - as she was cleaning up a nearby table, I happened to ask her about her accent, which turned into two twenty minute conversations: Aliona is from central Ukraine, and had very fond memories of growing up there, particularly the summer camps where she could go to get away from her family (and they could be relieved of the burden of putting up with her) but does not like the way it has gone, with a departure from traditional values - the girls are just dolls, extermally beautiful but no inner beauty, she told me. Next conversation was about her life in America, her two kids, camping at the parks in Florida, the one visit she paid out of state seven years ago... We parted friends, and I was told to pop in and say hi when I'm next in Orlando. What a great way to finish my visit to the USA.

The other great thing about staying in a Hilton is that I could spend the day of my flight in the lobby using its free computer; getting travel plans sorted, printing out tickets, having a beer so that I was nice and relaxed for my flight. I was at the airport in plenty of time. I was flying Norwegian Air - they have a Dreamliner on the route, but the main complaint people have is that they sometimes bring in a chartered plane that is old, has no entertainment and does very little in the way of food, so I was hoping I'd get the real deal. Yep - a bit of a tight squeeze and my neighbour told me I'd been wise not to pre-buy the dinner, but smooth and decent things to watch, the main one being a dryish Norwegian comedy called Dag, about an extremely self-destructive couples therapist. My neighbour was very talkative, but occasionally he'd forget I wasn't Norwegian and lapse into his mother tongue.

After the lovely weather I'd had all the way down the USA, flying into Oslo was a bit of a shock: a steady 0 degrees and no sun.

Posted by NZBarry 15:57 Archived in USA