I am not exactly sure what my inspiration was for buying a caravan. When I think back to my childhood, I can't think of anyone who had a caravan. Even through my adulthood, I've never really known people with caravans. Sure, when I was 8 or 9, my parents rented a tiny silver version and we did the sort of trip all of the Destination Experts on Tripadvisor would say was mad. Two parents and four kids (I was the oldest) in something that was probably no more than 14 foot long, from the top of the north to the far south in just a few days of long driving. My only distinct memory of that trip plays no part in my acquisition: being rolled up in a tarpaulin and sleeping outside on a very cold night in Greymouth. I don't see this journey as creating a thirst for buying a caravan.

If there was any particular cause, it was probably a very slow evolution from my first visit to Takaka, many years ago. I had gone across by bus and stayed in a backpackers, but was very envious of the freedom of those who had vans - they could go anywhere and sleep where they liked (this was well before the days of restrictions on freedom camping). So, I bought a van, not a campervan, just a van, an old Ford Econovan with a couple of caravan squabs in the back. I called him Webster and, yes, we went to Takaka one summer and explored many places and I slept whenever and wherever the need arose. He and I saw most of the country together but our ways parted under unfortunate circumstances some 8 years ago.

Apart from that childhood trip, I have only actually slept in a caravan twice. Once, I was doing a road trip from Adelaide to Sydney via Broken Hill and came across a town called Bogan: it seemed curiously appropriate to go to the camping ground and hire one of the static caravans they had onsite for the night. Then when I returned from a year away, in 2015, I did the same in the Takapuna Beach Motor Camp. Having been out of the country for a year, I had a wee plan to spend this summer doing a roadtrip around my own country and thoughts turned to a suitable vehicle. I wanted more comfort than an old van would provide, and was very tempted by the idea of a campervan. It is hard, however, to get a cheap one with a high enough ceiling to allow me to stand up. In addition, it would mean that every time I wanted to move, I'd need to pack up - bugger that! Thus was born the idea of getting a caravan.

This created a condundrum slightly easier to resolve than the question of whether the chicken or the egg came first: ought I buy a caravan and then the vehicle with which to tow it or would doing things the other way round be better. Obviously having a tow vehicle would make the purchase of a caravan easier, while the reverse was not true. Cheap caravans are necessarily old caravans and old caravans are necessarily heavy caravans, so I needed something with grunt. I looked briefly at utes and my brothers have Toyota Surfs and Nissan Terranos, but my selection process took me to a choice between a Land Rover Discovery or a Jeep Cherokee: the latter struck me as more reliable and easier to fix than the former, so a Jeep Cherokee it was. Hardly any came up in my home town of Dunedin, and only a handful in the South Island. Those that did were noticeably pricier than North Island Jeeps. Finally, 2 days before my birthday and just before I had to go back to teaching, I found the one I wanted - in Kerikeri. You can't get much further from home than there and still be in New Zealand. After a bit of anxiety, because the seller claimed to have "stuffed up" in accepting an offer I had made, he finally on the Thursday morning agreed. I had to arrange a last minute flight to Auckland (luckily most of the demand was by students returning to Dunedin so it was still quite cheap) and then a bus to Kerikeri to meet my vendor and take delivery. He was surprised that I would take the Jeep in whatever condition (I was equally surprised to find my supposed tow vehicle had no tow bar) but a deal's a deal: I transferred the money to him and set off: my first destination was the first of many petrol stations. 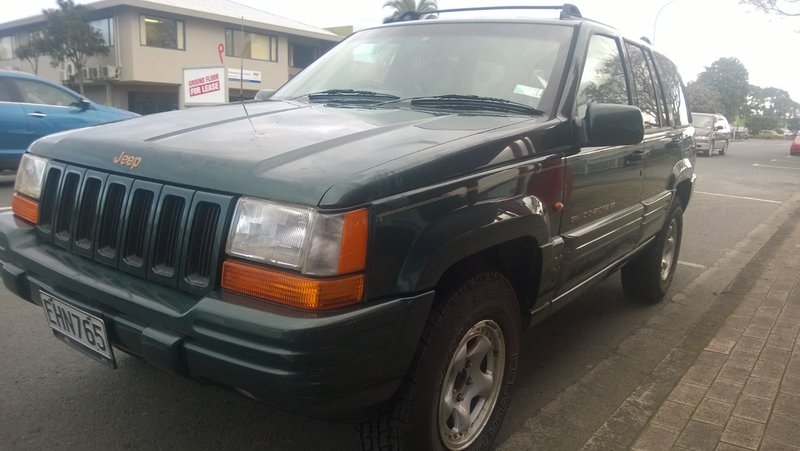 Kerikeri is not far from where I spent my teens, so I took a memorial drive out the gravel roads to my family's former farm. On the way, I learnt the hard way that the Jeep doesn't much like gravel roads: we ended up exiting one corner sideways. Not a good start. This is the house I lived in (and a piece of the farm I lived on) from about the age of 11 until I went to University: my parents actually moved the very day I started there. 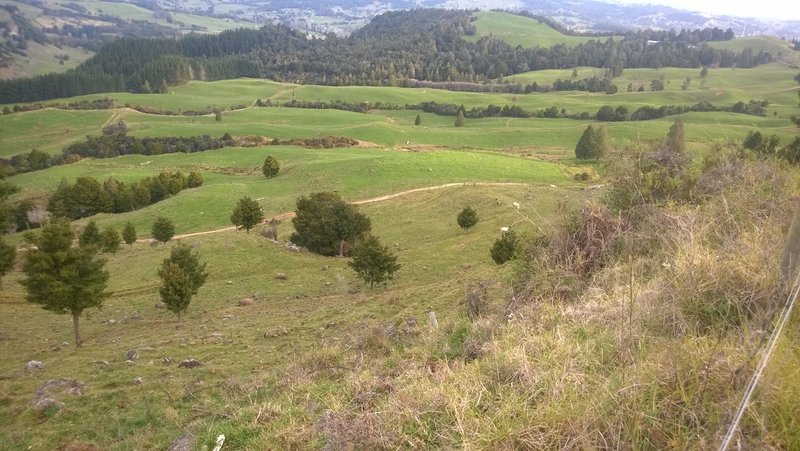 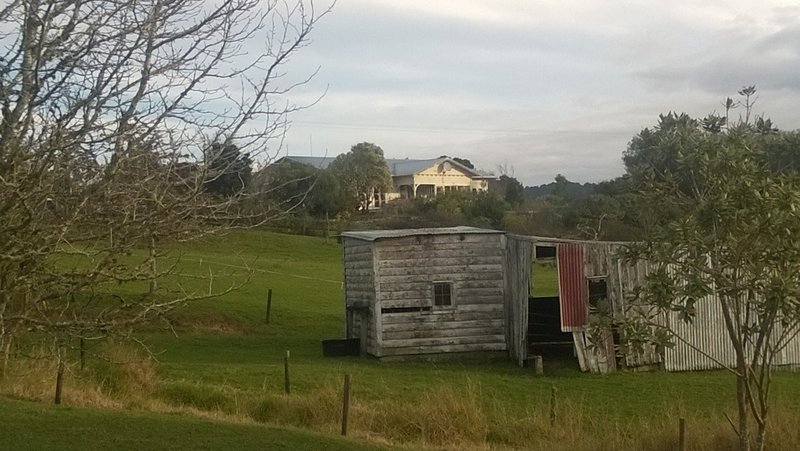 I went to the local school for 5 years, so decided to see how the old place is looking: a few expansions but otherwise, much the same. My Form 1 year was spent in the second classroom from the right. The town itself had lost a couple of shops (it never had many to start with), but it was good to see it had retained its butchery and that the local service station seemed to have developed a pretty useful general store. 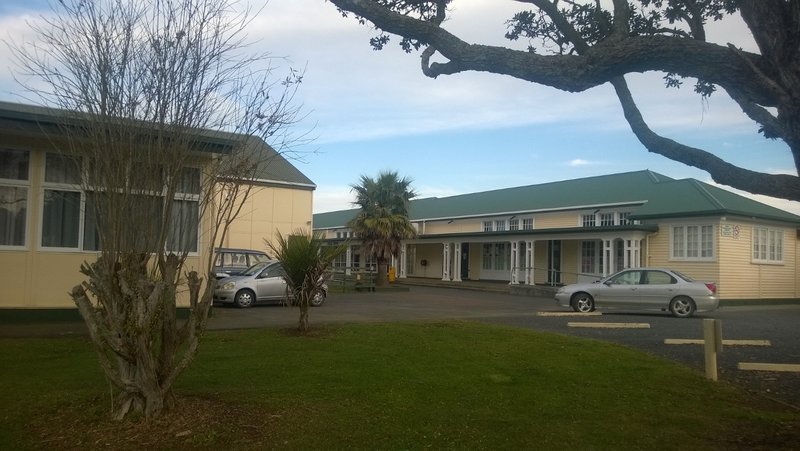 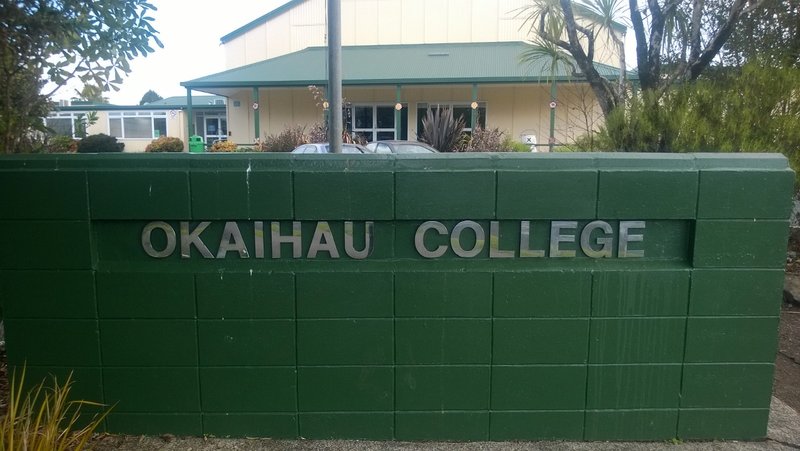 Now for the caravan. I spent a couple of months at least looking on trademe and had up to around 30 caravans bookmarked. I only really had two requirements - it was not to be grotty and it was to have a permanent bed with a separate table. I looked at one near Balclutha but it tended towards the grotty, and had all its air vents sealed up with sticky tape to prevent flies getting in: removing them was imperative but would leave unsightly marks and cause difficulties if I wanted to paint it. Then the perfect caravan came up just over the hill from my house - a mid-70's Zephyr (made right in Dunedin by Modern Caravans) which had its beds stripped out and replaced with a proper bed at one end and a wee cafe style table at the other, with 1970's "leather" and timber kitchen chairs. This caravan had a bit of a sad history: the owners had bought it, only to find that they had been lied to, and it needed serious work to replace rotten framing and the like. They set to and did all that work, it took a couple of years, but before they even spent one night in it, their employer transferred them to Sri Lanka. Nonetheless, I bargained them down on the price and the deal was done: I had a caravan! 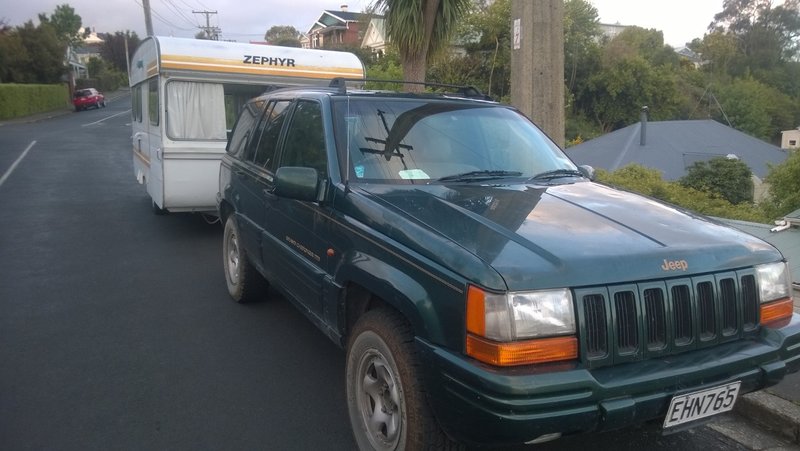 My first trip in it was just an overnighter, down to the top of the Catlins near Owaka the weekend after I took possession. Of course, I had to get a few bits and pieces for it, and about 10:00 p.m. I was working out what I needed when an ad for Briscoes (who else, right?) came on, saying they were open till midnight. So, I went in to get some sheets and a duvet but somehow came out with more than $400 worth of stuff - caravanning is evidently an expensive hobby. The trip to Owaka was uneventful - the caravan is heavy so my speed was reduced somewhat but it tows well and rarely wobbled. The plan had been to stay at the old hospital there but it was closed, which gave me my first learning experience. I tried to back around into a sidestreet, but the caravan brakes locked on so fiercely when I started to reverse that all 4 wheels on the Jeep were skidding uselessly. I had to belt the handbrake with a bit of wood to make the brakes release, and there was no way my caravan was going to allow any reversing. Luckily, there was just enough room to do a U-turn and find another caravan park - the rather lovely Pounewa Motor Camp, which has cute cabins right on the water's edge. 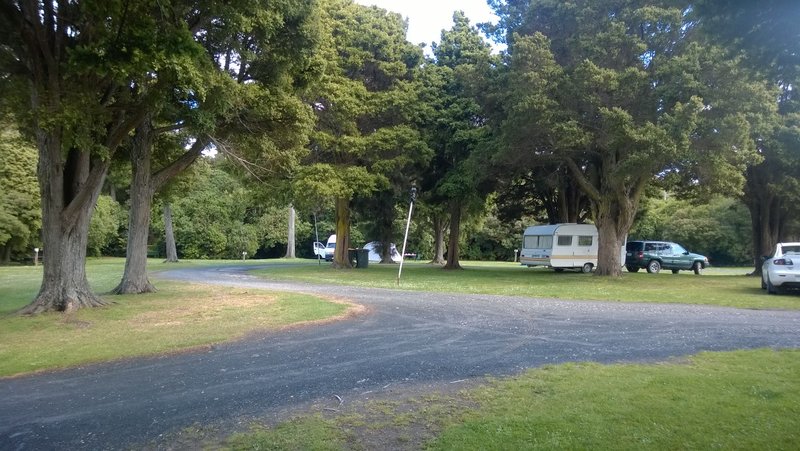 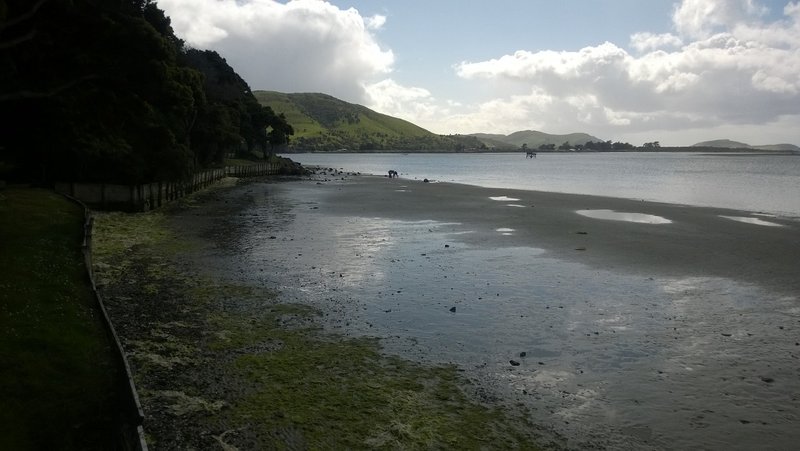 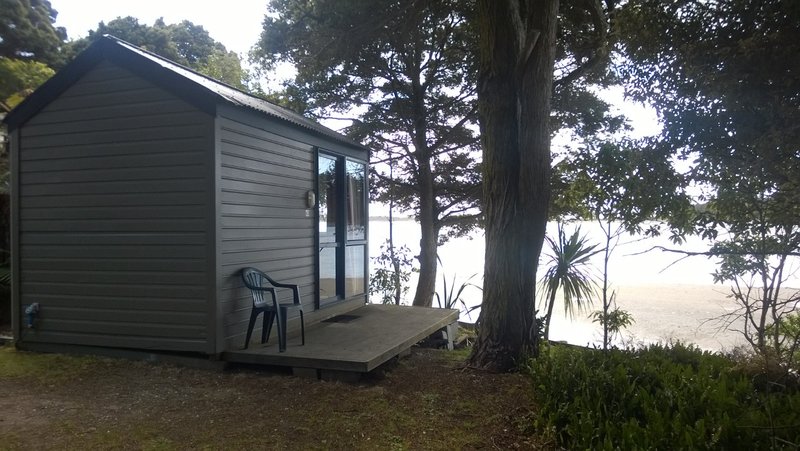 Luckily there were spaces I could just drive on to without having to reverse, but I couldn't have a caravan that would never go backwards so went on to the motoring forum on trademe to find out what the story was. It turns out that the braking system has the caravan slide up a shaft connected to the coupling, which is what it does when you try to reverse, but that there is a doohickey (I think the blokes on trademe called it a pawl) which can be deployed to stop this happening. 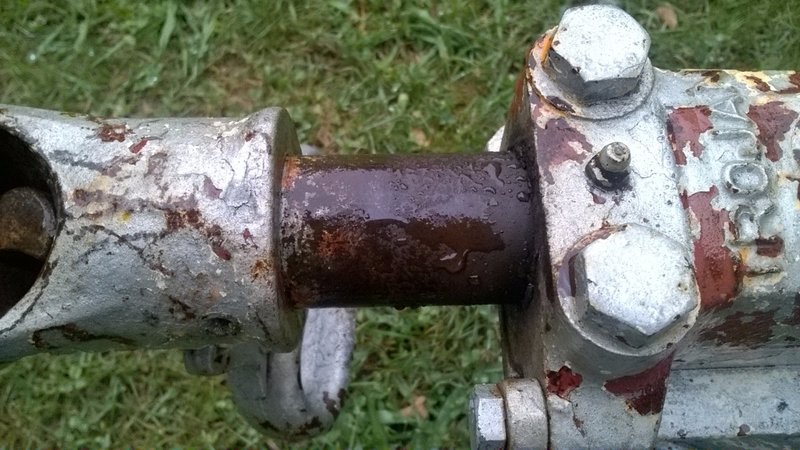 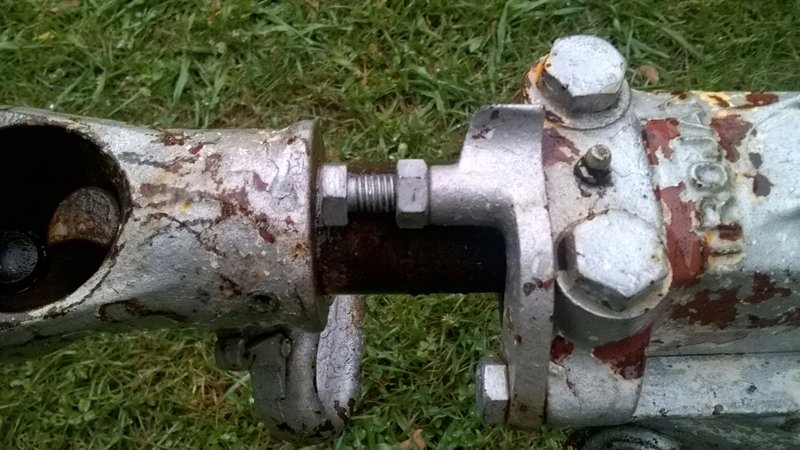 Problem solved. I had a very nice day driving down the Catlins road as far as the Niagara cafe (leaving the caravan on the main street of Owaka) and back home again. My next trip was a bigger trial run: I had a conference in Christchurch, so stayed in the South Brighton Beach Caravan Park and then left the caravan in storage in Timaru to await further adventures.