Having an accidental day in Westport had its advantages. I could stock up for Christmas in the supermarket. I could buy hardware to make repairs to my caravan (window flapping open) in Mitre 10, then go back to buy Christmas lights with which to adorn the caravan. Most importantly, I could visit what is probably the best cafe on the West Coast - Westport is sadly depleted in terms of cafes, but the Bayhouse at Tauranga Bay is still going strong. After a quick look at Carter's Beach 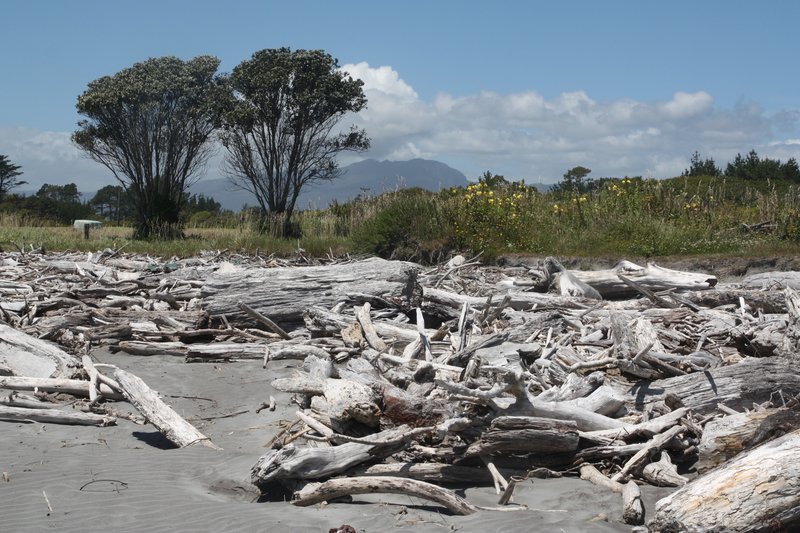 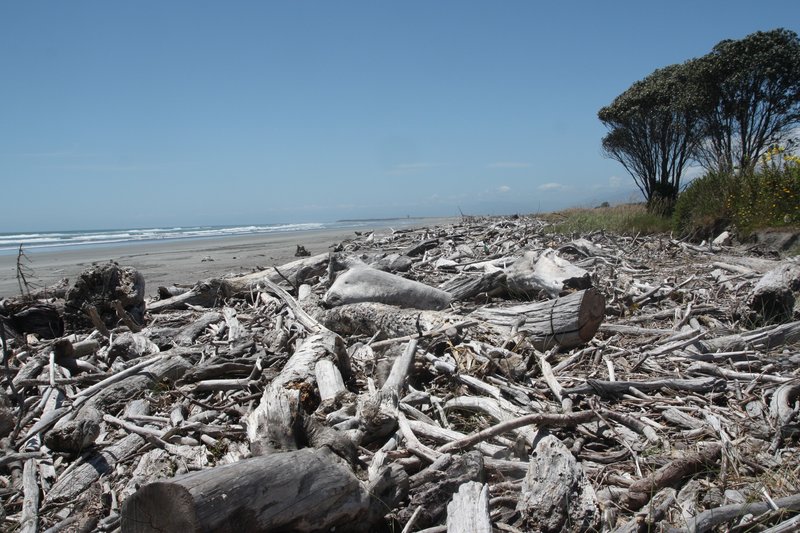 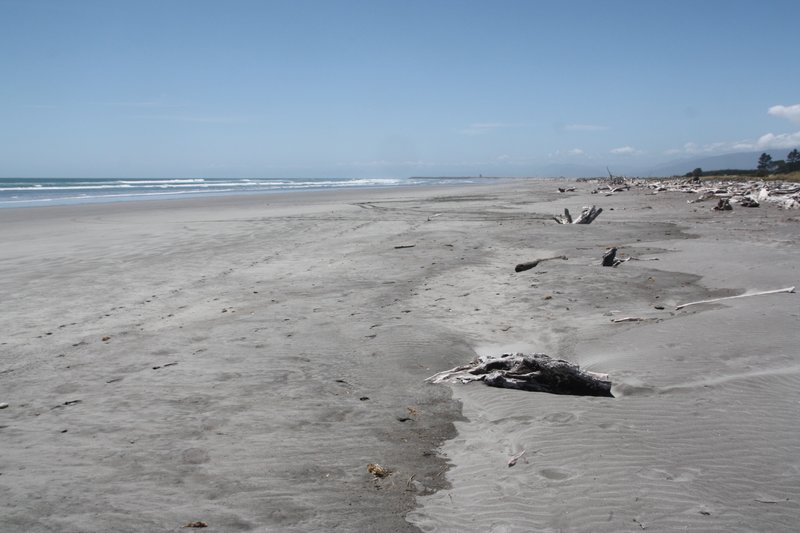 I made my way there and had my first taste of Punakaiki Pilsner, which is made in Westport and has apparently won awards, although I have not been able to identify which one(s) - my source at the Punakaiki pub could only say it was something to do with a wine and food thing. It is very tasty, with a touch more hop than the traditional pilsner. I couldn't just drink beer, so also had a chowder, as I (correctly) thought they'd know their way around seafood. 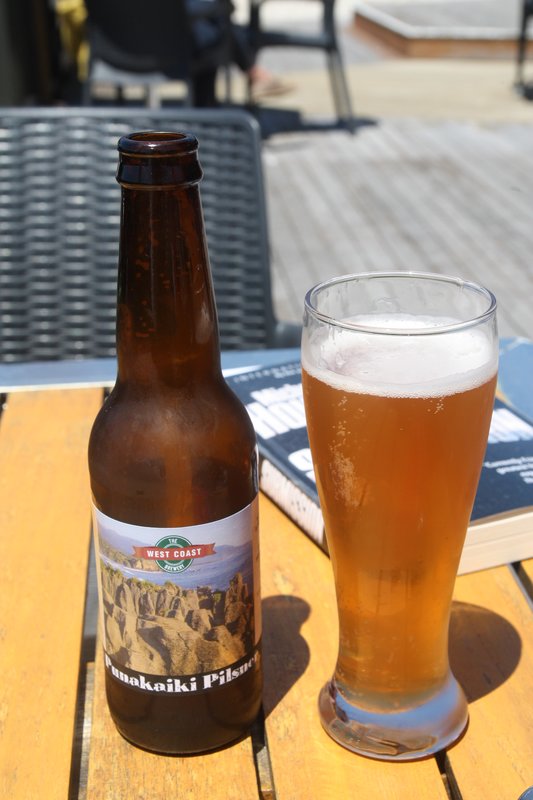 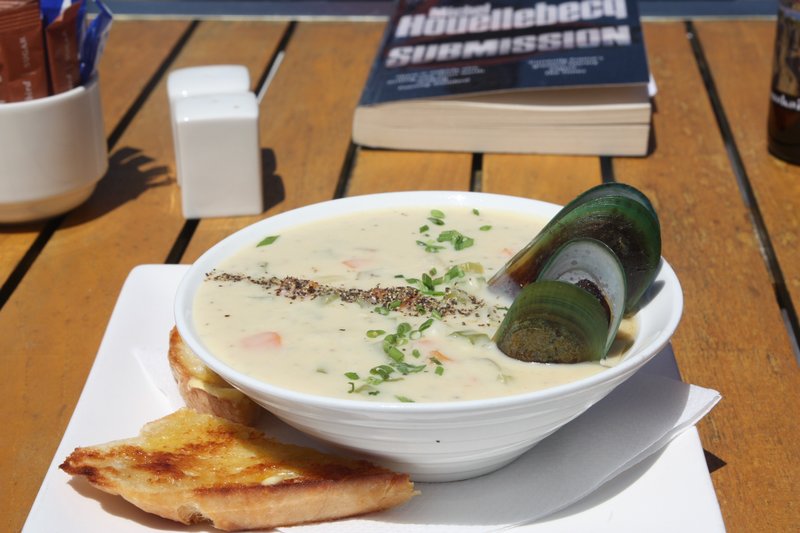 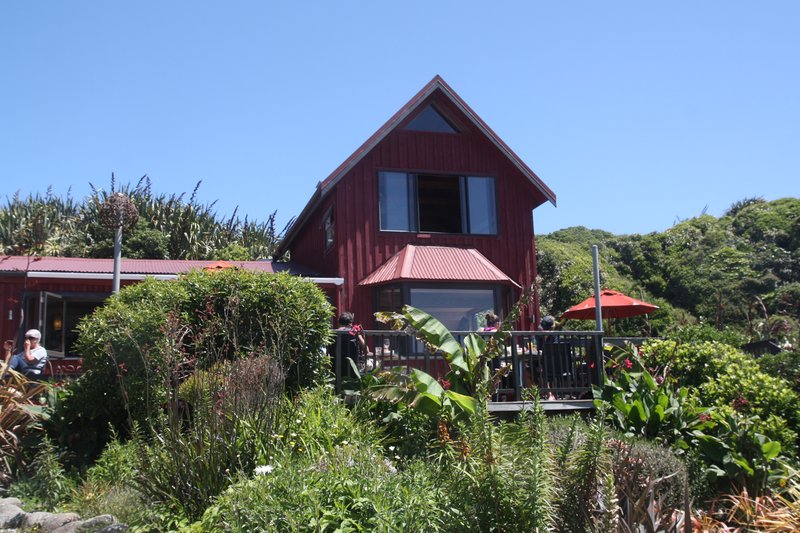 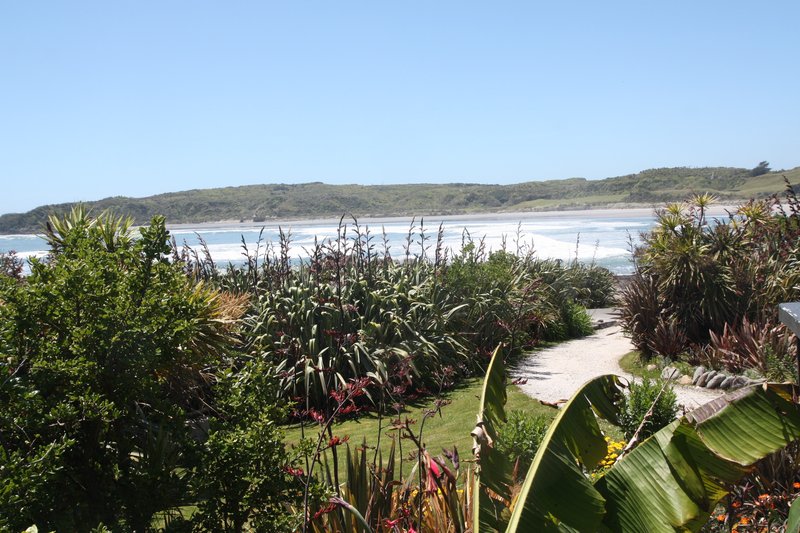 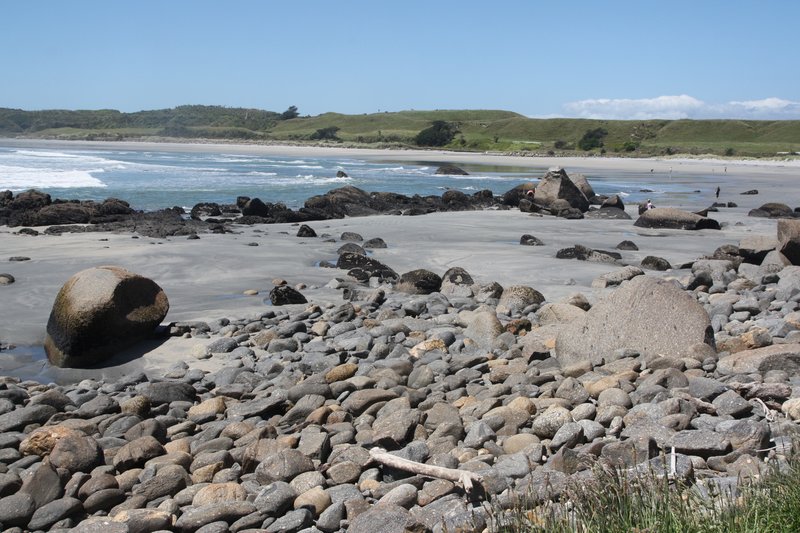 Another cafe worth knowing about in this area is the one at Charleston, about 25 km south of Westport, which is attached to the Adventure Underground Tours - I was in here 3 or 4 times as I drove up and down this stretch of road: it is in a cool building. 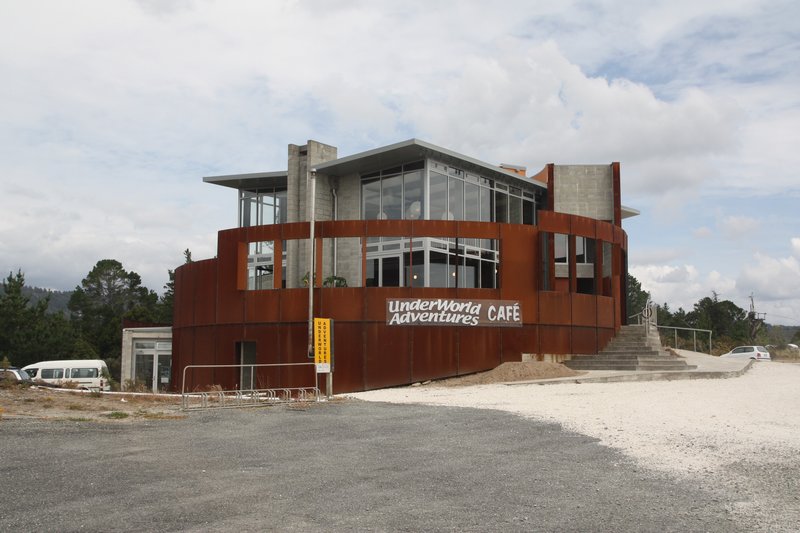 I spent Christmas Eve, Christmas Day and quite a bit of Boxing Day in Punakaiki, without much of a plan. I looked at the beach behind the camping ground, several times. 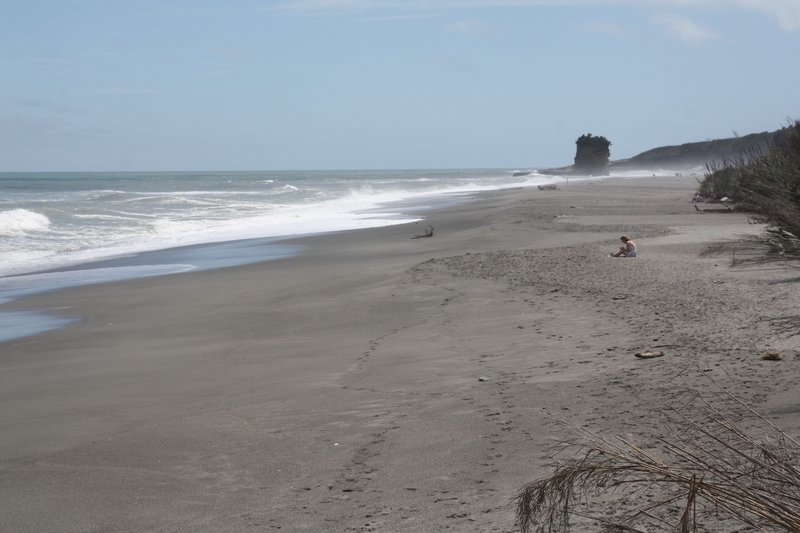 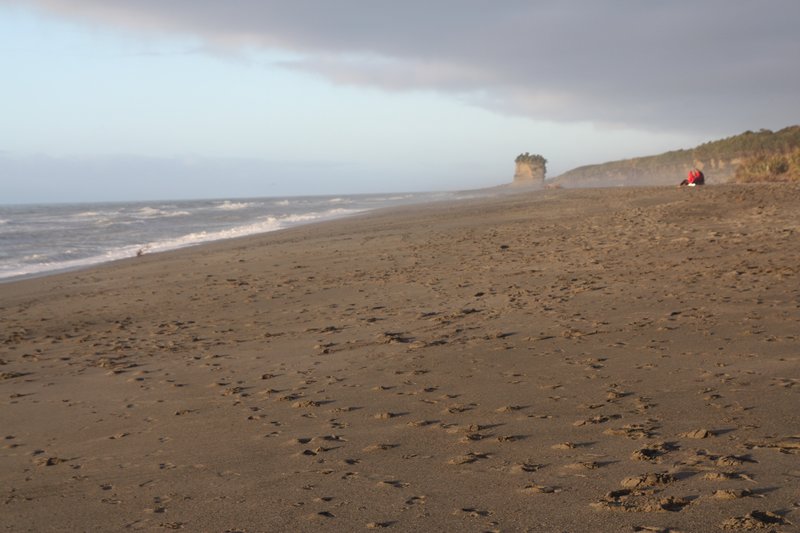 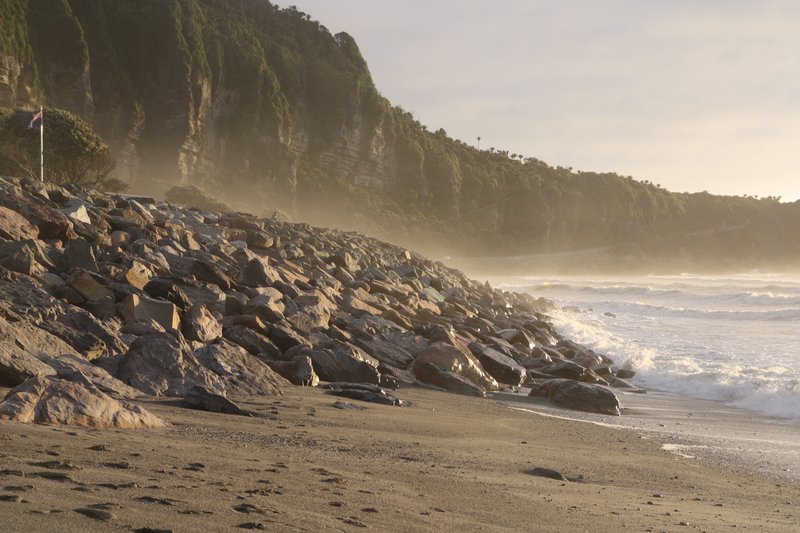 I have decided that living one's life according to a few rules helps provide shape and certainty to life and came up with one rule for living while in Punakaiki: every time in my life that circumstance takes me through Punakaiki, I am to stop in at the pub and have a Punakaiki pilsner (you have to start somewhere when setting up rules for life). It is a good, casual pub, right beside the camping ground, so I popped in each day I was there.

Of course, I went down to look at the Pancake Rocks - this was on Christmas Day. The cafe there was open, but its prices are high and augmented by a holiday surcharge, so I just had a coffee while I enjoyed access to cellphone coverage and went for a wander on the rocks. 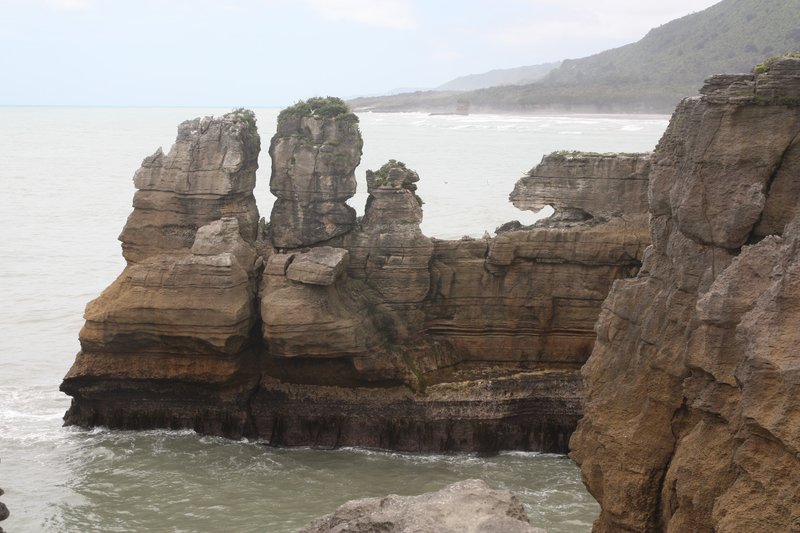 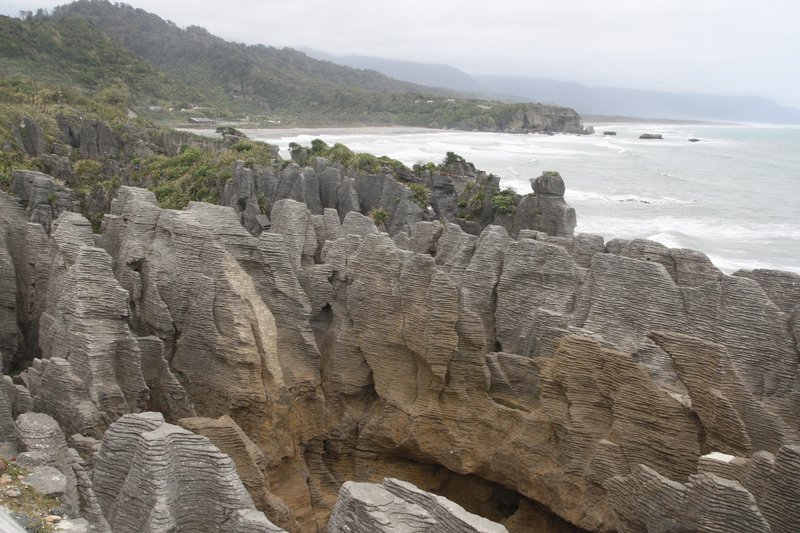 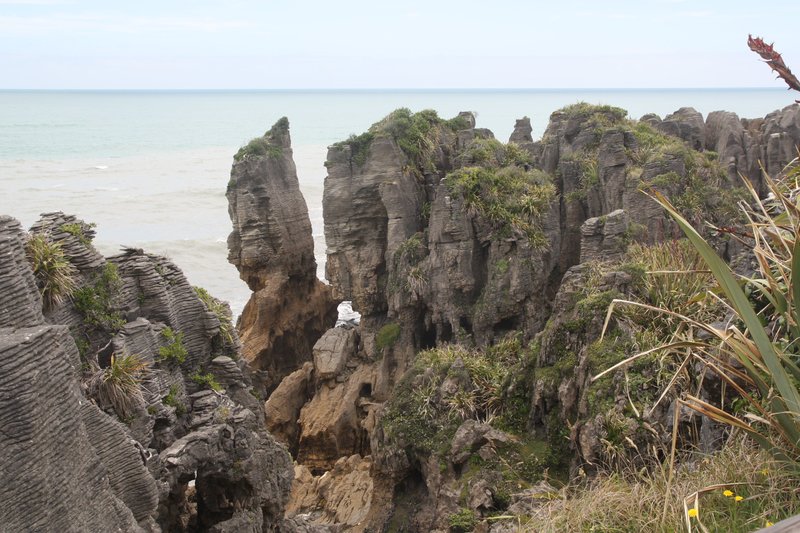 I didn't feel very Christmassy or energetic, so spent the day reading Michel Houellebecq's Submission and watching The Bridge. I took a late afternoon walk around the camp and its environs before droving up to Bullock Creek. It was dry and very stony - I tried driving along the creek bed a bit, but the stones became too big for comfort. Christmas dinner was not much - chips in the pub followed by a toasted sandwich (it did have ham in it, as a nod to the Christmas tradition). One thing I noticed about the camp was that although it was very busy, all but about three hardy souls in caravans were in campervans. 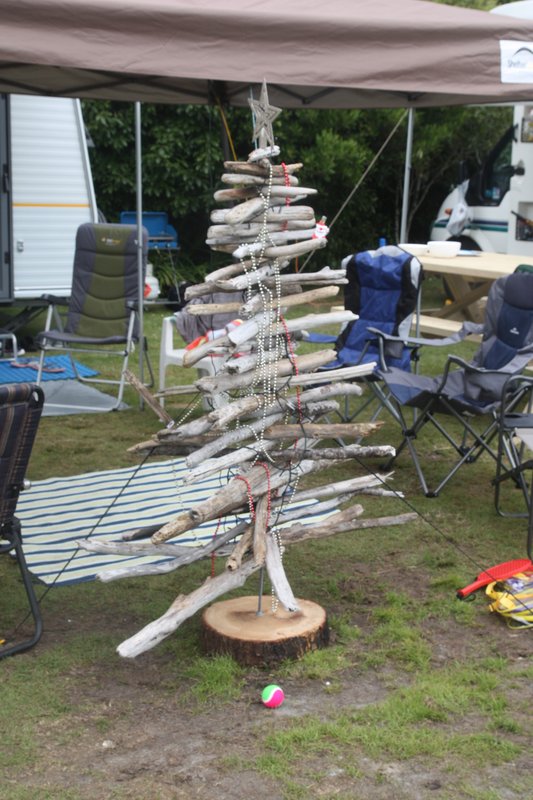 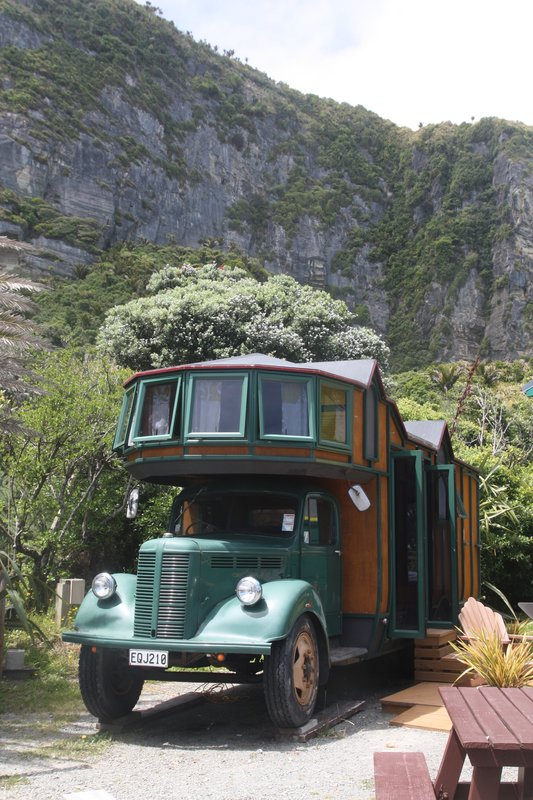 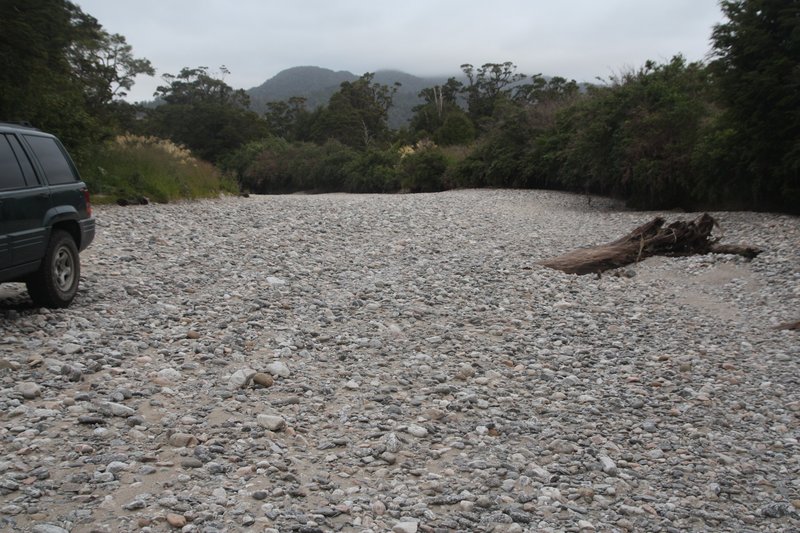 Next day, I was feeling like doing more - I'd walked about 7 km before I'd even had a cup of tea. This was a walk up the Porarari River. It has a well formed track which takes you in to Cave Creek (it also loops around and ends up at the Pancake Rocks). There were a few people out walking and a couple of runners but very peaceful - the main interruption was from people talking to each other in canoes on the river. For the most part, they were obscured by bushes, but when I did get to see people canoeing, I started to think it looked so peaceful on the water that I wouldn't mind having a go. One day. 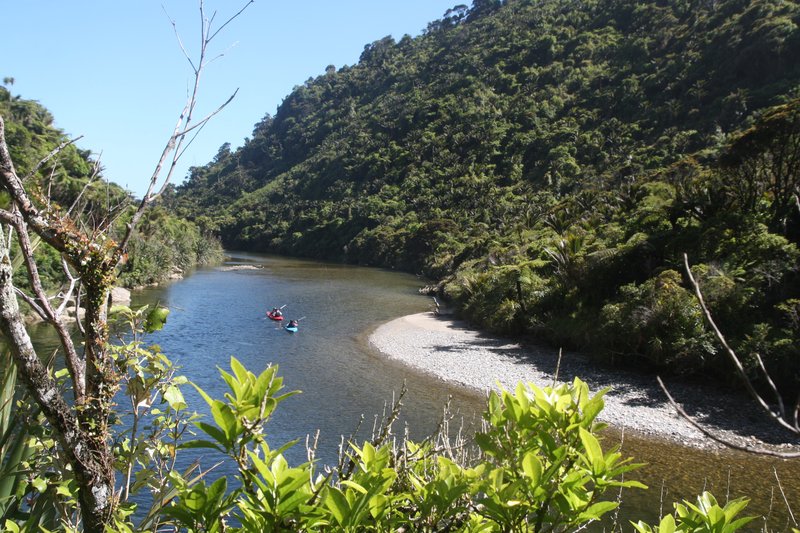 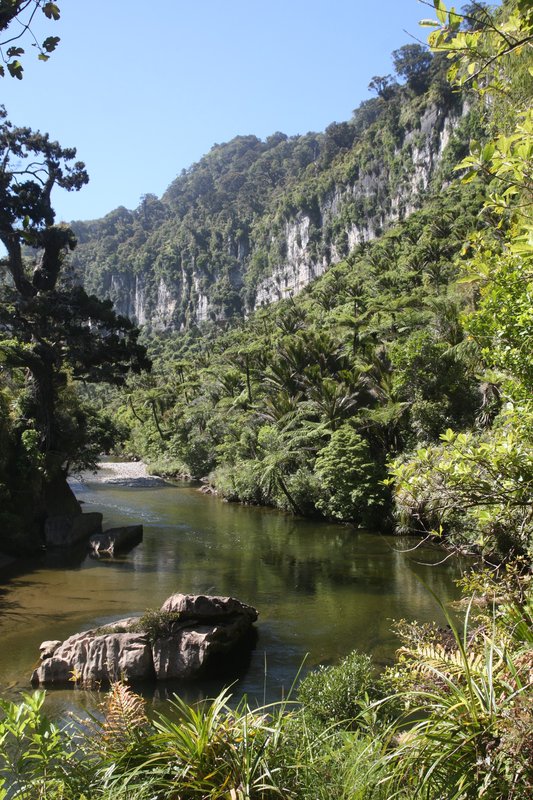 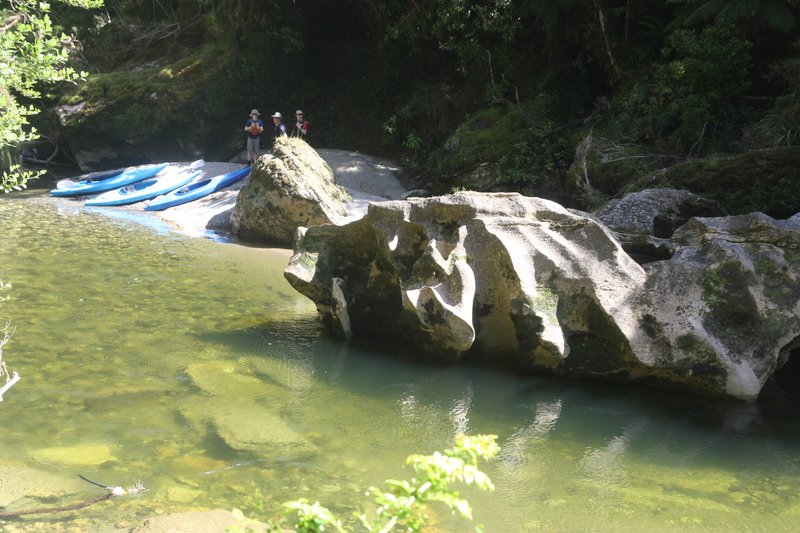 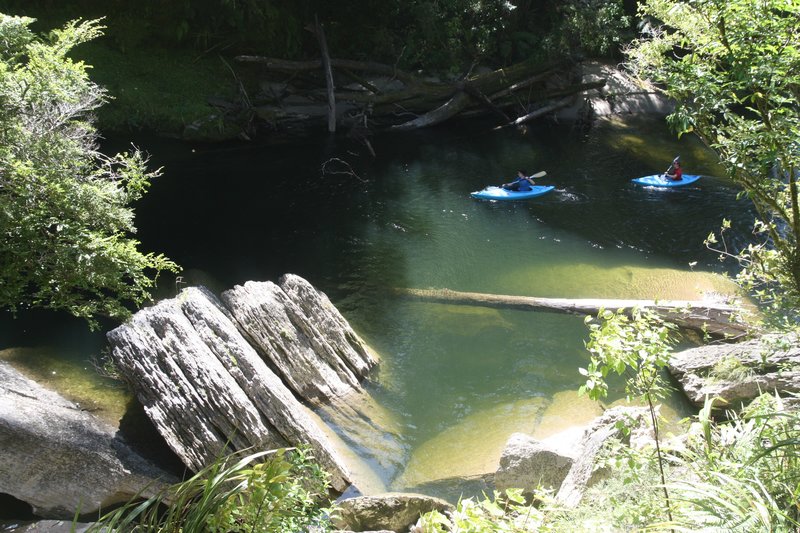 The track comes out into an area where the trees have been felled but there has been regrowth so it looks kind of chaotic, in a good way. The swing bridge takes you to the Bullock Track Creek, so I expect you could walk out that way as well. I was quite happy to retrace my steps, have a quiet beer and some lunch, then hit the road. 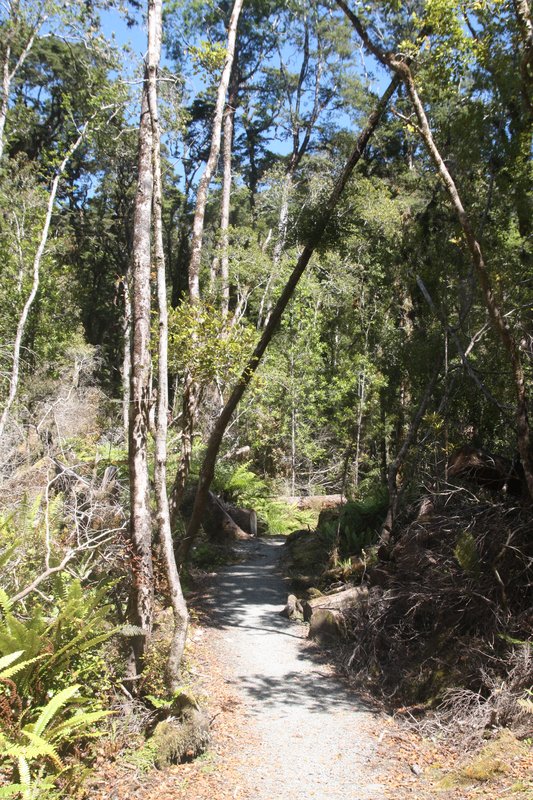 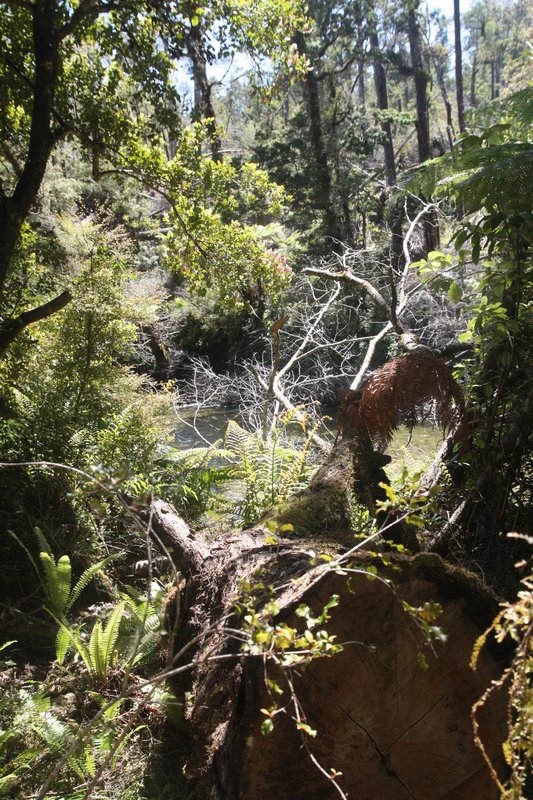 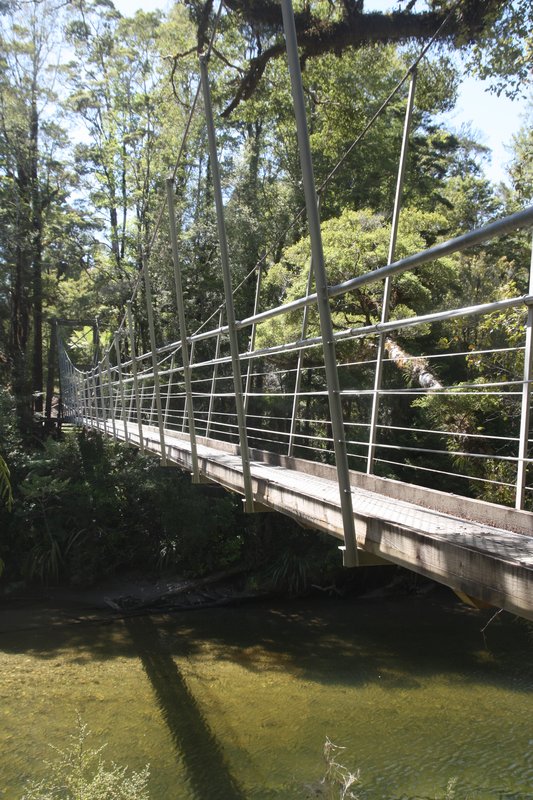 The coast between Greymouth and Westport is pretty spectacular - but better is to come! 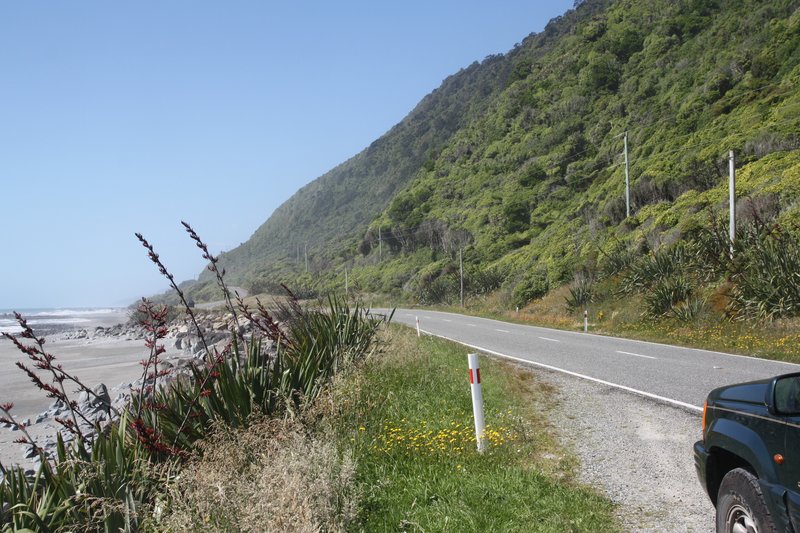 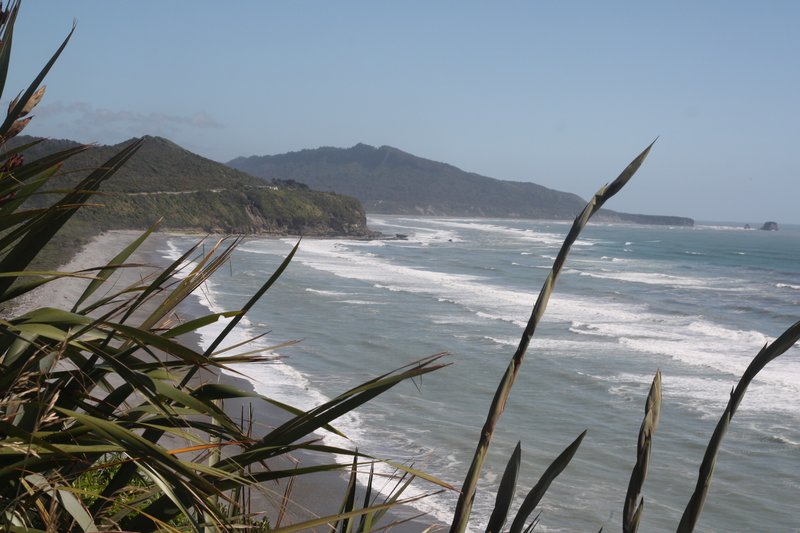 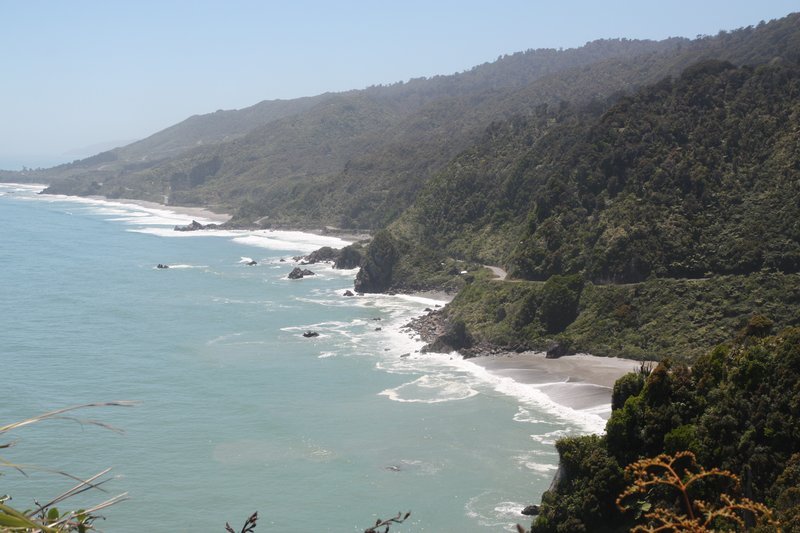 I never did get my Christmas lights on my caravan.