There is some irony in referring to the old city, given that Chiang Mai actually means new city. This is because it was established as the second capital (after Chiang Rai) of an area of northern Thailand in 1296 - probably because of its location on the Ping River, which made it important for trading. The original city was constructed within walls and a moat - it is this which is now called the old city. Not much of the walls survive - just the four corners really, but the moat is still there. 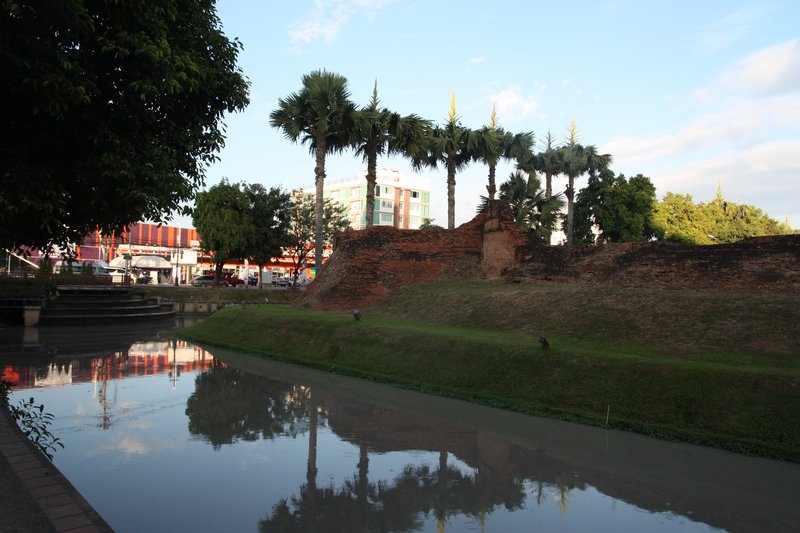 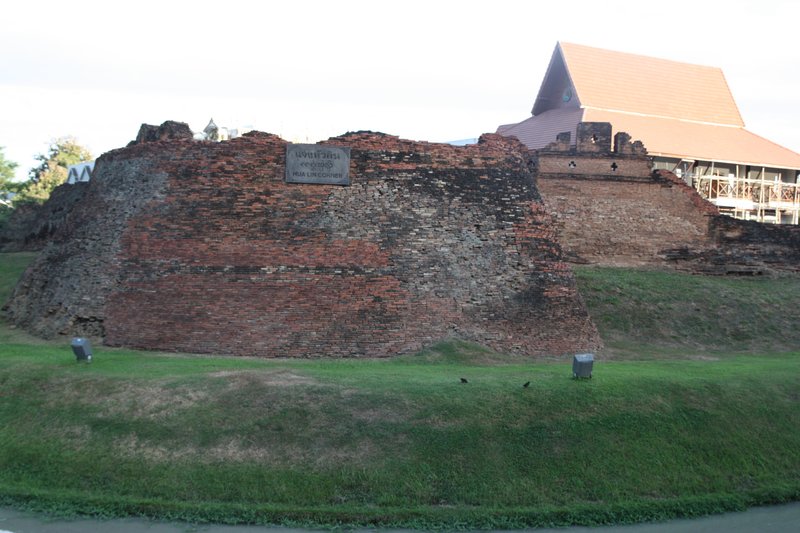 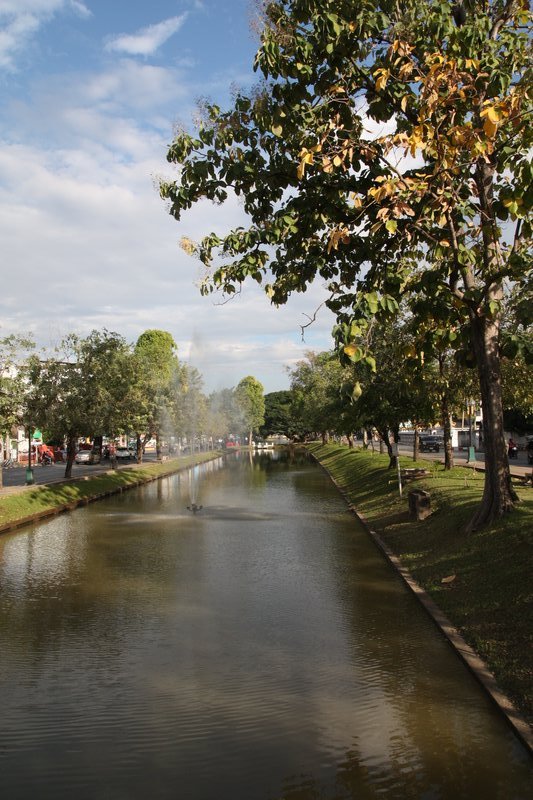 I spent a couple of nights in the Old City - near the Thapae Gate, which is half way up the western side of the city, and the most heavily touristed area of the city, probably because it is the first entry point when you arrive by train. Last time I was here, I simply walked in Thapae Gate and went to the first hotel I found: an $8 concrete walled box. This time, I planned ahead and stayed in one of the most highly rated guesthouses in town - Thongran's House. I walked in from my previous hotel near the University - about 3 km. I got so overheated that when I saw a nice looking place for lunch, I went in, not noticing it was a salad bar. 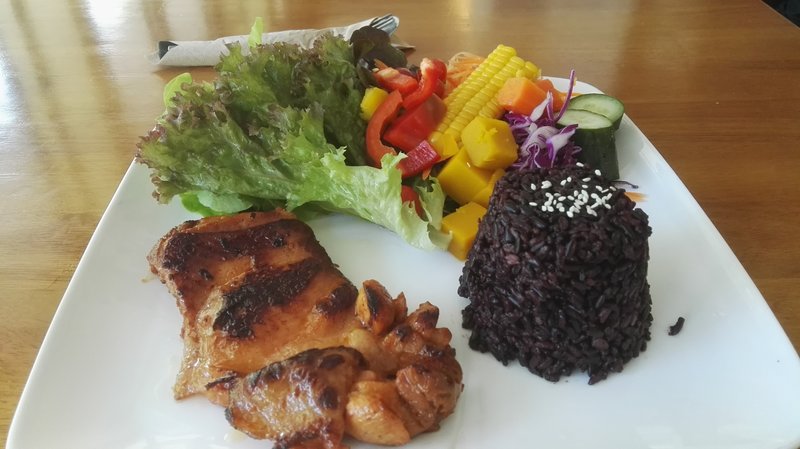 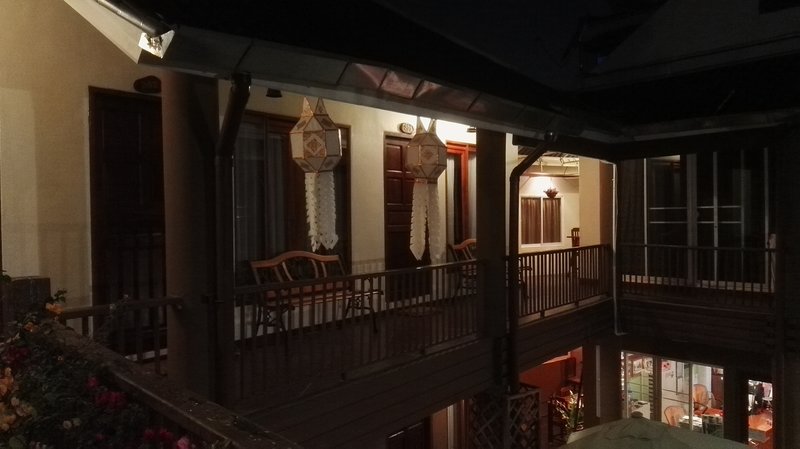 Thongran's house was pretty luxurious - not that you could tell from the street, as it was behind a coffee come massage place and a tattoo shop - and had a nice outdoor area where I could hang out, drink beer and read Infinite Jest. 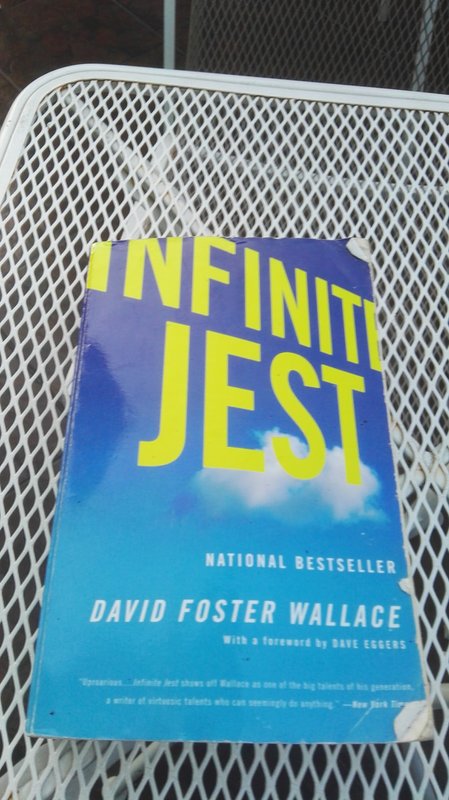 It was actually quite a nice place to spend New Year's eve - the people who ran it invited me to join them for a barbecue, but I felt that would be a bit odd, as they didn't seem to have much food and there were a lot of them, so went off to a nearby cafe for dinner (my big night out was on New Year's Day - coming up in the next post). At around 10:00 or 11:00, I happened to look outside, and thought "golly, those stars look strange and there's a lot of them" - it turns out they were little lanterns floating off into the sky. I know that I should have done a bit more to organise something proper for the night, but it turned out OK.

Over my time there, I walked most of the streets and lanes of the Old City as well as completely around the outside. The area around Thapae Gate was chocker with tourist-related businesses - guesthouses, cafes, tour providers, currency exchanges, hotels, massagers, tattoists, new agey helth nut providers and the like. The further away you got, the harder it was to find a currency exchange (which is why I walked all the away around), and the more the shops and businesses responded to the needs of the local community - shops selling coils of rope or tins of oil, mechanics, rice traders etc. The one thing I actually wanted to see in the Old city was the National Museum - but it and the nearby art gallery are closed for renovation, except for one room with some black and white photos of Thailand's coast. 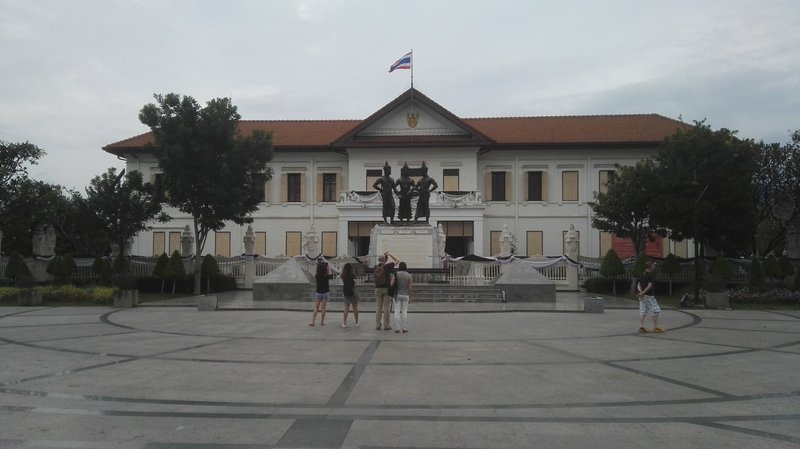 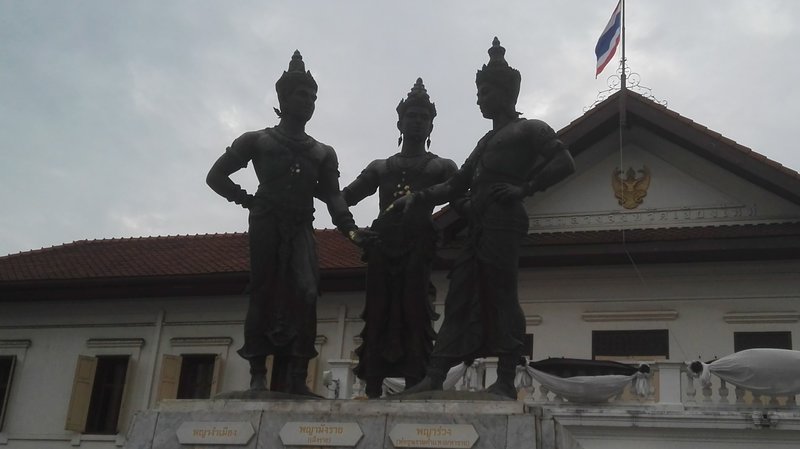 The Three Kings stand outside the museum - the first King of Chiang Mai (Mengrai) and two of his mates, kings from other areas in Thailand. There are also several Wats (temples) in this area - I made the mistake of going on a Wat tour the first time I visited Thailand, which left me pretty much watted out. Still, I thought I should take a photo or two. 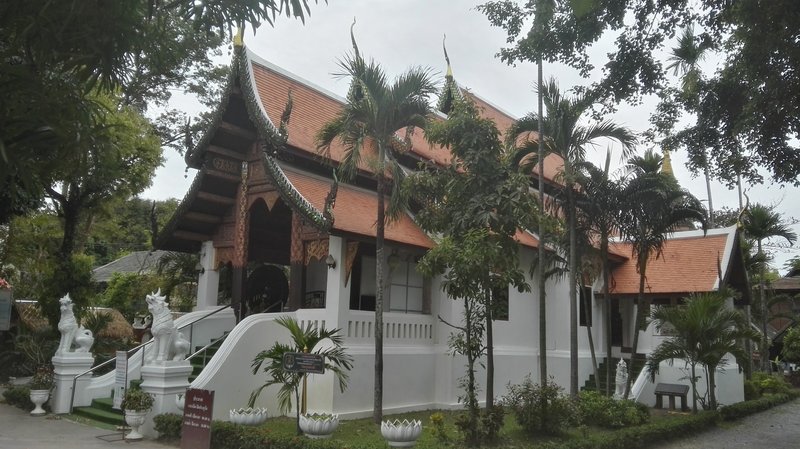 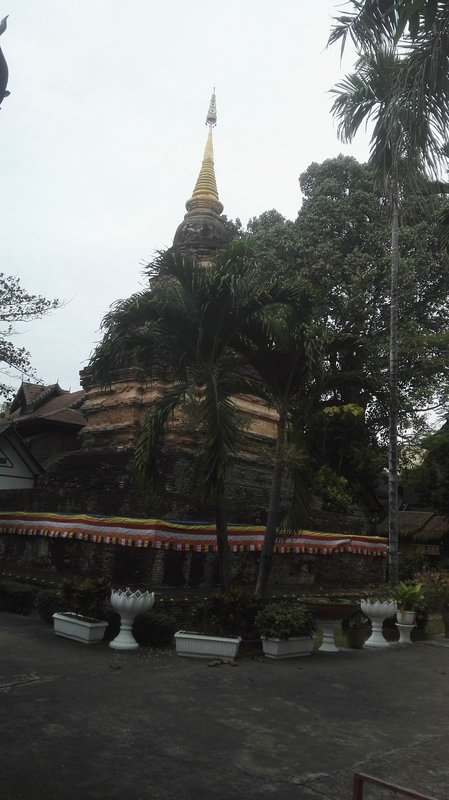 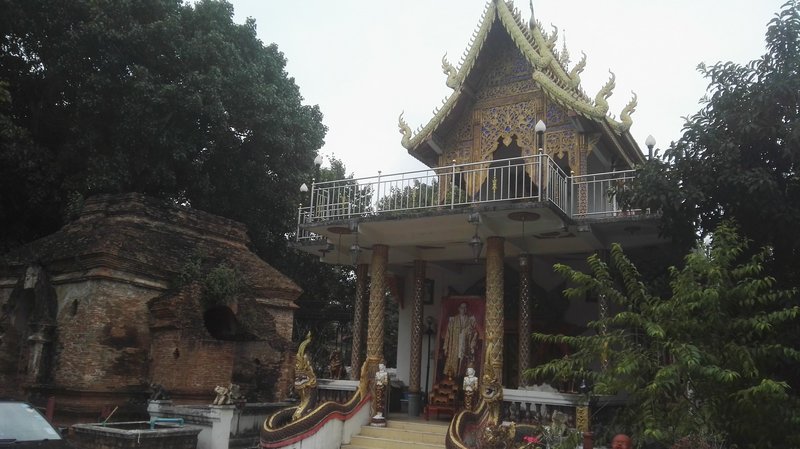 I was amused by a form of mobile banking outside one of the Wats - complete with currency exchange and ATM. 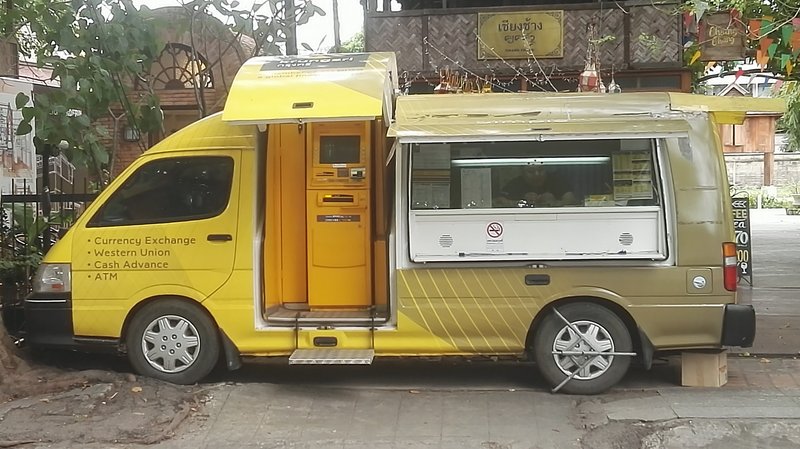 I did venture out of the Old City a couple of times - once to the railway station, as I had to buy a ticket for the last part of my trip. Going out Charoen Muang Road, the character of the street changes dramatically once you cross the river - it is once again far more about serving the needs of locals, rather than tourists, and the price of coffee drops by about a half. 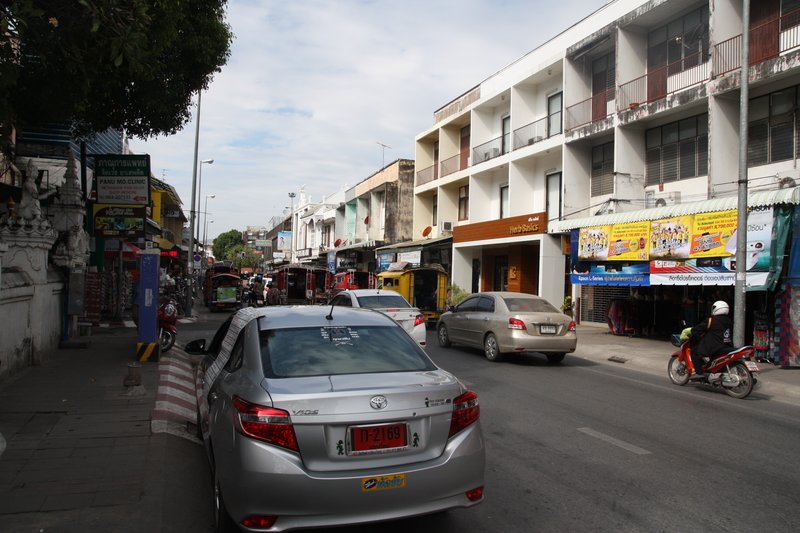 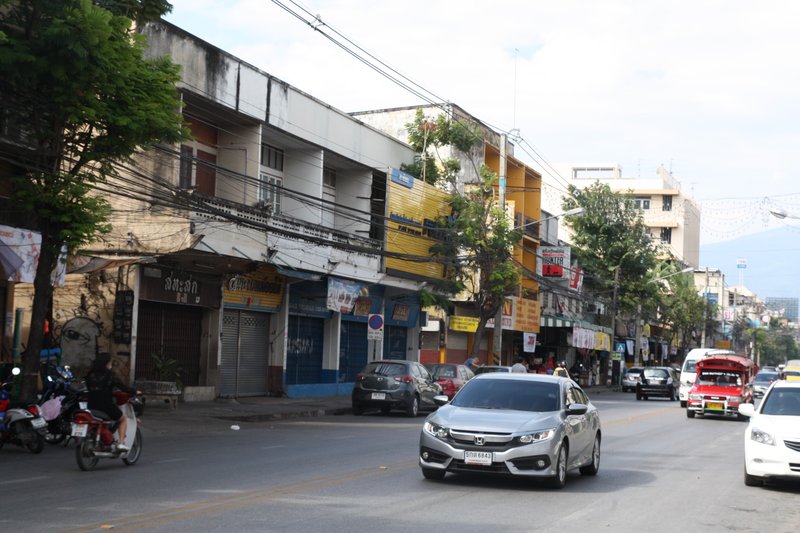 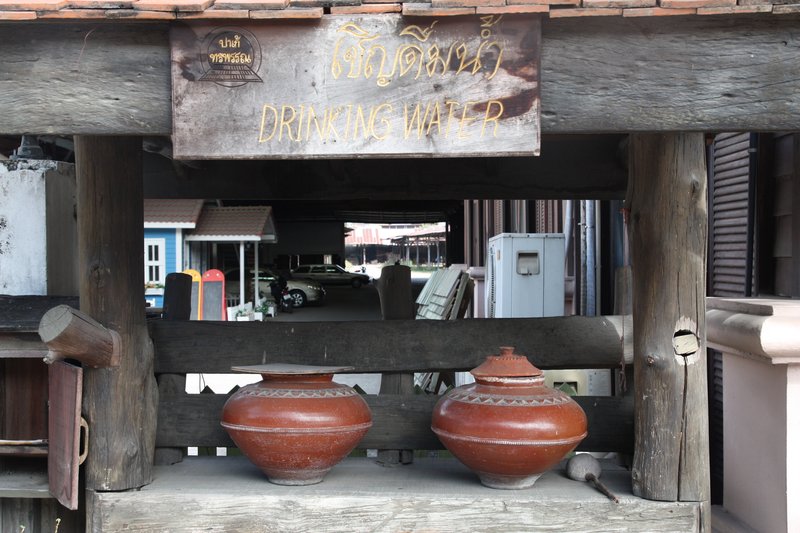 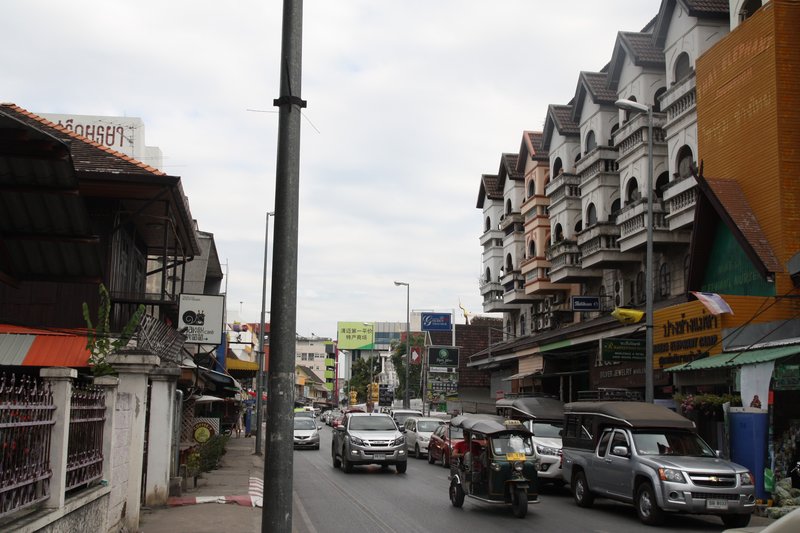 Naturally, there were more Wats - this (I think) is Wat San Pa Khoi. 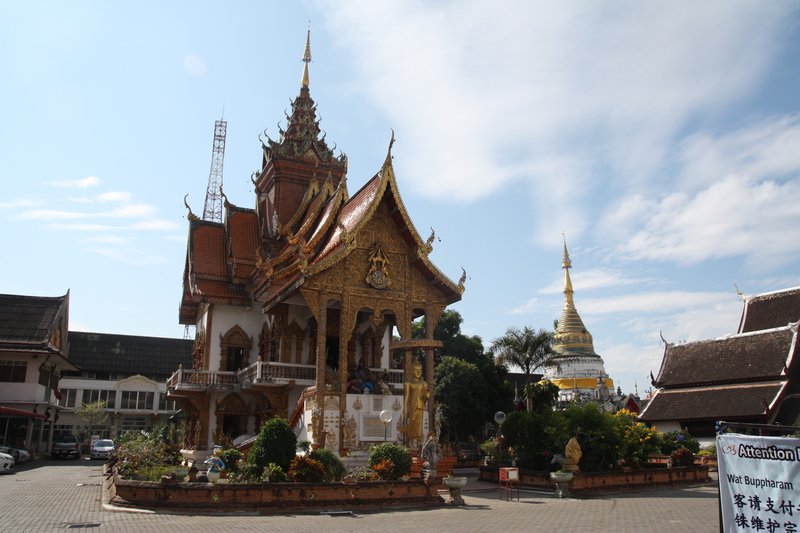 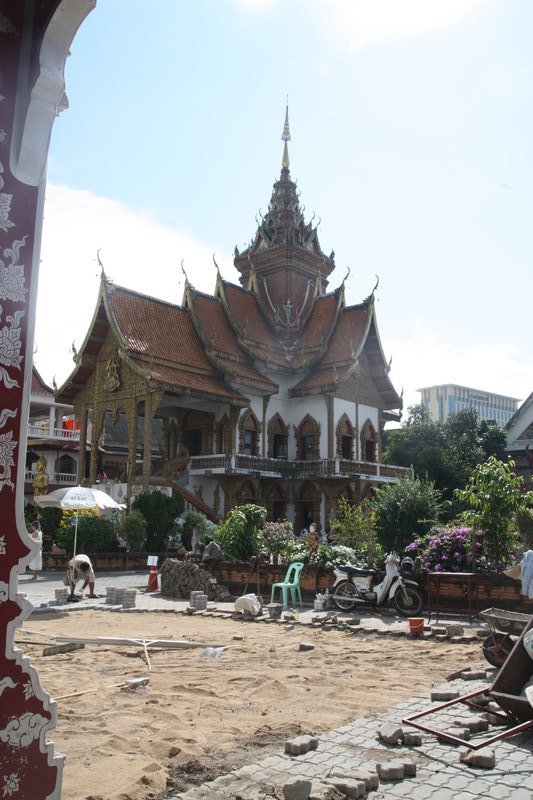 The station was almost deserted when I got there, but I had lunch and hung around until a train came in. I couldn't have a beer with my lunch - there was a pretty horrible "incident" in 2014, when a drunk railway employee did terrible things to a young girl on a sleeper train, which led to a total ban of booze on railway properties. 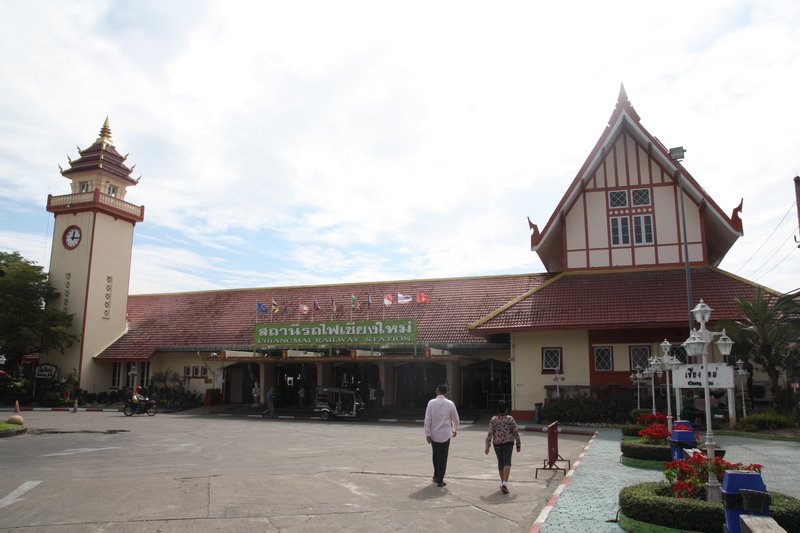 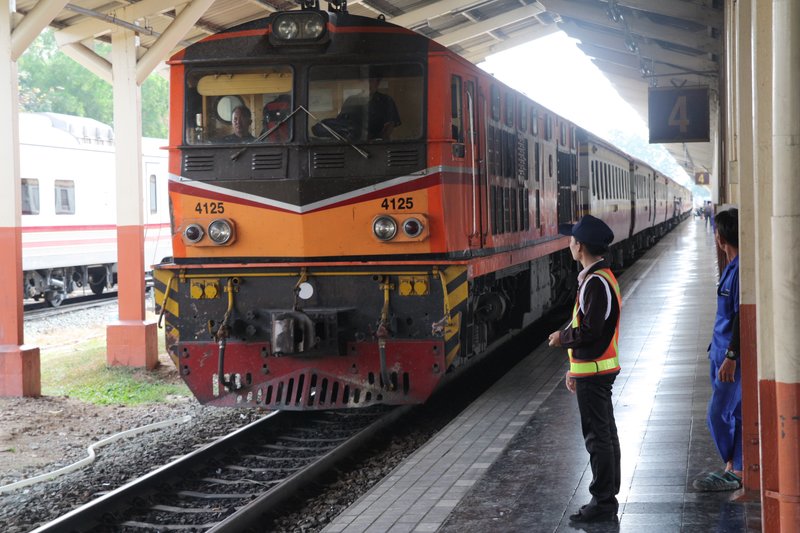 The front of the station became an almost solid line of tuktuk drivers and guesthouse operators, each trying to secure business from those getting off the train.

One of the more notorious streets in Chiang Mai is Loi Kroh Road - it runs between the wall and the river, and has lots and lots of bars. I ventured along here one evening - most of the bars had groups of local young women, playing pool or generally lingering: the internet suggests that you can talk to these young women by buying an over-priced "ladies drink", and that many will be willing to leave the bar when you go. It all seemed a bit sad - I was probably a bit early when I walked along, because they didn't seem to have much custom, and called hopefully to me as I went past. I don't want to be prejudiced, but they didn't seem to be wanting a conversation about Infinite Jest, so I kept on walking.

Posted by NZBarry 04:27 Archived in Thailand