Everyone, I think, knows of the Orient Express: if not the train itself, then Agatha Christie’s evocation of it or Lumet’s film version of it (starring Albert Finney as Poirot and a number of big name actors as the murder suspects) or perhaps the recent remake by Branagh. Although there are variants, the Orient Express featured by Christie ran between Istanbul and either Paris or Calais from 1918 until 1977. The Istanbul station referred to faces the Golden Horn and, as it happens, is just around the corner from my hotel, also called the Orient Express. 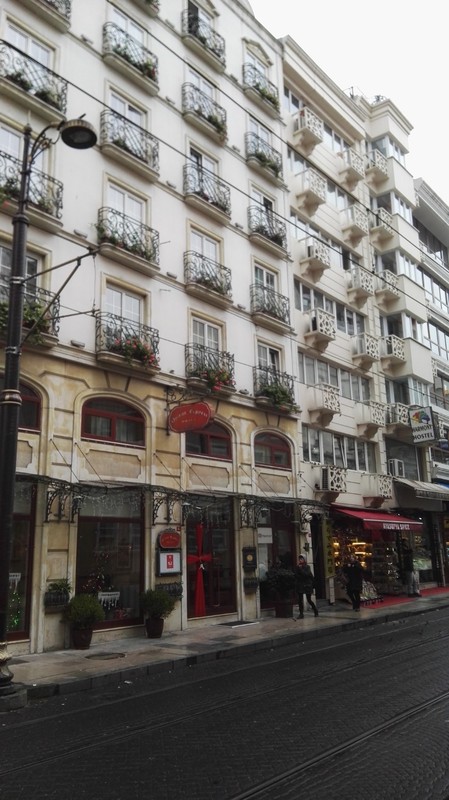 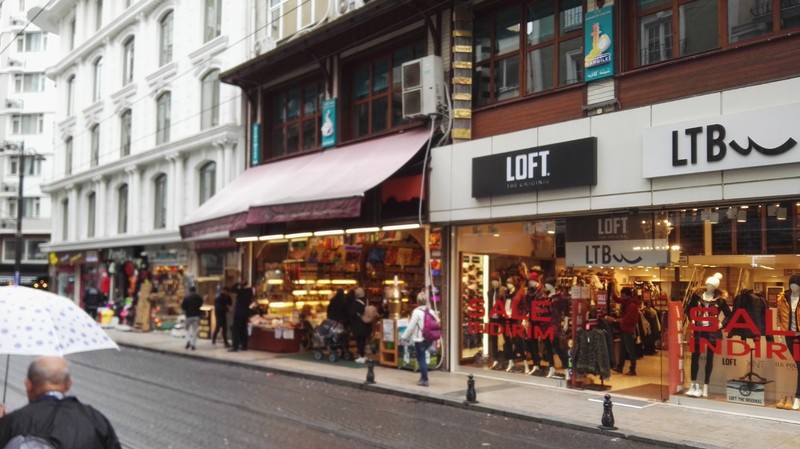 Sadly, the station is in a poor state and is barely used for trains any more. There is a heavily policed car park which makes taking photos a little awkward, but I do my best. 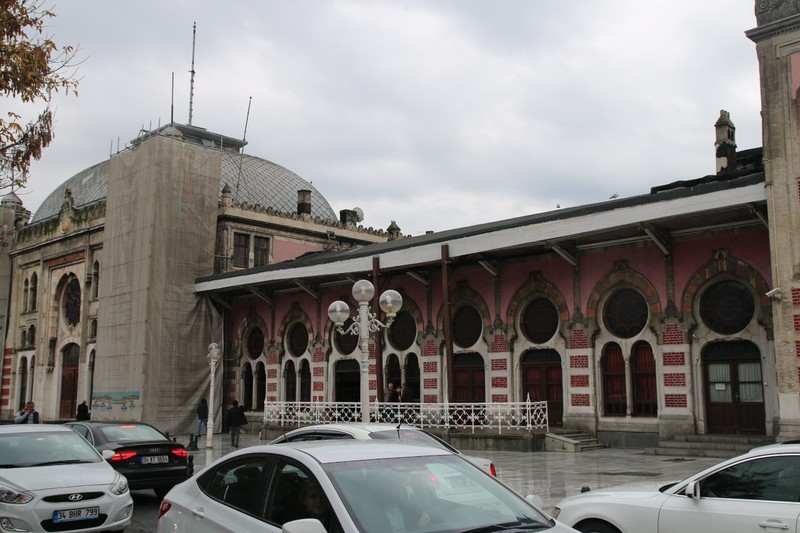 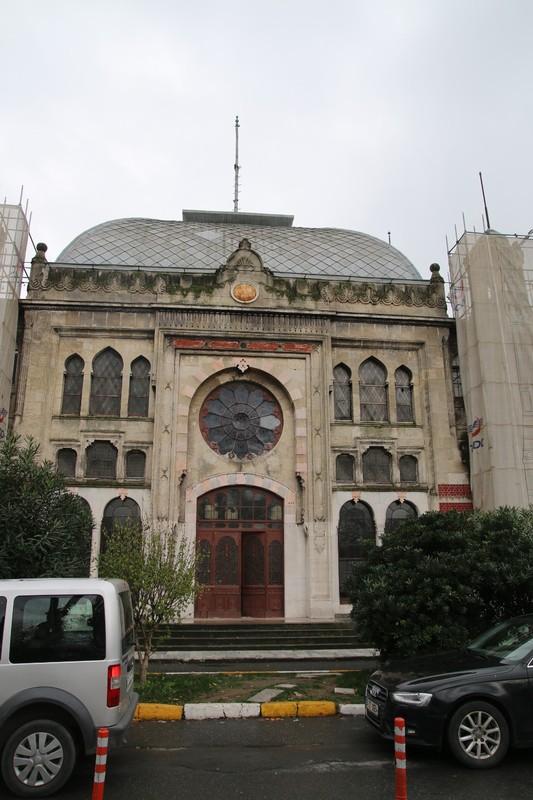 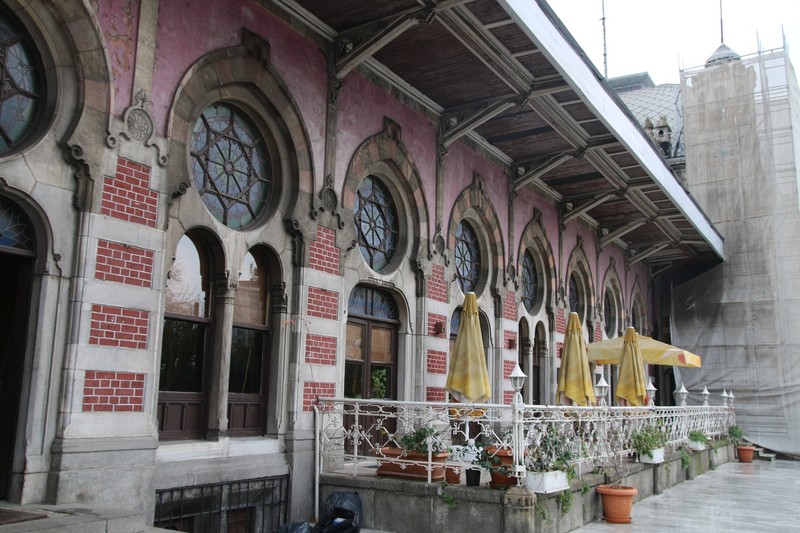 Inside, there is a museum, which I expect to feature Orient Express memorabilia but is really general Turkish Rail bric-a-brac - it is so crappy I don’t even bother unsheathing my camera. I like the ceiling and wall decorations in this room. 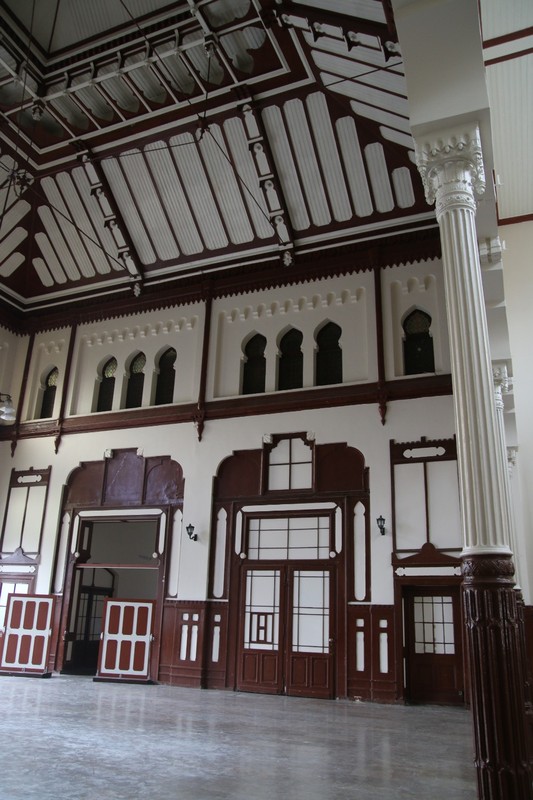 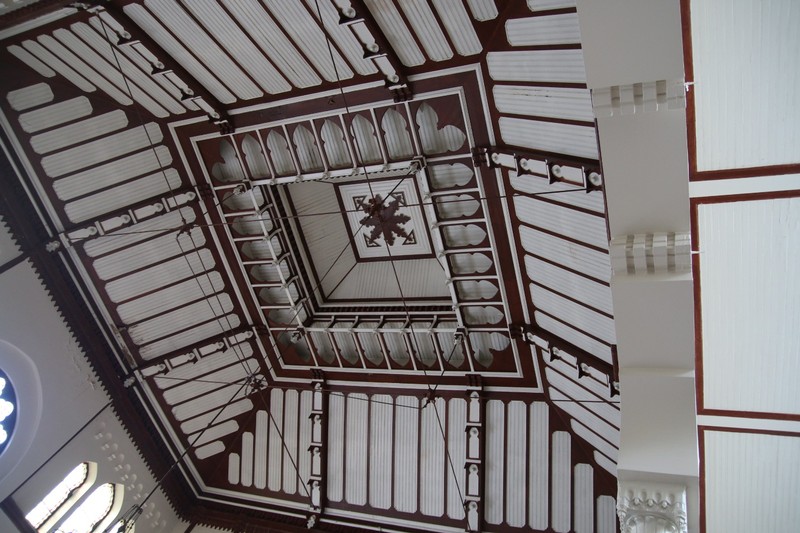 There is a thriving wee market and a handsome looking restaurant, which is deserted when I venture in so I do not linger. 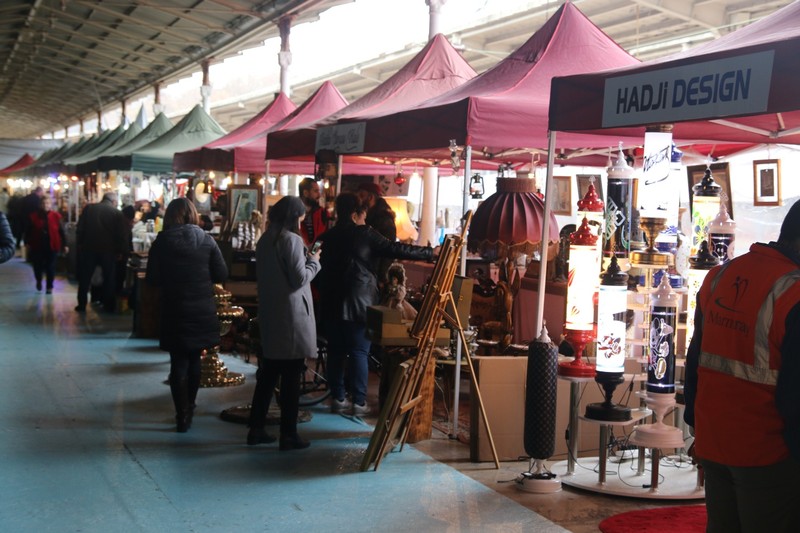 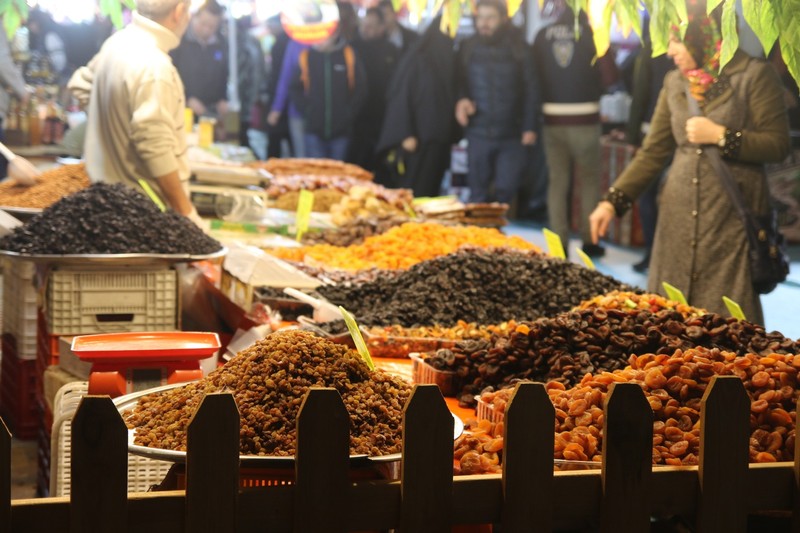 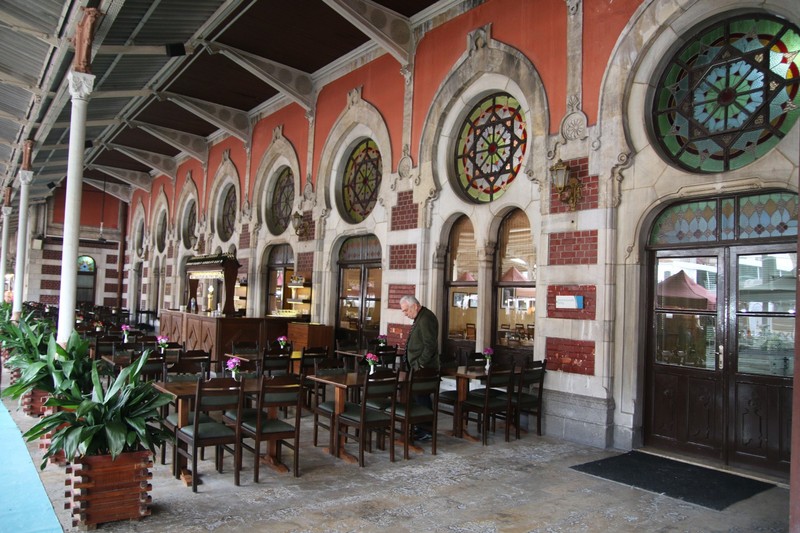 This is old town Istanbul, the part that was formerly known as Constantinople, and is now called Sultanahmet – I think because the headquarters of the Sultans who ruled the Ottoman empire are in this area. I like it a lot: it is less crowded than other parts of Istanbul, has a great range of places to eat, including some quite serious coffee shops, and nice streetscapes with decent shopping. I am taken by a couple of shops selling fountain pens and another selling shirts, but resist all temptation! 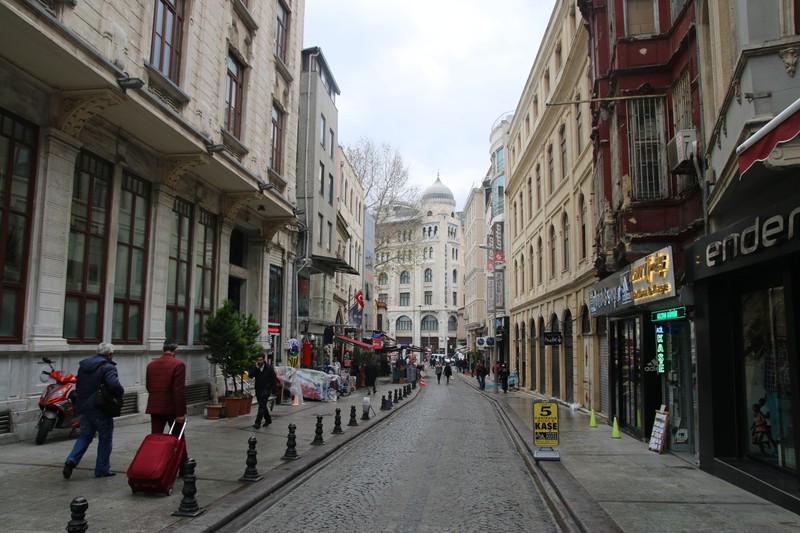 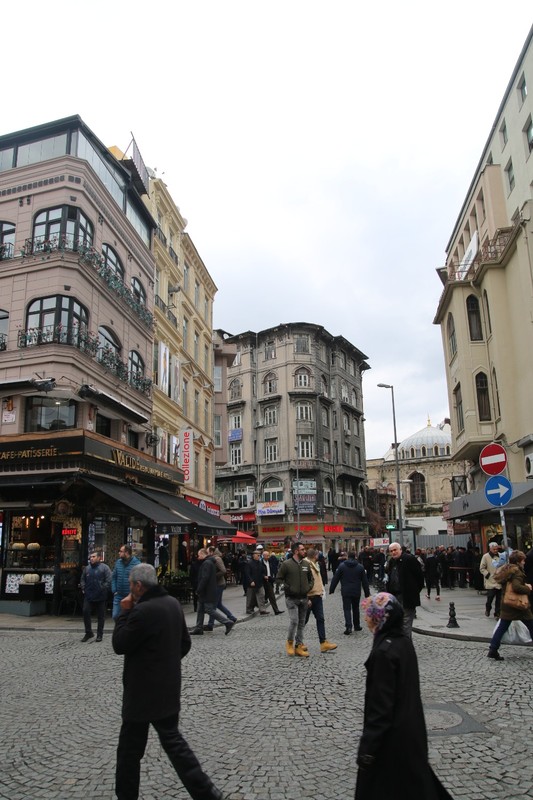 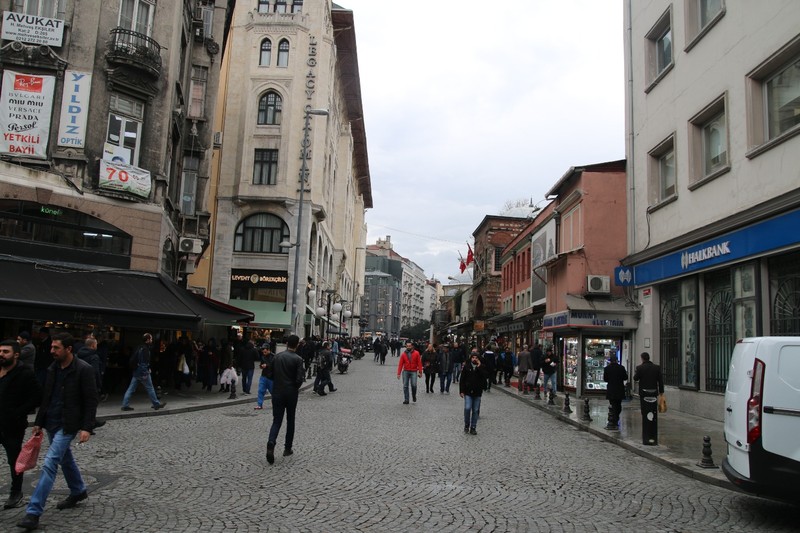 I am tempted to have lunch at this place, a Locantasi (which is a kind of buffet), but the huge queue puts me off, plus the food looks like it is cold. 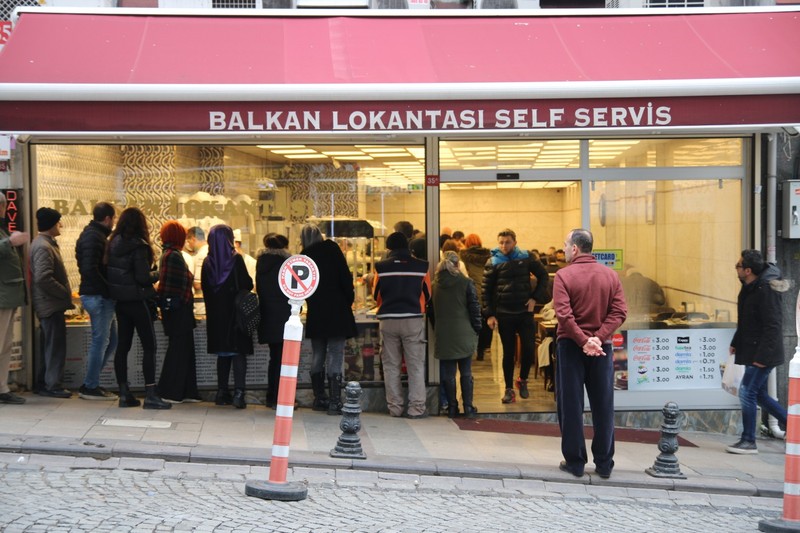 The only bigger queue I see is of people waiting to buy a ticket in the 70 million lira lottery. Lunch turns out to be in an old school place - formica tables, a couple of old gents in drinking tea, an old fellow running the kitchen and his wife the till - where I order what would be called a lamb shish back home, but this is much tastier. Somehow I make much less mess eating this than when I eat at the Trojan.

My first coffee is actually a Turkish coffee, a gift from my hotel. 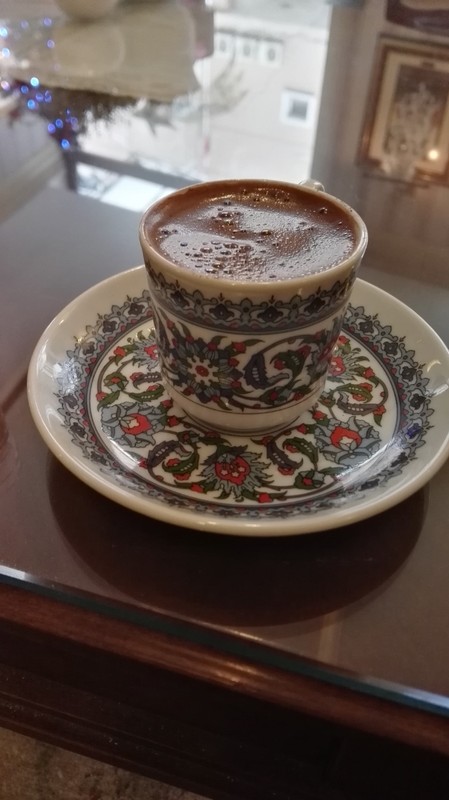 The only two hassles I encounter here are the carpet sellers and the trams. It takes me a wee while to catch on the first time I am accosted by a fellow in the street – he’s all about being friendly, come have a cup of tea, oh it is just up here, in my carpet shop, uniquely I have someone making carpet, come watch her... I soon learn to not admit it is my first day in town: saying it is my third day leads one guy to ask how many carpet shops I have been taken to. I like his gracious acceptance that I am not a starter. The trams are also a hassle because of the speed at which they move, with no barrier between pedestrian and tram. I don’t see anyone go under a tram but it must happen.

I wander up towards the Grand Bazaar, but am distracted by what I see on the way 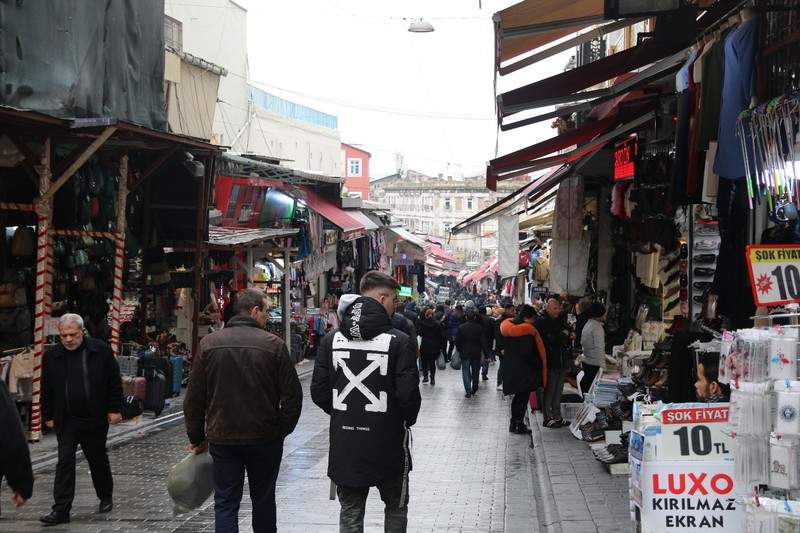 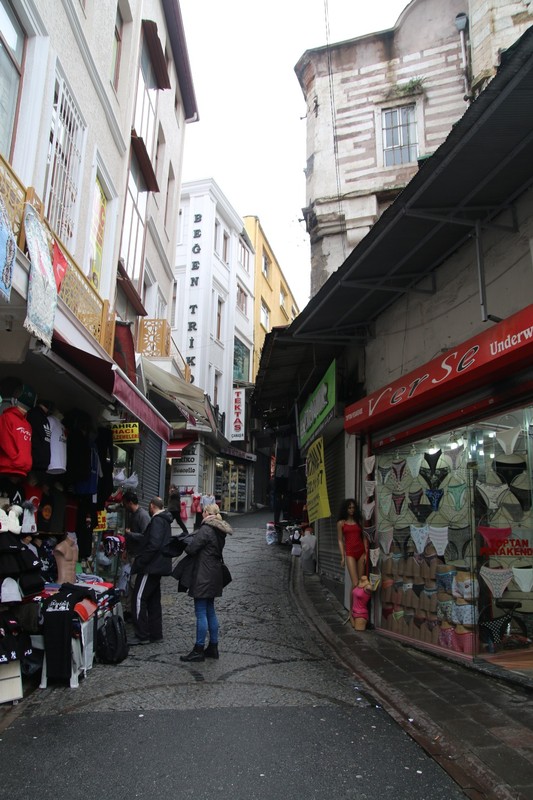 but run into very crowded streets 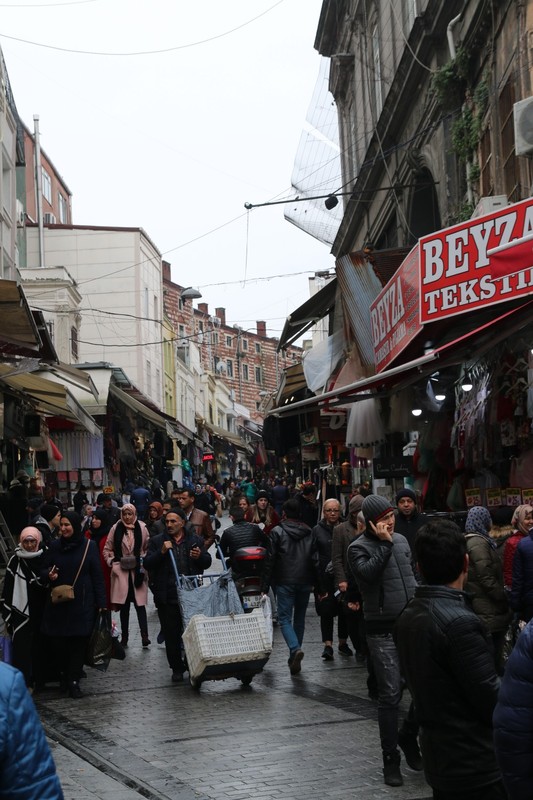 The Bazaar itself proves to be something of a reprieve from the crowds, despite being the most visited place in the world a few years ago. It has been around for nearly 600 years: as I wander around, I try to imagine how it would have been. I like the quieter nooks that I find, and try the food at what I guess is a very small Locantasi. 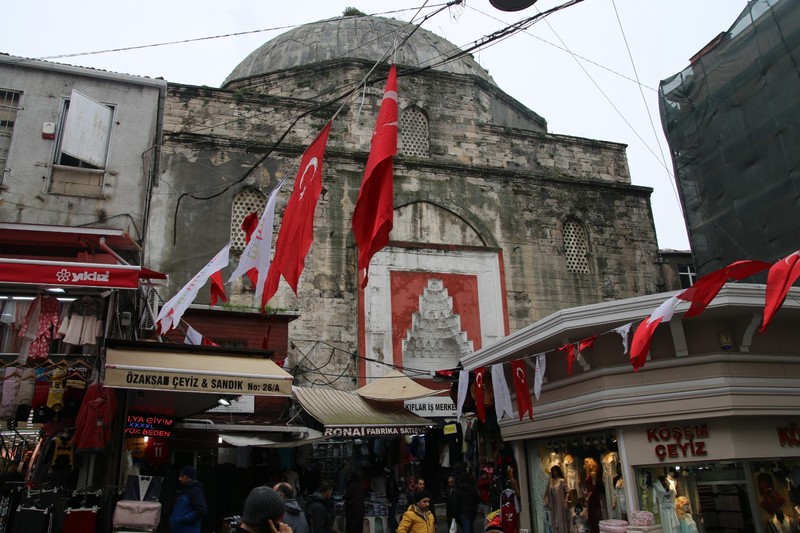 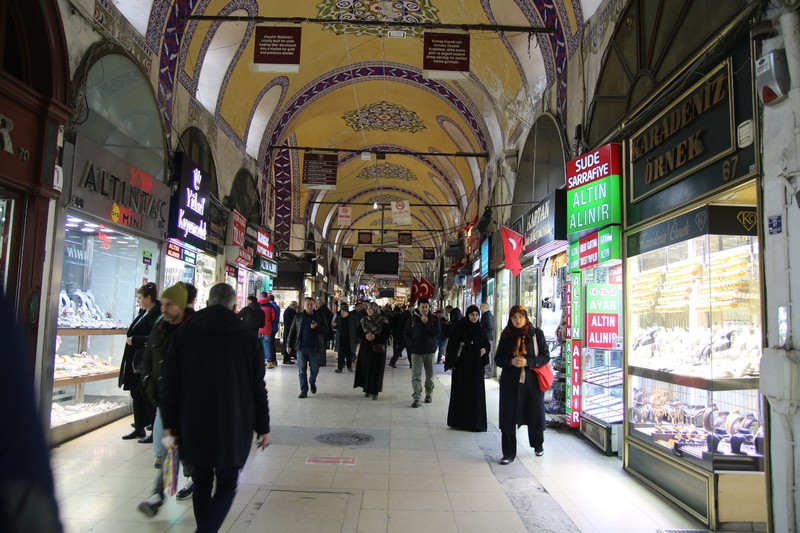 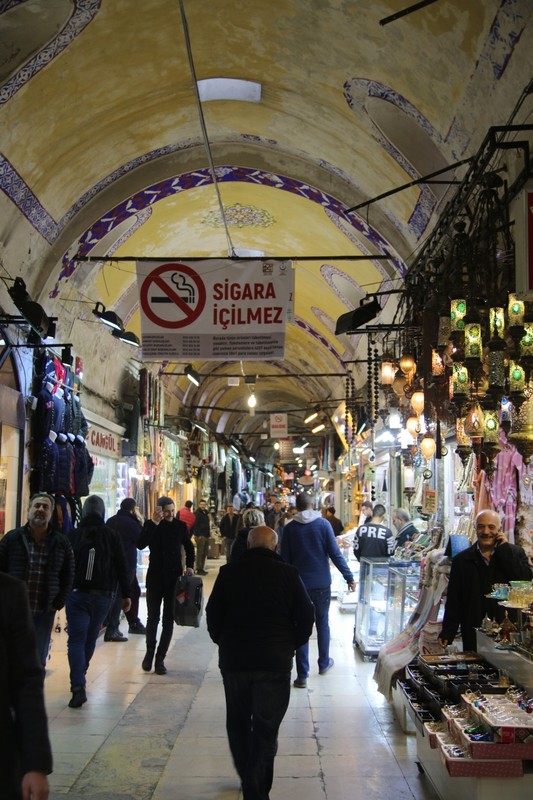 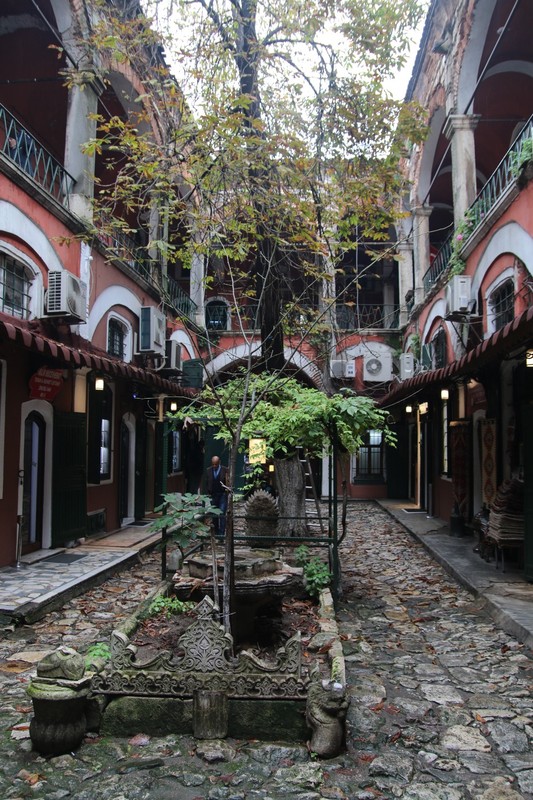 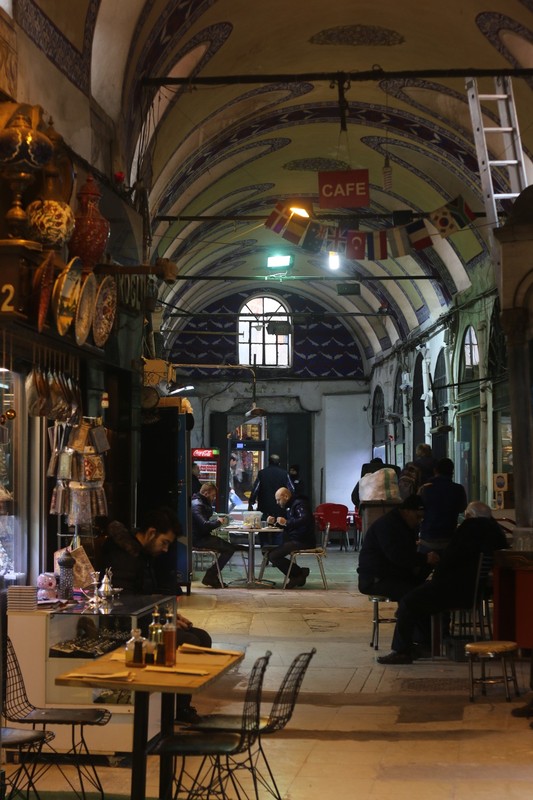 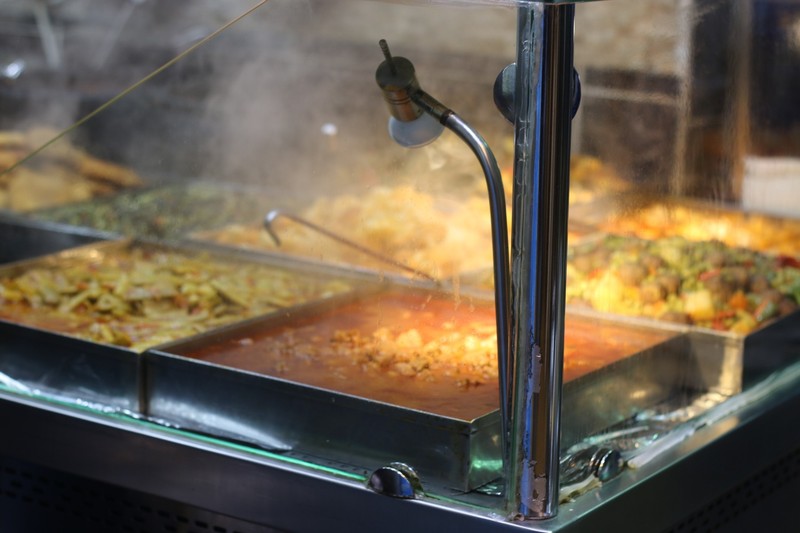 I don't spend all that long here - everything becomes a bit samey and there is not much that I am likely to buy. In particular, I am not going to buy (or wear) shirts like this (although I do like the lights, the chances of getting them home whole are not great): 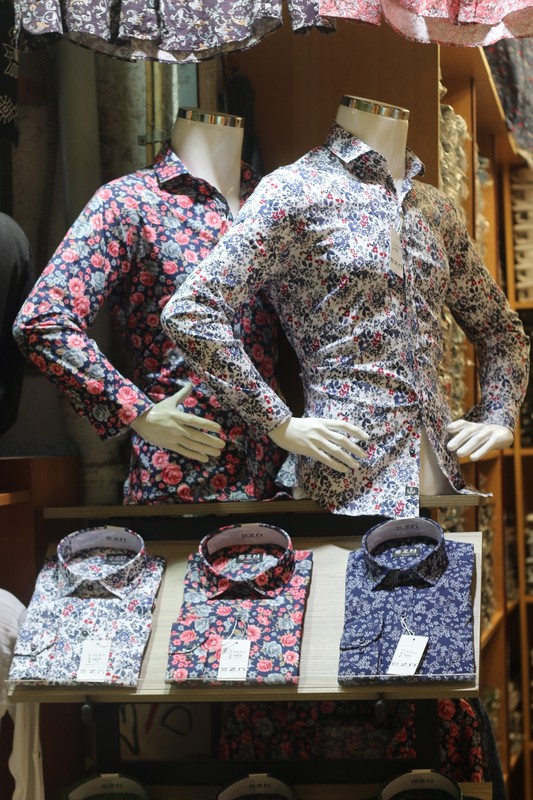 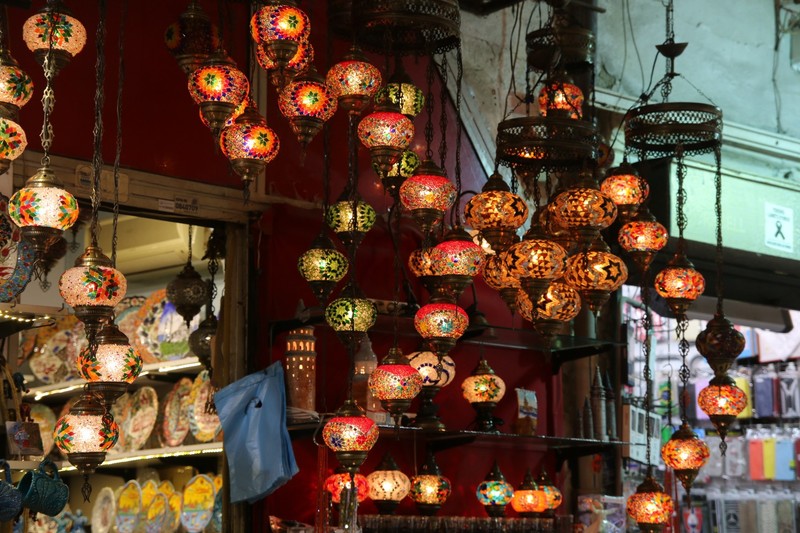 And then for a complete break from the pressures of the city, there is Gulhane Park, which was originally the Sultans' garden 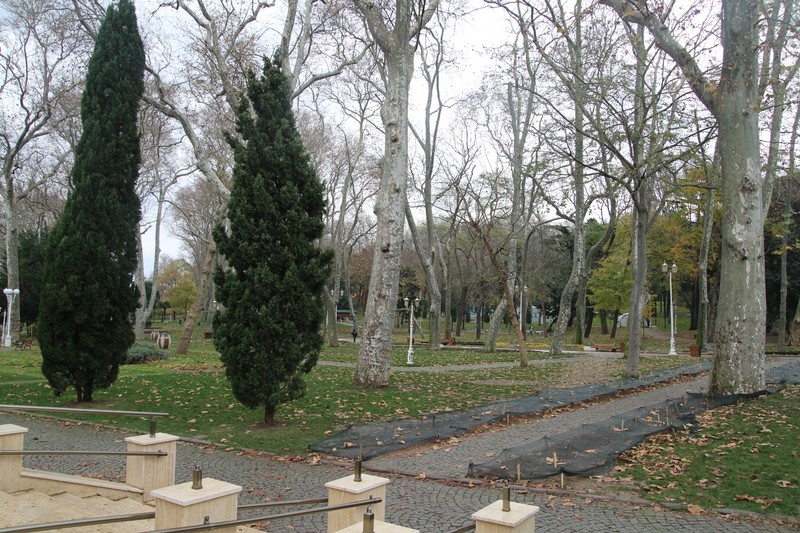 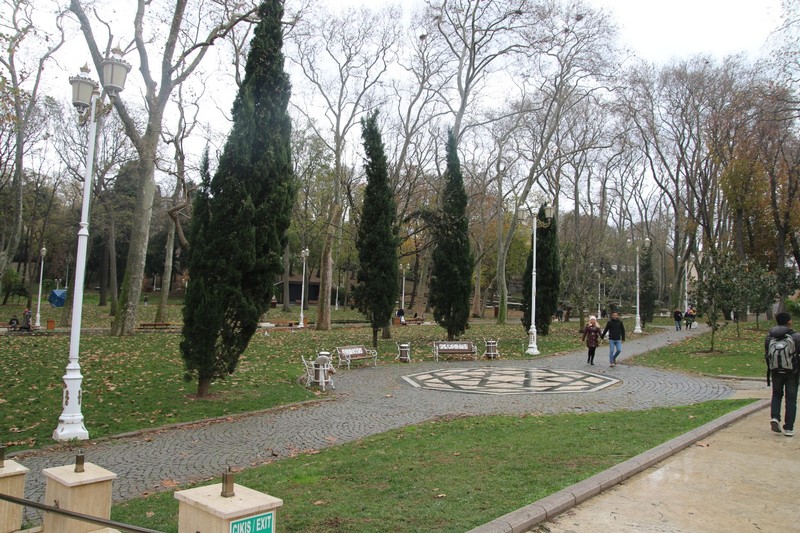 Posted by NZBarry 10:45 Archived in Turkey