And On to Birmingham

Rather than go straight to Birmingham I thought I'd look for somewhere nice between London and Birmingham with a Travelodge offering a £9 room and came up with the Cathedral town of Worcestor - famous for its sauce, porcelain and composer (Elgar). What I didn't know when I booked my hotel was that to get there from London, you go through Birmingham anyway. So, I had a tedious trip in a Megabus up the M4 and got dumped in the middle of Birmingham. Luckily it was near to the train station, so I was straight on a train out to Worcester. While the main street was pretty standard main street, there was a very nice secondary street, what possibly was the former main street. This one had interesting old pubs and quite a few Tudor buildings which, despite looking a bit crooked, seemed well maintained and still very much in use. 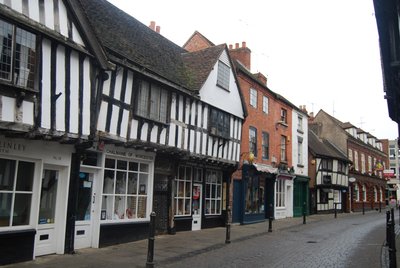 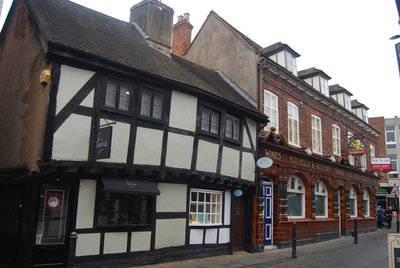 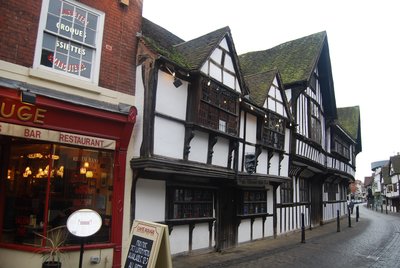 This provided for a very nice space in which to wander - I managed to not even get to the river before darkness fell, so that joy is still in front of me.

My hotel was nothing like that - it was just a tower protruding from a shopping mall, but it was directly opposite the Cathedral 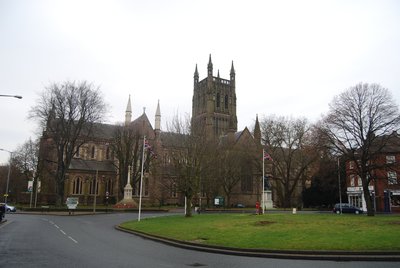 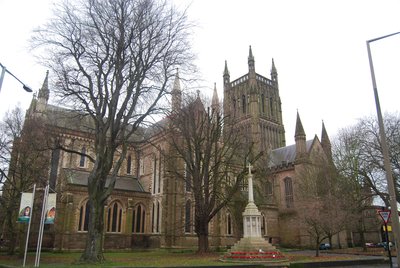 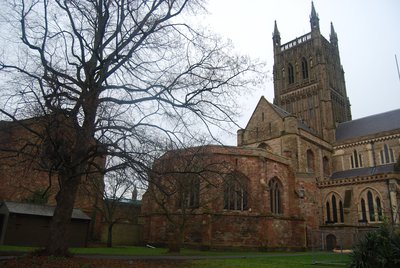 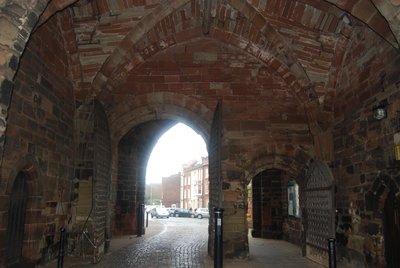 Dinner was in Ye Olde Talbot, an inn dating back to the 13th century, although you'd hardly know it to look at it. [Post script added 1 February: curiosity and 20 quid for bed and breakfast got the better of me, so I am presently back in Ye Olde Talbot Inne - one part of the bar shows definite signs of being really old, what with the timbered and very sagging ceilings, as do some of the internal (and quite crooked corridors). Has to be one of the best bargain stays I have hit.]

Since I was so close, I decided to take in the midnight showing at the cinema - Slumdog Millionaire. I read the book on which it was based a couple of years ago (Vikas Swarup's Q & A), and don't think a whole lot of liberties were taken. Although the dwellers of the slums in which it is set have since claimed it is a completely unfair representation. Funnily enough, very little of the movie is actually set in the slums, and it tends to take a once over lightly approach to their physical environment - the focus is on Jamal's escape, one which is so unbelievable that when he wins the Indian version of Who Wants to be a Millionaire, he is declared a cheat and arrested. The story reveals how he knew the answers to the questions - which often involved stuff that happened in the slum, such as the way in which gangs would seize "orphan" kids and deliberately maim or blind them so they'd be more effective as beggars (particularly if they were nice singers).

So, it was Sunday afternoon that I arrived in Birmingham for real, and checked in to the Birmingham Central Plaza Travelodge. I took the evening to wander around the centre of the city, which seems very built and organised, and was so surprised to find that here Nando's do table service (and beer) that I had I had to go in and have dinner.

As it happened, I actually only stayed there the one night - I had the week booked out at Wolverhampton, a mere 16 miles away. Getting to my hotel was a disaster - I must have read the map upside down or something, but I walked for a long long time in what I thought was the right direction around the ring road without seeing any sign of it. Just to add interest to my walk, the rain was quite persistent (and, remember, this is the coldest its been for twenty years). I've never been so glad to see a McDonalds - I went in and had dinner and used their wifi to reassess my map, and go back the way I had come. It was a pretty bedraggled Barry who presented himself at the Travelodge. The staff were nice, and the hotel was new and warm, so I was soon happy again. In fact, by the end of the week, I'd have been quite happy to live there - I got into a nice routine of watching Masterchef, then taking my book (still Malcolm Lowry's Under the Volcano, which really is a book of sad genius) into the bar for a nightcap. I think hotel living suits me.

Work was a different story; I turned up on the Monday, and no-one seemed to know I was coming. I had to wait for someone to clear out of the office I'm to use and was then left to my own devices. The fellow who invited me didn't come say hello, in fact for the whole week I was left entirely on my own! I had no connection to the University computers and only had a library card because I hit a security barrier trying to get in, and found out for myself how to organise one. The reception staff insist that I sign in for a key every morning and return it when I leave because, apparently, I am sharing. The only colleague I have seen is actually from a different university in Birmingham, who is teaching a winter short course here. She's going to work on orgainising me to go visit their university, which sounds good.

It also took a wee while to sort out optimal travel arrangements out to the University. On my second day, I took the bus. Big mistake! It took two hours to get into Birmingham, ducking and diving up various narrow streets, and at times the distance to Birmingham actually increased. Going home, I did find a faster route, but I shared with a quite disgusting young man - he kept hassling this girl, a complete stranger, asking for all sorts of very personal information and generally being a pain (she, curiously enough, tended to answer him). When she got off, he turned his attention to a young guy, bragging about all these games he robbed from some store and then using one of the seats as a urinal - provoking giggles from his companion. Ah, well, I had a very pleasant meal at one of Wolverhampton's pubs (almost all pubs over here seem to be having big promotions in which food and drink are reduced dramatically) and that helped my mood recover and I have found the trains to be cheap and quick, if you get on the right one.

Wolverhampton (famous in New Zealand as being the home town of Suzanne Paul, but is also the site of the first traffic lights in England (yes, they're stretching) and of Chubb locks and Goodyear tyres and the present champon English sausage maker) isn't bad as a town (sorry, city - it was given that status in 2000), as it happens. Sure, it seems to close down early at the beginning of the week, but I've found quite a few interesting buildings - the library is a wonderful old pile (built 1902 to commemorate Queen Victoria), it has a good art gallery, St Peter's Church is a spooky presence as I walk past at night, lots of cheap food joints and pubs as well as some nicer places and one of the most awful feeling shopping malls I have ever been in.

Posted by NZBarry 14:54 Archived in England