The Ottoman Empire was a big deal, taking out the Byzantines and conquering Constantinople (now known as Istanbul) in the mid 14th century. At its peak, it controlled huge parts of Europe (as far west as Hungary) and bits of the Middle East, Asia and Africa as well. I am not sure when the Hapsburgs retook what we now know of as Hungary, but just today I read a wee story which is just fabulous enough to be true. The Ottomomans adopted a crescent moon as a symbol, for use on battle flags etc. When they were repulsed by the Hungarians, as a way of giving them the finger, the Hungarians developed a crescent-shaped bakery product called the Kifli - which the French adopted and called the croissant. I have no idea how true this is: my source is a character in Elif Batuman's The Idiot.

Anyway, within a few years of the conquest of Constantinople Mehmed the Conqueror decided he wanted to build a HQ there, called Topkapi Palace. It was thus the centre of power of the Ottoman Empire from the 14th to the end of the 17th century. Most of it is still standing, so of course I pay a visit. The main entrances look like the real thing - I go in the first and out the second: 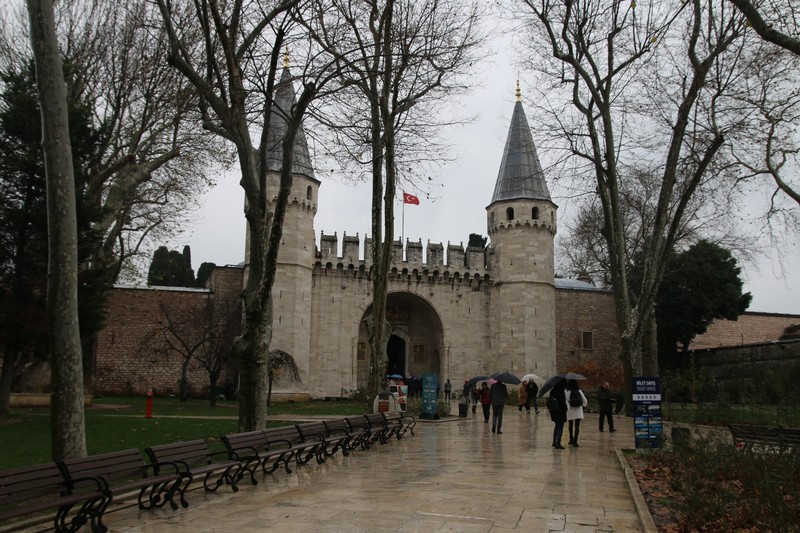 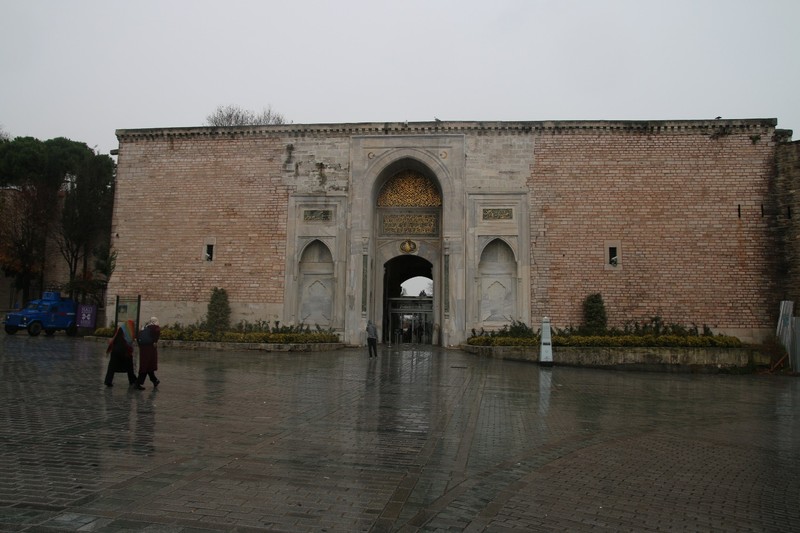 There are lots of buildings I can't really identify, but there are several pavilions built off what seemed to be the main palace. In 1640 Sultan Ibrahim had a special one built for the purpose of having his various sons circumcised - I am not sure why divans were built in! 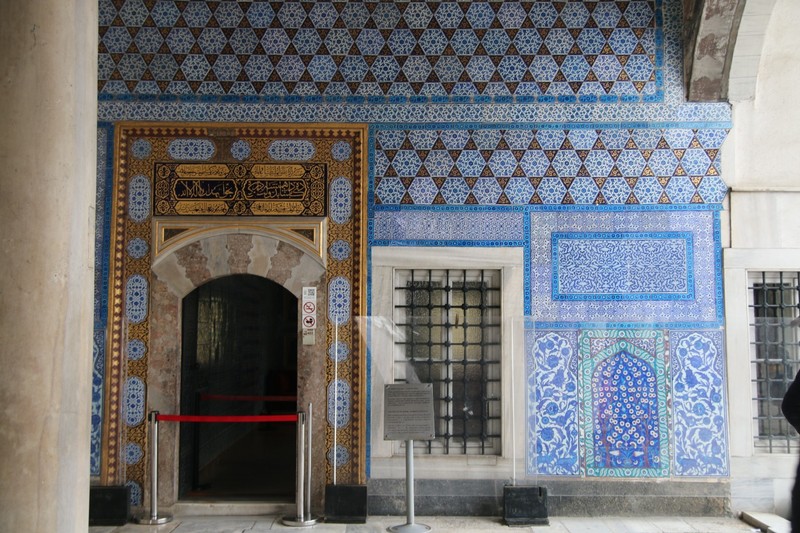 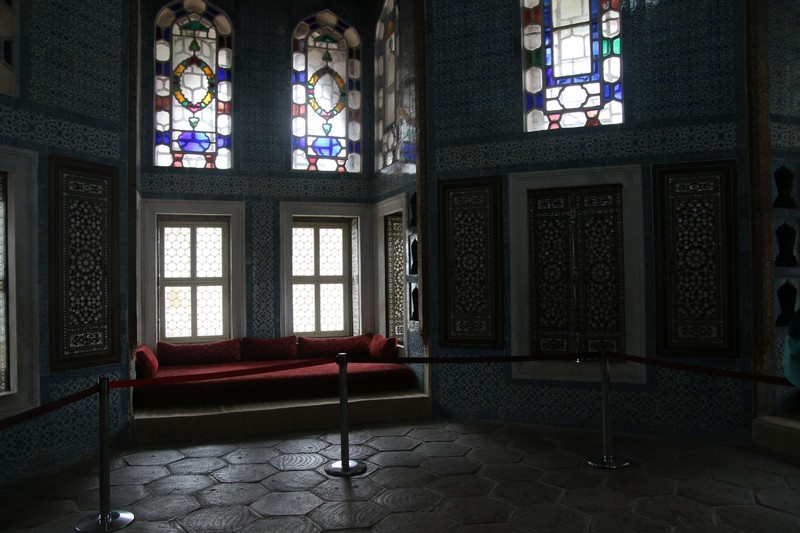 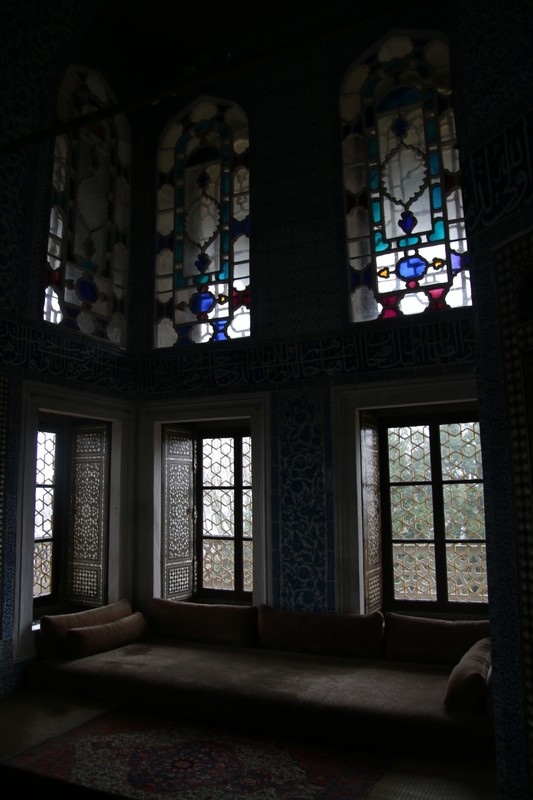 Another Sultan had a pavilion built to house his turbans, of a similar size. A summer pavilion was built in the 1640's to celebrate the fall of Baghdad - at one stage it was used as the library for the Privy Chamber - the Council of Vizers 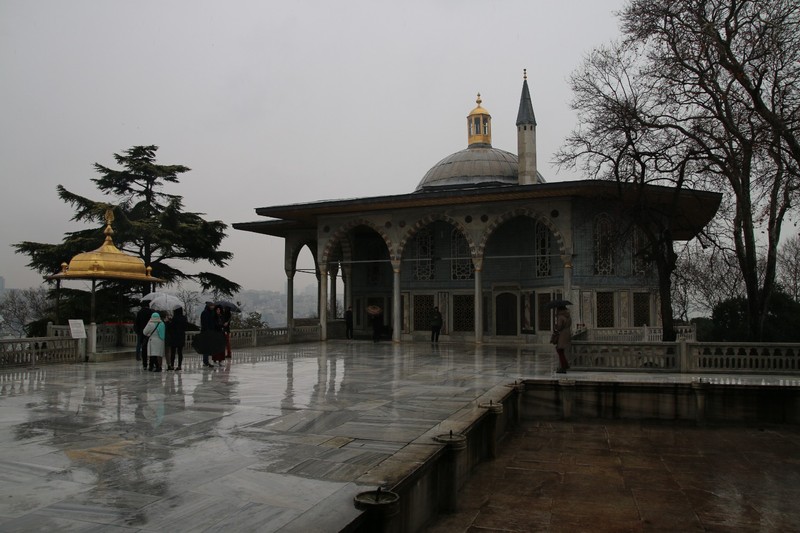 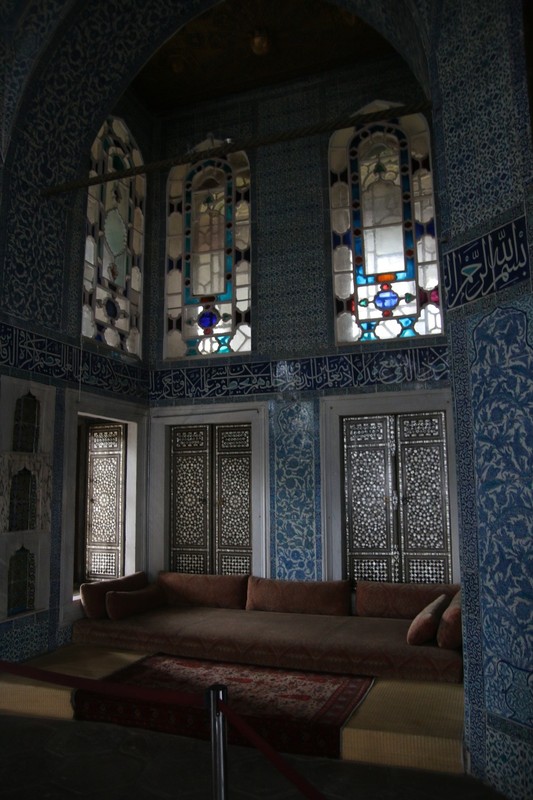 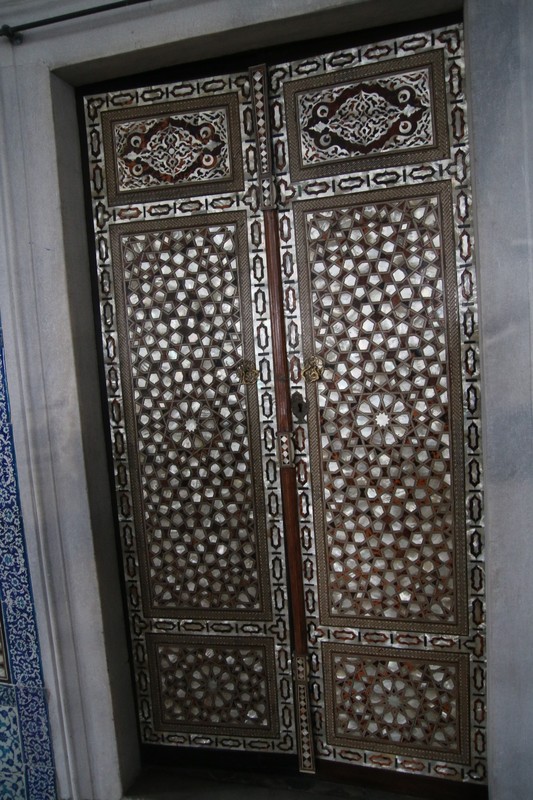 All of the contents of the Council room have been removed, but the walls and ceilings are nicely decorated 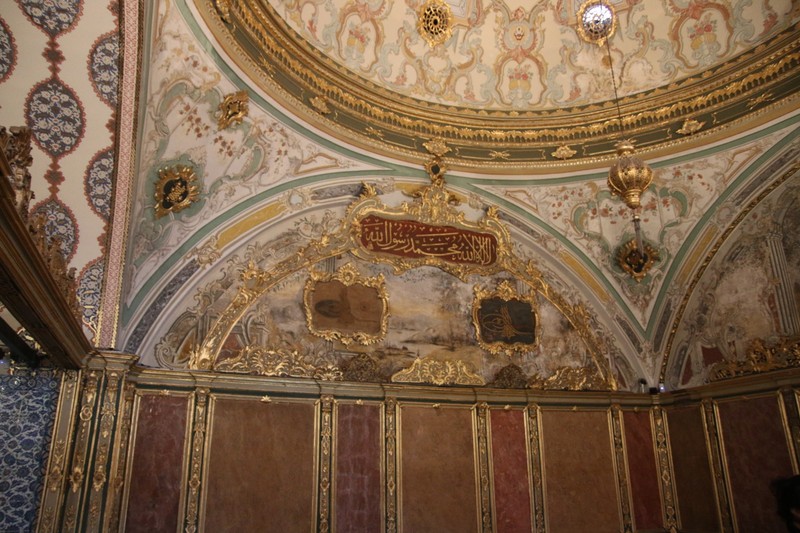 There is another, central, library which looks like a good place to have hung out 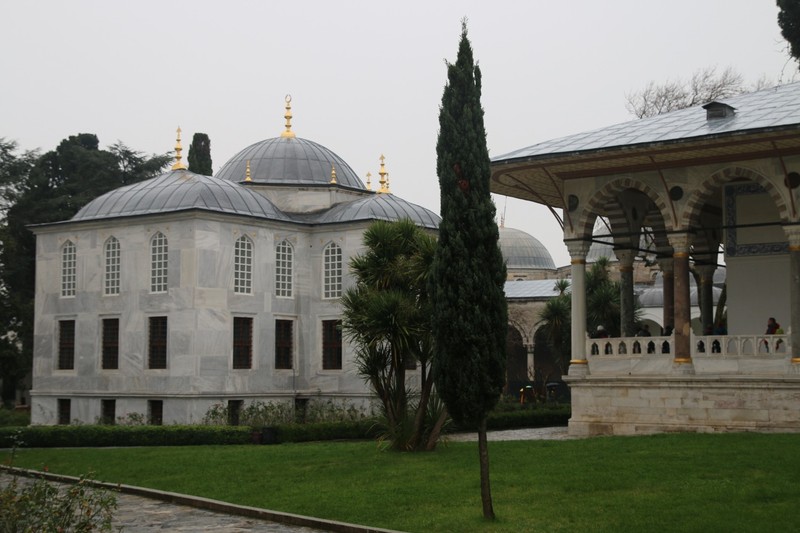 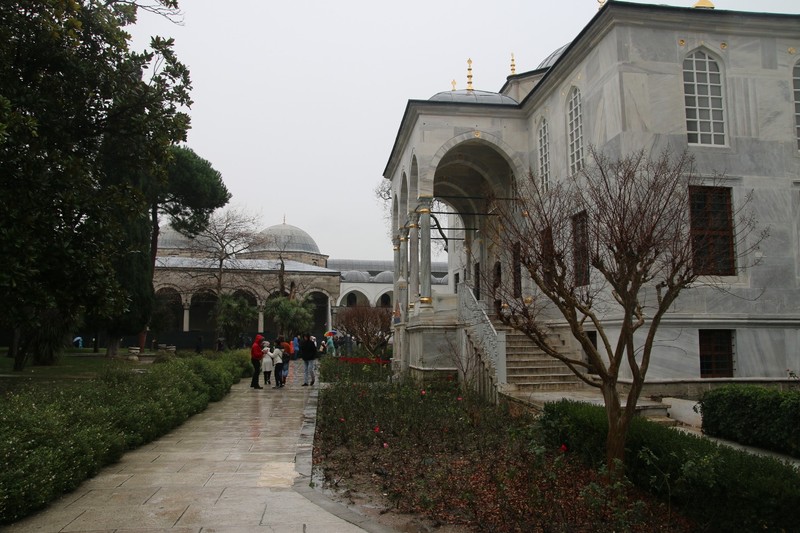 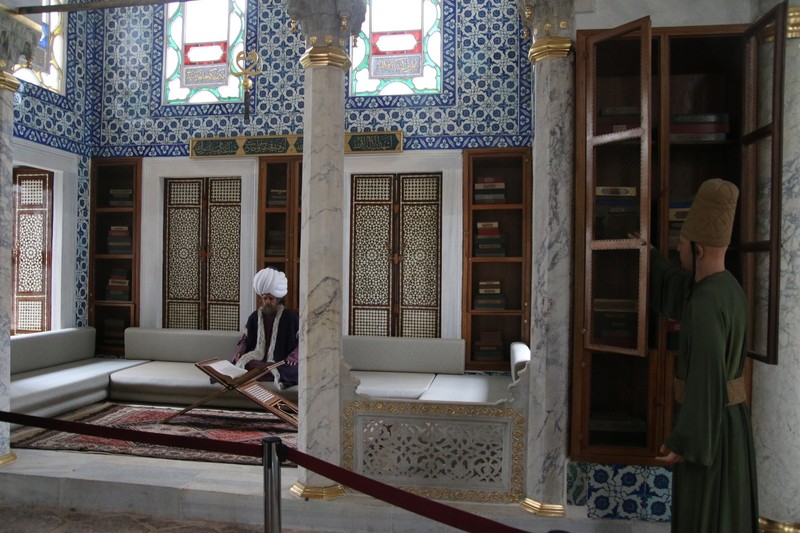 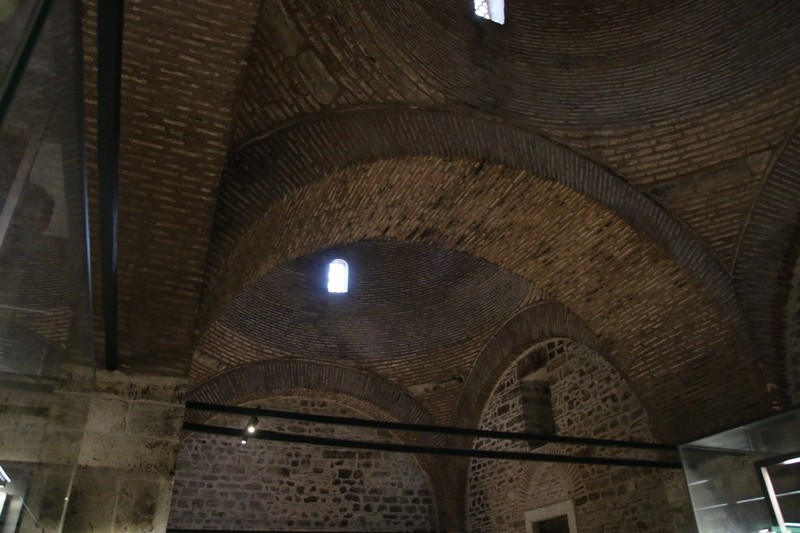 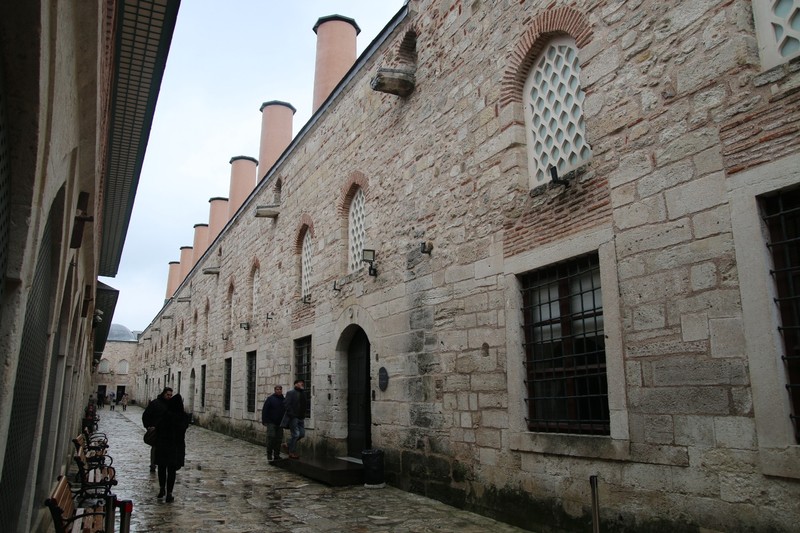 The next photos are just some I took as I wandered around, of things I liked the look of without necessarily knowing their function 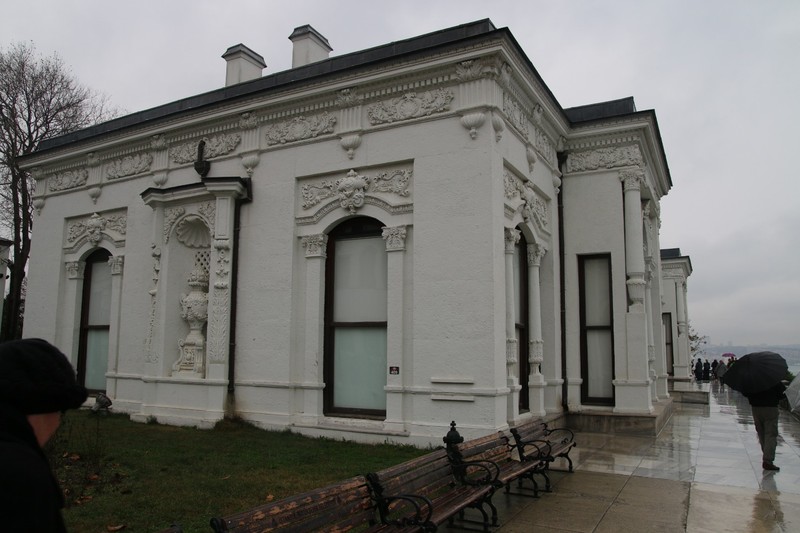 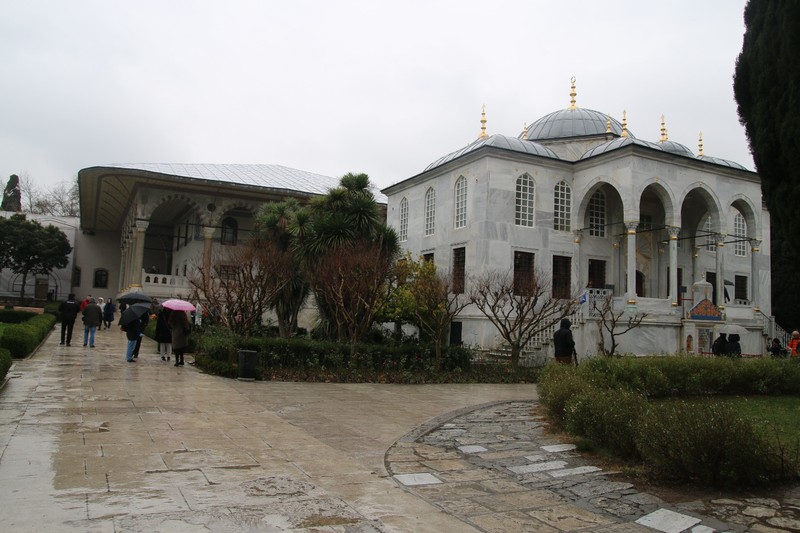 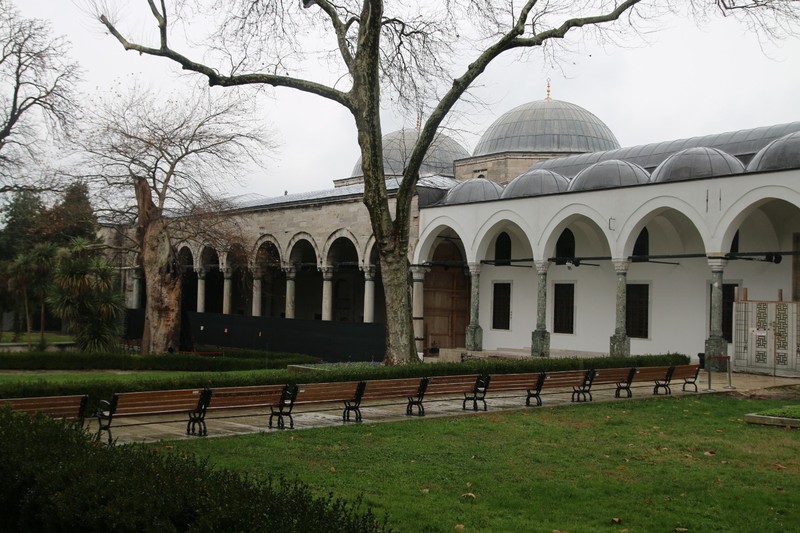 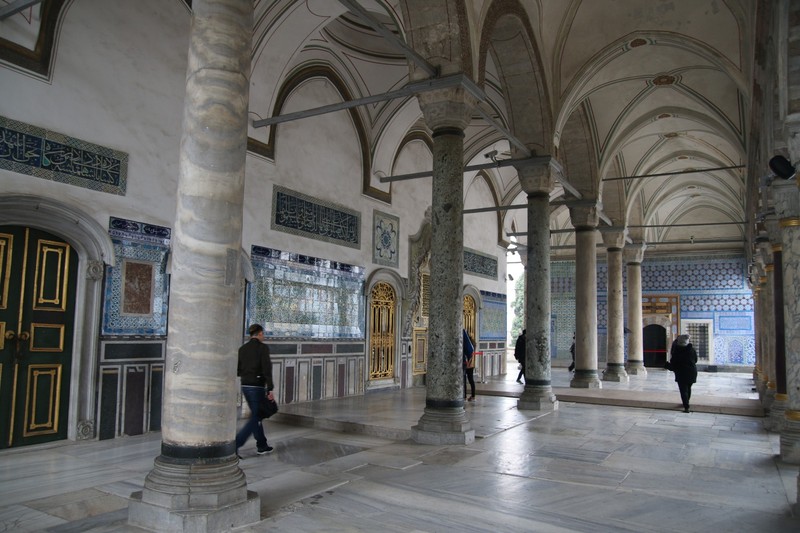 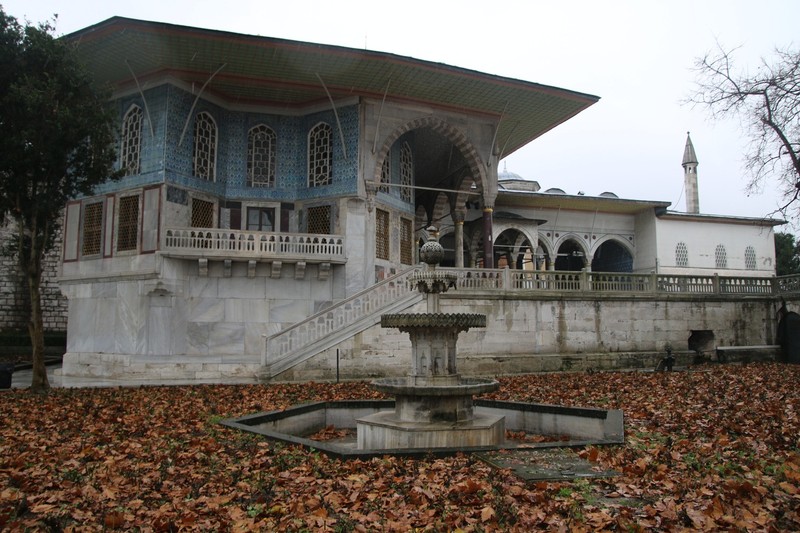 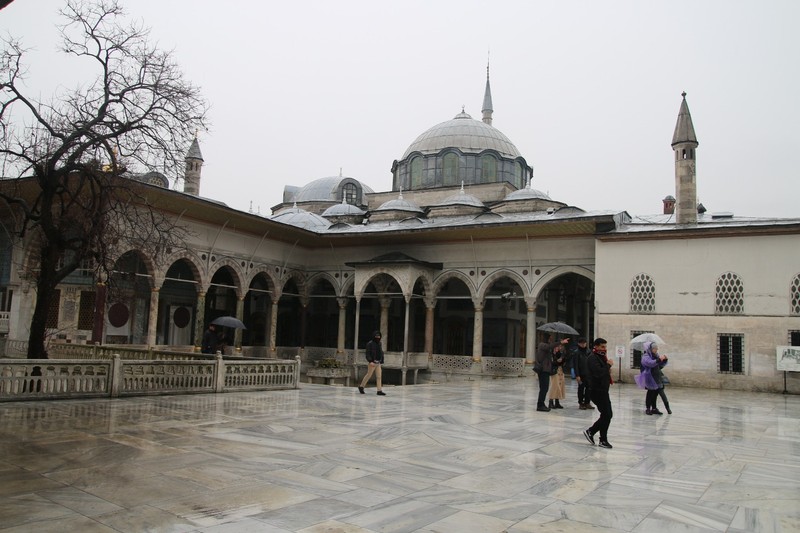 After emerging from the Palace, which must be one of the biggest tourist drawcards in Istanbul, I am surprised to find a kebab shop at the entrance doing a roaring trade, with everyone inside looking like locals, and uniformed wait staff - called Sultanahmet Köftecisi. It is bloody good - crunchy charcoal lamb, beautifully crusty bread, tasty tomatoes, a nice vibe.

Here are three photos of things that catch my eye - traffic control here is a bit more vigorous than back home, this University looks like it is falling on hard times and the mosque looks wonderful at night. 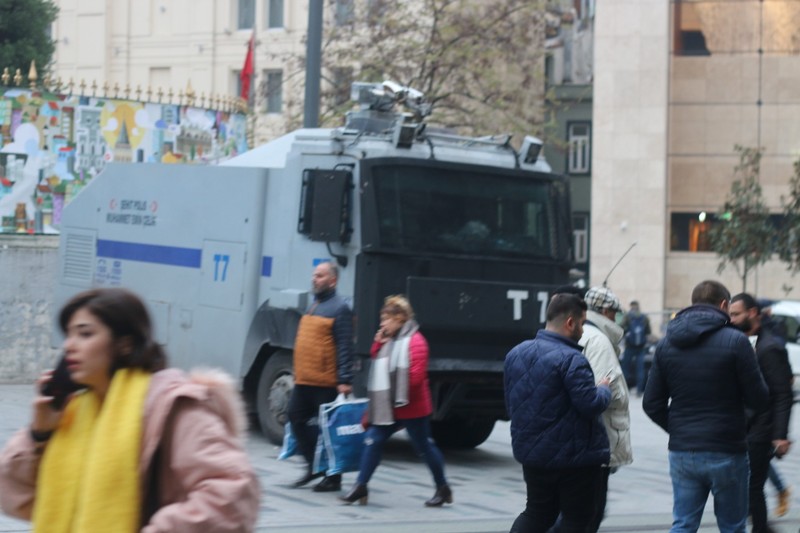 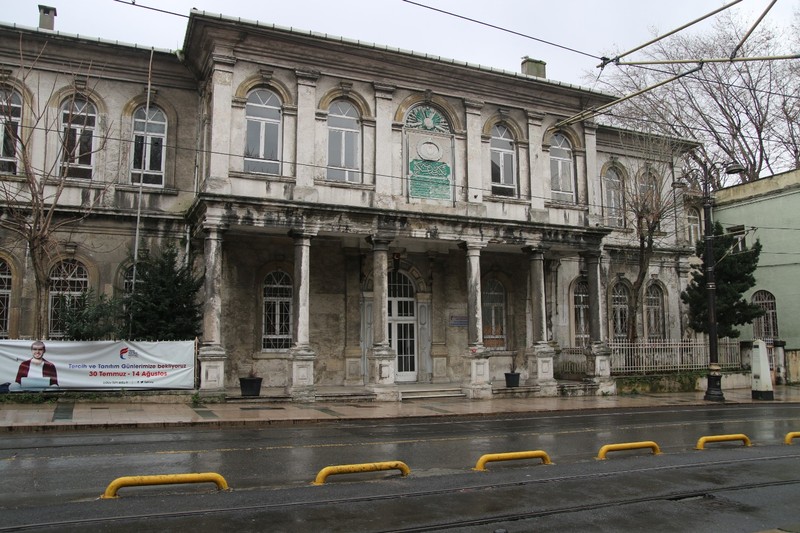 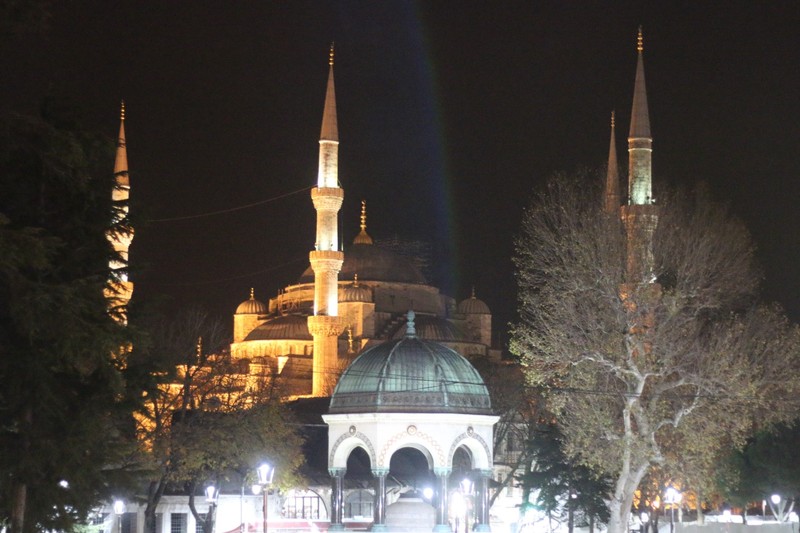 After a bit of a nap, it is time to start the evening - I catch the metro across to Kadıköy which various bloggers etc have mentioned as the next cool place in Istanbul. When I arrive, I think it has already done its dash - there are a couple of streets devoted to restaurants, all featuring a bloke who pounces on me as soon as I pause to try to find out their menu, and all seeming to have very similar menus. Not my scene at all. But a venture out of the centre into smaller side streets, and suddenly I get the feeling that I should not have left this until I am tired or my last night. There are many little shops selling boutiquey things, trendy food places selling posh burgers and the like, old fashioned tea shops where old men congregate to play backgammon and catch up on the day's events with their mates, bookshops, coffeeshops... I stop in at one of the tea shops and have my very first çay (chai) - black tea in a curved glass with a cube of sugar. I'm hooked! 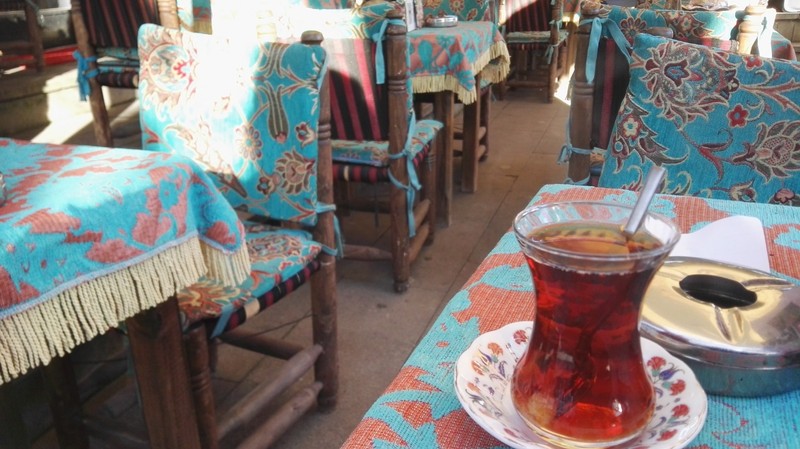 The flavour is a bit more robust than Choysa, and the hint of sweetness makes all the difference. I also find a combined bookshop and coffeeshop, so stop in - I think for cake and a cappucino, but am presented with a short black.

I venture back into the restaurant quadrant - I didn't come to Turkey to eat burgers - but the crowds have built up to the point I find this area unpleasant, just too many people for me to feel comfortable. I wander fruitlessly and catch the metro back to my hotel: I am obviously a bit fed up, as I even shout at a bloke trying to strike up a random conversation in the street. Eventually I spot an open air restaurant where I see chickens spinning on the spit: it turns out I do want familiar food after all. 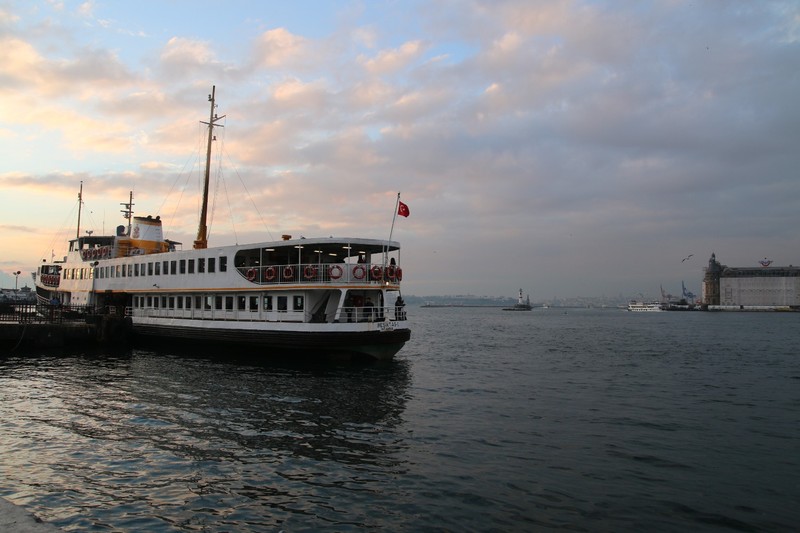 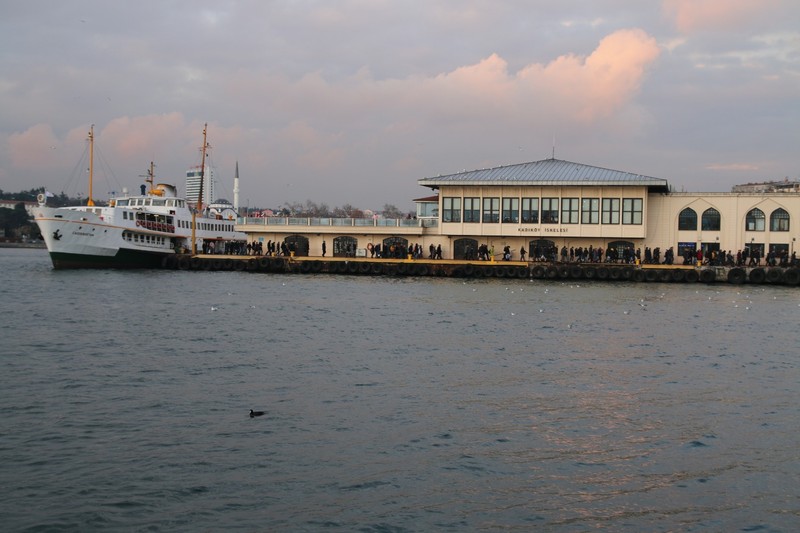 Posted by NZBarry 11:40 Archived in Turkey