Ankara to Kars - the Doğu Ekspresi

Ever since I saw someone post a video of their trip on this train, the Doğu Ekspresi (or Eastern Express) on Youtube, I wanted to be on it. It runs for 1,300 kilometres from Ankara to Kars: spolier - it is not an express. It makes many stops (47 allegedly) and is not fast at the best of times. When I booked, it was scheduled to take almost exactly 24 hours (55 km/hr), but I think the schedule has been changed to make it more like 28 hours. Second spoiler: my trip takes 31 hours (42 km/hr).

Apparently, the ideal way is to get a sleeper, but there are not very many of them and they get block booked by tour group operators. There are stories on the net of people sitting anxiously at their computers as the bookings open, and doing their best to score a bed. I decide to deal with the enemy, and get a travel agent which has something of a reputation for making the block bookings to get me a bed. I am somehow forgetful, however, and it turns out the bookings are well and truly open by the time I get them onboard - they report there is nothing doing. No matter - there are plenty of seats and they are dirt cheap - $13! - so I just make my own booking. The travel agent, wanting to earn its pound of flesh, then proudly announce they have bought me two seats on the train - not side by side so I can kind of lie down, no, they're much smarter than that - two opposing seats so I can put my luggage on one. No matter that there is a perfectly good luggage rack or that the seat is right beside the very noisy door. The seat I organised for myself is much nicer, and even had a working electricity outlet to keep my phone charged.

For some reason, Turkish rail are a bit coy about letting us see the loco in Ankara station and it is not until we make a stop next morning that I get a proper look at how long this train is - I am in about the middle. 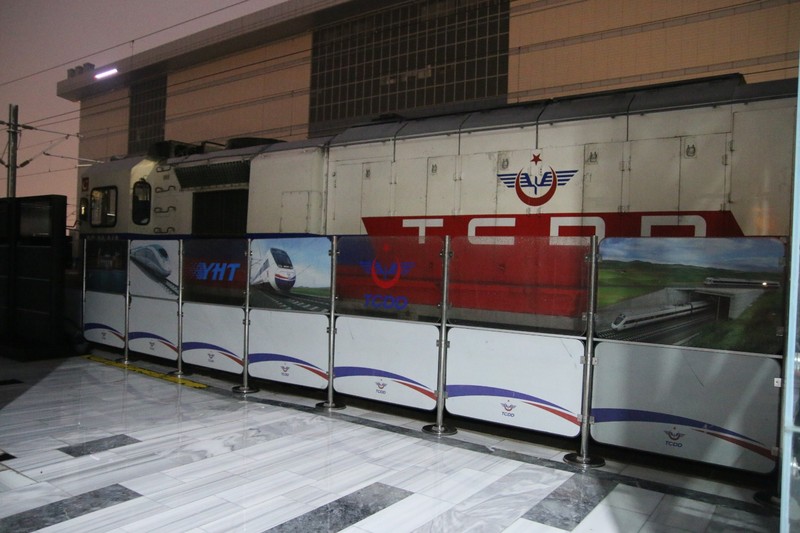 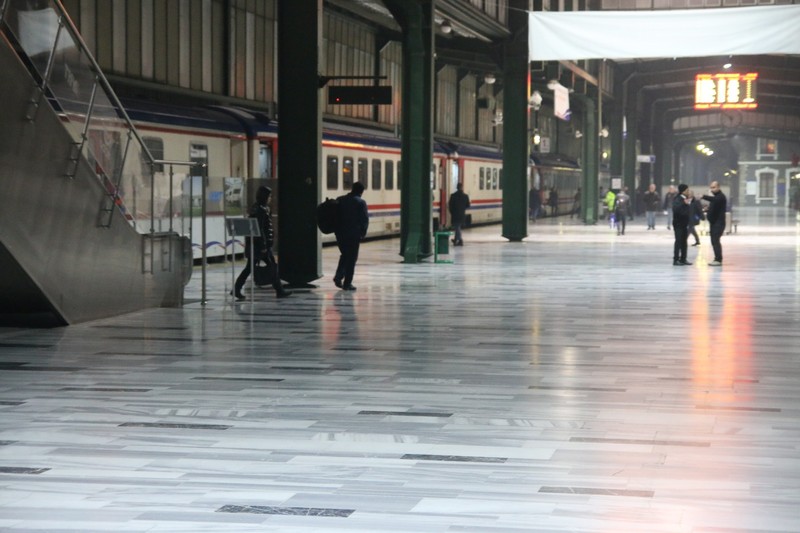 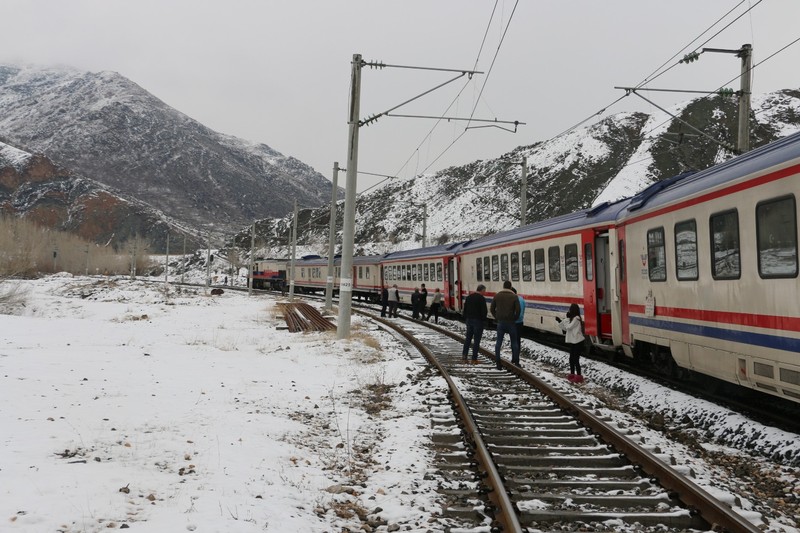 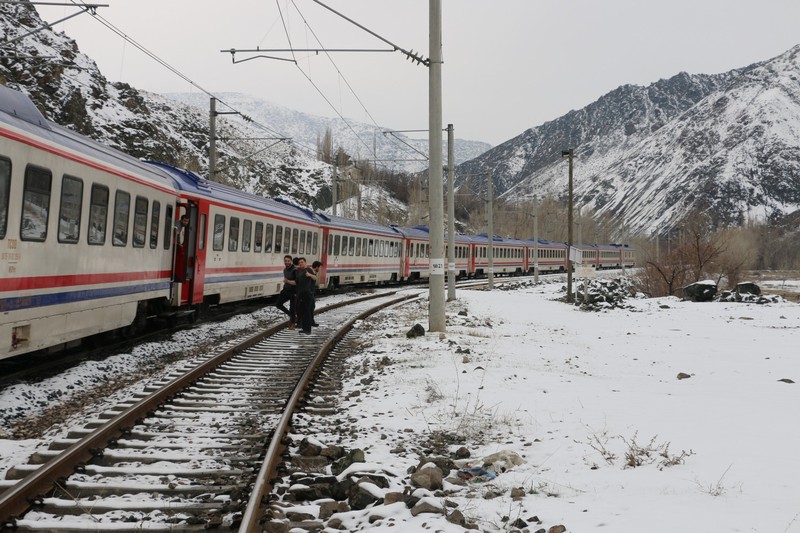 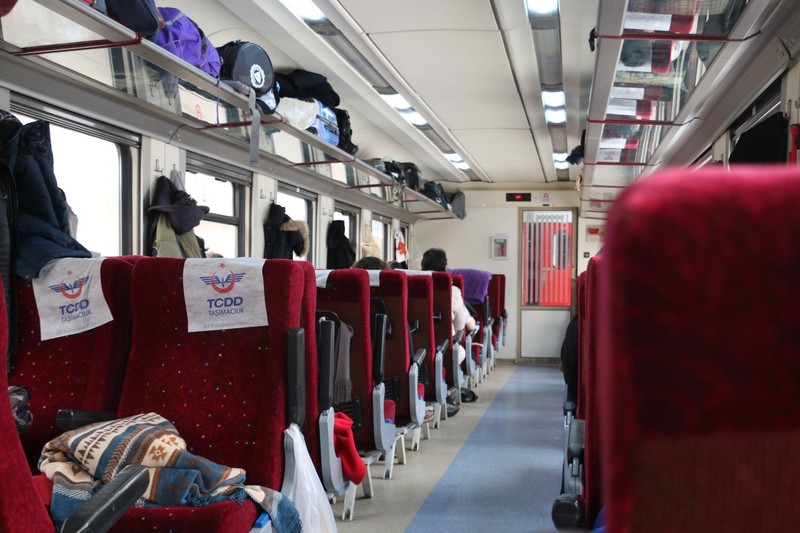 Here's the obligatory shot of the front of the train as it rounds a corner. 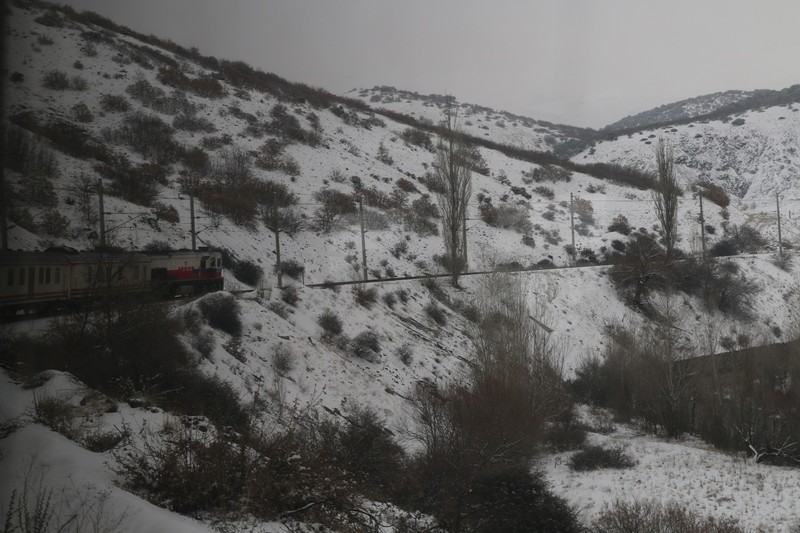 The train leaves on time to the minute, and I can see Ankara pass by, although of course it is already dark. By about midnight, I am feeling really pleased about this trip - there is something magical about a slow train making its way through the night, the turns it makes, the wonder at what is passing by without me knowing and the wonder at what will be revealed in the morning. I make a couple of trips to the dining car, for tea, for a change of scene, to read, even to get the laptop out and to write. At one point, a young face looks over my laptop to ask where I am from: he is part of a group of seven University students from Istanbul, trainee pilots, on the way to Kars for a holiday. Surprisingly, there are three Universities in Istanbul which train pilots: I do not think to ask which one they attend. They are a very good-humoured group, but English is difficult for them so we do not spend the night talking.

Instead, I have a very good sleep, and awake to find that nothing is happening: the train is stopped in a very small village. Nothing happens for about three hours: I do not know this, so when I go into the shop, and the shopkeeper gestures that I should sit by his fire and drink tea, I think that I must return to the train. Eventually, we move on and I can get a good look at this part of the world. 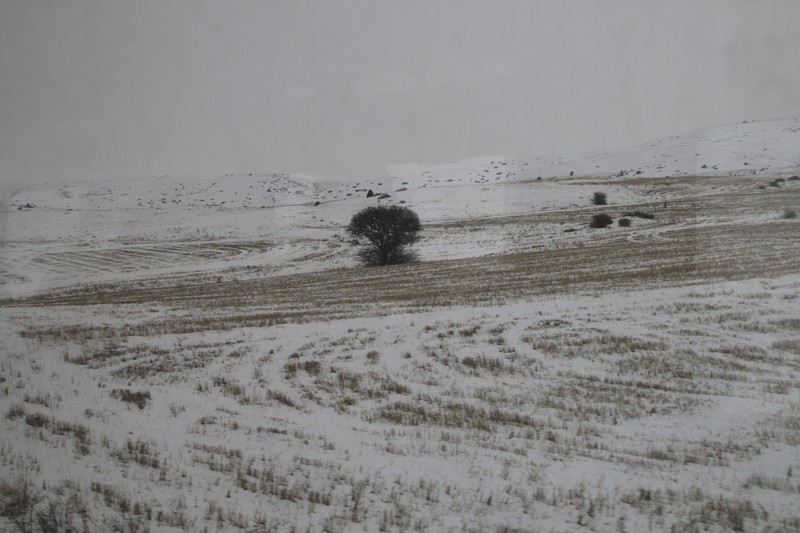 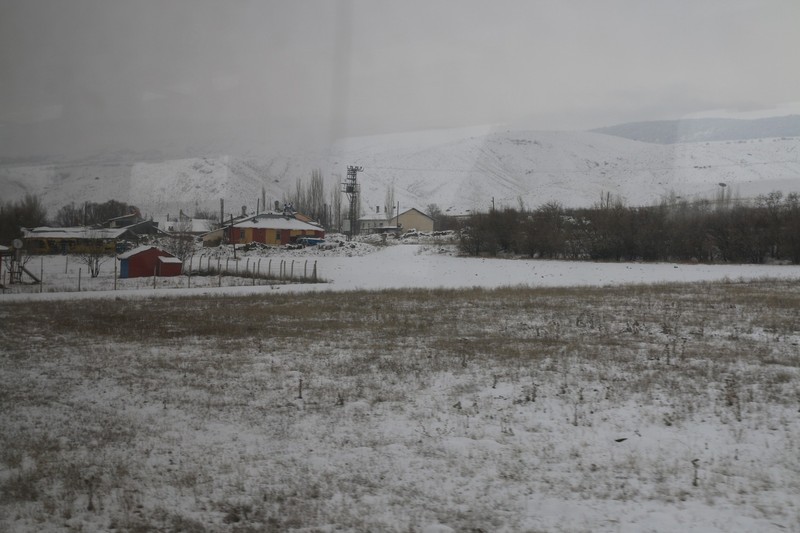 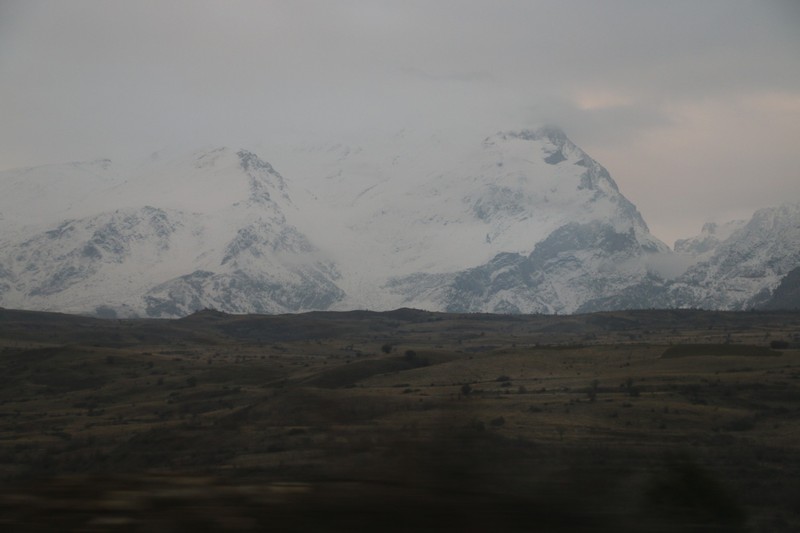 For quite some time, we follow a small river through what becomes quite a steep-sided gorge. 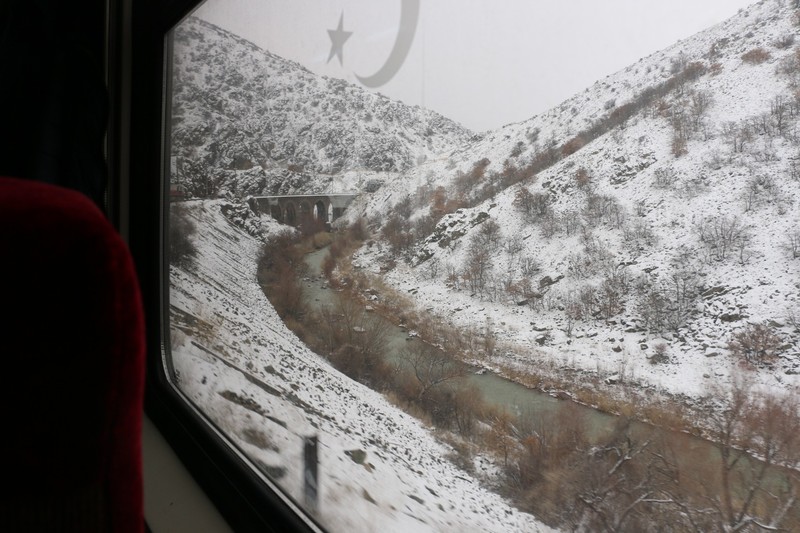 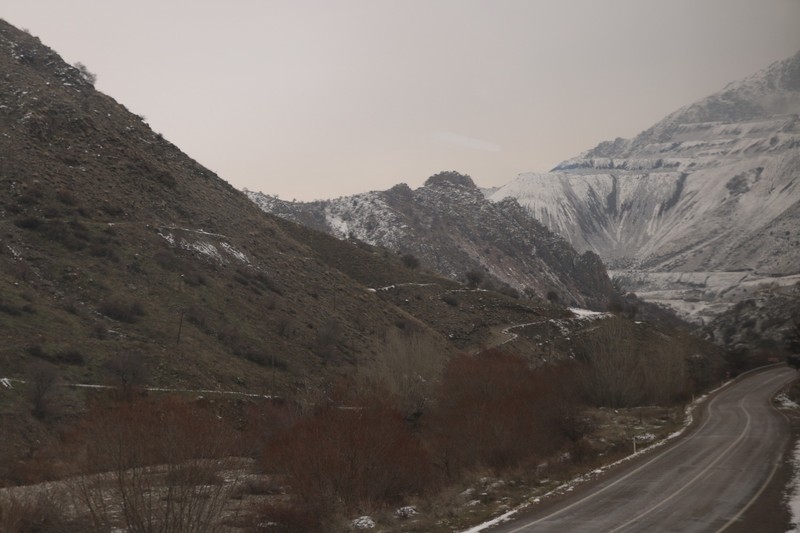 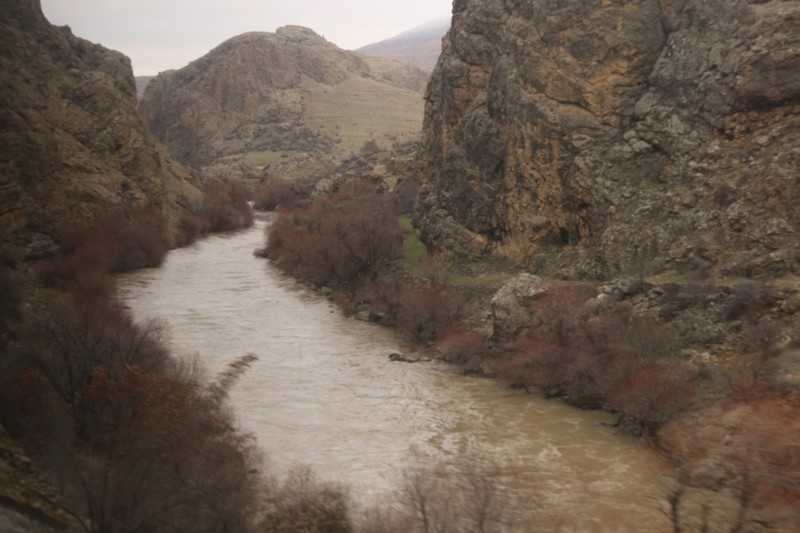 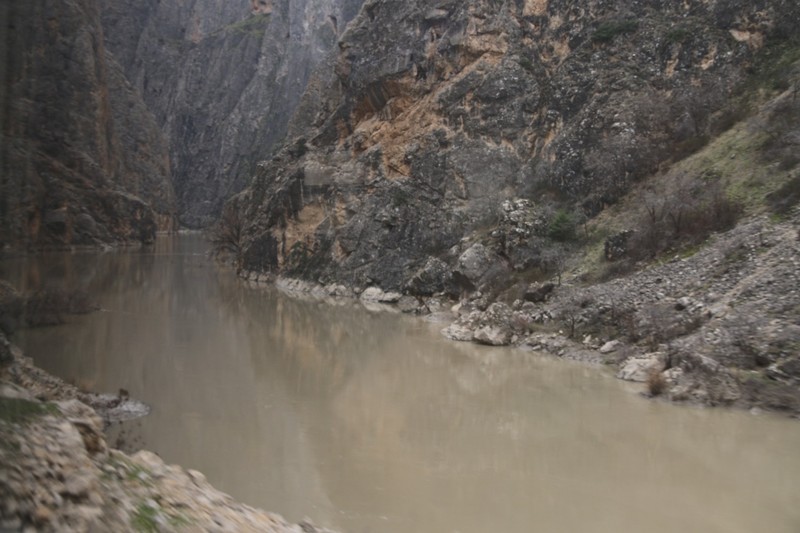 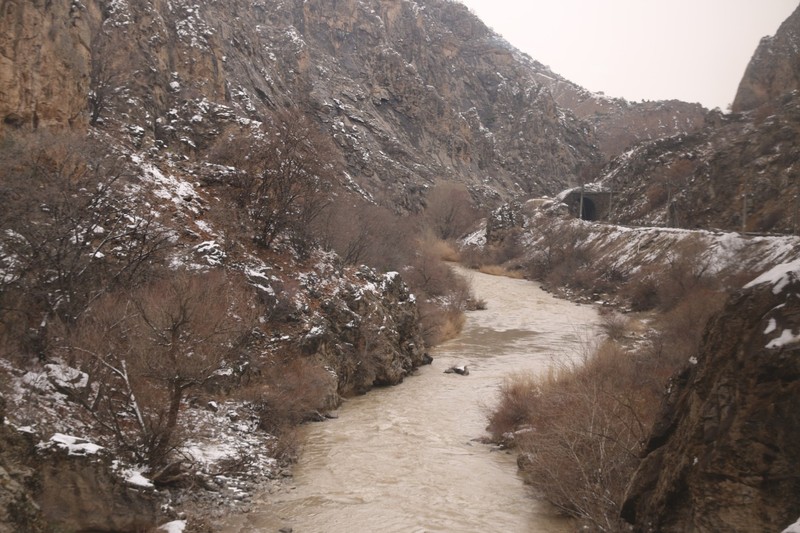 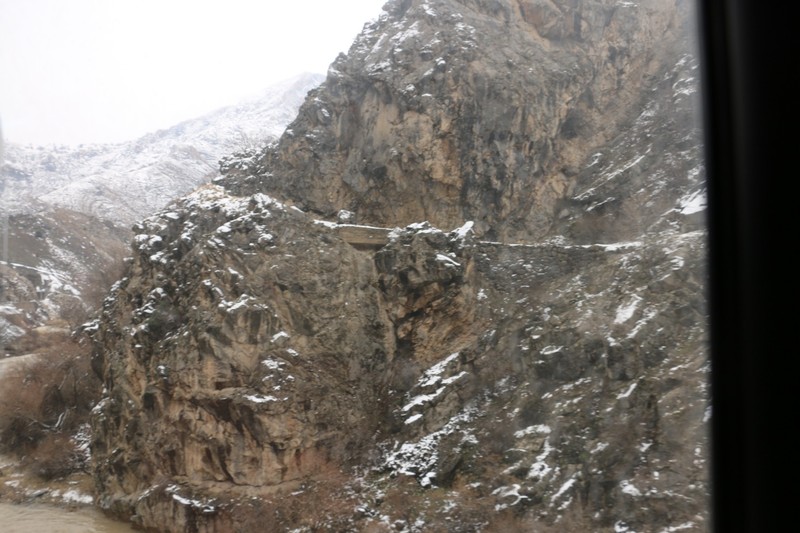 I am intrigued by that last photo - the narrow road carved out of the rock: when was it last used? How far does it go? It is evident that it is not in use, as there are sections where the cliff has collapsed, but it looks like it would have been a hair-raising journey for those who did use it.

Along the tracks, there are various stations and the occasional town to be seen. 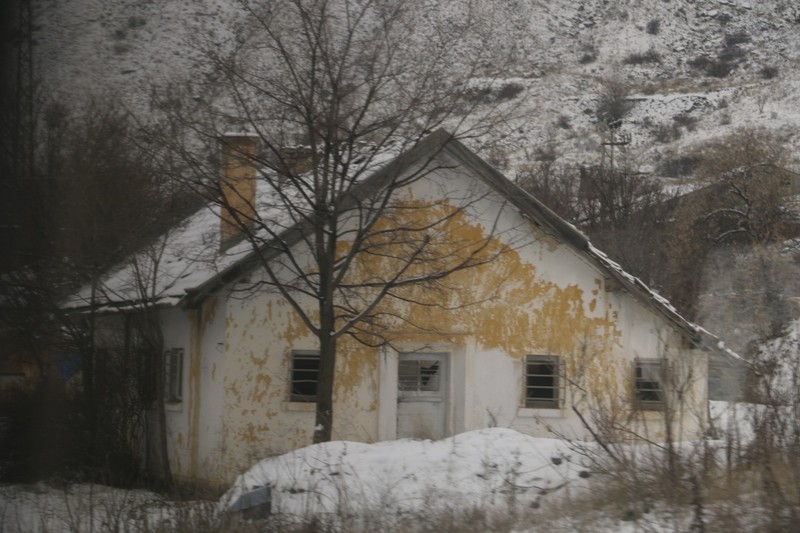 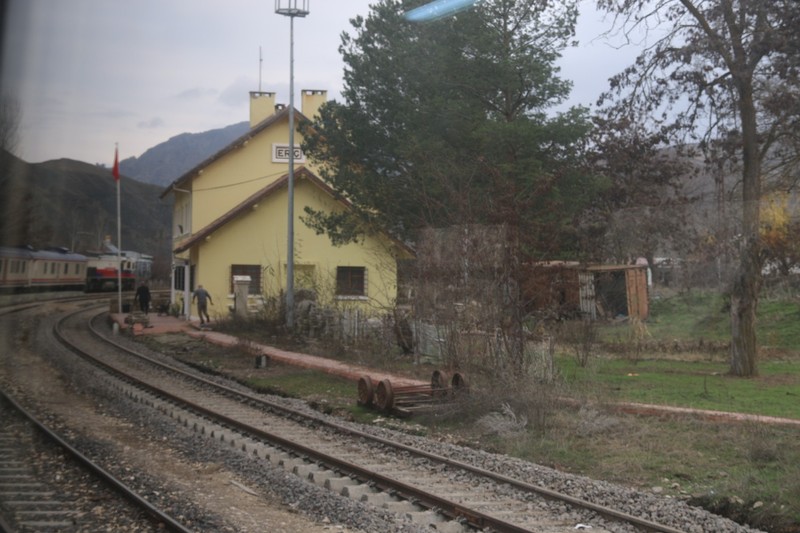 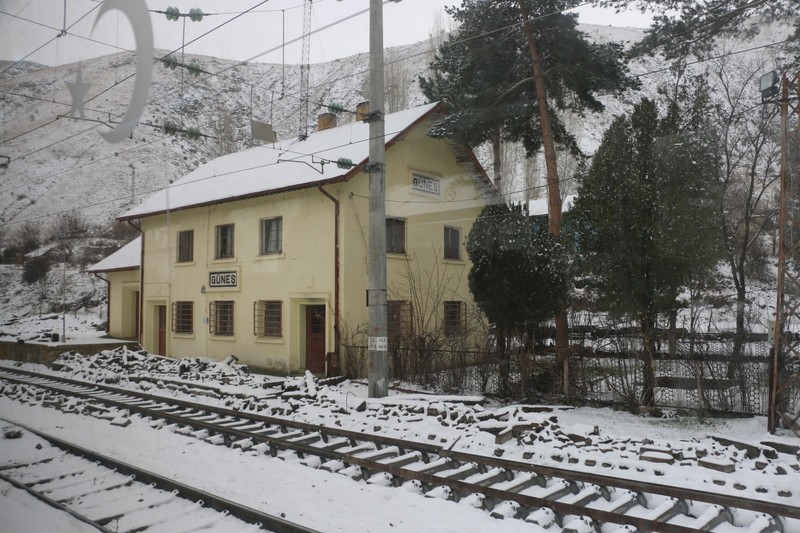 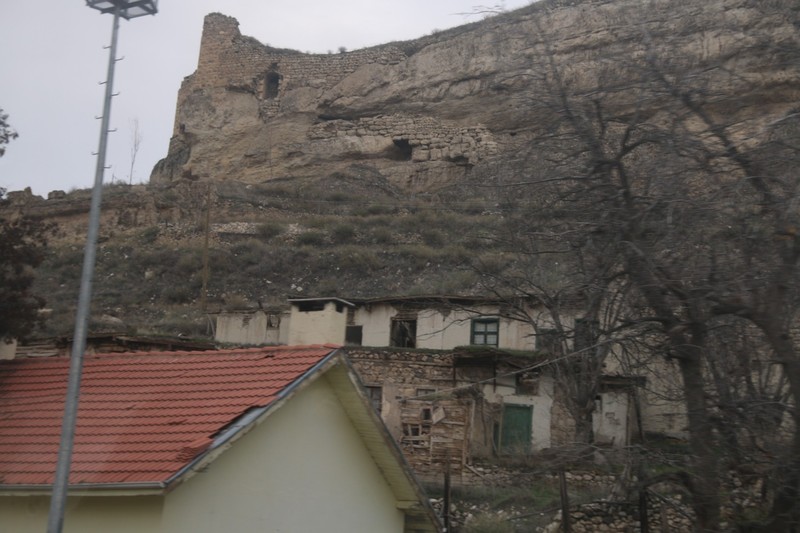 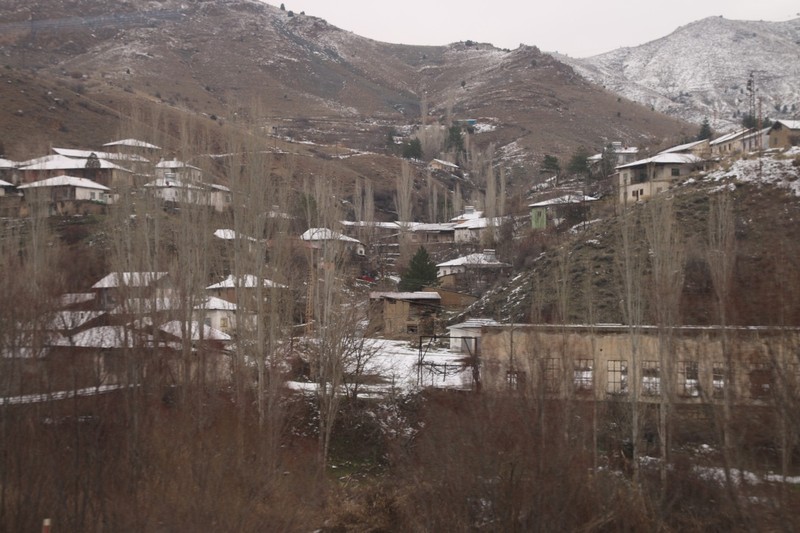 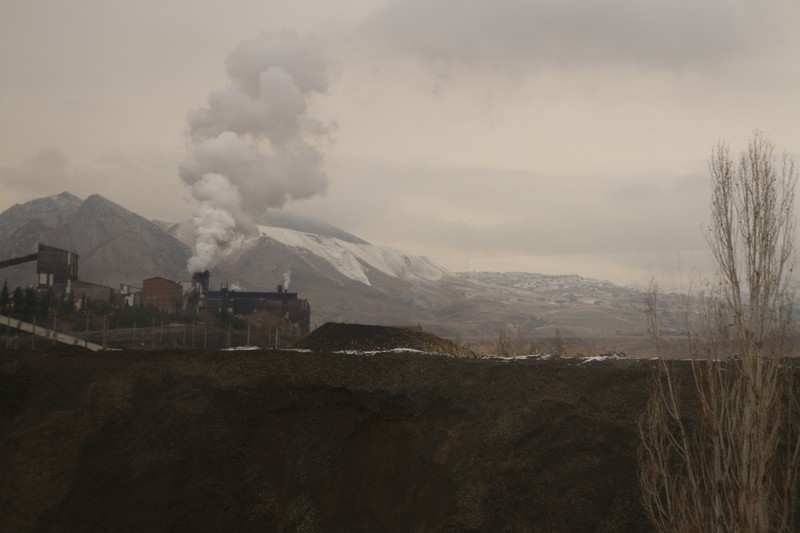 I occupy myself with the occasional doze, a wander through the train to see who is using my other seats or back to the cafe car for tea, keeping a watchful eye on the word outside or reading - Elif Batumen's The Idiot when there's light or Mick Herron's Slow Horses (on my tablet) when there's not. It is a great journey to take so when six p.m. rolls around and it is clear we are nowhere near Kars, I am not concerned. By about ten, however, I start to wonder what I am going to eat. I bought a foot long wafer biscuit thing at the store when we were stopped., but it is long gone The cafe car closed - at least I had the feeling we were all ushered out so they could do so - but then I see the group of trainee pilots go in, so I follow. Ah - success! A nice plate of kofte, rice, cucumber and succulent tomatoes.

The last hour is actually a lot of fun: there is a family with three young boys in my carriage - the boys get adopted by the trainee pilots, and they play all sorts of games and there's lots of chat going on - I don't understand any of it, but enjoy watching.

Finally, a bit after 1:00, we pull into Kars station - there are a couple of musicians there putting on a bit of a performance and the normal range of taxis and the like looking for people to collect, despite the hour. I have the direction to my hotel all mapped out on my phone, so walk it. It is a little eerie, being so late and so cold - not a sign of life apart from a couple of blokes wandering the street and a dog scavenging in a rubbish skip. Certainly no shops open to give me a warming tea or a lamb kebab. Even my hotel is deserted and all locked up when I get there, despite the promise of 24 hour check in. This is a little disconcerting - I wander back and forth a little, perhaps utter a slightly wrathful word or two, certainly a wrathful rap on the door with the only metallic object I have - my cellphone. It survives, luckily, and there is a sudden movement within. 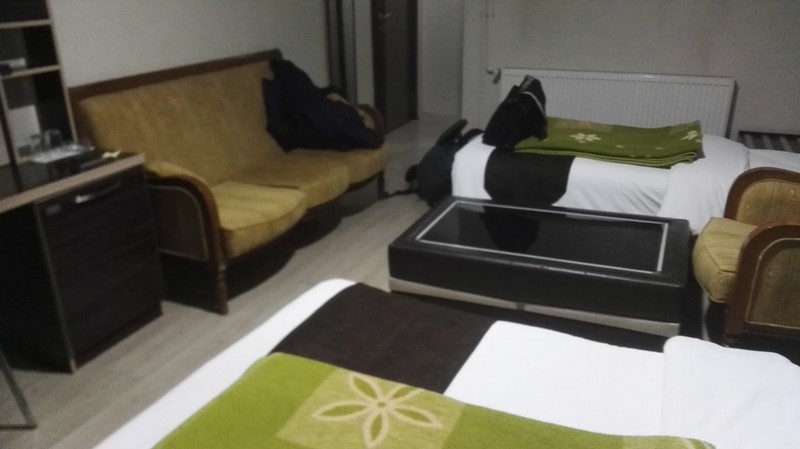 Posted by NZBarry 14:00 Archived in Turkey

Hi Barry,
I've been following your blog. I've thought about doing this trip for years, I've always wanted to go to Baku and this is the year I've picked. I'm currently in Istanbul and plan to leave on Febuary 1st. I wish I'd done all of this when I was younger, I'm 73 now, and find I get tired easier than I did just a few years ago. A question I have about the Dogu Express did you get a sleeper or only a coach seat? And if a seat was is comfortable enough to get some sleep? I'm not sure you're going to Armenia but I hope to take that route to Baku. I enjoy your story. Good travels to you.
Howard

Thanks, Howard. I didn't get a sleeper, but the seats were comfortable enough to sleep in. They are also cheap enough to get two side-by-side if you want to spread out a bit.

I did get to Armenia (just Yerevan) and Baku, but if you want to see both you have to go back to Tbilisi, because the border between Armenia and Azerbaijan is closed.