By marshrutka to Kutaisi

My next destination is only vaguely on the rail map: I can get there by train, but it is awkward and slow. By road, it is about three hours. I have been on a couple of shared minivans - marshrutkas - but only for short distances but since there is no alternative, this is what I must do. These things tend to be Transit or Sprinter minivans, with a huge number of seats - 7 rows. Here's a Russian one, since I forgot to take any photos of mine. 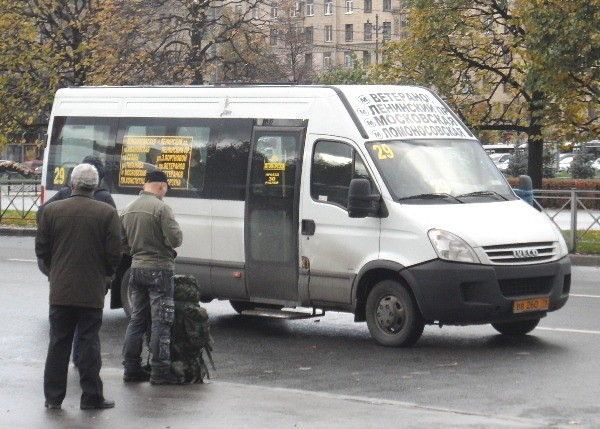 As I am heading to the bus station, I notice a couple of marshrutkas on the side of the road, bound for Tbilisi. Just pausing is enough for a driver to emerge to try to get me onboard: when he hears I am going to Kutaisi, he summons his mate, also bound for Tbilisi but via Kutaisi. There is a bit of confusion over the price: I am sure he is asking for 220 Lari, which is about $100, and so I remove my bag and start walking. This gets the attention of both drivers: they confer and say the fare is 10 Lari, even pull out the notes to show me. So, it seems I am off to Kutaisi for half the proper fare.

The land is quite similar to what I saw in Turkey, although a bit less rugged and scruffier. I can't take photos - the windows are clean enough to permit it. We stop periodically to drop off or pick up passengers. Although most towns have regular stopping points, all you have to do to catch a marshrutka is stand on the side of the road: since standing on the side of the road seems to be a favourite Georgian activity, we stop for lots of blokes who don't want rides. We do get there eventually, and I am let off near the railway station, on the main road to Tbilisi. I immediately regret my choice: I had heard that Kutaisi is nice, but this is not. All I see is a line of crappy looking shops, a McDonalds, a bus station with a horrible looking hotel above it, heaps of traffic and rain.

I have not booked anywhere to stay, so that's the first thing to do: there's a hotel which looks decent about a mile up the road. Booking it turns out to be a stroke of luck: I am pretty wet by the time I get there, but the fellow on reception looks after me - carrying my bag up, turning the heating on, finding me a hair dryer and getting me settled in nicely. I think the best thing for me to do is take a nap until the weather clears. Another stroke of luck: my walk in the rain has brought me to within a kilometre of the old town. Not that I know this - I set off in what I hope is the right direction for food. Everything is really quiet and I begin to wonder if the town has closed for the night, when I spot a pub in which I can get some dinner and a drink. There appears to be a band performing upstairs, but I am not really in the mood: instead, I carry on walking.

The centre of the old town is not very big, but at night, it is magical. Many of the buildings are in really good condition, and when lit properly, look amazing - to the point that I decide I will stay another night, but this time in a hotel in the centre. The city itself claims to be one of the oldest cities in the world, having been here 3,500 years or more. It was the capital of Armenia for a while, a thousand years ago, and the capital of the Kingdom of Georgia after that. The Georgian Parliament is here - even though Tbilisi is the capital - but I forgot to go look for it. With its long history, there are a number of ancient churches around - such as the Bagrat Cathedral which sits on a hill overlooking everything - but I only venture into one. Its interior surprises me, as there are no places to sit. 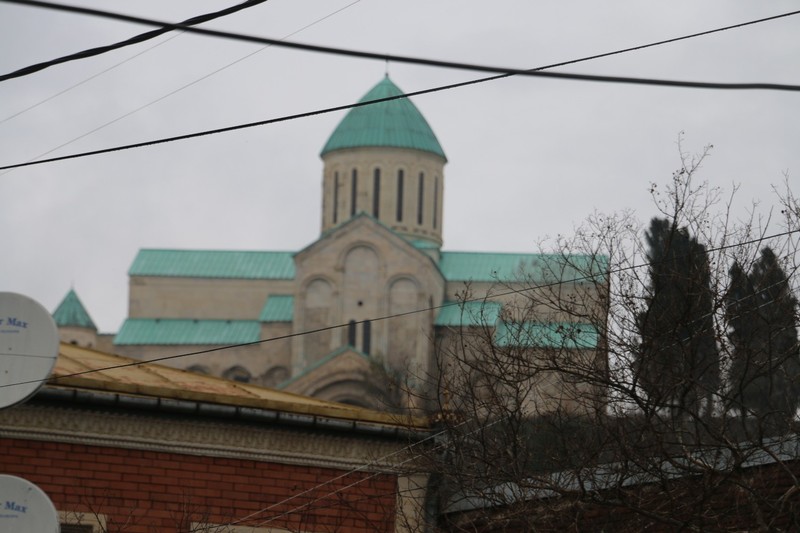 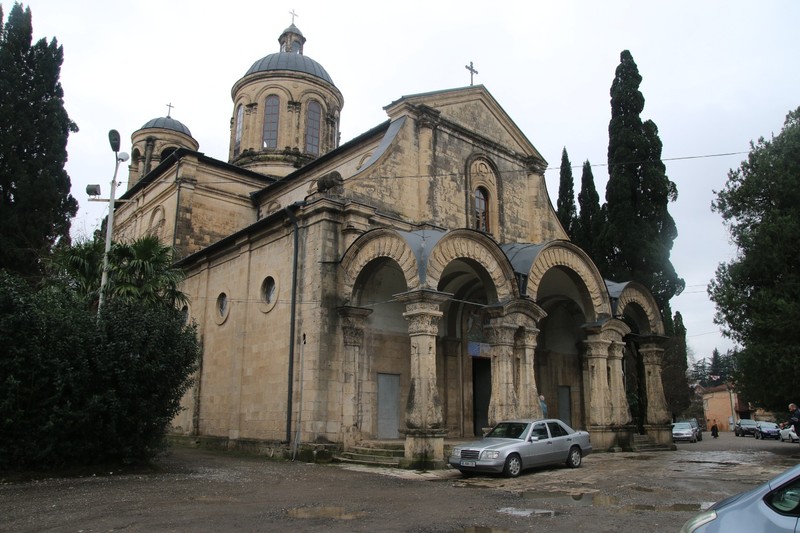 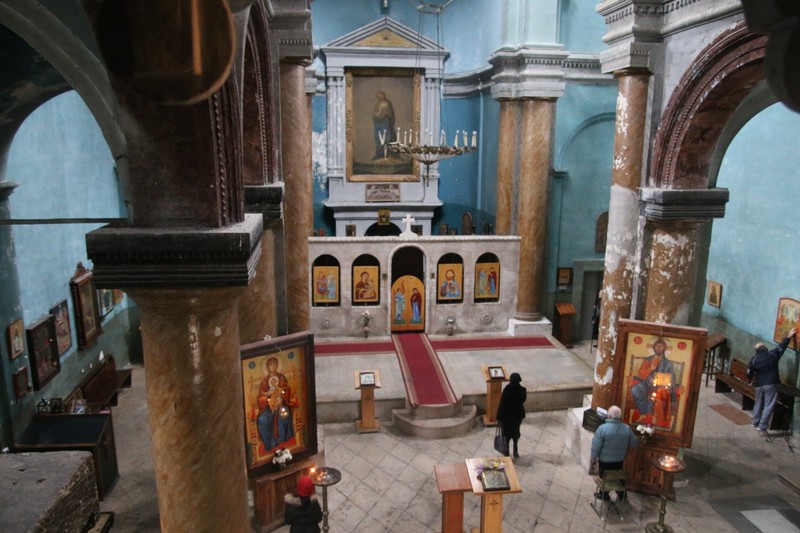 Even the schools look amazing - this is the Kutaisi 3rd Public School, and a couple of the surrounding streets. 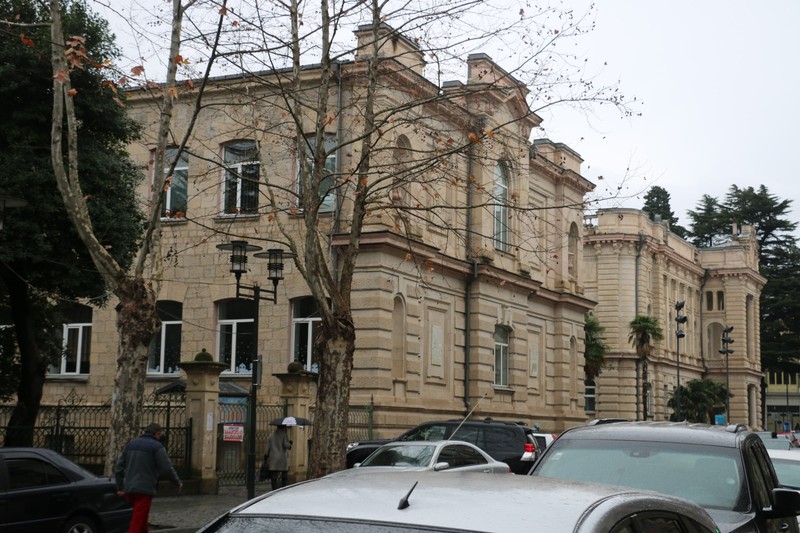 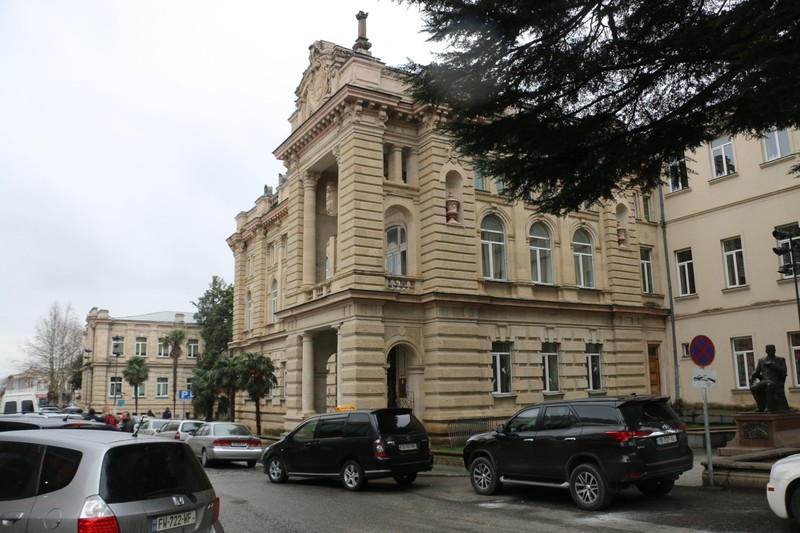 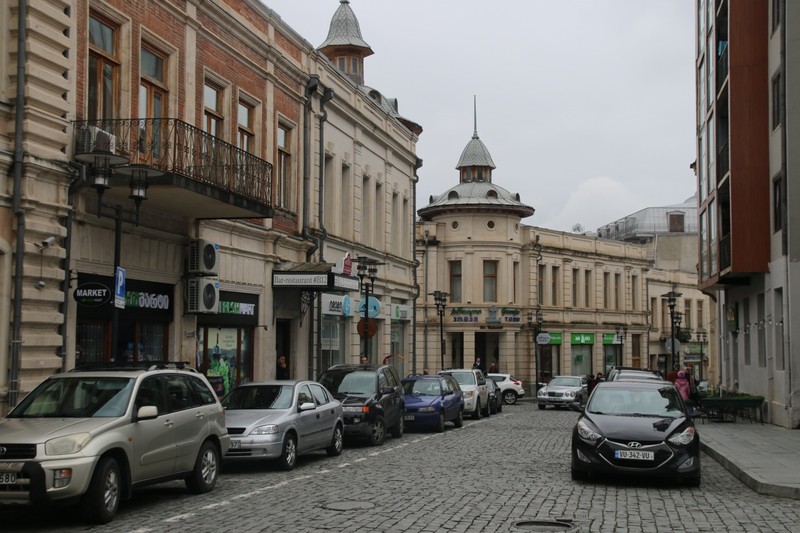 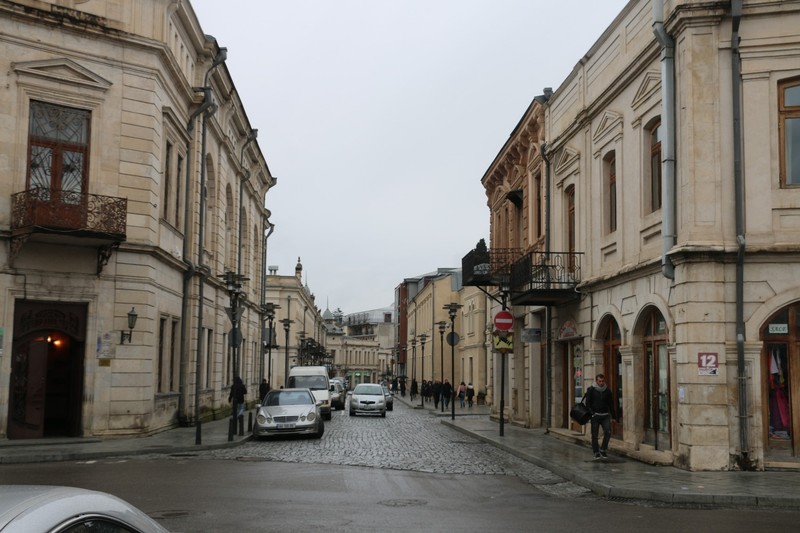 The commitment to funding spaces for art is impressive. There's a big opera hall and a drama theatre (the Meskhishvili Theatre, in honour of an actor who was a big deal here at the end of the 19th century). 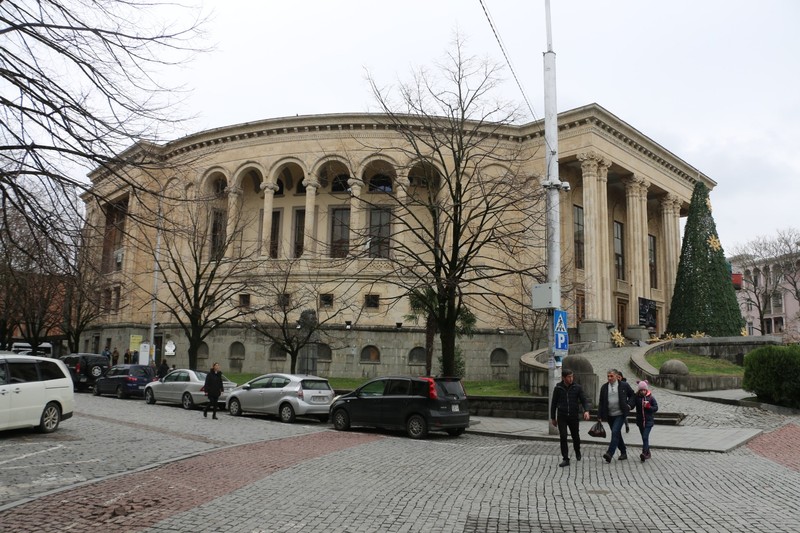 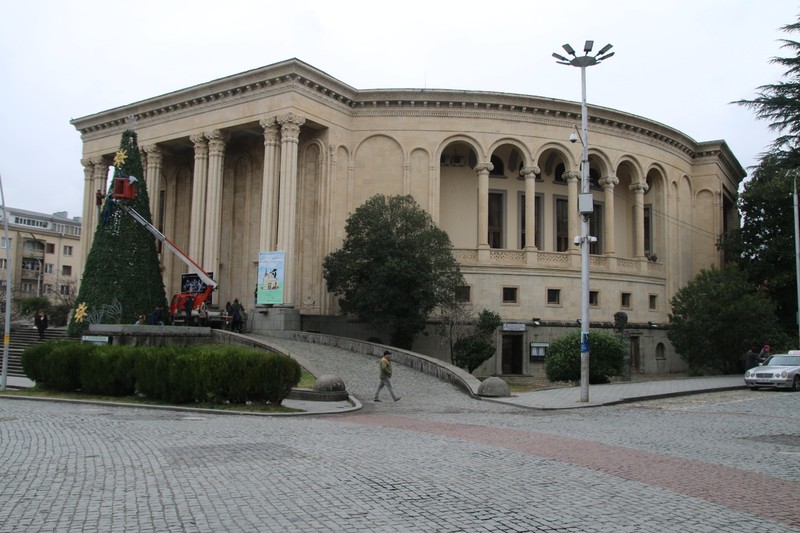 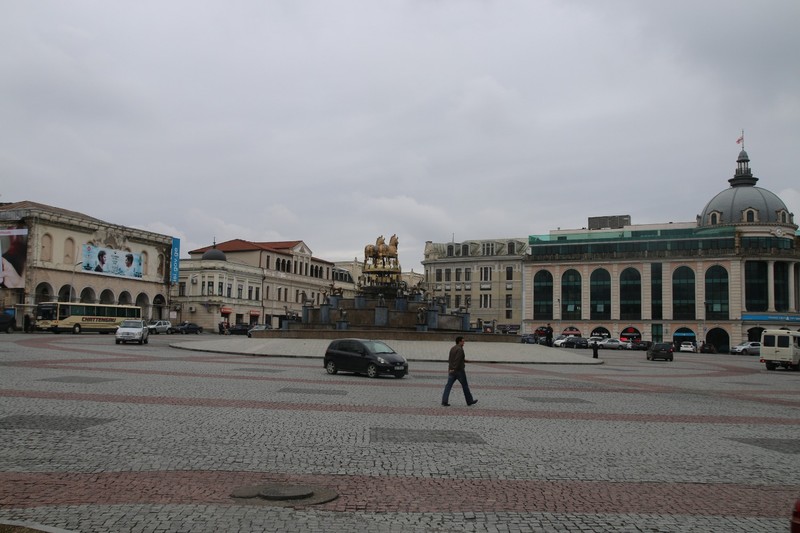 I tried out two more forms of Georgian food here: the first is khinkali, a spiced meat in soup in a dumpling. The soup drained out too quickly, leaving me with a rather heavy dough. Apparently you don't eat the stalks - they are counted up by the staff so they know how much to charge. People have told me of more than 30 being eaten in a sitting! Not really for me, but I adored the cafe in which I ate them - Our Cafe. 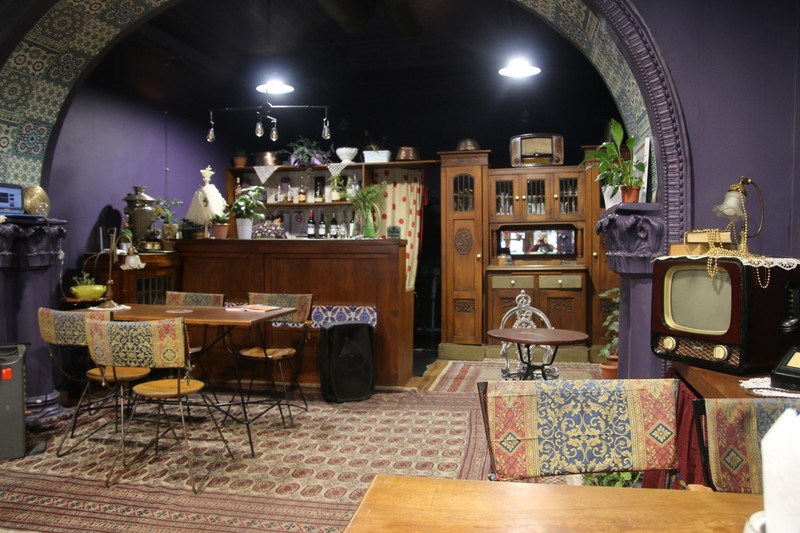 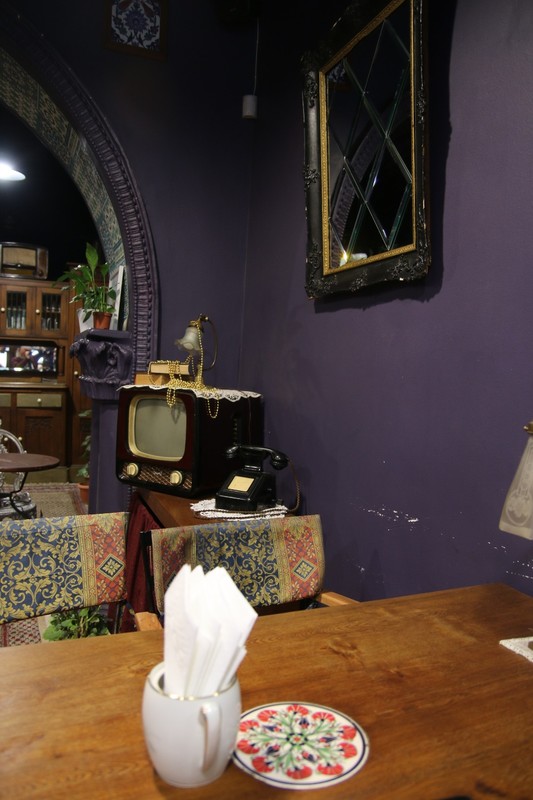 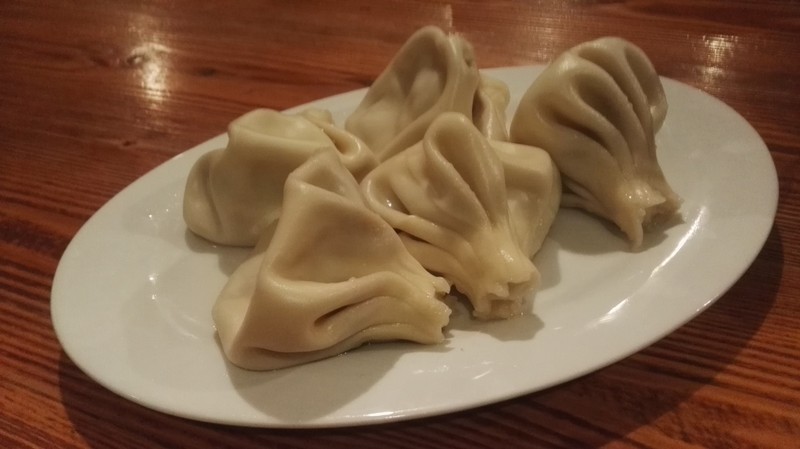 Ojakhuri is a much more palatable discovery - it is basically chunks of potato and meat (normally pork) roasted together with onions and peppers and lightly dusted with spices. Yum. This is a dish I repeat. Several times. 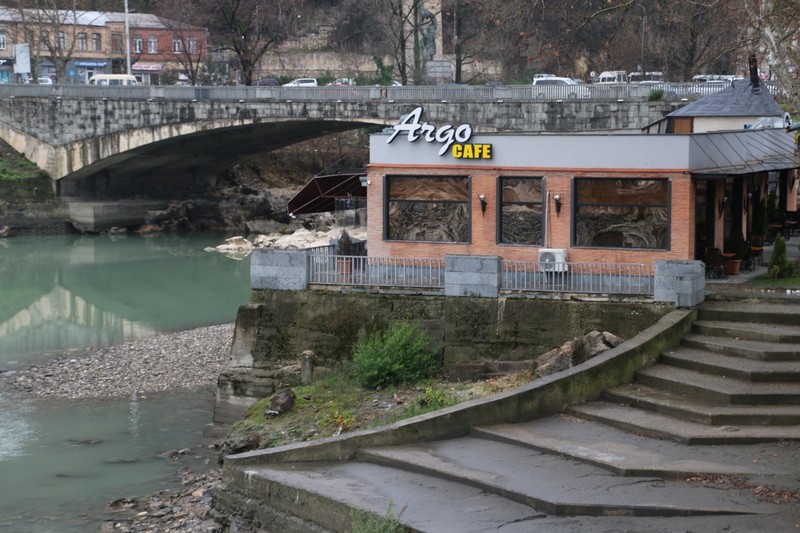 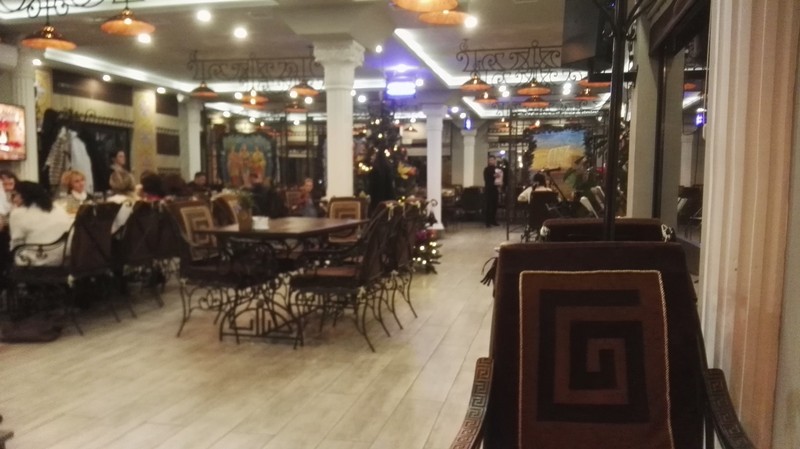 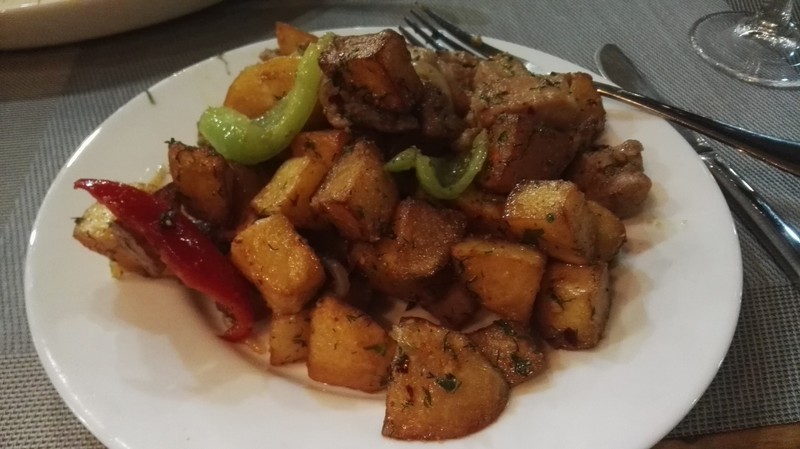 Posted by NZBarry 12:36 Archived in Georgia