So, part of the forward planning I did way back in September was to book a Travelodge in Oxford for a weekend. This involved another tedius bus trip. National Express this time - we stopped for half an hour in Stratford, not to honour Shakespeare, but to let some woman who had a ticket to somewhere north of Birmingham argue her way onto our bus (heading SOUTH from Birmingham). This gave the bus driver and his offsider half an hour's worth of speculation as to what she was up to.

I had no idea where my hotel was in relation to Oxford - luckily I spotted it just after we came off the motorway, well out of the centre of town (4 miles, apparently). The drive in to the centre was so appealing that I decided to walk back, up the Woodstock Road, past various Colleges and fairly grand abodes. I wouldn't have been so keen to walk had I known how infrequent the buses back into town were - I just missed one, and the next wasn't for an hour, so I walked back, getting in just as the shops were shutting. Hordes of people about, pubs and restaurants thriving, streets massed with hurrying people. I wandered into a flash looking burger place, Gourmet Burger Kitchen, and was a little puzzled to find Steinlager and Macs Gold on the menu but the waitress clarified - it is New Zealand owned (apparently Peter Gordon, a sleb chef from New Zealand, designed their burgers).

Slow start on Saturday, it was about lunchtime before I was back in town, on a mission to find Blackwells (the bookshop). Unfortunately, I was diverted - between the two entrances to the main shop is this quaint and very old little pub, not much bigger than my office, the White Horse (Inspector Morse favours it!). I had to go in for a pint, and maybe some lunch. Unfortunately, the food on offer didn't really appeal, so I enjoyed my pint and went wandering for lunch but got hit by a further diversion - a conducted tour of the Bodleian Library was about to start (isn't it just as well I travel by myself!). I have to say, it is one of the oddest conducted tours I've ever been taken on - we spent all but the last few minutes sat in the Divinity School being told about the history of the place. The way it was told, both Oxford and Cambridge were basically started by a food fight! When the King of France got tired of English scholars hanging about in France (I think at the Sorbonne) he banned them, and they congregated in Oxford, around a cleric. But they received poor treatment by local publicans and the like and, to show their displeasure, some students threw beer over a publican. This escalated to two students being hanged; then the powers that be (the King, I think) said that students should be treated better and thus the wheels started turning to start Oxford University. They took a while, and in the meantime, most of the students thought "fuck this, I'm off to Cambridge" and thus the university was established there.

So, yeah, after being told lots of tales like this, we were hoozled into the library, into its oldest part, but couldn't speak (it IS a library) or take photos, then the tour was over. Two photos I did take were in the Divinity School, which has an extremely intricate (and very difficult to make) ceiling: 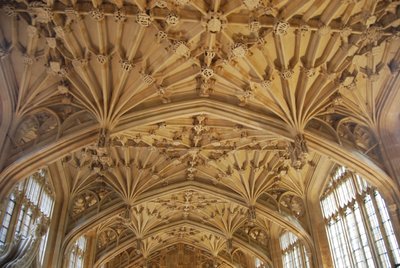 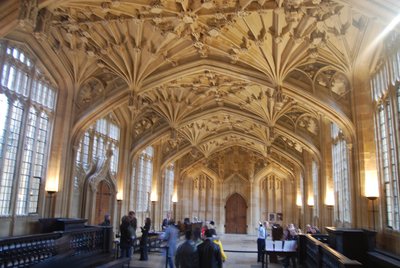 All in all, by the time I finally got to Blackwells it was closed, so I wandered around the central city for a bit and out to a suburb called Jericho, where I'd heard there was a cool pub and an arthouse cinema. I found the latter, but got distracted by another pub while looking for the former. Back at the hotel, I couldn't resist; there's a TV programme on, "Big Chef takes on Little Chef" in which Heston Blumenthal (a bit of an avant garde sleb chef) was revitalising the menus at the infamous chain of motorway-side restaurants, and there was a Little Chef beside the hotel. As it happens, all I had was a very nice piece of apple pie and some turgid coffee.

I spent all of Sunday afternoon in the various arms of the Blackwells empire (they have a music and an art shop in addition to the central bookshop) where I was compelled to spend at least two hours, rifling through books and people watching. I think Powells in Portland might be bigger, it is certainly more chaotic in its layout, but Blackwells is plenty big enough. In between visits, I had afternoon tea at the Queens Lane Coffee House, which claims to be the oldest continuously operating coffee house in Europe. At some stage, I also went for a wander along the canals 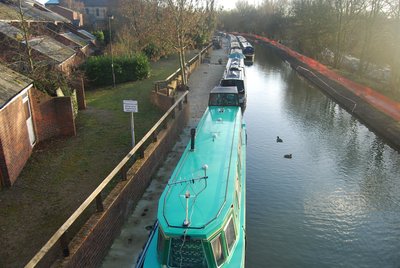 Back "home", I had a further couple of nights booked in the Wolverhampton Travelodge before moving into the Birmingham Central one. This one is so badly reviewed on tripadvisor that I was actually scared by what I would find. Sure, the corridors were a bit grim, but my room was fine (apart from the lights that didn't work), bigger than any I've stayed in to date.

By the Tuesday night, there was still no sign of any of my new colleagues and my flat hunting was not bearing fruit, so I was pretty tempted by the cottage I found on the internet on the west coast of Ireland. All changed on the Wednesday, however; I discovered I had a room mate, and he had contacts. So I was taken to lunch and he and I chattered our way through our work. That night, I went out with a bunch of people I met on the internet to see a movie I wouldn't normally see - the Wrestler. I'm pretty sure the last time I saw Mickey Rourke was in Barfly, which came out in 1987, so it is little wonder I didn't recognise him. The whole notion of a wrestling movie does nothing for me (and it was fake wrestling at that) but I do think he did a tremendous job of acting, and liked the side stories involving Cassidy and his daughter, and got the sheer sadness of a fellow who knew nothing but wrestling.

Reading this week was Aldous Huxley's Antic Hay, set in 1920's London. Insofar as there is a story line, it is about Theodore Gumbril's efforts to get his "pneumatic pants" manufactured - they have cushions you can blow up to make the tasks of kneeling and sitting in church more amenable - and to get himself a woman.

Posted by NZBarry 15:40 Archived in England