There was a bit of a groundswell of chatter - in blogs, on newspaper travel pages, and on TV - about Tbilisi, the capital of Georgia, which inspired this trip. The plan had been to spend about a week here: ultimately, it is closer to two. I finally arrive by train from Borjomi at around 9 in the evening. Planning ahead, I have a room booked in the hotel in the railway station - there's not much to say about it but it is convenient. Surprisingly there is nothing to eat in the station: its laughable foodcourt is closed and the various food places outside don't look very interesting. Eventually I find a combination Indian sweet shop/Turkish restaurant where I get some lovely lamb chops cooked on the charcoal grill - they also give me a curried soup and tea.

Tbilisi is strung out along a valley, on both sides of the Kura River - I visit pretty much all of its extremities. Here is what it looks like from the west. 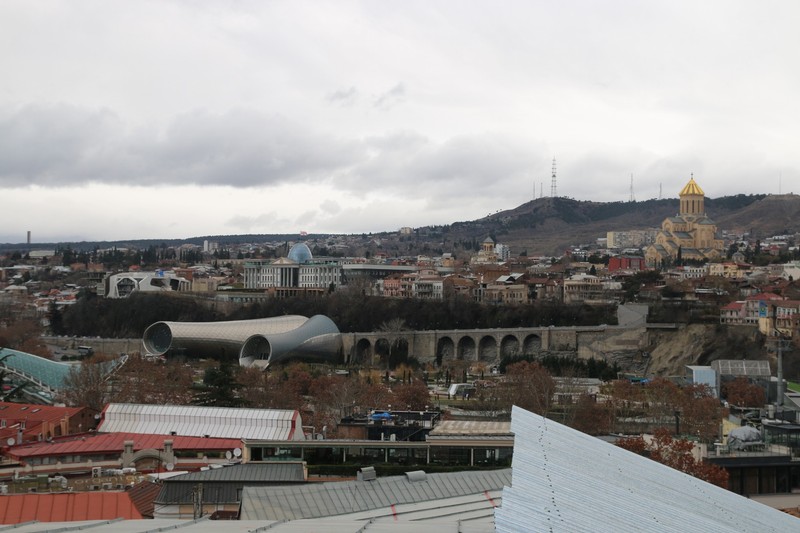 For the first few days, through until New Year's, I stay on the left bank - the eastern side - in a hostel that gets talked about a lot: Fabrika. It is in an old sewing factory - I take a room by myself: it is very plain (and the corridors are very long) but the hostel is a great place to stay, although you might not think so when seeing it from the outside. 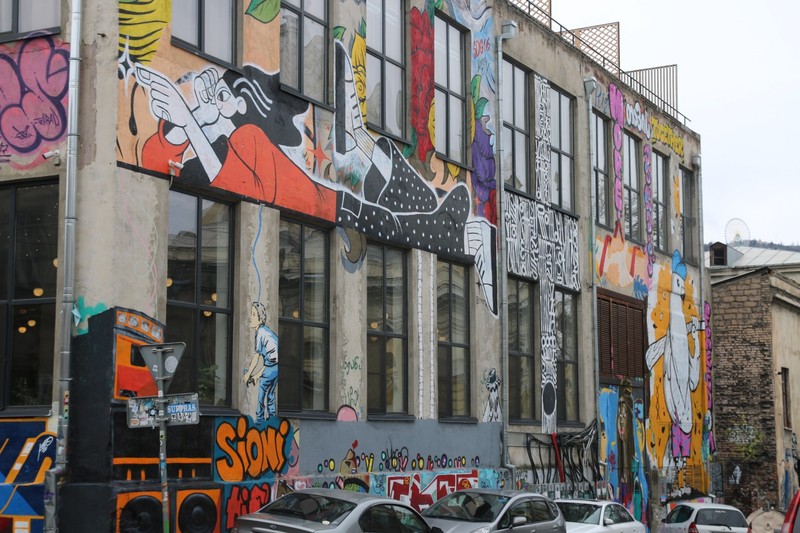 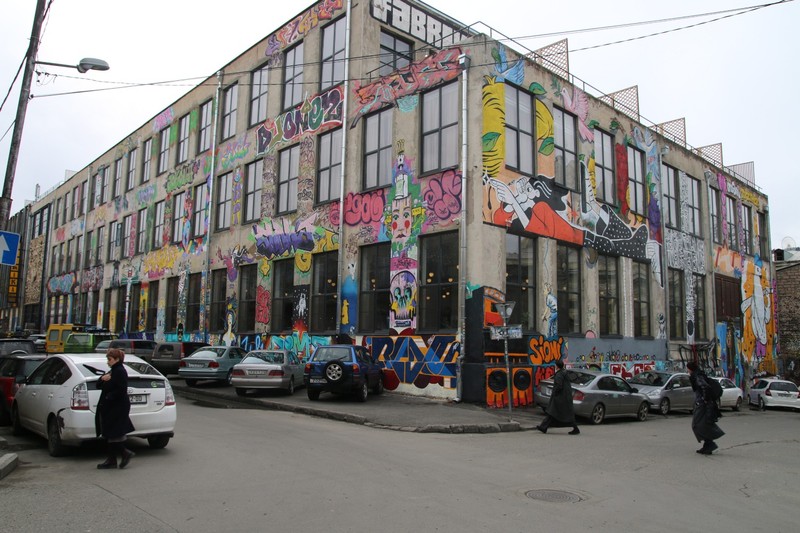 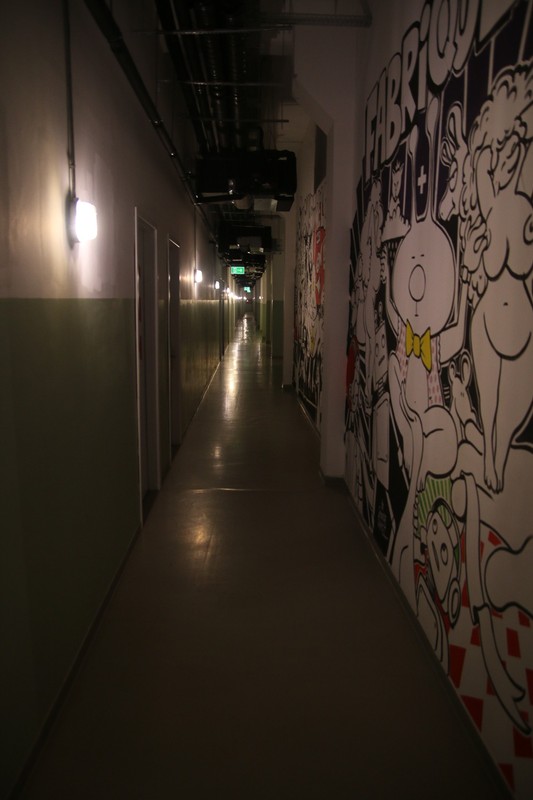 But you go in and find they have an amazing lobby - seating of all sorts, a huge line of books piled up along one wall, a bar with good coffee and, at the end, a restaurant - somehow I neglect to go here apart from having lunch when I first arrive. On my last day, to help people recover from New Year's Eve, there's a DJ - one song in particular gets to me. It is a woman singing, not in English, maybe in Georgian - her voice is full and rich, and set against the background of some orchestral music. 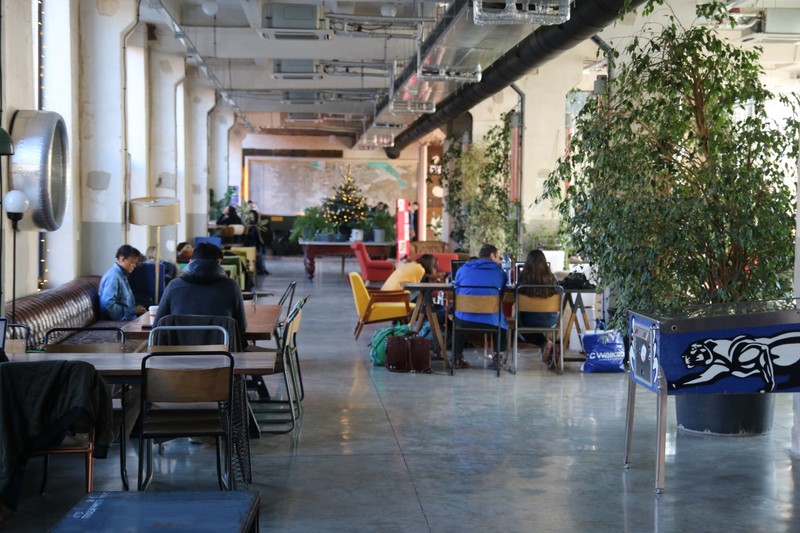 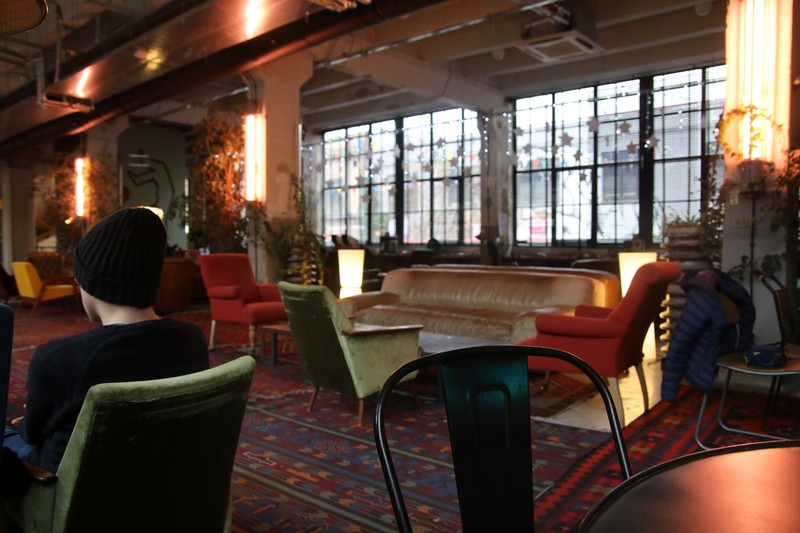 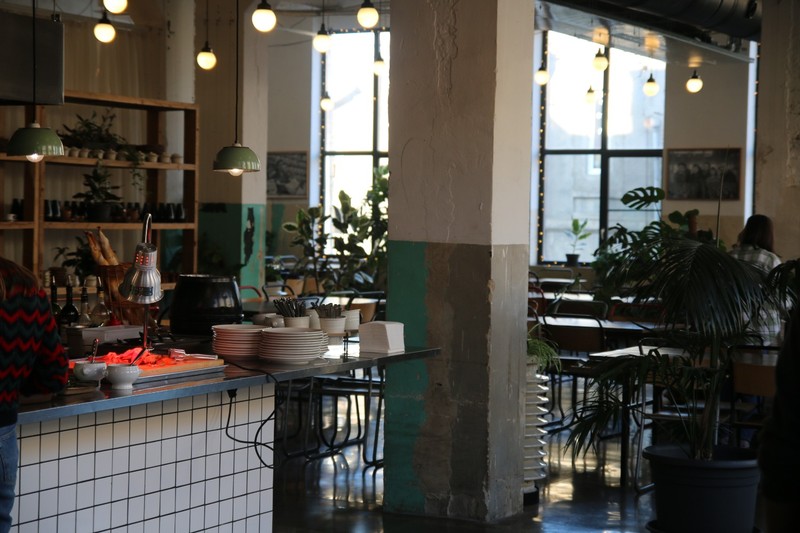 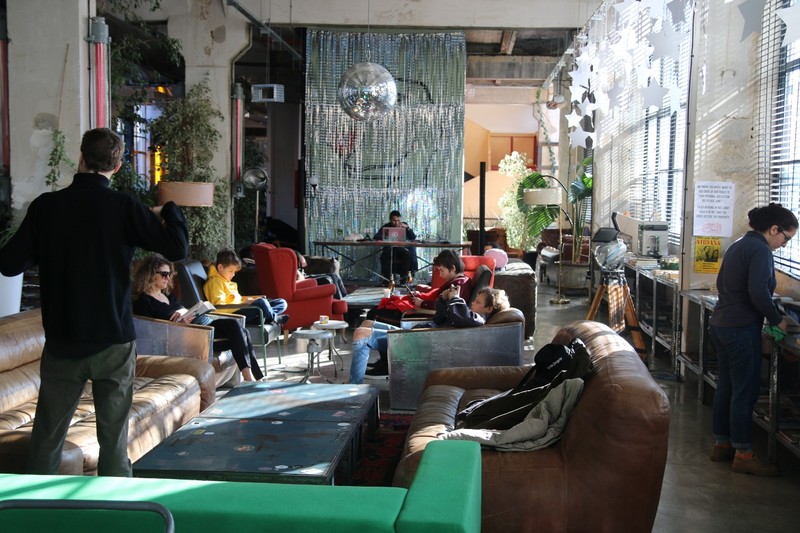 Out the back, there's a courtyard in which there are various related businesses - a record shop, a couple of fancy clothes shops and a line of cafes and bars - I have ojakhuri (the pork and potato dish I've now had several times) which is given a modern spin here, by adding pomegranate seeds and a couple of other unusual elements. It's good, and washed down with some lovely black craft beer. 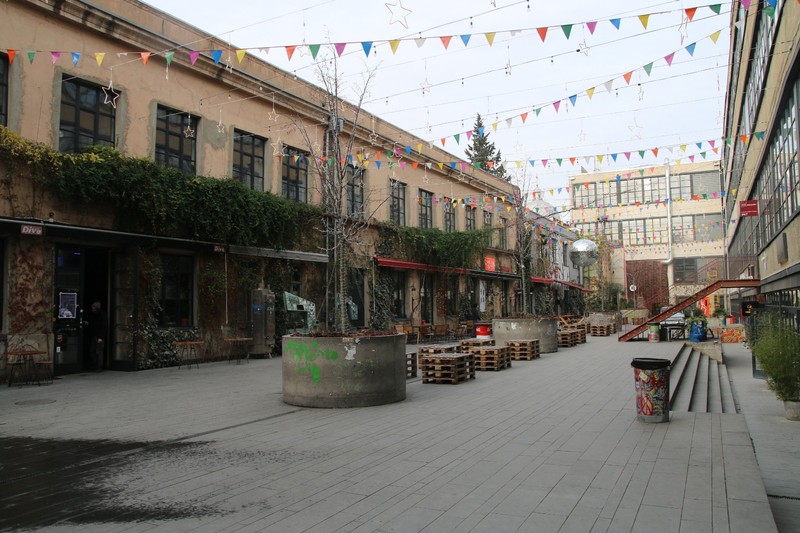 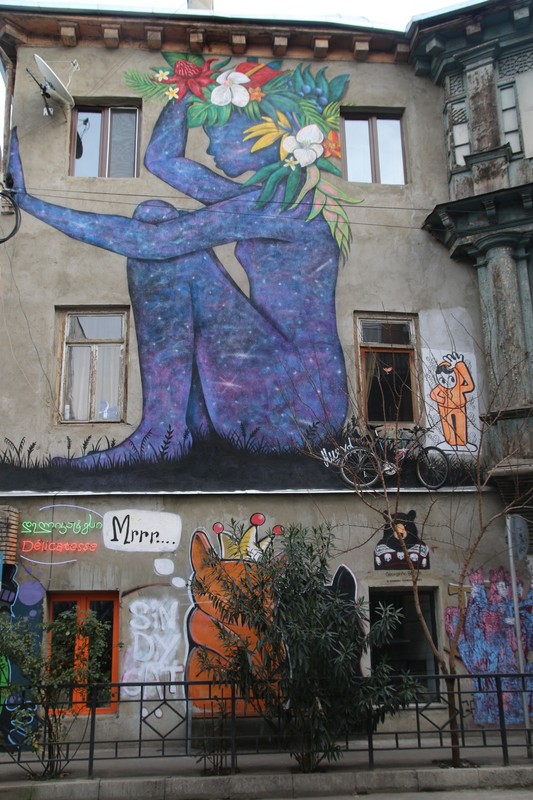 Although it isn't actually Christmas here for a couple of weeks, they're ready for it - across the river there's quite a large Christmas market fenced off. Very little is happening when I first see it, too early in the day, but at night the place is packed, with several bands going full bore, lots of lights - my camera didn't really like being asked to take photos but one does give some idea. 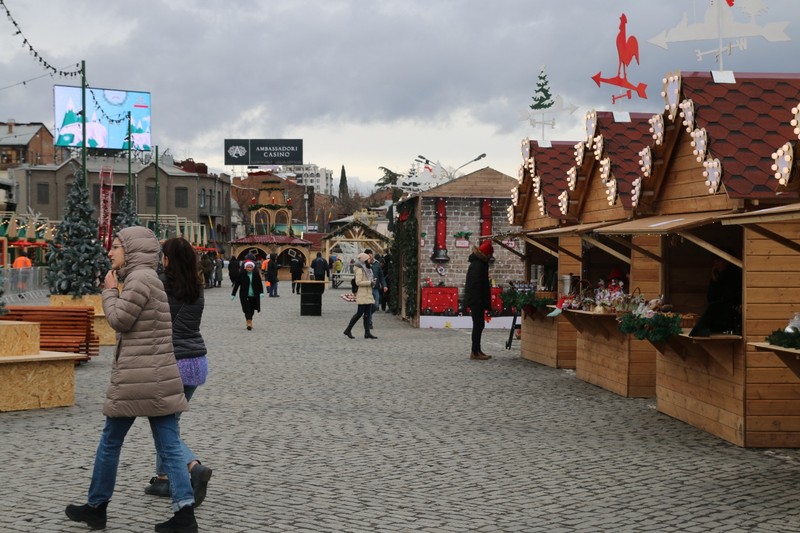 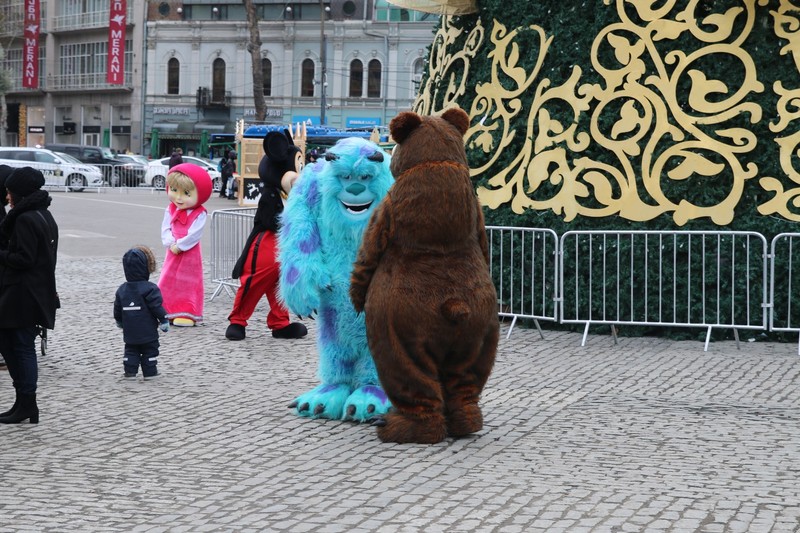 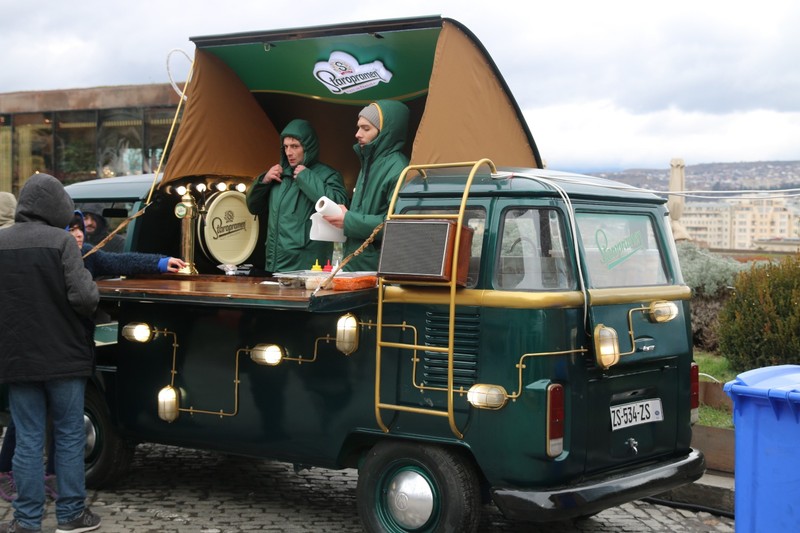 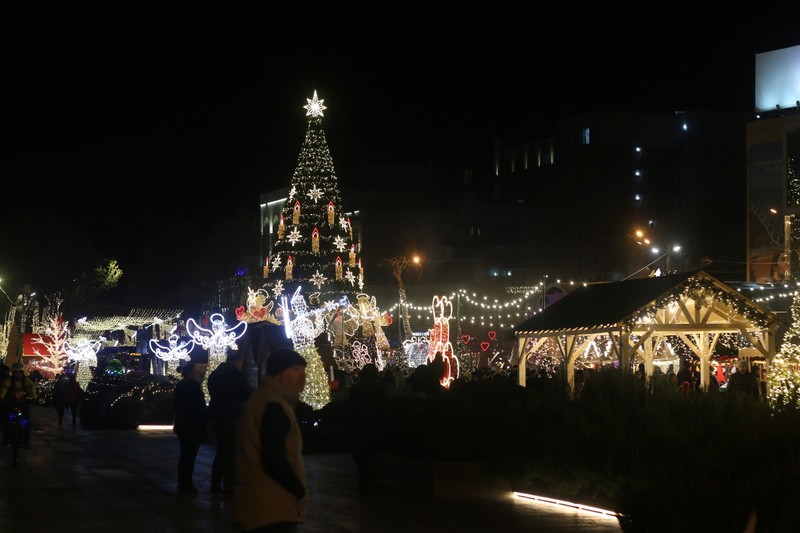 Nearby there's a Biltmore Hotel - a bit pricier and posher than my normal haunts, and I have to say they made me feel it as well, but I persist and have a good G&T in their bar - its the sort of place that women walk around wearing full length fur coats, and I'm there in my fisherman's jersey and Swanndri raincoat. 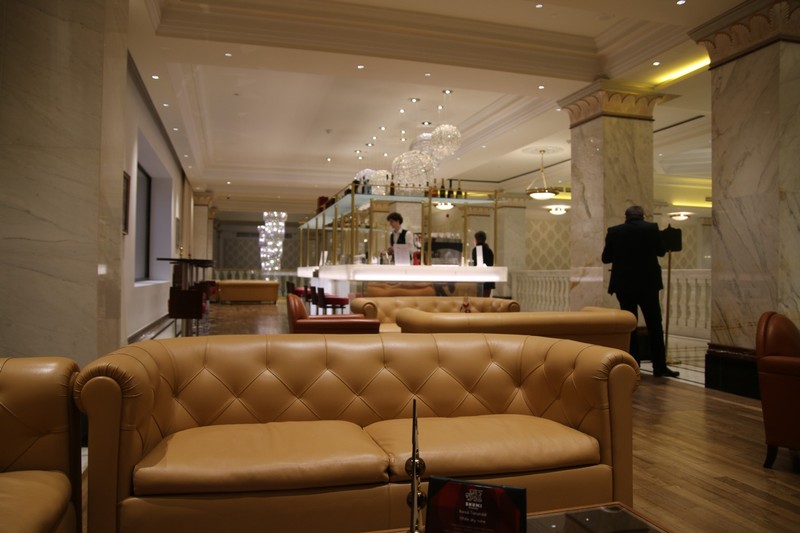 Most of my days involve just wandering in a particular direction and seeing what I see, but I did leave home with some things I wanted to see. Top of the list was Prospero's Books & Caliban's Coffeehouse: the bookshop is nice enough although much smaller than expected, but the coffee shop is terrible - just a few chairs, bad coffee and a badly prepared cheese toastie. 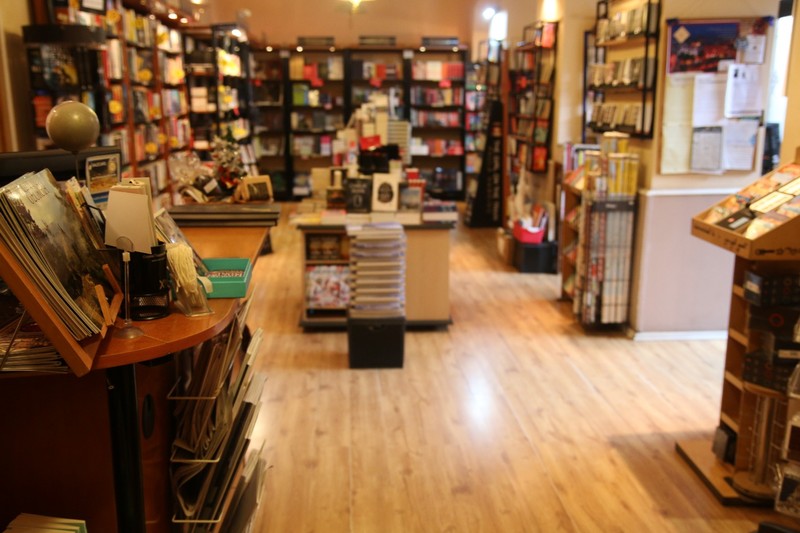 I have a much better time at Schuchmann Wine Bar: you go in a narrow door and down some steep steps into an underground bunker. There is just one couple there, apart from the staff: they're from Scotland but living in Saudi Arabia. We have quite a good chat, with the waitress joining in as well, until the conversation takes a racist turn when I mention that I have seen more Indian travellers than anyone else. Luckily, they leave soon after. 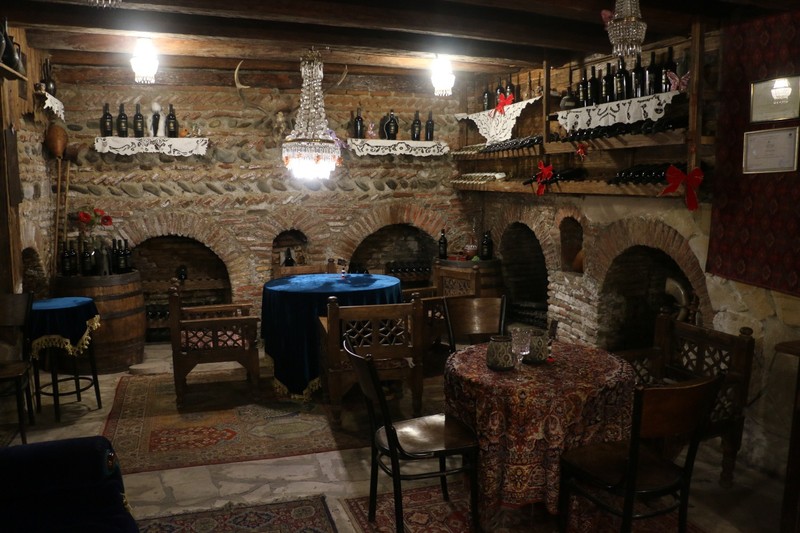 I did pick up a tip from them about dinner: they and the waitress talked about a dish called shkmeruli and told me where to find it - a restaurant full of Georgian workmen when I arrive. The explanation I was given is that shkmeruli is chicken marinated in milk and garlic overnight, there may or may not be boiling, but the chicken is then roasted and served in a milk and garlic sauce with the local flatbread. It looks like this 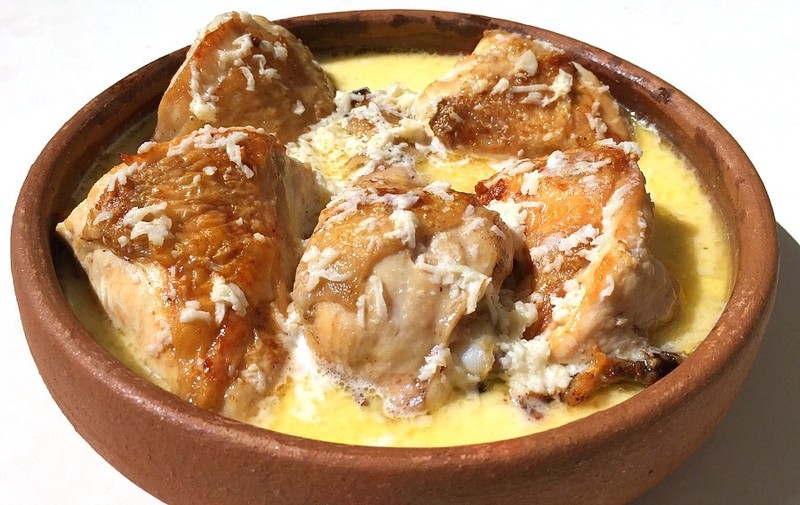 Mine doesn't look quite so appetising, and the chicken is overcooked so is quite dry - but it tastes good and there is plenty of it. Of course, I pig out on kharcho first, so it is quite a mission to get through all the chicken, one I fail to complete by about one piece of chicken. 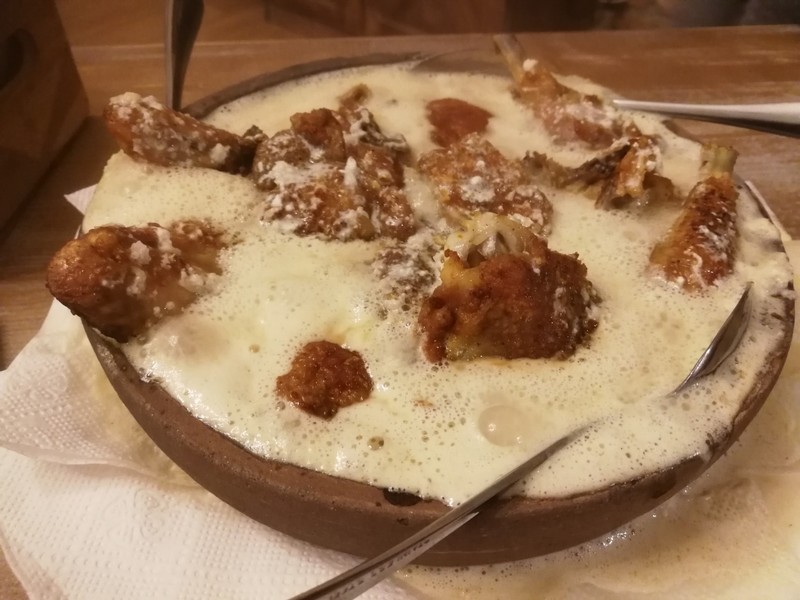 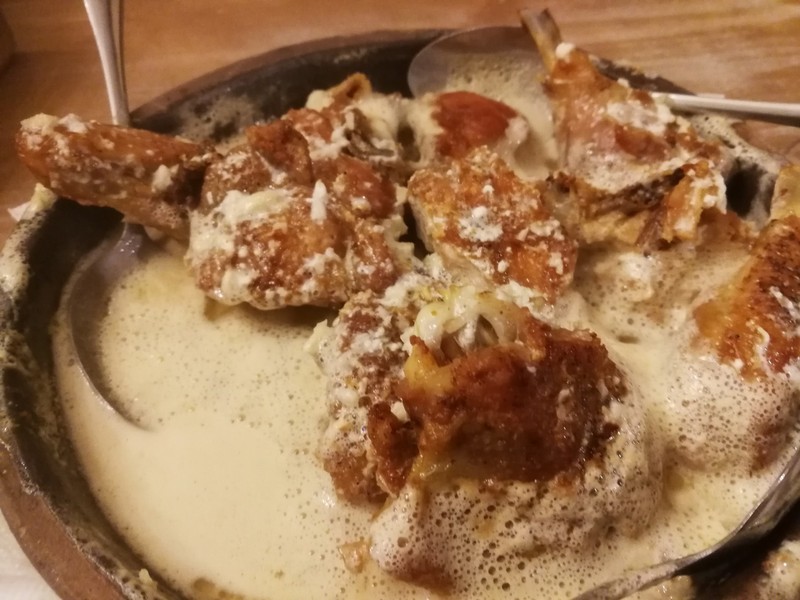 At the north end, 16 km from the centre, is the Tbilisi Mall - going there is a big mistake. It is completely packed and I lose all sense of direction: I basically have something to eat and feel I must leave, because I hate being in it so much. I have made a rookie's mistake and failed to work out where to catch transport back to the city, not even the map on my phone works. I do know, however, which way I must go, and walk a couple of kilometres. This gets a bit more adventurous than planned, because the road has no footpath, and the only safe option is to climb the bank and walk through the forest, in pitch black darkness. Eventually I find a bus stop, with about an hour to wait for the next bus - it is a chilly night, made worse by me being stopped outside a nice, warm University building with a drinks machine and security to stop me getting at it.

Posted by NZBarry 02:57 Archived in Georgia