For the very last of my pre-booked Travelodges, I had a three hotel extravaganza sorted out for London, in their City Road, Marylebone and Covent Garden hotels. I was feeling extra pleased with myself, because somewhere in Eastern Europe, I’d clicked on to the Megabus site and found free bus tickets from Birmingham to London and back. That’s right, FREE! Yes, there was a 50p booking fee, but still I was very proud of myself for getting free travel to London. Unfortunately, I had an awful feeling on Friday, when I was checking the bus departure time. D’oh! I’d booked for Thursday. So, a quick scan around the internet and I was able to get an early afternoon slow train down for ten quid – not bad.

I hadn’t done much to sort out what to do with myself in London for the weekend, just taken a quick look at Time Out and thought it would be nice to hit one of the major art galleries. So, on the Friday evening I found myself on a bus heading towards Dalston Road, and Stoke Newington – a pretty downtrodden East London suburb in my time there, but it is slowly being colonized by a fashionable young crowd (just my sort of place (not)). I was going because I’d heard there was a gig by a French singer called Francoiz Breut in a café there. Their website had warned me there were no more presales but I hoped for a doorsale – no go. That meant me stuck out in East London without a plan, but I found a very nice Turkish restaurant for dinner, then wandered the streets. I think it was after 11:00 before I caught the bus back, and yet there were at least half a dozen hairdressing shops still hard at work, fruit and vege shops still showing their wares, even flower shops, along with the inevitable kebab shops, chicken shops, taxi shops, pubs, bars, clubs and lots of activity.

I had a few hours to kill after leaving the City Road Travelodge before I could check into the Marylebone one (way across west of the West End), so I decided to walk. I didn’t get 50 yards and I’d already had two diversions! The Caffe Nero opposite was inevitable, but I also wandered into the cemetery, and was a little surprised by the notoriety of three of its inhabitants, and even that they were interred together: first I found John Bunyan 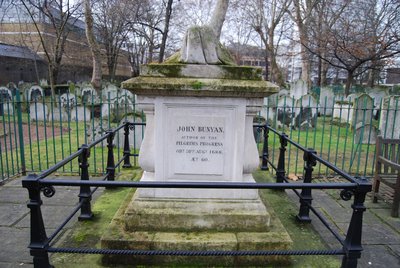 and then, not too far away and head to head, William Blake and Daniel Defoe. 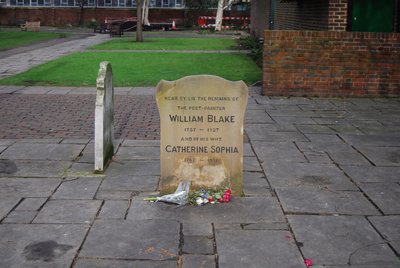 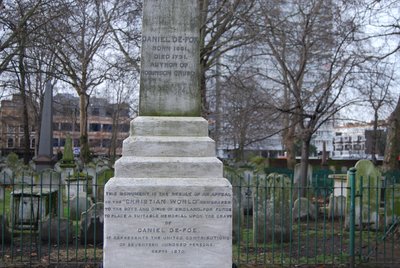 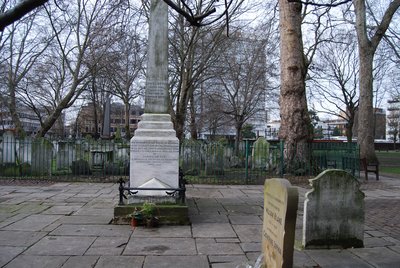 Crossing through to the other end of the cemetery, I noticed a sign for the Barbican, a place which had really impressed me when I lived in London, mainly because I’d never seen a precinct which combined an art centre and apartments (as I recall, they were Council flats back then) nor one which was so comprehensively made of concrete. But before I got there, I came across the Sun café, 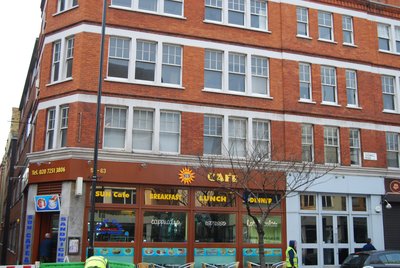 and it looked so cheery I had to go in for an early afternoon breakfast – a full English, with very nice bacon and a big mug of tea (I’ve practically given up on coffee here). The Barbican is looking better than ever: 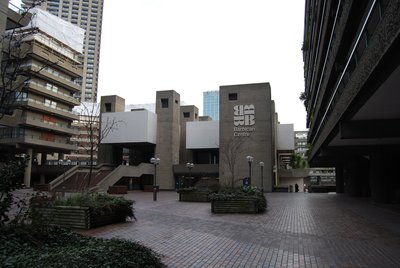 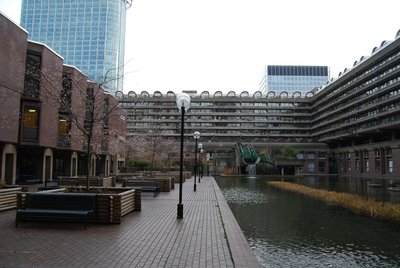 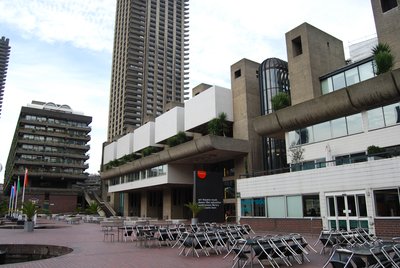 More wandering saw me go back past my old house and in to Bloomsbury and up the Tottenham Court Road to Euston. Somehow, it was nearly dark by the time I finally made it to my hotel; no art gallery for me! The Marylebone Travelodge is the first I have seen that lacks the trademark blonde wood furniture, white tiled bathrooms and near colourless interior – it is still in the old style, but being refurbished. I had a pub that had been strongly recommended to me by CAMRA, but feeling restless, I wandered out Edgeware Road to find some dinner; somehow I wasn’t satisfied by anything I saw until I’d gone the length of Oxford Street and found quite a posh Indian restaurant. I have no idea what the couple at the next table were up to; I couldn’t help but hear the majority of their conversation, and it seemed to be an odd mixture of date and deep psycho-analysis.

Sunday was equally action-packed: I walked back up Oxford Street, stopping this time at all the major shops and having a good look round. I admired the goodwill of the guy behind the bar where I had lunch – a couple of Americans wanted to take a photo of him pulling a pint, and he was kind enough to let them do it themselves.

Covent Garden is, of course, theatre district and I was looking forward to seeing whether I could get a ticket to the RSC’s Midsummer Night’s Dream; their website was a bit vague as to the possibilities. Turned out they don’t do a show on Sundays, so it was off to Foyle’s for an extended wander – so many books I could have bought, but knowing I have to carry everything I buy gives a wonderful incentive to curb my spending. Dinner was very pleasant, in a wee (non-French) bistro opposite my hotel – since it was raining, I didn’t feel too inclined to go for a major wander. The only blight on the weekend was the fact that I left the power chord for my laptop somewhere – I had thought one of the hotels, but they had no trace of it.

Coming back on Monday morning was particularly dreary in my free bus – we got stopped for at least an hour on the motorway, so it was quite late by the time I got to work, and then the first thing I had to do was find a new power adapter for the lappie; luckily I wander around enough that I actually knew just the place to get one, and could get on with my work fairly quickly.

Since the Travelodge deals had run out, and my (rather limited) efforts had not produced somewhere to live (I enjoy living and even working in hotels), I booked into the Best Western at Wolverhampton for the whole week and took up my role as commuter boy, buying a weeklong season ticket. The hotel is a nice enough place, but a fair old walk from the train station.

On the Tuesday, something finally clicked in my head. Last year I spent some time studying Dr Johnson, and knew that he grew up in a place called Lichfield. Every night, I was catching a train into town that had Lichfield as its ultimate destination – so, yeah, after about two weeks of this, it finally occurred to me that this train was going to Dr Johnson’s birthplace, and I went along for the ride to see what it was like. Very nice, as it happens – quite a few Tudor buildings, some grand old pubs, a pleasant feel and a huge, triple-spired cathedral. It was dark by the time I saw it, but it was still obviously a splendid building, and made quite an impact.

I had a wonderful three course dinner for ten quid in the 1709 Bistro (so-called to commemorate Dr Johnson’s three hundred year anniversary, not because the building was that old) – a creamy mushroom crumble, sausages where the menu gave so much detail I felt I knew the cows personally and then a baked Bramley apple, all washed down by one of the nicest wines I’ve had (something from Argentina). Very good.

On Wednesday, two and a half weeks after arrival, I finally met the fellow who had invited me to Birmingham and got taken on a tour of the School, which included a pretty good talk with the fellow whose work had inspired me to come to Birmingham. Tired of the really crappy food on campus and the scruffiness of the nearest suburb (Selly Oak) I thought I’d wander up to Harborne, the suburb above the University, to see what it has to offer, in terms of places to have lunch. Quite a bit – I had a great pint in the Junction Pub, found good coffee, nice cafes, everything I could hope for except a way to get there in less than half an hour. Back in Birmingham central, I decided to try dinner at the Bella Café, an Italian chain restaurant – the service was hugely impressive, the food was to Italian food what McDonalds is to American.

Reading this week: finishing off Aldous Huxley’s Antic Hay and starting on a rather more grand venture – Neal Stephenson’s Quicksilver, one part of his Baroque Trilogy. The timing is right for me to read this; after studying the 16th century last year, all of the political and religious figures and many of the scientific ones (such as a very young Isaac Newton) who show up in this alternate scientific history are familiar to me.

Posted by NZBarry 12:56 Archived in England