Storm and heavy snow warnings are given for the end of the week in Yorkshire. Where is Barry going for the weekend? North East Yorkshire! Travelling on Black Friday. And to make matters worse, he's going to the beach. Should be nice in the snow. Whitby connects two of the dots of my prior travels - it features strongly in Bram Stoker's Dracula thanks to its 7th century Abbey remains, and is where one Captain James Cook did his apprenticeship and had all of his ships, including Endeavour built. Neither of these feature particularly strongly in my reason for going to Whitby, nor does the fact that it is an ancient port town. No, Whitby has been in my consciousness since the mid 1990's, when I was fairly heavily involved in usenet and used to hang out, virtually speaking, with an Australian based group of Goths. They used to rave about the twice annual pilgrimmage to Whitby.

Funnily enough, there has recently been a programme on TV over here, Britain's Best Drives, in which Richard Wilson (known to some as Victor Meldrew in One Foot in the Grave) goes for what were claimed to be the best drives in the 1950's, complete with a 1950 motor. His first drive was in a Morris Minor Traveller, from Scarborough to Whitby, where he picks up four Goths to give him a tour of the town; he reports that 10,000 Goths come every April and September.

My weekend started early; since I had to catch a train from New Street to York at 8:30 in the morning, I decided to stay the night before in town, rather than run the risk of missing the train in from Lichfield. Even so, I just made it. The rail website made Whitby out to be extremely time consuming and/or expensive to get to by train from York (even though it is only about 40 miles) so I went on by train to Scarborough, England's first seaside resort, down the coast from Whitby. I liked the look of this place, walking down to the beach, I found several interesting looking places to eat, coffee shops, nooks and crannies to explore and the beach itself was pretty special: 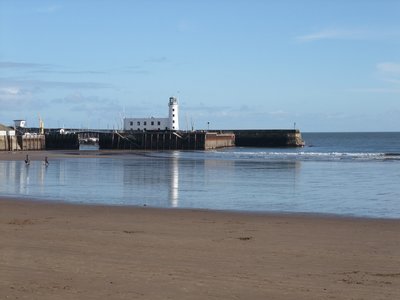 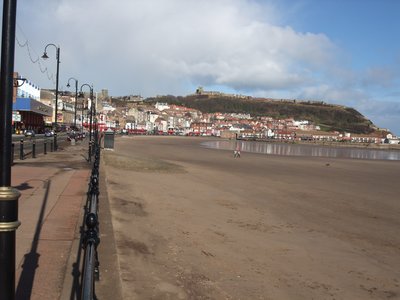 (Notice the compete absence of any wintry signs.) Sitting up above it all, is the Brittannia Grand Hotel, advertising rooms for a mere 25 pound (I checked out what it might cost to stay here for a week in May - for full bed, breakfast, dinner and "live entertainment", a mere 273 pound (less, oddly enough, than B&B alone)). 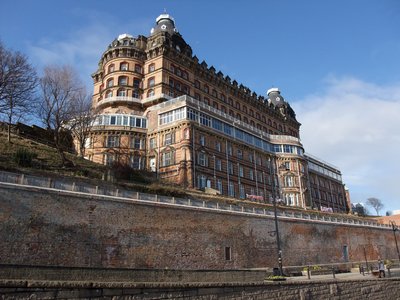 From Scarborough, I caught the bus up through the corner of the Yorkshire Dales to Whitby, a trip taking about an hour, through tiny wee towns of stone-built buildings, a few wooded areas and, of course, dales. First sights of Whitby were extremely promising: 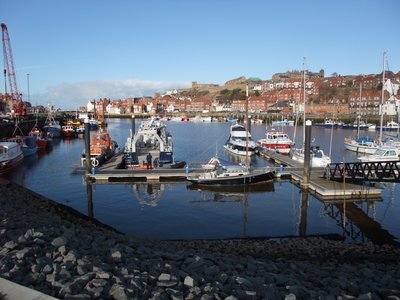 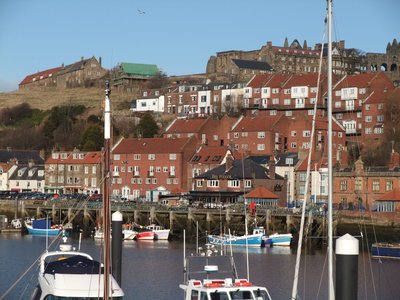 To get to where I was staying, I had to cross a wee bridge over the harbour entrance, walk through the old town, and then ascend the famous 199 steps. They afforded some nice views back over the town 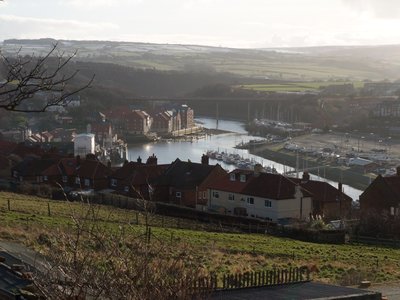 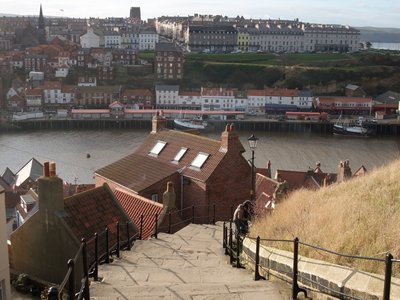 My YHA hostel was unbelievable (although a bit hard to find, as it formed part of the National Trust Abbey grounds): 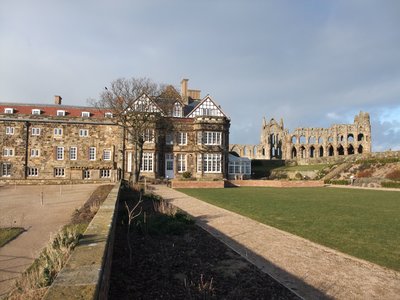 No, not the building out the back, that's the ruins of the Abbey, the front building, with its formal gardens and gracious looks is a Youth Hostel, offering bed and breakfast for less than 20 quid. I think I have a new favourite. I didn't even have anyone sharing the room with me (although around midnight, there was a group of very loud and very drunk Ramblers downstairs making their presence felt). I would have gladly stayed here the whole weekend but, sadly, I could only get one night when I booked.

I went back down into town for a good wander around and actually managed to find a decent cafe. I also found a place doing holiday lets in Whitby, and found I could rent a cottage for just over two hundred pound the week. 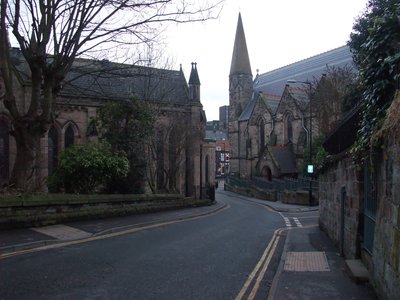 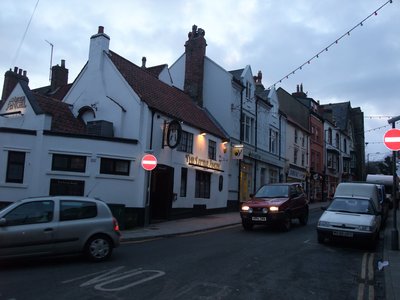 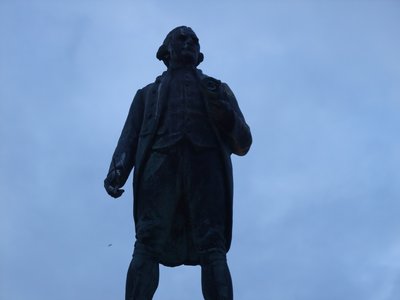 That last is Captain Cook, looking out to sea. Whitby is reputed to have the best fish and chips in the country, at a place called Magpies. So I was more than a little surprised to find another place flaunting signs that it was the regional winner for best fish and chips - since it was considerably cheaper than Magpies, I went there and was very happy. In the morning, I went through the Abbey House museum (a disappointment, as it only contained a few, very nicely presented, fragments from the Abbey itself in an effort to tell some of the archeological history. But then I could go out and explore the Abbey: 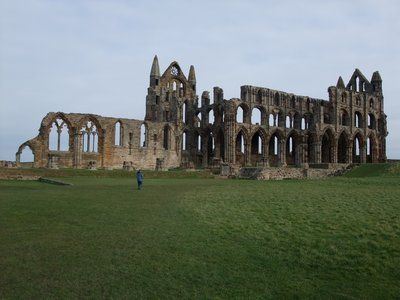 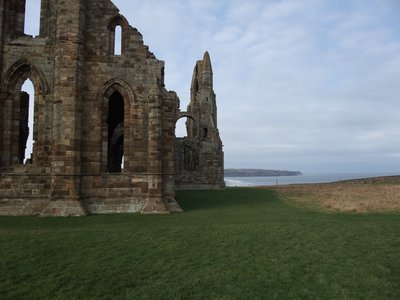 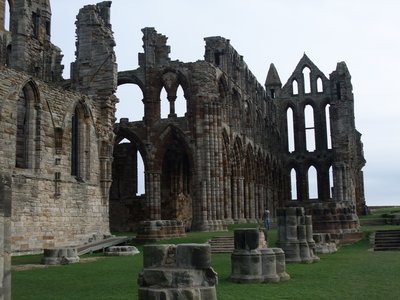 It has had a long history - built in the 7th century, rebuilt in the 13th, sacked by Henry VIII in his pogroms, shelled by the German Navy in World War One and now a tourist attraction, largely thanks to its Dracula connections. Nearby is St Mary's Church: 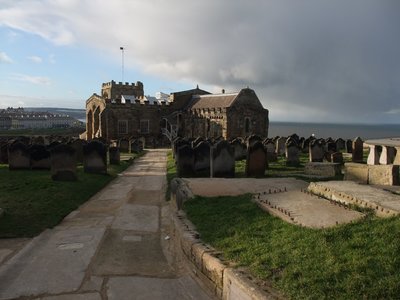 Since I hadn't really known what to expect, I hadn't made any effort to find more accomodation in Whitby, and had actually sorted out a place to stay back in York. I happened to wander in to the train station to see what it would cost to go to York and it turned out not bad, so off I went, up to Middlesburgh (a Teeside industrial city) and then back down through Thirsk (Heriot country) - with some very pleasant looking villages on the way. My first night in York was in a very traditional pub 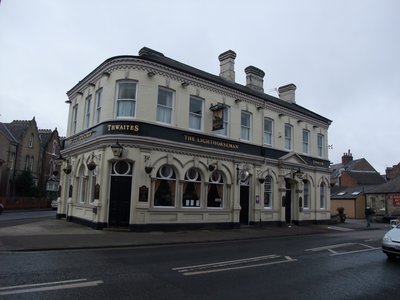 Now, York is famous for things like its castle and its Minster 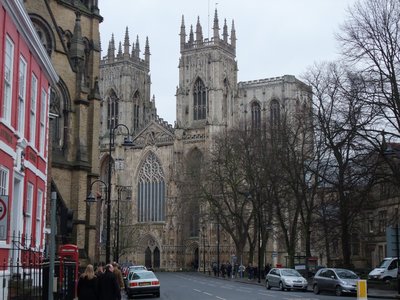 but this is as close as I got. My particular interest was the National Rail Museum, where I spent most of Sunday geeking out over all the trains and reading rail magazines. You can blame this museum for me not having any better photos of York; I tried out the movie feature on my camera (didn't have that on the Nikon) as they turned this huge train on a turntable and by the time it was done, my battery was flat. I do have LOTS of photos of trains! 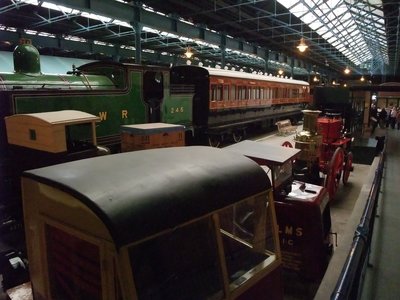 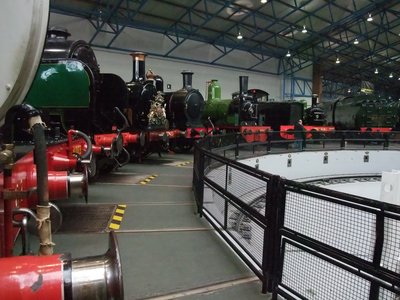 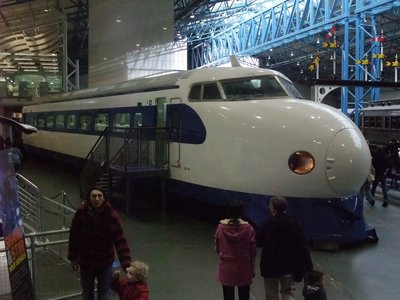 In some ways, the most fascinating part of the collection was what they called the Warehouse, which was a room piled up with 2 million peices of rail memorabilia, a hoarder's dream! 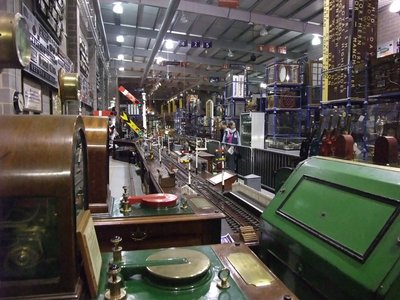 One other thing I really liked about York was Bettys (they've lost the apostrophe since they started, in 1919), a cafe which first opened in Harrogate and then spread out to York in the 1930's. It was VERY traditional, where I could go and enjoy a proper pot of tea and a tea cake (which I did) or have a traditional English pie meal (which I did not, as they had run out) or traditional Swiss food (it was actually started by a Swiss baker). When I first saw it, there was a huge queue, but I went off wandering around bookshops and coffee places and by the time I came back, I had no trouble getting in for dinner.

One thing I did not like was York Public Library - it is the first one I have come to which seems to be against people with laptops - I was welcome to take mine in "but we can't let you plug it in". Well, even if they could have let me, there were no plugs. What it did have was a fairly large room of getting on for elderly gentlement, doing various sorts of research, all of whom seemed to be particularly noisy - either they had every single object wrapped up in obnoxiously noisy plastic, or they had the sniffles, or books they liked to thump, or people they had to talk to. I had work to do (my train back to Birmingham was an eveing one, so I had Monday in York), so I beat a retreat back to the National Railway Museuem, where they have a perfectly quiet library (sorry, "Search Engine") with power points and internet access, and a good cafe downstairs.

Posted by NZBarry 10:53 Archived in England