The flight over was pretty standard; people rave about Singapore Airlines but they didn’t seem that special to me. Formalities at Changi were dealt with very swiftly and I was on the MRT and up in Little India before I knew it. My hostel 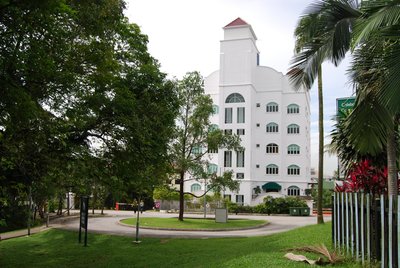 is on top of Mt Emily; although it is only a very little mountain, in the heat and with my travelling library, I nearly died. Such a sight must be common at checkin here, as they didn't even blink at the appearance of a near-dead fellow. It is a very good hostel, and my room mates have been most congenial.

Since I have been here twice and will be here for quite a while, I didn't rush out and see stuff. Besides, there is very little here I actually want to see; the Duck Tour, Sentosa Island and Jurong Bird Park don't really do it for me. The National Museum was closed for refurbishment last time I was here, so it is on the list and while wandering around, I have come across the Art Museum, which looks good.

Maybe my mission can be to find my favourite food court. I have been a little disturbed to find that two of the places I enjoyed the most (Bugis and Raffles) have been completely refurbished, and not in a good way; they've gone upmarket and with branded shops, rather than a sequence of hawker stalls with a cook or two at each producing their own speciality. Ah well, Foodland is still the same - as soon as I recovered from my arrival, I popped in and had a big Tiger and Char Siew Pork.

Bright and early, at lunch time on Monday, I turned up for work. First, I had to go through a rather quaint little ceremony to get my library card; I gave the staff $40 cash, they wrote out a cheque for $40 to NUS, in a NUS chequebook, and posted it off to the NUS central administration. My card will turn up "soon". I'm not sure I needed to bother - the library staff seemed quite OK with giving me entry anyway, and were very nice about giving me a tour. I was heartened to see they do have a New Zealand collection, but it was the very last thing we came across in the tour. The campus is rather pleasant, with two quadrangles: 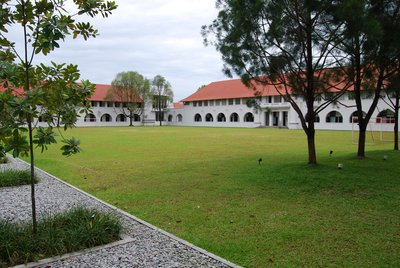 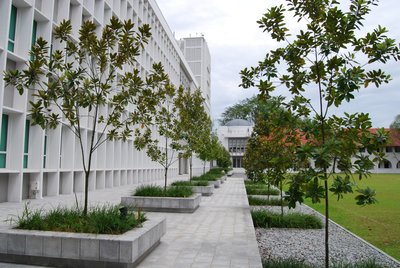 This caught me out for the first couple of days. There is a student lounge in the lower one, and I thought "hmmm. very small campus, so that's probably the only place to eat". It had been hijacked by some Executive Management course, and so I went without. On the Tuesday, I grew so hungry, I popped across the the Shell station, and had pot noodles on their foodcourt - not exactly the world class academic image I've been trying to create. But I grew curious, and so wandered around campus and found not only a coffee shop, but also a big cafeteria with its own foodcourt. I won't put it on my list of favourites, but I'm so glad it is there.

Since I had only booked the hostel through to the Thursday, and pricing in Singapore is fairly high, I've decided to try my luck in Malaysia. I always had my first weekend away booked to be in Melaka, but I'm going to check it out, to see if I can stay there and do my work there for a while.

Posted by NZBarry 05:26 Archived in Singapore