I got back from York late on the Monday night; Tuesday afternoon I was off again. This was just an overnighter, down to Stratford-upon Avon. Some may know this as being the birthplace of a fellow who wrote the occasional play, and that is indeed why I went down. There was a performance of The Tempest put on by the RSC and I thought that since I missed out so badly with my trip to London, I owed it to myself to pop down – it is just an hour or so south of Birmingham. After finding my way to the YHA 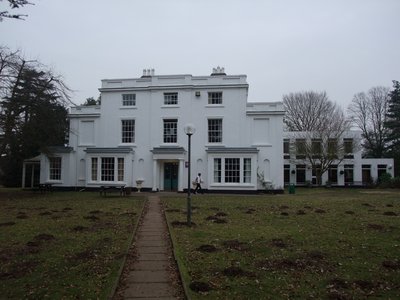 (a 40 minute walk out of town, longer when you start to doubt that you’re heading the right way) and back into town, there was no time to spare – just a quick cake and it was time for the show.

And what a show it was, one that had people behind me expressing dismay because it didn’t exactly conform to tradition. Since I don’t think I’ve ever seen The Tempest and had only the barest idea of what it explored, I had no such problem – I thought it was fabulous. 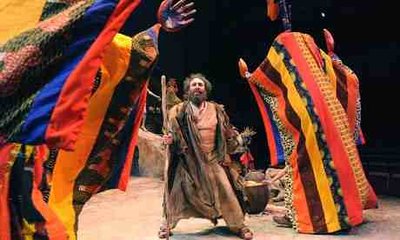 It was a co-production with the Baxter Theatre from South Africa. Instead of a storm, the play started with a puppet sea serpent, slithering its way around the stage (it made me think of those sand-monsters in Dune). Then, later on in the play, to show the men being buffeted and when their minds get disordered, this was done by having dancers carry highly colourful puppets on sticks to stand in for the elements. So, it was a performance with lots of dance, with the dancers dressed in what I imagine to be South African attire, and lots of music and quite a bit to laugh at. Much of the action took place in a tree built at the back of the stage – Ariel in particular spent a lot of time in it, and amazed with his agility. The key characters – Prospero, Caliban and Ariel were superb – and when Caliban finally ousts Prospero from the island, it had a special resonance knowing that Caliban was played by a black South African.

After the show, I got a little confused. I saw this nice looking restaurant with several people still dining so decided to go in; I had already been given a plate of prawn crackers before I realised I had wandered into a different, and very empty, Indian restaurant which served me a very average curry (nice beer, however). In the morning, wandering through town I am sure I ran into the actors who had played Caliban and Ariel, just going for a walk like ordinary people. Instead of heading straight for the train station, I thought I might as well go look for Shakespeare’s birthplace: 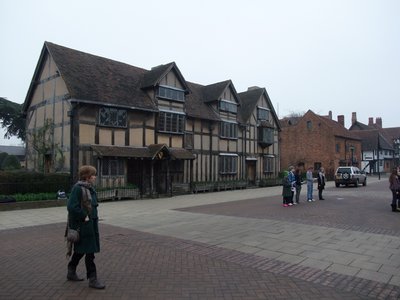 I liked the library and all: 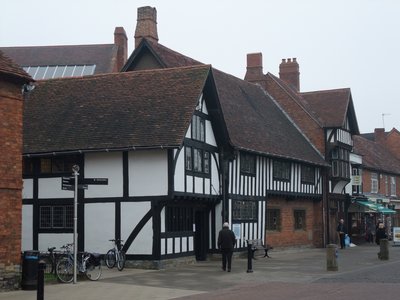 Wednesday and Thursday passed without major event, unless you count going for a couple of pints with some of my temporary colleagues after work a major event. By Friday, I was ready for another adventure, and this time I had my own wheels – I rented a car for the weekend. I had been a little worried, because I haven’t quite got the way that central Birmingham fits together straight in my head, and here I was about to drive out of central Birmingham. Sure enough, I got lost, at least in terms of following the directions I had carefully written down, but I soon started to recognise landmarks and found my way out of town. First stop was as soon as I hit the motorway – there was a service area and, as with every road trip, it was important to stock up with junk food. 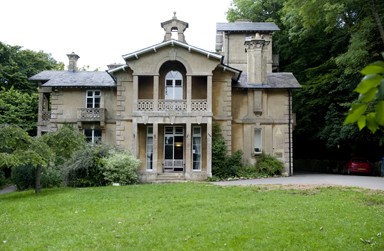 Bath is very posh, so I decided to go with the flow and eat somewhere nice. I soon found myself in a quandary – the 4th best Indian restaurant in the entire UK or a Michelin starred bistro? I went with the latter, and had a marvellous meal – the entree was scallops with wonderfully tasty and tender strips of leek, then sea bass. Wandering the town afterwards, I found a pub called Flan O’Brien’s – I had to go in with a name like that, even if they had spelt it wrong.

Saturday involved a fairly high degree of geekery – the whole reason for this particular trip was the Sound and Vision show on in Bristol; I went and drooled over five hotel floors worth of hi fi and home cinema equipment, which made me want badly to set up a home cinema of my own when I get home. But that was it in terms of Bristol – I had a quick look at town and didn’t think all that much of it, so got in my motor and headed west. All the way to Cardiff (it is only 44 miles, although I did have to go over the Severn River – the new bridge is more than 3 miles long!) I’d booked in there because (a) I couldn’t get into the YHA in Bristol (just as well) and (b) I was curious as to what the River House Lodge was like, as it had just won the Hostelworld award for best hostel in the UK and fourth best in the whole world. While the physical space didn’t really suggest a world beater, the staff was fantastic and the other people staying were pretty cool.

As it happened, I didn’t get to see much of Cardiff. I wandered around on Saturday night, to find some food and a place for a pint, but on Sunday had the itch to go further west. I don’t know why, but I had a particular desire to see Tenby. Although it is only 90 miles (by motorway most of the way) and I left remarkably early, it took me ALL DAY to get there! Of course, with a town called Barry just outside Cardiff, I had to go there. Now, the guide book was not very nice about Barry and said that Penarth was much nicer, so I had to see both. Penarth town seemed OK as I drove through, and down at the beach has a nice pier 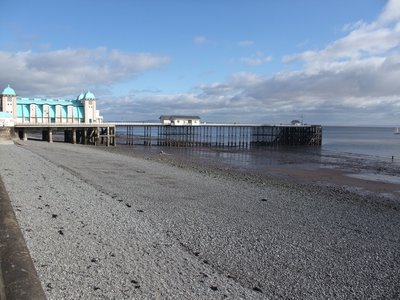 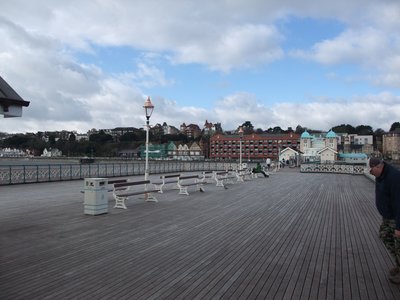 and they made me a big brekfast at a cafe I found there.When I got to Barry, I didn’t like it one bit (apart from the development of the waterfront). Most of the shops on the High Street were shuttered, and it had an unpleasant vibe so I didn’t hang around. I did kind of like this building, sitting all by itself: 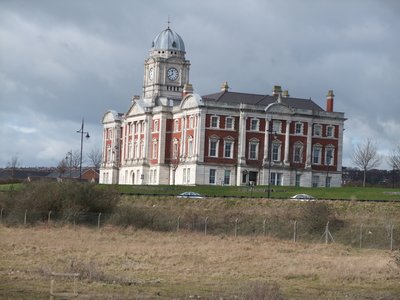 But then I found Cowbridge, and (a) remembered I had actually been here before, when I lived in London and (b) liked it a lot. So I wandered the streets, taking lots of photos and drinking coffee. 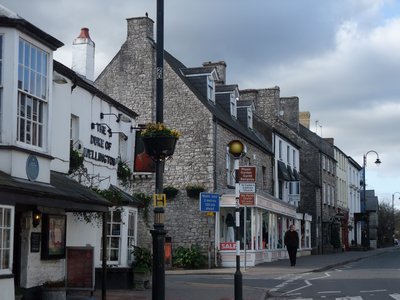 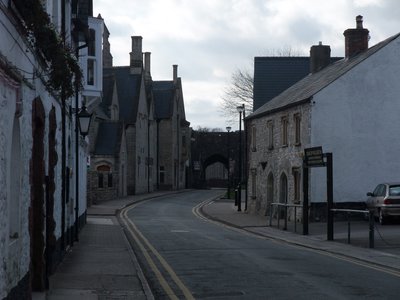 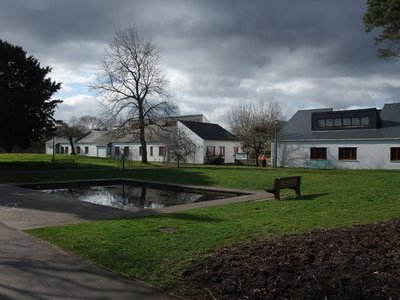 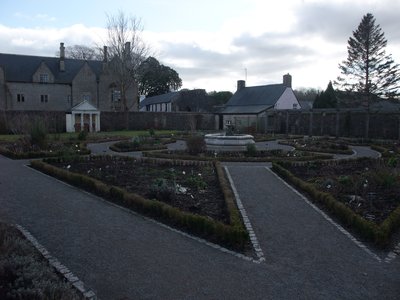 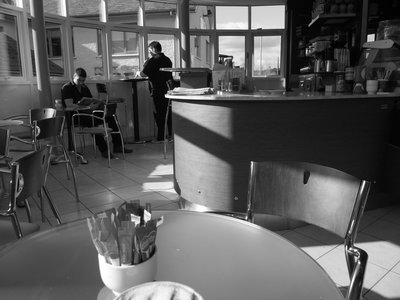 Funny how quite simple things look quite different when they're in black and white. Back in the car, I meandered by as many country lanes as I could to get to Tenby and it was slow going – they were very narrow, with high hedges and little prospect of seeing oncoming traffic, plus lots of little villages to gawk at. So, yeah, it was after 4:00 before I got to Tenby, and it created another dilemma for me, because it seems even nicer than Whitby (where I plan to go for a week when I finish in Birmingham). Here is one of my first views of the water: 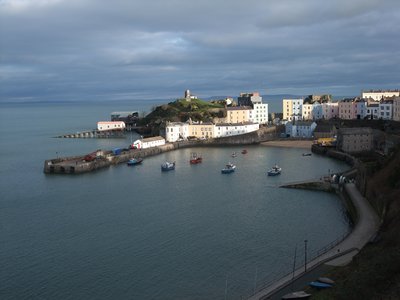 then looking the other way from the same point: 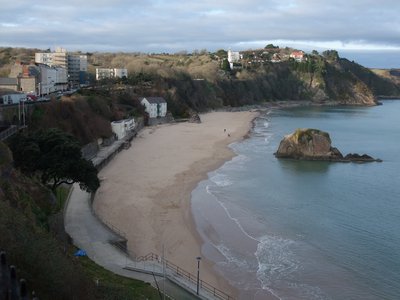 and just back down the street: 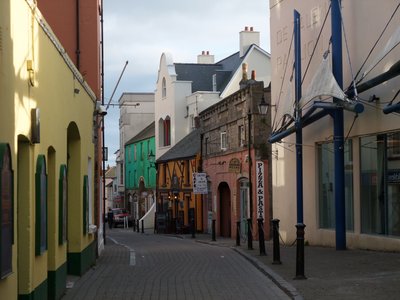 and around the corner 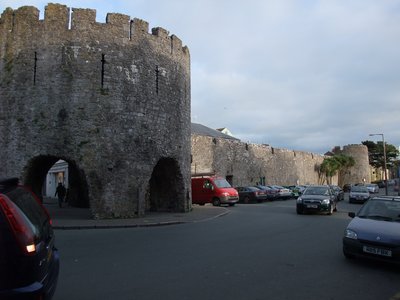 looking out to sea 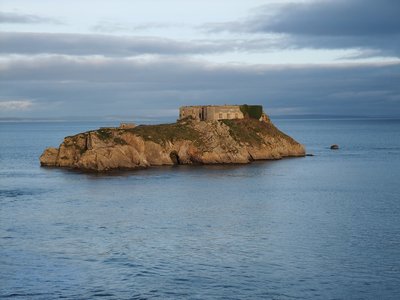 and down at my feet 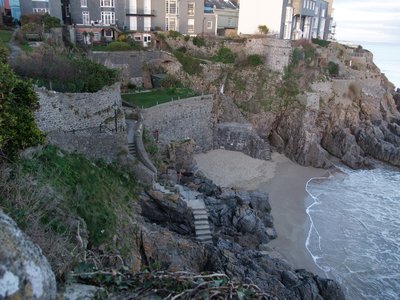 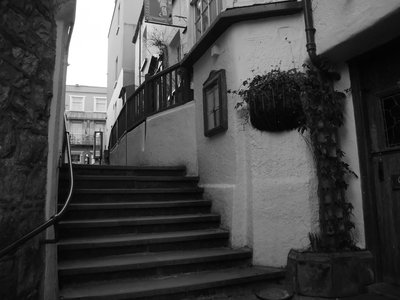 and back where I started 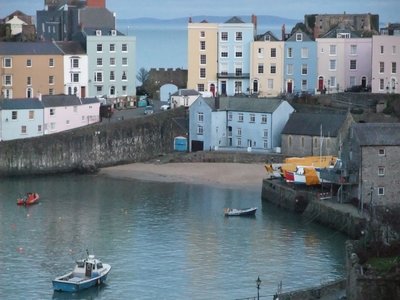 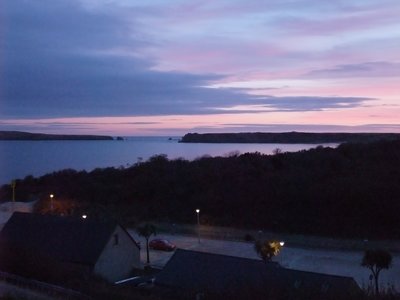 so I had a nice feed of fish and chips, found a policeman to tell me where I might find some petrol, and it was a quick tramp back up the motorway to Cardiff, then in the morning an early start let me take the scenic route home, up through Hereford, and I was back at work before I knew it.

Reading this week was a book I picked up in Whitby, by my second-favourite travel writer, Josie Dew. She cycles and writes very engagingly of her travels – I’ve read both the books she wrote for her trips around Japan and am pretty sure I read an account of some cycling she did in the UK (but not of her trip to Eastern Europe). Last I heard of her, she was coming to New Zealand so when I saw a recent book by her, I picked it up to see what happened to that trip. Turns out she met a bloke and that changed her plans: she spent a couple of years cycling around the coast of the UK (but that somehow didn’t mean she went to Northern Ireland, and did go to the Channel Islands and the Isle of Wight).

Posted by NZBarry 09:37 Archived in Wales

What absolutely beautiful places you have been. It makes me even more excited to visit Europe. What is your next adventure and when?

Thanks - lets hope your trip to Germany is equally enjoyable. Wait and see what adventures unfold here!