Saw a fairly odd movie with my film group, SMS Sugar Man, set in Johannesburg. The entire action takes place over Christmas eve – if you know that “sugar” is the term used for a prostitute in this part of the world, you’ll know a lot about the movie. Basically, the sugars are a bit disillusioned with their lot and want to quit the game. The storyline gets immensely tangled, with hits being arranged, one sugar man being set against another, two of the sugars deciding they love each other... The thing that makes this movie different is that it is the first movie released that was shot entirely on mobile phones. There were only four of us from the film group there, yet we managed to cover all bases in terms of reaction. One fellow declared it to be the worst movie he’d ever seen, which caused another member to leave because she really liked it. I thought it was trying to be too many things at once – shooting a movie on cellphone would suit one with lots of action and short takes, and it had some but also tried for high art and at times seemed to have scenes that were just for the titillation of the director.

On the Wednesday, stayed in town at the newly opened Hatter’s Hostel (voted by Hostelworld to be the best chain of hostels in the UK) but this one wasn’t up to much, too new basically. Did have an interesting encounter with my two young Spaniard room mates – they insisted on us posing for a bunch of photos (and some will know how much I hate that). The reason I’d been in town was to see Emmy the Great, at the Glee Club, which had the most noxious set of rules I’ve ever heard, including making people wait for a break in performances if they needed a toilet, and threatening all sorts of dire things to people with cameras. All of the bands made a point of mocking these. The first two bands were OK, but I was very impressed by Emmy the Great. She struck me as a folk singer, but had odd intonations and pacing of her singing – turns out she’d flirted with the anti-folk movement. But what got me was the songwriting – my only complaint is that there were too many songs to take them all in, I needed to listen to each several times but instead had another song to listen to. Easily fixed – I’ll buy the CD when I see it.

Then on Thursday, I did something that might surprise, even shock some. I bought a bicycle, a mountain bike to be more accurate. It probably won’t surprise that I bought it off Ebay, so it cost a mere 26 pound (it cost more than twice that to get helmet, lock, light etc). Two reasons – the long walk to and from the train station, and the fact that I hadn’t really sorted out very much to do for the weekend. So I decided upon a weekend in Stratford, with a trip up to Warwick to see the Castle on the Sunday – a 22 mile round trip. Went down after work on Friday, back to the YHA, had a lovely dinner at the flash country hotel across the road and was set. Saturday, I was a little disturbed by the fact I started reading the Guardian at 10:00 in the morning and didn’t finish for three hours! Pretty relaxed day all round, really.

After getting back from a wander around on the bike (and retrieving the phone I left at the RSC theatre last week), another surprise: I watched a game of rugby. England and Ireland were playing in the six nations. Not a very good game – the Irish kicker missed most of his goals, the English team did a lot of faffing about. The thing that made it particularly interesting was that we had a school group from Ireland in the hostel, and about twenty of the girls were watching the match, and giving generally insane commentary. Their theory on why England was doing so badly? The stupid level of attention they were paying to not mussing their hair. Have to say, the one time an English guy made a break for it and actually scored, his hair did move quite impressively.

Sunday was the big mission – ten miles on a B road up to Warwick. I nearly gave it up when I learnt that I could get there and back by bus for 3.50, but I went for it. I don’t even know when I was last on a bike, probably when I lived in London, so it took some adjusting – the hard seat, my general ungainliness, the quite minor hills that would dramatically retard my progress. But, although I had two stops for a breather, I biked the whole way, no walking. And I have to say, the trip was worth the effort and more, starting with lunch, one of the best pub lunches I’ve ever had, lots of lamb and seven different vegetables at the Zetland Arms in Warwick. 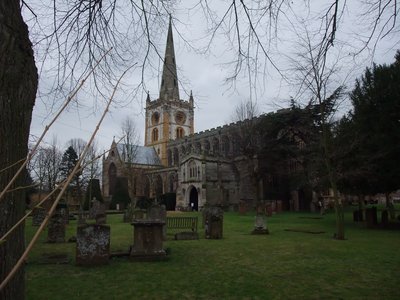 Then there was the castle itself, 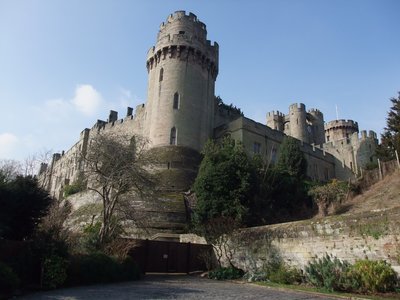 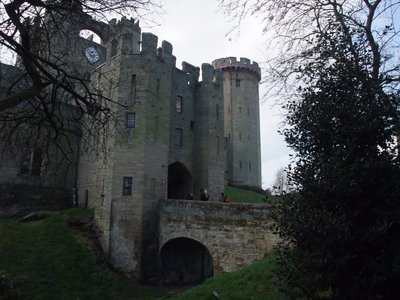 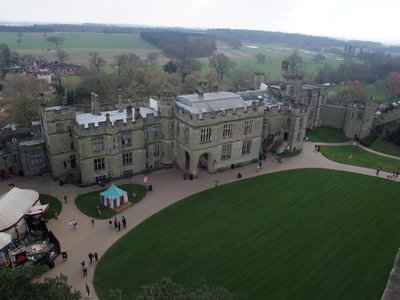 which conformed to all my imagined castles – turrets 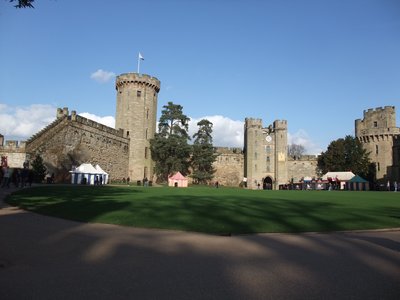 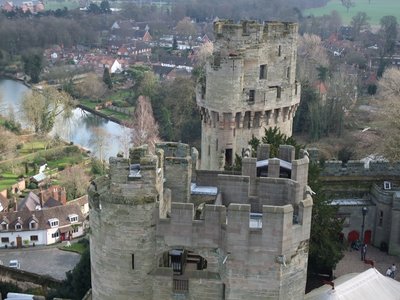 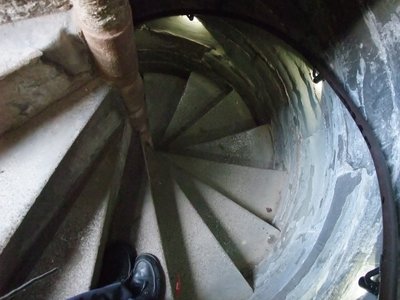 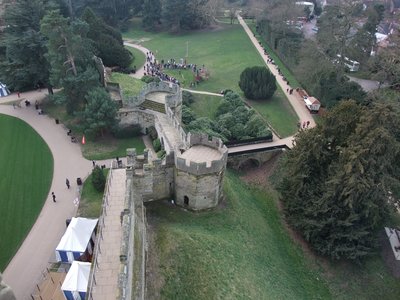 I was a bit daunted before starting on the walk around the walls, as there was a sign saying there were something like 600 steps. I thought there might be that many just to get to the top in one go and my heart quailed, but luckily they meant for the whole deal, and half of them were going back down.

Of course, there were dungeons, including the uber-dungeon i.e. the dungeon under the dungeon under the dungeon where they put the really bad people and forgot about them. The good old Duke of Warwick had one King in the second dungeon down (and another locked up in London somewhere): he really was the power behind the throne for quite a long time. Now the main dungeon area has been populated by wax models (the castle is run by the same people who run Madame Tussaud's), showing the various stages of getting ready to fight: 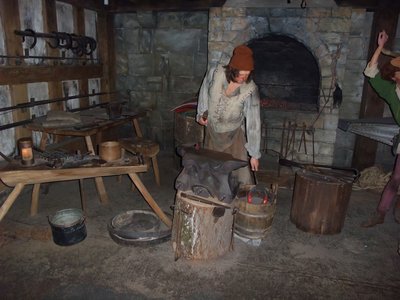 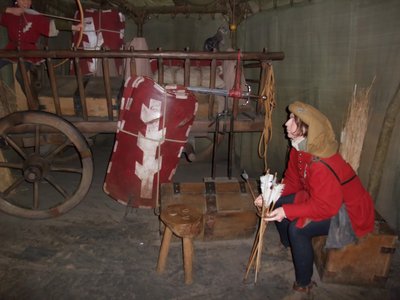 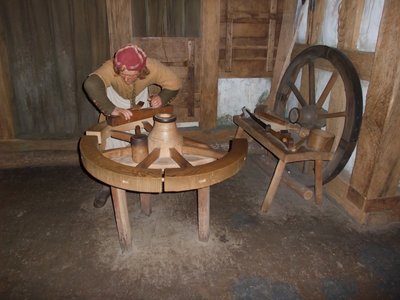 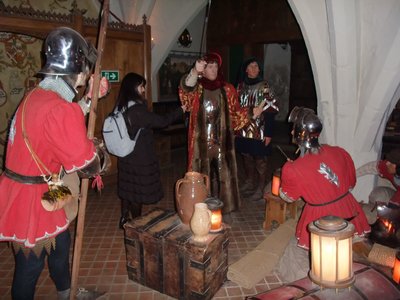 Upstairs, there were naturally some grand rooms, such as the Great Hall. 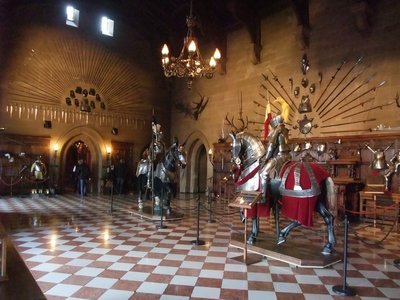 They had set things up to replicate a big dinner party that had been put on in 1898, 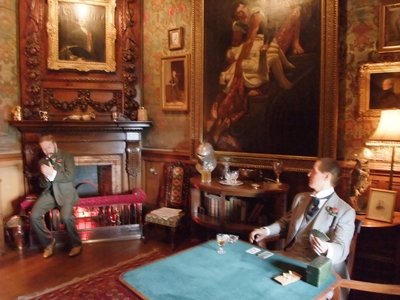 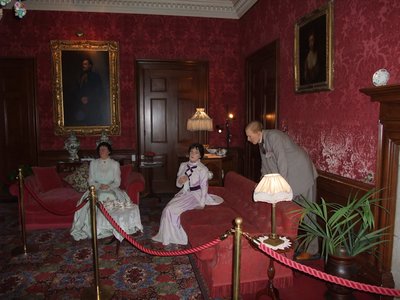 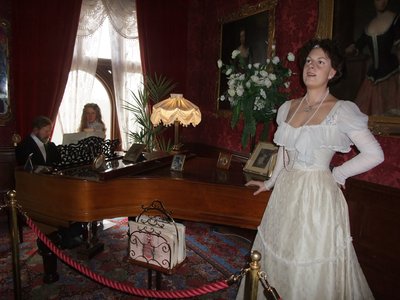 This sort of house is obviously good for parties of people who don't really like each other very much, as they were well spread out. Being 1898, it was a bit disconcerting to see Winston Churchill and Queen Elizabeth 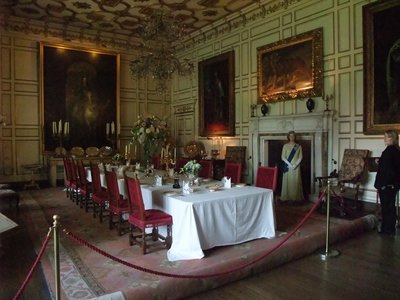 The place is HUGE, so I didn't even take photos of all the rooms, but I liked the library 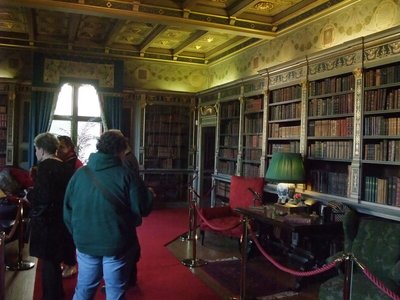 and the Duke's bedroom wall 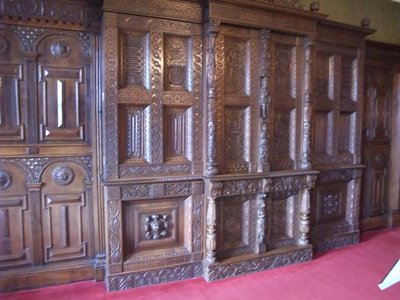 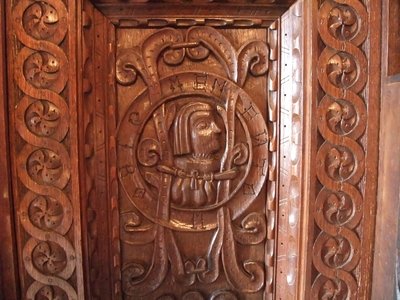 which must have taken many man hours to make.

A couple of views from the castle: 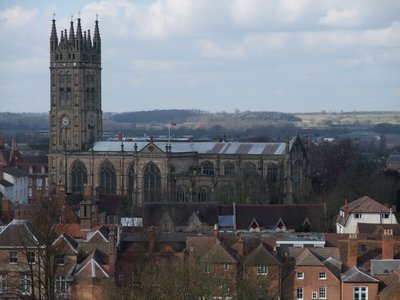 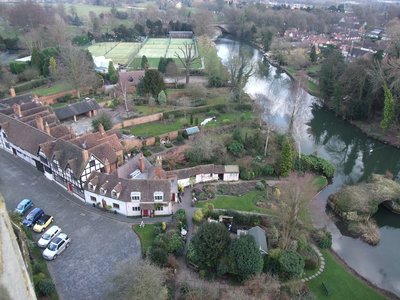 Afterwards, I was curiously reluctant to get back on the bike, so wandered the town, found a Caffe Nero, read their newspapers, so that it was after 5:00 before I left. Going back, I actually had a signed cycle path to follow, all the way back to Stratford, which I knew went near the hostel. Somehow, and I still don’t know where, I came off the cycle path and was on a normal country lane which ultimately fed into an A road i.e. one grade down from a motorway. So there I was, pitch dark, with a fairly good volume of traffic and five miles the wrong side of Stratford. I just put my head down and rode the whole way non-stop.

Dinner was in an entirely empty Chinese restaurant in a wee place called Tiddington, a ten minute walk from the even smaller place containing my hostel called Alveston. Later on, back in the hostel, things got really uncomfortable. There was this guy, I’d talked to him quite a bit, he’d even offered to share his dinner with me. We were in the TV room, and there was a woman in there – he and she got talking about music and the like, all very civil. I wasn’t paying a lot of attention, but I couldn’t not when he started really laying into her, being completely abusive about her profession – she went to get the manager, he left. Not the best way to finish what had been a nice peaceful weekend in the country.

Reading this week was for next week’s book club – Brady Udall’s The Miracle Life of Edgar Mint. He is this wee native American kid who gets his head run over by an mailman’s Jeep. His mum does a runner at that point and he’s left to fend for himself – he spends a fair while in a hospital, then gets caught up in a school for the detritus of native Indian society – all the kids who have nowhere else to be, regardless of tribal affiliations are thrown into this school, and its horrible. Of course Edgar survives, but lots of terrible things happen to him and his mate, mainly by the school bully destruction testing him. Then he’s rescued by Mormons and everything is sweet for a while – but there is this character, Barry Pickney, who has been in his life ever since the accident and threatens to stuff things up badly. It is my second read of the novel, and I still love it; my favourite bit being the day he starts to use the typewriter he’s been given and learns the joy of communication.

Posted by NZBarry 06:25 Archived in England