A fairly quiet week. Tuesday I went home relatively early, as my plan is to have at least one meal a week in Lichfield. This time it was in a Mediterranean restaurant called Ego, which served up the most delicious shrimps I’ve ever had. I don’t even know what inspired me to get them, as I’m not a great fan as I tend to find them pretty insipid in relation to the effort required to get them out of their shells. These were already shelled, juicy and very tasty. So was the main, a Moroccan lamb dish on couscous – unfortunately there was not a huge amount of it.

On Wednesday I had another night in yet another hotel in Wolverhampton, the former Quality Hotel, suddenly not because the Quality Hotel brand holding company went bust. Quite a pleasant spot. This time I was in town because I wanted to see kiwi singer Ladyhawke, who was playing support for Brit band of the moment The Ting Tings at the Civic. At the door I asked when things were starting, as I’d not eaten, and was told “they come on at 9:30”. Turns out she was either malicious or thought I’d said “Tings” when I asked when things were started, because when I got back, Ladyhawke was well into her set and VV Brown had come and gone. I have no idea what I missed by not seeing her, but Ladyhawke was doing a pretty standard rock show. A couple of the most catchy songs on my radio are Ting Ting songs, and they did put on a good show – a fairly quirky, energetic sound from just the two of them.

Thursday was another drinking session with my temporary colleagues and a bunch of PhD students in the campus bar, which stuffed up my eating plan completely – I had to make do with yet another ham and cheese baguette from the station. But I was able to put the plan into action on Friday. I don’t quite know what got into me – I was working on a piece that needed quite concentrated thought to get straight, so worked a bit late. I was very surprised to be sitting in Strada, this restaurant the Guardian said had fantastic pizzas and see that it was 10:30! My last train is at 11:15 and I’d not yet received my food, so I was a little worried. But all went well, and the pizza was very good, so I went home happy.

Not so happy in the morning, but. An early start on the bike to get to the station in order to be in town for an 8:00 train to Manchester. Found the hostel, which is right beside one of the canals 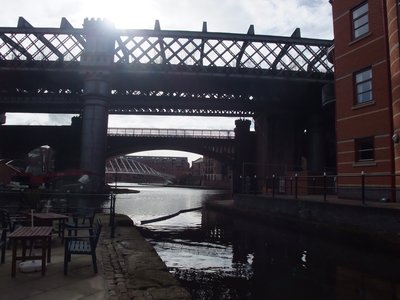 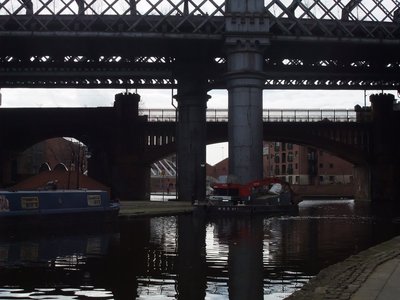 One of the sights that dominates Manchester (and gives a good landmark) is the Hilton, which is the tallest residential building in the UK. It makes for a pretty stark contrast with its surroundings: 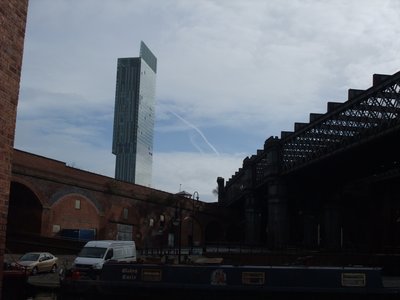 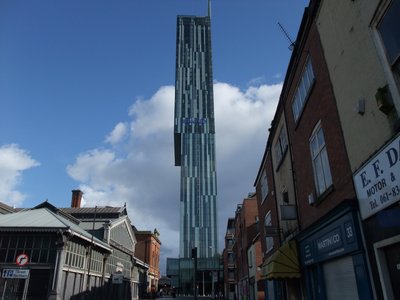 A fellow at the hostel sent me off up the street for breakfast, walking up Deansgate, I was impressed by this building 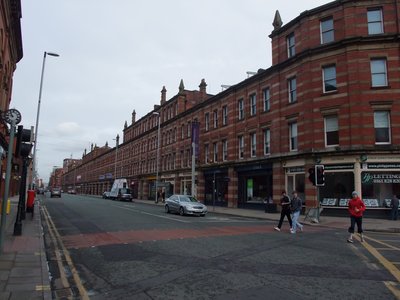 It is the former rail goods shed, slightly renovated and turned into shops and a cinema, and presently for sale. The breakfast was as good as promised, made even better by the addition of a tea cake. Going up to pay, I was doubly bewildered. First, by the fact that the woman (who I had already noticed was aesthetically pleasing) gives me this long sustained smile that has my knees turn to water. To add to the confusion, she then starts talking to me, and what she says is absolute gibberish – she may as well have been saying bishneewahpoopoo for all I could extract from what she was saying. One of us had to be mad, I decided.

Turned out, she thought I was Romanian and had been speaking to me in Romanian – all because she’d noticed some Romanian currency in my wallet. Poor girl, must have been missing home to be so keen to see a presumed countryman. 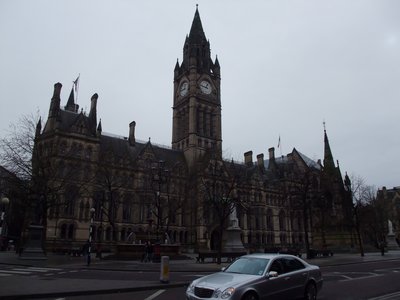 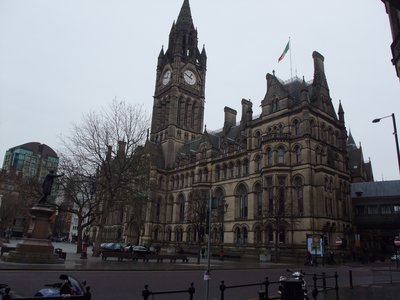 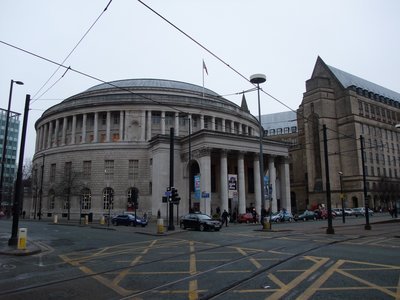 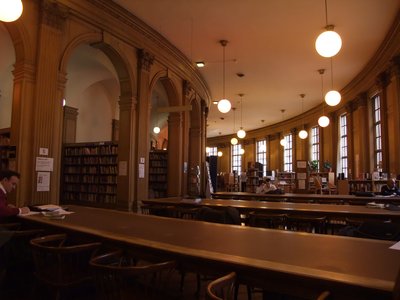 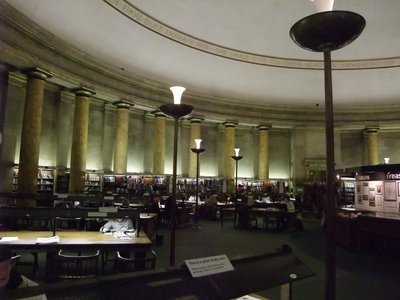 There is a downside to circular libraries - this one had fantastic acoustics, so not only could one hear a pin drop but also the echoes that reverberated around the inner sanctum. The outer ring was OK, however, and I was able to work quite peacably there. The Art Gallery was pretty standard, apart from the top floor which was given over to modern designs, particularly chairs 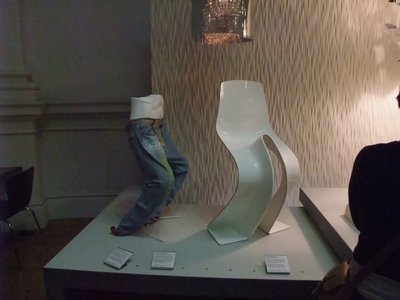 Yes, these are both chairs! I would have liked to have tried the one on the right. The one on the left, which looks like a pair of jeans IS a pair of jeans, but there is some sort of folding contraption contained within them that let them prop you up. Crazy! Reminds me a little of Huxley's pneumatic pants.

One of these days, I must stay in a hotel like the Midlands Hotel 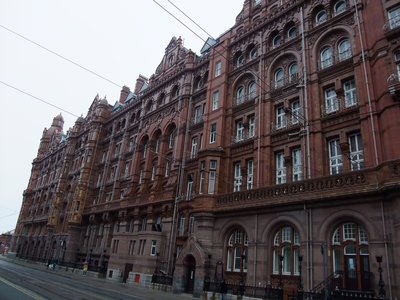 Later on in the afternoon, I paid a visit to the Museum of Science and Industry (MOSI) – a huge five building complex near the hostel. I only made it through one – aviation. 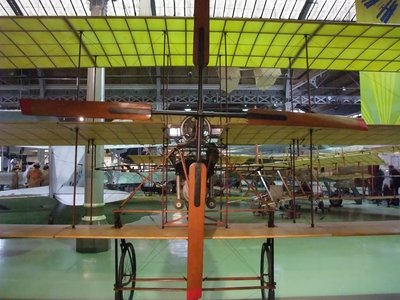 This is a replica of the first plane to fly in the UK, made by one A V Roe, who went on to form the AVRO aeroplane company. They made this, which has to be the world's smallest airliner (it had ONE passenger seat! 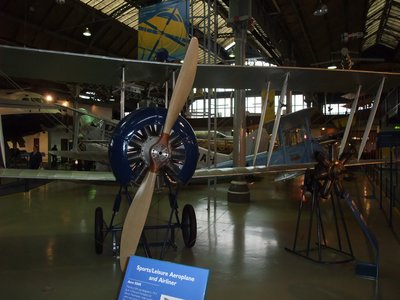 AVRO did get to make bigger planes, such as the Lancaster bomber (this is actually a derivative, the Shackleton surveillance plane) 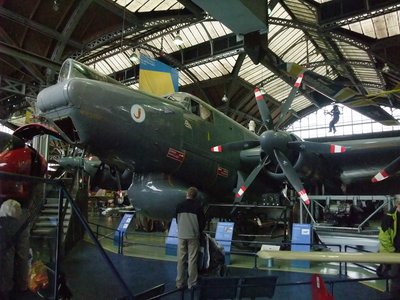 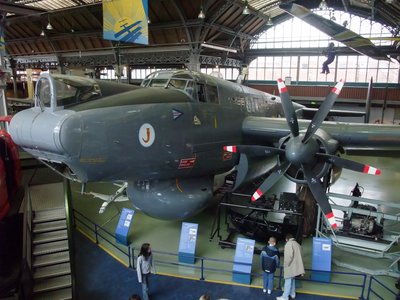 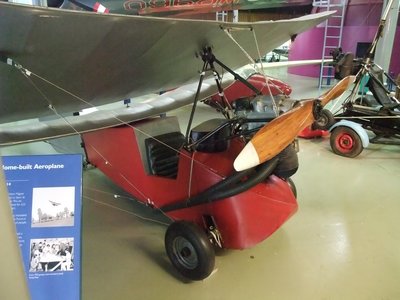 I did like this - I wonder if I could get my brother to make me one, it looks like fun 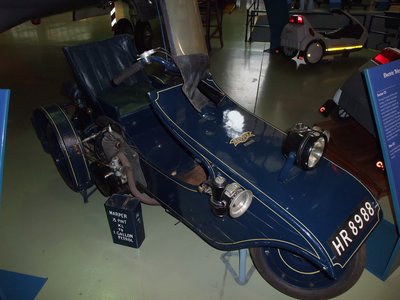 A couple of other random images from the aviation display and I'll stop for this post: 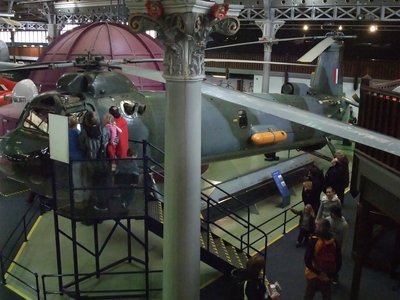 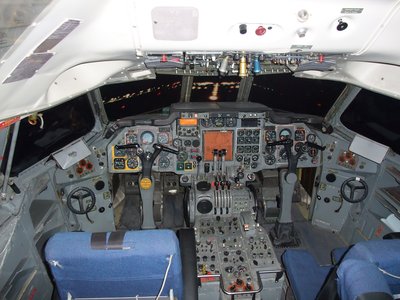 Posted by NZBarry 15:18 Archived in England