Why Grenoble? When I looked up where you can fly to from Birmingham on Easyjet (I won’t do Ryanair, I find them obnoxious and have so many random charges, soon to include use of the toilet, I have no confidence they’re cheaper), it was either Grenoble or Geneva and that was it. £43 return is still a bargain by reference to what I normally pay to fly.

Birmingham International Airport certainly adds a comedic touch to flying. I had arrived nice and early, with a big warning on my boarding pass that the gates close at 17:55 – if you’re late you don’t fly. So I get to the gate area about 17:20 – there is a sign saying “Don’t come down to the gate until we call you”. Fair enough, but then I find another sign “This is a silent airport. We do not make announcements.” Then the monitor says my flight is “boarding in 30 minutes” i.e. after the gates close, according to my boarding pass. It would have been nice to find an Easyjet staffer to get clarity but, until boarding starts, there is no gate to go to. I am damn lucky I didn’t take it as gospel, because after about 10 minutes, the message was suddenly “boarding now”. Funnily enough, I was first onto the plane – I went out through the gate to the accompaniment of the fellow behind me saying “we paid 12 pound for priority boarding and we’re not even first on”.

Despite their budget nature, Easyjet was fine to fly and even provided a moment of amusement. Going to France they of course needed safety announcements in French, but it soon became obvious that my French was far superior to that of the cabin attendants. They’d play a tape to get the French announcements then have anxious heads cocked and whispered conversations while it played, as they worked out whether they played the right one.

My hotel, the Trianon, is in an interesting area – lots of little cafes and bars and an assortment of shops, all at the ground floor of four storey apartment buildings. I arrived too late for anything to eat from these cafes, so wandered into the centre of town and found a burger place, basically a French version of Maccas, I’m afraid. I saw nothing specifically visually spectacular, just a pleasant area. That seems to be the case for all of central Grenoble, so only took a couple of photos: 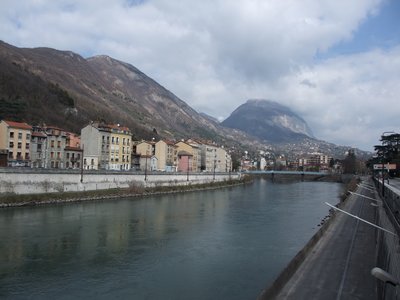 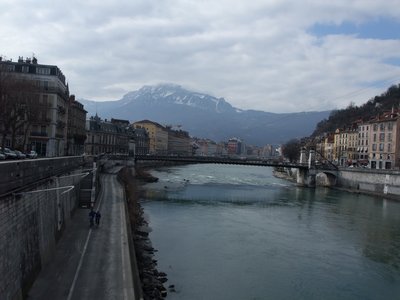 Sunday was a disaster, eating and entertainment wise. Why did no-one tell me that shops mostly don’t open on a Sunday, and only the kebab and pizza cafes do? My hopes for a nice French dining experience were dashed – as it happens, even when they were open, I didn’t do much better. The menus seem pretty generic – steak, chicken, salads etc - or very expensive. So lets not mention what I ate in Grenoble.

Monday evening I went off to see Harvey Milk – curiously, Grenoble seems to have at least as many English films as Birmingham, and a wider variety, along with other international films (plus a good range of French films). Milk was a pretty impressive character – after years of repression, he moves to San Francisco, randomly starts a shop (“Castro Camera”) and not only comes out as gay but kicks off an entire movement (at least according to this dramatisation of his life), ending up as, essentially, a city councillor. I came to enjoy Sean Penn’s portrayal and became engaged in his fight for rights. I do wonder if Anita Lane, the fundamentalist Christian who had started the counter-movement to revoke anti-discrimination laws, was as horrible as portrayed in the movie.

Tuesday was an early start – I (quelle surprise) had a train to catch, to Turin. I was looking forward to a trip by TGV through the mountains, but it wasn't all that: the train was surprisingly slow, and the mountains were peirced by a long tunnel.

I knew virtually nothing about Turin, apart from reading on the internet that it is the home town for Fiat, Lavazza coffee and Nutella. What I found when I arrived was a very gracious city, 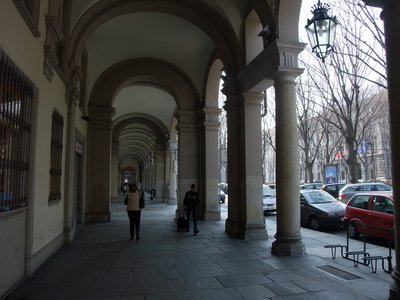 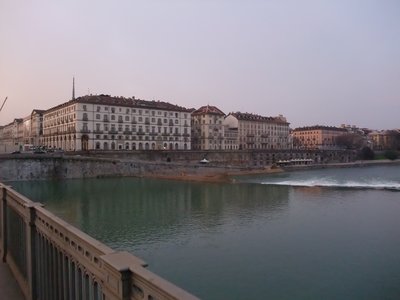 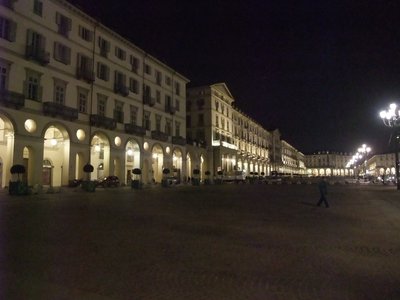 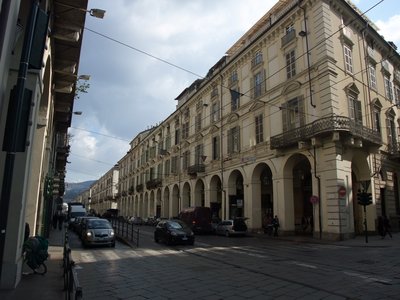 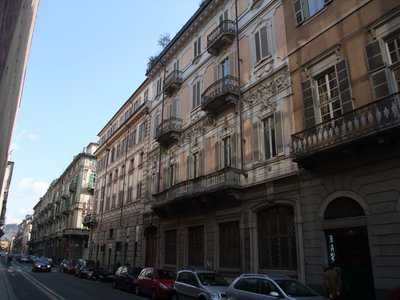 with an inner centre largely untouched by any impulse to development. Although it is ostensibly set out in a grid of solid looking stone buildings, built around the palace 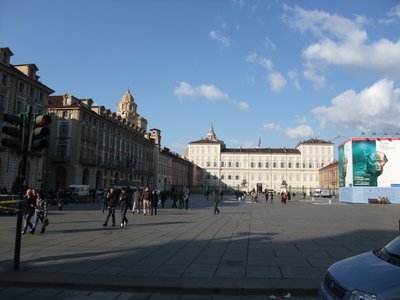 this pattern was frequently interrupted by piazzas so at almost every corner I’d have a surprising and pleasant sight. 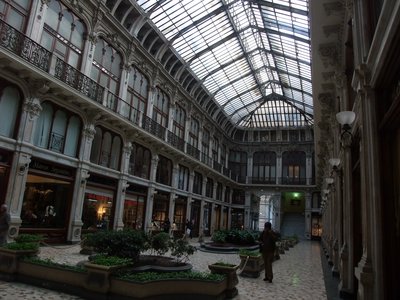 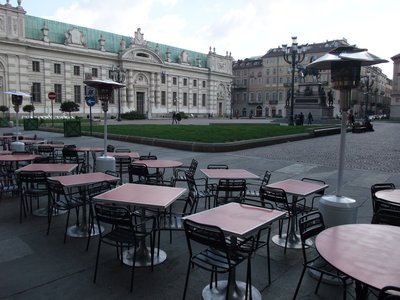 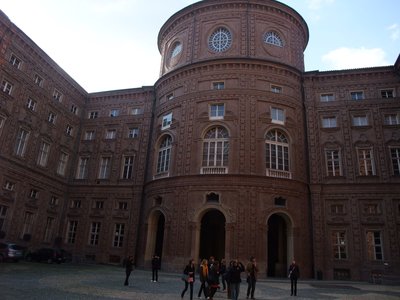 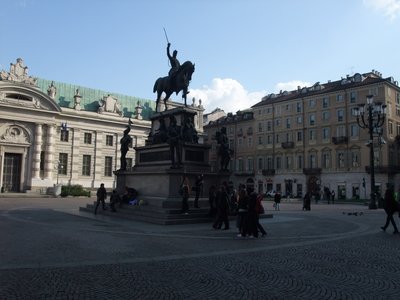 Occasionally there would be a scary one 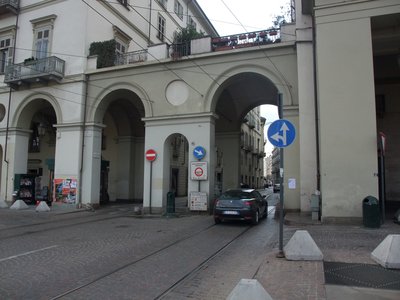 – trams and cars would come out without warning

Here, I had no problems at all finding authentic local food, although the menus completely bamboozled me to the point I still don’t quite know how to order a coffee to meet my tastes. So evasive was the language that I even had trouble finding the gents in one particular restaurant – while I thought Donna was woman, what looked like Vomini also made me think of women. My first meal I got round the problem by the good old method of pointing at what someone was eating and hoping for the best. In another, I could point to the kitchen staff what I wanted them to make for me and another they had all the meals lined up in a cabinet (and could explain them). Best of all was the concept of Apertivo - after work, bars put on a buffet. You go in, you buy a (slightly expensive) drink but then you help yourself to what can be a substantial meal - a lot of food was like the Spanish tapas, but there were main course type meals as well, such as a delicious seafood risotto steaming away in a large flattish woklike pan.

But I finally came face to face with an Italian menu in quite a fancy restaurant, no English speaking staff, nothing to point to, nothing on display. All I had to guide me was the ability to eliminate olives, and to recognise a few basic words like wine, tomato, meat and black pepper.

Not that this helped very much – I ordered something that had linguine, white wine, black pepper, no olives and got this: 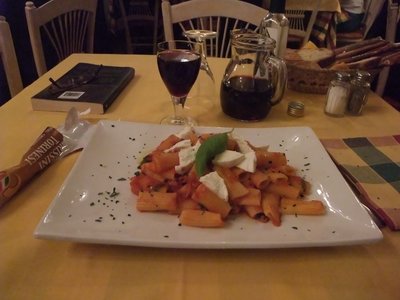 (yes, they gave me the wrong dish – I’d thought the pasta didn’t look like linguine but, hey, what do I know). For my main, all I could work out was grilled meat, and got this 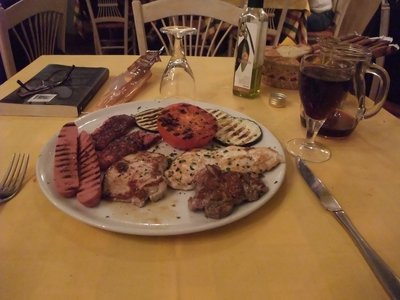 I did envy the woman at the next table – she had an enormous salad built around what looked like a small castle made out of pastry. Every so often, it seemed to me that I was catching some sort of movement from above me; sure enough this “lady” was waving 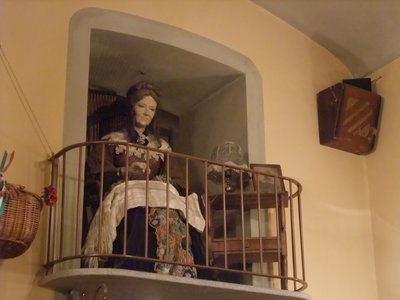 I stayed in the Turin youth hostel, which was not particularly flash, but was in amongst an area dominated by posh houses and major churches, 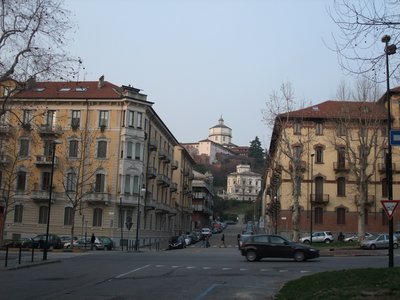 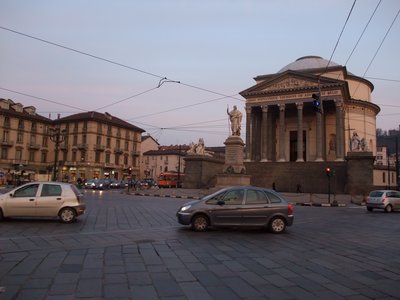 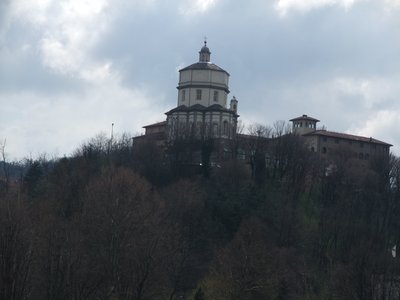 It worked out pretty good as a place to work, as during the day it was deserted. On the Friday I did take some time to go see the National Film Museum, which is in what was the tallest brick structure in the world 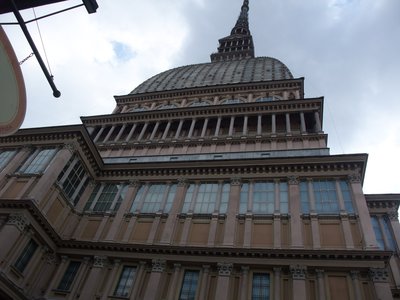 To be honest, the museum was less than I’d hoped. Quite a few little spaces set up like film sets showing snips of movies to suit 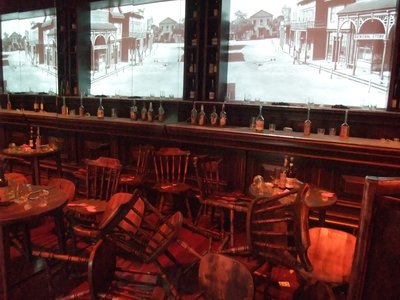 with the road runner one being the funniest 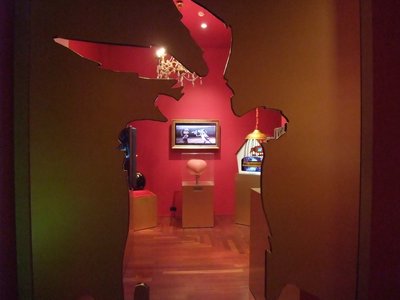 The main event was the grand hall, set up with a couple of screens, showing snippets of various films connected together by themes (such as song and dance) 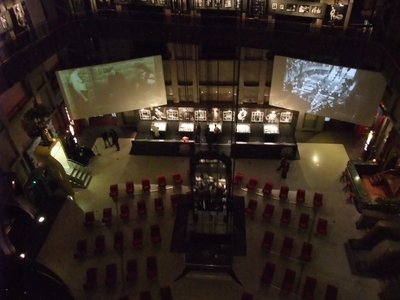 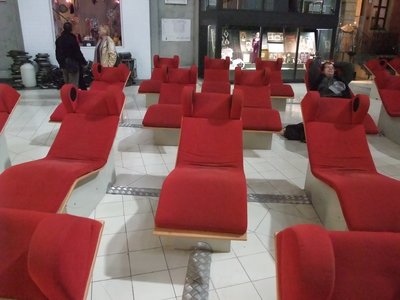 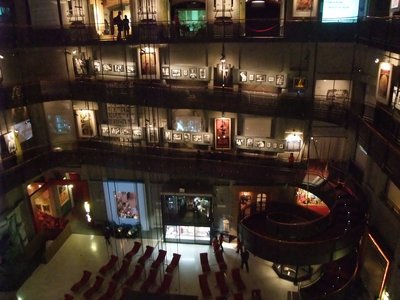 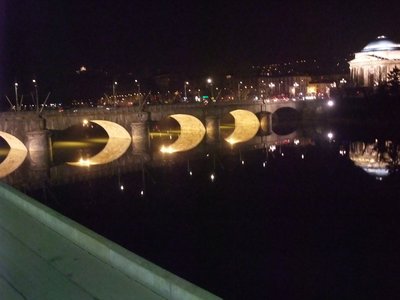 Back in Grenoble, I finally managed to find an authentic French meal for dinner – galletes (a sort of pancake from Brittany) and crepes. I also saw the Watchmen movie.

I managed to read through the Watchmen graphic novel, which resolved into a relatively straight-forward narrative, if you discount a couple of levels that don’t add very much (which is exactly what they did with the film). The basic idea is that there is a community of costumed heroes, crimefighters but lacking special powers, and one super hero (Dr Manhattan) who, thanks to an accident in a nuclear plant, has power over matter (although not, it seems, sufficient to change his colour away from blue) and sees all moments in time at once. He is the American ultimate deterrent against nuclear war.

I’m no expert with comic book heroes, but it seems to me that they are traditionally engaged in the age old fight of good against evil but in the world of the Watchmen, the heroes face a problem similar to that faced by Bulgakov’s devil under Stalin – what if there is no unambivalent good to preserve? You might need to take extreme measures for the good of humanity - save society from itself. Dr Manhattan's world view is that there is no difference in substance between dead people and live ones - they all have the same number of particles.

I also read Damon Galgut’s The Good Doctor – a book from South Africa which one the Booker a few years back. I am not sure who “they” were, it isn’t made clear, but they established areas of land for the black South Africans, which was supposed to have services established equivalent to areas occupied by the Whites. This book was set in post-apartheid South Africa, in a hospital set up in the capital of one of these lands, one that has not found favour with the locals so hardly anyone lives there, let alone uses the hospital. The main characters are two doctors - one from the old days who has trouble dealing with the new, and another young doctor, full of idealism and ready to change the world. But is it ready to change, when the ghosts of the old way are still around?

This was a quick, one day read, so I had to resort to the emergency supply on my laptop - Wilkie Collins' The Lady and the Law. The lady in question finds there is a deep secret to her husband, one which makes him flee her in shame when she finds it out - that a Scottish jury had found it "not proven" that he poisoned his first wife. Valeria loves Eustace, so of course he is innocent, and this must be established.

Up to now, I have been engaged in reading and preparing a literature review (some 50,000 words worth) but this week, I finally started writing up my paper. I was able to put my head down, and by the end word count had gone from 0 to just under 10,000 words.

Posted by NZBarry 06:02 Archived in Italy