Llanberis has one of the Guardian's Top Ten Breakfasts in the UK, at Pete's Eats, but my hotel fed me handsomely on a big English breakfast and, oddly, watermelon so I decided to head west. Yes, my ultimate destination for the day was South East of Llanberis but I was taking the long way round - back to Betwys-y-coed and up to the North coast and around. The day was bitterly cold, so I didn't hang about anywhere in particular, but what a fantastic drive.

I did start to develop a bit of a complex, however. When I first travelled to the UK, I took it personally when I saw signs on pubs saying "No Travellers" (kids from New Zealand have no idea what a traveller might be, other than someone who travels). But the Welsh are just downright mean to me and my family. How else do explain these signs, which are all over the place? 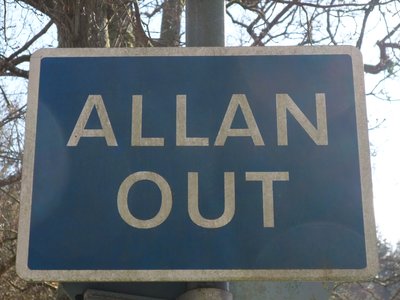 I wasn't having any of that, so carried on my merry way.

I was only going 15 miles, but there seemed to be plenty of distractions - one of the many castles established in the 13th century to defend Wales (behind a wall so I never saw it), a woollen mill with interesting things to try on (and, you know, if one of the flat caps had actually fitted, I might have bought one), more narrow streets 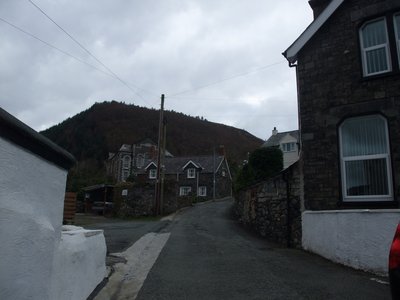 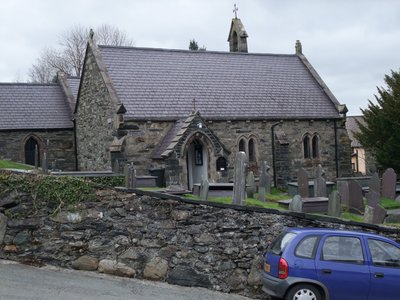 Finally, in Conwy, I got to see a castle 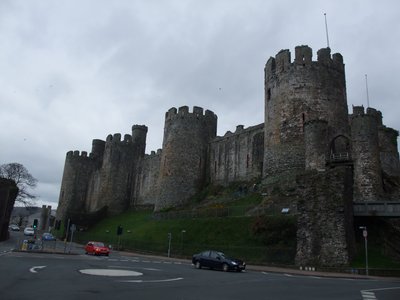 and a bridge (Thomas Telford's Suspension Bridge, lots of signs and postcards informed me. No, I don't know who he is either.) 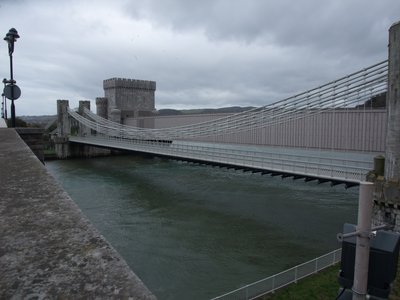 It was far too cold to be hanging about looking at castles, so I went to Llandudno 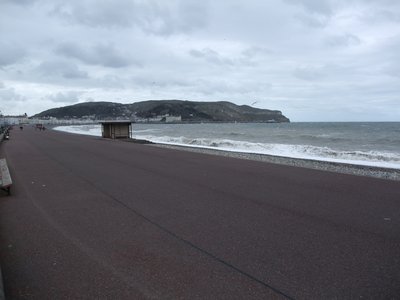 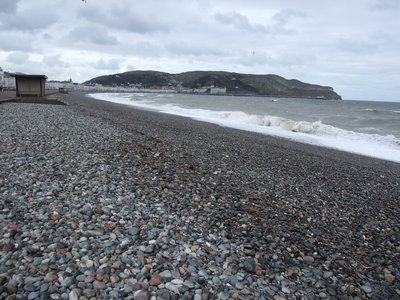 Yes, its a beach. According to my guidebook, it is the finest Victorian resort in Wales. One thing I didn't really like about it was that on the front, all the buildings are either houses or hotels 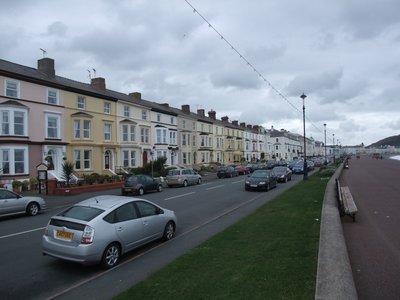 - no cafes where (if it had been a warm day) a day tripper could sit and take a meal. They were all on the side and back streets, along with all of the brand names that make up your typical British High Street. I sat in the car transfixed by a remake of a Tony Hancock skit, and then headed off. I had castles to see. 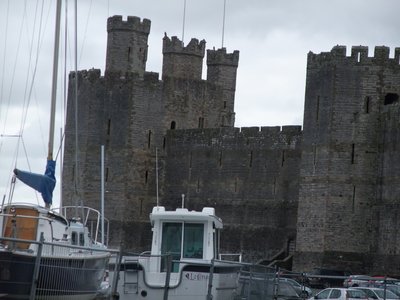 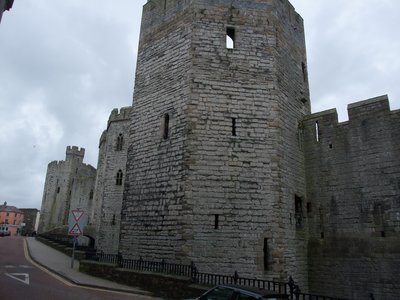 That's Caernarfon Castle - it is all of 7.5 miles from where I slept last night! Down the road 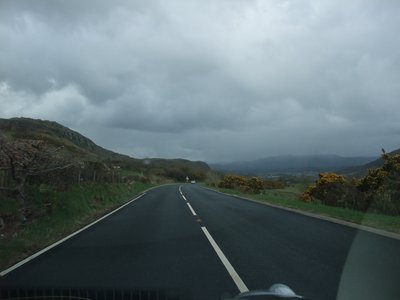 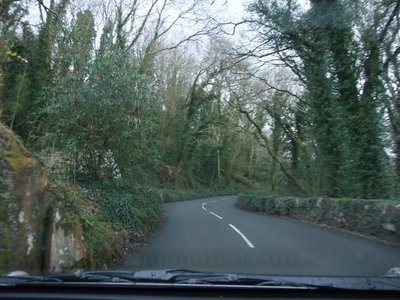 to Porthmadog, a place the guidebook says is far better to travel to than arrive at and then had some tosh about how it was designed and built to be some sort of perfect town. Couldn't see it myself, but did find some nice chips to tide me over. I snuck over the "toll road" without paying my 40 p toll to Harlech, 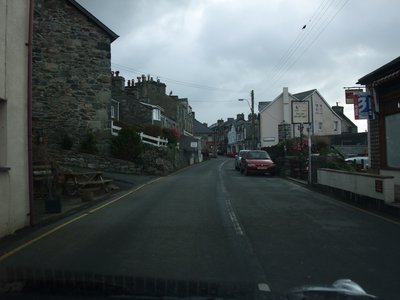 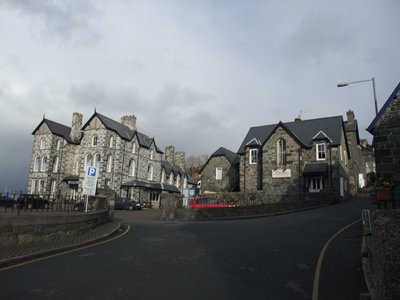 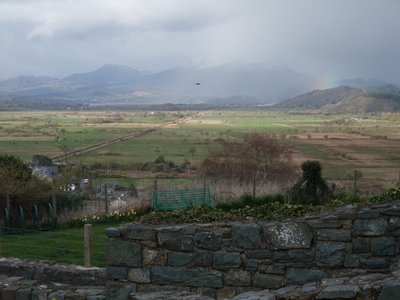 scene of yet another castle 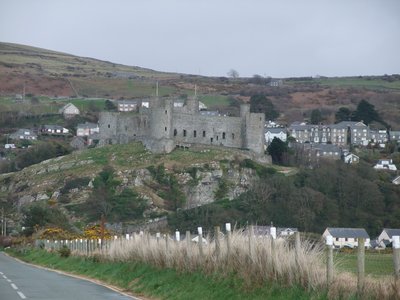 The coast north of Barmouth was just lovely 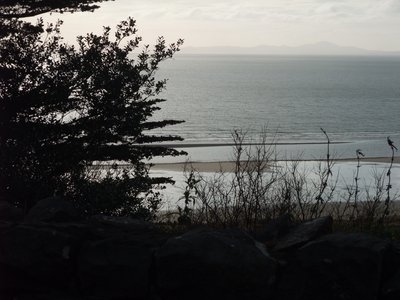 and attracted some castles of a very modern sort 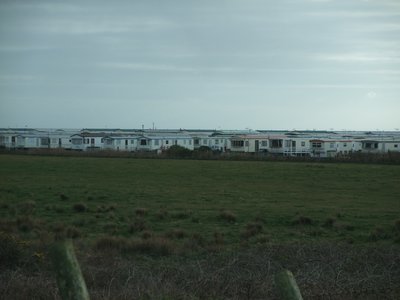 Barmouth seemed a nice enough town, and has a huge beach, at least a couple of miles long 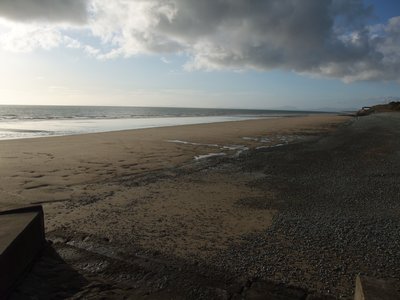 I have a funny feeling there was yet another castle I saw, but if so, there's no photo. Heading down south of Barmouth, it was starting to get dark so I had to stop farting about and head for my destination, a wee town called Borth. It is a few miles up the coast from Aberystwyth, another town I have had in my imagination for a long time - it is in fact the first place in which I applied for an academic position. After checking into my hostel in Borth and finding that it offers little for the hungry motorist, I headed over the hill into Aberystwyth. The cold soon stopped my sight-seeing: I resolved to turn in the next door providing food, and thus it happened my dinner was Greek. Quite nice, actually, a very slow cooked beef casserole, just what you want on a cold Welsh night. 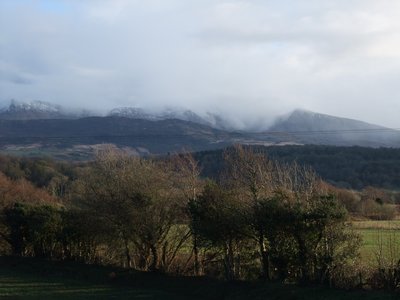 Posted by NZBarry 14:51 Archived in Wales