Yesterday was all about coasts and castles and coldness. Today was about warmth and inland destinations, one of which I managed to fall in love with. 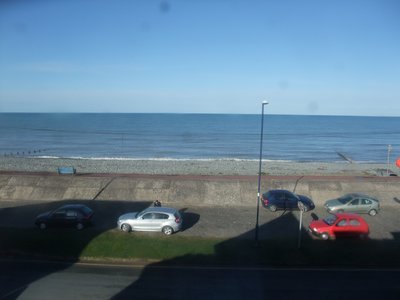 This is the view from my hostel bedroom at Borth. The road over the hill to Aberystwyth was a little less scary in the daylight, but still very narrow 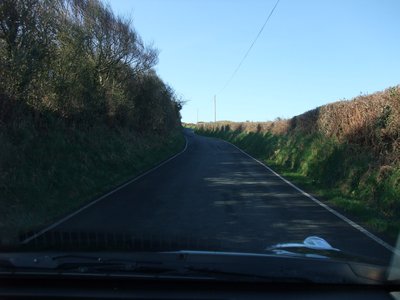 I only really went back to Aberystwyth because I wanted to see if Galloway’s bookshop was open – after something like 130 years of being a family business, they have finally decided that life is too hard and are closing their doors for ever. Sad. Plus they were having a 25% off sale, but they don’t open Sundays. I wandered around a bit, was so impressed with this 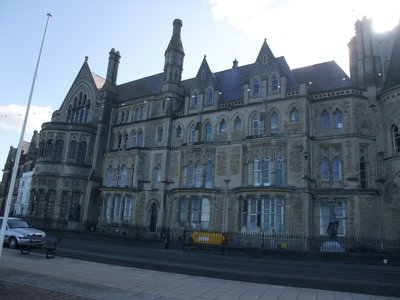 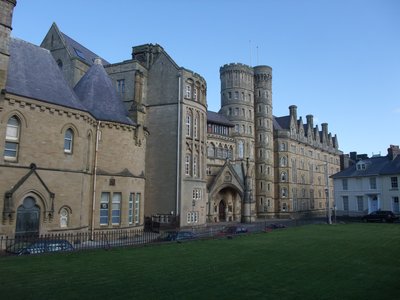 I had to ask a passing gentleman what it was all about. Apparently it used to be a hotel, but when it went bust, was taken over to form the original campus of the University of Aberystwyth. Still in use and much nicer than the new campus up on the hill, and what a location, right on the waterfront.

Heading north, my first stop was Machynlleth, which was (briefly) the site of the Welsh Parliament at the beginning of the 15th century. 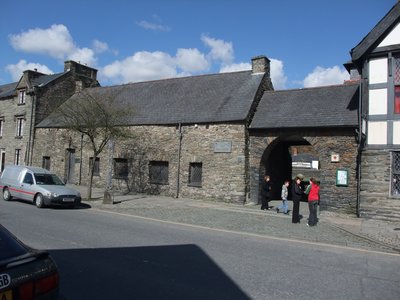 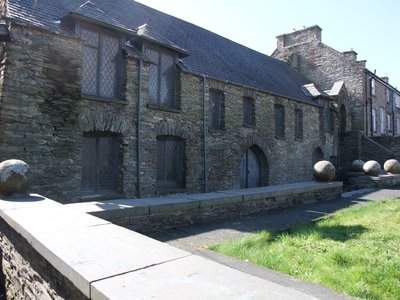 I wonder how many MP’s they could fit in there (and whether THEY had problems with MP’s double-dipping on their second home allowances).

After this, I was on the southside of Snowdonia 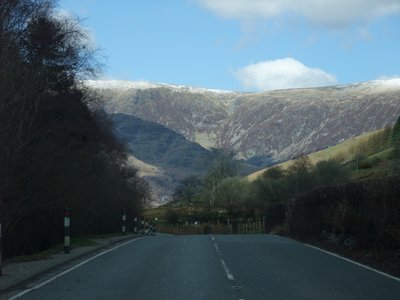 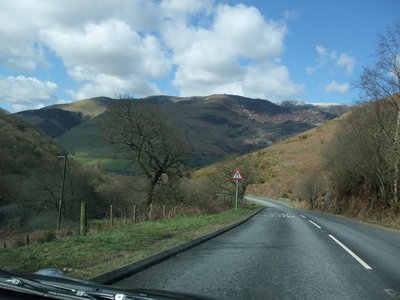 and then it happened: I came round a corner and over a wee bridge 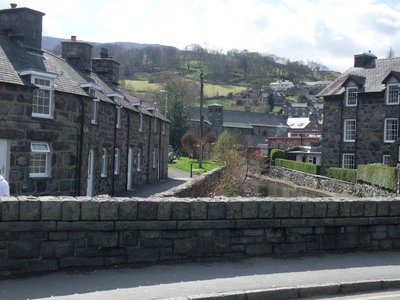 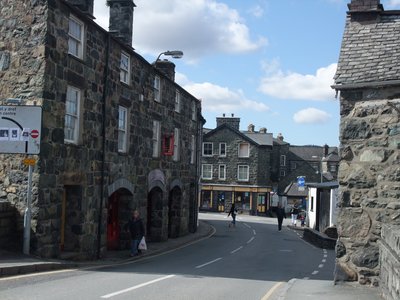 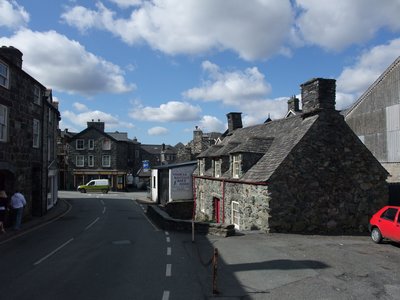 This is Dolgellau – reading my guidebook later, I saw that is one of the best preserved traditional Welsh granite towns there is. 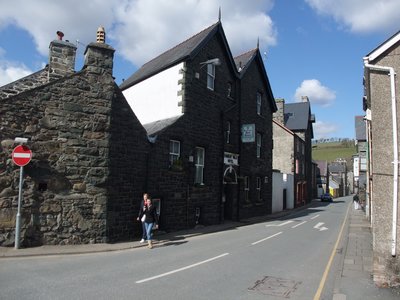 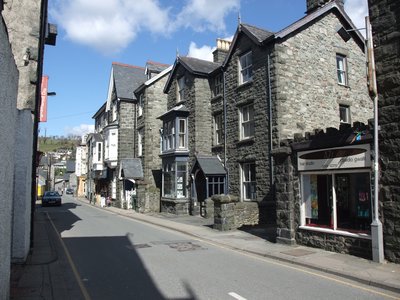 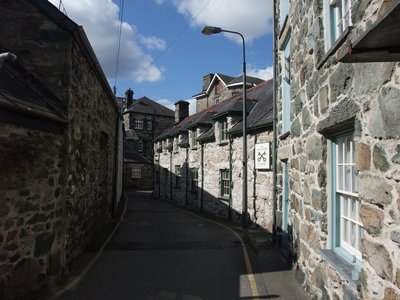 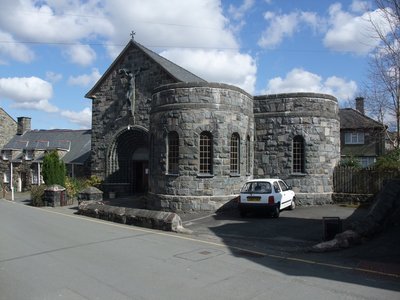 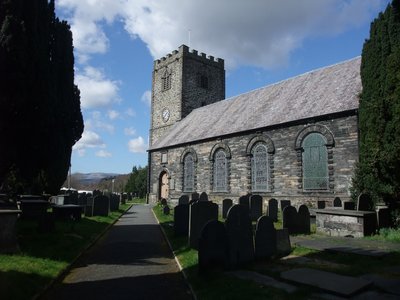 I took so many photos my camera battery died. No worries, I took refuge in a cafe and charged up 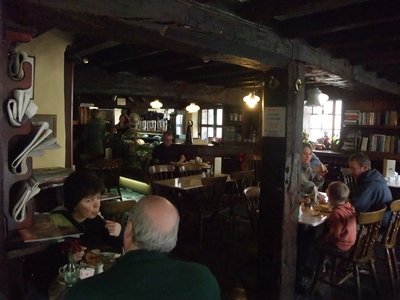 I had a lot of fun in the visitor centre in Dolgellau, more fun than I thought possible. I was curious about coming back, so asked the charming lass how to get there by public transport; apparently you come through Machynlleth. Hearing this said with the proper Welsh pronunciation is a thing of joy - I contrived to have her repeat it. After about a dozen times, I thought I had better go, otherwise she might think I was a loon.

After this, I had to get a move on to get back to Telford before dark, with only the occasional stop for photos - I was impressed by this church (it hasn't come out as clearly as hoped - it is sheathed with corrugated iron, but it is the colour which got to me) 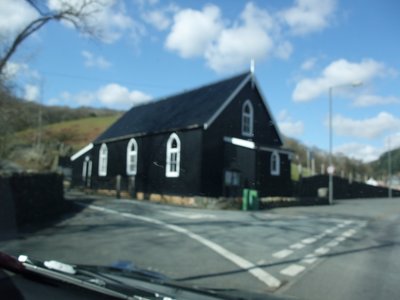 then it was goodbye to Snowdonia 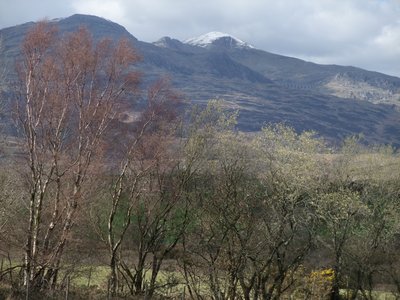 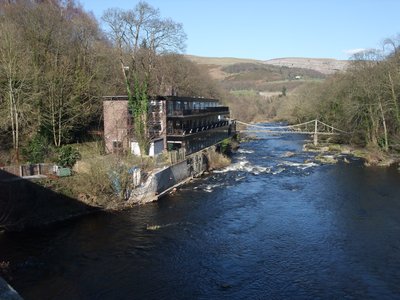 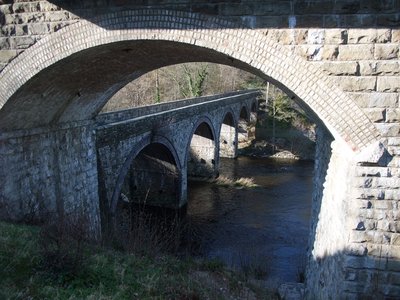 There was a reason I had started in Telford - it is a few miles from a place called Ironbridge, which is where the Industrial Revolution is said to have started. It is here that Abraham Darby was the first to use a blast furnace to make iron in 1709, and a whole industry built up around him. There are ten museums devoted to this early phase of industrial history, and I've been wanting to go explore ever since I hear about this place. Unfortunately, my planning was a bit off - I didn't get down to into the Ironbridge Gorge until about 5:30!

It is a beautiful spot 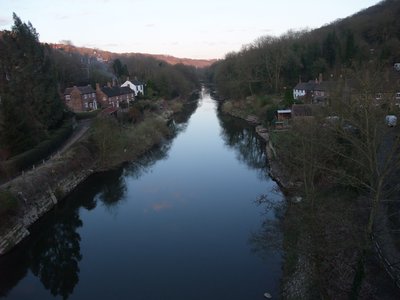 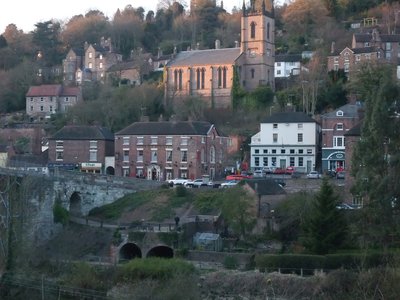 and yes, there is an iron bridge, the first cast iron bridge in the world, built by Abraham Darby III in 1779 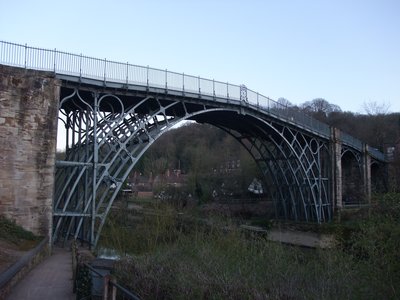 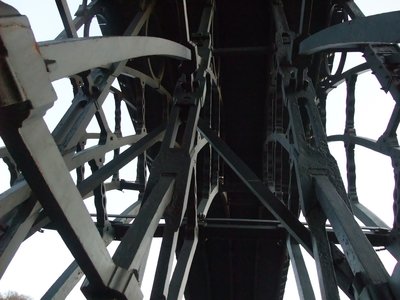 Thomas Telford, who built the Conwy suspension bridge that bears his name was strongly influenced by Darby's bridge but refined the design considerably. His Wikipedia entry reveals him to be a quite remarkable man who did a lot in the early 19th century to design transport links all around the UK.

The town of Telford, named in his honour, is a disaster. It is a near new city - basically a bunch of roads built around a mall, with none of the bars, cafes etc that you'd expect to find in a place housing 200,000 people. Only now are they investing to build up this essential element. The only place I could find to eat (apart from the Motorway service area) was a Beefeaters; they managed to stuff up every element of my dinner. The only element that was cooked nicely was something I hadn't ordered, so I don't expect they'll be seeing much more of me.

Posted by NZBarry 15:43 Archived in Wales