Wales was not the only place to make me feel somewhat unwelcome. On the last day of March, I struck a triple whammy. I'd arrived home late on the Monday night, and didn't really think twice when I noticed my landlord's desk was missing. In the morning, however, it was a bit more than that; there was a strange car in the driveway, strange voices in the house and various items that I really didn't think were my landlord's, such as a pair of turntables. At work, I found I had lost my office key, and the fellow at the key cutting shop had two goes at cutting a replacement without success. And, worst of all, at around 4:30 I found out that my computer access was about to be cut off because it was the end of my time at Birmingham - despite me telling everybody I was leaving at the end of April. So, all in all, I was feeling just a little lost.

Not that I could get too worried, because I had a date. My bookclub friend had agreed to come for a drink and a movie; it turned out we were both a bit late, so it was just the movie - Duplicity, with Julia Roberts and Clive Owen. There were smart elements to it, but a very long and tedious set up of the commercial background to the plot slowed things enormously. Afterwards, we wandered back through town to catch our respective trains. There is something I'll be doing next week; when I revealed it to her, she had conniptions because she'd tried hard to do the same but had missed out.

Wednesday, all my problems got themselves sorted out: my landlord had swapped houses with his daughter without telling me; Birmingham gave me a month's extension on my stay, and I found someone to cut a proper copy of my key. Actually, I didn't so much find him as return to him, as this is not the first time I've lost the key to the office. He operates from a shop which seems to mix elements of Arkwright's shop in Open All Hours and Steptoe and Son - a hardware shop stuck down a side street stacked to the rafters with a weird and wonderful selection - you have to thread your way between piles of stock and the old Indian fellow sitting eating his lunch or sucking away at a cup of tea and then wait while the key is laboriously filed. So, to celebrate everything coming right, I went to a French bistro in town, Chez Jules, and had the kind of food I had found so elusive while in France - a wonderful braised beef dish.

Then the very roundabout start to my Easter break started. I had to see a fellow at Southampton University for my work, so decided to take the weekend in Cornwall. I had a bit of a cock up on the transportation front (does anyone remember Jimmy (played by Geoffrey Palmer) from The Fall and Rise of Reginald Perrin these days?) Instead of organising the train to Southampton, I had bought a ticket to Portsmouth - an expensive mistake, as it cost the same again to go the last twenty miles to Southampton. There, I was finally reunited with Travelodges. I didn't really see very much of Southampton - I spent the morning at the University (MUCH better coffee and food than at Birmingham), saw my man and collected another rental car.

I only had a short distance to go (another cock up on the transportation front - as events transpired, I should have pushed on further West) so decided to dawdle, taking a detour in the New Forest (which is not that new, and only vaguely forest, but there are horses) 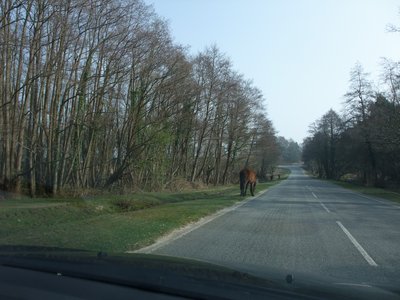 After a while, I found myself in a very cute village called Beaulieu 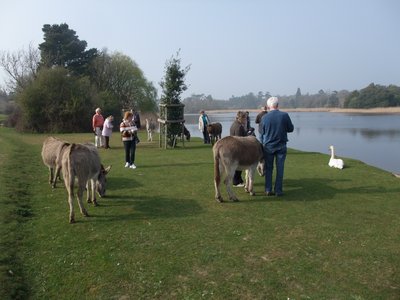 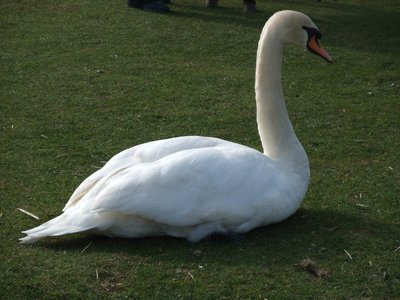 It is famous for its Abbey 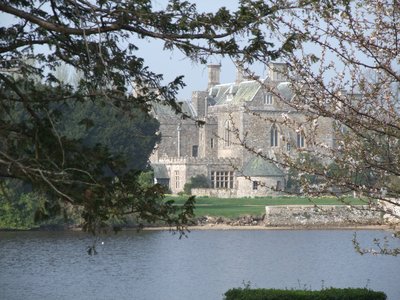 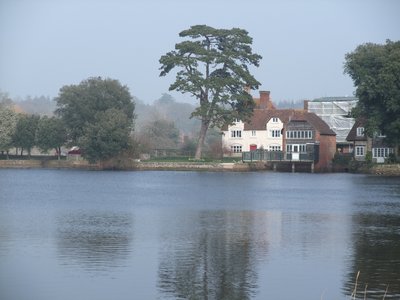 There is also a motor museum; while I didn't actually see it, the local car dealer may as well have been a museum 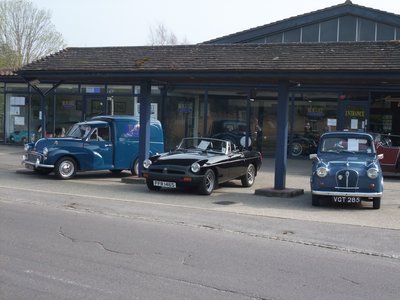 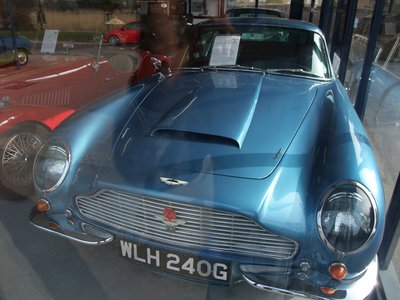 That's an Aston Martin, by the way. Eighty-five thousand quid, if you're interested.
I couldn't quite see how much they wanted for the Rolls 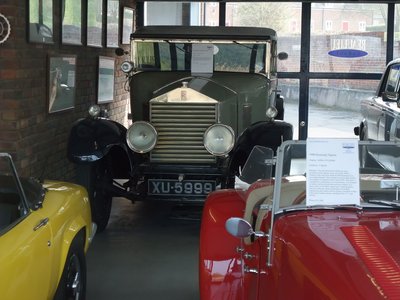 Slightly more than what I customarily spend on cars, I suspect.

Town itself was just a single street 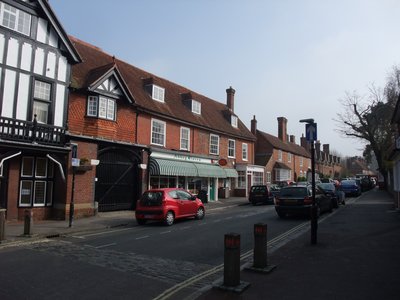 with an olde-worlde grocers and a very pleasant cafe (more teacakes!), and a cool looking school. 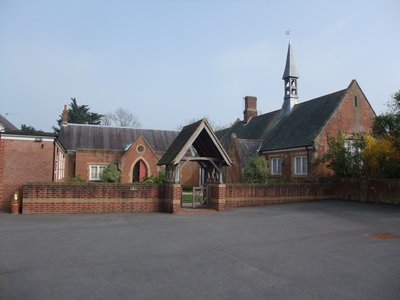 Continuing on my trek around the south coast, I came to Lymington, somewhere I would have liked to stay, it had a nice feel to it, 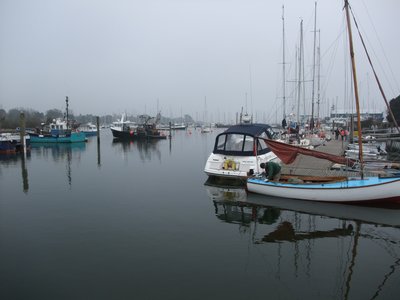 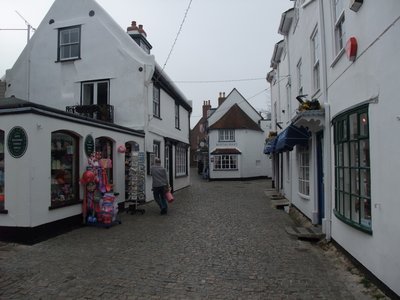 lots of decent looking cafes and B&B's but, since my trip was so short, I had everything booked in advance. I thought it a bit random to see this on the dock, with no-one in sight 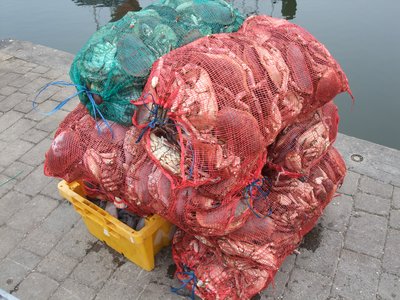 As I headed towards Bournemouth, I came across the "ancient Borough of Christhurch" and really did plan to take a look (I missed out on the "ancient Borough of Wellington", which is near Telford) but didn't spot the right turn off and found myself in a path leading inexorably to Bournemouth, where I had a pleasant stay in a very traditional English beach resort hotel. Bournemouth has a pier (closed for a private function) 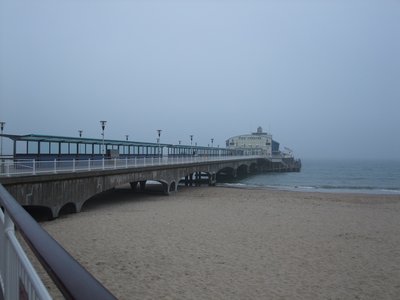 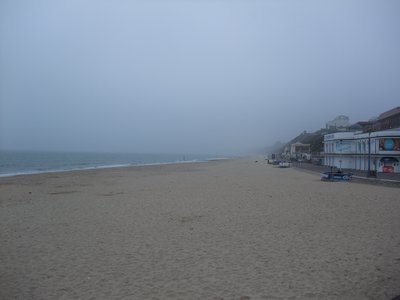 and about a million bars, cafes and restaurants (but it has always been a watering place - that is how Galsworthy described it more than 100 years ago in The Forsyte Saga). It took a while for me to find a place that appealed, most were empty and silent with waiters who would look at me anxiously as I went past willing me to go in. I was about to resign myself to fish and chips when I came across a very cheerful Mexican place, called Coriander, one which went well beyond the normal tacos and burritoes - I had something described as a "Mexican casserole of Chicken, in a spicy tomato and vegetable sauce, with crispy potatoes & melted cheese" and very nice it was too.

Reading this week was Aldous Huxley's Brave New World. The things I was most fascinated with, he spent least time on, such as the drive to keep consuming in order to keep the wheels of capitalism running (although there was a lot of detail about the production of the various classes of people). The moral standards were inverted; girls who went with the same guy for more than a week were perverse; promiscuity was to be congratulated. One thing that has stuck in my mind is the one accolade given by the guys to the girls - they are said to be pneumatic (this had interesting resonances given the pneumatic pants described in Antic Hay and that the best sofas are those which are pneumatic).

Posted by NZBarry 17:21 Archived in England