By way of posting about current travels for a moment, today I left Birmingham for the last time. It was quite a journey: 4 different trains and 11 hours between quitting my home in Lichfield and arrival, but I am back in Whitby. This is one amazing spot, possibly the best in all my travels (but there have been so many great places, it is hard to say). It is the kind of place to which I would make a beeline if I was to win LOTTO or find out that my father was actually Bill Gates or otherwise come into sufficient money to retire. I have just sat in the Board Inn, which overlooks the mouth of the River Esk, and watched the light fade from the day, Captain Cook in stark silhouette observing from the opposite bank. I don’t think I have seen a more beautiful thing. Then, the light gone, I climbed the 199 steps up to my hostel among the ruins of the ancient Abbey. Who could ask for more?

I should perhaps mention as a warning that there is full frontal nudity at the bottom of this post, so go there now or stop when I say.

When I last posted, I was speaking of Helsinki. I think the one thing that lingers in my memory apart from what I have already mentioned is the buskers I encountered on my Easter Sunday walk through the near deserted city. They were not your ordinary class of buskers: one was playing the double bass, another a couple of blocks along had a clarinet and the last had an instrument I do not know the name of. It was the size of a largish zylophone, and sounded like a zylophone but with extra features, as if combined with a small pipe organ. The pipes were to the front, and by hitting a key with his plonker, the musician would make them sound.

But I was only in Helsinki until early on Easter Monday. I caught the ferry back to Tallinn, had a last look at and coffee in my favourite bookshop and caught the train south. Although brightly coloured, that did not hide its Soviet origins and the interior accommodations were decidedly Spartan 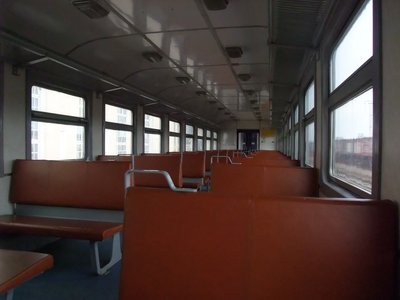 The journey down was uneventful and unspectacular, trundling through a nondescript forested region for most of the way, broken only by the occasional factory around which a town clustered. I began to doubt my destination, which was driven by the fact that it is not possible to travel from Tallinn to Riga in one day unless one has an early start. When early came around I, of course, was in Finland. So I took some advice and people said that rather than stay in the border town of Valga, I should only go as far as Tartu. They were right.

Once again, I fell in love with a place. Tartu was also a Hanseatic town, important because it is on a river connecting two lakes, one of which borders Russia. There were several hundred barges in use, ferrying goods backwards and forwards. Sadly, they fell into disuse around the end of World War 1, and then the timbers were found to be important for other purposes and not even one survives. The extraordinary thing is that in the last few years, a group of people in Tartu has, working from old photos and descriptions and learning all the skills necessary, first made the tools necessary to hand build one of these barges and then they built one. 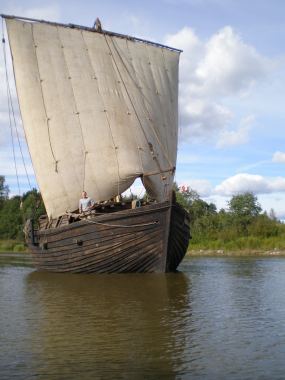 It was out when I went to look at it, but the photos show it to be more of a small sailing ship than what I would call a barge. The same group is presently getting ready to make a Viking ship. They also throw quite a Christmas party: a fellow in the hostel told me of going and getting fairly sizzled, then having to spend time in the sauna prior to a refreshing dip in the river. Not so bad, perhaps, until you know the river was frozen solid and the dip was by way of a hole cut in the ice.

As for Tartu, unlike Tallinn it has not undergone all sorts of upheavals and transformations and so it is a place of quite startling formal beauty. A key place is the University, which has been around since the early 17th century after establishment by the Swedes. There was a bit of a gap during the 18th century and it was re-established in its present buildings very early in the 1800’s, becoming very important in scientific and philosophic thinking. 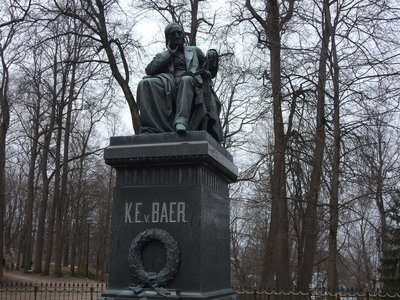 helped – he founded “descriptive and comparative embryology” (no, I don’t know either).
So, the University is probably the most beautiful of the buildings in Tartu 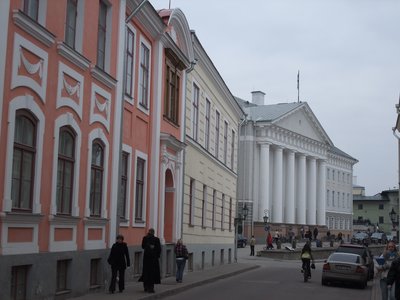 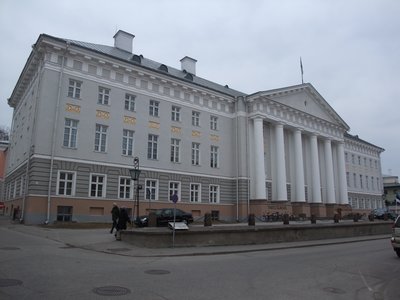 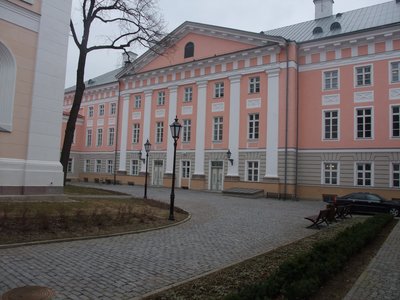 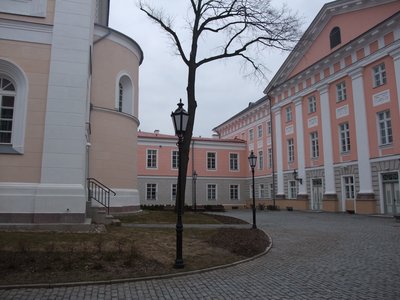 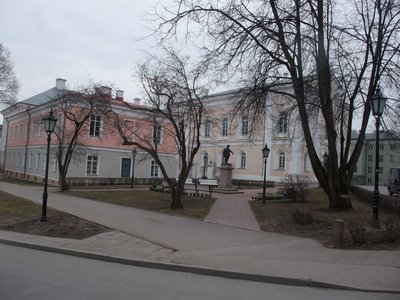 I had lunch in the main canteen, which is in this building 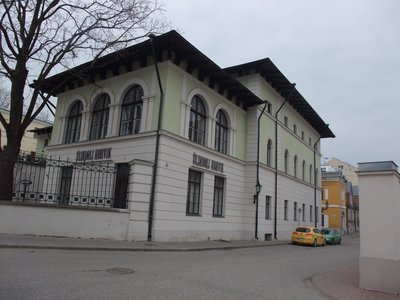 and has pieces like this inset into its walls 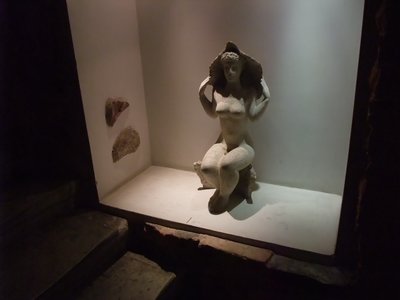 Behind is the city park, which I liked because it was a bit rugged and had a touch of the wild about it and it had a ruined Abbey 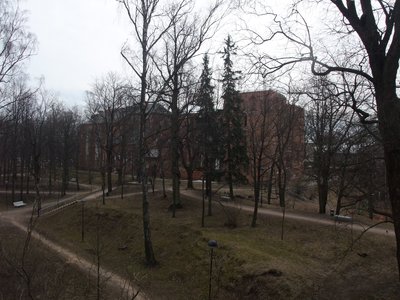 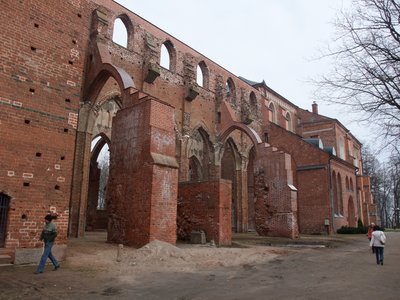 although to be fair, it could only be said to be half ruined as one end is still in use as a museum 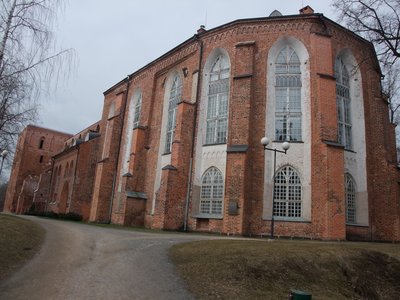 One thing that really features in Tartu is its street art (the third one down does feature complete nudity). The first I really paid attention to was this conversation outside the Wilde Hotel 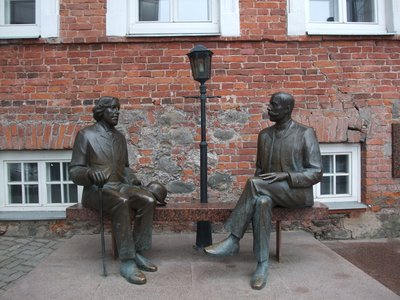 One is indeed Oscar, but the city is honouring the other, a fellow called Eduard Wilde. You have to like a place that has this outside its town hall, simply known as Two Students Kissing 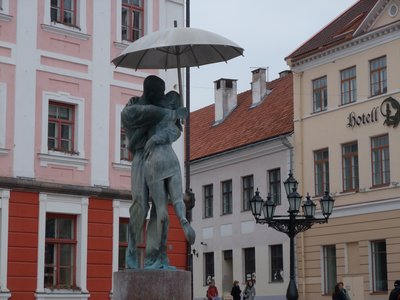 But there is one piece which I walked past without really paying attention, and when I did I was slightly disturbed, not because they’re nude or right in the middle of the central square, but because this is a father and son, and the son is said to be a mere 18 months old! 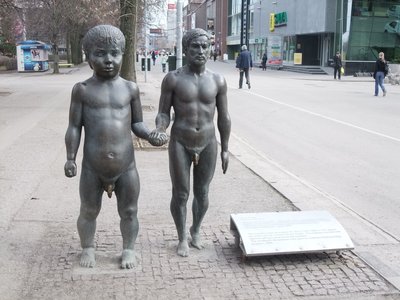 Posted by NZBarry 15:52 Archived in Estonia