I didn’t quite say all I wanted to about Tartu. My first night there, the fellows running my hostel recommended I dine at an establishment called Crepp, just down the main street. After walking the length of the street to conduct an exhaustive comparative study of all the menus on offer, and popping into a pub for a pint to process all my research, I had to agree: I found myself salivating over the idea of some fancy steak dish the menu attached to the outside promised. So it was a little disconcerting to go into Crepp and find that the menu I’d seen was for their upstairs restaurant, which was not open. I was instead in their salad restaurant. I decided I would make the best of a bad situation by ordering the meatiest looking salad on offer, a meatball salad. I have to say that the salad itself was quite delicious, but the meatballs were little larger than peas. Feeling cheated, I slunk home.

I did far better the next night, at a place called Truffe, one of these buildings (apparently they lost some in the War and had them replaced by Stalinist neoclassical buildings, but I can’t tell which are the old and which the new): 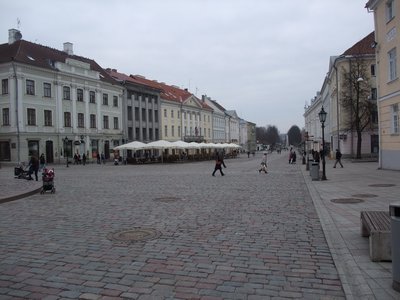 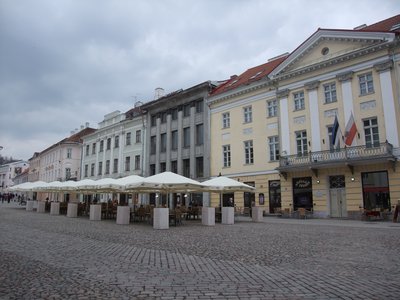 Quite apart from a lovely dinner, I found myself mesmerised by some of the music playing. I have no idea what language the particular songs I really liked were being sung in, it may have been Estonian but they were also playing English and French sons so I can’t be sure. Nonetheless I told myself it was Estonian triphop.

I have a couple of other buildings that caught my eye. These wooden ones stood out as being a bit of a contrast to the prevailing mode 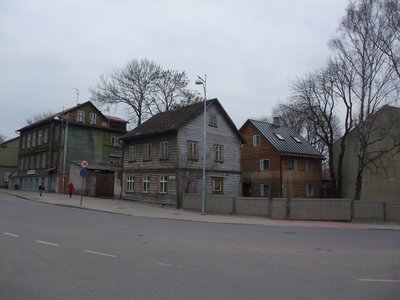 and then there was the Art Gallery (behind which was the Tartu Public Library, in which I ensconced myself for several hours work) 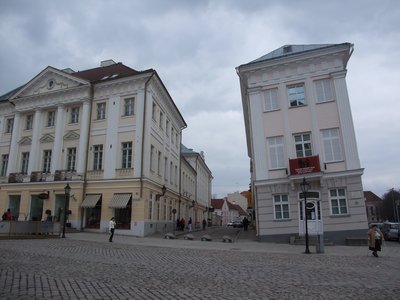 In my quest to find the Tartu Barge, I had quite a wander along the river 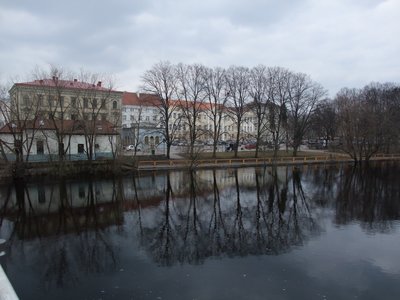 it was very peaceful 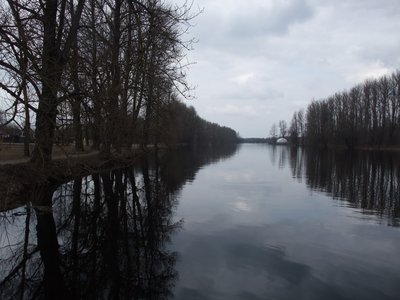 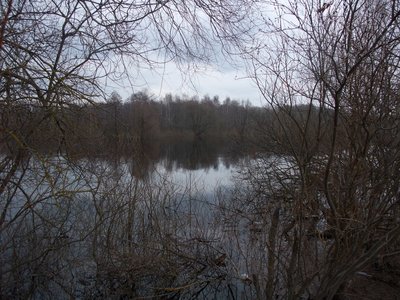 and I almost forgot that I was within a half hour’s walk of the city (although the three playground were a reminder). The river itself was not behaving very well 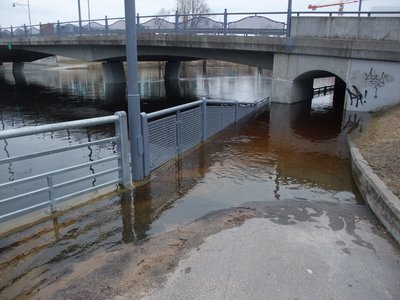 One other joy of Tartu is that they had a brand new bookshop, a branch of the one I liked in Tallinn, so I was in and out a few times for coffee and to enjoy 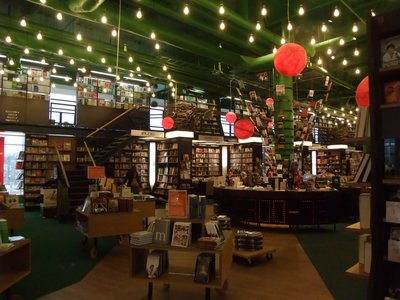 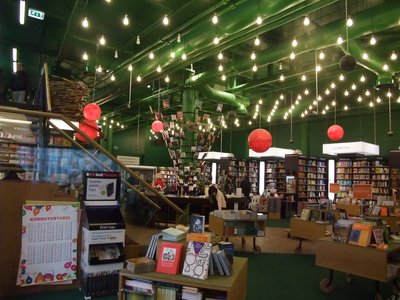 I stayed in a hostel which was basically just an apartment in a typical apartment building, the thing that made it special was the three guys running it. They seemed to be having a great time, kind of like college room-mates (they were American, Australian and English) and running the hostel as an extension of their home, which made for a very comfortable space. One fellow visitor had arrived a couple of weeks earlier for a two day stay, and was extending it day by day.

My hostel in Riga was a far more hostel like place, although a very very good one (except for the six flights of stairs) – a ten room communal apartment converted a year ago with a clear sense of style, (when I got back to England, I read a bit of a rave about it in the Guardian), lots of black, white and red 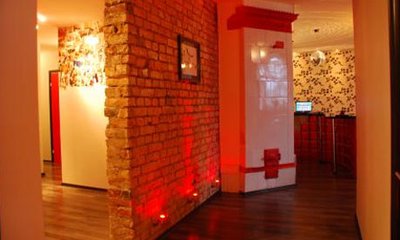 The building itself is an example of Art Nouveau, a movement which started around 1897 – apparently Riga has the greatest collection in the world 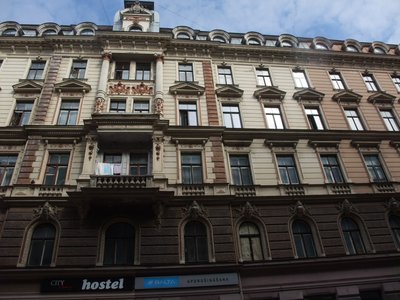 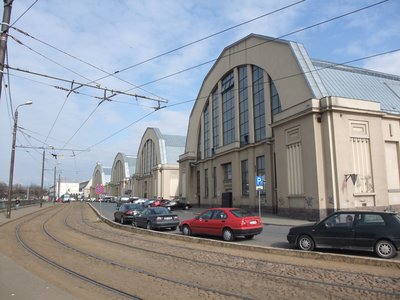 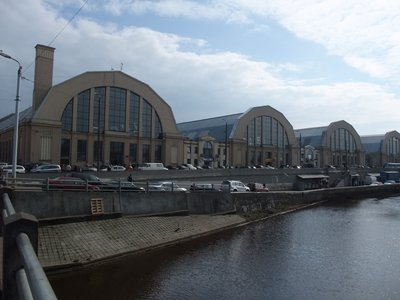 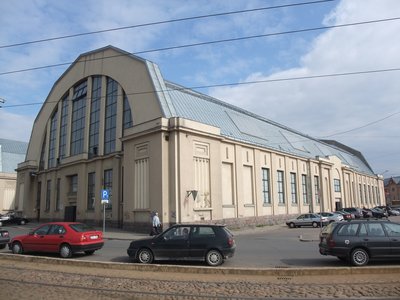 During the war they were used as Zeppelin hangars, but have been returned to use as a market 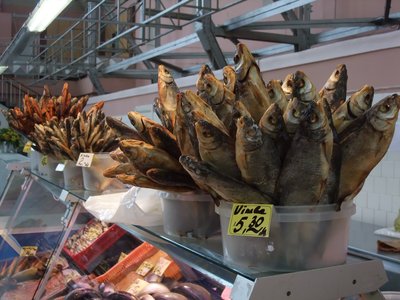 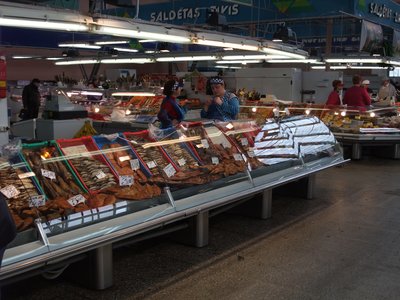 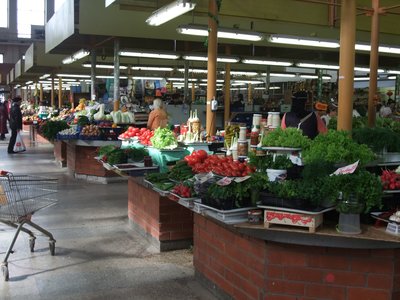 with a few flowers for sale outside 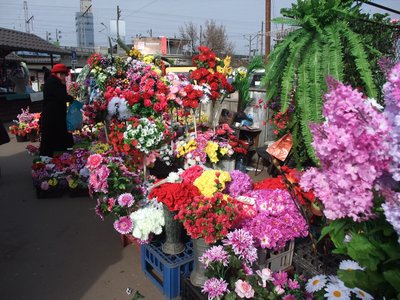 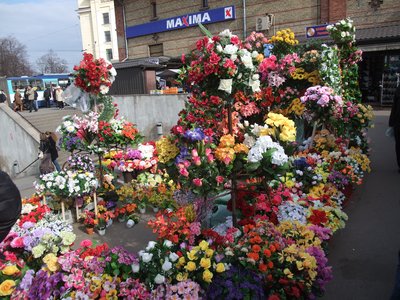 Here is where I sequestered myself to do a couple of days work, in the Riga Graduate School of Law library, two glorious examples of Art Nouveau 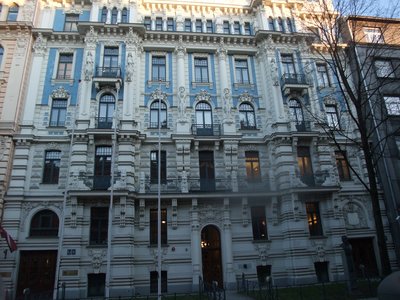 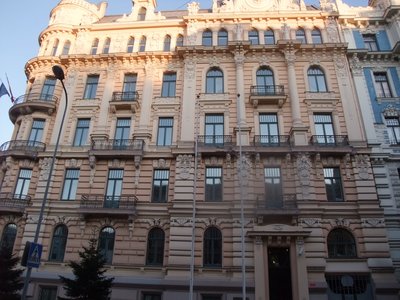 (sorry about the infection my photos seem to have caught).

As I hit Riga, I finally finished the first volume (of three) of The Forsyte Saga. Soames Forsyte started out as rather a horrible man, but he found his humanity when he had a daughter, and really does lover her unconditionally. There is this whole feud going on because Soames and Irene split, and she married Jolyon and had a son. So these is hell to pay when her son (another Jolyon) and his daughter (Fleur) meet and fall in love - they have no idea of the old history. Soames is able to get over it, though: if Felur really wants to marry Jon (as he's known) he will accept it. This, combined with his outstanding probity as a lawyer makes him end the book as its hero, rather than the villain.

Posted by NZBarry 15:57 Archived in Estonia