And Back to London (Again)

As I post this, I have reached that point in my journey when it is time to quit England. I am currently in Carlisle, so the easiest way to quit England would be to go the few miles north to Sotland, but that is not the way I go. No, tomorrow, I will be back in Wales.

My first night in the hostel in Riga, my room mate, a musician from France, suggested I go round the corner to a restaurant called the Lido - a place I had seen advertised and thought would be awful, but I let myself be persuaded. It was kind of awful, a buffet set in an extremely fake medievally themed room, with an old lady comatose in the window (I happened to walk past three times during my stay and she was always there, although not always comatose, otherwise I might have thought her a mannequin). Worst of all was the drink I bought, thinking kwass might be a local brew of beer. Apparently it is a very popular Russian drink, essentially a fermented malt drink - the recipe I saw online would have me add (to about two gallons of water) a single large raisin for flavour. I guess making it a large one makes all the difference.

In my wanders over the three days, I saw a lot to appeal. Oddly enough, the Old City was OK, but it was the newer part, the hundred year old Art Nouveau areas that really appealed. Here are some more or less random buildings that caught my eye: 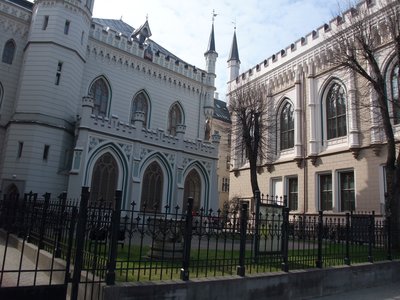 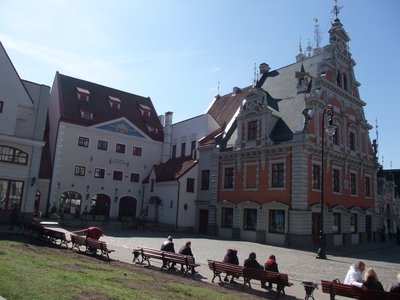 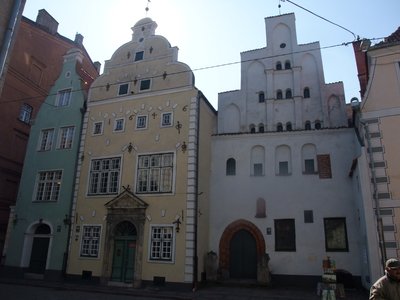 These are known as the Three Brothers, some of the oldest standing buildings in twon, from the days of the Hanseatic League. I was sure that this building was some sort of church, but it turned out to be an academy. 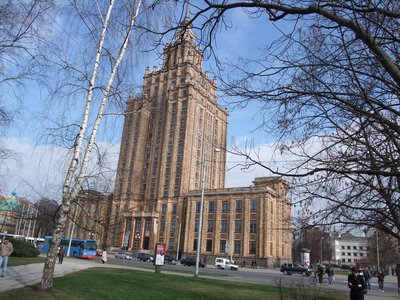 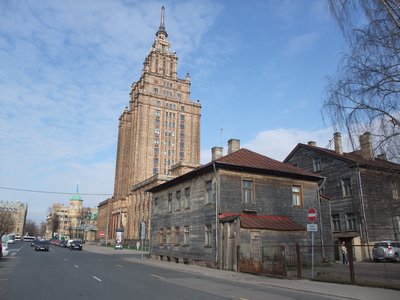 Some I really did not like, mainly because they were out of place. This is a museum, in the Old City 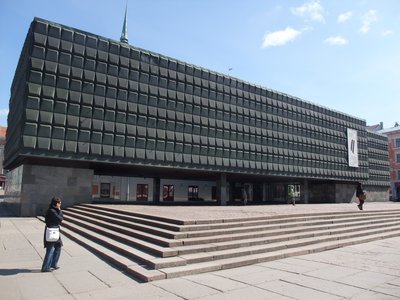 and this is a bar 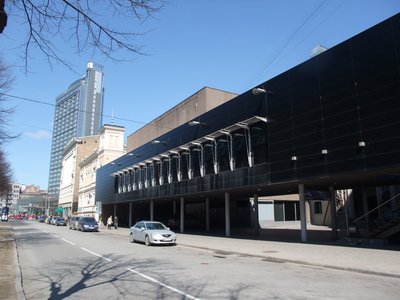 But it was the Art Nouveau style that really got to me: some streets were entirely given over to it, and the thing that impressed me was that no matter how impressive the individual detail one building might have, the next would be entirely different. I did go to the Riga Museum or Architecture to find out more about it, a place which claims to have 7000 exhbits. All I know, I went in and all they had to show me was a big banner, leant not a damn thing. But I was in the hostel talking with a couple of the guys, and we decided that the aesthetics of the buildings have so much in establishing the tone of Riga as a very relaxing place to be, and contribute to one's own sense of well being. So it is little wonder I spent most of my non-working time just wandering slowly around. 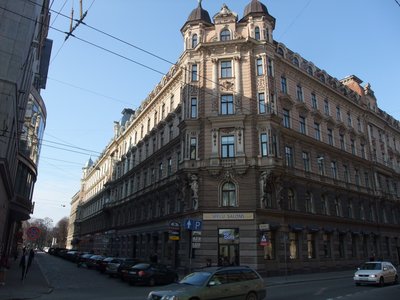 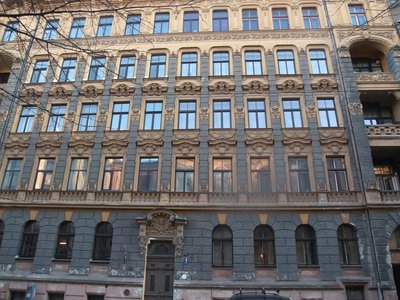 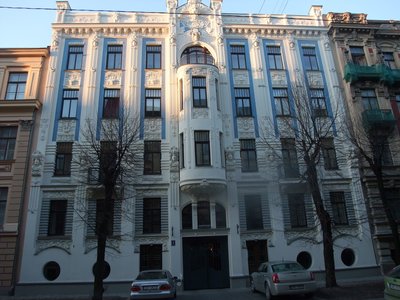 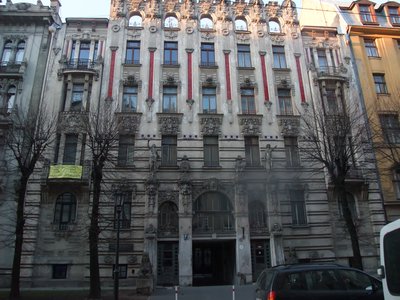 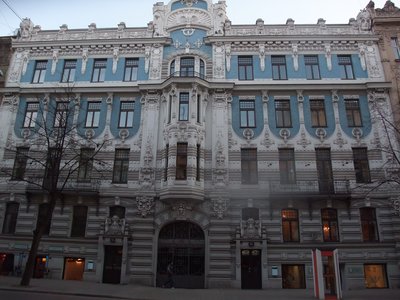 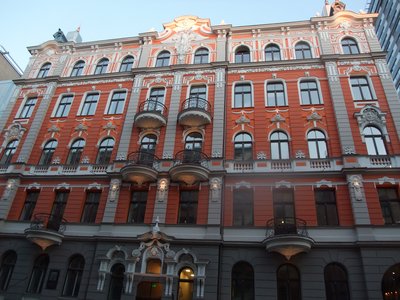 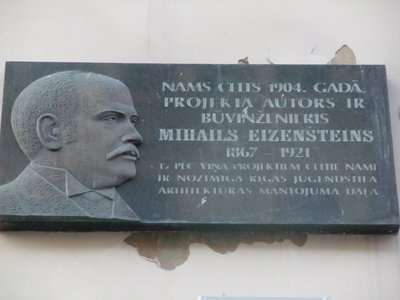 As for reading, I decided to take a break between volumes of The Forsyte Saga, and went for last year's Man Booker Prize winner, Aravind Adiga's The White Tiger. It started off well enough - a fairly presumptuous letter to the Chinese Premier to clue him in to the current state of India. After a while, the narrative dropped back to simply telling the life story of the White Tiger, Balram. He had humble origins but somehow got the determnation to get ahead, and with India the outsourcing capital of the world, there are opportunities for those willing to do what is ncessary to grab them (in Balram's case, it is revealed very early in the novel that what it takes is to kill someone). A couple of people on the bus out to Riga airport noticed me carrying it and did a bit of a rave about it, but I wasn't left overwhelmed - it is a bit slight, a bit Slumdog Millionaire, a bit Nabokov lite.

The Baltic Air flight to London was straightforward. I have to confess to a minor error on my part in making the booking - I had found a decent enough price on a flight discounting site, but thought I'd check out the airline's own site. The price there was expressed in Ltvian Lats which, when I looked up the exchange rate was something like three to a pound. That made the flight a bargain, so I was happy to add extras, spending up large on the website to get myself a pork steak lunch wine, etc. I felt a bit sick, however, when I realised I was using the conversion rate for the Lithuanian currency - 1 Latvian Lat is actually about 1.3 pound, making everything just a tad expensive.

Arrival back in London was a bit of a slap in the face. Eastern Europe is so peaceful and quiet, and the people for the most part seemed pretty cool. But getting on to the train to London soon dispelled the sense of peace acquired. Someone was wrenching the table on the back of my seat, up and downm up and down... and it was making a horrible screeching sound. I thought it might be a young kid doing it, and that the parent might ask whoever it was to stop but no, this went on for a long time. But when I finally lost it and asked that she stop, the perpetrator was a teenager. All my request that she stop produced was her smiling at me, redoubling her efforts and she and her mates mimicing my accent among themselves. Luckily for my sanity they all got off at the next stop.

Posted by NZBarry 16:10 Archived in Latvia