After coming back from Latvia, the feeling of everything being about to end was strong, so I thought I’d have a final weekend in London, staying at the newly re-opened (“last Wednesday, Sir”) St Pancras YHA. Also newly re-opened is St Pancras station, which is a star among railway stations (sorry about the fogging on the photos). 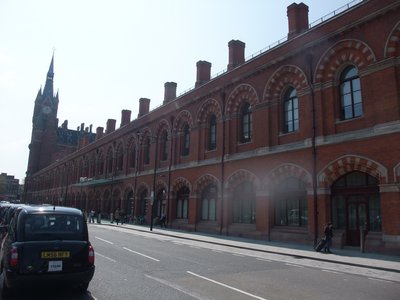 I planned to get a photo of its impressive front, but somehow forgot. There are several storeys facing the road in a kind of red brick gothic style, I don’t know what all the space was used for, but had the impression that it was barely used at all so am glad to see that it is getting new life as a hotel and apartments. Inside, there has been a massive redevelopment. Trains are on the upper level 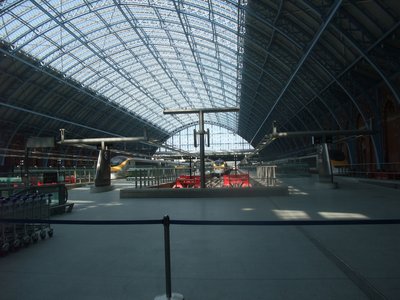 along with a statue of John Betjeman 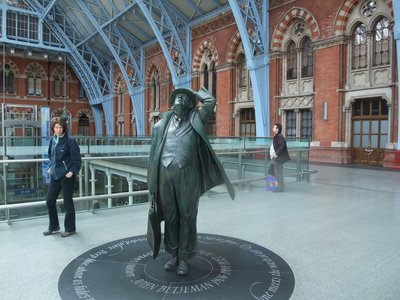 and a couple, obviously just re-uinited or about to separate for a journey 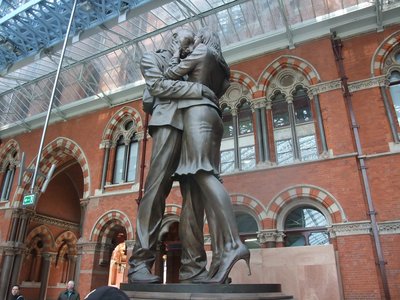 Downstairs there was enough to amuse me for my entire visit to London, a branch of Foyles, lots of cafes and various interesting shops. 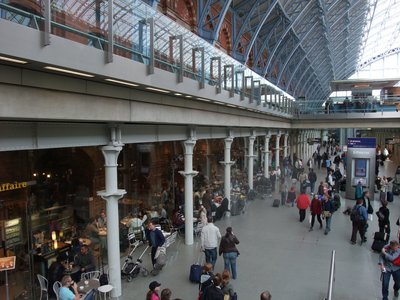 I didn’t actually stay in a railway station for two days, however, I had films to see. First was the Swedish Let the Right One In, about a 12 year old boy who is a bit of a loner, picked on by the other boys, but then he makes this friend, when a new girl moves in next door. So, at one level it is a sweet movie about two outsiders finding each other and forming a bond, but the wrinkle is that she’s a vampire. Such is the sacrifice that her dad will make that he goes out and kills for her. The oddity of this as a vampire movie is that the audience is left empathising with the vampire.

On the Sunday, I had a fairly hefty walk as I planned to see Camden Market. On the way, I found St Pancras Old Church 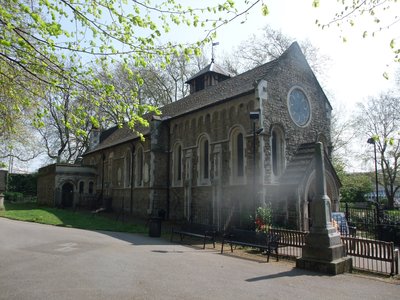 which has been here since the 11th century, although it has had a bit of refurbishment along the way. There’s a cute story about burying all of the Church’s treasures so that Cromwell’s men wouldn’t steal them, but then not being able to find them again. It was only when the church was being rebuilt in the 19th century that they were found. Mary Wollenscroft is apparently buried in the graveyard, but I never found her grave. This 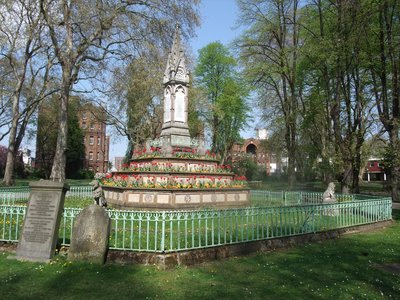 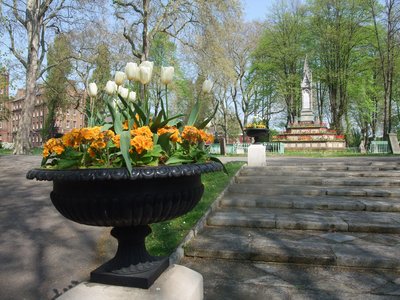 is a sundial which one Baroness Burdett-Coutts saw fit to give to the public (she was heavily involved in slum clearance in London (which has curious links to my reading in The Forsyte Saga), the first woman peer).

I’d heard that Camden Market had burnt down, but that was a bit of an exaggeration: much of it was still going strong, 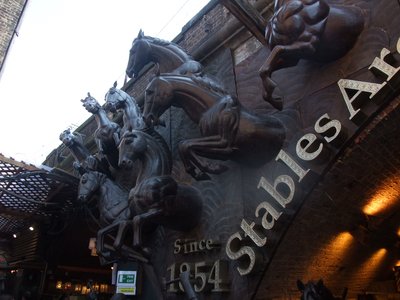 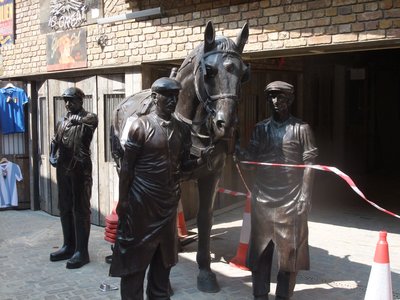 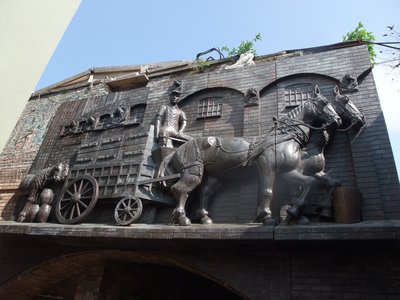 completely crowded and still selling much the same sort of stuff it has always sold, 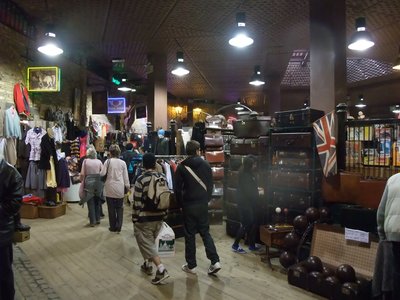 even though they have become mainstream in the meantime, such as Doc Martens. Even the street outside was chocker 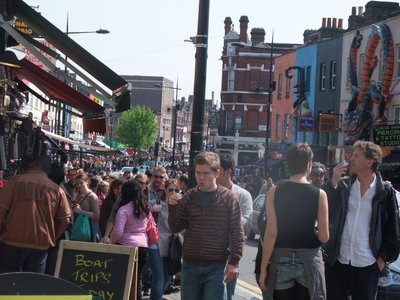 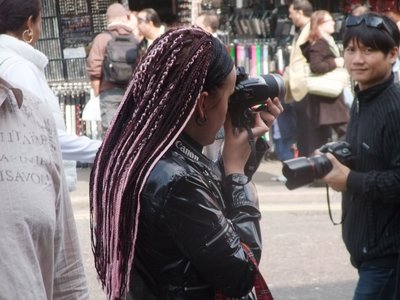 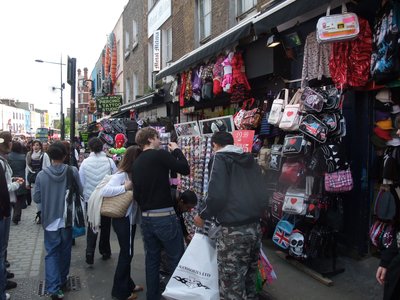 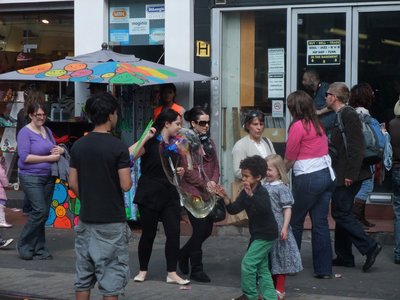 It was nice to see that there were still some freaks among the civilians, young and not so young. 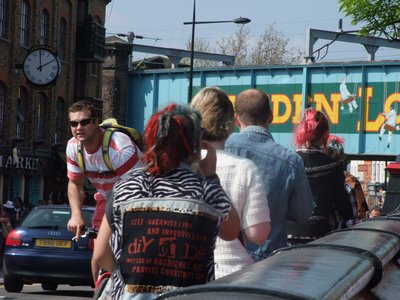 Down in Camden Lock, someone was actually using the canal 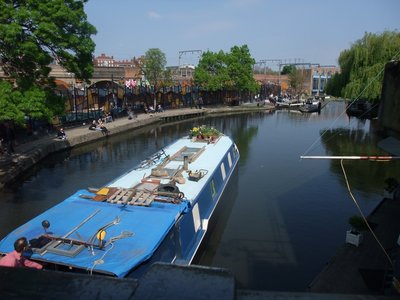 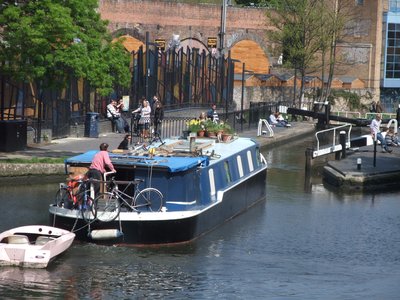 It was then a fairly long walk along to the top of Upper Street in Islington, and an unfortunately rushed walk down that street – so many interesting looking cafes, but I had no time to longer, as I was headed for the brutalist splendour of the Barbican 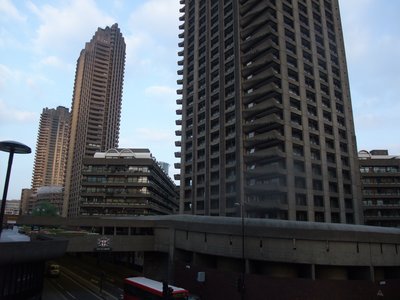 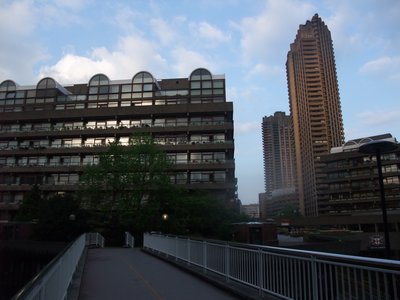 to see another film, 400 Blows, one of Truffaut’s early movies and said to be one of the defining moments of the French New Wave. I’ve seen a few movies from that movement that have left me completely bewildered, not as to what was going on but why they made it into a movie, but this one I enjoyed. Antoine is a troubled school boy, where he has a hard time behaving and is given progressively worse punishments. He kind of brings things upon himself: when asked why he was not at school and has no note, his answer is that his parents both died. Not sure how long he thought he’d get way with it but it wasn’t long. Home life isn’t much better – he has to sleep in a cot in the kitchen, and there doesn’t seem to be much of a relationship either with or between his parents. There is an almost farcical scene when, to get some money, he and his mate steal a typewriter (of all things) from his father’s work but are caught when trying to return it. This is the final straw, the cops get called in and it is off to borstal, on his mum’s recommendation. This suits him, in that he’d always wanted to be by the sea.

Posted by NZBarry 08:33 Archived in England