Yes, this was another fit of indecision which captured me: I couldn’t decide between Whitby or Tenby, so decided upon both. I certainly made the right decision going back to Whitby for a few days, although it would have been a giggle to have been there the weekend before. Instead of steam trains, it was goth time – one of the two annual Gothic weekends, and the local paper was full of images. I feel a particular sense of loss for not seeing the Dracula Drop bungee jump or the football match in which Real Goth took on a local team. I wonder if any turned out wearing kit like this 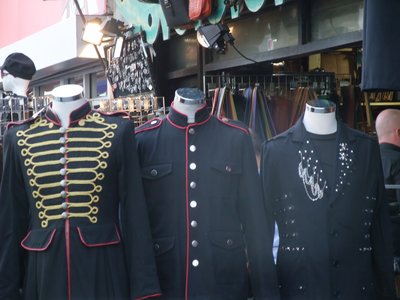 But before Tenby, I had a wee bit of tripping about to do. First, I had a couple of nights back in York, where I was disgusted to find that among the hundreds of bikes at the station, mine had been picked upon to be stolen. It only cost £25 and was nothing special, so why it would be taken I have no idea. It would have been very helpful to me, as I had quite a trudge to the hostel, and I’d perfected the art of making the bike carry the heaviest bag. Since that was the end of that, I thought I might as well confuse someone by tying my helmet to their bike.

This time in York, I did get to see inside the Minster, but didn’t really do much else. The hostel was good to work in during the day and, in the evening, well another retired bloke had struck up a conversation with me within about a minute of getting into my room. He too had been to New Zealand, even bought a bike with big ideas about cycling the length of it, but didn’t get far – the bus was much less tiring. Poor fellow, he was made redundant, his age made it hard to get more work, then the recession cut in to make it impossible. We went off to a really nice cafe, Concerto, opposite the Minster – it had music scores in place of wallpaper and a really friendly vibe – and took a couple of pints before tackling the walk back. The next night, we didn’t even get to leave the hostel, just spent the evening in the hostel bar, with our young German room mate and a New Zealander, doing a bit of travelling before going back to her accountancy firm. I’m fairly sure she’s the first Kiwi I’ve talked to since I left home – the funny thing is, she didn’t recognise my accent. After my rant about teacakes, she probably wishes she’d stayed in her corner. Or maybe I converted another to the cause.

Now, the logical way to get from York to West Wales is to go back through Birmingham, not via the Scottish Borders. But I’d heard so much about the Settle to Carlisle railway as being the most spectacular rail journey in the UK that I had to try it out for myself. Of course, back in York railway station, I found that my bike hadn’t been stolen after all, so it could come for the ride.

We didn’t get far. After a change of trains in Leeds, a very interesting looking city, lots of very new flash buildings among the older, more sedate brick edifices, we got stopped at a station just south of Settle. A freight train had broken down ahead of us – normally that would not be a problem as there are two lines, but this one had chosen to break down on the Ribble Viaduct, where the railway was reduced to a single track, and there were problems extracting it.

So, I got to Heilliford Station before 11:00 and was there for a while. Luckily it was a nice station and had an alarmingly cheap cafe – after I’d loaded up with a quota of crisps and Mars Bars and homemade ginger cookies and a cup of tea, I had to question whether he had his pricing right. 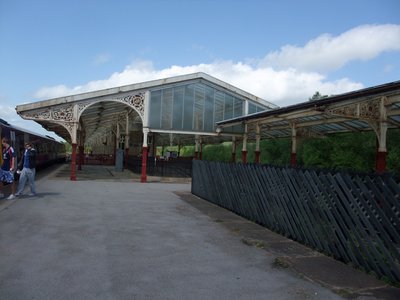 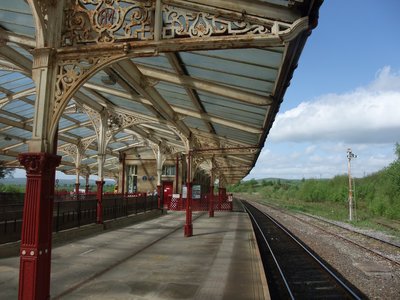 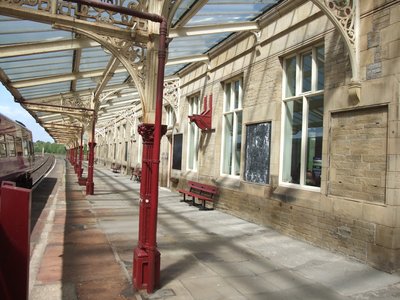 They did put on a bus, but the only reason for going to Carlisle was to do the train trip, so I was determined to wait it out. I had a fellow to talk with, a local who turned out to be a retired Crown Court Judge (and to continue with the theme of retired gentlemen who went to New Zealand when he was young, he was another). He was just going “over the top” for a day trip, but by early afternoon he gave up. A train did come along, that would take me to Carlisle via Lancaster, and the staff on my stuck train were quite definite that I should take it. Nope, no way, I’m doing the Settle Carlisle. It was just before 4:00 that the line cleared and the next train came along which could take me.

The journey? Kind of nice but the bleak experience I’d been promised 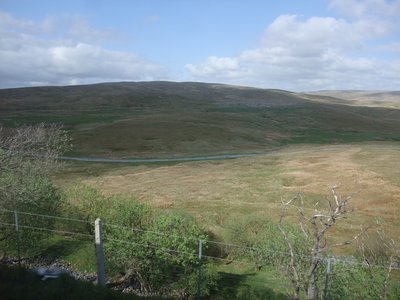 was over pretty quickly.

Didn’t help that Carlisle was not that great. I think the best thing about it was my dinner – walking around, one place was much busier than anywhere else, so I went in despite it being a Chinese eat all you can Buffet (traditionally not very good food) and it was great. Swansea the next night wasn’t much better, lots of people there for stag and hen nights and generally getting drunk, but I’d had to stop there because of the wacky world of Waterstones. You can go into their shop and buy books, or you can order online, which saves you heaps. Then you can ask that they deliver to your local Waterstones, which they’ll do for free. Since Swansea was the only place I was passing through that had one, and I was curious to see if it is as dour a place as the guide book says (it is), and I found a cheap night in a Travelodge it all added up.

All in all, I was getting a little apprehensive, maybe I’m getting over this travel lark and won’t enjoy Tenby? I needn’t have worried – even the little train that bumbled its way between the bushes to get me from Swansea to Tenby cheered me, particularly the very proper speaking English fellow with a very long white philospher's beard who turned out to be the train driver.

And in Tenby, I had a great week. I had an apartment, which gives a bit of the view of the sea 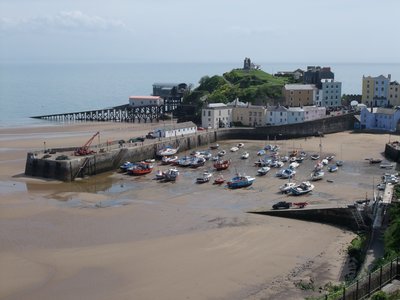 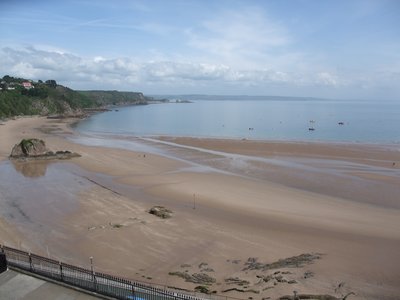 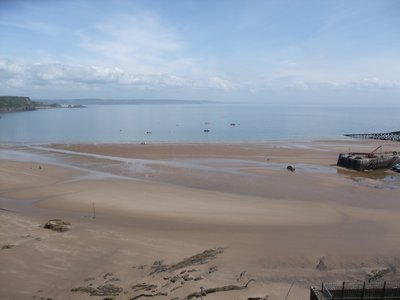 Yep, these are all from the window of my apartment. From the outside, it was nothing, a grey concrete wall above a shop selling touristy kitsch, but inside it had all I needed, even a bath. Not having to work within the routines of a hostel or hotel or flatmates was wonderful – a week of getting up around 11:00, working through until 2:00, when I’d spend a couple of hours in a cafe for a sausage baguette (much better than it sounds) and apple pie, catch up on the internet and go for a bit of a wander. 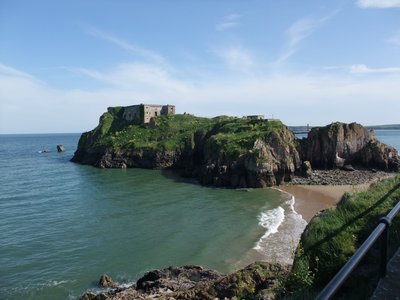 It was nice for the fellow in the cafe to decide I was a writer, which I guess is what I am at the moment. Then it would be a few hours work in the afternoon, then dinner at a pub and another wander, before working through until about two. The changing mood of the sea was a constant entertainment 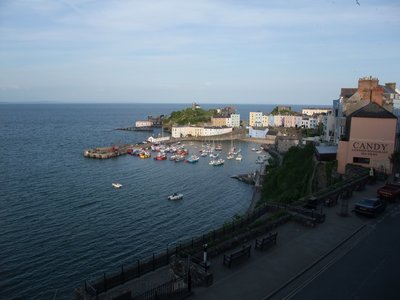 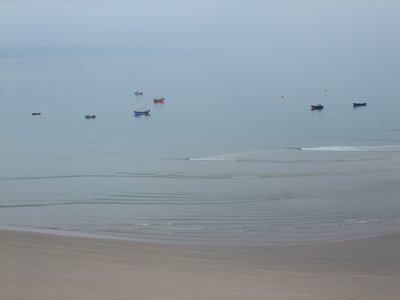 The TV mumbled away in the background, so I became heartily sick of the MP expenses row, but it was interesting to spend 10 minutes listening to what they’re debating in the House of Lords – the fact that the bacon in their restaurant is from Holland, not Britain – because British bacon is £6.59 a kilogram and the Dutch is £4.80 and “we like to give value for money”. They even tell jokes in the House of Lords” “I had this friend, he came back from Mexico, and I was worried because he didn’t seem very well, thought he might have swine flue. So, I rang the swine flu hotline but, instead of help, all I got was crackling.”

I may as well write it here – I had a particularly geekily spooky experience during this week. I got this thought in my head on the Sunday night, that if I was to buy land and build a caravan on it, like the static caravans they have here which have wheels but never go anywhere, then it wouldn’t be a building so I wouldn’t need a building permit. All sorts of images of what sort of thing I could build and it not be a building were in my mind. That kind of passed, but then a few days later I read something – at almost the precise time I was having visions of buildings that aren’t buildings, the High Court back in New Zealand was convicting a fellow for constructing non-mobile caravans in his caravan park without a building permit.

I think that I was right to be confused about whether Tenby or Whitby is better, because they both suit me so well. The town of Tenby might have a little less to enjoy than the town of Whitby, certainly has nowhere of the stature of Beckett’s, but the beach that circles around Tenby is definitely superior.

In between my doses of The Forsyte Saga, I have been reading a more contemporary novel. Over the course of nearly a fortnight, I only managed the one - Victor Pelevin's Babylon, set in Yeltsin's Russia, after a fashion. Another name for Babylon is Babel, which has certain connotations important to understanding this book. Its central character is a fellow often simply called Baby, who is an adertising copywriter who spends most of his money on drugs, and he takes some wild trips as a result, imagining himself in a ziggurat communing with its priest or having a long argument with his ex-boss, only to find it was a fence post. The middle class is somewhat different to Addison & Steel's, or even Galsworthy's - here, they're thugs in armour plated cars with heavy automatic weapons and have bodyguards.

Towards the centre of the book is this sort of funny episode, although it was incredibly dull to actually read, like a lot of critical theory. Baby has himself an ouija board, and wants the spirit of Che Guevara, which he gets. But Che gives him a multi page account of marketing theory, based on the premise that we don't watch TV, we are controlled by it. And TV certainly has a huge role in this novel. I'm tempted to say just how huge, because I did enjoy the premise, but I have been warned off by the Guardian review: Baby is "initiated into a huge politico-cultural conspiracy - but it is so delightfully realised that to reveal it would be an act of gibbering critical sabotage".

Posted by NZBarry 16:07 Archived in Wales