Creeping Down the Irish East Coast

It has been a while - I was in Dublin, with a plan to update, but the internet was so slow, every photo I tried to upload just died on the vine. I'm now in Philadelphia and the internet is very fast.

That wild sea I was watching at Manorbier? Still a bit wild when I had to cross it from Fishguard to Rosslare. The ferry heaved considerably and I was less than comfortable with the movement. In a brilliant stroke of Swedish design, the ferry was equipped with swivel chairs, nicely spaced to provide the tables with an almighty thump every time we hit a wave.

I’m afraid that reportage from Ireland is a little limited. This is not because there is nothing to see, but work has tended to get in the way of my explorations. As a fellow in the hostel in Fishguard said, its a terrible thing to do when you’re travelling. He did accept my point that the travel makes the work go easier.

When I was in Ireland twenty years ago, I found it to be completely enchanting. Mind you I was a bit closer to the ground. After flying in to Belfast and getting up to the Giant’s Causeway, I hitched the rest of the way, travelling with farmers, priests, prison warders, tradesmen, accountants, a friend from my first year at university, you name it. This time, I don’t think I’ve seen anyone hitching. I’ve had to have recourse to buses again, as the train system has not really catered to my plans. The only train running south from Rosslare was at 7:13 in the morning, and from the south to get over to the West Coast seems to involve many changes or going via Dublin whereas the buses are frequent, direct and cheap.

First stop was Waterford. What a grim place. Of everywhere I have been, this is the most savaged, or maybe it is ravaged, by the economic crisis. Two big new buildings standing completely empty, a big hole in the ground where another was planned, and many vacant buildings in the centre of town tell the story. I just got a bad feeling about the place, and found nothing I liked except for this 800 year old tower 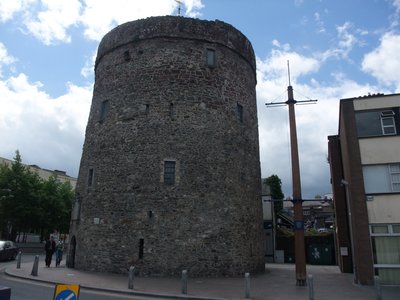 and Scholars bookshop. And then there was the food – even a sandwich seemed to be 8 euros. I did go into a pub for lunch and hit the trifecta: surly service, bad food and expensive. The only thing good about it was that there was not much of it. I stayed in the Travelodge which is a bit south of town: after my first wander around, I wasn’t tempted to go back. Waterford made McDonalds look good - the food was plentiful and the staff cheerful.

The trip south to Cork was nice, with cool looking towns and pretty countryside. Cork itself was much better than Waterford, starting with the food – my first two meals were an extraordinarily good Moroccan lamb tagine and a wonderful spicy concoction of prawns and green beans. Plus the best coffee I’ve had in a long time, thanks to Cork Coffee Roasters. They’re the best in Ireland, at least according to the plaque leaning against the Probat sitting in the middle of the cafe. Various coffee related items adorn the wall, and the ceiling has this psychedelic floral wallpaper. I was in Cork for almost a week and this was a regular feature of my stay.

I wouldn’t say Cork had much of the spectacular about it, but it was comfortable and had a bit of a buzz, plus the various waterways were a nice feature to wander around. The University confused me, though: it seemed to be made of modern materials, but was built in an old style, including turrets.

I had another of those dilemmas while I was there, as I had a two day space for which I had no booking and couldn’t decide if I should go south to Kinsale or north to Ennis. Then I saw a poster saying Holly Golightly was coming to town and that clinched it: one night in Kinsale and back to Cork. Kinsale is a pretty harbour town just south of Cork 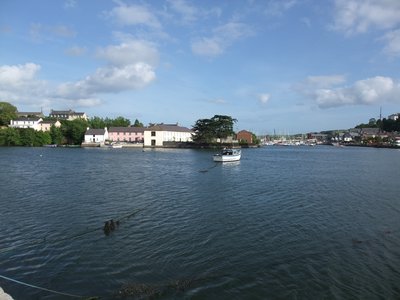 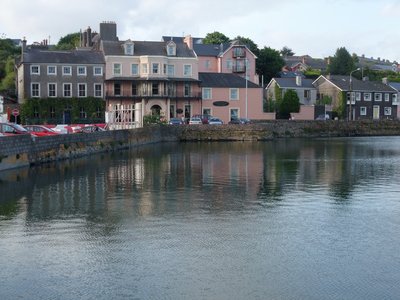 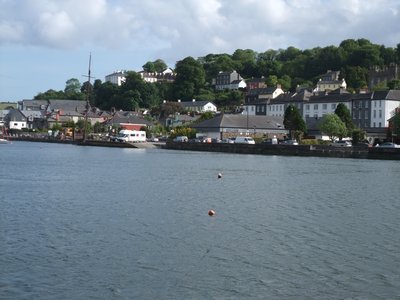 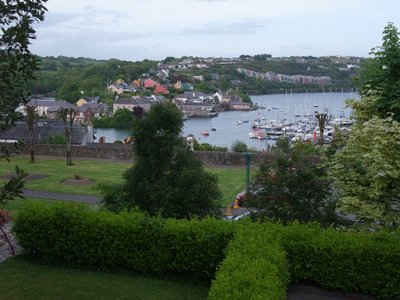 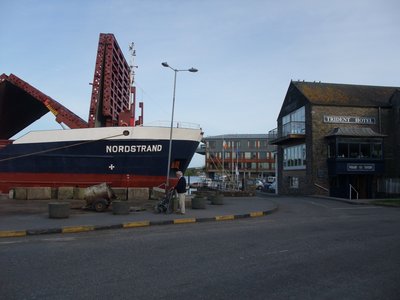 This ship was loaded old school style - a crane with a bucket emptying the contents of the vessel, looked like cement, into lorries. Not exactly a container port, but for some reason I found it curiously satisfying lounging about watching the boat being unloaded. 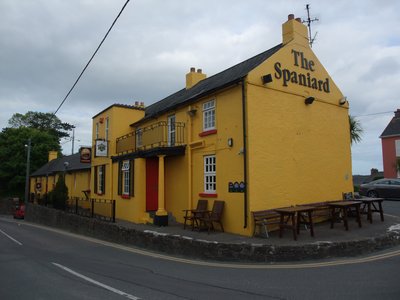 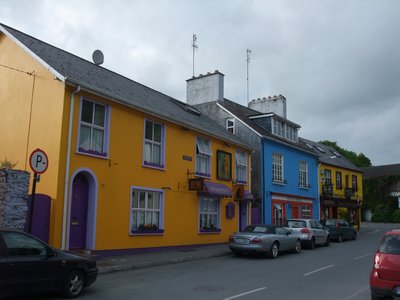 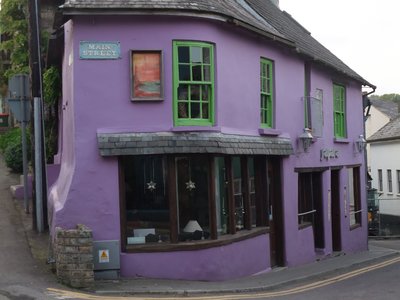 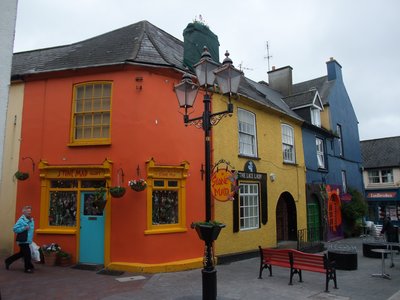 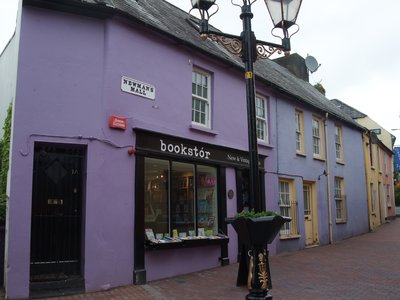 The first of these, the Spaniard's Inn, is about 400 years old, commemorating the joing of Irish and Spanish forces to fight off (unsuccessfully) the English. The people at the B & B I was staying in had commended it highly to me as a place to eat, but as no-one else there was, I didn't really feel in the mood. Besides, Kinsale is well known for its food, and has a number of acclaimed restaurants. Funny then that I shouldl end up eating fish and chips. Good ones, but, and from a proper restaurant. All in all, it was somehow well after 10 before I trudged back up the hill to the B & B.

Back in Cork, more great coffee, more fighting for space with school kids in the Cork public library, and then I checked into a real hotel, the Gresham Metropole. Nice. A few steps above the Travelodge, to be sure, and without costing the earth. I particularly enjoyed that the entire groiund floor was given over to lounging space.

In the evening, I crossed back over the river to see Holly Golightly and the Brokeoffs, who are actually just one person. 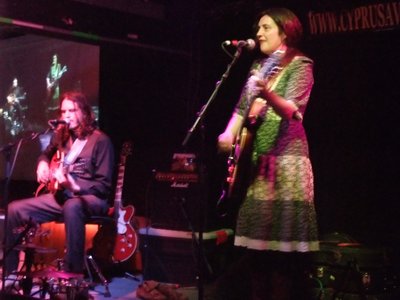 Sorry it is not the best photo ever. He's from Georga, she's very English but their music is old fashioned Americana with lots of jokes in-between. Surprisingly, only about 20 people turned out, but we managed to make a bit of noise to show we were glad they had come. After the gig, I was talking with Holly, wanting to know what would make her come to New Zealand, as I reckon we could produce a better turn out - even if she played the Penguin Club. The answer: someone with the money to underwrite her trip. Hmmmm. I know someone with money and a yearning to see Holly Golightly in New Zealand.

I read the last volume of The Forsyte Saga, and it is by far my favourite, although I laughed and cried my way through them all. Some of these three novels struck a very contemporary note, such as the people writing to the Times about Iraq, or worries about the rising unemployment and runs on banks, or that Westminster Abbey might be turned into apartments, or that England would be so much more well off if it didn’t import so much pork, poultry or potatoes.

The last 200 pages, I just read in one sitting, finishing about 3 in the morning and going off to bed, to dream I got married, to a girl I have never seen. Maybe it was Dinny Charwell, the central character in the volume, a woman of “pluck” and a “brick” – the highest of accolades. Each of the three novels in the last volume sees her family go through the mill. First, her brother is accused of letting down his team leader when on an expedition in Bolivia, and basically not playing the game. That’s almost worse than the fact he killed someone, because the fellow was “only a half caste” (yes, quite a lot of racial slurring seems to be part of being English in the late 1920’s) so, when the Bolivian’s want him extradited, his success depends upon which strings can be pulled.

Then it is Dinny’s turn. She has the misfortune to fall completely in love with one Wilfred Desert. He does with her, and all, but he is a man not completely sure of himself, so he cracks when it is revealed that out in the Sudan, when given the choice of recanting his Christianity and becoming a Moslem or being shot he converted. Again – that’s not playing the game and it is “yellow”. For her long term happiness, he has to break free, but although it doesn’t break her spring, it bent it severely. I found myself with tears in my eyes when one of her dear old uncles spoke of her in this way – poor Dinny. In the final novel, sister Clare is in for a hard time. Out in Ceylon, her husband has been sexually perverse, something to do with a horsewhip, and she leaves him, meeting a nice young fellow on the way back. Of course hubby wants a divorce, since she won’t return, and within the family, divorce isn’t really playing the game.

There is a touch of the soap opera to these tumultuous times, but much more than that, Galsworthy is taking a look at the things that the English of 1928-1932 really hold as their values, and the ways in which they’ve changed. But his younger generation have such great people within it that maybe these changes won’t destroy the fabric of society. I think the other really great thing is that his characters are not portrayed as black and white (well, maybe he goes overboard with the white). Wilfred is a complex man; Clare’s husband could have been just a monster, but he’s not and another fellow, Jack Muskham who bullied Wilfred, has his good points.

There was a cute reference to Dr Johnson. I thought it was funny enough that the two gardeners were called Boswell and Johnson, but it was made even better that once Boswell had been taken on as a gardener, they had to cast about for a Johnson to complete the set.

Posted by NZBarry 17:07 Archived in Ireland