It was with a little bit of sadness I checked out of the Gresham Metropole and hopped into the bus to Galway. Five hours on a bus is not my idea of fun, and luckily Bus Eireann seemed to be aware of that: they chucked us off the Galway bus in Limerick and made us wait for another.

After I got established in my hostel, I ran into a problem. They very kindly gave me directions and a map to help me get to what they said was a good place for coffee, but half the streets in Galway have no signs. So that's what the U2 song Where the Streets have No Name is about. Makes it hard to get about - eventually I found the place I'd been sent to, which turned out to be a cute French bistro. Galway was completely chocker, full of people in for the Volvo Yacht race - the boats are in town for a couple of weeks and Galway's turning on the party. I was in the laundrette and overheard someone travelling with the yachts: of all the places they're visiting, Galway is by far doing the most to make their arrival an occasion. Not, it seems, that Galway needs much of an excuse: guys in my hostel were talking about coming to Galway to perfect their serious drinking habit.

I found the whole place far too packed to be comfortable - I couldn't walk around without being bumped into, and trying to get a spot for dinner in anywhere that looked decent was impossible. Around 10:30, I finally succumbed and went for some chicken'n'chips at Supermac, where the person serving seemed to bark at me and all the staff scowled there way through the night. To make matters worse, two guys spent most of the night outside my window accosting all passersby. It was a little amusing, in that one guy sounded just like James Nesbitt (the fellow in Cold Feet) and the other like Billy Connelly, but still I was geting more and more uptight the longer I was in Galway. And I'd booked for a week!

I was considering doing my dough at the hostel, and finding somewhere quieter - even a hotel would have let me hole up - but had the brainwave of asking the hostel if I could shift my booking to another. And so I came to spend most of my Galway time in the Burren.

First, though, I had a night booked out in Clidfden, out through Connemara on the coast. It was nce seeing Connemara as we whizzed through on the bus, and Clifden was almost completely as I remembered it, a nice wee town set out in a triangular pattern 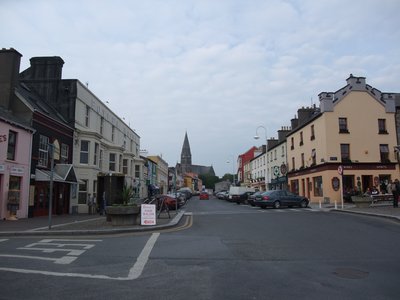 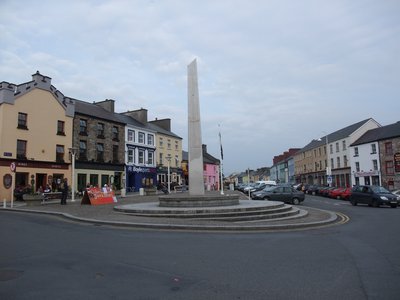 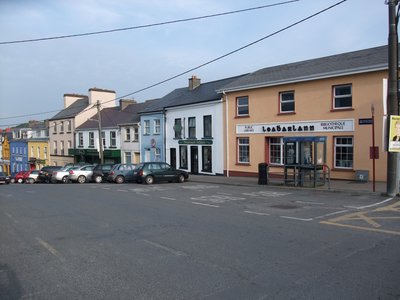 with a tail leading off to its "beach" 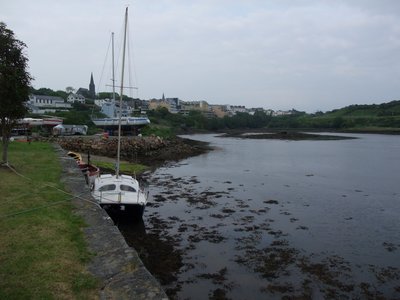 After I'd wandered around a bit, I had my heart set on salmon for dinner, as it seemed to be everywhere. I think I made a good choice, in the very modest EJ Kings hotel, in its third floor restaurant. Modest because, despite being started in 1820, they say they are "over 100 years old". Really good dinner. I was sitting outside, enjoying the last remnants of the sun, about 10:00, when this charming couple, up from the country and dressed for a visit to town, he was in a suit, she in some sort of eveing dress, sat with me for a bit and wanted to know all about New Zealand and my travels.

To get out to the Burren, I had to go back into town and catch a bus that went south along the coast for a bit. The Burren is a very odd piece of land - hills which have been denuded of their vegetation and soil, and just have crowns of limestone. I tried for some photos, but taken out of the bus window, they weren't so hot. 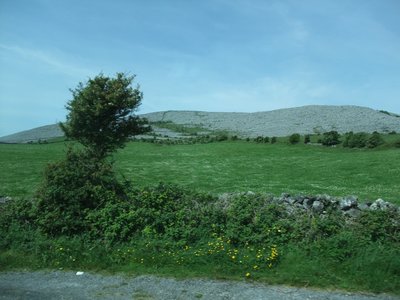 There were lots of wee cottages with thatched rooves - again, my efforts to take photos failed: I tended to get the tractor parked nearby rather than the house. Some worked, however: 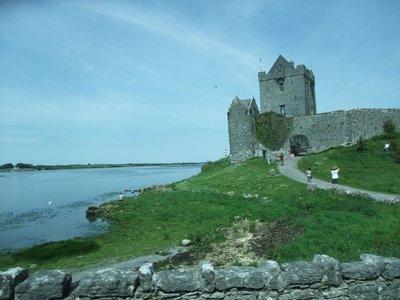 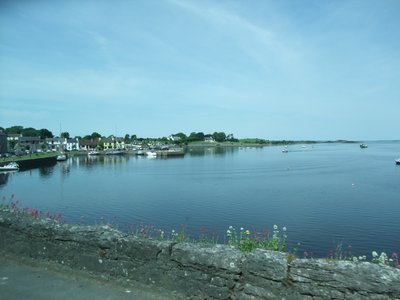 Stone fences prevail - I think that each of these blocks were farmed by an individual crofter, to give him and his family a subsistence living. When I was here in the 80's, I remember a lot of them becoming unoccupied, simply because they were of no use to anyone. 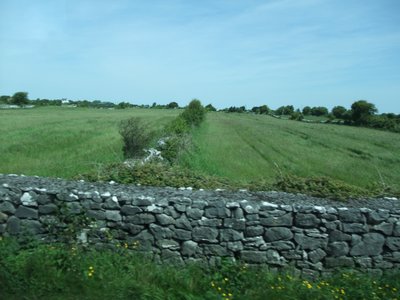 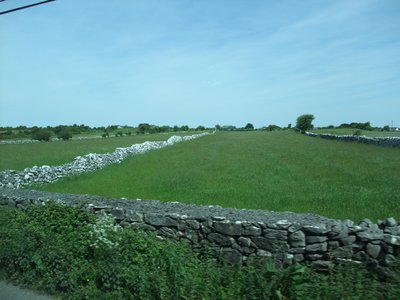 My actual destination is a town called Lisdoonvarna - six hotels and a gift shop and that's about it. Oh, and the spa. I actually saw a movie about this town a while ago - it has had an annual match-making event every September for more than a century. 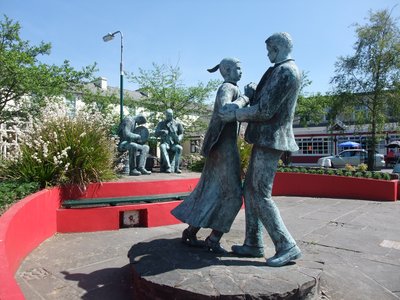 So, of course all of the hotels are plastered with banners promoting that, and promising "weekday dances" [so long as you wait until September]. It has the dinkiest wee library 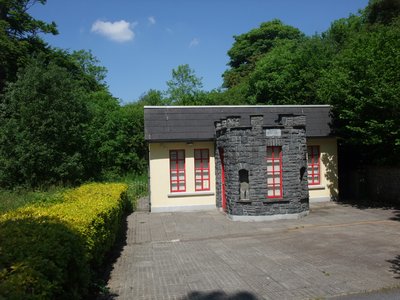 The hostel is a former hotel 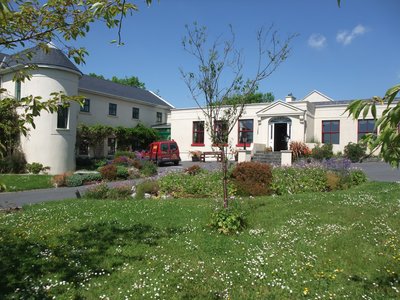 I had a really great time in Lisdoonvarna - the hostel was very peaceful, with a group of young Frecnhwomen hanging about chatting quietly to give a touch of sophistication. I even cooked. Town was a two minute walk away, where I could repair for a decent coffee twice a day. Incredible weather, 25 degrees every day, and long evenings - I found it very pleasant to sit outside until after 10:30, when the light finally faded. When I checked out, I had to tell the fellow its the best I've been in.

I did venture out for one day - through this odd town called Doolin. It seems they couldn't work out where to put it, so just flung it about on the side of the hill facing the coast. My objective was the Cliffs of Moher. 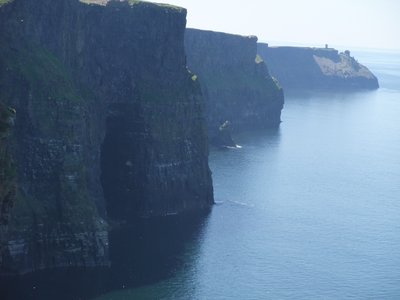 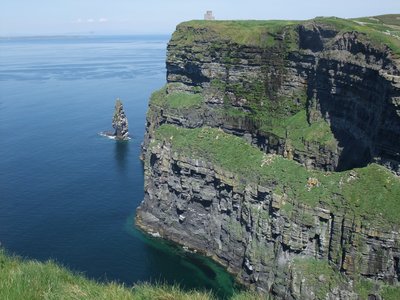 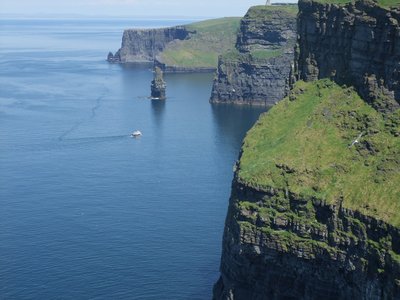 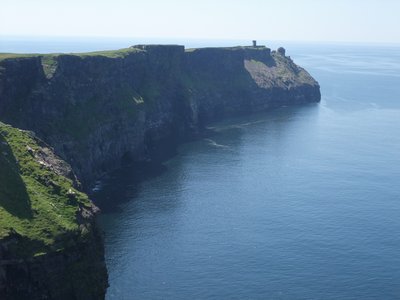 I didn't quite make it to the very end, as I had a bus to catch and really didn't want to miss it. Plus I had to visit the gift shop 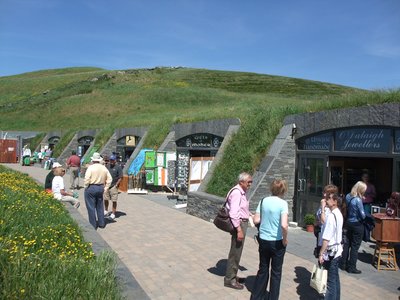 Further round, the information centre and restaurant are fully underground.

Reading for the week was a brand new book the Guardian reveiwed a wee while back, by Richard Milward: Ten Story Love Song. The Times said of his first book, Apples, that it was a celebration of teenage immorality. I haven't read it, but in his second book, his post-teens are growing up and finding value in old values. It was curiously like the The Forsyte Saga, if you could imagine it set in a tower block in early 21st century Middlesburgh. Bob the Artist (the author is one and all) is the central character and a bit of a sweetie, although he spends a lot of his time doing multiple drugs and painting while in that state. An example of his innocence: a london gallery wants to show his art and bring him to London. He goes to McDonalds for lunch, and then remembers he's on expenses. His blow out? Another burger, and maybe an ice cream. Plus there is his yearning to be back home, with his girl. There is an enormous amount of drugs and violence in this book, but ultimately, it is a comedy, in the traditional sense.

Posted by NZBarry 19:55 Archived in Ireland