People flying from Dublin to JFK get quite a sweet deal, really. First off, when I booked, it was a LOT cheaper to fly from Dublin to JFK than from London, in the order of it being half the price. Then there is the fact that while you wait for your plane at the airport, some smiling representatives of the US Immigration service are on hand to process your entry into the USA. You get to JFK and find that all you have to do is hand a form to a fellow waving a similar one at you and you're done. No search, no X-Ray, not even a question about your intentions. Sweet. But the best thing about leaving from Dublin is that if you know Richard or, as in my case, his brother or maybe even if you pretend to know someone who knows Richard, he'll be there to ease your passage out of the country.

He took me on a pub crawl, told stories, got me drunk, in the same pubs as James Joyce and Flann O'Brien had undoubtedly got drunk before me, he ferried me about and took me into his home and fed me and was a very generous host. Thanks, man. I'm on my way to see someone else who is going to be playing host, and he set the standard high, but I venture hopefully. After all, she has indicated the possibility of sailboating, of crabs and the absolute incontrovertible fact of truckloads of beer in the streets.

It was nice to have a bit of a leer up in Dublin, to be still out when the bars were closing around us, even though it seemed very early at 2:00 a.m. Travelling by myself, I'll go and have a drink, maybe two, but for a long mission company is needed. An odd thing happened, twice on the night out. In one pub this Frenchman told me that he'd seen a mural of the band The Dubliners, and as he fingered my beard, he told me I looked just like one of its in and out members, Ronnie Drew. Poor fellow - he was very earnest about how we Irish were so great, and that there was a deep spiritual connection between the French and we Irish people. We didn't have the heart to put him straight. In the last bar of the night, an American woman could have easily been convinced that I was Ronnie Drew. As I had been until about an hour earlier, she was ignorant of the fact he had died.

On the Saturday, it was time for another pilgrimmage, but this time without the beer. My destination was a lot smaller than I imagined 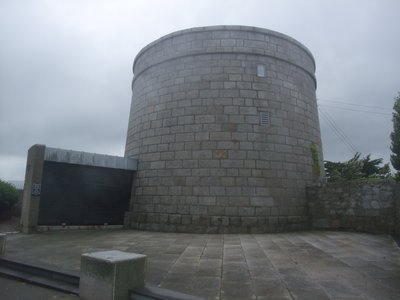 and I wondered about how "stately, plump Buck Mulligan" managed the stairs. 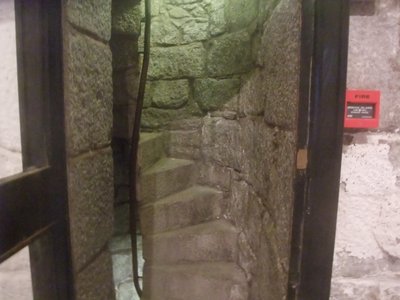 This is the famous Martello Tower at Sandycove, in which the first chapter of Ulysses is set and where James Joyce himself stayed for just under a week - he didn't take too kindly to being shot at by his friend, apparently.

The room has been set up as described in the novel, 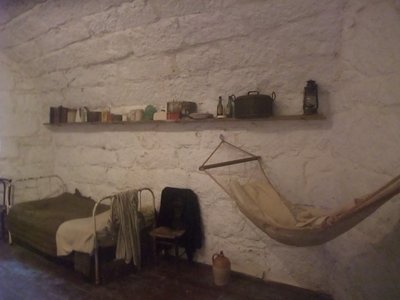 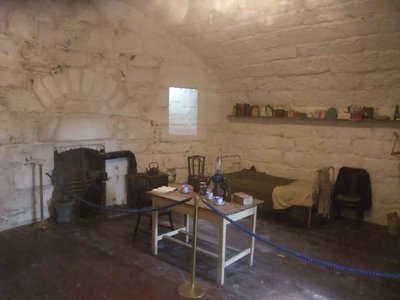 except that the black panther in the fire place was just a dream.

There were two plastercasts made of Joyce's face when he died. This is one of them 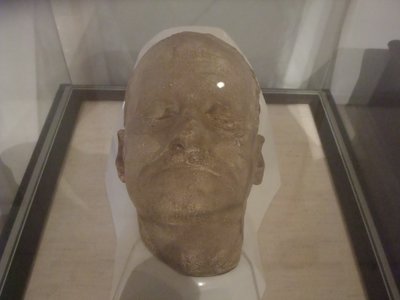 After the fabulous weather of last week, it was a bit of a shock when it turned miserable. I left the hostel in my shirtsleeves, thinking it was just a bit of drizzle. Within a couple of blocks, I was thinking I should find an umbrella. By the time I was half way down O'Connell Street, I was so desperate I bought an umbrella from a gift shop. By the time I was at Connelly Station, it had turned itself inside out three times (the umbrella, that is, not the station) and its frame was bent so I biffed it away in disgust. Only then did I remember the toasty warm raincoat I could have gone back for.

There was an upside, however. By the time I got down to Sandycove, the rain had gone off and the wind trebled. As someone said to me "there'll be no swimming in this": 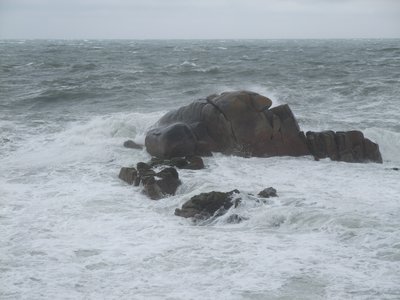 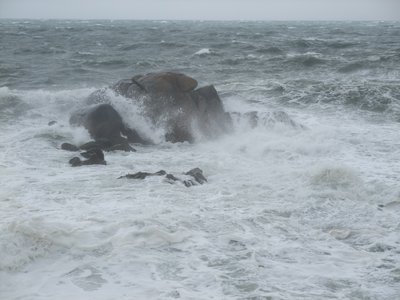 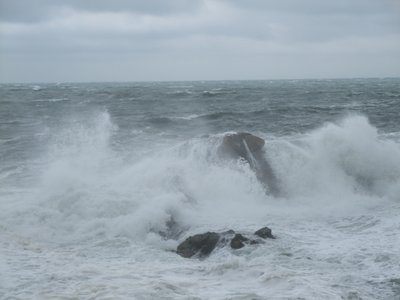 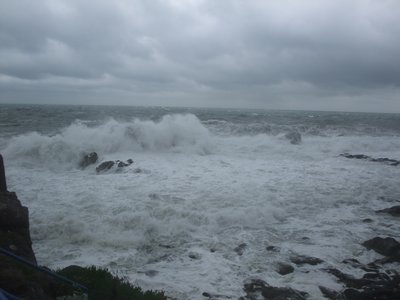 Funnily enough, I walked around the point and someone was swimming, and another fellow was heading out in a kayak. Into this 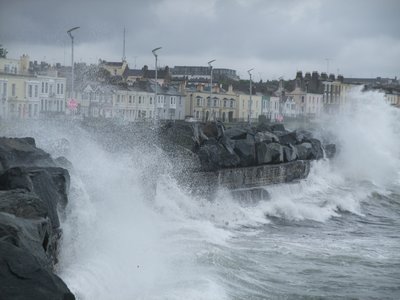 Not so funny: as I left, I noticed the lifeguard getting very anxious, then running to his wee shed, extracting binoculars and running back to take a look. I hope it was nothing, but I did notice a human head bobbing in the waves.

Posted by NZBarry 22:15 Archived in Ireland