The flight over on Aer Lingus was pretty average, just as my researches had led me to expect. There was an unfortunate juxtaposition of myself between a number of babies: one would cry and that would set off a chain reaction, culminating in me wishing that airlines made special provision for parents travelling with infants. At my most aggravated, I would have been happy to see that take the form of having the wee darlings sit on the wings, but when I calmed down, a more reasonable solution came to mind – an area could be made separate and made into a quasi nursery, with cots for the tots.

The captain seemed to like telling long lingering tales about our arrival time – with the lack of headwind we’d be half an hour early into JFK but then he had quite a list of reasons why that time might get cut down. As it happens, we arrived dead on time. I had not made arrangements for onward travel, as I’d heard horror stories about how long it would take to get out of JFK. After collecting my bag, I was outside in two minutes! Outside, there were a couple of women touting for business for the buses into town: I was impressed that someone had the nerve to approach one to borrow her cellphone to call someone about a ride. Even more impressed to see the phone was actually lent.

I had a succession of commuter trains to catch, 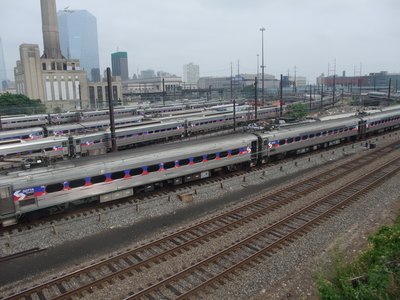 Although the temperature was less than 20 degrees, it was so humid that by the time I hit the hostel, I was asked if it was raining outside. It took a couple of pints of Samuel Adams to recover, then the hunt for my first dinner in the USA (since last year, that is) was on: America does food well and I wanted something nice. Unfortunately the place I picked sounded good, a roast beef palace, if you like, and the beef was nice but the microwave was a wee bit over-used.

I only had one full day in Philly, with no real plan except a feeling I should check out the Independence Mall - not actually about shopping but history. Philly has it in spades, thanks to a couple of bits of paper signed here a while back - the Declaration of Independence to name one, in this building 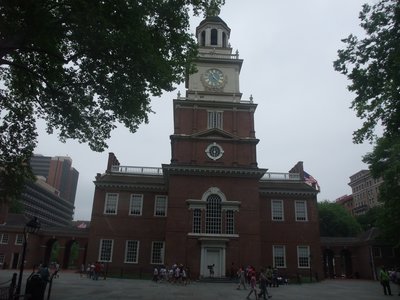 and it was the centre of US government for a few years. I took a good look at the display set up in the information centre as to what was on offer, and didn't feel any need to do anything but wander around the precinct for a while. Here is all that is left of the house occupied by Jefferson when he was President - the blue lines, not the handsome buildings to the rear 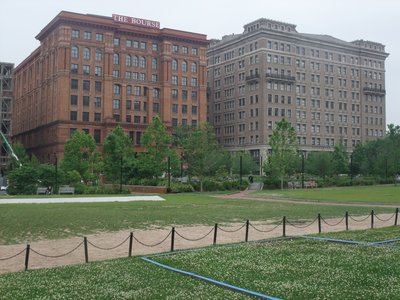 Horse drawn carriages are available by the dozen 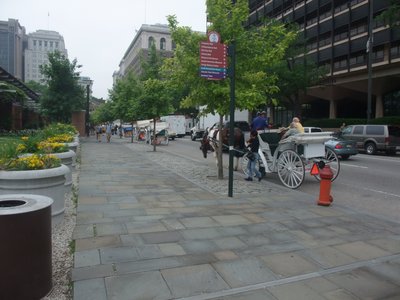 Eating became important, so it was time to go to Reading Market, something I read about in the Guardian. 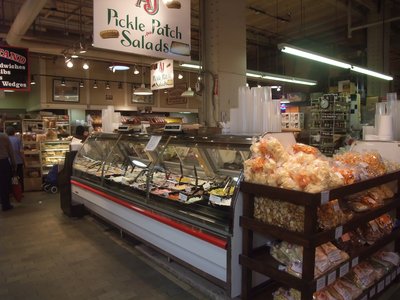 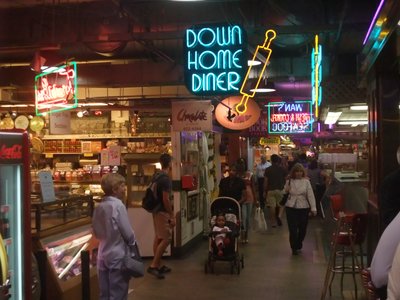 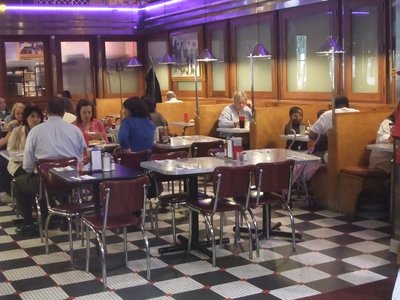 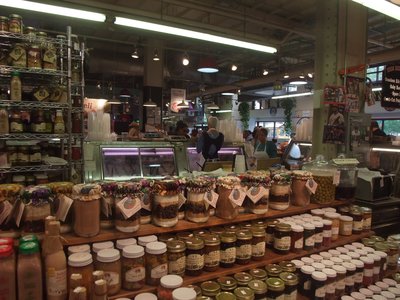 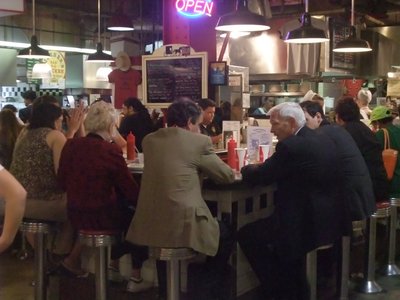 I was a bit bamboozled by all the choice and by the time I snacked on a couple of donuts and had a cinnamon sugar pretzel, in no need of lunch anyway.

My wandering walk took me past the magnificent City Hall 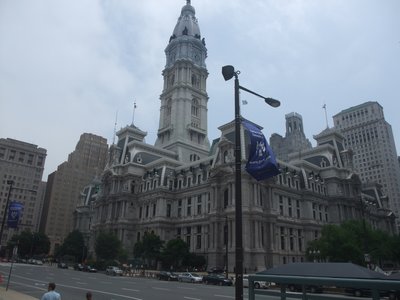 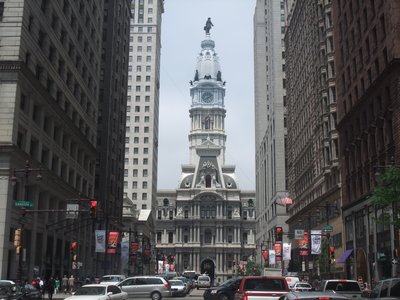 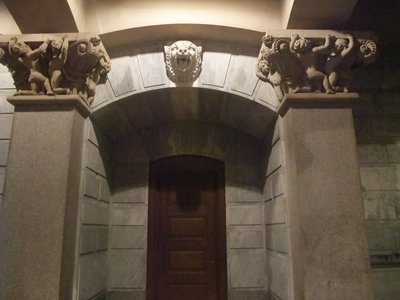 Ben Franklin was nearby, doing his thing an keeping an eye on what's going on 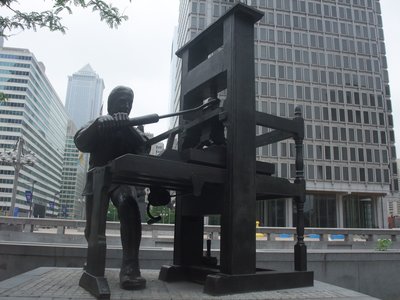 I had a sort of plan, in that I wanted to check out the main Art Gallery. Unfortunately, I had failed to find out where it is, so after a long walk along Philadelphia's version of the Champs Elysees, past the library 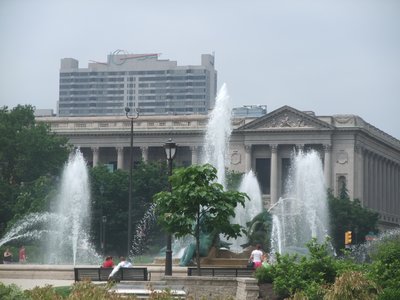 I finally got there about an hour before closing time. Since it is so large 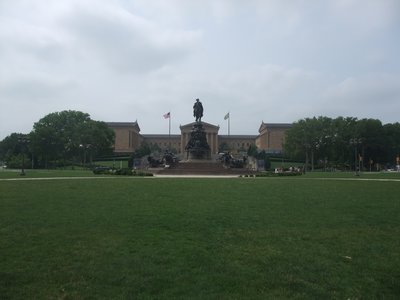 and the entry fee a little steep, I took a shot looking back into town 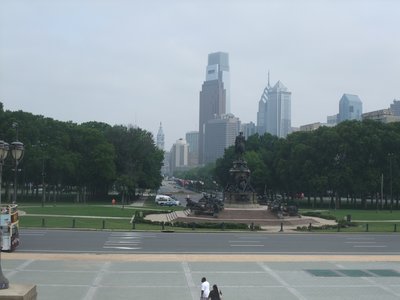 and headed off in what turned out to be the direction of the railway station, where I enjoyed the classic lines of the interior. 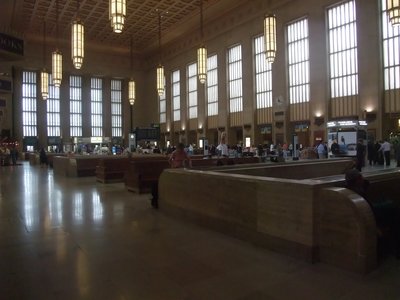 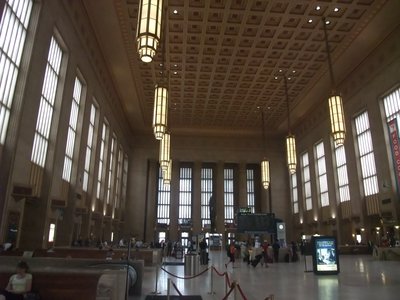 Even more than that, I enjoyed the food to be found in the station - a marvellous chicken bisque given life by the addition of green chillies, jalapenoes, garlic and coriander then, in another stall, juicy and very filling ribs - getting four might have been a little greedy!

After the low rise buildings of Ireland and even the UK, I enjoyed wandering inner city Philly, as the tall buildings really evoke a big city feel. Not sure that I feel any pull to return any time soon, however, although I did miss out seeing what is reputed to be its most interesting street, South Street.

Posted by NZBarry 09:29 Archived in USA